Odyssey to Ohio: The Greatest Typewriter Trip, Ever (Part II)

No sooner had we checked into our third-floor room at the Clarion Hotel Morgan in Morgantown, West Virginia, than Richard Polt peered out from between the curtains and declared, full of his customary optimism, “There’s an office supplies store right across the street”. “Sometimes, in a town this size, you might find a typewriter in a store like that.” It seemed like a good omen at the time. But in our elated frame of mine, we momentarily allowed ourselves to forget that this was Herman Price Country.
The next morning hotel reception forgot to give us our wake-up call, but by 8.30 we were ready to rock back to the Chestnut Ridge Typewriter Museum, through the rolling hills of Fairmont. Not before, of course, squinting hard through the windows of the office supplies store. There was not a typewriter to be seen. Not there, at any rate.
My earnest visual hunt through the glass in Morgantown would doubtless have reminded any passer-by of a young boy waiting for the sweet shop to open. Herman Price would later remark of his gathering that I had had as much fun at it as anyone, “like a kid in candy store”. He was right on both counts. Thanks to Herman, it was the most fun I have ever had, even if the candy was just that little bit out of my reach. 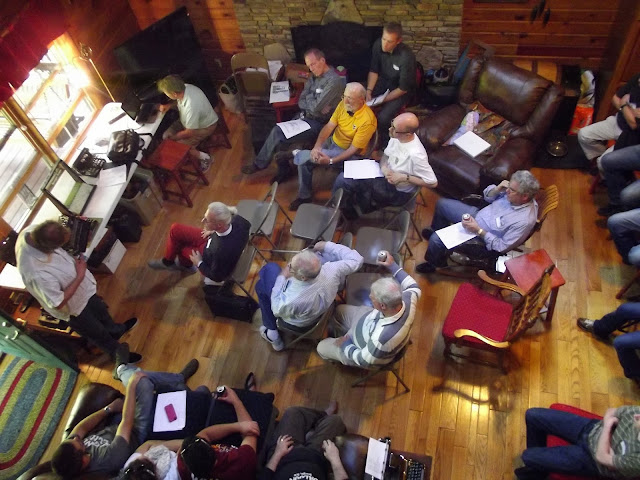 Saturday was always going to be the major day of Herman’s sixth annual Typewriter Collectors’ Gathering. It was to be the day of the presentations, the awards and the competitions. Most importantly of all, it was to be the day of the grand lingering tour through the subterranean maze of the typewriter museum. Given the previous night’s meet-and-greet had flowed on joyously until the early hours of Saturday, however, the 9am scheduled start was never going to be a reality.
Perhaps it was just as well it wasn’t. By dusk Herman was worn thin. One last competition, to select the "cutest typewriter", was never held. Herman had entertained us royally for seven hours solid. He was the master of ceremonies for the presentations, a presenter himself, mine host of the morning and afternoon teas and lunch break, guide for the museum tour, and all the while the joker who kept us in fits of laughter. Upon meeting Herman for the first time on the Friday evening, I had remarked to Richard that he was so like my closest friend. He had that same impish smile, that same twinkle in his eye, that same stentorian tone, that same raucous laugh. When Herman laughed you laughed along with him. He had just cracked another of his jokes, and you had no choice in the matter. Saturday was a Herman Price Tour de Force.
At the 2011 gathering, Herman had run out of steam toward the end as well. Back then, he had put together a quiz for attendees, intending to ask them to name typewriter brands from a list of the most cryptic of clues (even McTaggart got a mention). Herman didn’t get to it at the time and that quiz was put on hold. But he decided to take out the photocopied clue sheets again this year. Trouble is, in the intervening two years, he’d forgotten some of the answers. He was relying on the smart typewriter historians at the gathering to provide those answers, as much as he was on his own memory for the rest. The result was, as one might image, hilarious. 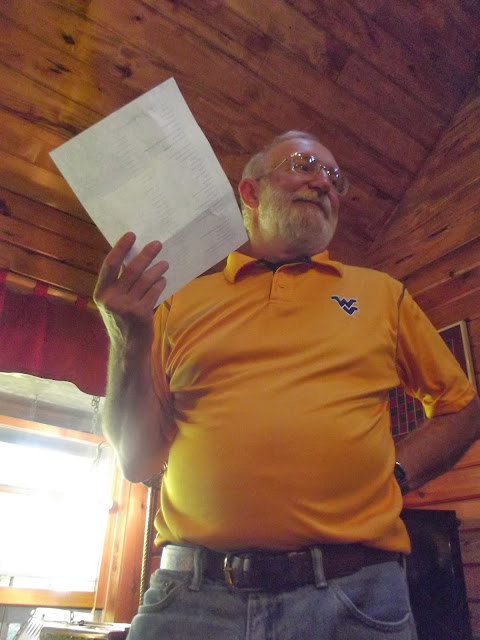 The day started with an award to the person who have travelled the furthest to get to Chestnut Ridge. Naturally I thought I was a shoe-in. But no, it went to Martin Rice, who had, according to Herman, “travelled from outer space”. Herman went on to explain that Professor Rice was “My Favourite Martin”.  I won the award for having travelled the furthest, at more than 8000 miles, in purely terrestrial terms.  Joshua DiMora and Jaden Quigley, both 14, won awards as the youngest attendees. They were also among the first presenters, Joshua giving an interesting talk on how he came by his Remie Scout. By the end of the weekend, Joshua was to return to Rochester with an ex-museum Caligraph, among other goodies. I suspect the Scout might have been trumped. 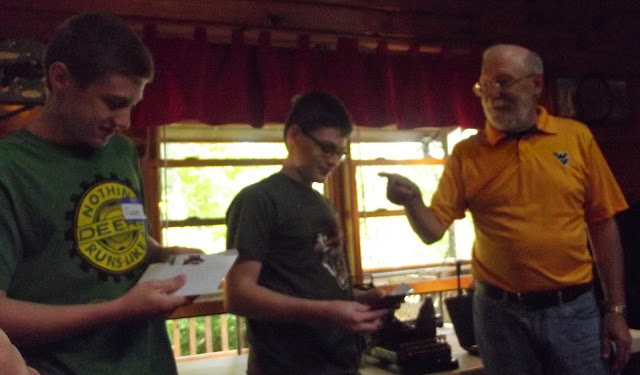 Jaden, left, and Joshua accept their awards
Peter Weil gave us some glimpses into his vast collection of typewriter ephemera, with presentations about portable marketing tools used by Remington in the 1920s and Royal in the 1950s. Later, Peter was called back to centre stage by Richard Polt, who as the 2012 winner, presented Peter with the 2013 QWERTY Award for his contributions to typewriter collecting and our collective knowledge of typewriters. Peter is the ephemera columnist for ETCetera, an expert in the area of the history of typewriter marketing, and one champion guy. 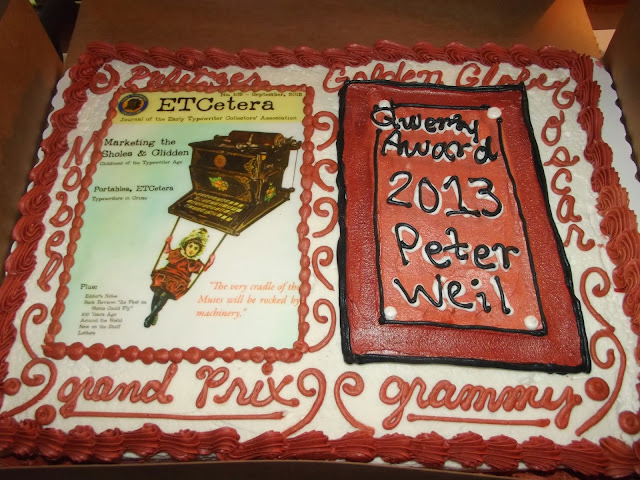 Another cake was made to mark Fritz Niemann’s birthday. Then Richard Polt ran us through the various sections and his ideas for them for his upcoming book on the Typewriter Insurgency. Richard’s presentation included many fascinating images, and someone remarked that the planned cover design showed a marked similarity to the 1992 Paul Lippman book American Typewriters, one of the classics of typewriter literature. I think we can safely say that Richard’s book is destined for the same lofty heights. Later Herman gave us an insight into typewriter reference works, ranging from Mares through Martin to Rehr, Adler and Russo, and on to Dingwerth. I was squirming when he included my Magnificent 5 at the end of his presentation, but he declared it “one fun book”, so that was a relief. Paul Robert was there, all the way from Amsterdam, to hear some justifiable praise for his Blickensderfer book and The Typewriter Sketchbook, as well as, of course, Sexy Legs, which someone jokingly referred to as "typewriter porn". 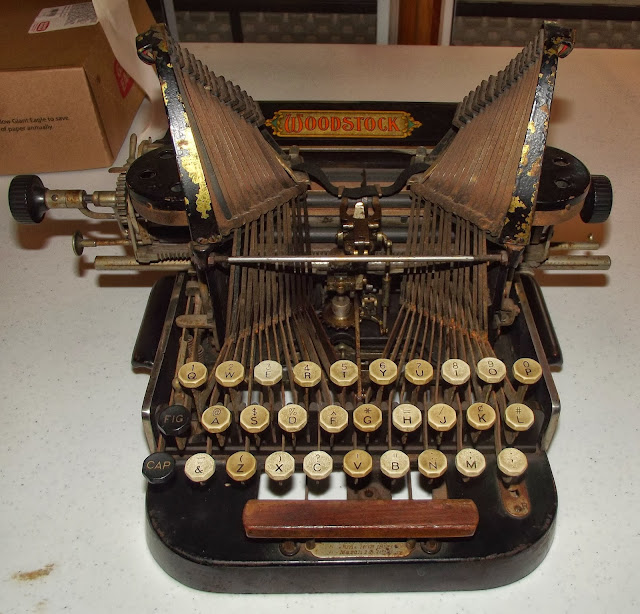 Another author attending was Jett Morton, an authority on Oliver typewriters. Jett has now started college, but he was as young, if not younger, than Joshua DiMora and Jaden Quigley when he first started attending Herman’s gatherings. Jett gave a wonderful presentation on his Woodstock Oliver. 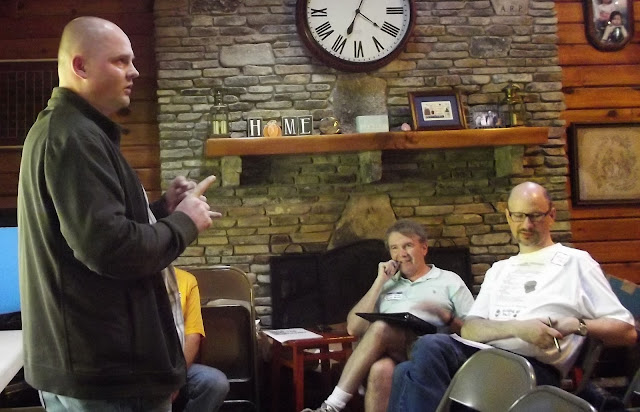 I felt strangely flattered when Greg Funacz (above) said that since “Polt and Messenger would be here” he brought along his brushed strained steel Royal. Greg also spoke about some Royal war service badges he had come across. Alan Seaver told the unwaveringly entertaining story of how he acquired his magnificent sterling silver Corona Sterling. As show-and-tells go, it was hard to beat Alan’s Corona, Greg’s Royal, Jett’s Oliver or Peter’s Remington and Royal. And although Martin Rice did not actually bring along his Oliver with its very special desk (too large and heavy to transport to Chestnut Ridge), his video presentation had the audience enthralled throughout. At the end of it, Martin zeroed in on the camera, put on his best imitation of a leering, sneering Jack Nicholson in The Shining, and said, “Are you jealous?” Of course we were! 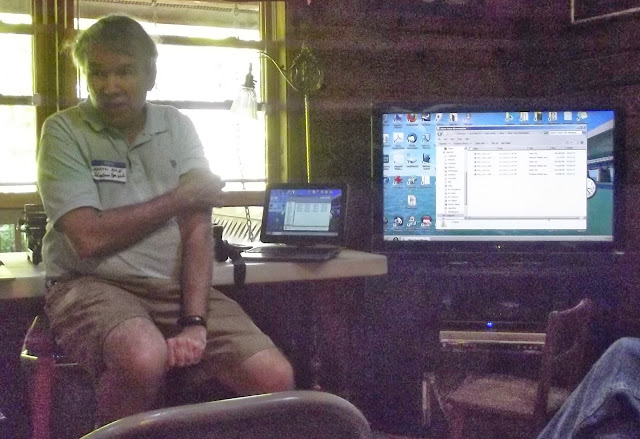 Martin’s demonstration of his typing on the Oliver was the cue for Gabriel Burbano to switch on his typing metronome. It took a while to settle on Martin’s typing speed, but from memory the metronome clocked it at about 65 words a minute (or perhaps a little more?). Gabriel later gave us a look at another fascinating mechanical device, a machine which, according to the consensus of the meeting, was designed to test typewriter ribbon, by rapidly typing on a roll of paper eight-letter lines with a short strip of ribbon. 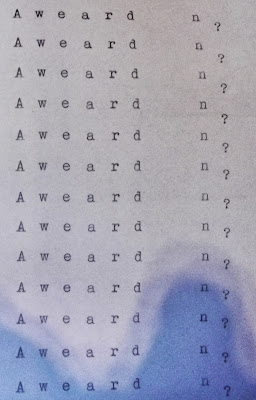 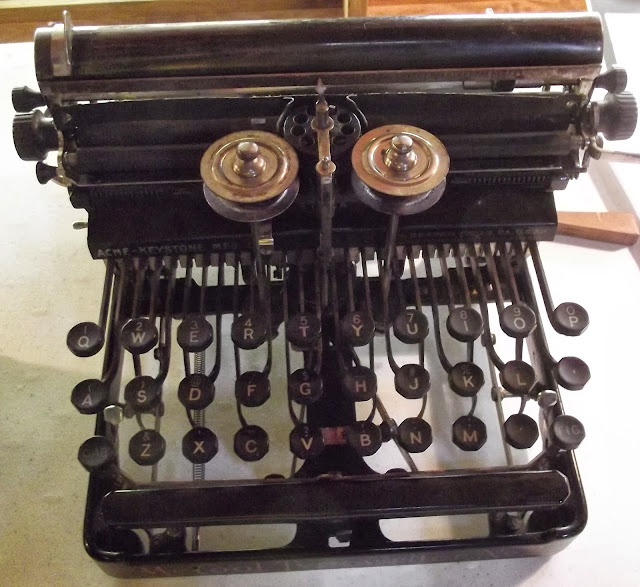 Another avid young collector present was Maddie Allen, who was both a clue in Herman’s cryptic quiz and a presenter, talking about her fine McCool. Paul Robert presented an Underwood USB typewriter, which he later donated to Herman’s collection. That collection was the subject of an extensive afternoon tour, which took in what seemed like thousands of beautiful old typewriters. 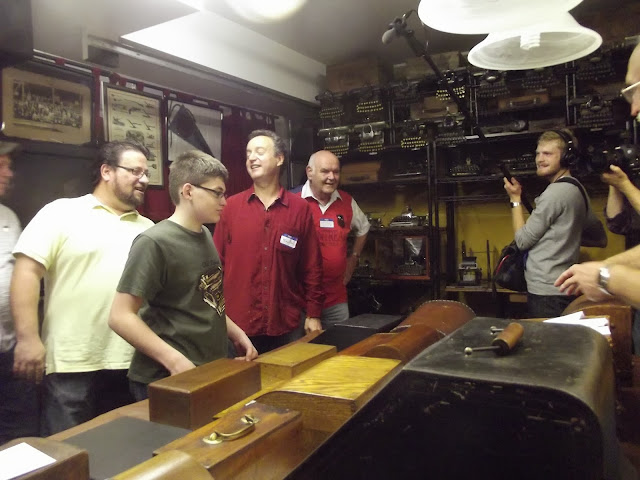 The day ended with one final competition. Herman had laid out on his pool table downstairs 16 typewriter cases, and contestants had to guess what machines sat under each of them. Poor Richard Polt, considered a bit of an expert in this area, was handicapped five points before the event even started – but I think he still won it anyway. Martin Howard no doubt gave him a run for his money, as would have Jim Rauen and Mike Campbell. These are men who have seen many a great typewriter and many a great typewriter case in their time. Jim alone owns 12 Sholes & Gliddens. 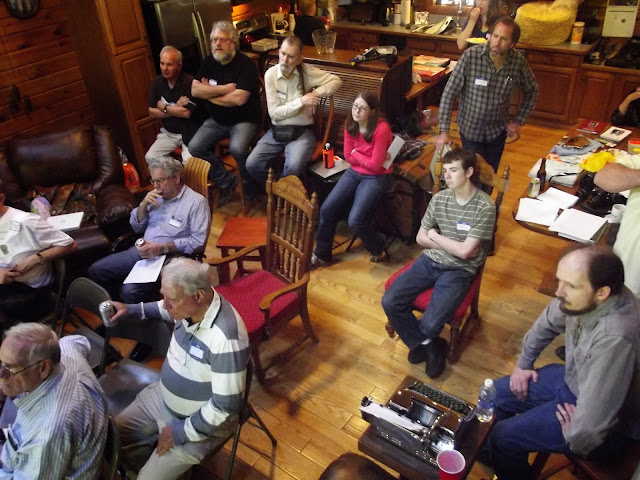 Ever tried to imagine what it would be like to be transported back in time, to 1893, to the Chicago World’s Fair, the Columbian Exposition? The walk into the Typewriter Pavilion and see row after row of magnificent, gleaming machines? To walk among the giants of the industry, to sense their pride with their wondrous works? No? I couldn’t either. That is, not until last Saturday, when I walked through Herman Price’s Chestnut Ridge Typewriter Museum. It was an experience I shall never forget.


NEXT: Day three – Will Davis dissects the Visigraphs, the Remington Standard No 2 v the Remington Perfected No 2, the auctions, the final round-up. The farewells. 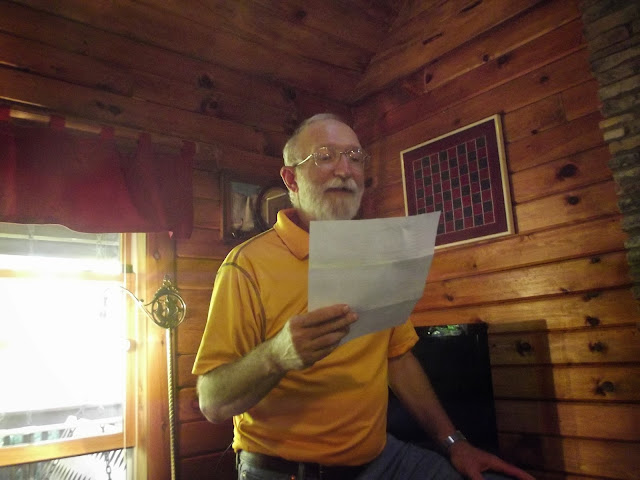 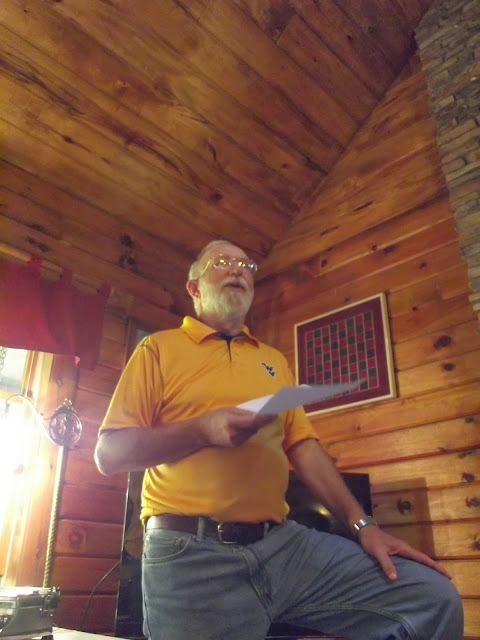 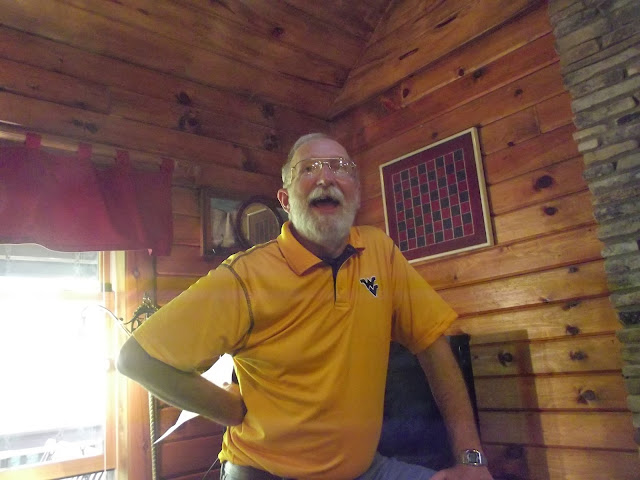 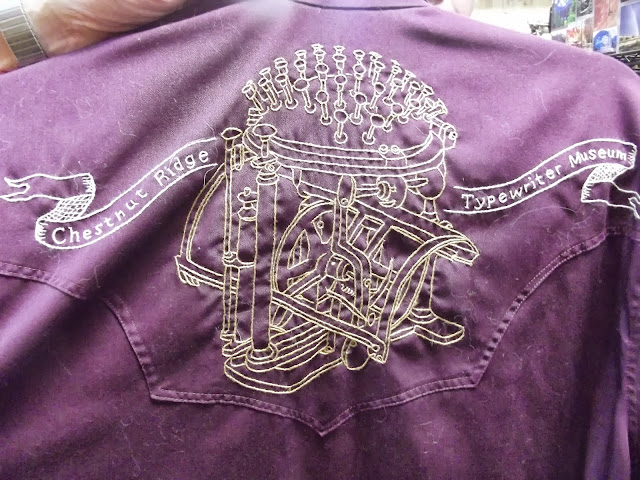 This post gives a great sense of what the gathering was like. It also makes me want to meet Herman Price - heck, all of the typospherians present. It's nice to see men and women, young and old in the group. Jett's Woodstock Oliver is a beaut.

Heh, it's weird seeing that Jett Morton isn't the youngest one there anymore :D

Another great report of the activities. Makes me really wish I'd been there to see the folks I visit each day on the intertubes.

I see there was a fellow with some sound equipment (microphone boom) there - was the event filmed/recorded?

Thanks for preserving the event with all the photos and commentary! I only took a few photos myself generally (but a number of the Visigraphs!) -Will Davis

Robert all I can say is thank you for the fine report and all the great photos.

A very thorough report on a wonderful day!