Mail from the Typosphere 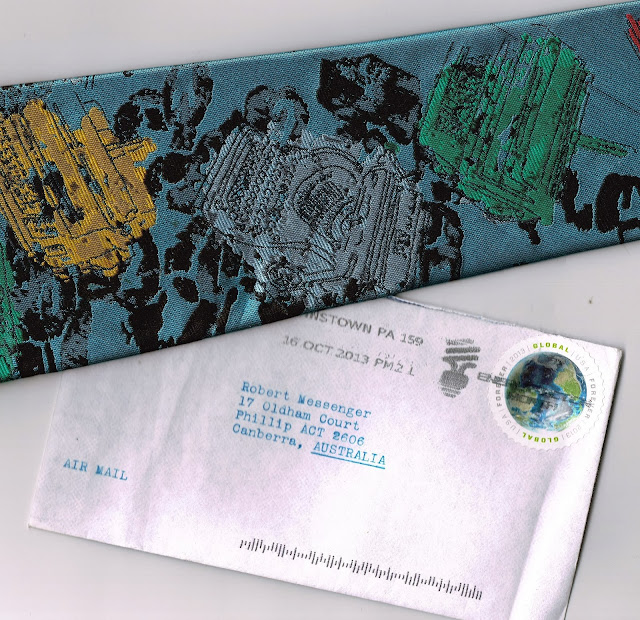 It seemed I was barely home in Canberra from Cincinnati than two items arrived through the post from two very special people that I had met at Herman Price's Typewriter Collectors' Gathering at the Chestnut Ridge Typewriter Museum in Fairmont, West Virginia, 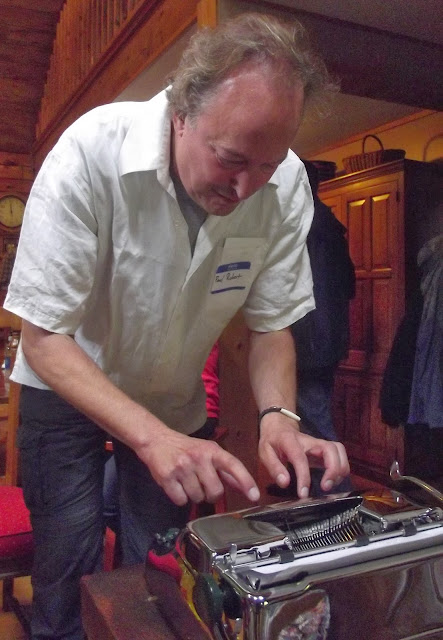 Paul Robert signs in on a Dean Jones-chromed Corona.
One contained a gorgeous Olympia typewriter tie from Paul Robert in Holland and the other a charming letter and business cards from Martin Rice in Johnstown, Pennsylvania. 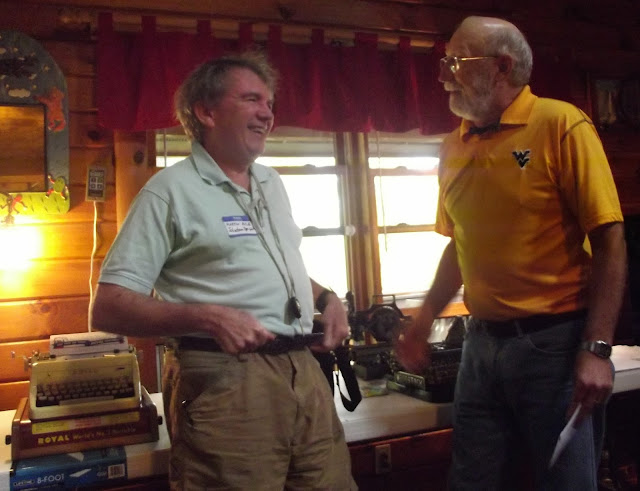 Martin Rice accepts an award from Herman Price for having travelled from Johnstown, Pennsylvania.
Yes, Georg, with Paul's Olympia addition my typewriter tie collection continues to grow, at an impressive rate. At Herman's gathering I had given away about a dozen typewriter ties I had had made here in Canberra during the past couple of years. I only ever get four made of each particular design, so there are now just 20 in existence in the world. A very exclusive "typewriter tie" club which at one time included myself, Richard Polt and Richard Amery now also embraces Paul Robert, Herman Price, Martin Howard, Will Davis, Alan Seaver, Peter Weil, Martin Rice and Mike Brown. We few, we happy few of 11, we band of brothers - bound (that is, tied) together by typewriter ties! 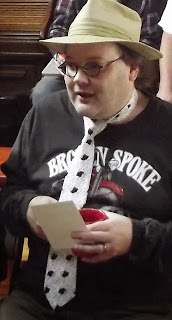 Alan Seaver, above, and Martin Howard proudly wear their choice of typewriter ties in West Virginia. Richard Polt has also been known to wear his tie, as has Richard Amery (below) 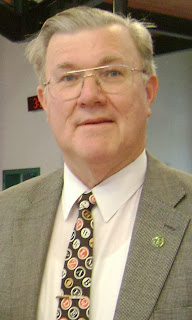 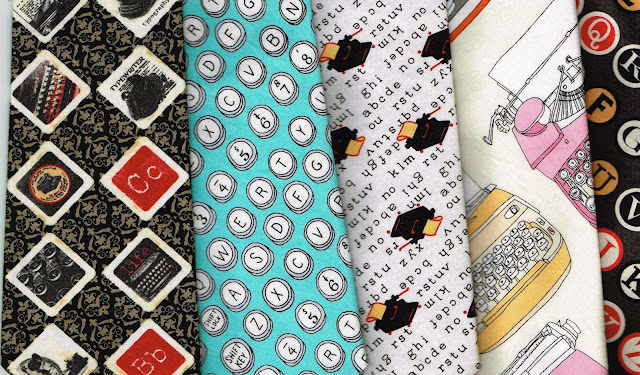 The five designs of typewriter ties I have had made up.
Anyway, at the time I gave Paul a tie in West Virginia, he told me he had one,  a very nice Olympia tie, at home in Holland, which he would send to me. Unsurprisingly, he has proved to be as good as his word. 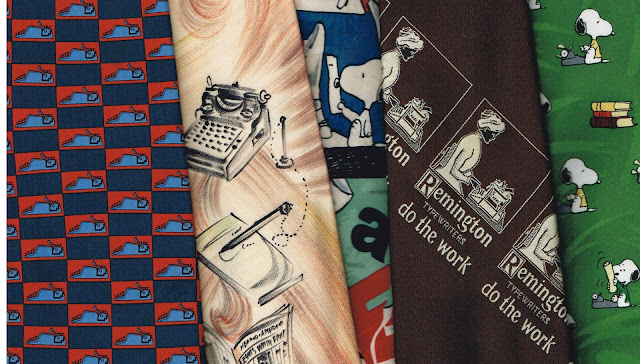 Some other special typewriter ties.
Of all the wonderful people I met in West Virginia, Paul was perhaps the only one I did not recognise instantly by sight. But it only took me seconds to realise who he was. When I put together a post before my trip to America, I included images of the people I was so looking forward to meeting, people with whom I had exchanged emails and letters over so many years. I could not find a good image of Paul. The only one I came across was from a group shot taken at the typewriter collectors' gathering in Philadelphia in 2000: 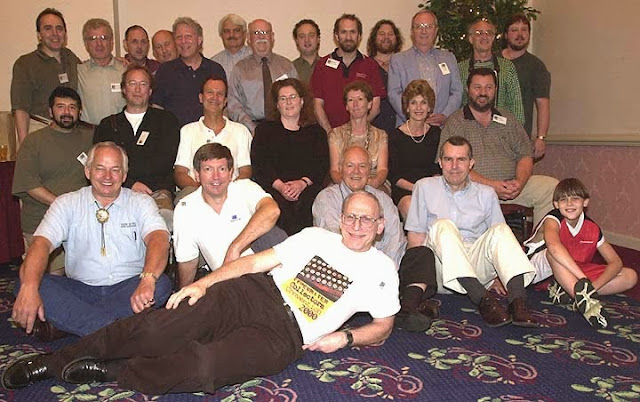 This image is from coverage of the 2000 Philadelphia typewriter collectors' gathering on Chuck Dilts' and Rich Cincotta's Antique Typewriter Website and Museum. Of those in this photo, only Mike Brown, Peter Weil, Martin Howard, Mike Campbell and Paul Robert made the same event in West Virginia 13 years later. Herman Price, Dennis Clark and Jim Rauen were also at the 2000 gathering - the previous occasion on which Australia was represented.
The caption for this image reads - Back row: Tony Casillo, Uwe Breker, Mike Brown, John Ziegenhagen, Peter Weil, Jack Knarr, Ray Thomas, Martin Howard, Mike Campbell, Bruce Boyd, Jan Beck, Hoby Van Deusen, Chuck Dilts. Middle row: Rich Cincotta, Paul Robert, Fernando Costa, Susan Howard, Jann Dorothy, Lin Lewis, Rick Spadaro Front: John Lewis, Don Hoke, Angie Jimenez, Dave Lewis, Jason Brown. In front: Jay Respler.
As with Richard Polt, Paul's tall stature took me momentarily by surprise. At least Richard had warned me he is 6ft 7in tall. Paul is not quite that tall, but I think it's fair to say he and Richard probably stood head and shoulders above the rest of us (Jim Rauen stands pretty tall in the typewriter collecting world, too.)
I only found out a few days before going to the US that Paul would be at Herman's gathering. Indeed, I wasn't even certain when I posted about my upcoming trip that he would be there. Knowing for sure that I would meet him in West Virginia heightened my anticipation for the trip considerably.
Paul is a delightful man, great company, warm and constantly full of good cheer and typewriter knowledge. His telling of the story of how his book Sexy Legs and Typewriters came to be published was memorable. 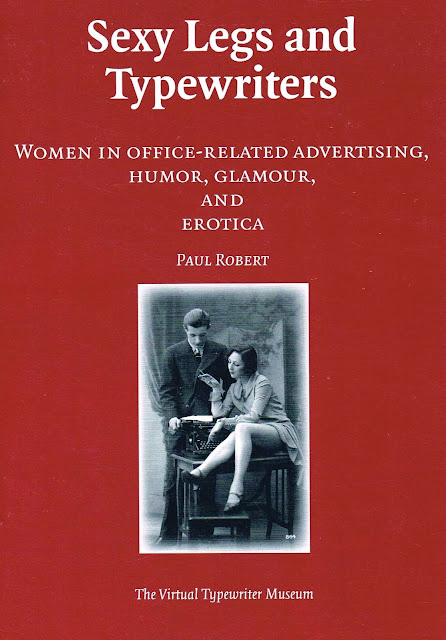 As might have been expected, Martin Rice wrote his letter to me on an Oliver Typewriter Company letterhead using an Oliver typewriter (with blue ribbon!). Indeed, it was the very Oliver that Martin had so proudly demonstrated (via video) at the Herman Price gathering. Martin never misses an opportunity to promote the virtues of the Oliver! 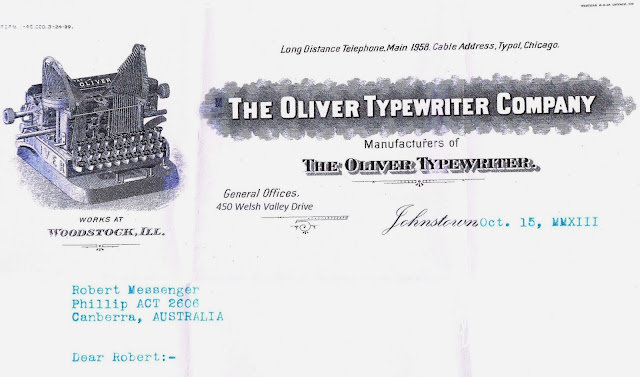 I found Martin an absolute delight and also great company. He is bright and bubbly and full of fascinating conversation. One evening we sat out the back of Herman's place with Mike Brown and Herman Kerz, drinking beer (at least one of us was, me!) and tossing around thoughts of Hemingway's typewriters and his cats. I very much liked the way Martin was so open to other views on these subjects - I hadn't expected that to be the case, considering his blog post on his visit to the Hemingway home in Key West, and his disillusionment, at the subsequent hands of Jack Knarr, of what he found there. 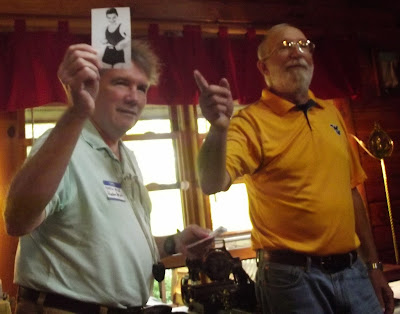 "I can definitely assure you," says Herman, "that that is not Ernest Hemingway. Nor, for that matter, is it Jack Knarr." "No, you're quite right," says Martin, upon further inspection of the photo. 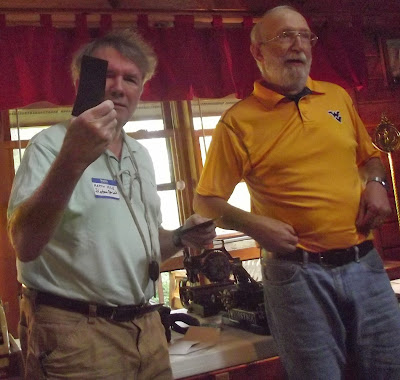 In his letter, Martin has followed up that conversation with some more thoughts on Hemingway - quite controversial ones, I might add. I won't go into those, as that is up to Martin to reveal. Suffice for me to say that, when I came across the suggestion in Vanity Fair some years ago that Truman Capote, and not Harper Lee, had written To Kill a Mockingbird, I wasn't exactly "knockable over with a feather" - my socks stayed on. They remained on when I read of Martin's suspicions. In other words, I wasn't all that shocked, to be honest. 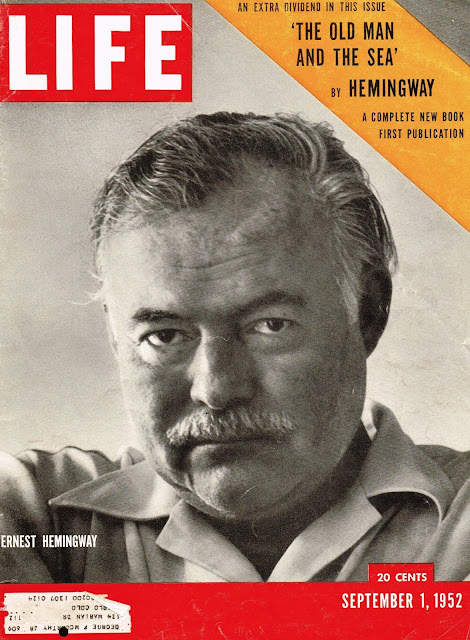 This is Ernest Hemingway
I was introduced to the writings of Hemingway confidant A.E.Hotchner at the height of my Hemingway beat in Spain in the mid-1970s. Since then I have been responsible for making available on the Internet recordings by Hemingway put together by Hotchner and Mary Welsh Hemingway, and indeed featuring Hotchner:
This is Ernest Hemingway
Nobel Prize acceptance speech
Work in Progress
The Fifth Column
Second Poem to Mary
In Harry's Bar in Venice
Saturday Night at the Whorehouse in Billings, Montana
I agree entirely with Martin on at least one thing - Across the River and Into the Trees must surely be one of the worst books ever written by a Nobel Prize literature winner.
I will be (type)writing back to Paul and Martin, I can assure them (as I will Peter Elpers and Tony Mindling). In the meantime, many, many sincere thanks to them for their kindness and their letters and gifts.

Posted by Robert Messenger at 13:58

Those Hemingway recordings are great. Thanks for sharing the links. Hemingway is one of my favorite authors, yet I know little about him.

What a fabulous tie and a fabulous letterhead. Paul and Marty are two gems!