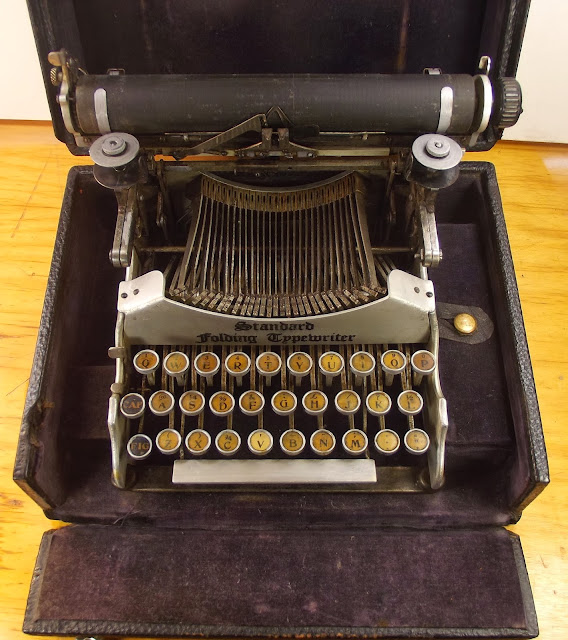 This 1911 Standard Folding Portable Typewriter turned up by courier this afternoon, just as I was making final preparations to begin my trip to Cincinnati. It is a Model 2, serial number 10878 of the 12,000 made. This one was made in Groton, not New York City, and it has the two shift keys both on the left side - unlike the Model 1, which has the shift keys on either side of the keyboard. 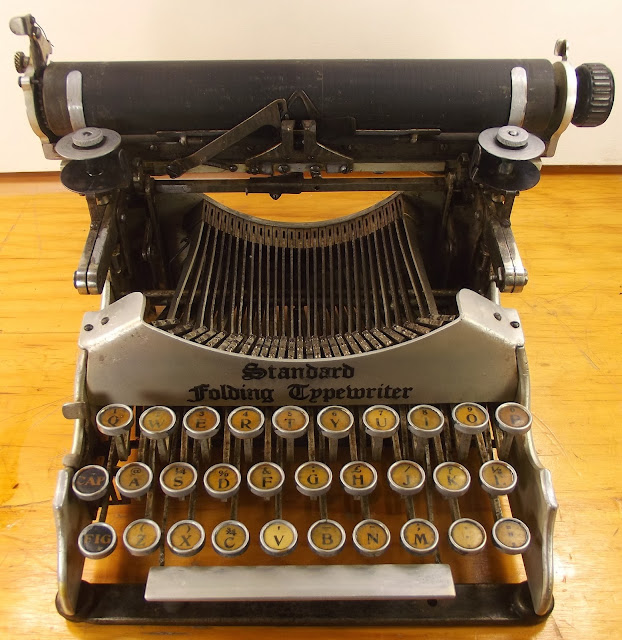 The Standard Folding, the predecessor of the Corona 3, was invented by Franklin Sebastian Rose and patented by him in 1904. Rose died the next year but his widow Catherine and son George managed to get this little aluminium beauty, the first designated portable, into production in Manhattan in 1907. In 1909 the rights were sold for $150,000 to a company headed by New York senator Benn Conger. The change to the Model 2 was patented in early 1910. With improvements and changes made by Otto Petermann, the Corona 3 emerged in 1912. 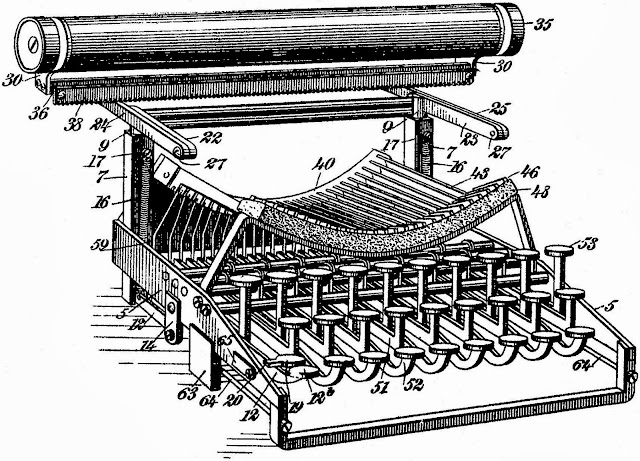 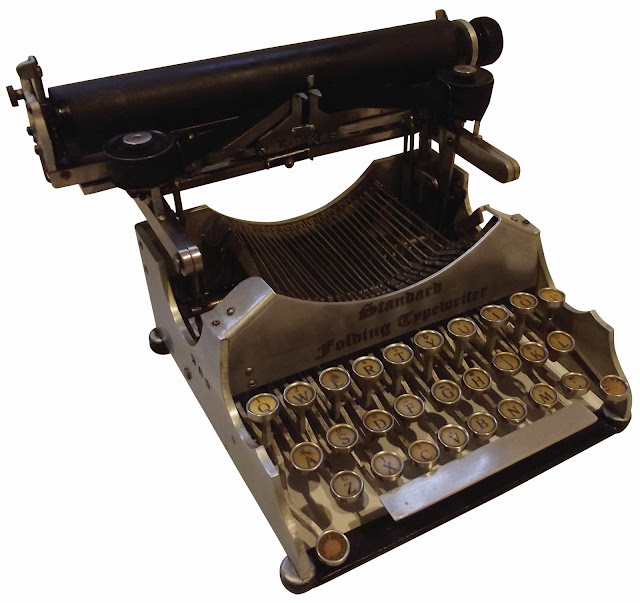 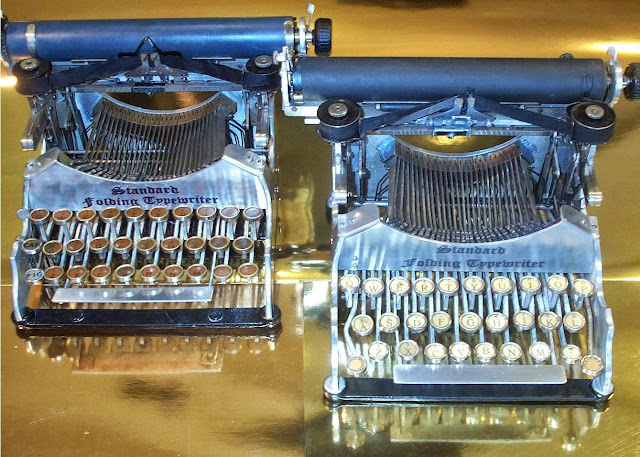 Two of my three earlier Standard Foldings are Model 1s.
I love these magnificent little machines. So very basic, so utterly simple, and yet so amazingly efficient. This is the fourth in my collection. This one arrived here after many years of neglect - it was in a dirty, rusty state, and I didn't have a lot of time to clean it up much, but was able to do enough to make it at least presentable. Better still, I was able to get it working. The drawband was unattached, probably because the carriage had seized up. 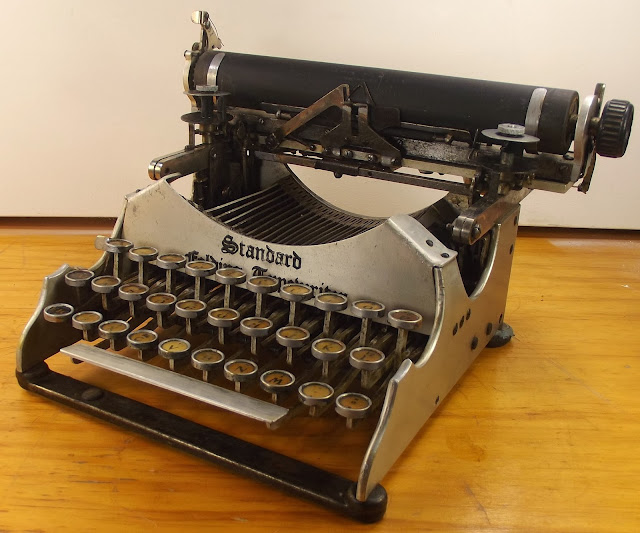 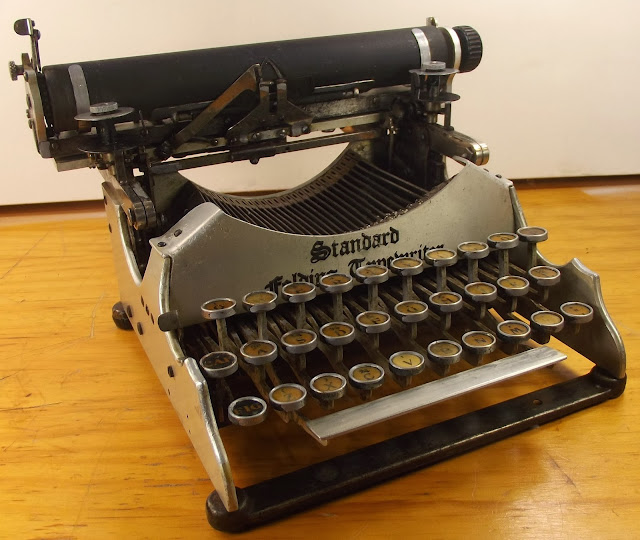 Once I got the mainspring rewound and the drawband re-attached, and got the carriage moving smoothly, that distinctive clicking sound as the Standard Folding fired into action and the carriage moved along its escapement rack was absolute music to my ears. I had removed the ribbon, and didn't have time for a typecast anyway. 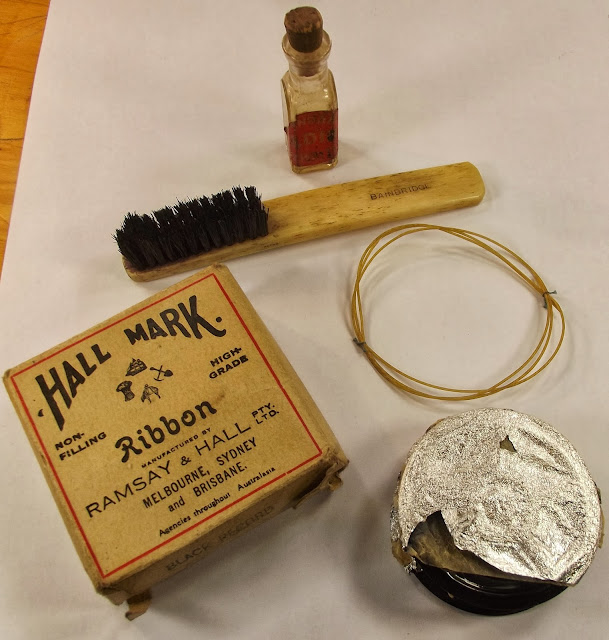 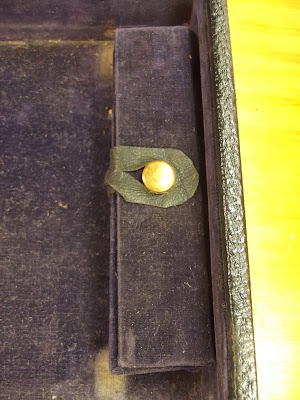 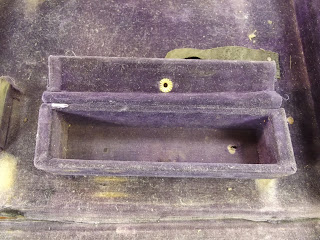 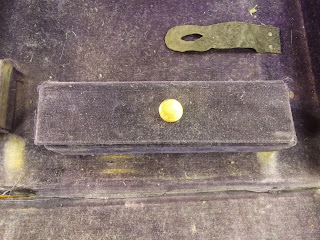 This Standard Folding was made for sale in Australia or another country back then using the pound sign - it was no dollar sign.
There were some goodies in the little purple velvet-lined box inside the case - a Bainbridge typewriter brush, a tiny bottle of Standard Typewriter Oil, a Hall Mark ribbon from Ramsay & Hall of Melbourne, Sydney and Brisbane, still in its box and tinfoil wrapping, and a spare drawband, still coiled. The inside of the case needs a good cleaning, but the outside is looking much better. 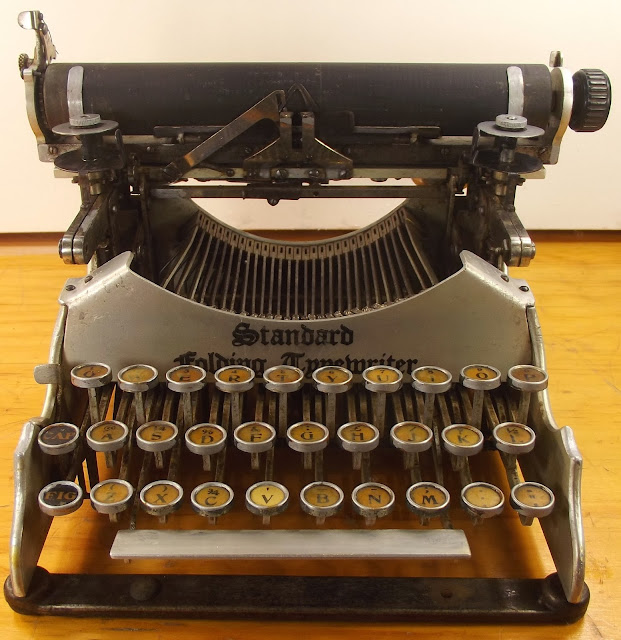 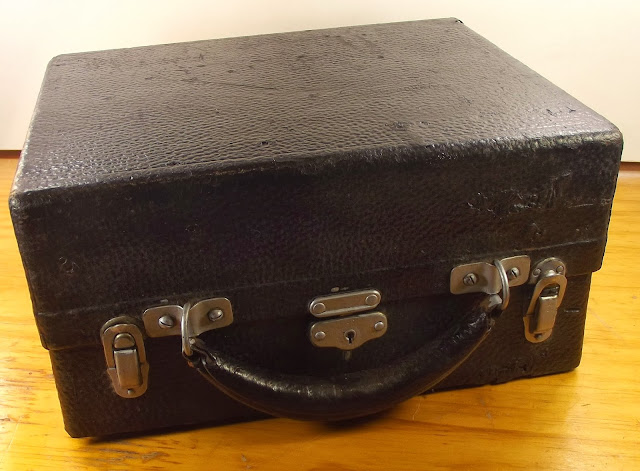 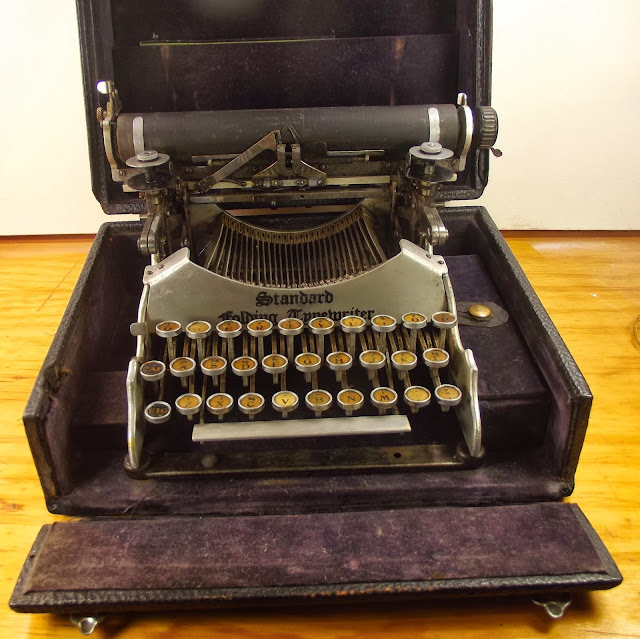 This will my last post for some days while I make my way to Cincinnati and then on to Morgantown for Herman Price's sixth annual Typewriter Gathering at the Chestnut Ridge Typewriter Museum in Fairmont, West Virginia, this weekend. I hope to be able to post from there. I'm afraid this Standard Folding is not yet in a fit state to take, but I am taking a "crossover" Corona 3 made by the Standard Typewriter Company in Groton. It is a gift for Peter Weil.
Posted by Robert Messenger at 18:41

I just knew I was bidding against you on this one!

Such a wonderful little machine. Is this your travelling typewriter?

What a find! You can see clearly the Corona 3 layout is already present in this design, yet it definitely looks earlier, less finished. The case is a bonus; and the other items inside the case are a real treasure!

Congratulations! Have a safe trip halfway around the world and back, and have lots of fun!

What an amazing state of preservation you have revealed after cleanup. In my very limited experience, it seems that the state of the case is often an indicator of the condition of the typewriter within, and the case of that Model 2 has certainly been well-preserved given its age of 102 years.

Never seen one before, either on the web or for real. I like the rough edges, it's a lot less smoother than a Corona 3.

Haha, I also very very almost placed a bid on that little tacker too...

Beautiful!
And you have four of these? So greedy!
Of course, I can't complain, I just acquired my third Royal portable in woodgrain.;)