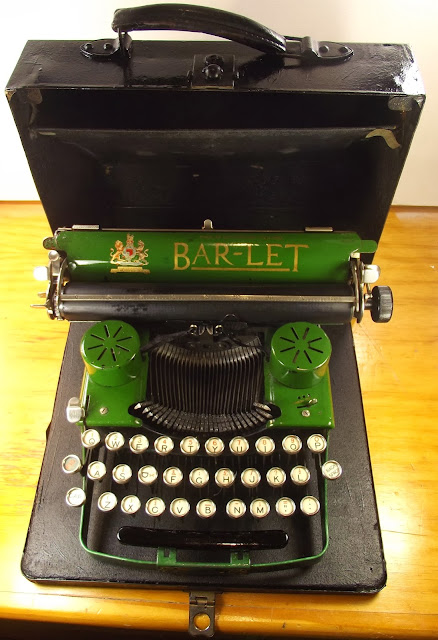 I have been wanting to own one of these little babies for so long now I can’t exactly remember since when. Certainly from the very first moment I ever laid my eyes on an image of one. That has to be at least 10 years ago. (And almost certainly that first image I saw of a Bar-Let Model 1 portable typewriter would have been from Herman Price's astonishing collection. What's not to like when you see three of these, all lined up together, in bright red, blue and green?)
I have to confess that, from the word go, it was the weirdness of the design that attracted me to the Bar-Let. And if I was ever going to own a Bar-Let portable myself, I was always absolutely determined that it was going to be the model with the little ribbon turrets on top, and the slightly curved keyboard, not the one with the flat ribbon spools cover (Model 2).
But for some reason, I originally got the impression it was a "large", heavy portable, more in line with what we would call a "semi-portable". Over the years, as I eyed off the Bar-Let and yearned to have one, I came to the view that it was actually somewhat smaller than I had at first thought, and therefore the cost of shipping from England to Australia would not break the bank after all. 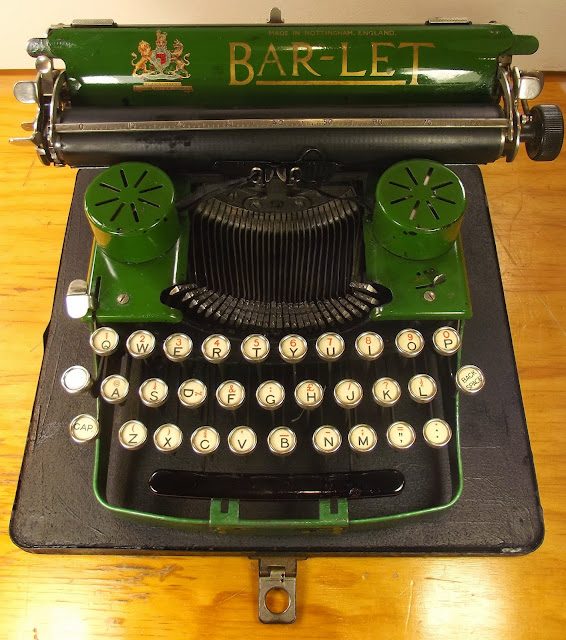 Right up until the moment the parcel arrived at my front doorstep this afternoon, I was expecting something at least the weight and size of a Senta (also designed by Franz Kraudzun). But when I looked at the box (and knowing the typewriter was supposed to be in a case), I thought, "How the hell did anyone squeeze a Bar-Let into something this small? There must be no packing around it."
Well, I was dead wrong, on all counts. The typewriter was in its case all right, and the whole thing was superbly packed. Image my surprise - and delight - when I opened the case and saw my first Bar-Let in the metal.
It is just 5 1/2 inches high, the carriage is 11 1/2 inches wide but the body itself only 7 1/2 inches wide. It is 9 1/2 inches deep. It weighs just 8.6lbs (3.9kg). The case is 11 1/2 inches wide, 10 1/2 inches deep and 6 1/4 inches high at  its highest point. Wow, talk about compact! Its feels just like a Corona 3. I love it! 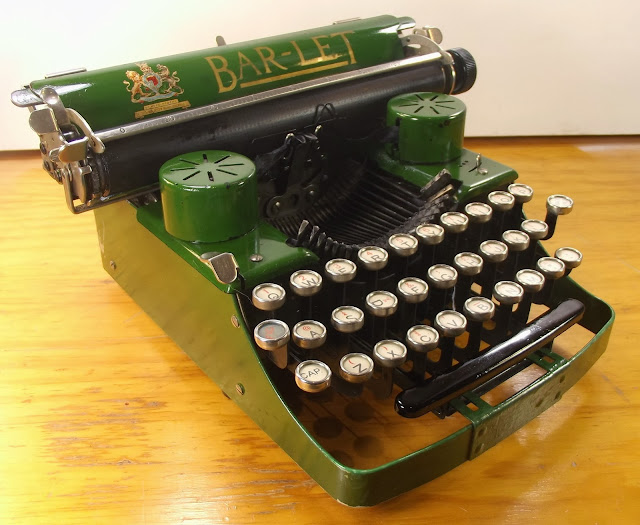 My misconceptions about the weight and size was more than likely what put me off taking the plunge and buying one of these machines earlier in my typewriter collecting. But earlier this year, knowing I was going to be standing in Herman Price's Chestnut Ridge Typewriter Museum in Fairmont, West Virginia, and busting to get my hands on one of his Bar-Lets, I decided it was time I got one of my own.
So I started hunting on British eBay. Many came up, and in each case I thought the price was right (a little less than I had expected, if anything). But for months, I couldn't find one that looked right (unscratched paper plate decals, turrets) and was owned by someone willing to post it to Australia. On that last count, I got dicked around no end, particularly by an eBay seller who had a blue one listed (which, incidentally, he can't seem to be able to shift). One guy with a bright green one listed said he wouldn't post "such a delicate item". I told him if he packed it correctly, it wouldn't be a problem. It was up to him. 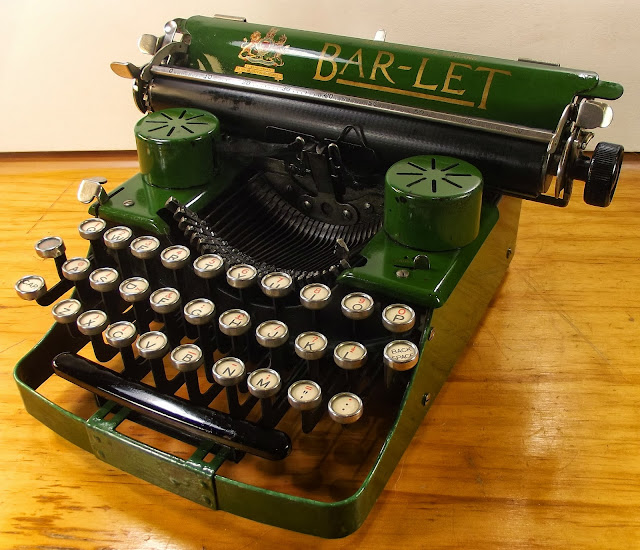 Finally, I found Amanda, a lady in Godalming, Surrey, who had two Bar-Lets for sale, this one and a black Model 2. She proved to be most helpful, and only too willing to ship to Australia. She also proved to be an expert courier price-picker and box packer. At last, my  time to own a Bar-Let had come. Boy, I am glad it did! I can now go to Herman's in a fortnight safe in the knowledge that I am not going to be tempted to break into his Bar-Let cabinets. I have one of these myself, one that is in good working order and with which I have happily typed.
Its serial number is 11722, meaning it was made in early 1934. The Model 1 was first produced in 1930 and the Model 2 was introduced in 1936. 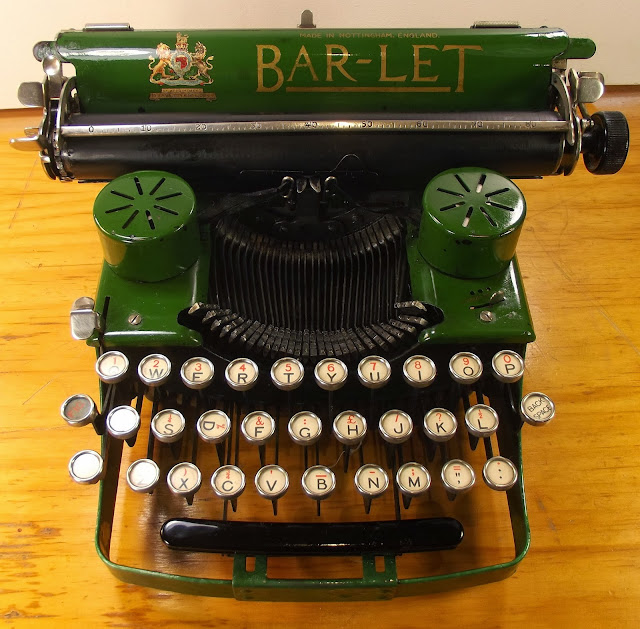 I noticed in Rob Bowker's post on his black Bar-Let Model 2 that he was struck by its "toy-like" qualities. I completely concur. After first taking in the reality of the size of the Bar-Let Model 1, and then looking at it a lot more closely, I realised why Jardines of Nottingham had become such a successful maker of toy typewriters - right up until modern times. You only have to look at the segment to realise that Jardines toy typewriters (mostly the Petite line) are squarely based on the Bar-Let. Jardines must have realised that all it had to do was reshape the body in a cheaper metal, downgrade the finish and reduce the mechanics to the bare minimum - and hey presto it had a damned good toy typewriter! 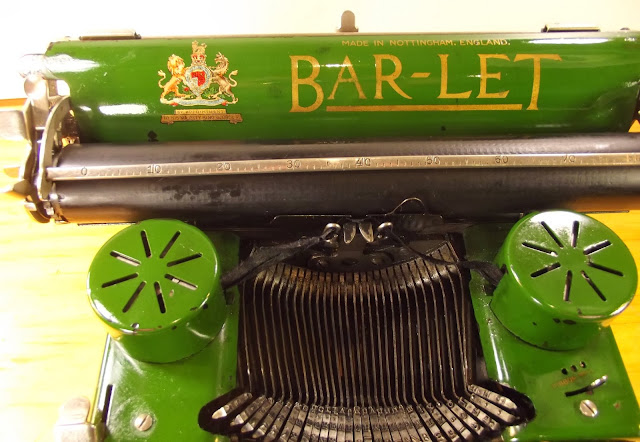 It must also be remembered, of course, that from the time the Jardines took over the Nottingham typewriter factory from the Richardsons in 1925, they made a Herbert Etheridge-designed "all-British" Bar-Lock conventional standard. Eventually, in the late 30s, just before the outbreak of World War II, they also made a slimline Bar-Lock portable.
In my excitement to unpack my Bar-Let and give it a rushed test type, I didn't worry about trying to change the ribbon. It's not much of a typecast, I know, but at least I was able to satisfy myself that this machine works perfectly well. It actually has quite a nice typing action. 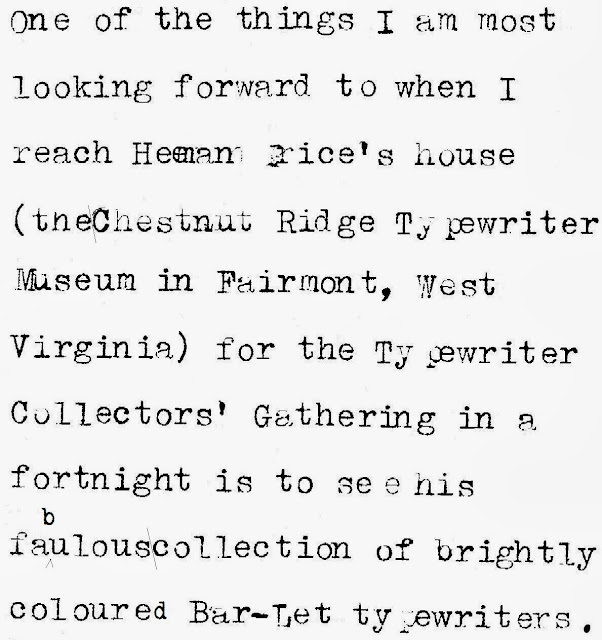 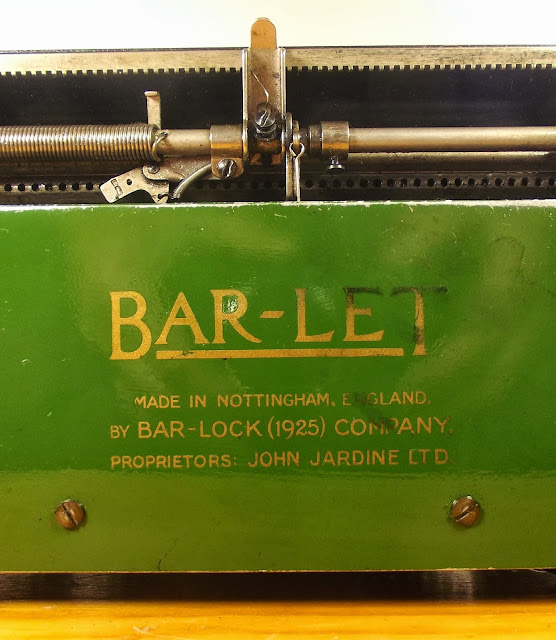 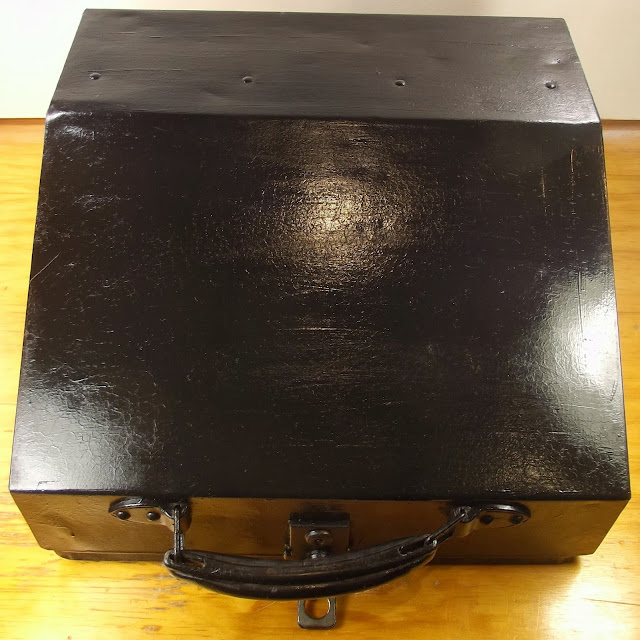 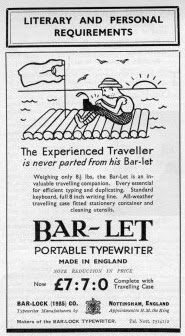 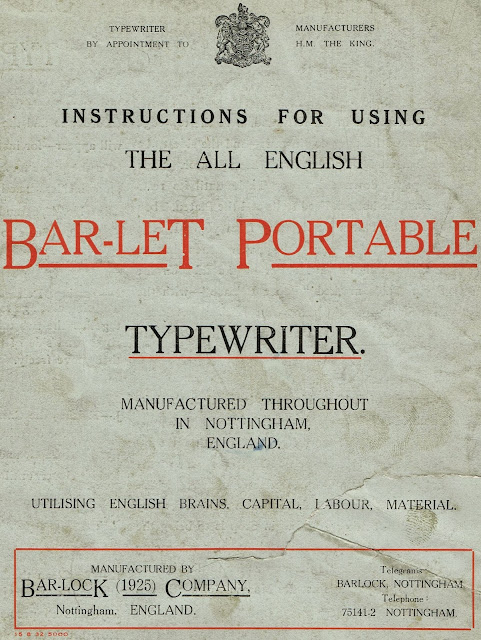 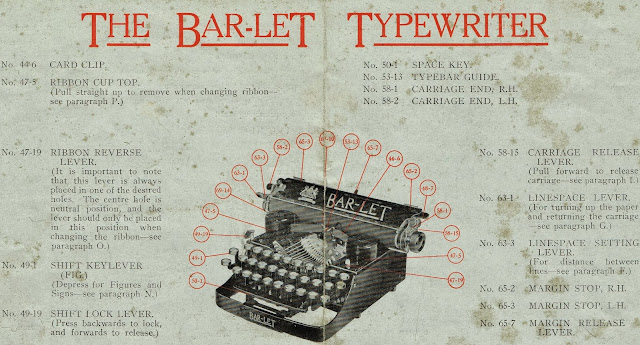 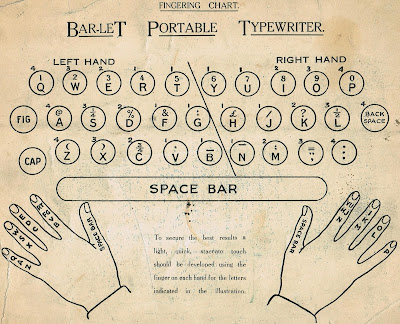 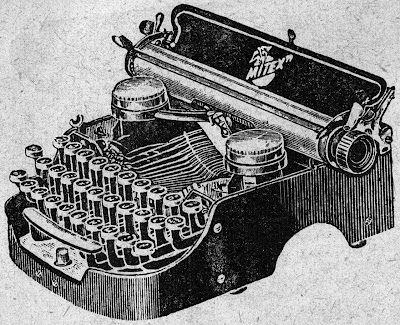 The Bar-Let Model 1 started life as the Mitex in 1922. It was later known as the Tell. 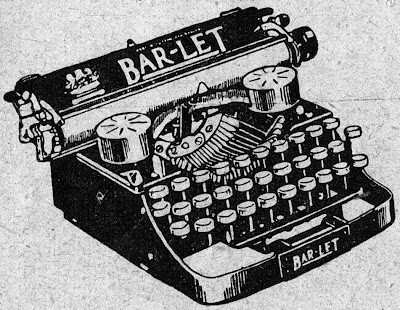 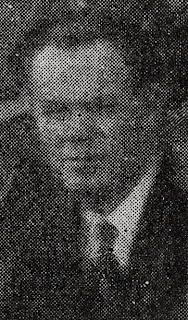 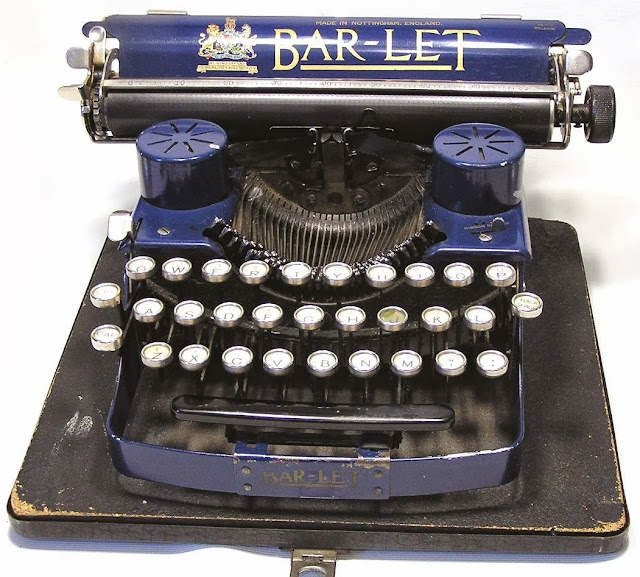 The blue Bar-Let Model 1. One of these is still for sale on British eBay, I think. I may now be tempted! 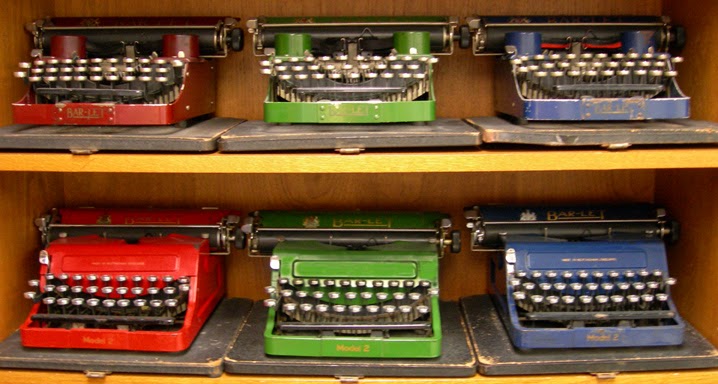 Herman Price's Models 1 and 2 Bar-Lets. I will be feasting on eyes on the real deals in a matter of days now. I have been oggling them for years - can hardly wait to get there!
Posted by Robert Messenger at 16:57

Congratulations on a fine typewriter find! This is the first one of these I've seen, and like you -- I want one. Maybe 10 years from now I will have one.

The really great part about yours is it looks like new and comes with all the nice accessories.

Holy moly, what a beautiful thing that is! What a find with the condition of the paint and the bonus goodies!

Hmm... made in Nottingham... painted Sherwood Green... and once owned by a Lady Marion.... there's also at least a faint literary connection there, don't you think?

Oh, well... Another fantastic machine to add to the ever-growing Wanted List.

This post of that wonderful machine is really no help at all in my ongoing struggle to limit typewriter acquisition.

I must be getting crazy, I thought you already owned one! Nevertheless, congratulations on this new addition to your typewriter collection. It's a wonderful small machine. Still in very good (cosmetic) condition.

You really will love Herman's Bar-Lets. And as I recall, he even has a Mitex or Tell!

Thank you Bill, Steve, Miguel, Tony, Spider and Richard for your kind comments. Miguel, I hadn't put that together, thank you! Richard, Herman put an image of his Tell on Facebook.

Went into a UK charity shop over the weekend and got myself a Bar-let 2 (1925) Jardine version. The reel spools are hidden under a cover which you can get to via two chrome thumb screws.

I have to say, I love it to bits. Got the brush on the inside of the cover but sadly missing the oil can and key for the lock, but in surprisingly good condition otherwise. Just needs a bit of TLC, gunk/ fluff removal, re-oiling and re-setting.

Couldn't get paper to draw through the rollers though yet. But hey, I'm not complaining

It was nice to find a serious collector blogging here.

Thanks for all the information!
Regards

Ian, congratulations on the typewriter acquisition.
I notice a lot of relative "newcomers" to typewriters (I am not suggesting here you are one, don't get me wrong), struggle with feeding paper on to the plants of old typewriters.
On many old typewriters, the feed rollers under the platen become worn and flattened with age and use, and especially if the platen release hasn't been applied while the typewriter has been stored.
The secret here, I usually find, is to feed the paper in at a pronounced angle. Sometimes that actually means getting a fingertip grip on a corner of the paper as it emerges from under the platen. Then straighten the paper with the platen release switch applied. Once the paper is straight, the platen release switch is back off, and the paper bail is in place, it is usually possible to type quite normally, perhaps by giving the typewriter some help in turning the lines. It seems to generally work for me. Worth a try, I think.

Thank you Robert, and what a find you are too. Don't be afraid to call me a "newcomer", I am! Although to be fair, I've always loved the things and was intrigued by their mechanics as a kid: I just never thought I'd end up buying one of that age.

I've already had a look around and noticed the spring to the shift-lock key (if that's what the it is) has come away. SO some work yet.

I did read about the feed rollers under the platten and that some people have improvised. Maybe I'll do that sometime too.

But for now, I'm just enjoying the experience of having a bit of history on show.

Thanks again for your blog, most interesting.

Hello,
I inherited a Bar-Let portable from my mother 20 years ago. I have just spotted the case in my attic and got it down to take a look :-) !
It is beautiful....black model and it works perfectly after all this time.
I have managed to find a replacement ribbon....although I don't think it needs one yet!
The only problem I have is that I can't work out how do do Carriage Return.......can no anyone help?
And of course a copy of an owners manual would be great!!!!!

Hello, several years late! I have one but I've looked all over and can't find a serial number. Where do they hide it? Kind regards ,Ian

push carriage all the way to the right...mine has 6964 stamped on the metal chassis underneath facing up..

If anyone wants a manual for the bar let portable model 2 typewriter, I have a PDF çopy. I would be happy to email it to anyone who needs it, but it would probably be easier for you to download it from the same place I did, which is at https://www.mrmrsvintagetypewriters.com/pages/typewriter-manuals-page. Hope this helps anyone who needs it. ��