Oliver Typewriter Gets the 10-Minute Treatment

The other day Georg Sommeregger stumbled across my post on my Portex portable typewriter from late June last year, and commented on the “10-minute treatment” – that is, the very quick clean up one does immediately one unpacks yet another “new” old typewriter. “I love the 10 minutes,” wrote Georg, “I do the same.”

Today I received this Oliver. The seller explained she had acquired it, along with a Yöst No 9, from an 80-year-old lady, “who bought them new”. The Oliver and the Yöst were on display at the seller’s wedding. The seller was most helpful, and her new father-in-law made a neat wooden, padded box so it could be safely couriered to me. 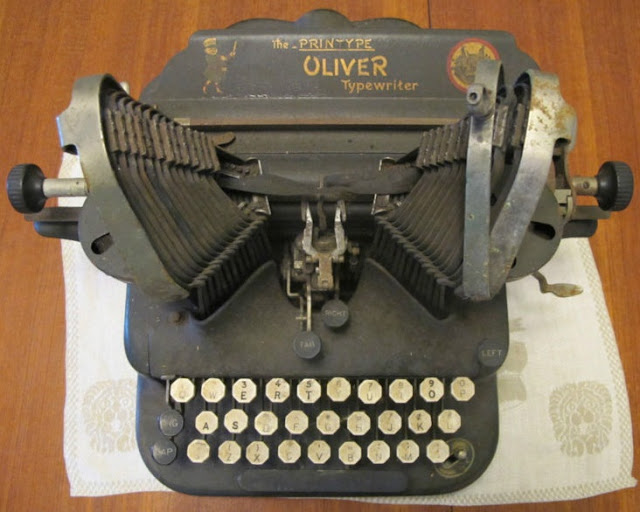 eBay listing photograph
I wasn’t too surprised when I saw the condition it was in. The eBay listing photographs had clearly indicated that it needed a good clean up, with much grit and grime evident. I was confident that in short time it would come up looking as sharp as a tack. And after the “10-minute treatment”, it did. 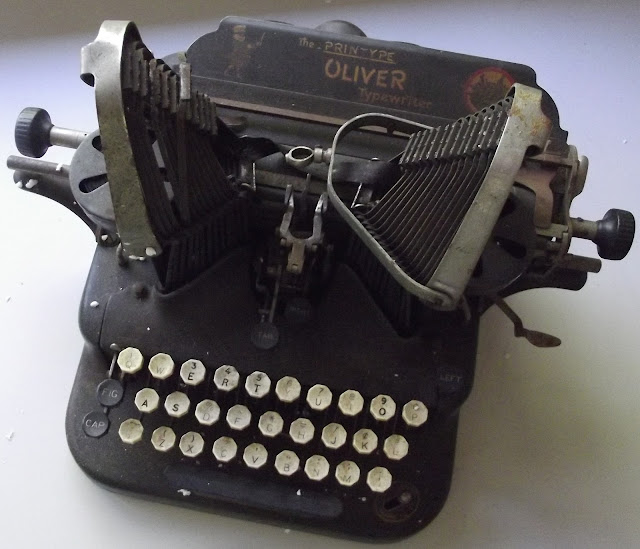 Just unpacked here today
Since then, with a little more time working on the Oliver, I have managed to get it working beautifully. The drawband had come unattached from the carriage, but it had got caught up under the carriage, so it was still attached to the mainspring and very taut. Thus I could tell there was still plenty of tension in the mainspring. Once the drawband was untangled and reattached, the Oliver took off like new, typing magnificently.

Obviously there is still a lot of work to be done yet. With a good oiling, the Oliver is looking even more special now. Once I have completed the work, in about a week, I will post on it again, so it can be seen fully restored to its full former glory. It already has a new bright red pencil inserted in its pencil carrier (my first Oliver didn’t have this device, something which always disappointed me). 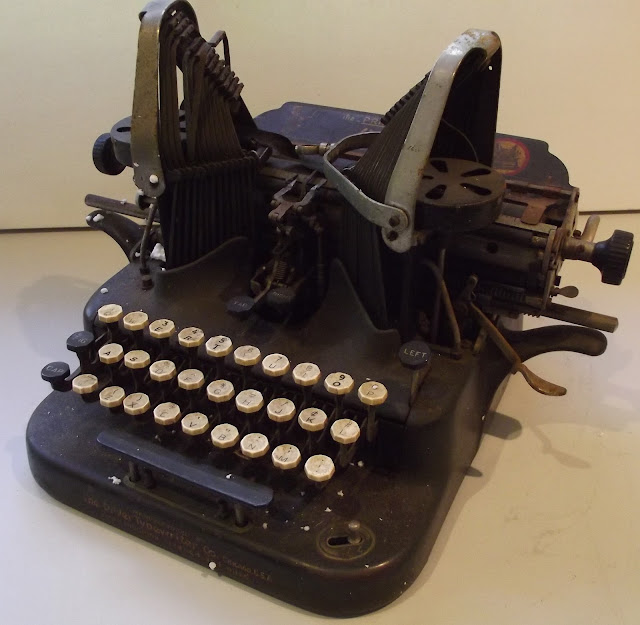 First appearances were deceptive
I have not yet been able to put this Oliver beside my No 5 to compare them, since the No 5 is still packed up after being in the typewriter exhibition. However, it strikes me this Oliver is significantly smaller and lighter. It may be just my imagination – we will have to wait and see. One thing I do know, the typeface on this Oliver is much smaller (about elite size) than the No 5, which has got a font which has to be at least 14-point. 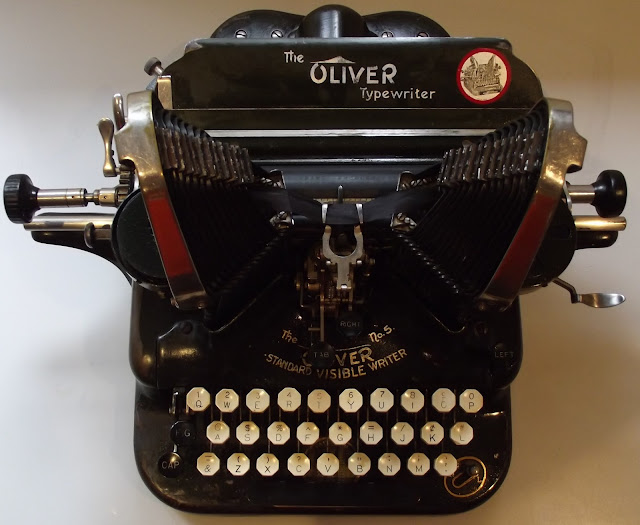 My other Oliver
There is no model number on this Oliver, but it has the serial number 452478. Going by Jett Morton’s The Oliver Typewriter Co: Machines and History (2011), it would seem this is also a 5, but I will be quite surprised if it is the same weight and size as the No 5 which is still packed up. Maybe someone out there can tell me for sure which model this is. The seller said she thought it was a No 9 and dated from 1912. I’d guess the year is about right, but I’m not convinced yet to about the model number. 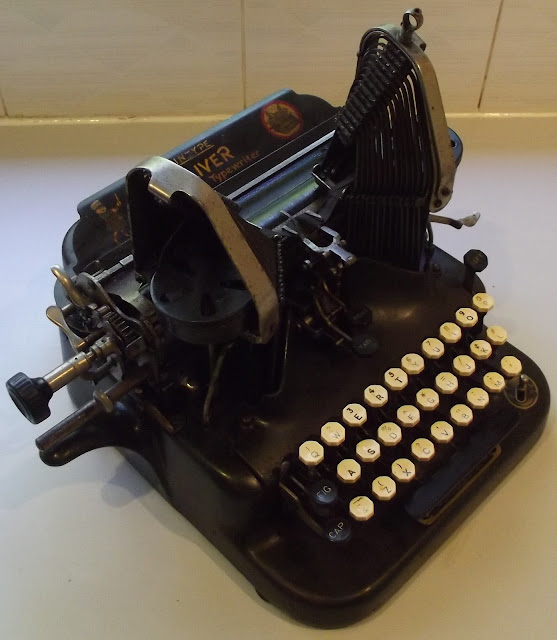 Posted by Robert Messenger at 00:50

Your photos are on the dark side, but it appears that the plate over the key levers goes up further than on the model 5. This indicates a model 7 or 9 (or their export versions -- 8 and 10, I think). The 9 is considerably more common.

My 9s have shift/fig keys on both sides and a different ribbon redirection arrangement. An Oliver 7 now for sale on eBay has the left margin release at the front right of the keyboard, and not the ribbon toggle. It looks like my model 5, SN 420058. Is there a model 6?
Rob

I was wondering who won this machine. I was a little unsure of it myself, and I had a feeling that the machine had been repainted at some point, particularly due to the missing decals.

In the photos it was too hard to tell. It was so thickly covered in dust that I personally felt uneasy bidding on it - as I didn't know what lurked beneath. When I saw the missing decals, I felt that there may very well be a problem with rusting in the past. The only other unit I have seen here in AU on ebay, which was here in Queensland, was so rusted that there wasn't a single shaving of paint to be seen.

I'm going to disagree with Richard on the height of this plate. It is identical to what is on my machine - which still has its '5' decals.

And to RN, There is indeed a model 6. In fact, a model 6 would make more sense in AU, as the even number machines were the export models.

I'm tipping my vote for this as a 5 though, which has been re painted by a dealer, without the decals. So it might be fine underneath. Curious to see how you go. That serial does put your machine after mine though.

I will agree with the lot of them...this is not a No. 9. As Richard said, the plate over the key levers is rather steep, and looks quite like my 5. On the 9, this lever has much more curvature to it. Of course, it could be a 7...or even a 6 or 8. I love that it has the pencil holder. I don't think either of mine are completely intact...

Thank you Georg, Richard, Robert, Scott and Ken for your comments.
Based on even closer inspection, and on considerable experience, there is no hint of any missing decals. Decals on machines of this age leave some faint sign of where they have been worn off (or removed). Not in this case. The decals on it are very clear and pronounced.
Same goes for any hint of repainting, by a dealer or otherwise. Absolutely none. Where there are a couple of tiny chips, bare metal. Very unlikely if there had been a repaint or touch-up job.

How interesting... I wonder what the situation is then.

Gentlemen,Where does one find the serial number plate on a No. 5? I have one with the last patent applied dated 1909. The shift at the right front corner and the rest of the key and control configurations indicate that it is similar to the one presented, by the way.