PART 146
On this day (October 14) in 1890, an English-born Canadian church clerk called Clerk was issued with a US patent for an electric “fan” typewriter.
By “fan”, I am referring to the type element – a fan of characters. 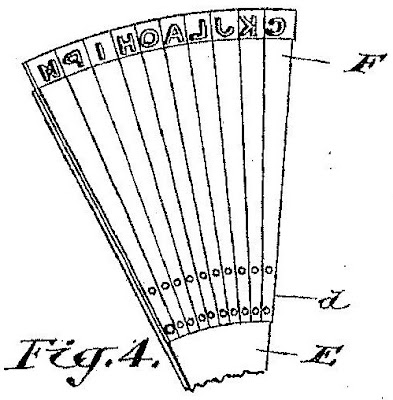 It seems Charles Robert Clerk, at the time a clerk in the Holy Orders of Toronto, was much too far ahead of his time! He gets the briefest of brief mentions in both of Michael Adler’s typewriter histories.

In the introduction to his patent specifications, Clerk wrote, “The object of the invention is to furnish a type-writer that will be cheaply made, rapidly operated, sure in its alignment, and not readily got out of order; and the invention consists in the peculiar construction, arrangement, and combination of parts hereinafter described and then definitely claimed. Figure 1 is a perspective view of my improved type-writer, partially broken away to expose the levers, and having the striking hammer and the magnet removed. 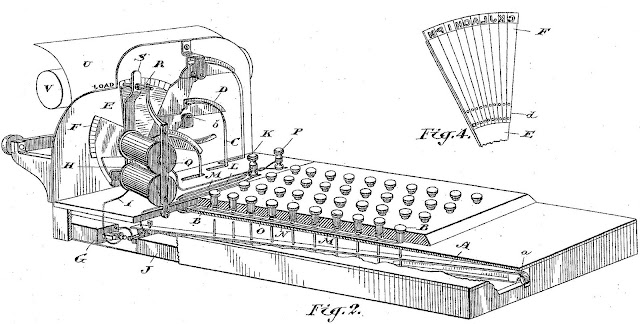 "Figure 2 is a view similar to Figure 1, except that the magnet and striking-hammer are in place. Figure 3 is a detail showing the arrangement of the wires in connection with the keys. Figure 4 is a detail of the type-plates. Figure la is a plan showing the arrangement of the fan-shaped plate E and inking-pad. Figure lb is an elevation of the same parts.” 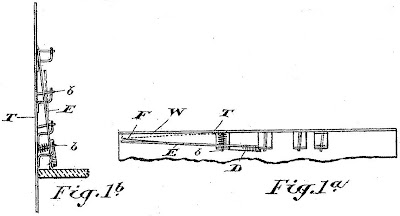 Clerk, born in Soho, London, in late 1850, quickly gave up on electric typewriters and devoted himself to the church. 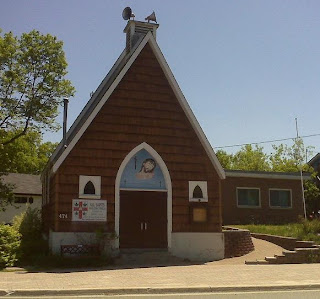 All Saints, MacTier, Ontario, today
He became an Anglican Lay Missionary in MacTier, Ontario, near Lake Huron. In 1908 the Canadian Pacific Railway between Toronto and Romford (Sudbury) was completed and Muskoka Station was made a divisional point where new crews took over from the crews out of Toronto who stayed overnight and returned to Toronto. usually the next day. Over time, a roundhouse and boarding house were built. Clerk ministered to the men working on the track and, when Muskoka Station came into existence, he began holding services in the boarding house. Clerk farmed in Freeman near MacTier and Foot’s Bay and built a log house and log chapel. This chapel had a bell which was transferred to the new All Saints Anglican Church built in MacTier in 1912. The bell was later returned to the Clerk family. Clerk "baptised many local children, even if they were not children of Anglicans, as he believed that all children should be baptised even if neither they nor their families ever darkened the door of a church again." 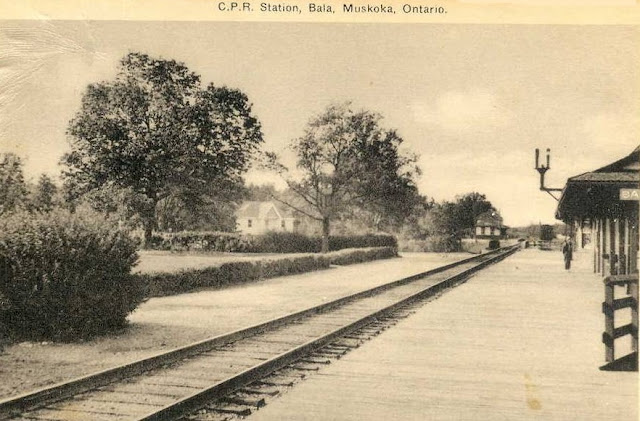 Clerk was said to be “tireless in bringing God to the people of this wild and untamed region, and it was through his efforts that funds were raised for All Saint’s Church. Unfortunately, he didn’t live long enough to see the church built, dying a year earlier in 1911.”
The electric fan typewriter died with him.
Posted by Robert Messenger at 00:30

Wow ... this really looks creative. It would be strange to have the paper to the left of the keyboard!

Hi Riohard. Yes, agreed. Although since I am one of those left-handers who keeps the mouse to the right of the screen, it might have suited me?