On This Day in Typewriter History: The Manhattan and the Kneist - Reinventing the Wheel 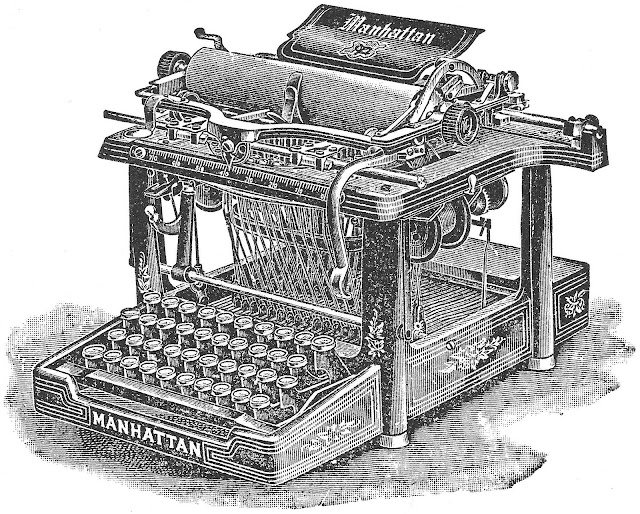 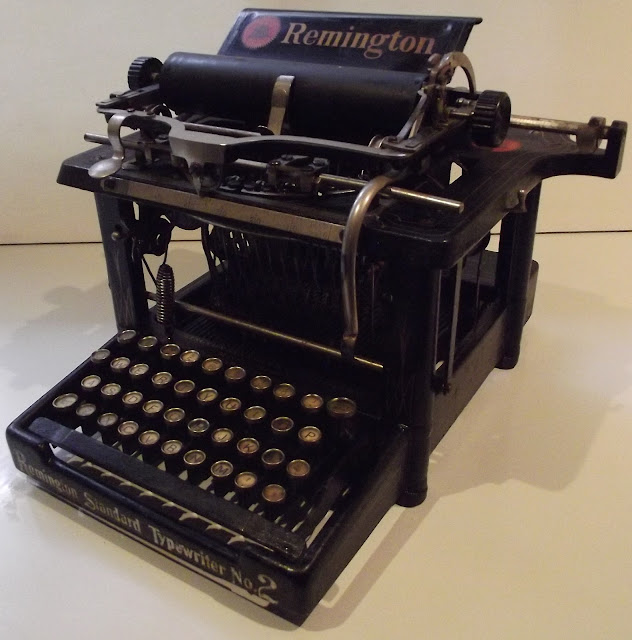 Yes, it's the 1878 Remington No 2
John Brown Price, of Wollaston, Massachusetts, had done well enough from designing a series of sewing machines and locks between 1883 and 1892 to divert his attention to typewriters.
But Price was no inventor, merely an experienced and skillful mechanical engineer. When it came to the typewriter, he simply took the Remington No 2 and “re-invented” it. He called it the Manhattan. 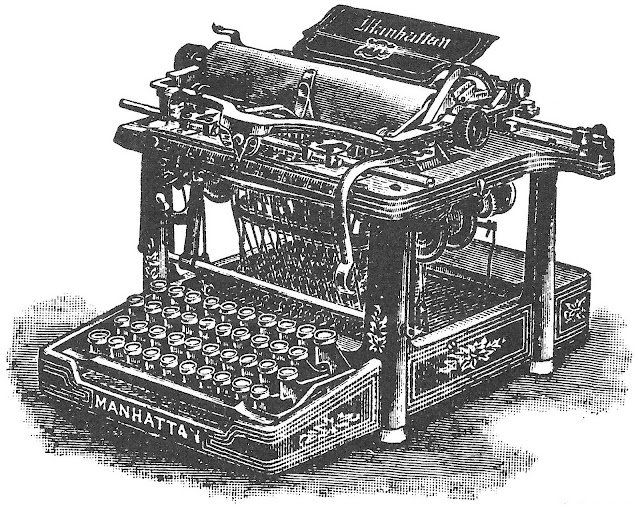 The Manhattan was little more than a new brand name on a machine which had started life as the Sholes & Glidden in 1873. With improvements from a succession of Remington engineers and mechanical designers, such as William McKendree Jenne, Jefferson Moody Clough and Byron Alden Brooks (the shift device) the S & G had re-emerged as the significantly updated Remington No 2 in 1878.
By 1896 the Sholes, Glidden, Soulé, Washburn, Schwalbach, Jenne, Clough and Brooks patents had all expired.  But so too had the Remington No 2 been well and truly overtaken by advances in typewriter technology, most notably by the Franz Xaver Wagner-Underwood visible writing machine. 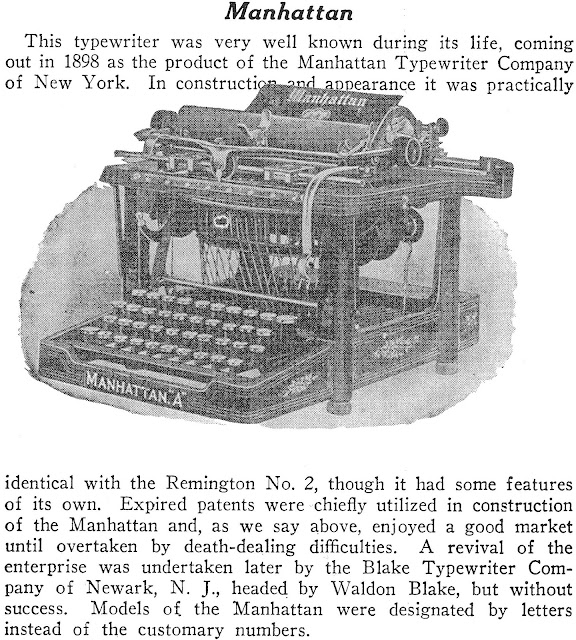 A Condensed History, 1923
Paul Lippman in American Typewriters called the Manhattan “a virtual clone” of the Remington No 2 and Michael Adler in his Antique Typewriters said it is a “mutant”. Earlier historians had been slightly kinder. A Condensed History of the Writing Machine said the Manhattan was “practically identical” to the Remington No 2 (with “some features of its own”); G.C.Mares said it “resuscitated” the Remington No 2 (thus it was built on “familiar and approved lines”); but C.V.Oden felt it was a retrospective move to restore a “discarded” model, and therefore construction could not be justified.

Oden 1917
Adler wrote that it was “One of several attempts at re-animating the famous Remington Model 2 after it had been superseded and its patents expired.” A Condensed History also pointed to the use of expired patents, as did Lippman.
Adler says the Manhattan “enjoyed reasonable sales for some years [from 1898] before production was halted. An attempted re-animation in 1905 by the Blake Typewriter Company of Newark, New Jersey, was unsuccessful and ended in the hands of the receiver four years later.”

"The Best Machine on the Market"
The Blake behind the Blake Typewriter Company is a very interesting character. In one typewriter history he is referred to as “Waldon Blake” and in another as “C.Waldon Blake”. Both are wrong, although the Blake part is right.
He was in fact George Waldron (not Waldon) Blake, a man with an Australian connection. Blake was born in Poughkeepsie, New York, on September 20, 1845, and served in the Civil War in heavy artillery for three years.  He later served 11 years in the First Company Governor's Foot Guard in Hartford, Connecticut. Going into business, he ran the Blake Spear Company in Waterbury, Connecticut.

Mares 1909
In 1887 he arrived in Australia and during the next eight years became involved in a range of activities, from ice creams to iron mongering. As well as travelling around mainland Australia, Blake introduced 80 lines of American goods to New Zealand, Tasmania and Fiji. 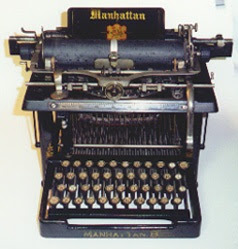 From the Anthony Casillo Collection
Blake returned to the US in 1895 and through his involvement in sewing machine companies (Woods, Eldridge, Wilson) became associated with John Brown Price. Blake established the Kangaroo Company, a foreign corporation licensed to trade in New York, and set himself up as an industrial broker in various parts of the eastern US, as well as being vice-president of the Manhattan Motor Oil Company in New Jersey.  He sold real estate and stocks and bonds. After Price’s death in 1906 and the failure of the Blake Typewriter Company, Blake moved to Rhode Island in 1909 as a business broker. 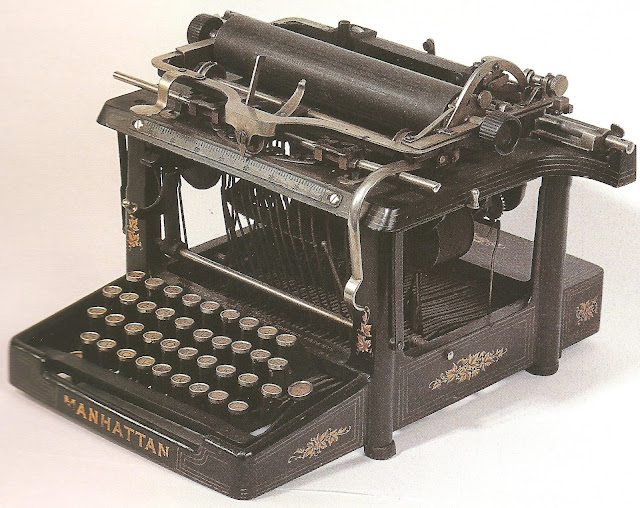 It was as an industrial broker and an associate of Price that he picked up the pieces and set up the Blake Typewriter Company in 1905. Whether he was involved with Price in an intermediary attempt to keep Price’s Manhattan typewriter in production, through the Imperial Typewriter Company, of Newark. in 1904, is not known.
Between 1896 and 1900, Price was granted seven patents for the Manhattan, most of them referencing the “well-known Remington machine”. Two of them were issued on this day (October 17) in 1899. All were assigned to his Manhattan Typewriter Company. Price moved from Massachusetts to Newark in 1898 to oversee production of “his” typewriter. 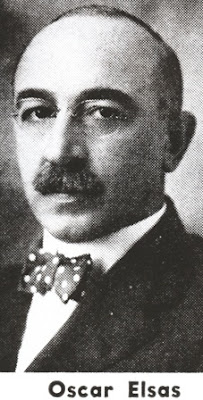 John Brown Price was born in Worchester, Massachusetts, on Boxing Day 1845, the son of a Manchester, England, born machinist. From 1883 he patented sewing machines, notably for the Bispool Sewing Machine Company of Kittery, Maine, and for Oscar Elsas in Atlanta. Elsas (1871-1924) founded the Fulton Bag and Cotton Mill in 1881. This became the largest employer in Atlanta. Price also designed a secondary battery for the Electric Accumulator Company of New York. 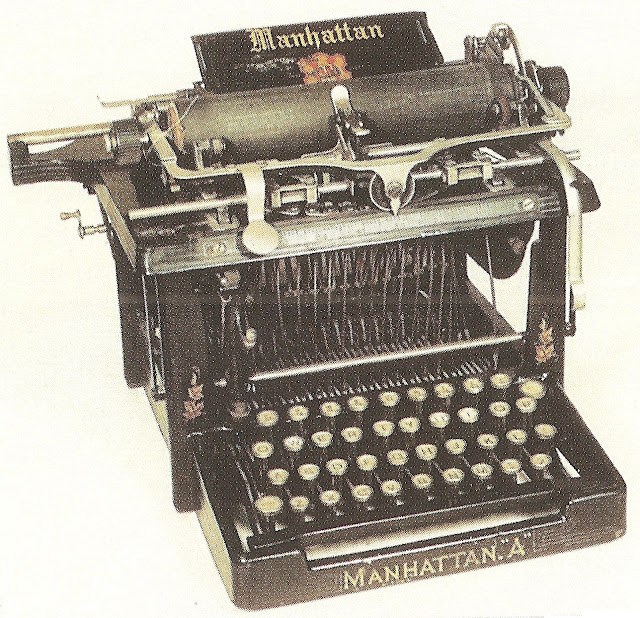 In a flurry of activity in 1892, Price designed a seal lock, padlock and cylinder lock, a measuring square, bobbins and a very advanced combined paperweight, letterscale and calendar. He died in Quincy, Massachusetts, on November 24, 1906, aged 60. 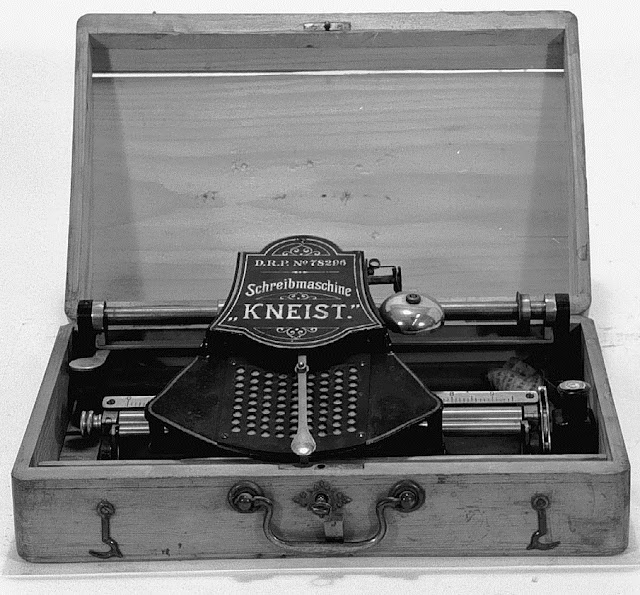 On the subject of “reinventing the wheel” through typewriters, another patent issued on this day (October 17) in 1899, to Otto Ferdinand Mayer, of Berlin, raises not so much a question of resurrecting previously successful typewriters as one of outright plagiarism. 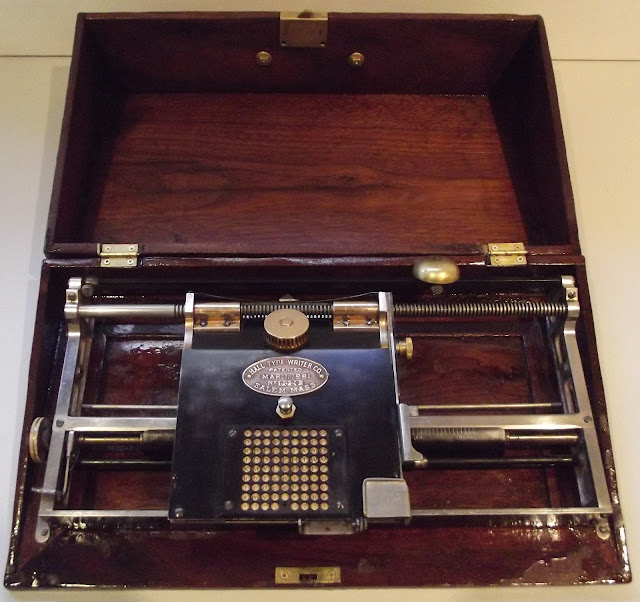 The patent issued to Mayer in 1899 – one of four US typewriter patents issued to this German designer between 1896 and 1903 - involved a typewheel and hammer machine called the Blitz, which Adler does not believe was ever made. 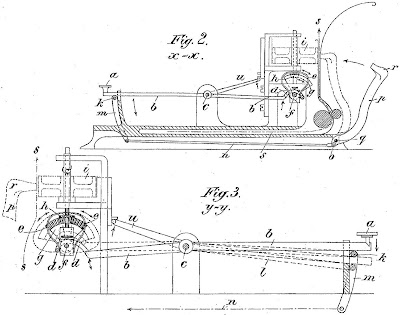 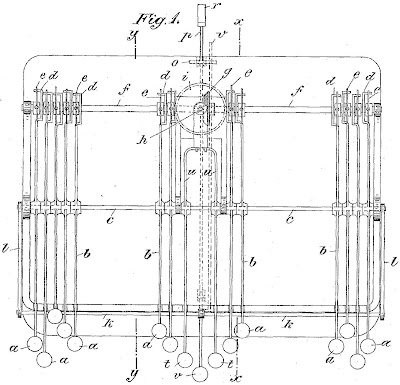 The Blitz
The Mayer typewriter which was made was the rare index machine, the Kneist, which Adler says was “blatantly” inspired by the Hall. “One could hardly call it an invention” Adler wrote. “There was little to separate the Kneist from the Hall”. 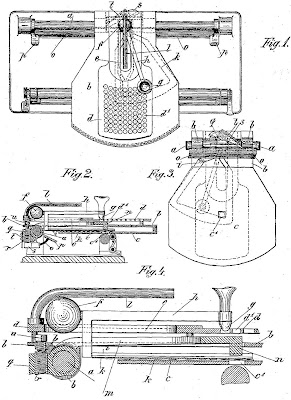 Mayer's Kneist
Adler and other historians link a J.Funcke, also of Berlin, to this Kneist design, though not US patents support this connection. The Kneist was made by Wunder and Kneist in Hannover in 1893. 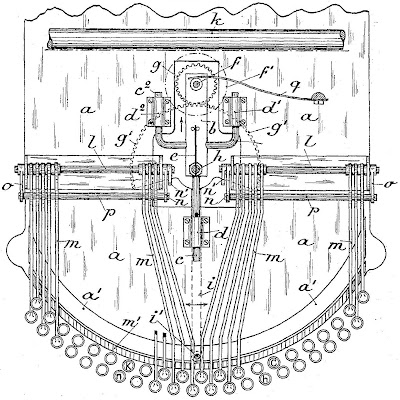 Posted by Robert Messenger at 01:08

Amazing how machines were copied as different brands. I wonder if there were infringement law suits back in those days.

There sure were, Bill, lots of them. John Brown Price was careful to wait until all patents had expired (14 years, in most cases). Crandall even had Densmore's wife and niece locked up over a patent dispute! It was a nasty business back then.

All of these patent disputes make for some rare typewriters, eh? I've seen one Manhattan come up for sale, but that's about it.

Also, I would really love to hear about the 'very advanced combined paperweight'. How could a paperweight be 'advanced'? Neat!