On This Day in Typewriter History: Barr’s Black Beauty 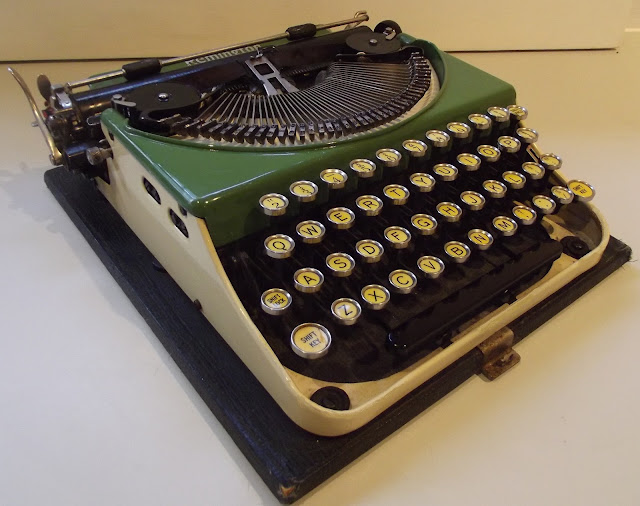 Spring has sprung in glorious colours, the sun is shining, I’m enjoying my first day of retirement (finally), and Herman Price has been kind enough to get in touch to invite me to next year’s big Chestnut Ridge typewriter bash. (Goodness, was I Como green with envy when I saw Richard Polt’s and Ken Coghlan’s photos of this month’s event?!!! Como green? Read on.) 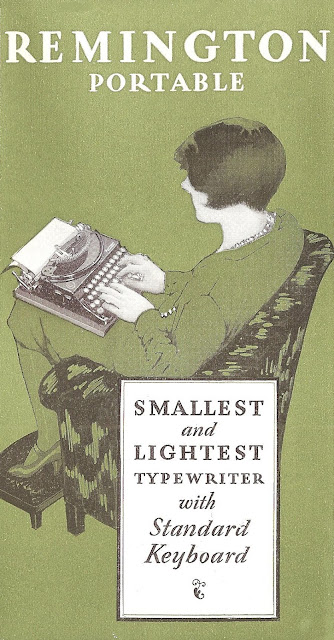 As soon as I’ve caught up with the hundreds of emails I owe Herman, Richard, Will, Jasper et al, I’m booking the flight for West Virginia. For one thing, I want to see Herman’s Arthur Briggs Remington portable prototype.
I know I can afford the trip, because my luck is riding high. 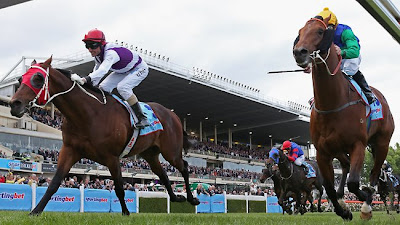 Not that I follow the sport, but the Spring Racing Carnival is heading inexorably toward the Melbourne Cup (on November 6; it’s bigger than the Kentucky Derby) and I’m feeling blessed. 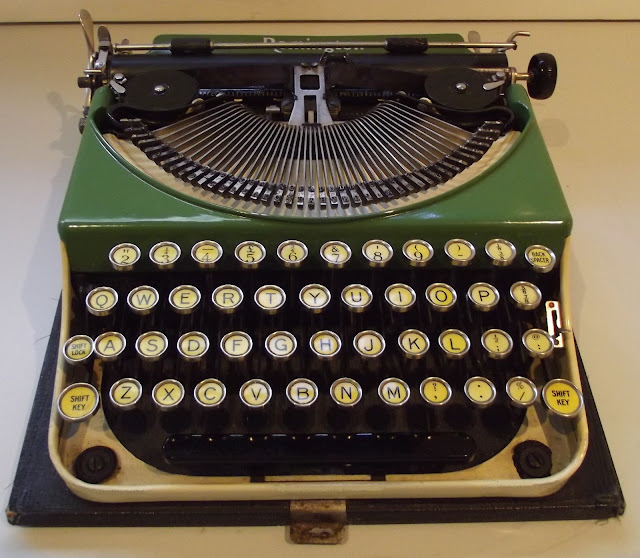 This little ivory and Como green 1928 Remington portable typewriter is definitely my current four-leaf clover. (Como green: Remington’s description, not mine. Does it come from the colour of the Italian lake, I wonder?)

Yesterday’s W.S.Cox Plate, the Australasian weight-for-age championship race, was won at Moonee Valley by a New Zealand colt called Ocean Park (beating a horse ridden by a jockey wearing Como green sleeves?). So all is well with the world. 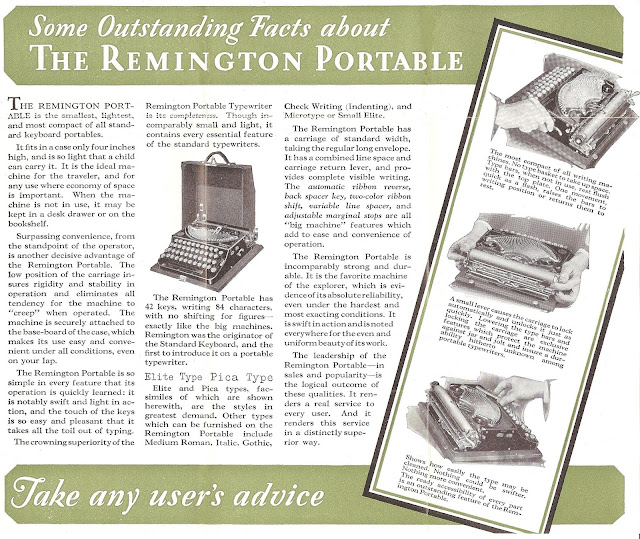 When it comes for weight-for-age reliability in portable typewriters, nothing beats John Henry Barr’s original black beauty, the Remington. 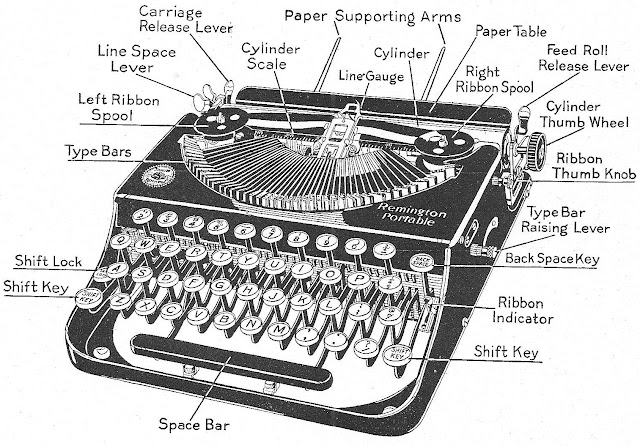 I’m not going to go into the life of John Henry Barr or the Barr design here. It can be read at my post from May last year. 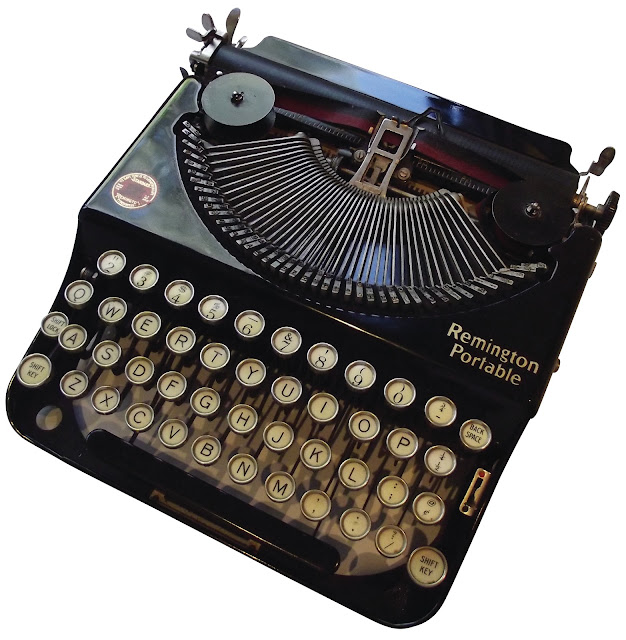 Still, the occasion should be marked. And to celebrate it, I have taken out one of my latest Remington portable acquisitions, a gorgeous Model 2. It’s serial number is V125926, meaning it was made in October 1928, almost exactly 84 years ago. 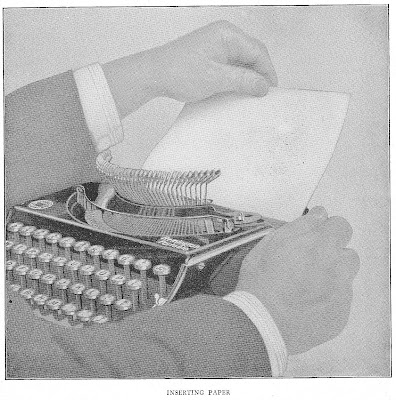 Showing its age? Spurn the thought! This machine is typing like it came off the Ilion production line just yesterday. 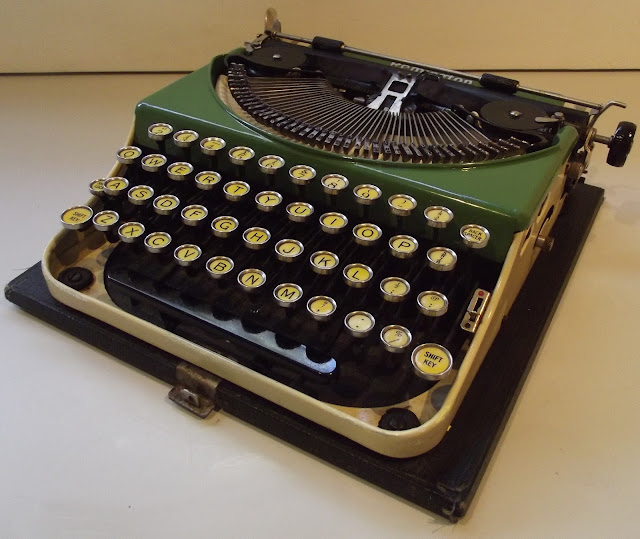 I won the eBay auction for this little champion in mid-August – for just $22.28! It had been listed at a starting price of $14.95 10 days earlier and I simply couldn’t believe there were only four bids on it. Perhaps its listing as an “Old Remington type writer” - rather than typewriter - might have helped my cause. Some of the increasing number of Australians who are on the hunt for typewriters on eBay may not have been looking under the search words “type writer”. Perhaps I shouldn’t divulge this racing tip. 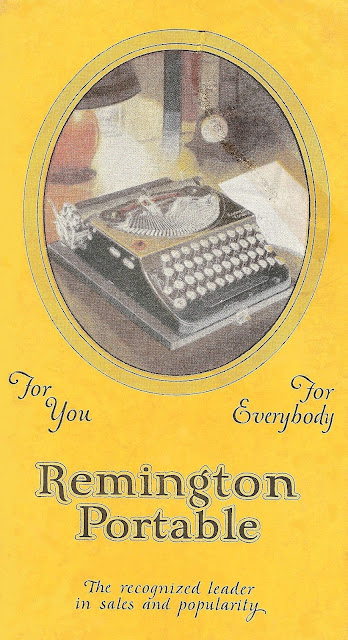 And talking of racing, it has often been suggested to me that instead of sitting at a computer until the last few seconds of an eBay typewriter auction, I should use a program to bid for me. The experience of this typewriter auction told me otherwise. My heart was racing in those last 30 seconds, as I fretted over winning this item. The adrenalin rush was absolutely enormous. It left me shaking. That’s how I get my kicks – and I think I’m addicted to it, 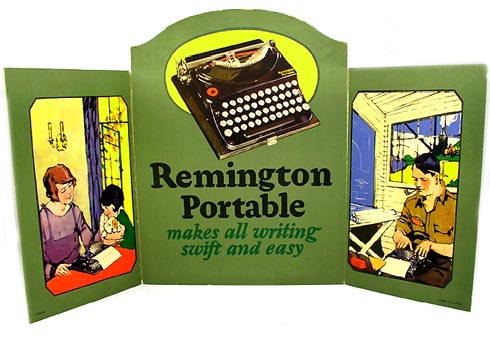 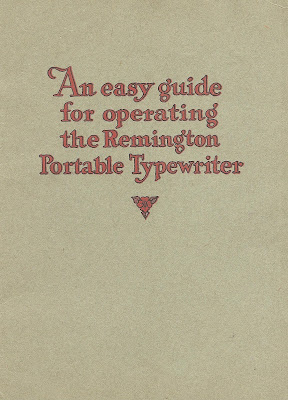 But if I thought winning the auction and paying such a ridiculously low price for this Remington was to be the extent of my luck, imagine how I felt when it arrived and I opened the case. I thought it was brand new! Not a mark on it! And it types as if it’s almost new, too. 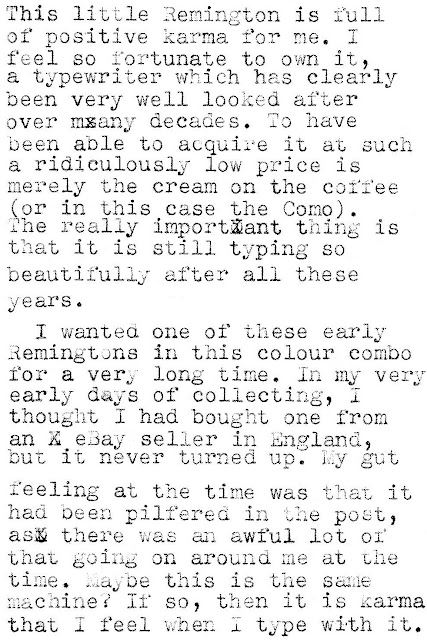 When I posted on Barr’s design last year, Richard Polt commented that the Remington was “one of the most successful portable typewriters ever.” 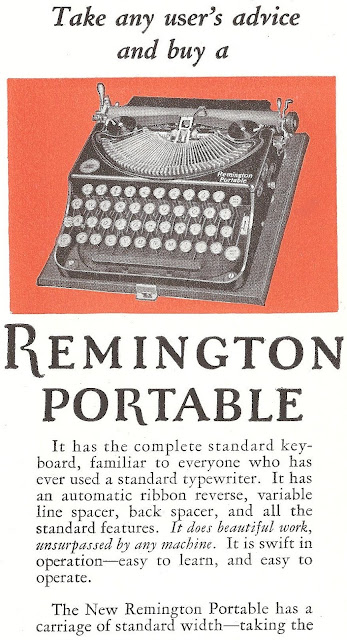 What more can I add? This ivory and Como green Rem proves Richard’s point. The major part of this line’s success is surely that it was so well designed and built. Its ongoing reliability after some 80 or 90 years is testament enough to Barr’s genius. 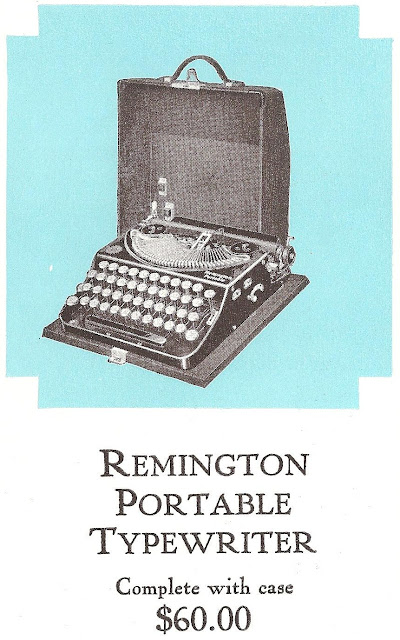 As for the colours of this machine, Richard on his Remington portable typewriters page at his The Classic Typewriter website wryly comments: “[The Model] 2 comes in various colors and color combinations (collect 'em all!)  … No 2 portables were produced both in basic black and in a number of appealing color combinations; the copywriters had a field day inventing names for them.”
So right, Richard. 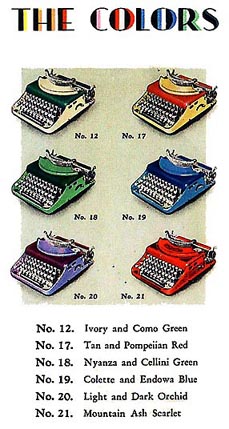 Colour chart from Richard Polt's Remington Portable Typewriter page
Ivory and Como Green?
Tan and Pompeiian Red?
Nyanza (it’s a Kenyan province, I believe) and Cellini Green?
Colette and Endowa Blue (what the …?)
Orchid?
Mountain Ash Red?
Give that copywriter a job!
OK, so I have the Como Green, the Nyanza, the Orchid and the Mountain Ash, and I was sure I had a Colette somewhere, too. Anyone for the Pompeiian Red? We should try very hard, as Richard suggests, to collect ‘em all! 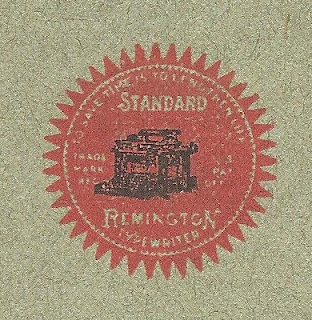 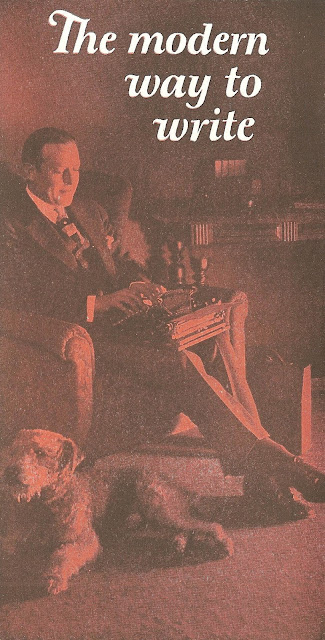 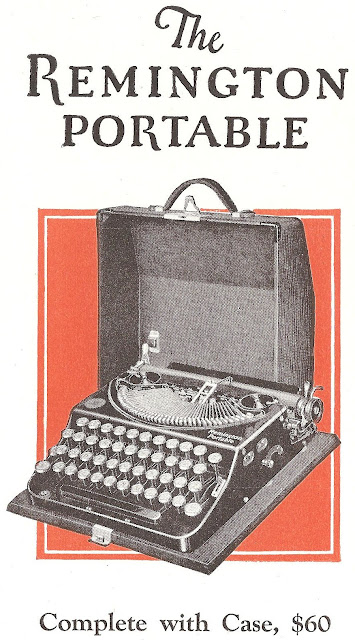 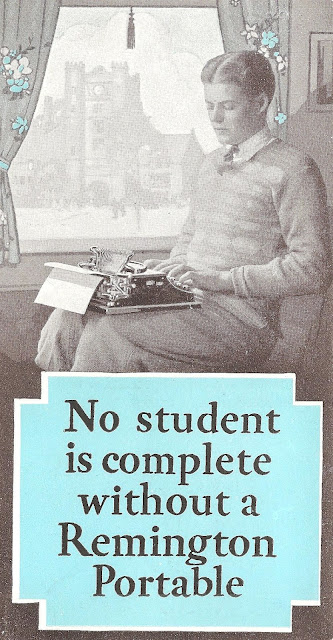 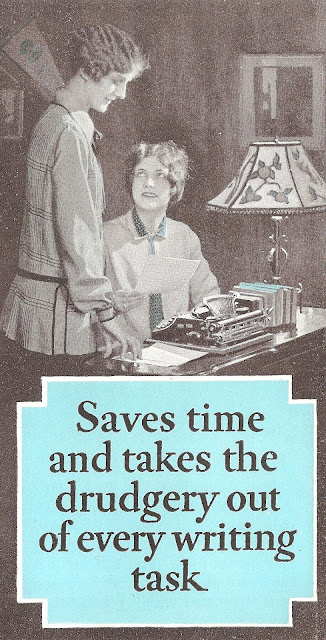 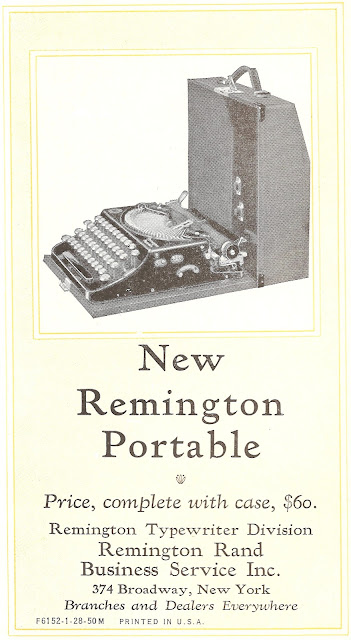 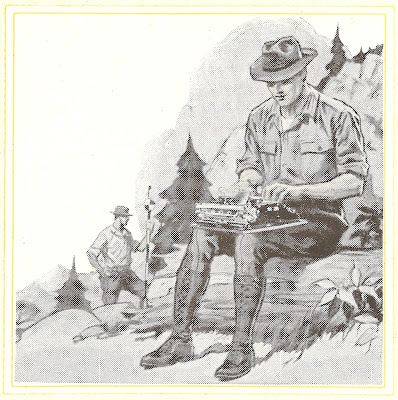 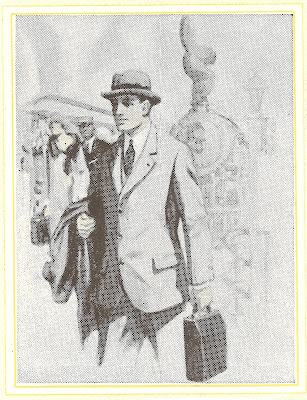 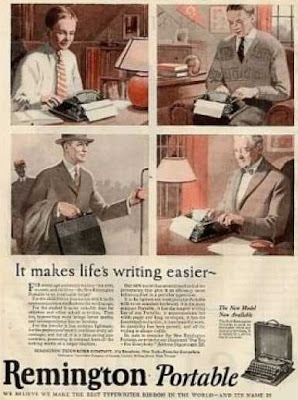 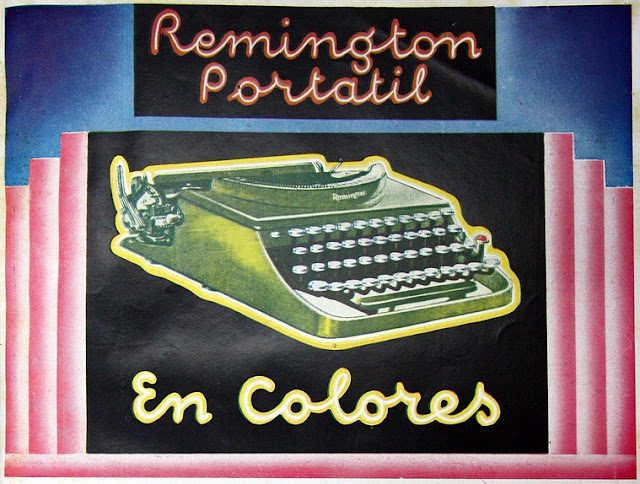 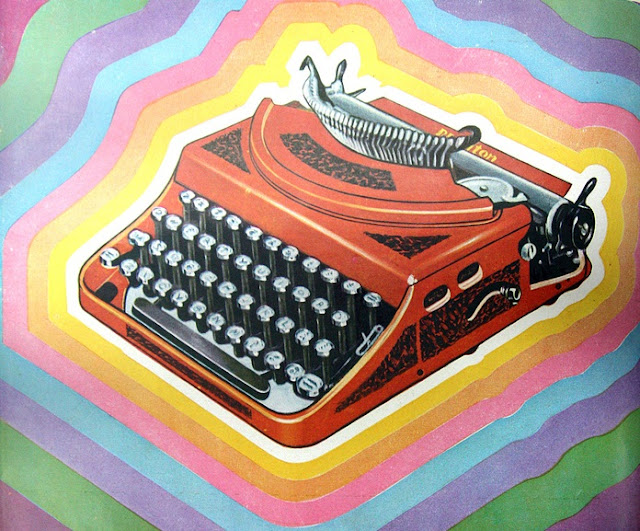 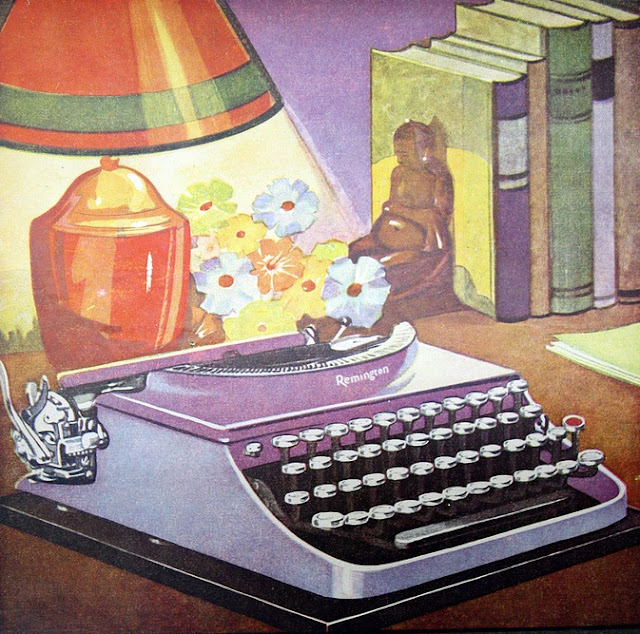 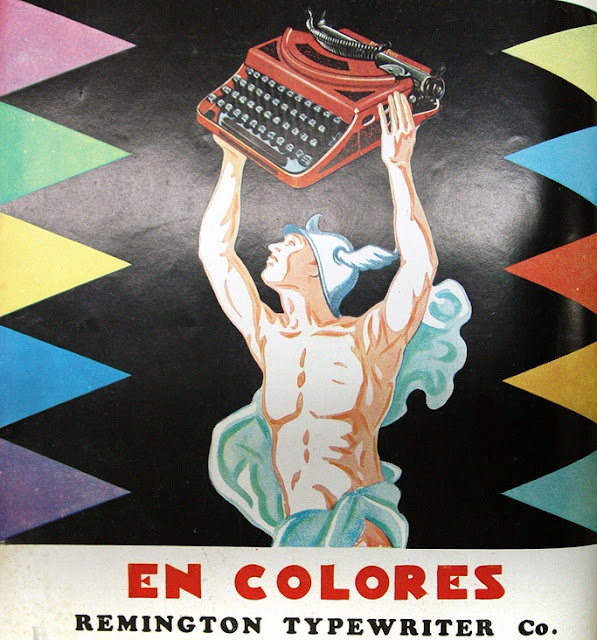 These last four images courtesy of Georg Sommeregger
Posted by Robert Messenger at 21:29

Congratulations on such a great find! I have been wanting an early Remington portable for quite some time. I like the way the keys stand up for use. One day at least one will be part of my collection.

Wonderful find! Mine is in basic black from 1922, and I thought of it when I went through the King Tut exhibit - it would not have been out of place there at all.

I have seen this exact Remington a few times at an antique store near me. I absolutely loved the color, it seemed to work well enough, but near half of the platen was GONE! I decided against purchasing it based on this, as a new platen would push the cost of the typewriter over what I wanted to spend. A lovely machine, though, and it is great to see you have one!

My god...can you imagine how great it would be for you to show up at the next meeting?! Oh, please do! I didn't think I could be more excited about the next one...but now I am! Hey! Bring Scott with you!

Congratulations on your find! I'm the fortunate owner of a "Ivory and Ivory" Remington Portable 2, and I agree that it is a truly amazing design.

I can always count on you to expand my typewriter "Wish List"!

Your Como Green Remington is gorgeous. I truly enjoy success stories like this.

The list of available color combinations for this model are astounding.

The light and dark orchid one is...unbelievable!

I have been on the hunt for the purple remington for the longest time to complete my rainbow collection. =P (hehehe don't judge me for being so ditzy) =P

The Remington Portable really is a gem of a design, groundbreaking at its time. Many thanks for posting all the graphics! Actually (re)printed some. These are very nice as inspiration during the (slow) refurbishing of some of these little machines.