The Typewriter Degeneration of Art Buchwald 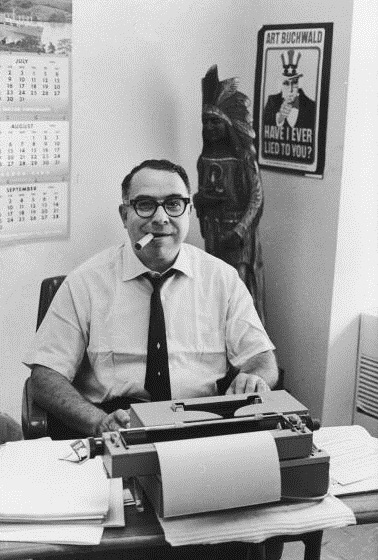 On the 87th anniversary of Art Buchwald's birth, on October 20, 1925, in Mount Vernon, New York, let's look at the way his work tools changed over a quarter of a century. Above, Buchwald at his Olivetti Praxis 48 in 1968. 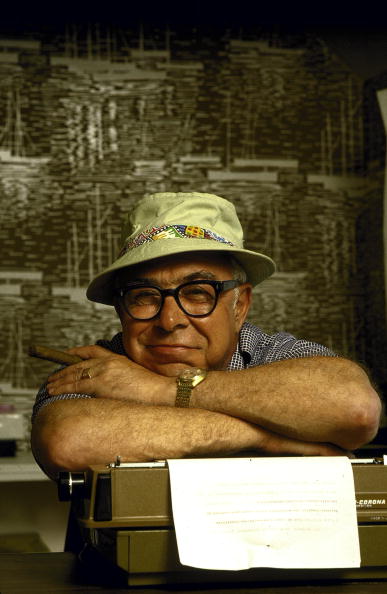 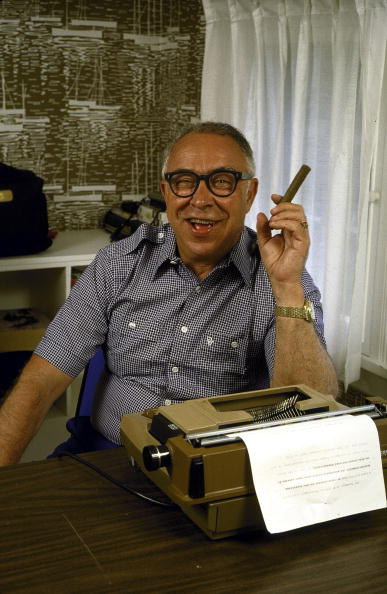 Ten years later, in 1993, the typewriter had gone, allowing Art to put his feet up his desk. But is he truly happy without the machine he so eagerly and fondly used for so many years? 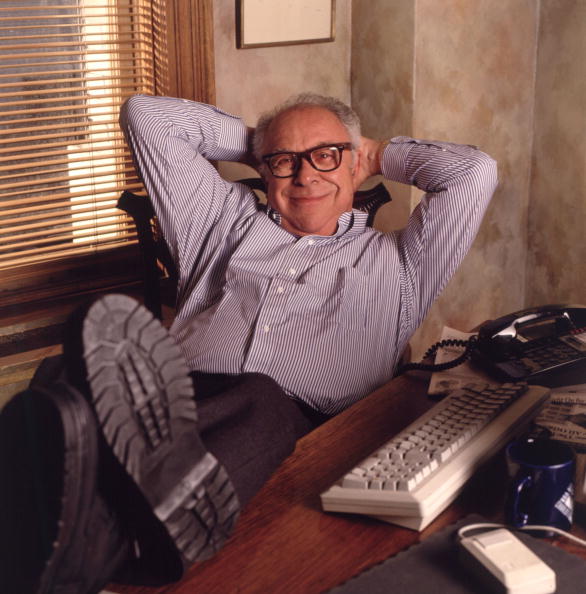 Arthur "Art" Buchwald, one of my favourite columnists as a budding young journalist, was an American humorist best known for his long-running column in The Washington Post. His column was syndicated to many other newspapers. It focused on political satire and commentary. Buchwald received the Pulitzer Prize for Outstanding Commentary in 1982 and in 1986 was elected to the American Academy and Institute of Arts and Letters. 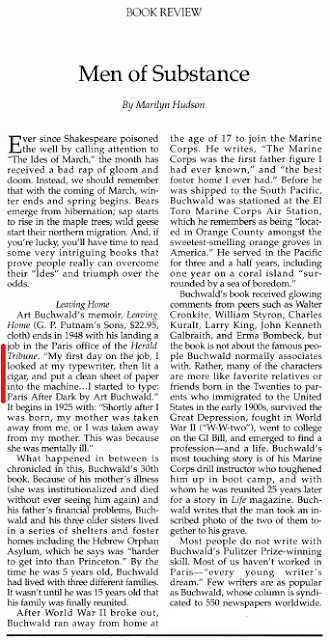 Buchwald died of kidney failure in Washington on January 17, 2007, aged 81. A very astute observer wrote at that time, "With Buchwald's death, we see not just the death of a great talent, but also, literally, the end of an era. Buchwald wrote by hand and on a typewriter. That's not how we do it now. Much more is expected -video, podcasts, writing. Would even a young Buchwald be able to master and keep up with the emerging demands of the e-journo landscape?"
Here is a syndicated Buchwald column from 1975. I doubt if anyone would get away with writing this sort of stuff in this politically correct era. Whatever, they most certainly wouldn't have the skill: 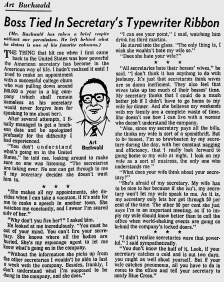 And a 1983 column:
It's downright un-American
I have a confession to make, and the sooner it gets out in the open, the better I'll feel about it. I don't drive a car.
Americans are broad-minded people. They'll accept the fact that a person can be an alcoholic, a dope fiend, a wife beater, and even a newspaperman, but if a man doesn't drive, there is something wrong with him.
Through the years I've found it very embarrassing to admit it to anyone, and my best friends tend to view me with suspicion and contempt.
But where I really run into trouble is when I go to a store and try o make a purchase with a check.
It happened again last week when I went to a discount house at a large shopping center in Maryland. I wanted to buy a portable typewriter, and the salesman was very helpful about showing me the different models.
I decided on one, and then I said, "May I write out a personal check?"
"Naturally," he said kindly. "Do you have any identification?"
"Of course," I said. I produced an American Express credit card, a Diner's Club credit card, a Carte blanche credit card, a Bell Telephone credit card, and my pass to the White house.
The man inspected them all and then said, "Where's your driver's license?"
"I don't have one," I replied.
"Did you lose it?"
"No, I didn't lose it. I don't drive a car."
He pushed a button under the cash register, and suddenly a floor manager came rushing over.
The salesman had now become surly. "This guy's trying to cash a check, and he doesn't have a driver's license. Should I call the store detective?"
"Wait a minute. I'll talk to him," the manager said. "did you lose your driver's license for some traffic offense?"
"No, I've never driven. I don't like to drive."
"Nobody likes to drive," the floor manager shouted. "That's no excuse. Why are you trying to cash a check if you don't have a driver's license?"
"I though all the other identification was good enough. I had to be cleared by the Secret Service to get this white House pass," I said hopefully.
The floor manager looked scornfully at the pass and all my credit cards. "Anyone can get cleared by the Secret Service. Hey, wait a minute. How did you get out here to the shopping center if you don't drive?"
"I took a taxi," I said.
"Well, that takes the cake," he said.
By this time a crowd had gathered.
"What happened?"
"Guy doesn't have a driver's license."
"Says he doesn't even drive. Never has driven."
"Lynch him."
"Tar and feather him."
"How un-American can you get?"
The crowd was getting ugly, so I decided to forget the typewriter.
"Never mind," I said. "I'll go somewhere else."
By this time the president of the store had arrived on the scene. Fortunately, he recognised my name and okayed the check. He was very embarrassed by the treatment I had received and said, "come on, I'll buy you a drink."
"I forgot to tell you," I said. "I don't drink either."
This was too much, even for him, and he pushed me toward the door.
"Get out of here," he said, "and don't come back!"
And finally one from December 2000:
Toys in the Attic
At Christmastime we can discuss the gifts and other items that never worked, which every man treasures and every woman wants to throw out.
All cellars and attics are stuffed with things that were never put together or, if put together, never worked.
Dickerson took me up to his attic to show me his "treasures."
He held up a VHS machine. "It's from a very reliable salesman. When I bought it, the man said it would last forever. When I took it back, the man said his store never takes back merchandise. I had no choice but to put it in the attic."
I said, "Is that a TV set?"
"Yes -- it used to work in the '70s, but then it stopped so I decided to put it up here."
"Why?"
"Someday I can use it for spare parts for the set I have downstairs. I always feel bad when I throw anything away that I could use someday."
"Do you know how to fix a TV set?"
"It's all in this manual that I have up here. Ida makes fun of me, but she doesn't understand electronics. This is my microwave oven. It died after I tried to heat a can of Campbell's soup. They told me it would cost $123 to fix it, so I keep it here where it will be safe."
"That makes sense."
"This is a toy firetruck. It came missing six parts so I never got it to run. This is a collection of cameras that don't work, and pretty soon I'll have the best collection of broken cell phones in the neighborhood. Over here on this clothes rack are things I bought from catalogues. Nothing fit me."
"Why don't you send them back?"
"I hate to wait in post office lines."
At that moment Ida came upstairs. "Are you showing off your seven-year-old computer?"
"Not yet. I still haven't shown him my 35-year-old Remington typewriter that I haven't used for 15 years."
I asked, "Are those shotguns over there?"
Ida said, "Yes, but they don't work. Everything up here doesn't work, but he won't get rid of any of it. Would you believe he still has his roller skates from his youth? The only thing I won't let him keep are letters from his old girlfriends."
When Ida wasn't looking Dickerson winked at me, pointed to a lock box, and mouthed, "In there." 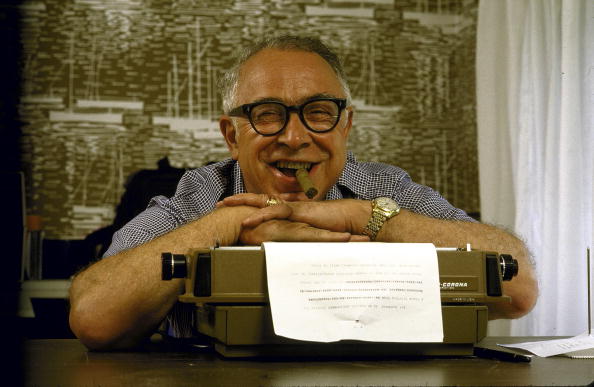 RIP
Posted by Robert Messenger at 11:28

Both the article about trying to buy the typewriter and his friend's attic were hilarious. I had never heard of Art, but then again I don't keep up with newspapers (or the news in general). Sad to see he eventually quit the typewriter. I love it when I see reporters that kept to it even when PC's were widely used.

Great article. I learn more from your blog than most anywhere else!

I've always loved Buchwald, since reading him in the 70's. Thanks for the look back.

Art Buchwald's column in the Washington Post was something I always looked forward to reading during my time on the East Coast from the late '60s to late '70s. He was a great writer!