On This Day in Typewriter History: The Hammond Folding 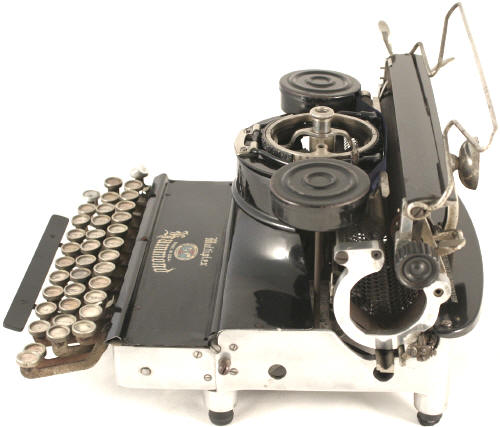 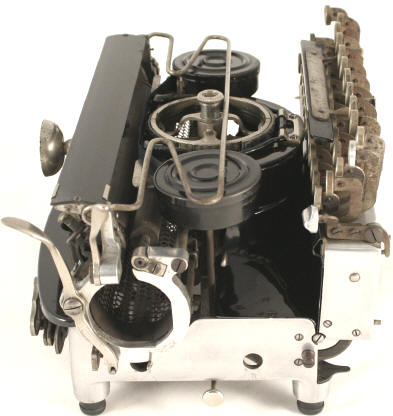 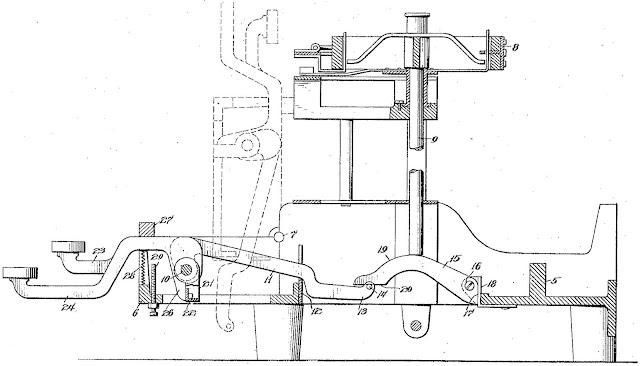 Noack's design assigned to Hammond
Credit for the design of the Hammond Folding Typewriter has been given to Carl Otto Noack (born Sagan, Germany, August 20, 1861), and Noack certainly started work on this model in early 1921.

But at each stage of the machine’s development, through to its appearance in 1923, Noack freely acknowledged that the original design had been patented by another German-born mechanical engineer, Edward Krusius. 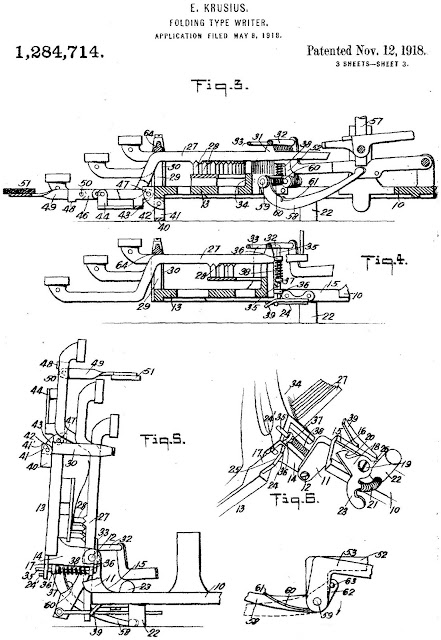 Note the distinct similarities between Krusius's design (above) of 1918 and that of Noack (below) three years later. 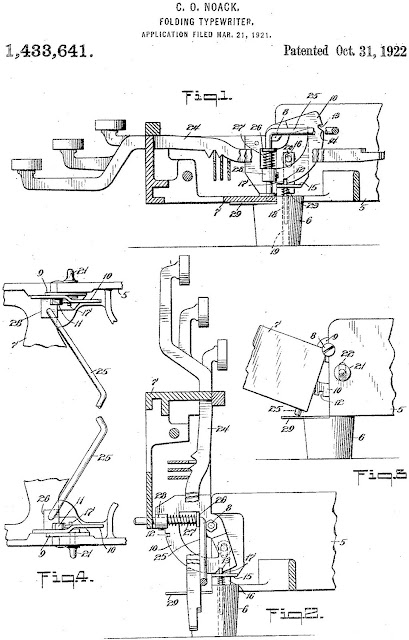 Krusius, who was born in Germany in April 1863, immigrated to the US in 1888 and at the turn of the century worked as an “inspector of typewriters” in Manhattan. He was later a typewriter repairer and eventually left the typewriter industry to become a surgical instrument maker. 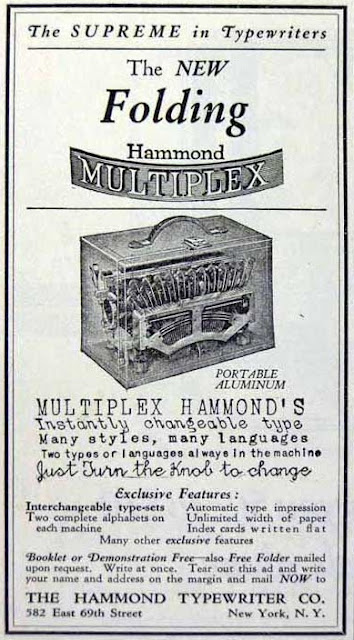 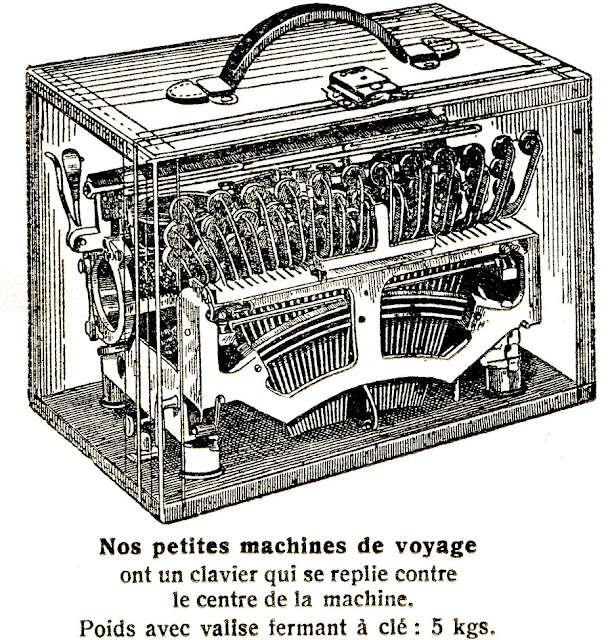 The above image courtesy of Georg Sommeregger
When Krusius applied for his patent in May 1918, it was unassigned and does not mention the Hammond in its specifications. However, it would seem from the application drawings that it was a Hammond he had in mind with his invention. 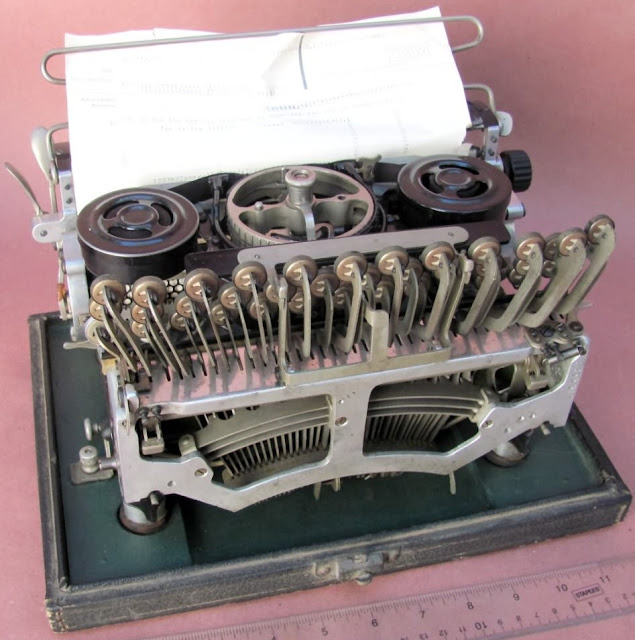 This image is advertising a Hammond Folding for sale by Larry and Carole Meeker at Meeker's Mechanical Nature Antiques. See here.
Krusius’s patent was granted six months later, but it wasn’t until March 1921 that Noack took it up on behalf of the Hammond Typewriter Company.
Noack renewed his applications on this day (October 2) in 1922 and the following year the Hammond Folding (Model 26) went into production.
Noack immigrated to the US in 1886 and became naturalised six years later. His earlier employment had been with the New York Lock Company, designing locks around the turn of the century. Noack continued to describe himself as a mechanical engineer throughout the latter part of his career. 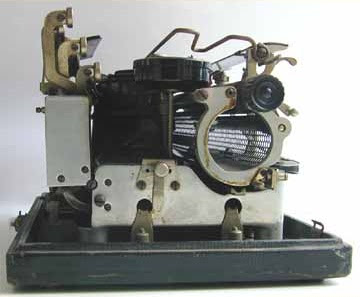 At the Virtual Typewriter Museum, Paul Robert tells us that the Hammond Folding was to be the last of the Hammond typewriters (and the only one that, for obvious reasons, could not be made with a semi-circular keyboard). Four years later the Hammond became the VariTyper. “The Hammond Folding was a Hammond Multiplex with two type shuttles that could be turned around for immediate use. Two buttons on either side of the keyboard unlocked the keyboard and allowed it to be turned up. In folded position, the lid of the case slid over the machine, making it easier to carry. However, the Folding Hammond was a complete office-size Hammond Multiplex, so although it folded into a less clumsy package to drag around, the machine could hardly be regarded a 'portable' typewriter.” 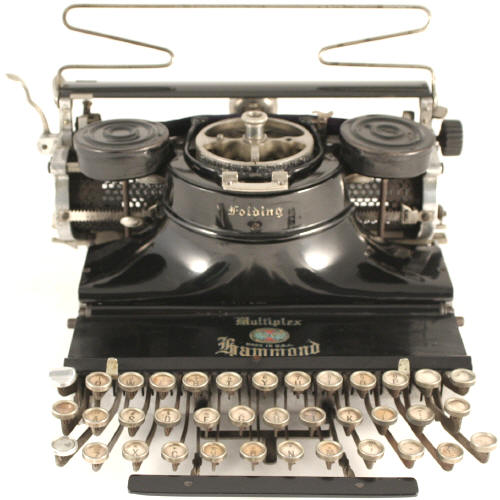 Posted by Robert Messenger at 10:39

If there was ever a Hammond I wanted, it is the Folding. It is such a great looking machine, and the folding feature just tickles my fancy.

I have one and I consider it truly portable -- it's lightweight and compact.

drool, drool - on my wishlist now.

Oh my! How cool is that machine. I don't want one, but it strikes me as being a very worthwhile addition to any collector's machines

Nice post; one of my want-to-haves. Do you have any idea why it is called "model 26"? Not all foldings have the model 26 decal, right? Do you know why?

Oh, how I want one now that I know Hammond made a folding typewriter. It is one very nice looking machine. I think I like it better than the Corona.