On This Day in Typewriter History: The Imperial Doppelgänger - When One Typewriter is Never Enough 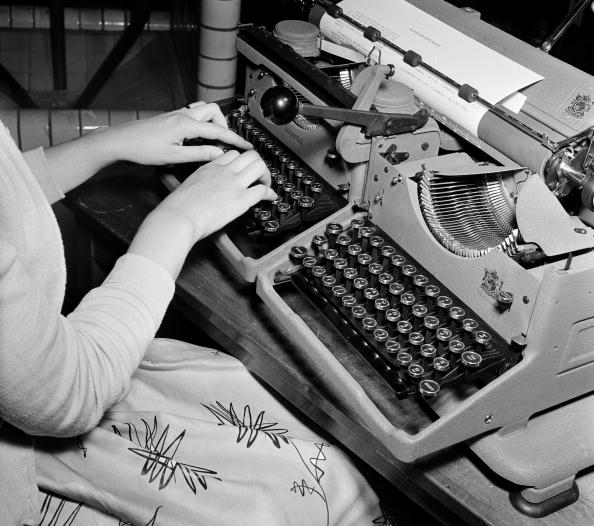 In 1957, the Imperial Typewriter Company of Leicester in England was finally able to perfect and thus demonstrate this “special design of a twin keyboard typewriter”. It was to be “used in the science field [so] reports can be typed on the left keyboard and calculations are made on the right keyboard, as it comes with additional symbols.”
The original concept was for a second (or indeed third) keyboard to employ “different characters, such for example as mathematical or chemical symbols or the characters of a foreign alphabet”. A “common carriage unit [would be] bodily displaceable into operative association with any selected unit”. 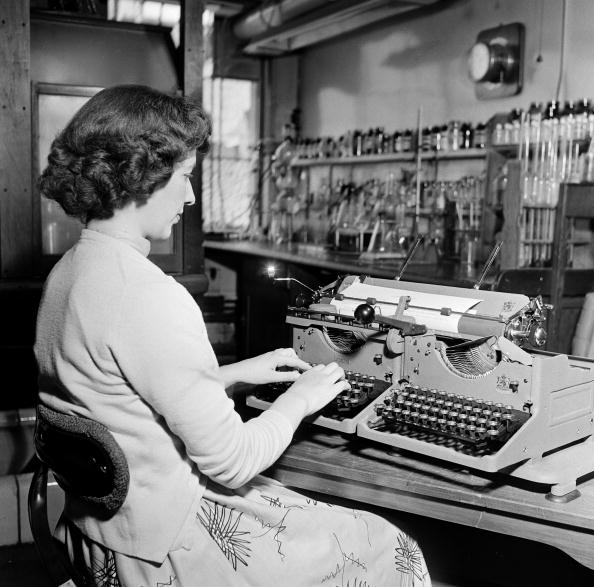 Claude Wellington Robert Brumhill had first patented this design in England in 1949, toward the end of his eight-year stint as lead design engineer for Imperial in Leicester. It was the acme of his achievements for Imperial. He had applied for a US patent for the double (and triple) keyboard in 1950 and the patent was issued in 1954. 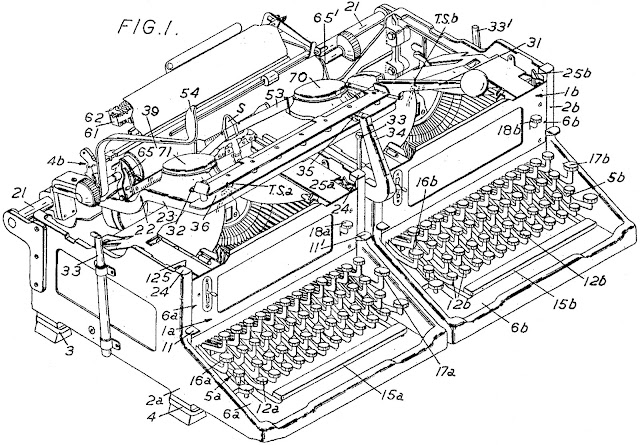 Brumhill had 10 patents for the Imperial Typewriter Company granted in the US from 1942, one of them (for a ribbon guiding means) on this day (October 24) in 1945. In the latter part of his career, Brumhill worked closely with Arthur Bott Pateman, who succeeded Brumhill as Imperial lead design engineer in 1950. Pateman went on to become managing director and then chairman of the Imperial Typewriter Company. 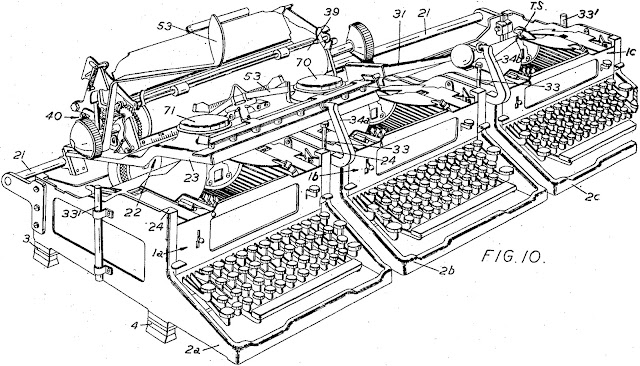 Three typewriters all in a row
Brumhill was born at St Neots in Huntingdonshire in 1892 and began working as a mechanical engineer and tool maker at Imperial’s Leicester factory in 1910. This was the year Imperial founder Hidalgo Moya  tracked down Swedish-born mechanical engineer Eric Julius Pilblad (born Köping, April 12, 1880; died 1963), who was at that time working on a Canadian government contract with the Sutherland Rifle Sight Company in New Glasgow, Nova Scotia. Pilblad, who had immigrated to the US in October 1900, had apparently had considerable experience working in the typewriter industry in America. In 1911 Pilblad began working alongside Moya in Leicester, and later with an English engineer, Arthur Tomlinson, before returning to the US in 1925. At that point Tomlinson succeeded Pilblad as Imperial lead design engineer, to be succeeded in turn by Brumhill in 1942. 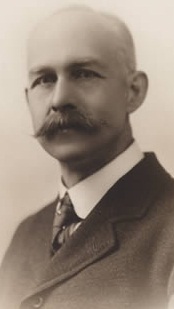 After Moya's return to the US (around 1919), Pilblad and Tomlinson worked under William Arthur Evans (above) as Imperial board chairman until 1933. Tomlinson, Brumhill and Pateman then all worked under Evans' son, Roger Martin Evans (below, 1907-1967), who was Imperial's works director and chief production engineer. 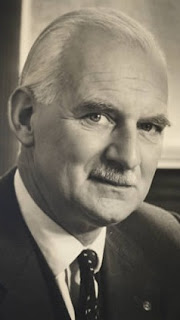 The Brumhill double keyboard invention was not entirely wasted and was referenced a number of times, most notably in 1990 by none other than “The United States of America as represented by the Department of Health and Human Services”. This was for – and catch your breath before reading on - an “Automatic orientation of predefined chemical structures in conjunction with a computer terminal employs respective protocols corresponding to a system state. The system states can include a chain state, ring state, library state, and retrieve state. Upon orientation, the object is attached according to a specified attachment command to a parent graph. The protocols corresponding to connection of the object to the parent includes rules regarding angles at which the structures can be attached to one another, and another protocol governs rules respecting rotation of the stored object through predetermined angles. Nodes of the object recalled are automatically provided with markers in alphabetic order from the most recently used marker corresponding to a letter of alphabet. Multiple alphabet sequences are used. Specification of position is indicated by inputting the lower case letter of the alphabet corresponding to the location desired. Bonds can be specified between two markers.” And that’s just the title!
A double keyboard, I suppose, might be preferable to this, a situation demonstrated by American actress Barbara Hale in 1956: 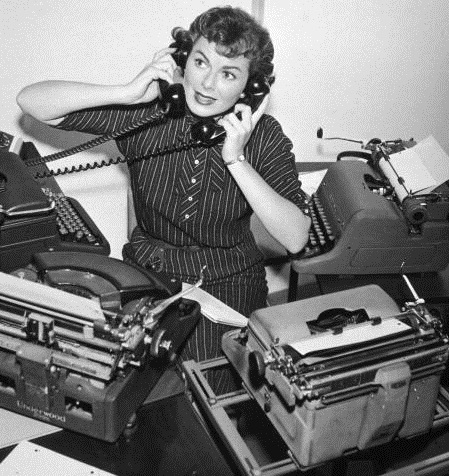 Posted by Robert Messenger at 11:06

I have got to get my hands on one of these...and then develop more hands to use it quicker! I've never heard of anything like this, and the idea is really exciting and unique. Can't wait for one to pop up on eBay!

Alright, so she has a Royal HH, an Underwood Noiseless...and 2 Royal KMM's? Hmm... Great photo!

I think I've either seen or at least heard of a triple typewriter with one shared carriage, for meteorogical use.

Sort of thing you wake to from a dream. Imagine twenty, a hundred Imperial typewriters hooked up. Big enough for the carriage rails to become affected by heat expansion and... the curvature of the Earth.

I suppose the clockwork motors would have to be beefed up to cope with Long Distance travel too!

I have actually had my hands on one of these and typed on it. It's in a private collection. At the time I thought it was the damnedest thing I'd ever seen.

Just when I think I've seen it all...

The double typewriter should have been called "THE GEMINI"!

I can't believe no one has said it...

Here in the UK they've recently started issuing DVD compilations of short colour films first shown
in cinemas in the 1960's, called "Look At Life".
These twin keyboard typewriters are shown being used in at least two of these films - the one I'm
watching at present, is "Why All the Rush" on disc 2 of the Cultural Heritage compilation.
The actual topic is holidays from work, and so various types of
work are being shown. Although this could be a demonstration film shot in an office environment
as various other types of typewriters are also shown being used in the background.
michael adams london

Following on the above post here
is a screen capture from the
above.

The sequence only lasts about three seconds in all. It's the poster on the wall showing the typewriter, which also lead me to suppose this sequence was in its turn borrowed from an existing demonstration or publicity film.

I just got one of those. It had been chucked out by somebody! At the moment it looks quite dirty and I don´t know yet how to switch from one keyboard to the other. But I think I can put it to work easily. It just looks in perfect conditions. Anyone interested in buying it?

Shortly after encountering this page, I learned that IBM produced the Model C Tandem which used two of their Model C electric typewriters for the same purpose, using the same principle.

I have one of these. It is green and is/was used for typesetting science journals.