On This Day in Typewriter History: Unresolved Issues - the Blick Ninety 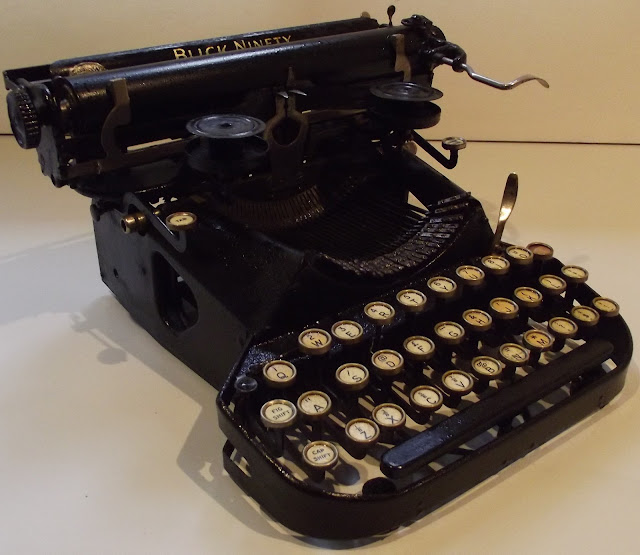 This Blick Ninety, serial number E-1156, will soon be winging its way from Canberra to Cincinnati and into the care of Richard Polt. It is being gifted to Richard as a "thank-you" for all his past help and encouragement.
It once belonged to the late British collector Les Owen, and was part of Les's Landbee Collection, where it was replaced by another model, serial number K996 (see below). Another British-owned Blick Ninety has the serial number K942.
The exact sequence of events which led to the emergence in December 1919 of a small, three-bank non-folding, typebar portable typewriter called the Blick Ninety, and its subsequent name change to the Roberts Ninety, has intrigued typewriter collectors and historians for many years now. 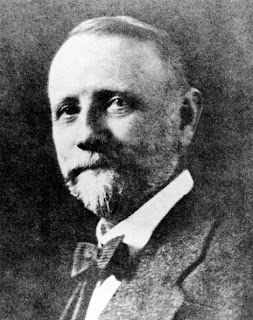 George C.Blickensderfer
The Blick Ninety, of course, takes its name from its 90 characters and from George Canfield Blickensderfer, who died suddenly in Stamford, Connecticut, on August 15, 1917. The Roberts Ninety takes its name from Lyman Resolved Roberts, who died suddenly at Rutherford, New Jersey, on December 21, 1921. The two men were born in the same county, Erie, Pennsylvania; Blickensderfer in Springfield Town, Roberts in Corry (to Wagar Lyman Roberts and his wife Louisa). But they were born almost 17 years apart, Blickensderfer on October 30, 1850, and Roberts in 1867. And there was a country mile between their ideas about typewriter designs. Both preferred small, lightweight, simplistic portables, but one leaned toward typewheels while the other thought his own detachable typebasket was a seller. 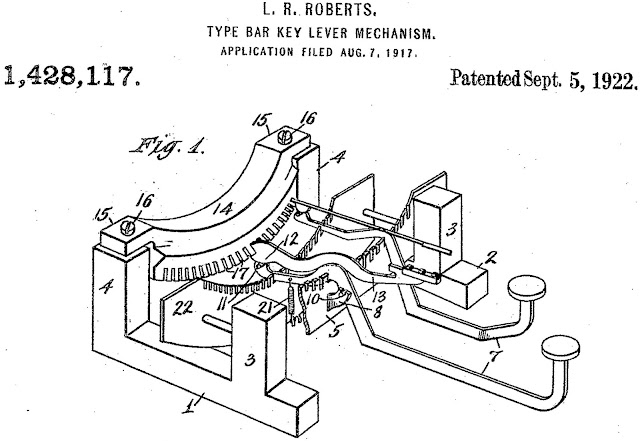 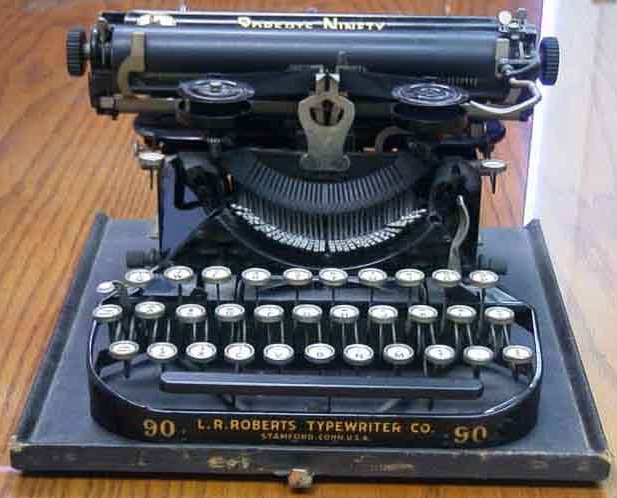 This rare Roberts Ninety is in Herman Price's Chestnut Ridge Typewriter Museum in Fairmont, West Virginia  It is dated circa 1922. Please note the decal, "L.R.Roberts Typewriter Co, Stamford, Conn".
Lyman Resolved Roberts designed the typebar Blick Ninety-Roberts Ninety. He called it the Blick Ninety, but it's debatable whether he later called it the Roberts Ninety. That was more likely done by railroad builder Chauncey Loomis Allen, in 1921, just before Roberts died. Allen, who was born in Syracuse on January 16, 1870, died in Alfred on September 7, 1941. 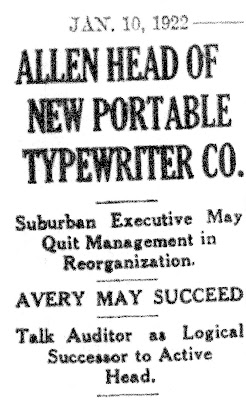 Roberts began applying for patents for the Blick Ninety the very week Blickensderfer died. He assigned his patents to the L.R.Roberts Typewriter Company of – wait for it – Stamford, Connecticut.
Confused? Join the club. It already has a large membership!
I cannot fully unravel this mystery. All I can do is provide some background information, some circumstantial evidence, which may help put things in a proper perspective. 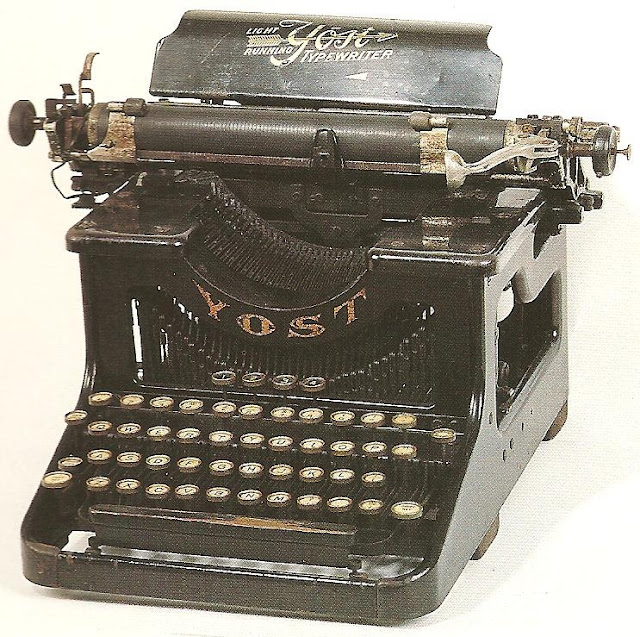 In 1904 Roberts was working with Charles Wellington Walker in developing the Yost Visible typewriter under the umbrella of the Union Writing Machine Company. See my post on it here.
The next year Roberts switched camps to Underwood, and spent 11 years designing typewriters and typewriter components for that company. His last major project for Underwood was on an “automatic typewriting machine”, on which he collaborated with Charles Leonard Davis.
An earlier Roberts typewriter patent, for a platen bearing, applied for when he was living in Detroit, was issued on this day (October 8) in 1907, giving me my excuse to write about Roberts. 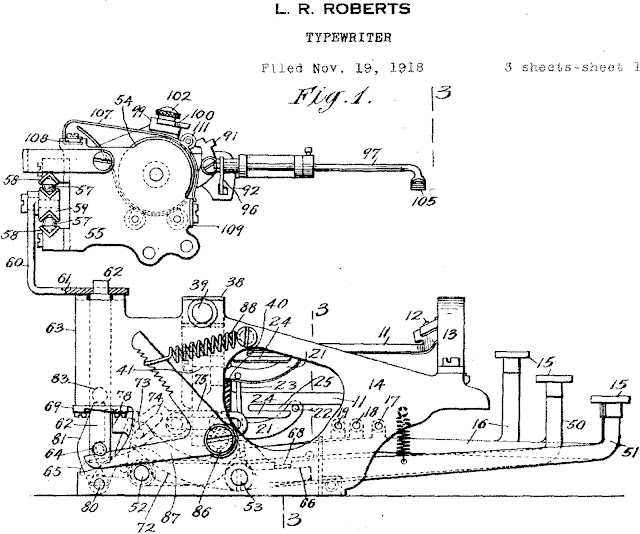 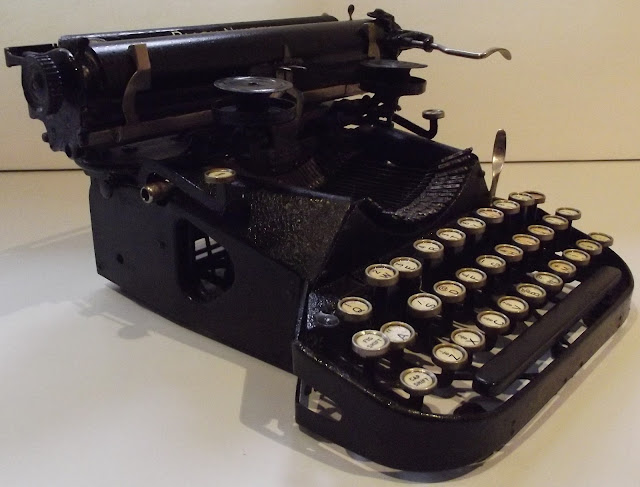 In 1917 Roberts struck out for independence. He had his own portable typewriter in mind, and he wanted it built. The evidence strongly suggests that with Blickensderfer’s sudden death, Roberts saw an opportunity. The Blickensderfer company, which had been struggling through World War I, was suddenly leaderless and in some disarray, and a factory lay begging, with its neglected typewriter tools and dies. There is no documentation to indicate Blickensderfer had any dealings with Roberts before Blickensderfer died, although Blickensderfer had already started dabbling in typebar typewriters.
So what did happen next? 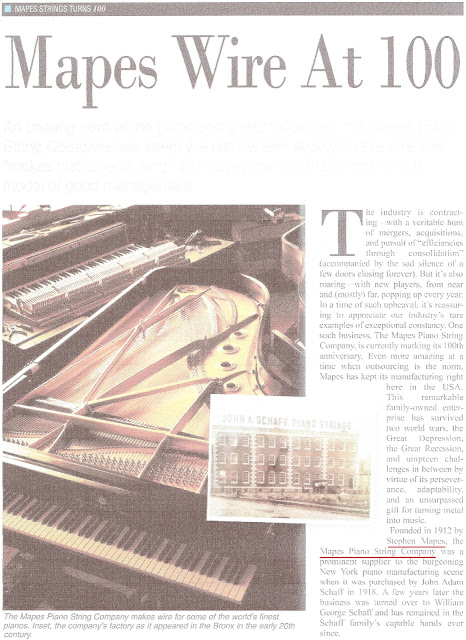 The Mapes Piano String Company, "an unsung hero of the piano and guitar industries", celebrated its centenary in February this year, still "supplying the wire that makes instruments sing" . It has outlived the Blickensderfer typewriter company by 93 years, although Stephen Mapes had sold his own company in 1912 in order to invest in Blickensderfer. The Mapes piano string company is said to be "a model of good management", which is more than can be said for Blickensderfer.
In 1917 Stephen Simonson Mapes (born  Fishkill-on-the-Hudson [Beacon], New York, March 8, 1868; died October 1924), a Beacon, New York, banker and financier, sold his interests in his own Mapes Piano String Company in the South Bronx to John Adam Schaff, in order to re-invest his money in the Blickensderfer Manufacturing Company.
Upon George Blickensderfer’s death, Mapes became the company’s new president and, with Blickensderfer’s younger brother, William Jacob Blickensderfer (July 5, 1853-), was the executor of George Blickensderfer’s estate. William Jacob Blickensderfer was vice—president and treasurer, and later took on the general manager’s role under Lyman Roberts when Mapes retired and withdrew his capital in 1920.

George Blickensderfer's automatic gun
During World War I, Blickensderfer manufacturing had concentrated much less on typewriters, for which the export market had collapsed. Blickensderfer typewheel portable typewriter production dropped from an average of 7200 over the preceding three years to 5600 in 1915, and to 5000 in 1916. In the next two years, only 8100 more of these typewriters were made.
But Blickensderfer had saved the company by developing an automatic gun and a cartridge belt feeding machine on a contract to the French government. When he died, the war was still raging in Europe. The first act of Mapes and William Blickensderfer was to push through patents for the gun and cartridge feeding machine, which George Blickensderfer had applied for in March 1917, just five months before his death. In The Five-Pound Secretary, it is stated that these patents are “not known”, but they are easy to trace (numbers 1290828 and 1358700). 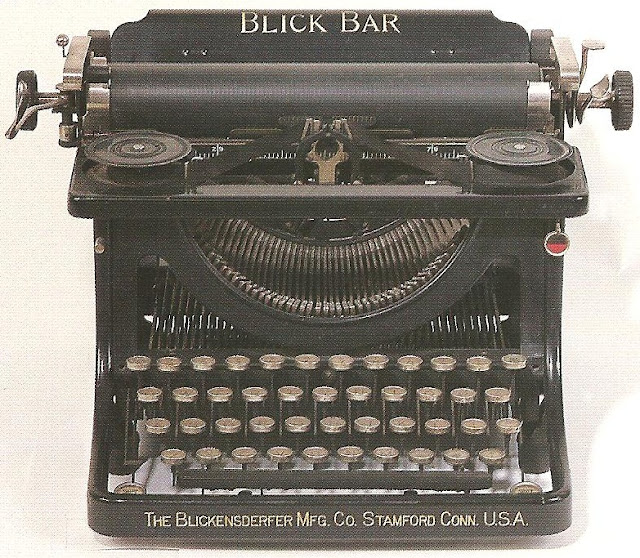 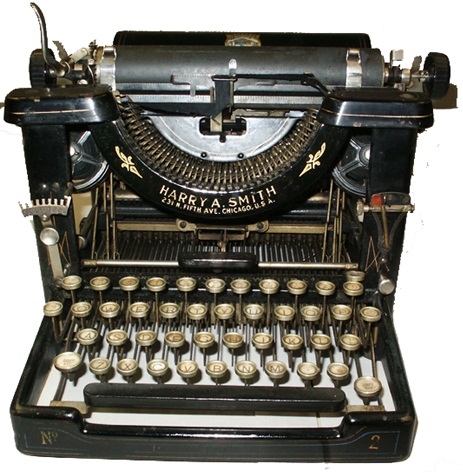 Harry A.Smith typewriter, Herman Price's Collection,
Chestnut Ridge Typewriter Museum, Fairmont, West Virginia
Blickensderfer’s death “threw the [Blick-Bar] undertaking into complete discord and much money was lost through its unprofitable disposition to other interests [Smith]”.
George Blickensderfer had had ideas that the Blick-Bar would see him through a period in which there was no further advances on his typewheel machines, which had been languishing for four years. But the outbreak of war in Europe also seriously curtailed his export plans for the Blick-Bar. Nonetheless, Blickensderfer continued to hold on to high hopes for its success right up until his death. 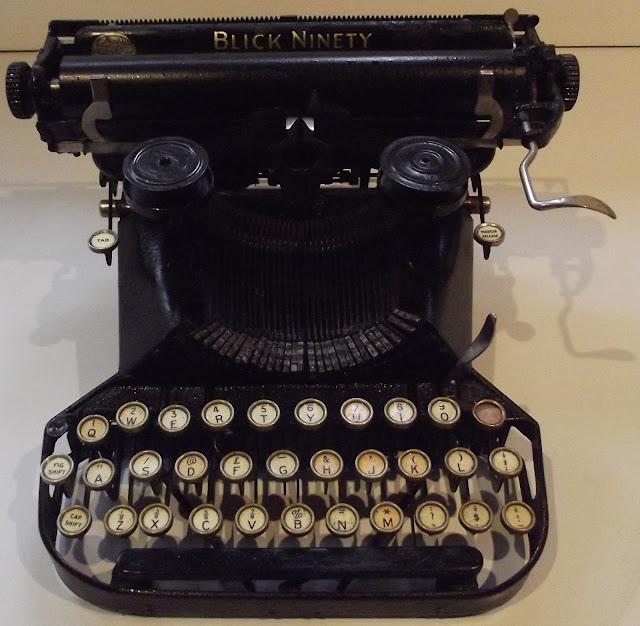 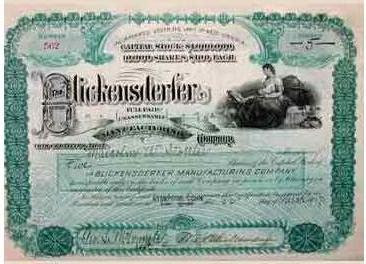 The name of the Blickensderfer Manufacturing Company was changed to the Blick Typewriter Company, apparently sometime in the second half of 1919, two years into Mapes’ presidency. It was at this point that Mapes and William Blickensderfer decided the more secure path ahead lay in typebar portable typewriters and sold the Blick-Bar rights (cheaply, it seems) to Harry Smith. They needed a new design. Lyman Resolve Roberts provided. But the decision to “practically discard” Blickensderfer typewheel machines was one industry publications lamented (Remington briefly resurrected the Blick 5 in 1927). 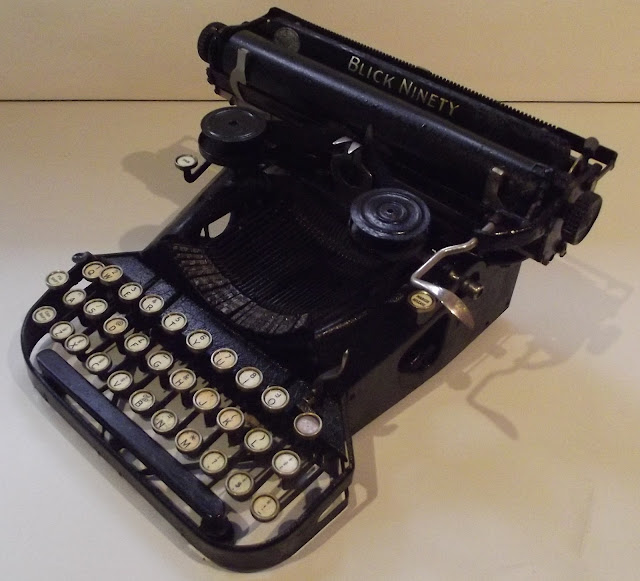 The unresolved question here is this: At what point did the Blick Typewriter Company became the Roberts Typewriter Company? Or did the two companies operate separately but  concurrently in Stamford? When exactly did the Blick company cease to be in Stamford? Most likely it was in 1920, when Stephen Simonson Mapes retired as president and withdrew his capital.
The evidence suggests the Roberts company existed from late 1917, when Lyman Roberts started assigning patents to it, or at least 1918. Roberts continued to assign patents to it right up until a few months before he died. These are not posthumous mesne assignments, or patents assigned by executors, clearly indicating the L.R.Roberts Typewriter Company existed while Roberts was alive and before Chauncey Loomis Allen set up his company in early 1922. 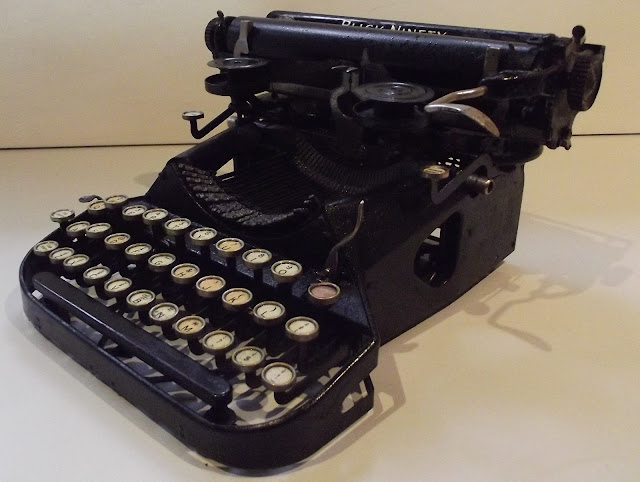 Accepted wisdom is that the Roberts company was formed after Roberts died. Patent evidence refutes this. Roberts assigned nothing to either Blickensderfer or the Blick Typewriter Company. Assigning patents in such cases was usually linked to the designer offsetting the costs of production. The Blick Ninety was being made two years before Roberts died, and a little more than two years (not the widely circulated three years) after George Blickensderfer died.
As for the Blick company, note the past tense in the Syracuse Journal story of January 10, 1922. Allen, it says, “has” been working on the project for “several months”. The Roberts company “has absorbed the old Blickensderfer company”. So the change had occurred before the start of 1922, and during Roberts' lifetime, not after it. Also, the story says the Loomis Allen company “will” put a “new machine” called the Roberts Ninety on the market. Does this not suggest that in January 1922 it was yet to be produced? 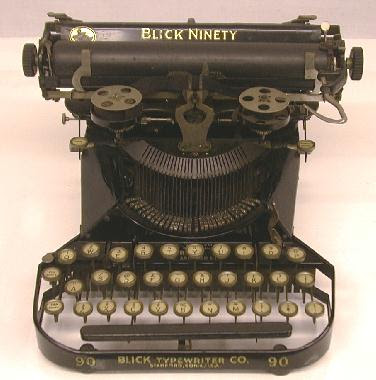 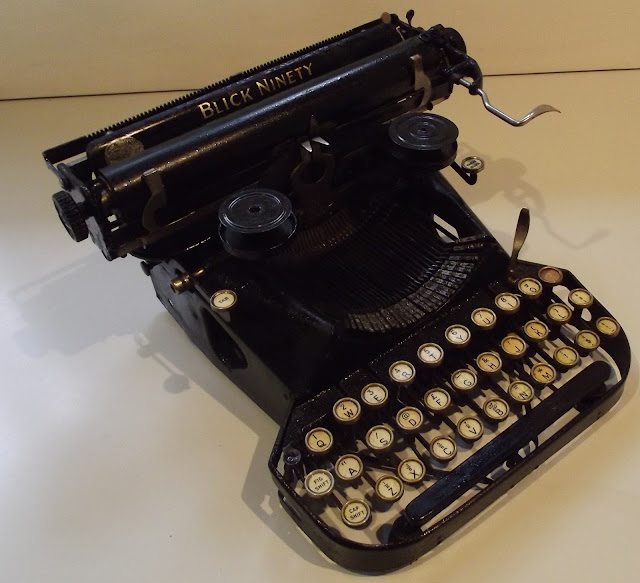 The Loomis Allen-run Roberts company survived until 1924, during which time the Roberts Ninety was produced. The Blickensderfer typewheel patents, tools and dies went to Remington in 1926.
Does this make the Blick Ninety-Roberts Ninety story any clearer? OK! Sorry, about that. I know what you mean …
*Please see Will Davis's story on the Blick Ninety here.

Posted by Robert Messenger at 13:02

Another amazingly in-depth article, Robert! The Blick Ninety is not only a piece of typewriter history, but a fantastic gift. I am sure it will be well received in Cincinnati.

So many posts from you lately...I am in typewriter heaven over here! Thanks for contributing so much time to educate us on the high points in typewriter history. I should hope you have plans for another book soon. So much knowledge should be bound in paper!

Robert, thank you for all this research and -- in advance -- for the wonderful typewriter itself! I am trying to educate myself about it in anticipation of its welcome arrival. I do appreciate it very much.

Seeing that Blick 90 in person was really something special. I'm glad I got to see it before you sent it on from your place Robert!