PART 139
When England’s Poet Laureate Alfred, Lord Tennyson, died on this day (October 6) in 1892, that nation was in a quandary. Who could possibly succeed a poet who had written such lines as, “The old order changeth, yielding place to new”, 71 years ahead of Dylan? (“When you say Dylan, he thinks you're talking about Dylan Thomas*, Whoever he was. The man ain't got no culture …”, Paul Simon, A Simple Desultory Philippic, 1965.) 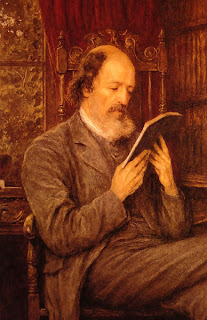 Alfie
Who could take up the quill of a man who had had held it for 42 years, since taking the stead of William Wordsworth? Who qualified to stand in line behind Chaucer, Ben Jonson and John Dryden?
England couldn’t – or wouldn’t – decide. At the height of the prolonged search for the next Poet Laureate, only the 25th in 700 years, various credentials and demands were bandied about. Americans petitioned Queen Victoria on behalf of Jean Ingelow and the English voted for Alice Meynell, but there’d never been a female Laureate (and there wasn’t one until Carol Ann Oates, the present Laureate, anointed in 2009; she’s also the first Scot and the first openly gay Laureate). The public wanted Rudyard Kipling (who didn't like typewriters), Algernon Swinburne was far too republican and William Morris had told them to stick it, in terms roughly along those lines.
In January 1894 the periodical Fun published a letter from “An Unemployed Poet”, who proposed that “the vacant office of Poet Laureate should be in the gift of the London County Council” and that the poet chosen should “publish an affidavit … that he always paid his typewriter the trade union rate of wages”. 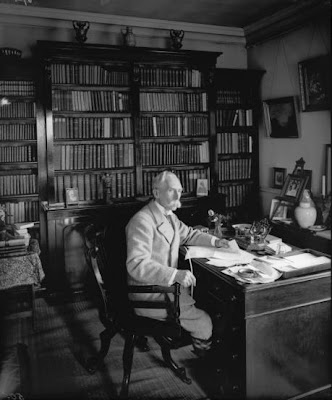 Austin: Not a typewriter in sight!
How seriously that suggestion was taken at the time, one does not know. But eventually, two years later, on New Year’s Day 1896, the Queen’s honours list announced that Alfred Austin had been appointed. And he was – wait for it – a journalist! (He had “pandered” to “baser crafts”.) Worse still he was not, to the best of my knowledge anyway, a typewriter user.
Critics complained that Austin was a literary mediocrity, that he had written disrespectfully of Tennyson as a “namby-pamby”, a poet who lacked manly power and failed to present models of grandeur and greatness to his readership, and that the nation would be subjected to endless political versifying: “Here is the Poet Laureate earning his butt of sherry by writing verses on Dr Jameson and his raiders [a South African misadventure] and publishing them in The Times.’’ Austin was called, “A little of Tennyson and a great deal of water”.
As far as I can tell, the first Poet Laureate, British or American, who was willing to be seen at a typewriter was Robert Penn Warren, US poet consultant in 1944-45 and Poet Laureate in 1986-87. Warren is seen here at his Hermes Ambassador. He also used an Olympia SM3. 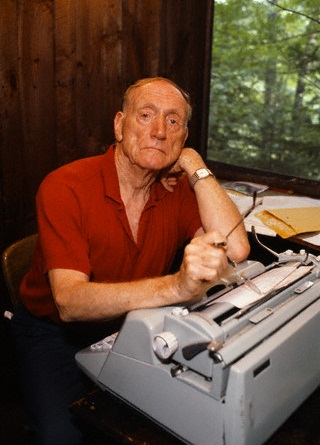 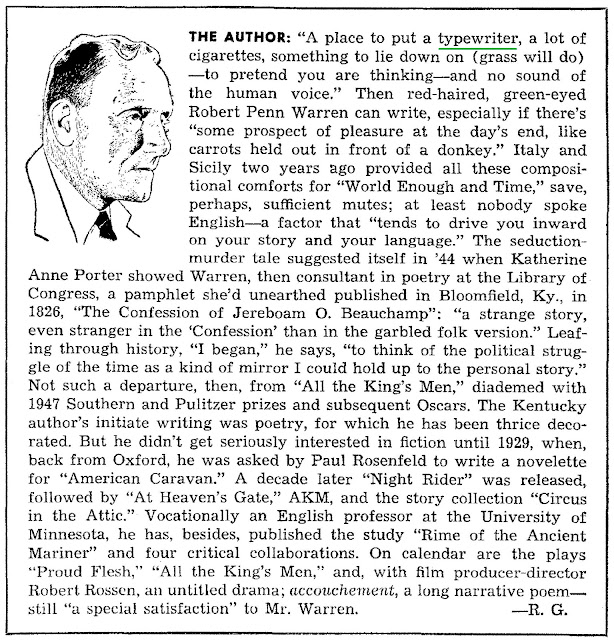 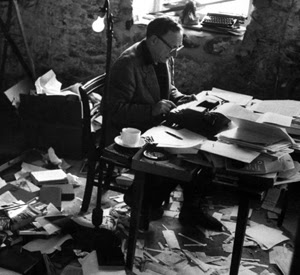 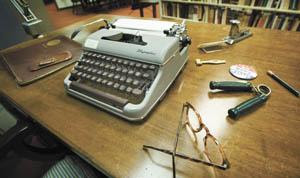 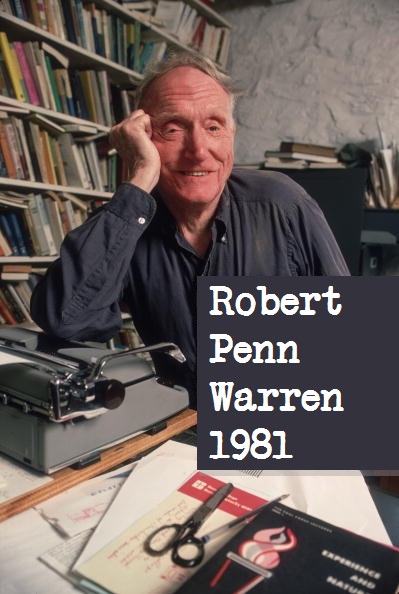 Gwendolyn Brooks was poet consultant in 1985-86. She once told an interviewer: “I write and rewrite and ask myself the sterling question - Is this really what I want to say?  With an emphasis on really and I.  I started using a ball-point pen which is still what I use to this day.  At some point of course, you have to see how what you are writing looks like in print.  At that stage I use an ordinary old-fashioned typewriter.” 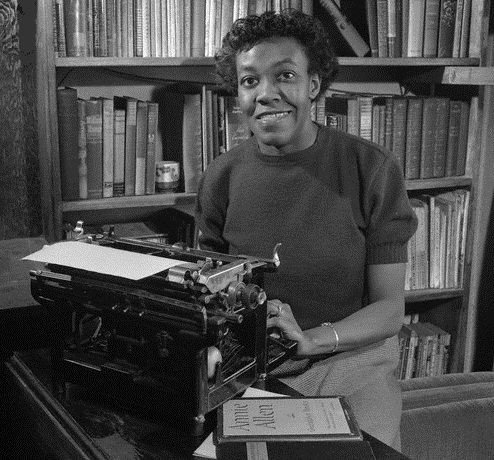 If Australia had an official Poet Laureate, the two leading contenders would BOTH be typewriter users: David Malouf, who published a collection of poetry called Typewriter Music in 2007, and Les Murray, everyone’s favourite to be our second Nobel Prize winner for literature. 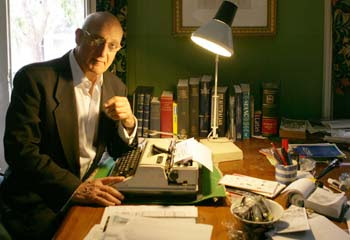 Malouf uses an Erika portable. Not so long ago he told a journalist, "The last time I bought two ribbons for it, they were only $5. I couldn't believe something so precious could be so cheap." 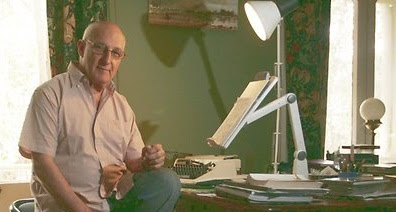 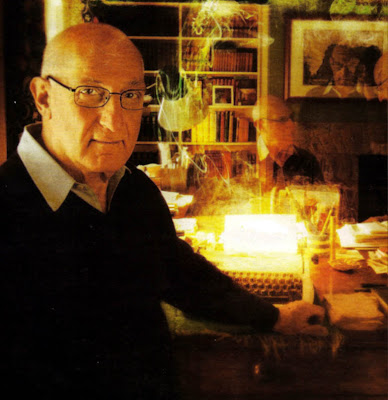 A Paris Review interviewer once asked Murray, “At what point in writing a poem do you move from long-hand to typewriter keyboard?”
MURRAY: “I can't compose on a keyboard till composition reaches the stage where it's half editing. Then I find the keyboard indispensable. But there's also a stage before handwriting when I compose on the page of the mind. That's a vital stage for my imagination, when it's freest. I often don't have many drafts in handwriting; usually it's just one or maybe two. The drafts before that are in the mind; the ones after are typed, scribbled on and retyped. One more retype the next day will often solve hiatuses and infelicities you didn't even realise were there. Misgivings, too. Sometimes only the appearance of near-finality will let you see that something's wrong in a poem and that it needs recasting. You've been too hotly in the aura of it to notice, perhaps.” 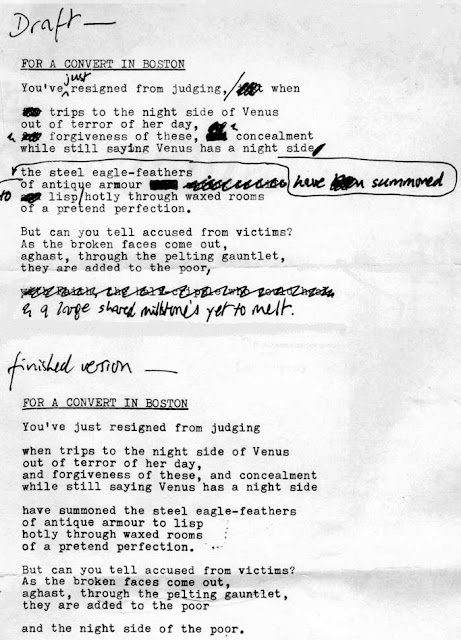 INTERVIEWER: “As someone whose poems suggest a certain fascination with machines, why haven't you migrated from typewriter to computer?”
MURRAY: “The computer isn't a machine, it's a traffic with spirits. I'm no good with keyboards and I'm private enough not to want everything I write or miswrite being open to surveillance forever in the akashic record of cyberspace. Writing on the computer is a bit like sculpture: You sculpt the poem on the screen. Or it's a kind of patchwork; then all the patches disappear and you've got something where all the elaboration and work that has gone into it has vanished. The poem looks as if it's been published, but old mistakes still come up ghostlike from behind the process.”
*Actually, Dylan Thomas never was made Poet Laureate, but perhaps he should have been. 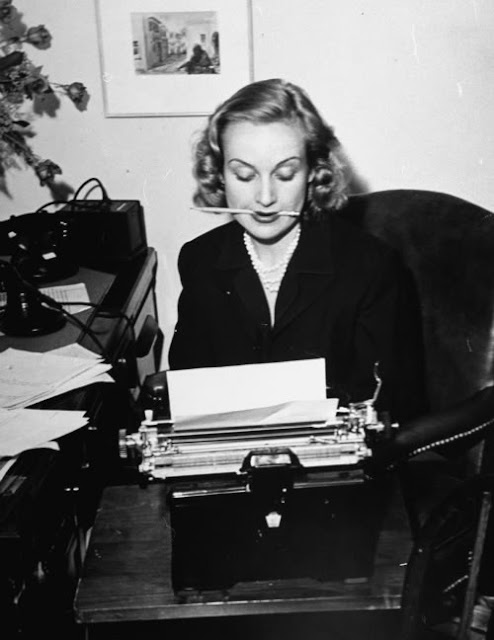 Posted by Robert Messenger at 23:28

That quote from Les Murray is excellent (and taught me the very interesting word "akashic").

How did a photo of the normal condition of my radio room show up (after the Saturday Review title)???

I too like Murray's quote. I had to for the word in my dictionary.

Damn right the last Poet Laureate to use a typewriter used an SM3!

A great article. I don't really get into poetry, but outstanding writing of all sorts deserves recognition.