On This Day in Typewriter History: Demounting to Australia 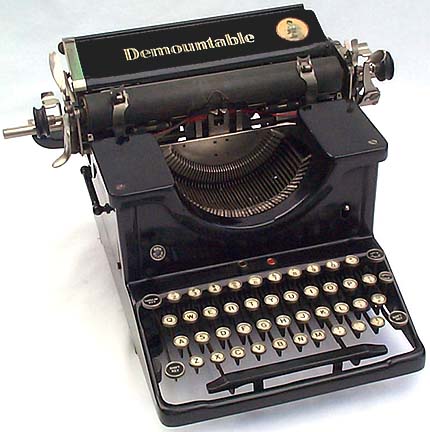 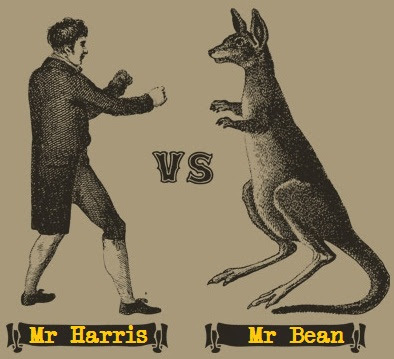 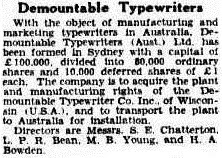 The Argus (Melbourne), March 6, 1937
This is no joke, it was seriously being considered, and good money was being thrown at the scheme. But if one rates it as a kind of Mr Bean idea, that’s pretty close to the mark. 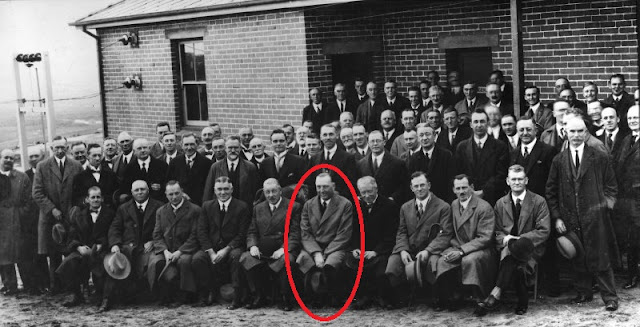 Mr Bean (circled) at the official opening of 2BL
transmitting station, Coogee, Sydney, July 5, 1926
One of the promoters of this "demounting to Australia" project was Leslie Percival Reed Bean, who in 1919 had started L. P. R. Bean & Co Ltd at 229 Castlereagh Street, Sydney. Bean was an importer of radio and telephone equipment from the Stromberg-Carlson Telephone Manufacturing Company of Rochester, New York. By 1923 Bean’s company was manufacturing some equipment locally and importing Stromberg-Carlson radio products. Before the end of that year Bean was producing five models of valve radio and one crystal set under the Audiola brand. In 1927 the company became Stromberg-Carlson (Australasia) Ltd. 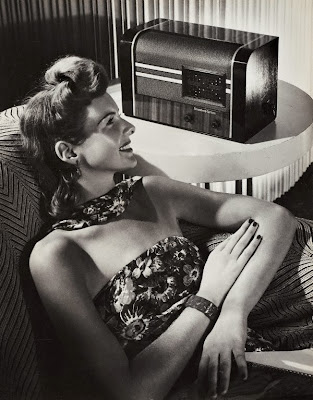 Listening to a Stromberg-Carlson radio in Sydney in 1936
But the Demountable Typewriter Company demounting plan starts to makes some sense when one considers the history of the Demountable typewriter. 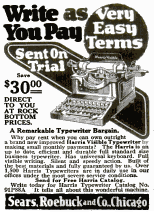 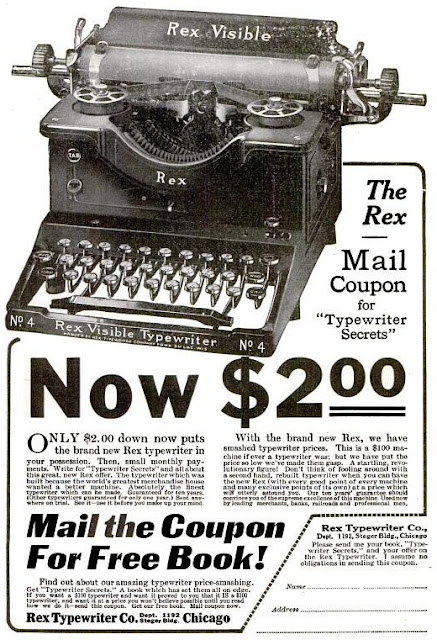 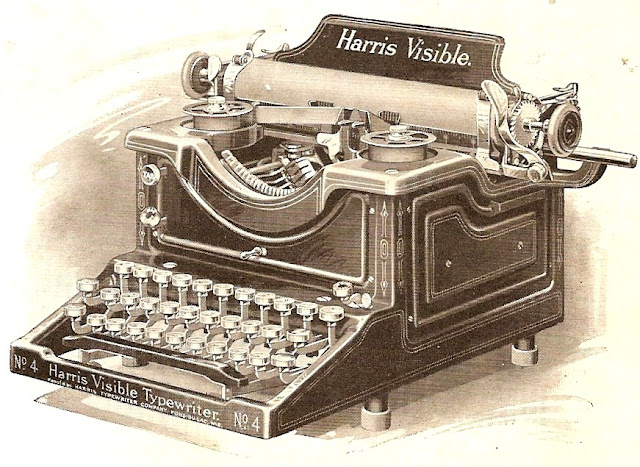 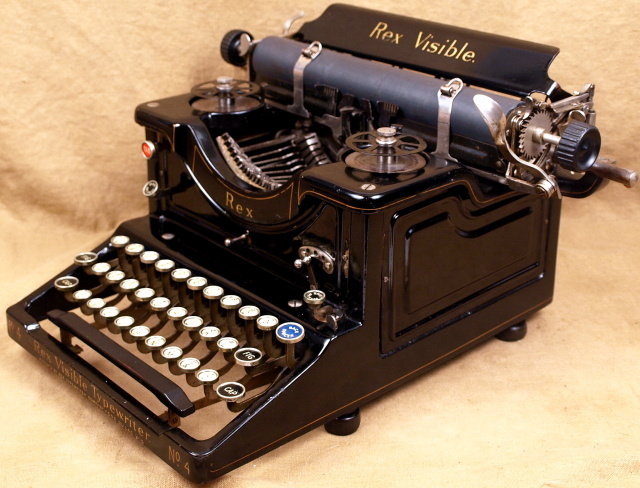 Sold by Scott McNeill, Vintage Typewriter Shoppe
The Harris Visible/Rex were designed by Texas-born De Witt Clinton Harris (1876-1941), a man named in honour of an early 19th century Texas pioneer. The later De Witt Clinton Harris had by 1911 settled in Fond du Lae.
Starting in 1921 Harris, who had moved to Pineland, Florida, completely re-designed his typewriter, as the Demountable.

Will Davis, a great admirer of Harris’s work, has paid tribute to the “brilliance in conception, execution and manufacture” of his machines.

The driving force behind the Australian Demountable proposition was the chairman of Woolworths in this country – Stanley Edward Chatterton, of Point Piper, Sydney.
Chatterton, who was born in Southland in New Zealand in 1887, came to Australia and in 1919 was the department manager of David Jones Ltd in Sydney. 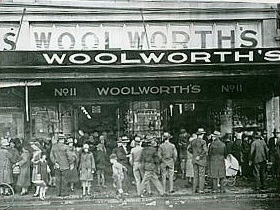 Woolworths was established in Australia on September 22, 1924, with the first store (Woolworths Stupendous Bargain Basement) opening on December 5 that year in the Imperial Arcade on Pitt Street, Sydney. It was to be a place “where good things were cheap”. 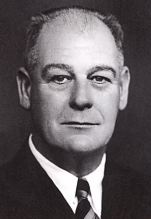 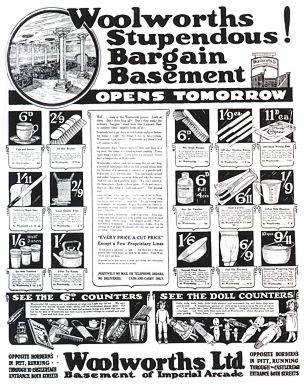 It was Waine’s idea to call the company “Wallworths Bazaar”, but when Williams found that F.W.Woolworth in the US had not registered its trade name in New South Wales, and was apparently not interested in doing so, he adopted Woolworths instead. A second branch opened on Pitt Street in 1928 and in the 1930s Woolworths expanded into a chain store through Victoria, Western Australia and New Zealand.
Chatterton and Christmas had opened a first floor frock salon in Queen Victoria Markets (now the gorgeous Queen Victoria Building) at the corner of George and Market streets in Sydney. They had been selling women's clothes by mail order and expanded to a blouse and hosiery shop and used the slogan “No Shop Rent” to convince customers they could buy at lower prices.
Christmas leased the Imperial Arcade outlet and Creed suggested retailing low cost, portable merchandise, patterned on the operation at Cash & Carry Ltd in Adelaide. 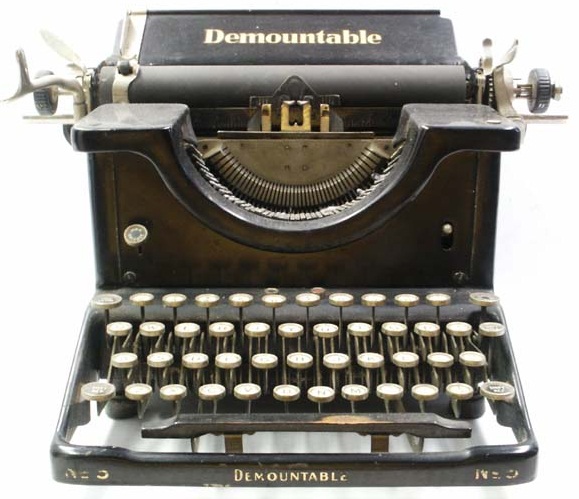 Herman Price Collection, Chestnut Ridge Typewriter Museum
Apart from Chatterton and Bean, the other founding directors of the Demountable Typewriter (Australia) Ltd were M.B.Young and H.A.Bowden. Sadly, the scheme did not get off the ground. Instead, the Demountable’s tools and dies went to Italy.
And that left Remington’s arrangement with Chartres in Australia, under which Remington had a “branch plant” in Sydney during the 1930s. Overseen by Remington representatives, US-made typewriter parts were assembled to produce “Australian-built” Remingtons, which were marketed by Chartres. With the demise of the Demountable idea, this was as close as we did come to having our own typewriter industry. 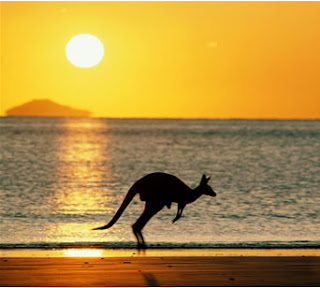 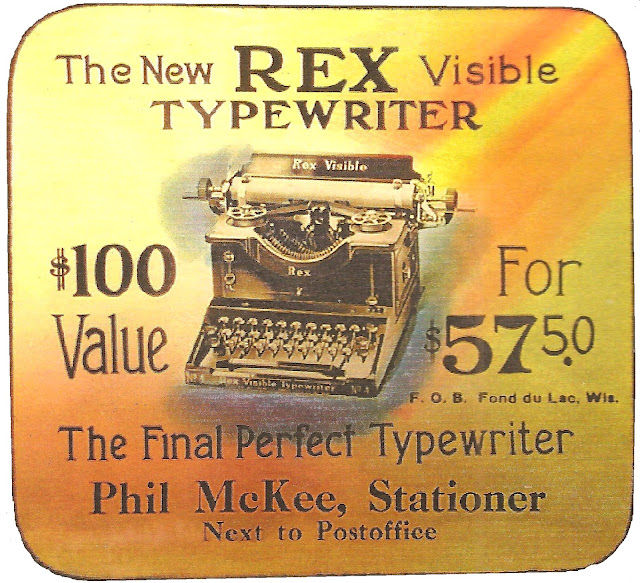 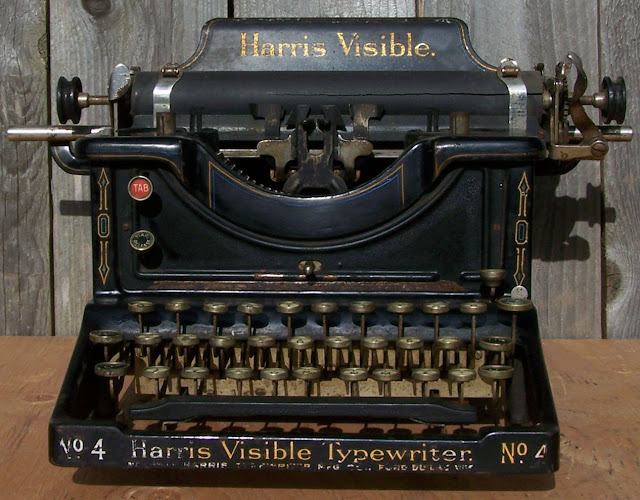 I am not going to go into detail about the Harris, Rex or Demountable typewriters here, because these have been covered extremely well by Will Davis on a number of web pages, and also in the March 2009 edition of ETCetera (No 85).
See Will's extensive work in this area at these links:
Demountable
Harris 4
Harris
Harris 7
R C Allen
Betz

See also the Demountable demounted at Herman Price’s Chestnut Ridge Typewriter Museum here.
But what I will mention briefly is the man who created the Harris-Rex-Demountable – De Witt Clinton Harris, all four of whose patents for the Harris/Rex typewriter were granted on this day (October 27) in 1914.

Harris was born the son a schoolteacher, Milton Thomas Harris, in Leesburg, Texas, in 1876. He was never directly involved in the typewriter industry, but moved around the country, working in different positions. In 1900 he was a salesman in West Town, Chicago, in 1910 he managed a car building company in Germantown, Philadelphia, and in 1920 he was an office designer in East Grand Rapids, Michigan. 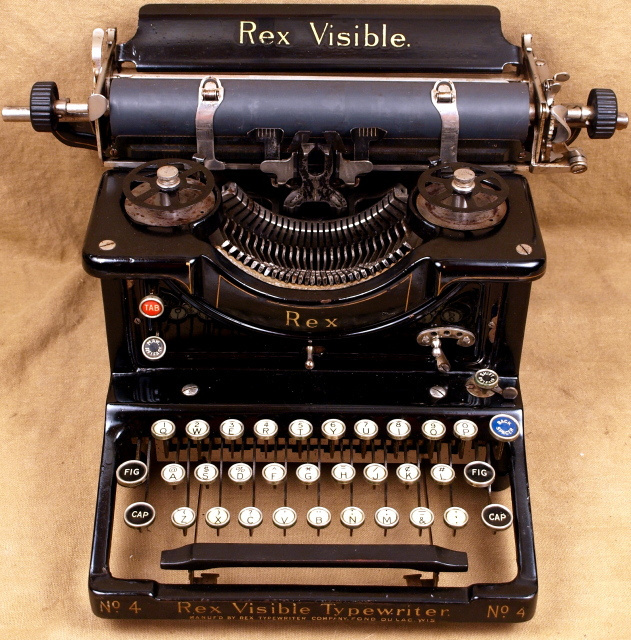 By 1921 he had moved to Florida, to Pineland, and resumed work on typewriters, designing the various components and typing action for the Demountable. 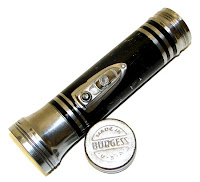 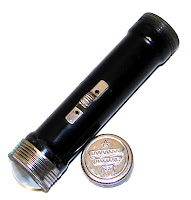 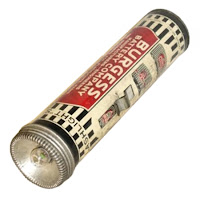 De Witt Clinton Harris also designed these torches
In 1925 Harris designed a flashlight for the Burgess Battery Company of Madison, Wisconsin. He then went farming in Crystal Springs, Florida, in the mid-1930s.
Harris died in June 1941 in Tampa, Florida.  He is buried at Myrtle Hill Memorial Park, Tampa. 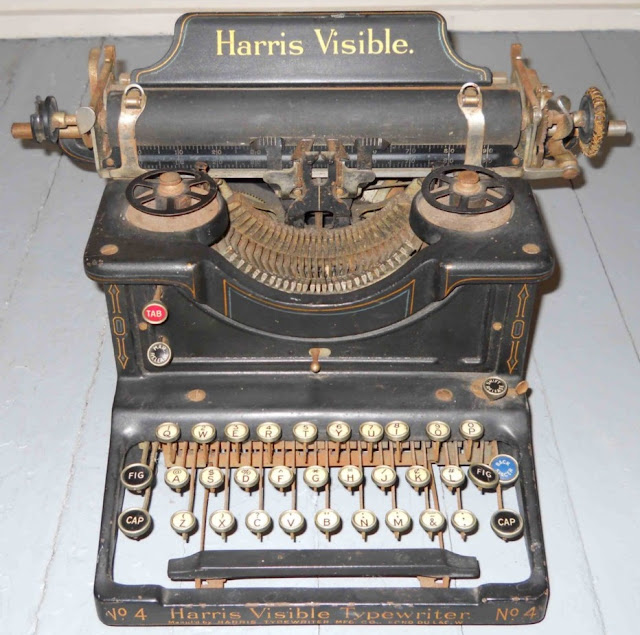 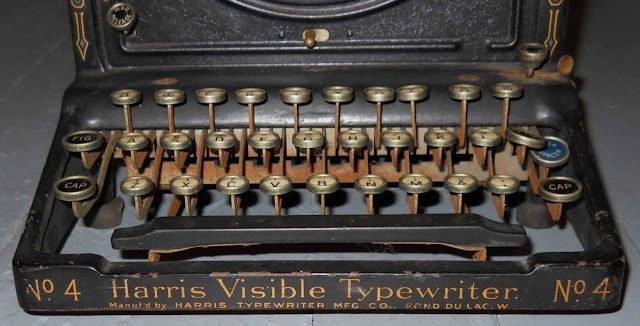 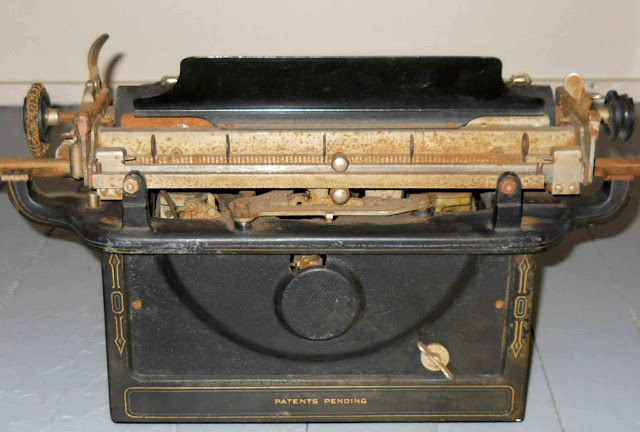 Another one of your wonderful and informative posts! I really enjoy these and today I have learned of another very interesting and nice looking typewriter.

I remember seeing Audiola radios and it is neat to see other brands I was familiar with since childhood in Austrailia, Stromberg-Carlson -- great phone equipment and fine amplifers and Woolworth's. I never really paid attention to Woolworth's being any place but the States.

Finally I had at least one of those Burgess flashlights like in your upper right picture. Those were quite popular in my home town.

Too bad that the scheme didn't work.

I got a Demountable last year and think it's a very fine typewriter, though noisy.

Just picked up a Demountable No 2 (serial #144817)
from 1929. It is a well engineered, and built typewriter, but as Richard says - noisy. The action is quick and snappy.
Since the Davis pages on the Harris/Rex/Demountables are no longer available, might you share more of your knowledge of them some time?
I was surprised that in your post you say that Demountable in the US was still around in 1937. I thought they stopped production in the late 20's - early 30's. The Typewriter Database shows serial numbers only up to 1929, but maybe the company was still around on paper at least!? Thanks as always for your generous knowledge!!

Hi Donald. I'm not sure it's me saying 1937, but the Australian newspaper which reported this in 1937. Paul Lippman ("American Typewriters") says the company went out of business in 1936. The Australian group were after the plant and manufacturing rights. I guess it's possible the plant had stood idle for some time?