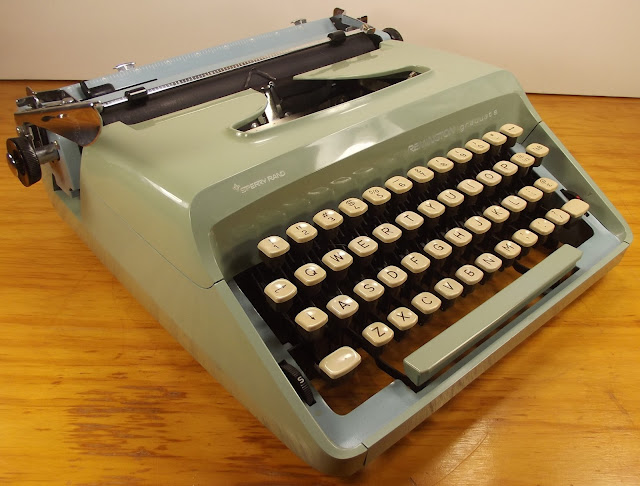 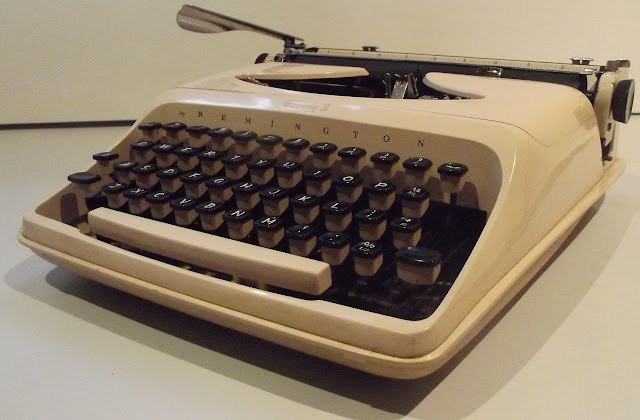 BAD*
*I should perhaps point out here, to avoid confusion, that it appears to me the version of the Ten Forty with which US Typospherians are more familiar is what I call the "good" Ten Forty. In Australia, however, these heavier, more solid machines are quite uncommon.  The Ten Forty in this country would more usually fall into the wide range of lighter plastic typewriters (Envoy II and III series) with a plastic, shell-like, clip-on, crinkle-surface case, as Richard Amery points out in the letter below (Richard's way of distinguishing between the two versions is probably more obvious than mine). Because of the clip-on case, the base plate of the typewriter runs all the way through under the keyboard. The version of the Ten Forty which seems to be more common in the US has a more straight-lined, smooth-surfaced vinyl case. There is no base plate under the typewriter.
*Among the Remington models Thomas Russo identifies in his book Mechanical Typewriters: Their History, Value and Legacy are the Ten Forty and its lookalikes the Quiet-Riter and the Personal-Riter. Then he looks at what I call the "bad" range: the Holiday, Monarch II and Streamliner. He dates these six machines from 1959 to 1970 and says they were made in Holland. More significantly, he says they all have Cycolac bodies. Perhaps there are differing densities of Cycolac, explaining the clear weight differences. 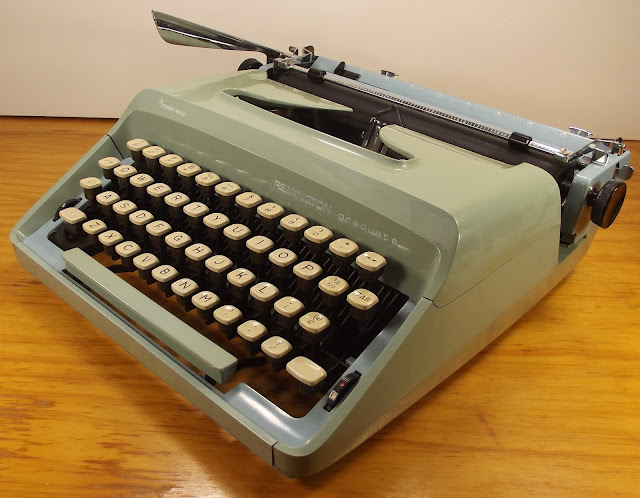 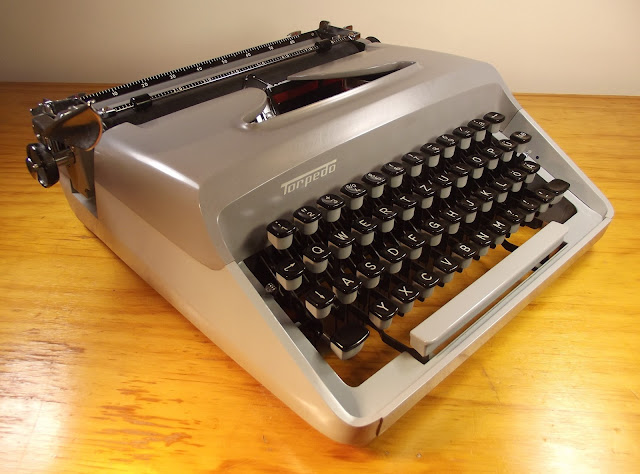 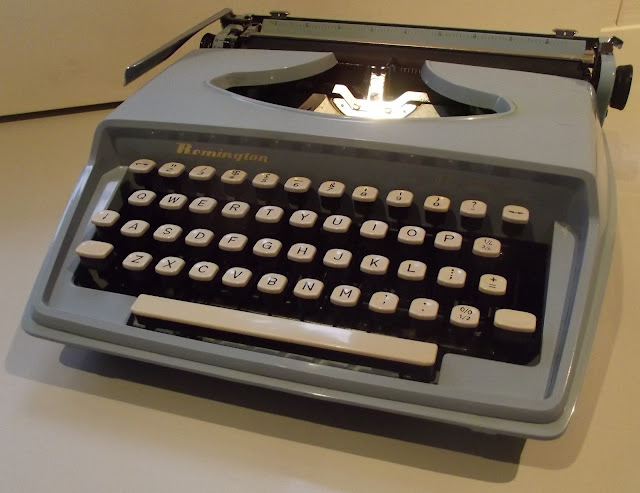 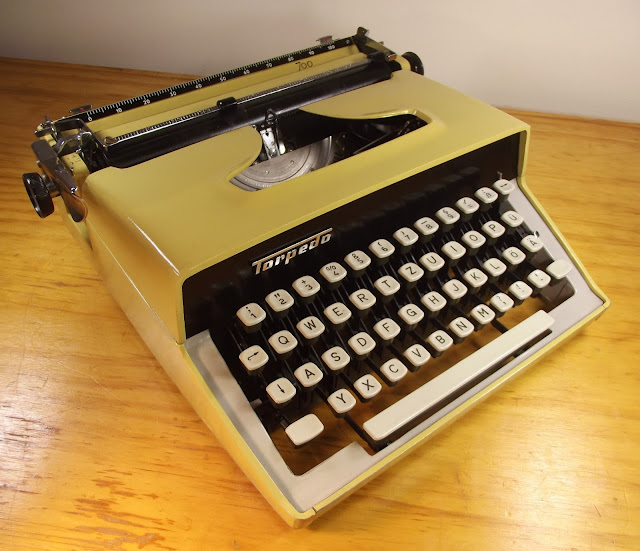 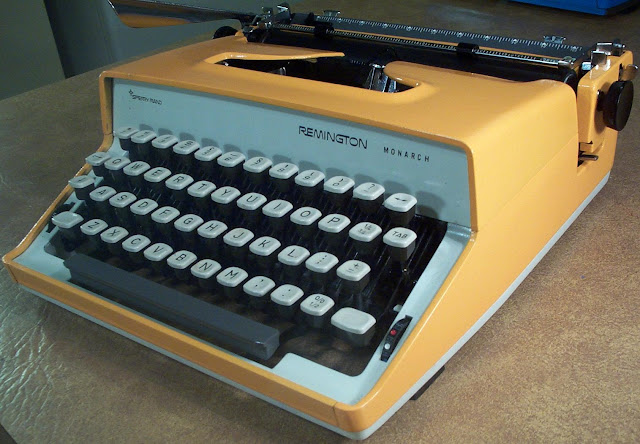 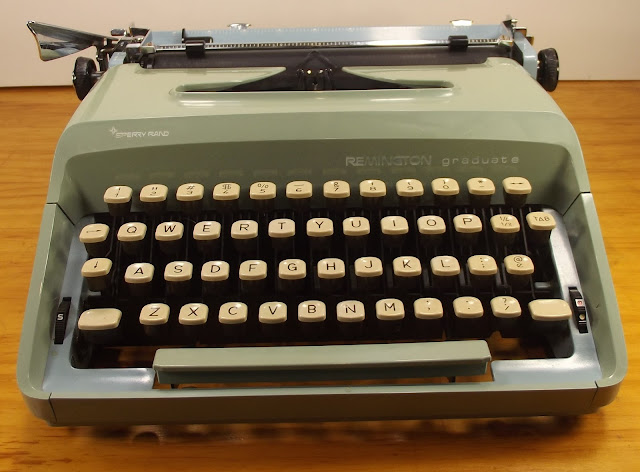 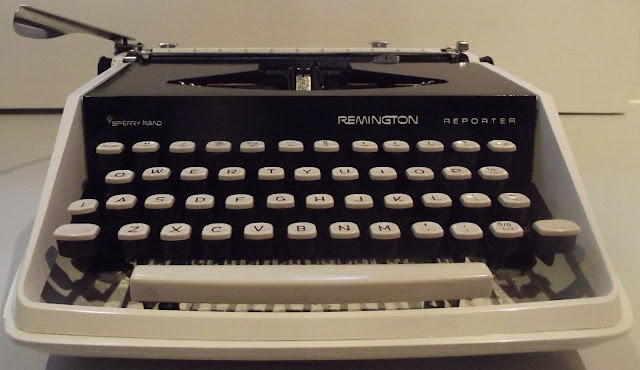 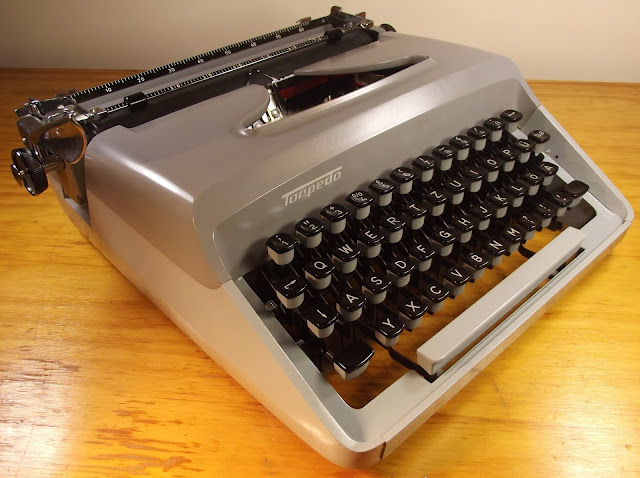 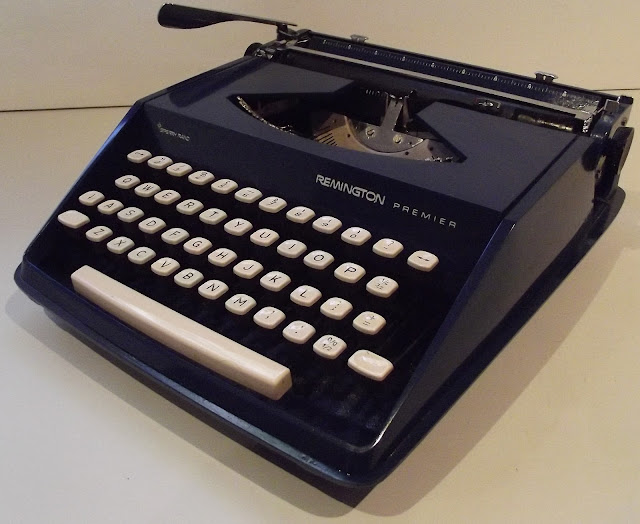 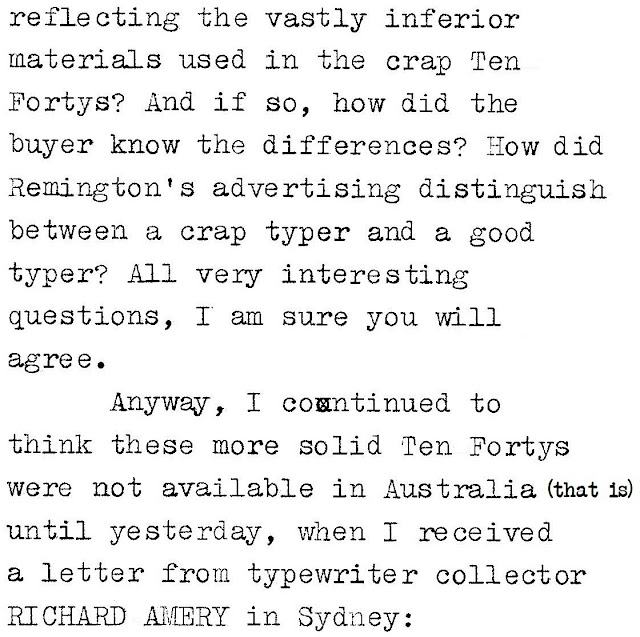 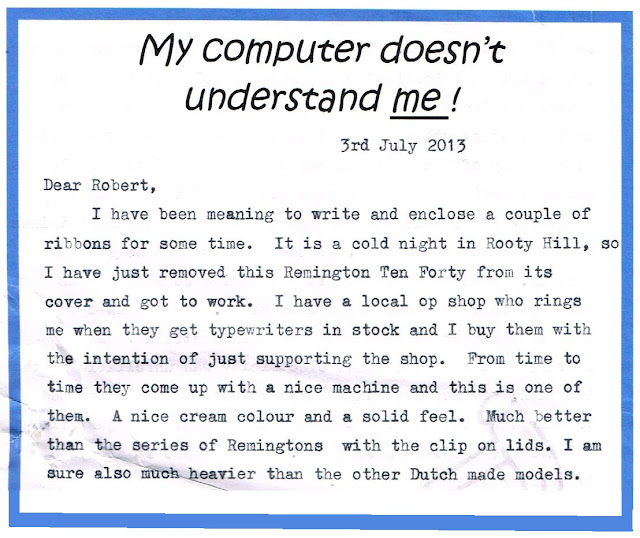 By sheer coincidence, Richard Amery was making the very same discovery in Sydney as I was making in Canberra: that is, that there are good and bad Remington Ten Fortys. 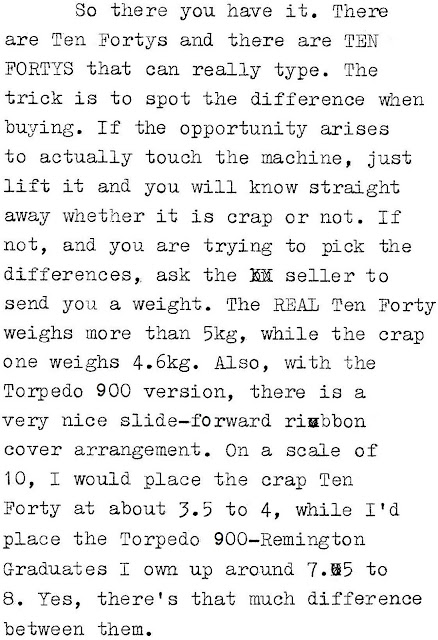 An interesting difference that I'll try to keep in mind. Quality of materials, "fit and finish" (as they say with cars), and quality control at the factory seem to make a huge difference with typewriters. For instance, those Chinese portables could be all right if they had all of the above; instead, factory standards are low and the machines can barely type the letter "a" without smudging and wobbling.

Richard, your have put your finger on it literally by recognizing that awful smudgy A. Now the reasons that this comes about can be attributed to several different faults. Top of the list is that the typebar is not hitting the anvil. The anvil is the raised portion of the segment and the little pip that is on some typebars is the part that hits the anvil. The trick is to have the type-bar to contact the anvil a fraction before the typeface hits the platen. This creates a whipping effect resulting in a sharp impression. Smudging occurs when these conditions are not met. As a test try holding the type-bar up against the platen ,ribbon in the stencil mode, and the try to slide a small piece of typing paper in between the typeface and the platen. If you cannot do this then something is not in order.
Another cause of poor printing is caused by the type-bar glancing off either side of the type guide. This brings us to the point that Rob was making about "good" Remingtons and "bad" Remingtons. If your typing technique is poor and the type-bars are made of inferior metal then the resultant key clashing knocks the type-bar "off-line" making it hit the type guide resulting in poor alignment. Sometimes you can fix this by looking at how the type -bar enters the guide and then you can form it in the opposite direction. But here is the important point, you rarely have to do this to Olympias or Adlers because the bars are made of spring steel. Alf Hutchinson, service manager of McDougals(SCM dealer) said that with the Olympias" you just take them out of the box, dust them down and give them to the salesman, if you try to "improve" them you will just bugger them up!" I will just conclude with a story of me being asked to align a SCM Corsair, I think, a small flat portable, made I am convinced, of tin. A truly abysmal machine. After about an hour of fruitless effort Alf took pity on me and gave the machine to a more experienced mechanic with the words, "Jack has been fixing this sh*t for years".
If you are interested I can expand more on this subject

very interesting - I may have to bookmark this one

I enjoyed the sleuthing here that revealed how a good design could exit the factory as a piece of junk. And as an entry-level Typospherian (although I've been a user since 1957) it was very interesting to learn a bit more about how they work from McTaggart. (I knew there was a reason I love my Olympias!) Every added bit of that knowledge ramps up my respect for the designers just that much more. And, lastly, I had to chuckle to myself as the title of this post brought to mind the family catchphrase from the work of one of our favorite beach book authors, Lisa Gardner, "Good Tessa, or bad Tessa?" Thanks for another great post.

I've got an American Ten Fourty in the collection that I've never liked to type on. Hard typing action and just feels *dead*. I'll have to weigh it today and see if it's over or under 5kg. :D

I was temporarily the owner of a Starfire...one of the worst typewriters I've ever had the displeasure of trying to use. Flimsy and awful. I was off Remingtons for a long time after that.

Hi I'm an owner of a Remington ten forty and its needs a new ribbon. Do you know anywhere in Australia I can get one? Would be much appreciated

I just bought a Remington Holiday...it was one of those machines that I had to see if it was as terrible as I'd heard...I prefer it to my Skyriter. Also, Pica Corsairs are much better than Elite ones

Spotted a Remington Starfire in red for $134 Canadian. I'm still on the fence about it. Though it is in immaculate condition. What do you think?

That's a bit high in my book.