On This Day in Typewriter History: Demmel's Olympia SF 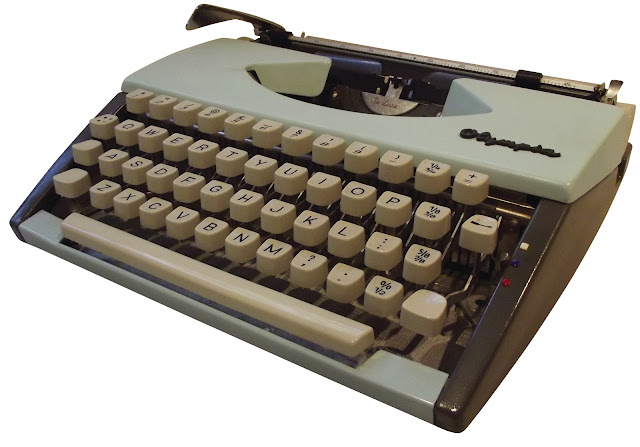 On this day (October 10) in 1961, Anton Demmel was granted a US patent for the design of the Olympia SF small, flat portable typewriter – one of my all-time favourite typewriter designs. 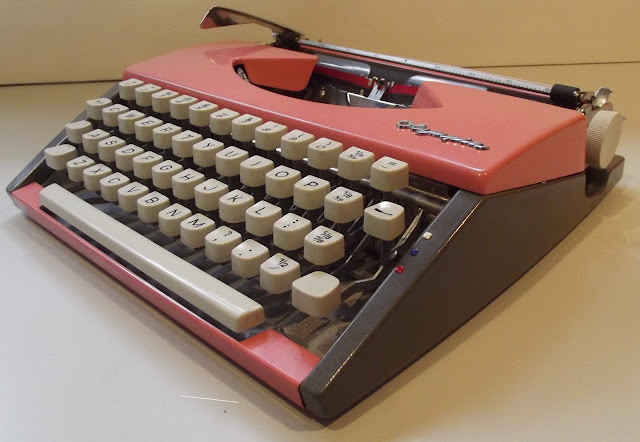 Demmel designed most of Olympia’s 1950s typewriters, from the SG through the SM series down to the SF – and not just the outer casings. 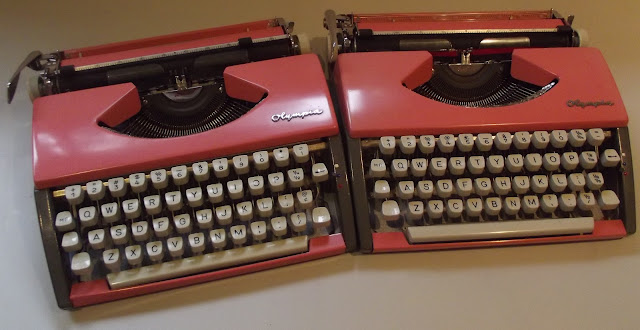 Demmel had worked for Olympia in Erfurt before the war, but was one of the design team which managed to later rejoin Olympia in Wilhelmshaven in what was then West Germany. 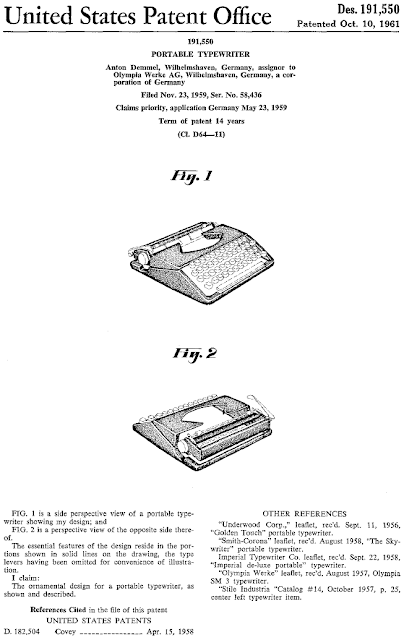 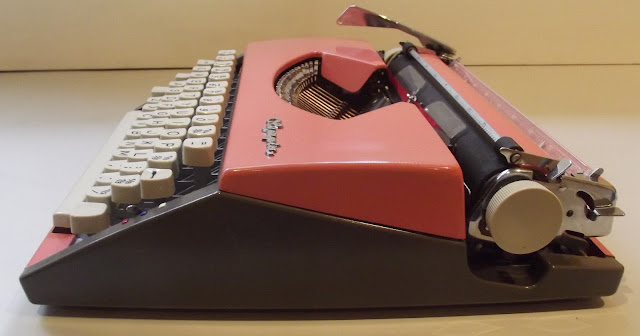 SF, by the way, stands for schreibmaschine flach (flat typewriter). 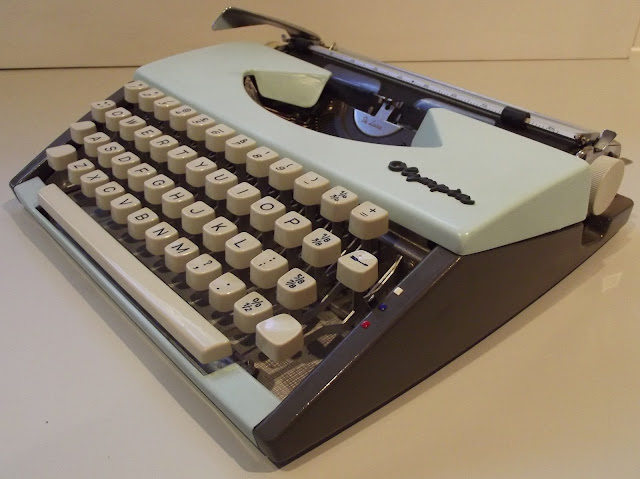 Adwoa Bagalini reviewed this model two years ago and said, accurately, that it "is one of those ultra-portable machines that has received rave reviews from typewriter users".

"The SF is often mentioned in the same breath as the Smith Corona Skyriter and the Hermes Baby/ Rocket, as a typewriter that is both truly portable and pleasant to use." 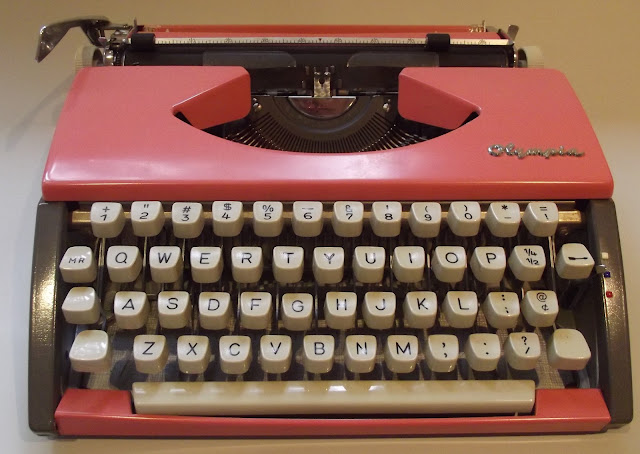 Adwoa pointed out that the SF "appears to be a direct descendant of the earlier small Olympia portables, which were labelled Splendid 33, Splendid 66, and Splendid 99 in Europe, and in the States was seen occasionally branded as the Olympia Socialite." 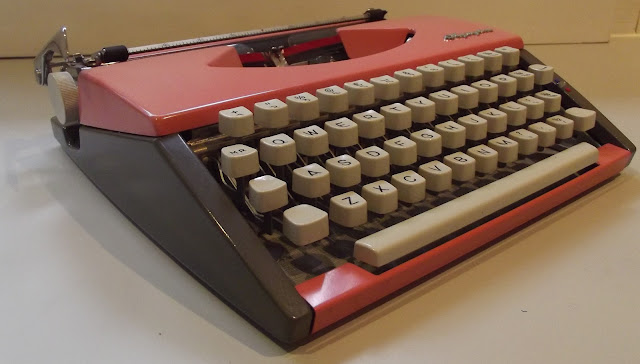 On his Portable Typewriters Reference Site, Will Davis says that in 1957 "Olympia built a factory specifically designed to produce these [small flat] machines, and annual production jumped up considerably and stayed there.  One of the very best of the flat portables ever made." 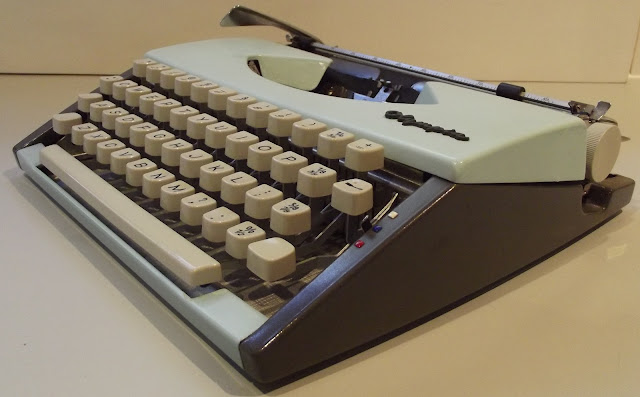 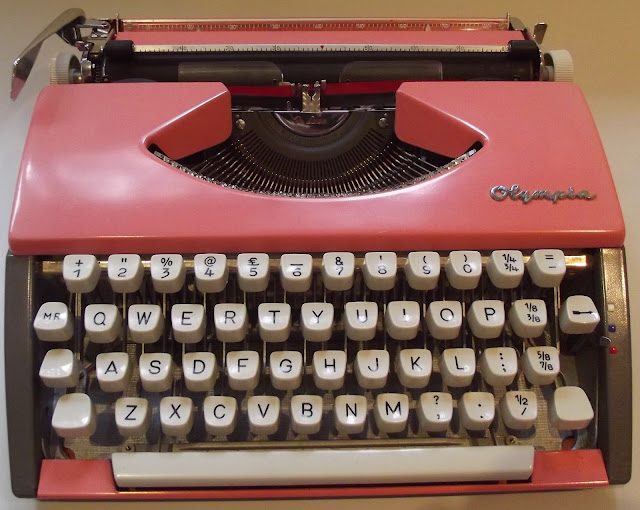 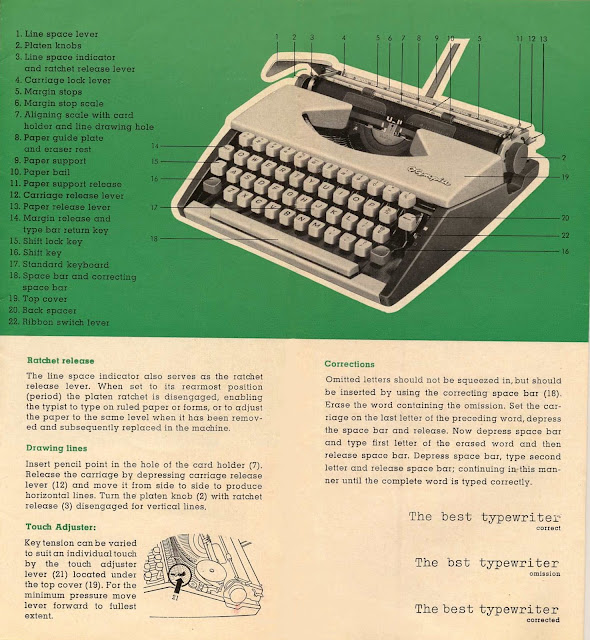 These are great (though I prefer the earlier rounded body). I rank them above the Skyriter and well above the Hermes Baby for feel.

This is one that has still eluded me. Interesting history. I wish I could find this much info about the classic watches.

I need to play with the neglected first generation SFs lurking in kid bedrooms. I remember them as feeling better than the Empire Aristocrat and need to compare with the Gossen Tippa and a recent arrival.

Ah, yes. I'm quite a fan of the little SF. I much prefer it to the Traveller de Luxe (which my ignorance informs me has the same or nearly the same chassis). Although, the carriage return lever on the SF sometimes, I think, could be a little bigger. Other than that they're really fantastic.

I have often wondered about these typewriters. Richard P. answered my question I was going to post regarding these in comparison to the Skyriter. I really like the feel of the Skyriter and the ease of the carriage tilt.

I think I may look for one of these instead of a Baby for my next small portable.

Robert, are yours Pepto pink or salmon? Regaedless, they look fantastic. I have only used one very briefly and in that short time found them very nice. Perhaps I miht find one someday.