On This Day in Typewriter History: Underwood Eases the Family Tension 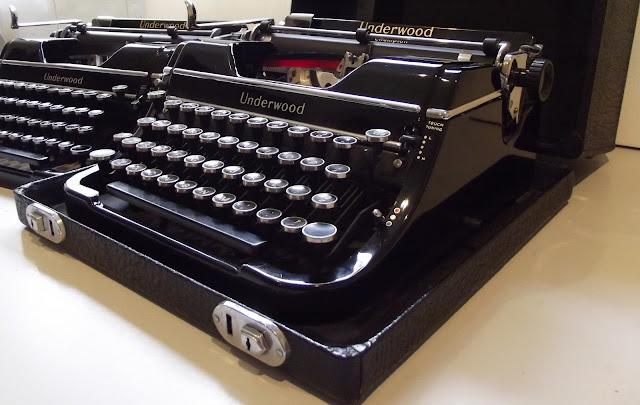 In the previous post in this series, we mentioned Bernard Dowd and Henry Hart coming up with a touch-control mechanism on the Royal KMM. Two years before Dowd and Hart's work on the KMM, veteran Underwood engineer William Albert Dobson had developed a similar device for the Underwood portable. 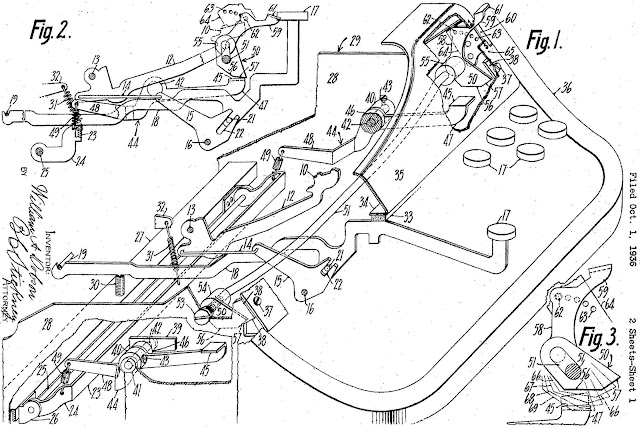 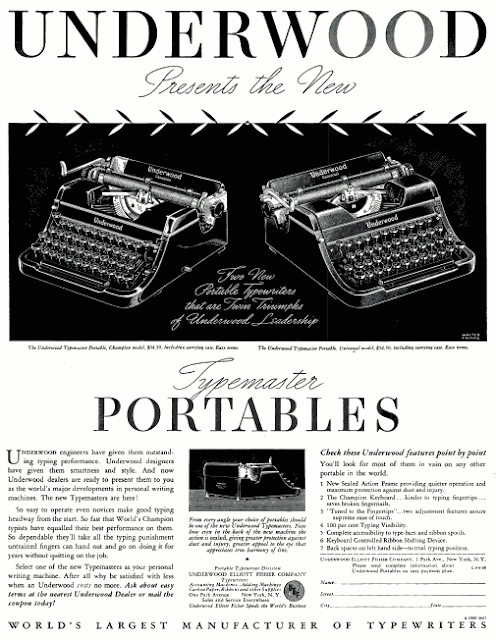 In his specifications, Dobson explained, "The impact force of the type against the worksheet varies in accordance with the speed of operation. For adapting the mechanism to different individual touches, a key-tensioning device is employed.

"It is a feature of the invention to render the touch-control accessible, particularly as incorporated in Underwood Portable machines, for the reason that the small machine is largely used in the home by different members of a family. A touch-control lever, at the front of the machine, is adjacent the keyboard and is readily accessible for manipulation. Further, the control-lever is operable vertically so that upward and downward movements thereof readily become associated in the mind of the typist with a lifting or lightening of the tension and an increase of the tension, respectively. 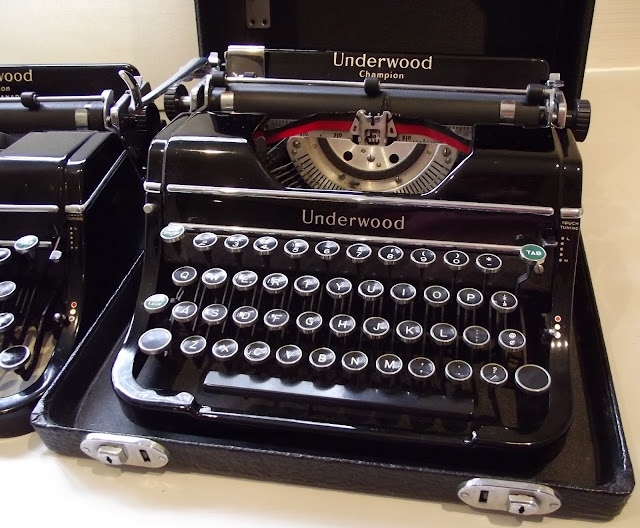 "Manipulation of the touch-control member therefore is rendered more easy because the control is in plain sight and the necessity of searching at the sides or back of the machine for the control-lever is obviated." (Bear in the Royal KMM touch-control dial was on the right side of the machine).
William Albert Dobson was born in Connecticut in November 1871 and started working in Hartford as a toolmaker, then as an automobile engineer. He went to work for Underwood as a toolmaker after World War I and rose through the ranks to become Underwood's factory superintendent in the late 1920s. In his later days he remained with the company as a typewriter engineer. 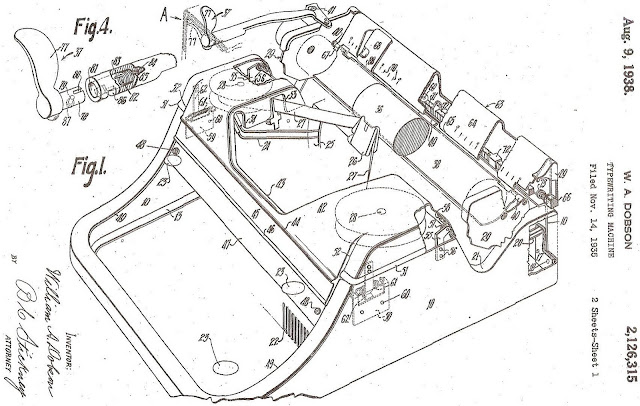 He took a lead role while working alongside with Alfred Gustav Franz Kurowski, Louis Andrew Nemcovsky and other Underwood designers on a number of improvements to the Underwood 4 portable, developing first the streamlined Universal and then the Champion. 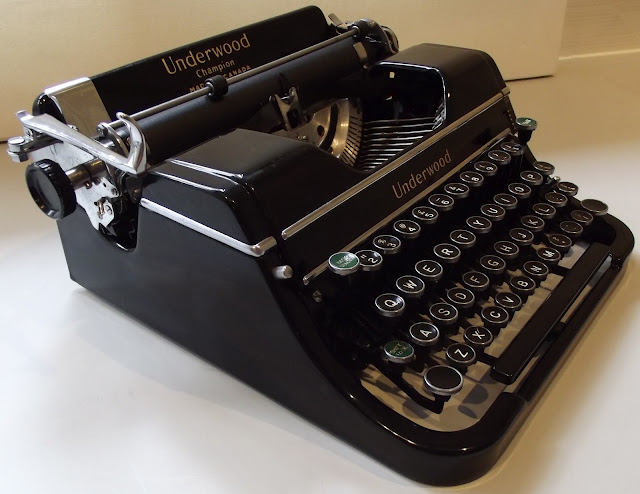 In 1938 Dobson created a whole new look for the Underwood portable.
These late 30s models were also called Universals and Champions, but the revamped design, outwardly and mechanically, succeeded in giving Underwood its first completely fresh look in 12 years. 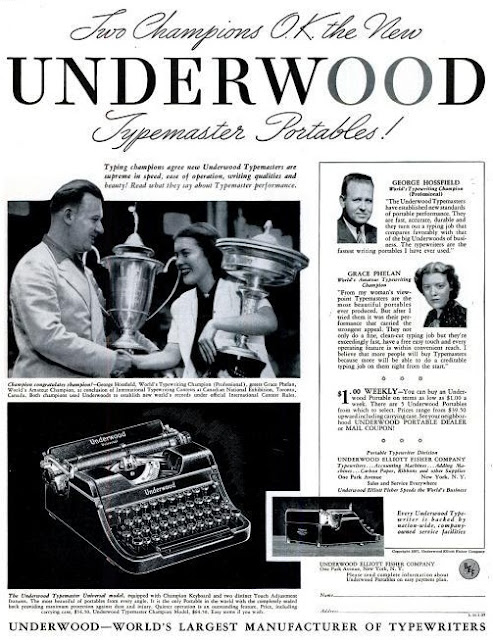 In 1949, another model was added to this line, the Leader, which was a much more basic version of the Universal-Champion. 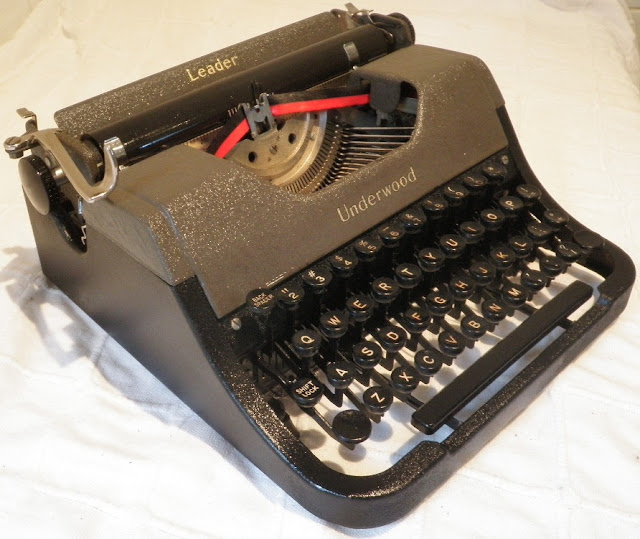 Posted by Robert Messenger at 23:38

That is a nice invention Dobson made - Even though I have to admit that I hardly notice any changes when I use touch settings.

Great research, Robert! I myself have found a vast range of variance in the many makes and models with touch controls - some completely useless, and some very worthwhile.

I know not why, but there's a real soft spot in my heart for Underwoods. There's just something about the way they look, as machines as well as their typefaces. I would love to have more of them!

Do you understand the term "Champion"? It was applied to both portables and standards, but I couldn't define it precisely.

Underwood portables are beautiful machines. Doubly-so for the older, glossy ones. I have a Champion and a Leader, and they are fantastic machines to use. A great feel, and they type so nicely.

I have a question. I have a Royaluxe 450 typewriter and the bell mechanism has a missing part.
The part that is moving the bit that actually hits the bell.
I have no idea how the missing part looks like so that I can manufacture one from some flat piece of sheet metal.
I have looked up on the internet, but I could not find anything. I am trying to do it intuitively,
but I can't figure out how that thing actually works (when it comes to returning the carriage.
Then I thouhgt maybe I can find one of the few professionals out there, maybe someone can help me with an idea. Thank you.