The Blick-Bar and the British Empire 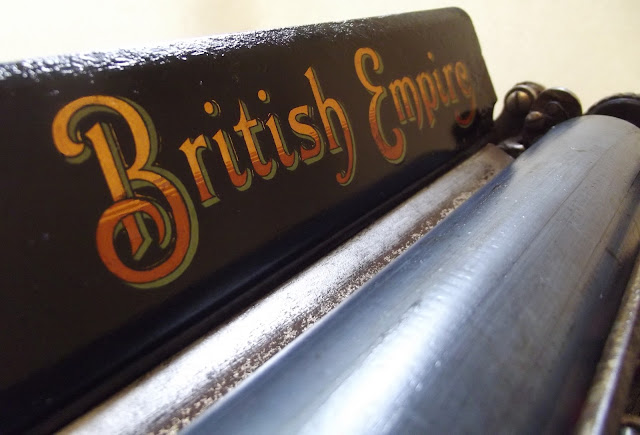 Only last week I was writing about the Blick-Bar (in relation to the Blick Ninety), not imagining for one moment while doing so that I would ever own one, let alone own one within just 10 days.
Today it turned up on my doorstep. Well, not exactly a Blick-Bar, but its very close British sibling, the British Empire No 12. They're not quite twins, but they do share the same parents. 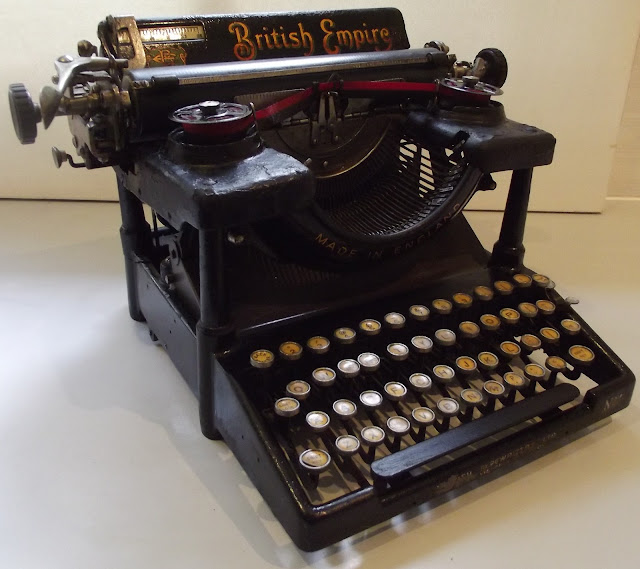 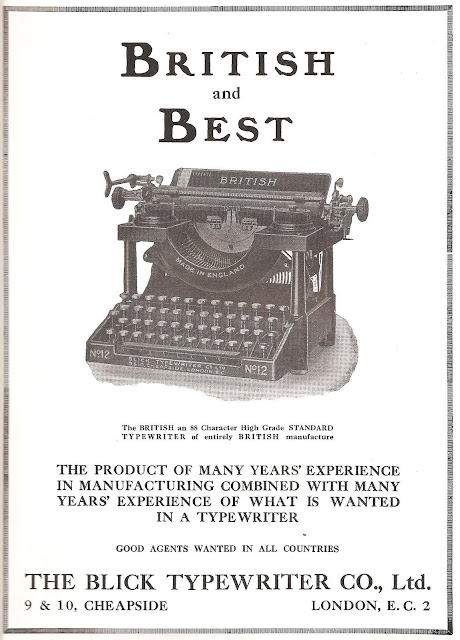 My British Empire is not, as can be quite clearly seen from these images, in the best of health. It has had a rough life. It is most obviously showing the signs of something very, very heavy having fallen on it, cracking the top plate in a number of places and seriously bending down the whole carriage section.
Anyone who spotted this British Empire for sale on Australian eBay might recognise the name, but not the typewriter. A few hours spent cleaning it up and restoring it to something like its former glory this afternoon has proved well worth the effort. It is far from perfect, and I wouldn't dare suggest I could ever get it working. But it's looking a lot better than it did a day ago, and it's now destined for display purposes only. 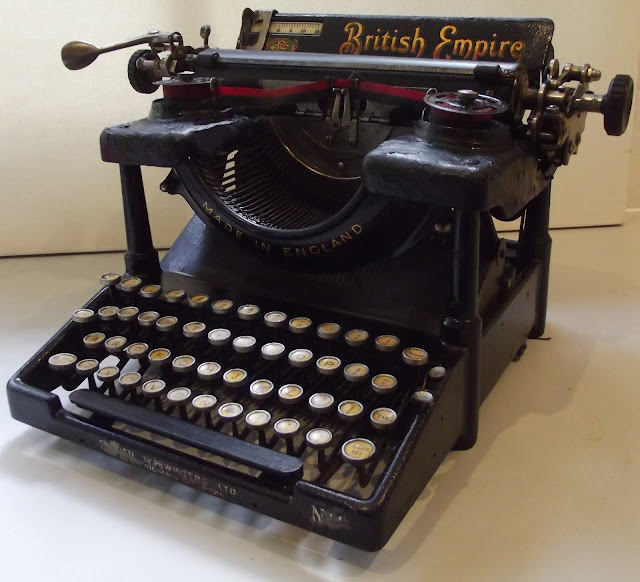 This British Empire deserves a break on a shelf. I shudder to think where it has been these past many years. It cannot tell me its own incredible history, of course, but its mere existence reveals a typewriter story that will more than suffice. It is in itself typewriter history. 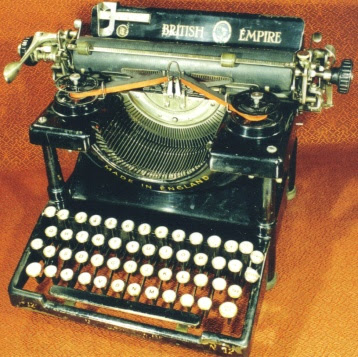 Thomas Fuertig Collection
I had for many years been aware of an image of a British Empire, from the magnificent Thomas Fuertig Collection, on the European Typewriter Project web pages put together by Will Davis and the late Tilman Elster. I don't know the serial number on Thomas's machine, but judging by the decal, and the serial number on mine of 2562, I'd guess mine is an earlier model. Another decal variation is on a British Empire that I suspect noted collector Nick Fisher may have acquired in England not so long ago: 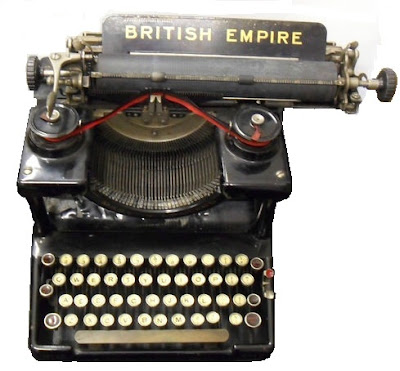 Not once, however, did it dawn on me that this machine was an off-shoot of the Blick-Bar.
It was only been I unpacked what was left of my British Empire today that I realised that it is recognisably related to the Blick-Bar.

Those who read the Blick Ninety post may recall that when George Canfield Blickensderfer died suddenly, in 1917, the Blickensderfer Manufacturing Company was left in chaos. Under new president Stephen Simonson Mapes and George Blickensderfer’s brother, William Jacob Blickensderfer, the company made what industry insiders described in 1923 as a costly decision - to sell the US rights to the Blick-Bar to Harry Annell Smith, who went on to produce it under his own name and other guises (such as the L.C.Smith No 2). 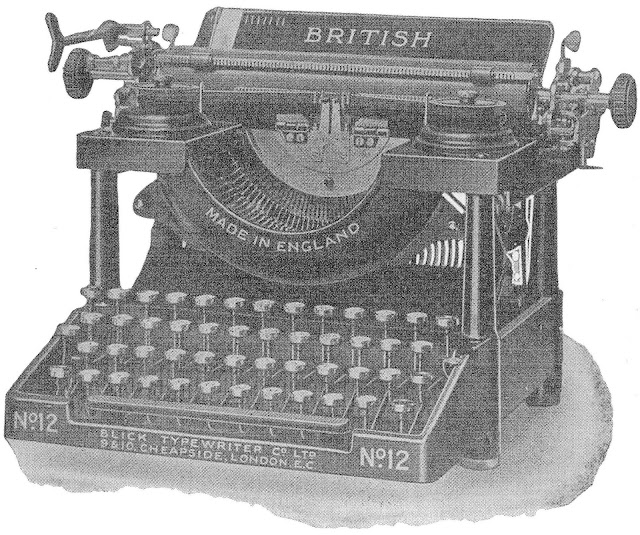 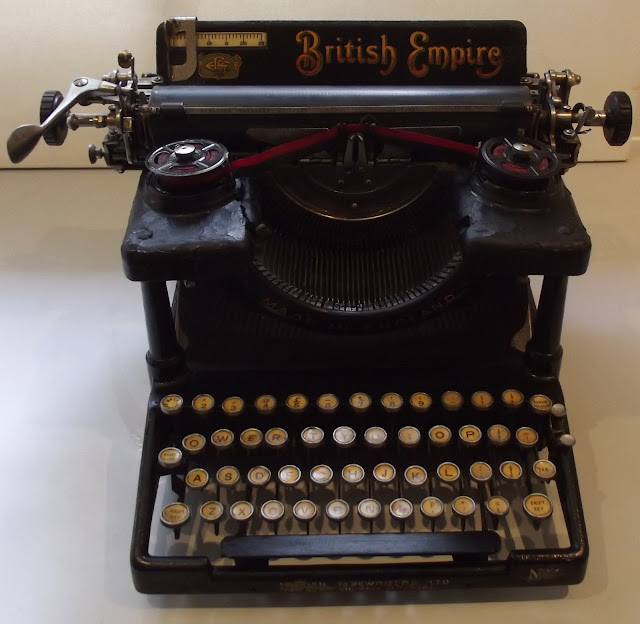 In Britain, however, the Blick Typewriter Company of  9 & 10 Cheapside, London, pressed forward in the best of British traditions – that is, it carried on regardless.
The British Blick company, which had been importing the Blick-Bar from Stamford, Connecticut, simply turned the Blick-Bar into the British No 12, which emerged in April 1923. But instead of this model being made in the US and imported into Britain, it was made under new British patents in Britain – in West Bromwich, to be precise. The changes were mostly cosmetic: taking away the bar linking to two towers on an extended top plate, adding a measure to the paper plate, widening the carriage and having the space bar inserted over the front lip. The carriage lever was altered, too, but the typewriter's basic body design remained the same.

Logo on the British Empire
Take note of the number 12 on the British and British Empire, because it offers clear clues as to the pedigree of these two almost-identical machines.
The Rimingtons, John M. Rimington (born 1841) and his son George G. Rimington (born 1873), had taken over Blickensderfer’s two British outlets, at Cheapside in London and in Newcastle-on-Tyne, in 1904.

In 1922 George Rimington also took over two rival British typewriter companies, one an importer and distributor (as was Rimington’s Blick company), the other, much more significantly, a typewriter manufacturer. 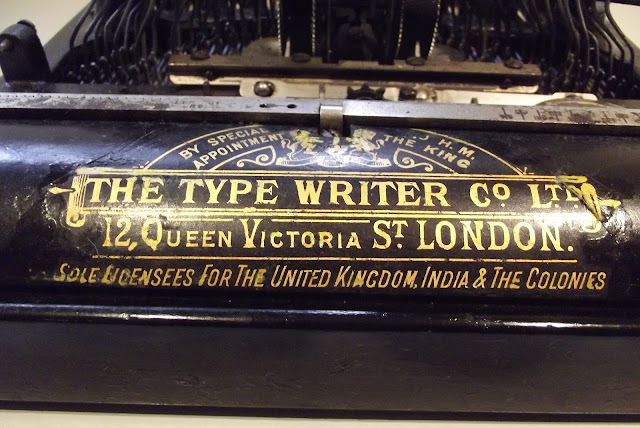 Back on my Royal Bar-Lock
The first was The Typewriter Company, which had been set up by W.J.Richardson in the mid-1890s to import Bar-Lock typewriters (marketed under British Royal patronage as the Royal Bar-Lock) and other typewriter products. 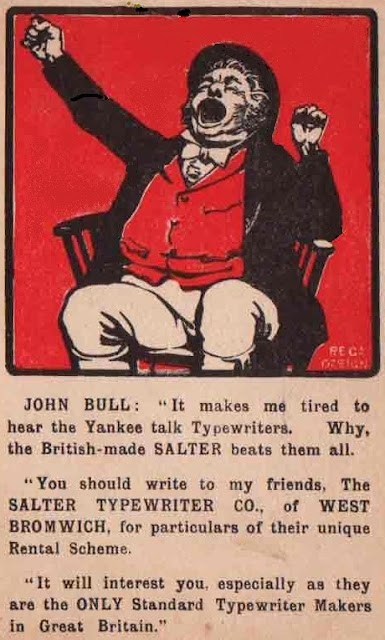 The typewriter manufacturer was George Salter & Co in West Bromwich, outside Birmingham, a company which had been making its own typewriters since 1896. The joint organisation was called the British Typewriters Company (Typewriters plural) and was headquartered at 77 Queen Victoria Street, London, EC4, with the factory on Queen Street, West Bromwich. 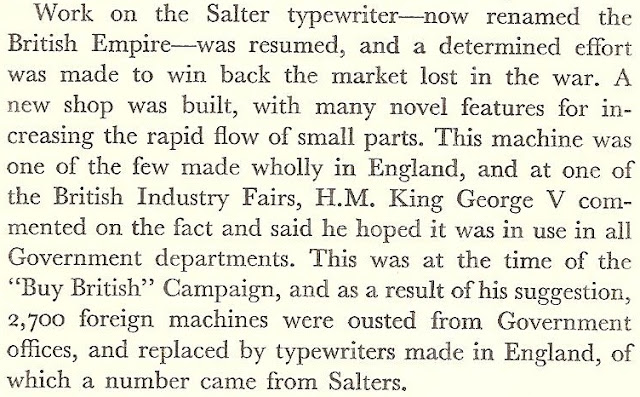 From the Salter company history
Despite heavy support from the British Royal family, the British Empire had no more lasting success than the British or the Blick-Bar. The future of what had become in 1929 the British Typewriter Company (Typewriter singular) lay in portables, and in the licence to reproduce in West Bromwich the Hermes Featherweight/Baby as the Empire Baby/Aristocrat. The name Empire comes from the Rimingtons' British Empire, not the earlier Wellington Kidder Parker-designed thrust action typewriter, The Empire.

British Empire advertising, such as this 1927 Australian newspaper ad
(The Age, Melbourne), and those in Singapore's Straits Times from 1925-1929, emphasised the Royal backing
In 1935 Norman Wetherall Mawle, a businessman from Sutton Coldfield in the English Midlands, attended a machine exhibition in Switzerland, saw the Featherweight and immediately bought the British rights to it from E.Paillard of Yverdon. Mawle returned home to take over the British Typewriter Company so he could make the Baby, and at this point the Salter association with the British Typewriter Company ended. Mawle maintained the West Bromwich typewriter plant, but it was no longer a Salter concern. Mawle’s organisation was taken over by Smith-Corona-Marchant in 1960, with SCM's British manufacturing remaining in West Bromwich. 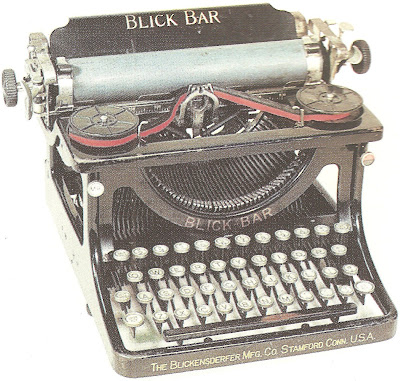 The genesis of the Blick-Bar dates back to  1904, when Lyman Resolved Roberts was working with Charles Wellington Walker in developing the Yöst Visible typewriter under the umbrella of the Union Writing Machine Company. Meanwhile, in 1905, Emmit Girdell Latta designed the Moyer for Harvey Allen Moyer, and the rights to this were bought by  George Blickensderfer in 1912. 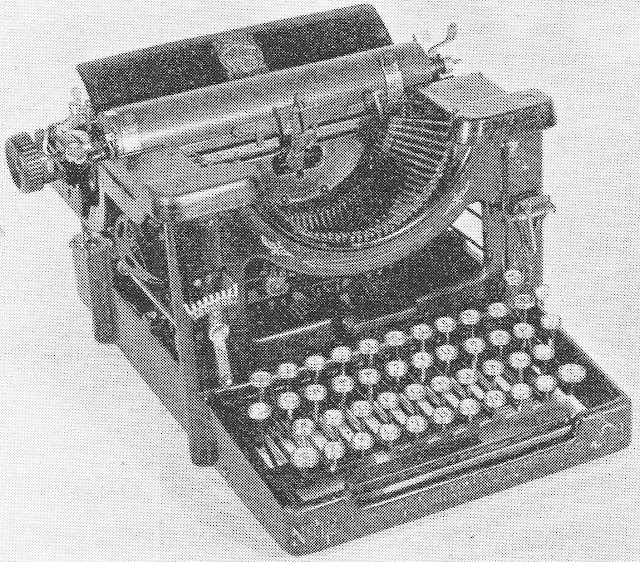 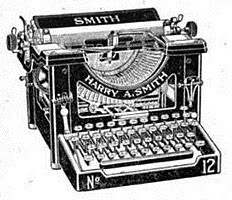 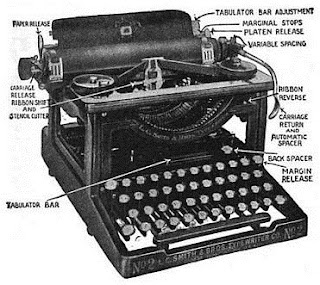 The Harry Smith L.C.Smith No 2
is almost identical to the Blick-Bar
After Blickensderfer’s death, the rights were passed on to Harry Annell Smith.
The Yöst Visible, Emmit Latta’s Moyer design and Harry A.Smith’s machines (including L.C.Smith models) have different ribbon arrangements, with the ribbon spools behind the carriage or under and in front of it. The Blick-Bar, British and British Empire have the ribbon spools placed conventionally on top of the machine. Yet there are very distinct likenesses in the basic structure of all these the models.  Should I also mention the German Cardinal? And No 12 keeps cropping up, too. Coincidence? Roberts, Latta, Blickensderfer, Harry Smith. I wonder. 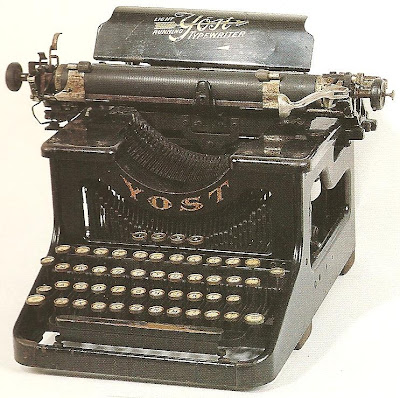 A beautiful typewriter...and what a coincidence!
I have only ever really seen ads for these, and they do not do justice to the machine itself. I mean...the decals! Fantastic!

What a gorgeous paper table on that machine. And I had no idea it was related to the Blick-Bar.