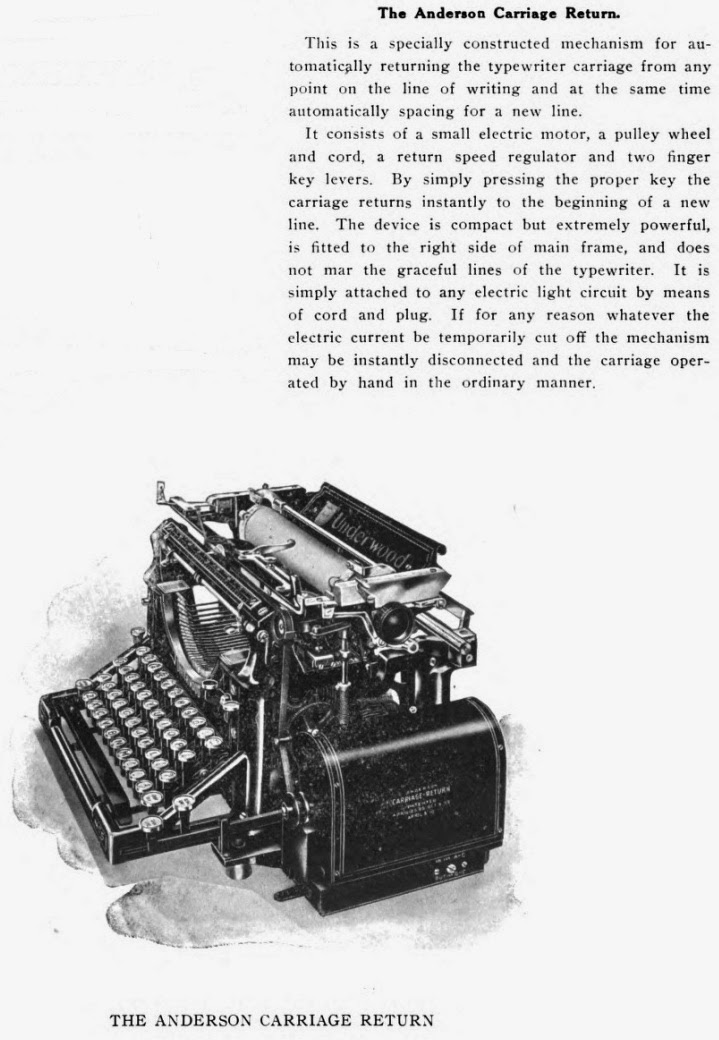 The automatic carriage return was invented by Neal Larkin Anderson, a Presbyterian minister and doctor of divinity of Salem-Winston, North Carolina, who was issued with a series of six unassigned patents on the device over 20 years between 1897-1917. 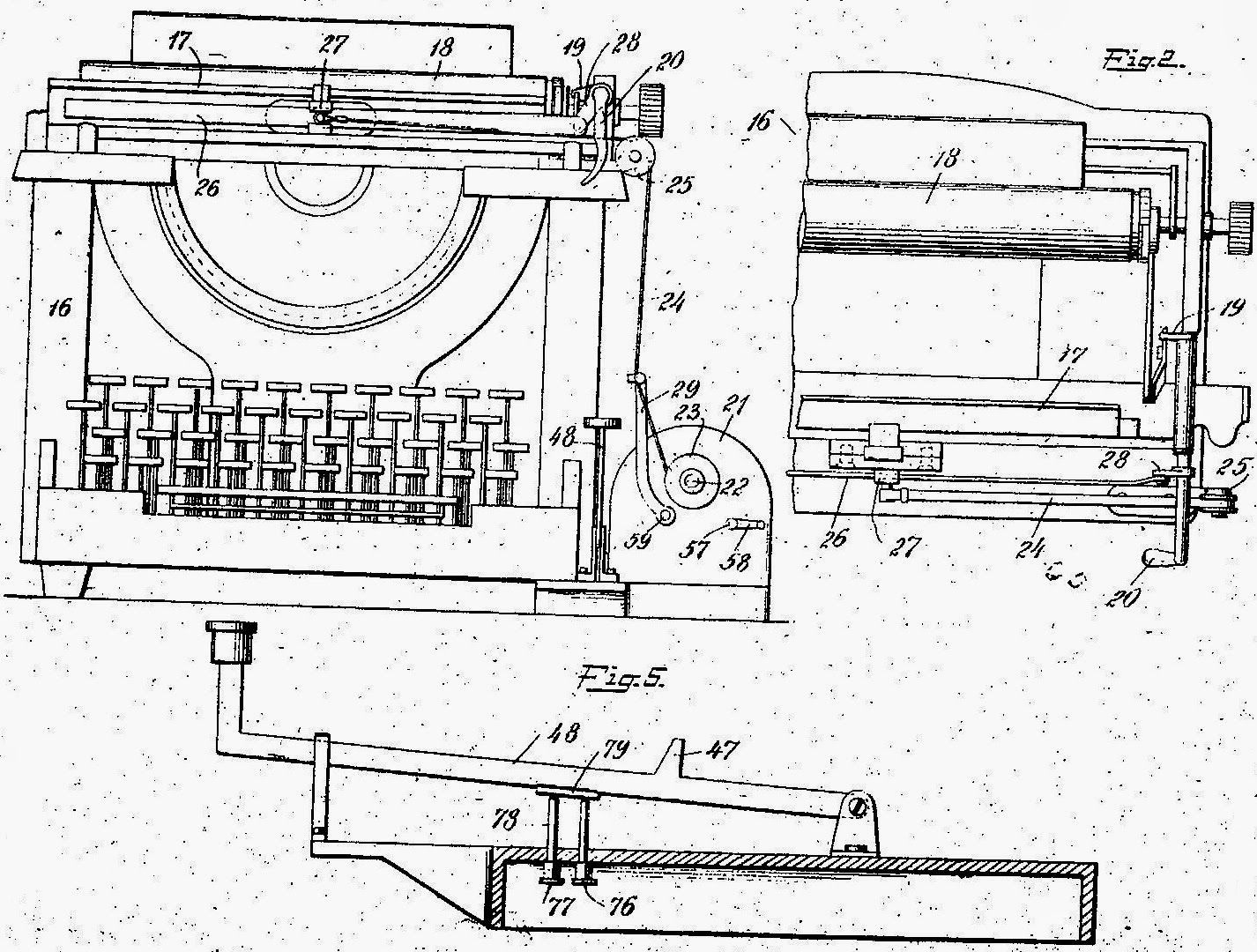 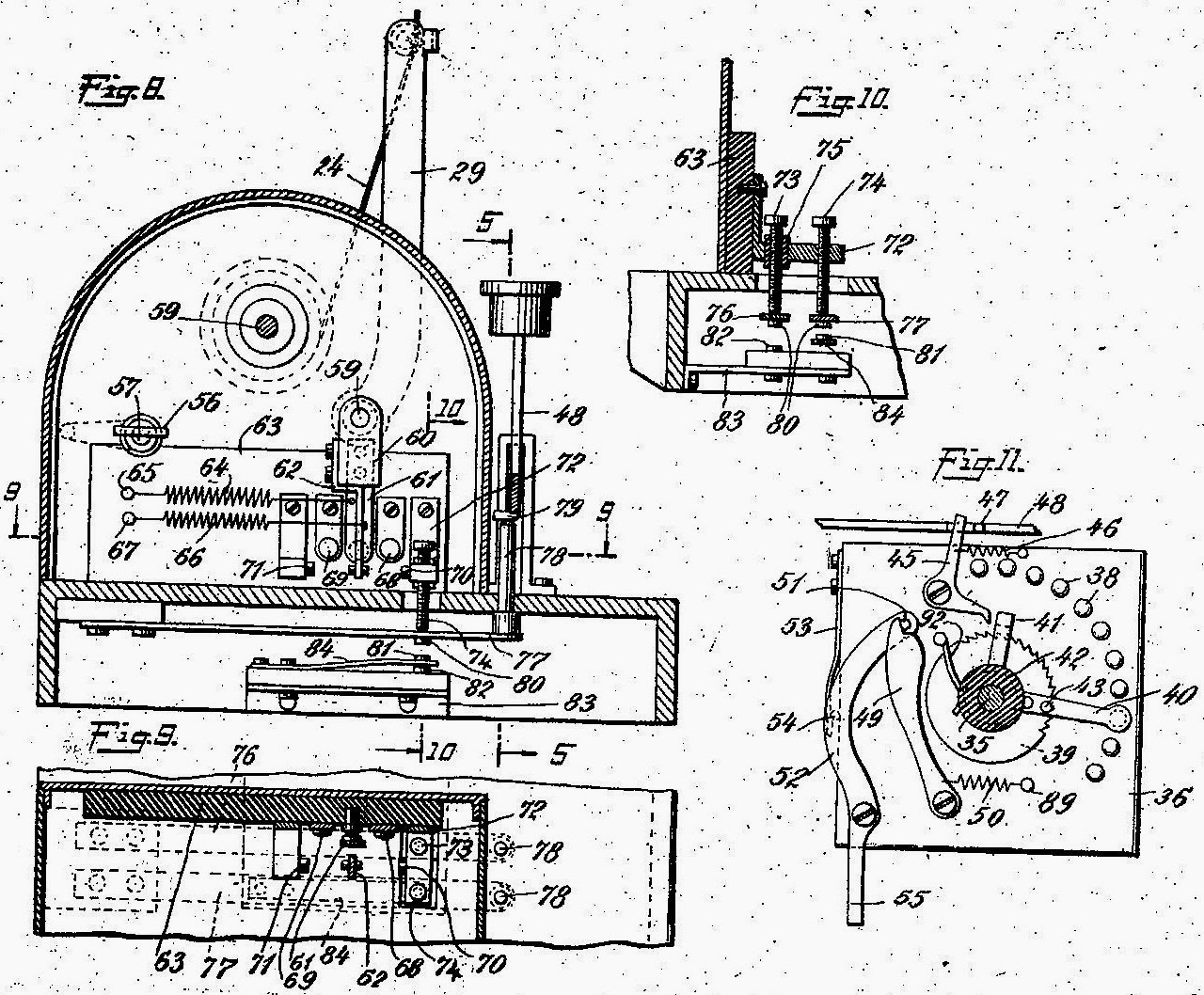 In another invention, one he did assign to Underwood in 1906, Anderson patented the Underwood standard's distinctive ribbon threader. Anderson had been attempting to invent his own typewriter (notably with automatic line-spacing and paragraphing) between 1896-1908, but it does not appear that any of his 10 patented designs ever went into production.
Anderson was also the author of three books, the first two of which stemmed from his sermons - The Race Problem in the South: Fallacies and the Duty of the Church (1907), Fundamentals: What Every Young Person Should Know About the Scriptures, Salvation, The Church (1923) and With Wings: A Bird's Eye View of Western Europe (1928).
I cannot find a photograph of Anderson, but he attended many Underwood company gatherings and I do know he is somewhere in this group (is he fourth from left, at back, with a dog collar on?): 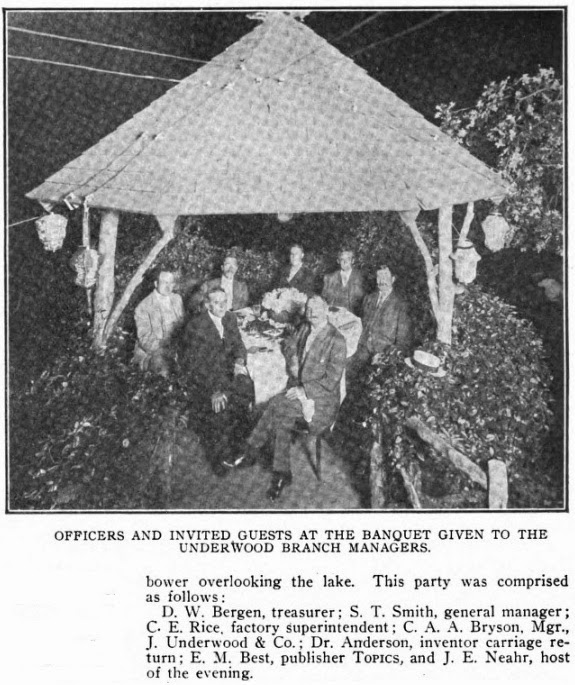 Anderson was born at Yorkville, South Carolina, on July 15, 1865, and died, aged 65, in Montgomery, Alabama, on May 19, 1931. He also lived in Savannah, Georgia, for many years.
Anderson was educated at Bingham School, North Carolina, from 1881, and was principal of the Clinton High School, North Carolina, from 1885-87. He then became a student at the Princeton Theological Seminary and from 1890 was a minister in Clinton.
Family records tell us "Boo" Anderson was a keen "golfer, musician and an inventor". On days off from his church work, he joined a factory assembly line, saying he wanted to stay in touch with the lives of his congregation.

Well, I never even heard of such a concept, much less have I seen the device! Seems like a good idea, though. The Underwood carriage isn't the easiest to return and it would get the typist's left arm tired over a day's work.

Amazing contraption. I wonder if it really worked.

Thank you Richard and Bill for your comments.
Bill, I think if Underwood attached to its typewriter and advertised it (as seen in engraving) it surely must have worked?

Automatic carriage return or not, I love photographs of the Underwood No. 5, and its brethren. It represents the peak, to me, of a certain style which expressed pride in the mechanics by fully exposing them, generally gleaming in nickel plating.

Never seen one on an Underwood, but it looks very similar to what I've seen on an old Mercedes electric that showed on the local auction site here.

Dr. Neal Larkin Anderson, or "Boo", was my great-grandfather. His daughter Ruth is my grandmother and my father is named for him. I can assure you he gained much fame for the carriage return but would have preferred to be known for his ministry. I actually think he was, based on his circle of friends and the responses to his books and articles.

I have a wonderful photo of "Boo" in his Ministerial robes which I would be happy to share. You can contact me at kobearden@gmail.com to discuss this further. His legacy is meaningful to our family even after all these years. It is nice to see him recognized for what was, at the time, a revolutionary improvement to a valuable piece of office equipment!