Be a Beautiful Hit: Neil Sedaka, Remington Typewriters & Me 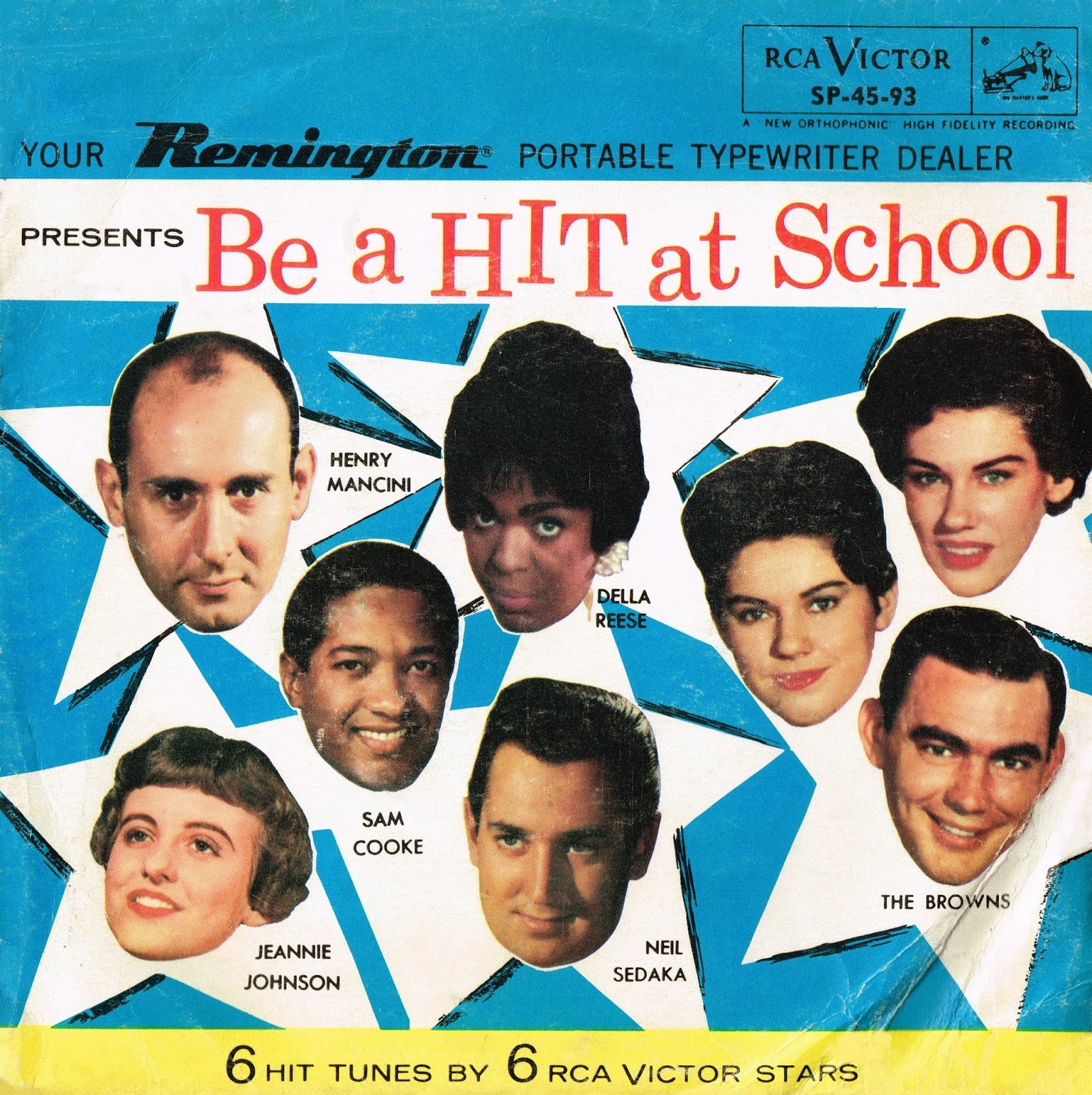 The Christmas 1959 Remington-RCA Victor EP (45rpm extended play vinyl "Orthophonic" record) which was at the centre of a cross promotion to mark the launch of the new Carl Sundberg-designed Remington typewriter series, including the Monarch portable, Remington 11 semi-portable and the International standard-size machine. 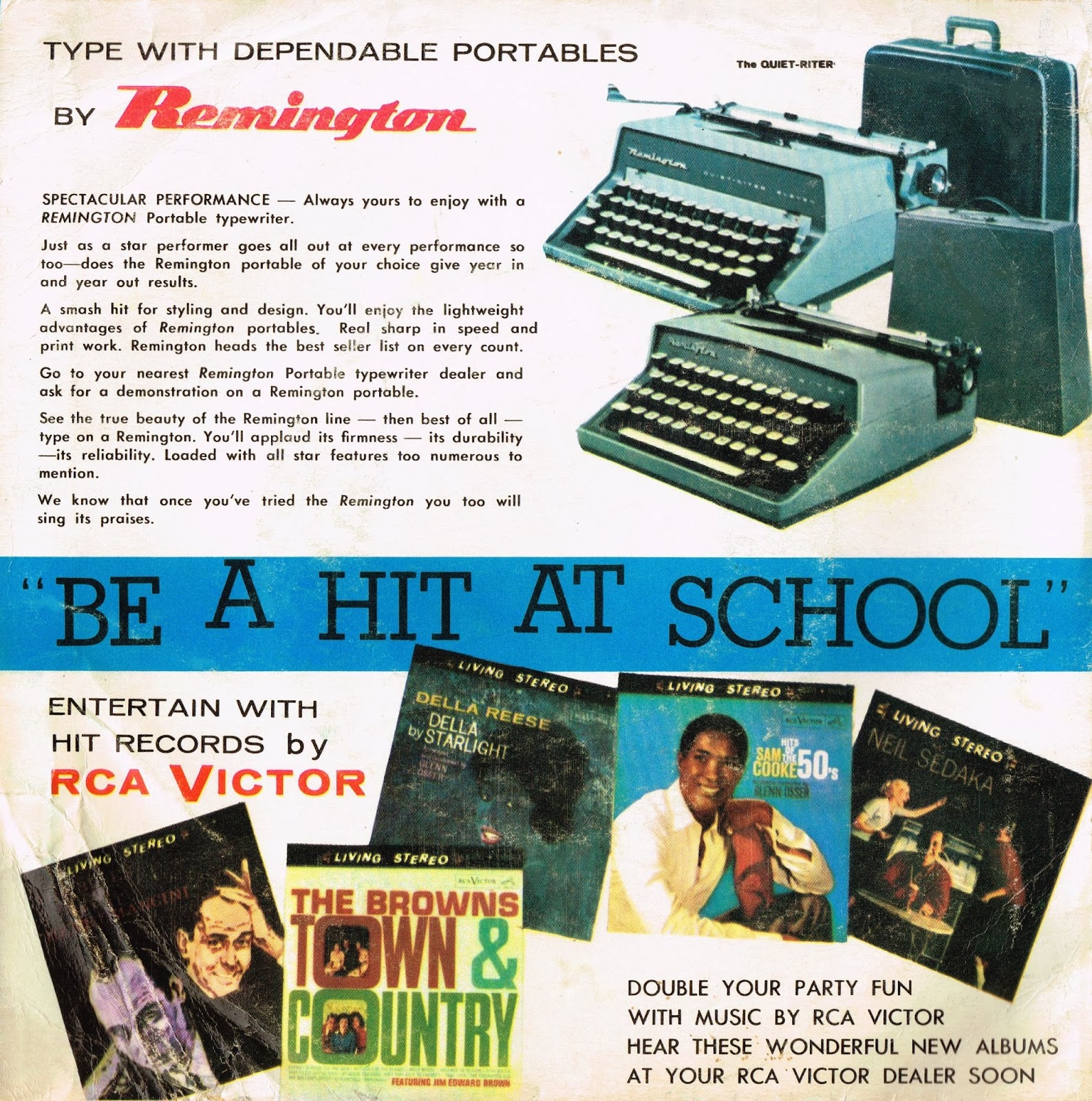 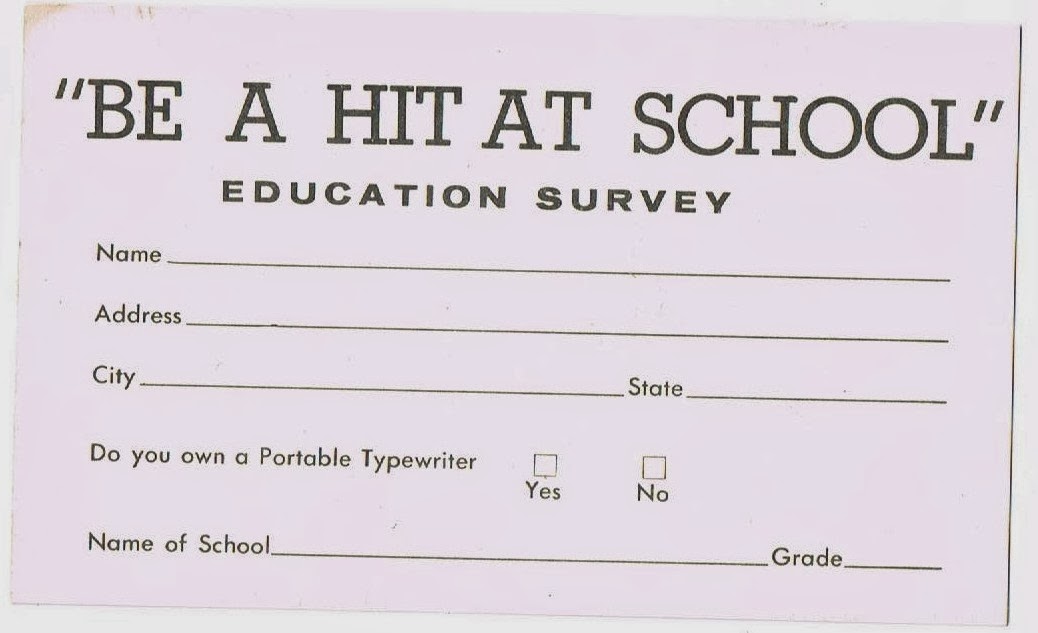 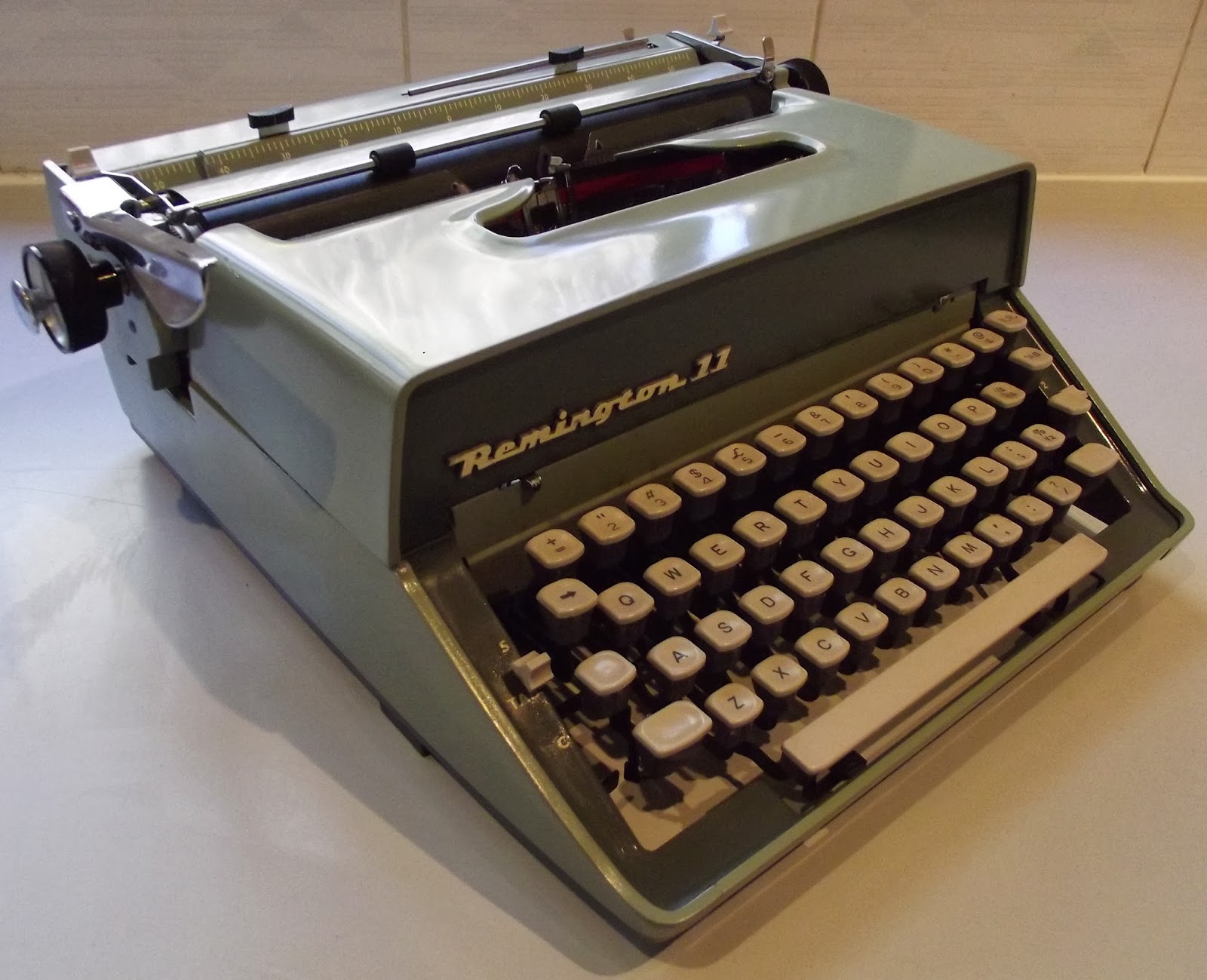 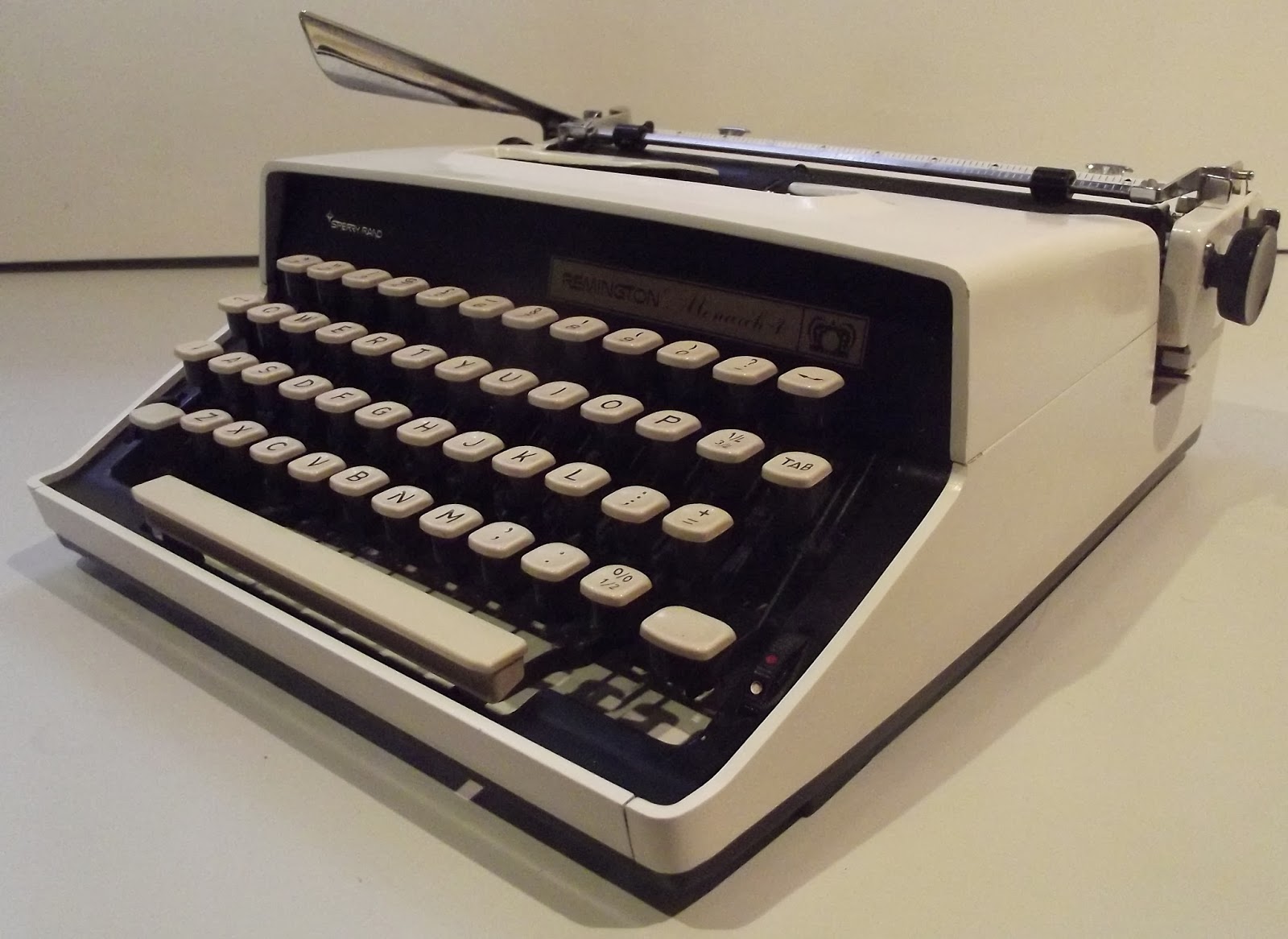 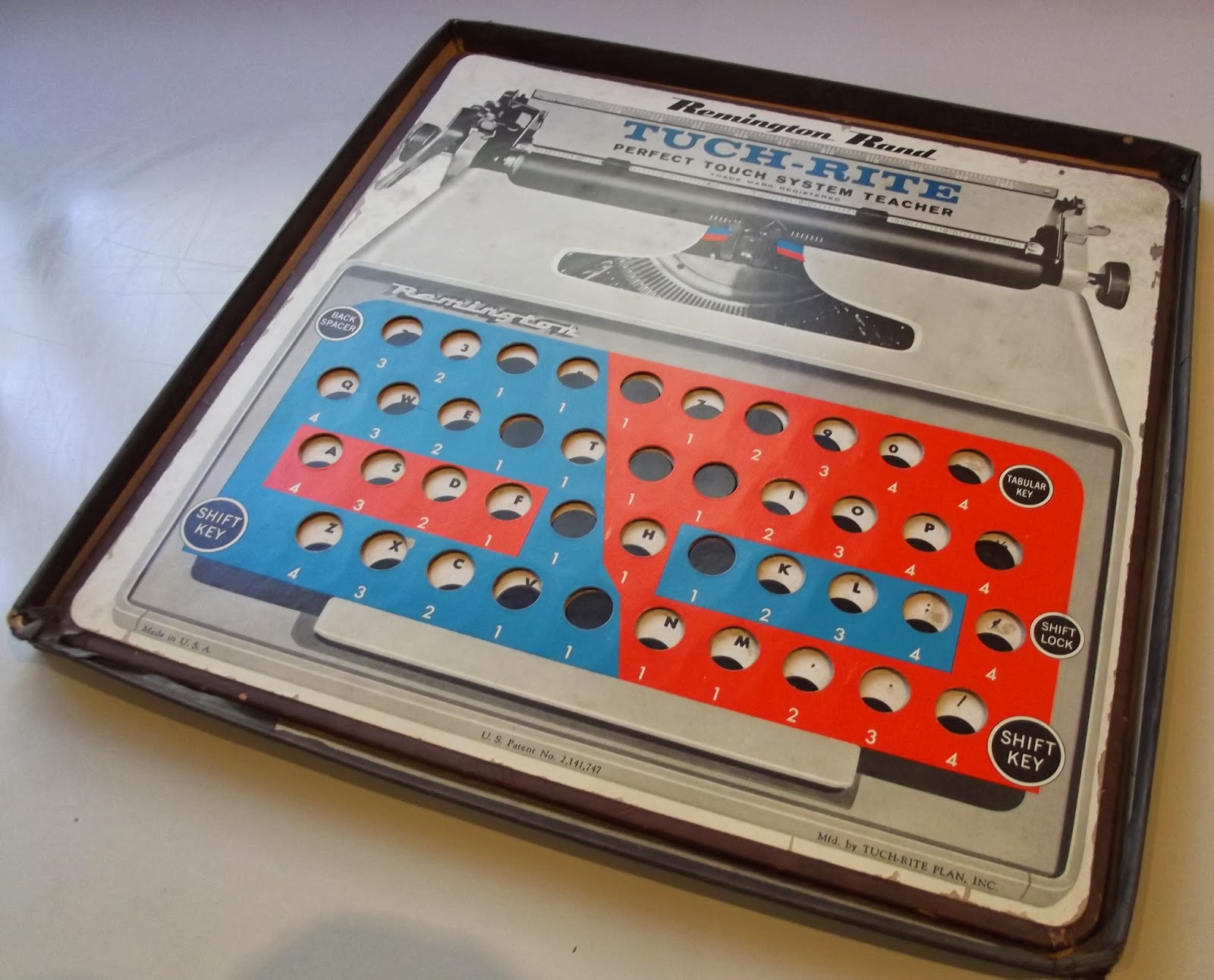 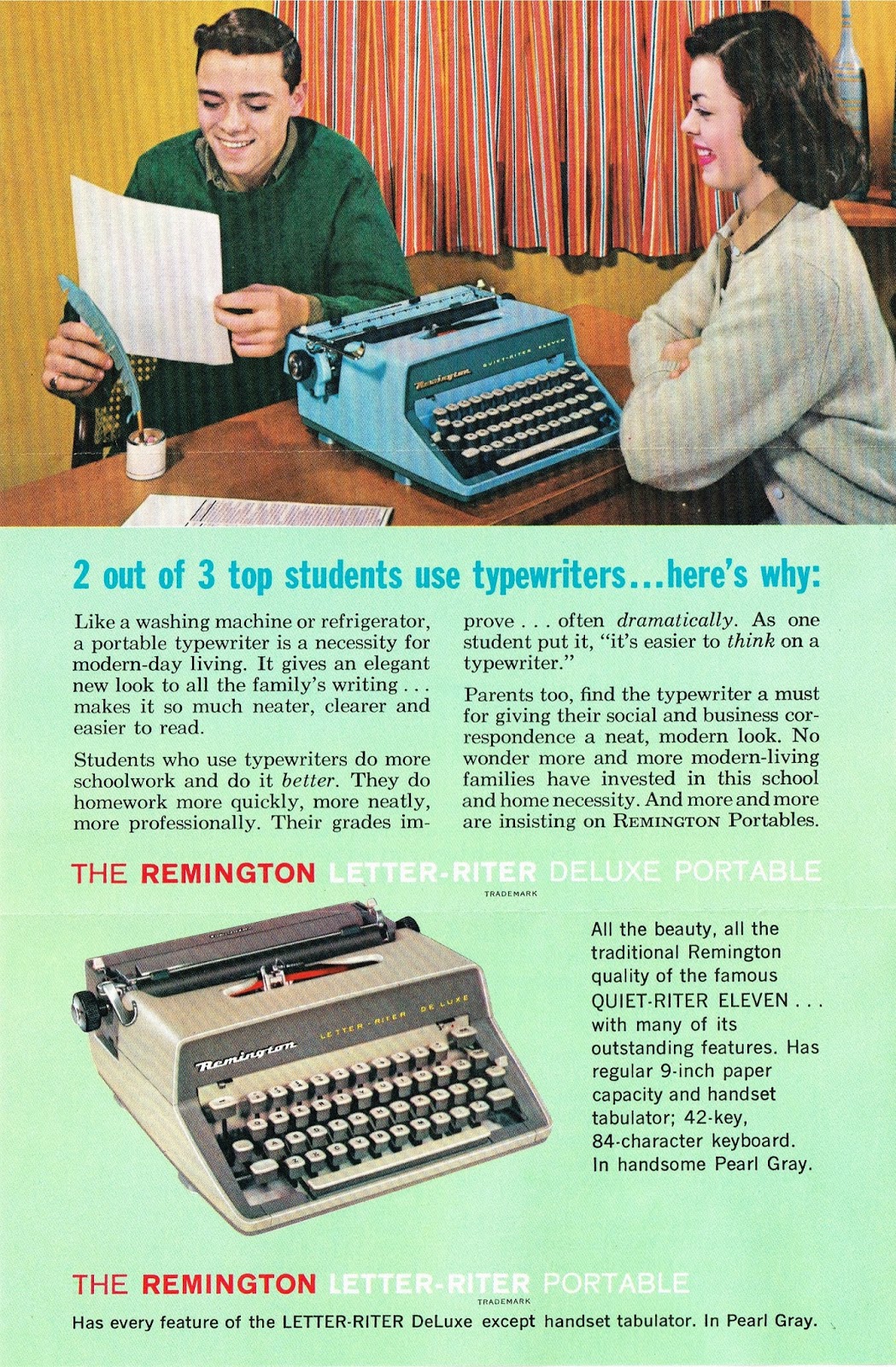 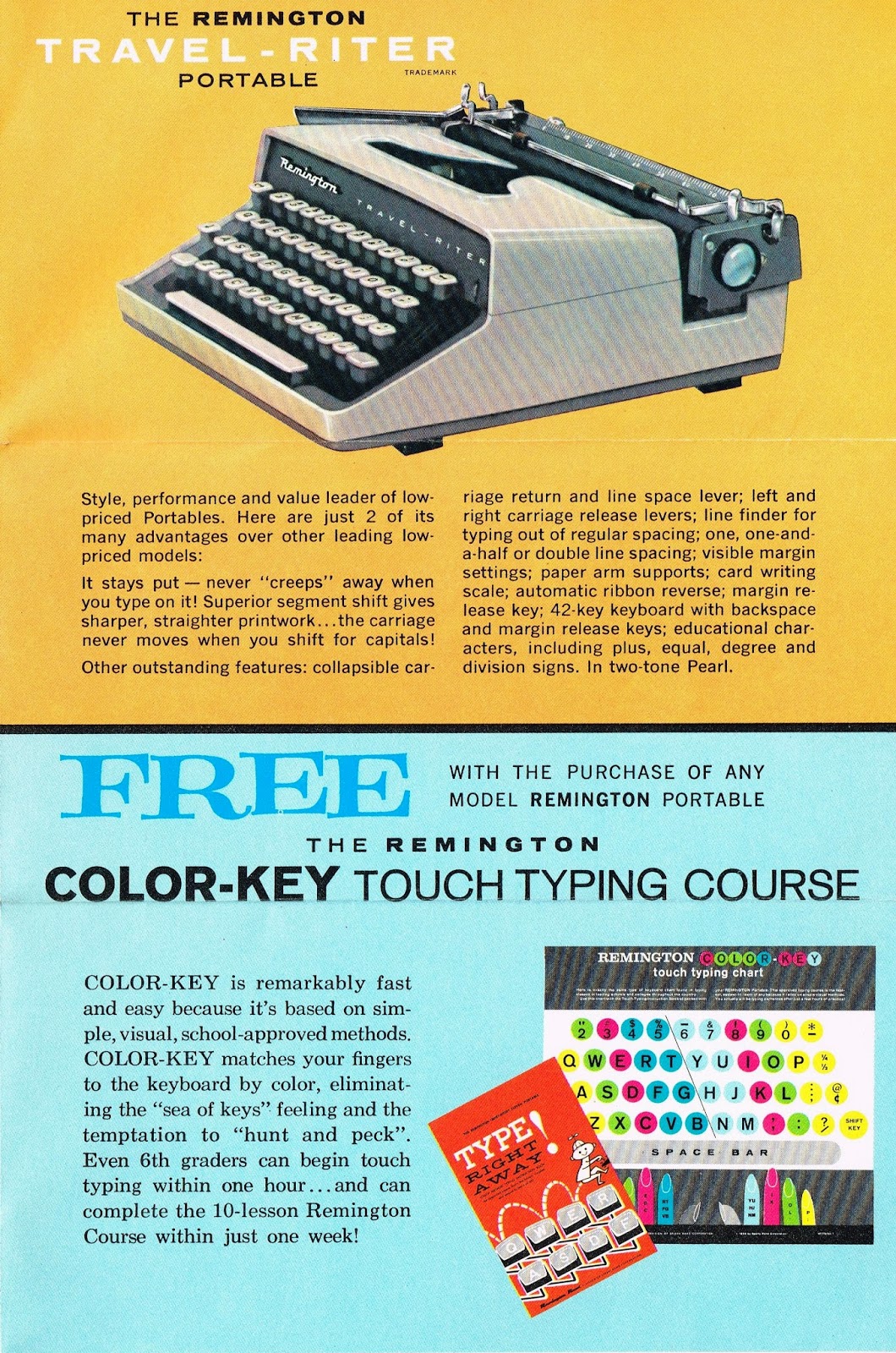 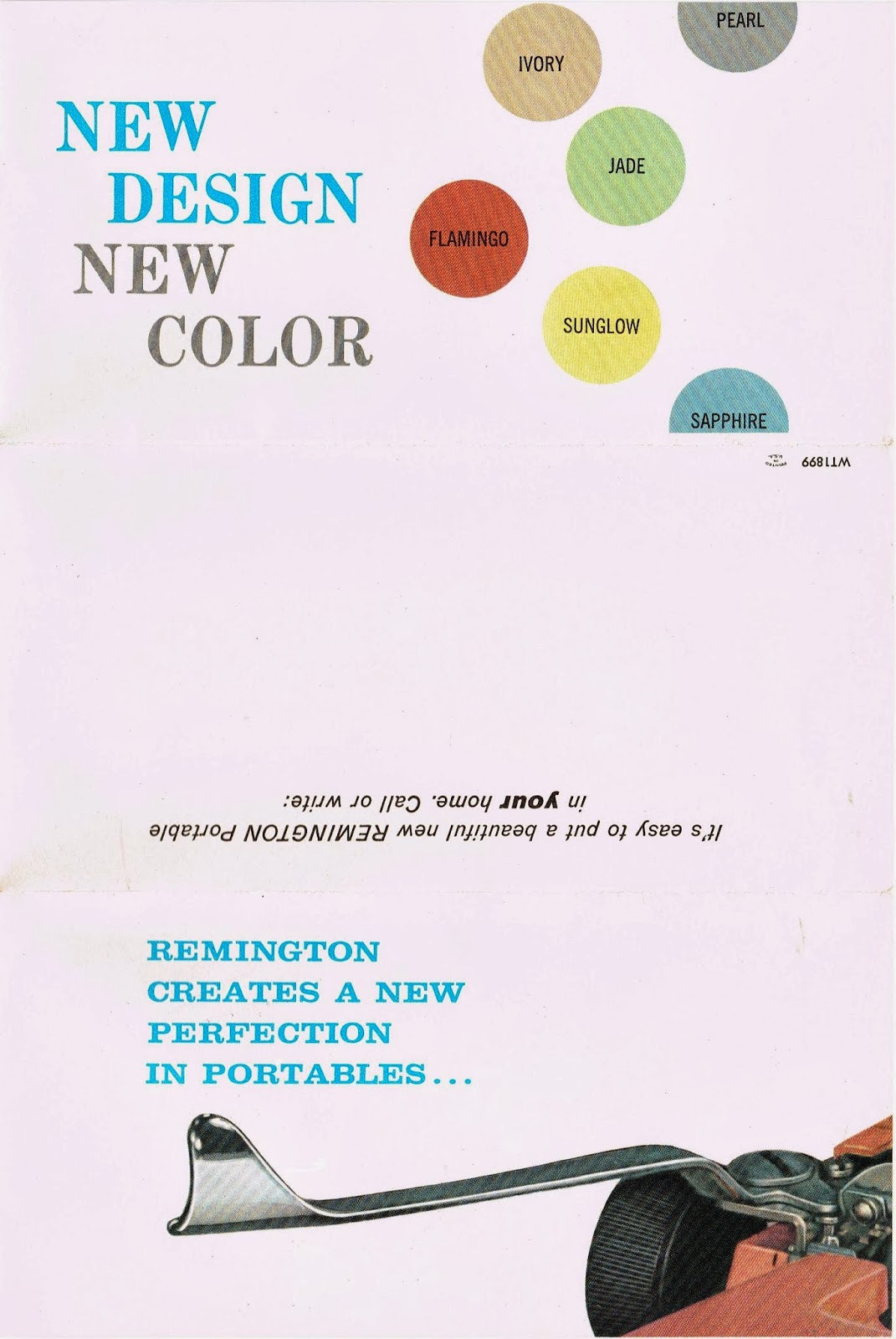 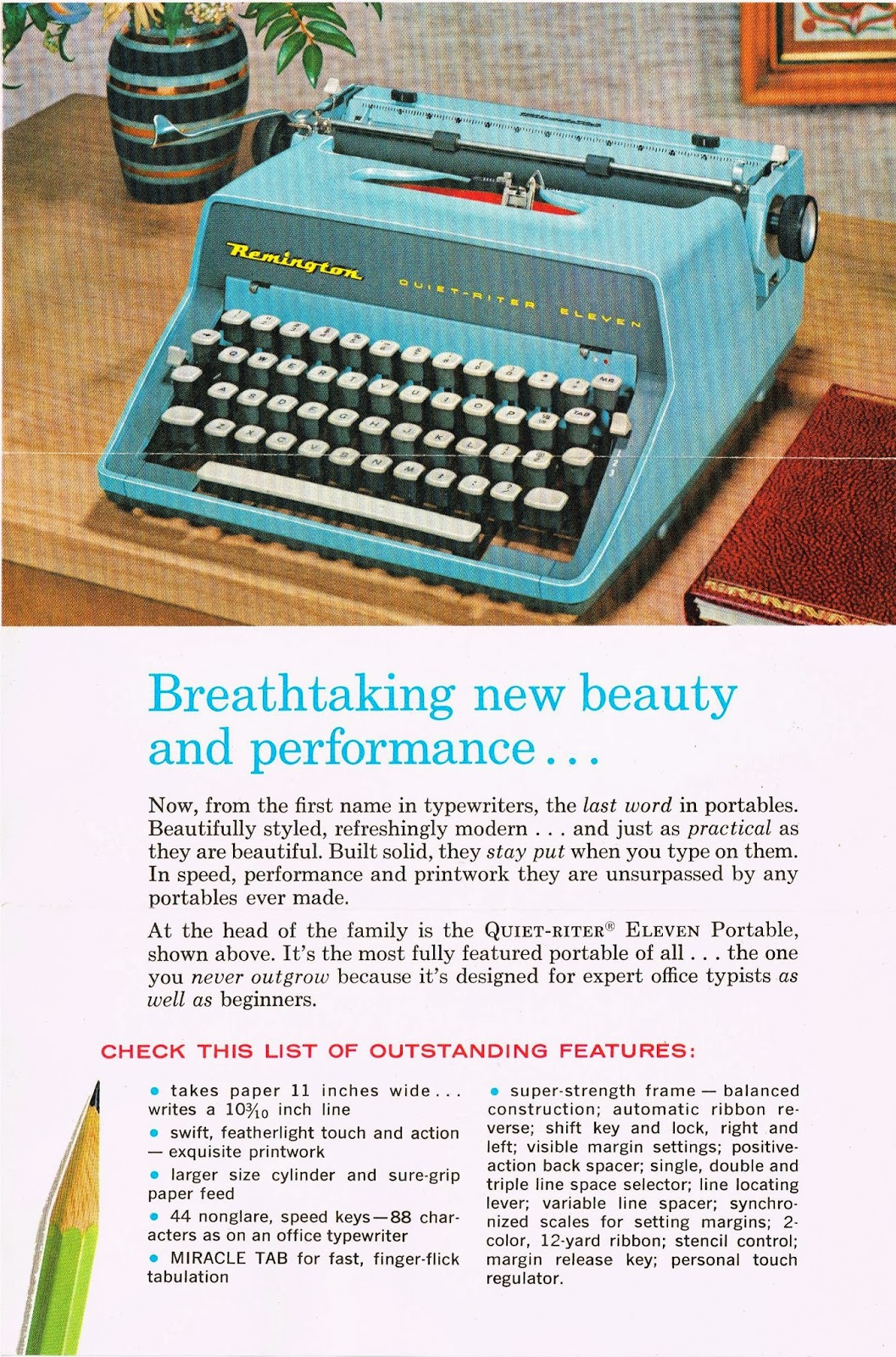 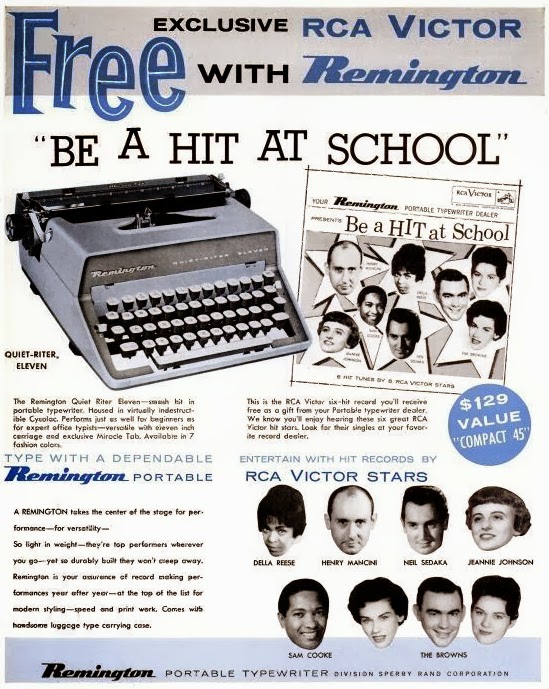 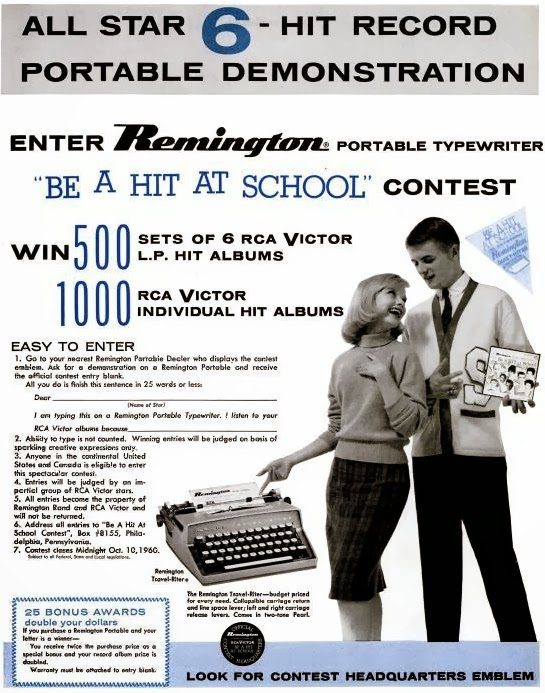 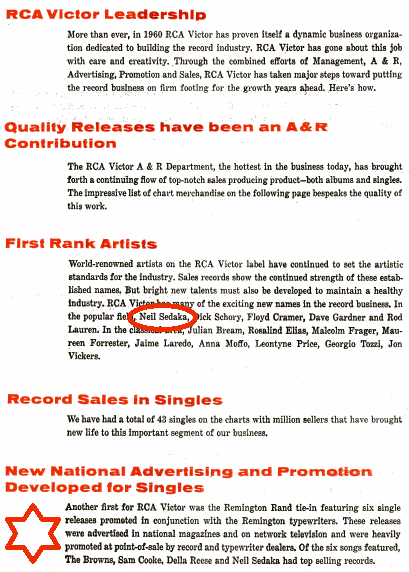 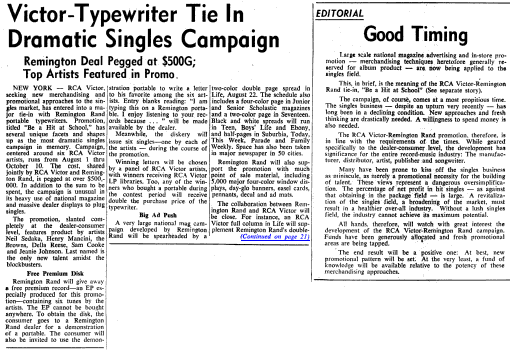 It's not like to me to get excited on reading about an upcoming musical. But when I saw this "Spotlight" item in the latest Vanity Fair to reach these shores (December 2013, with our own gorgeous Nicole Kidman on the cover) about a Carole King musical called Beautiful, I there and then decided this was one to which I had to go. To say I am a big Carole King fan is to suggest I am only mildly fond of mango and blood orange-flavoured yogurt. 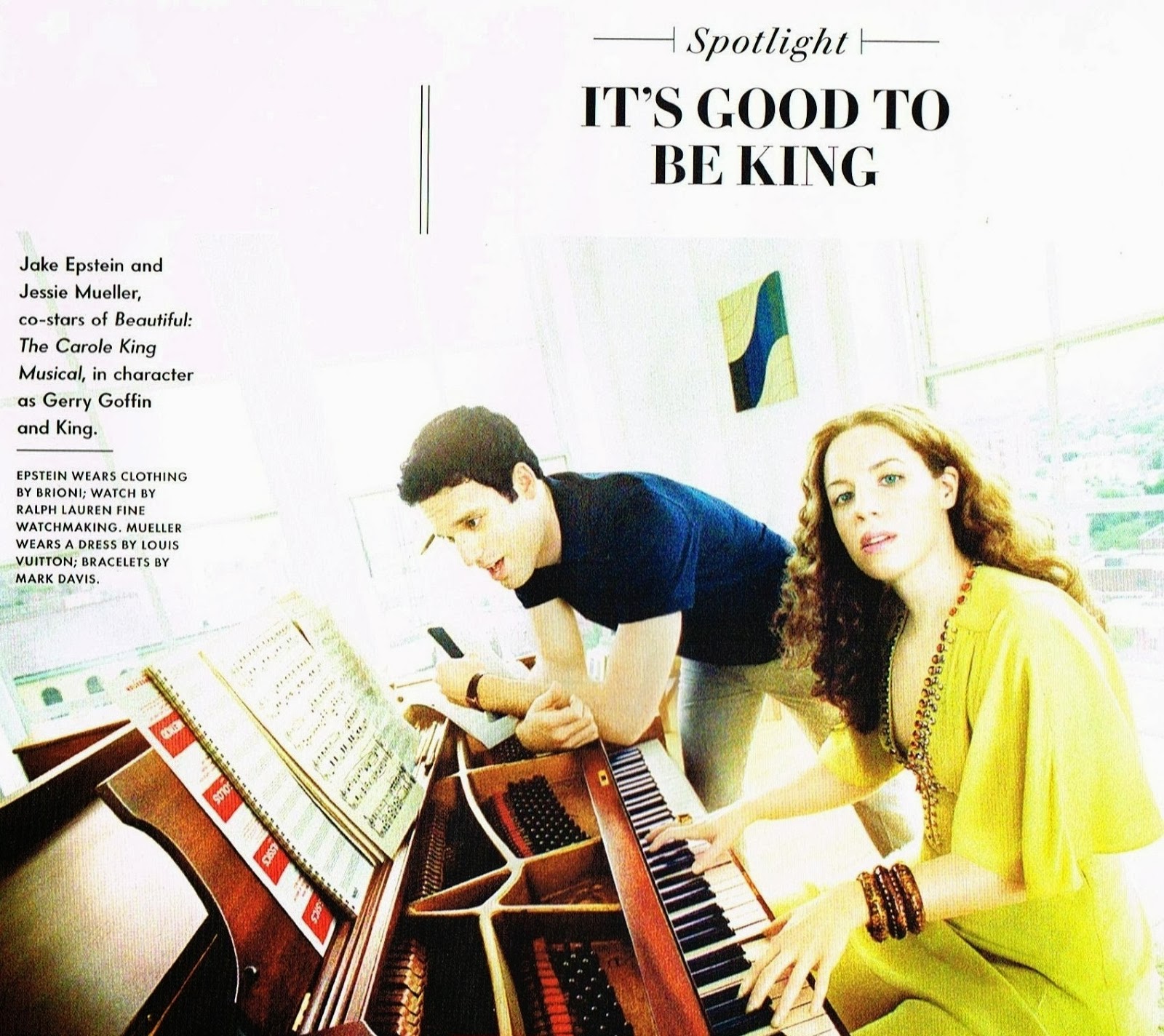 Later that evening, at a dinner party with my good friend, the blues, jazz and rock music aficionado and ArtSound "Down in the Basement" radio show host Peter Crossing (just back from photographing typewriters in Barbados), I mentioned the Carole King show. My enthusiasm for it was shared around the table. Everyone there seemed to be as keen as I am to see Beautiful.
Never one to miss the chance of chucking a rock or pop trivia question Peter's way, I asked, "Did Carole King ever write and record a song called Oh! Neil (in response to Neil Sedaka's Oh! Carol). To my surprise, the consensus was "No". In fact, she did. And here it is:

Listen to the clever King lyrics. It's very funny.
Maybe it's just me, but I can't seem to think of Carole King without also thinking of Neil Sedaka.
And so it is that Neil Sedaka has been on my mind these past few days.
While I was staying with Richard Polt in Cincinnati last October, Peter Crossing sent me a piece of Sedaka trivia - along with a link to a WordPress article about Sedaka ("The typewriter, the Walkman, Polaroid cameras and Neil Sedaka all have been the victim of disruptive innovation: forces that beyond our control attack an industry and render it obsolete.").
Peter had been reading my joyous blog posts from Cincinnati and Fairmont, West Virginia, and commented:

"Looks like you and all the gang have had a wonderful time. Fulfilling. As I understand it, you are close to Wheeling, West Virginia. Wheeling, West Virginia was a hit for Neil Sedaka - mainly in Australia - circa 1972." [The title track from an album, it reached No 20 in Australia in early 1970.]
The excellent article to which Peter linked - well worth a read - was by real estate agent Oliver Lovat and titled "5 Business Lessons Learnt From Neil Sedaka". In it, Lovat talks about "Perseverance" and "Unity Trumps Division".
I had an inkling of these two lessons in 1974. A girlfriend had made a late request, for me to pull some strings and get six tickets, for her and I and four of her closest friends, to attend a Van Morrison concert in Dublin. I did as commanded and was delighted to have succeeded: it was without question the best concert I have ever attended, bar none.
Shortly after, hoping to return the favour in full, the five young women got together and bought us all tickets to another show. When I heard it was a Neil Sedaka concert, however, I was much less than impressed. Nonetheless, eager to be once more seen in the company of these five beautiful women,  I reluctantly dragged myself along. To my utter astonishment, it also turned out to be one of the most memorable shows I've ever been to, certainly one that had me up on my feet jiving. Not having paid much attention to Sedaka in the preceding 16 years, I was very much taken by what an enormously entertaining, versatile and enduring talent he is.
Sedaka turns 75 on March 13. Notwithstanding my own lack of hesitation in signing a petition to have him inducted into the Rock and Roll Hall of Fame in Cleveland, he has yet to be given that honour and recognition, something he so richly deserves.
Lovat probably had no idea Sedaka had been part of a promotion for Remington typewriters in 1959, and I certainly didn't know it when I was made a gleefully-accepted offer to interview him in 2005. Otherwise I would most definitely have raised it with him, never being one to miss the opportunity to discuss or promote typewriters: 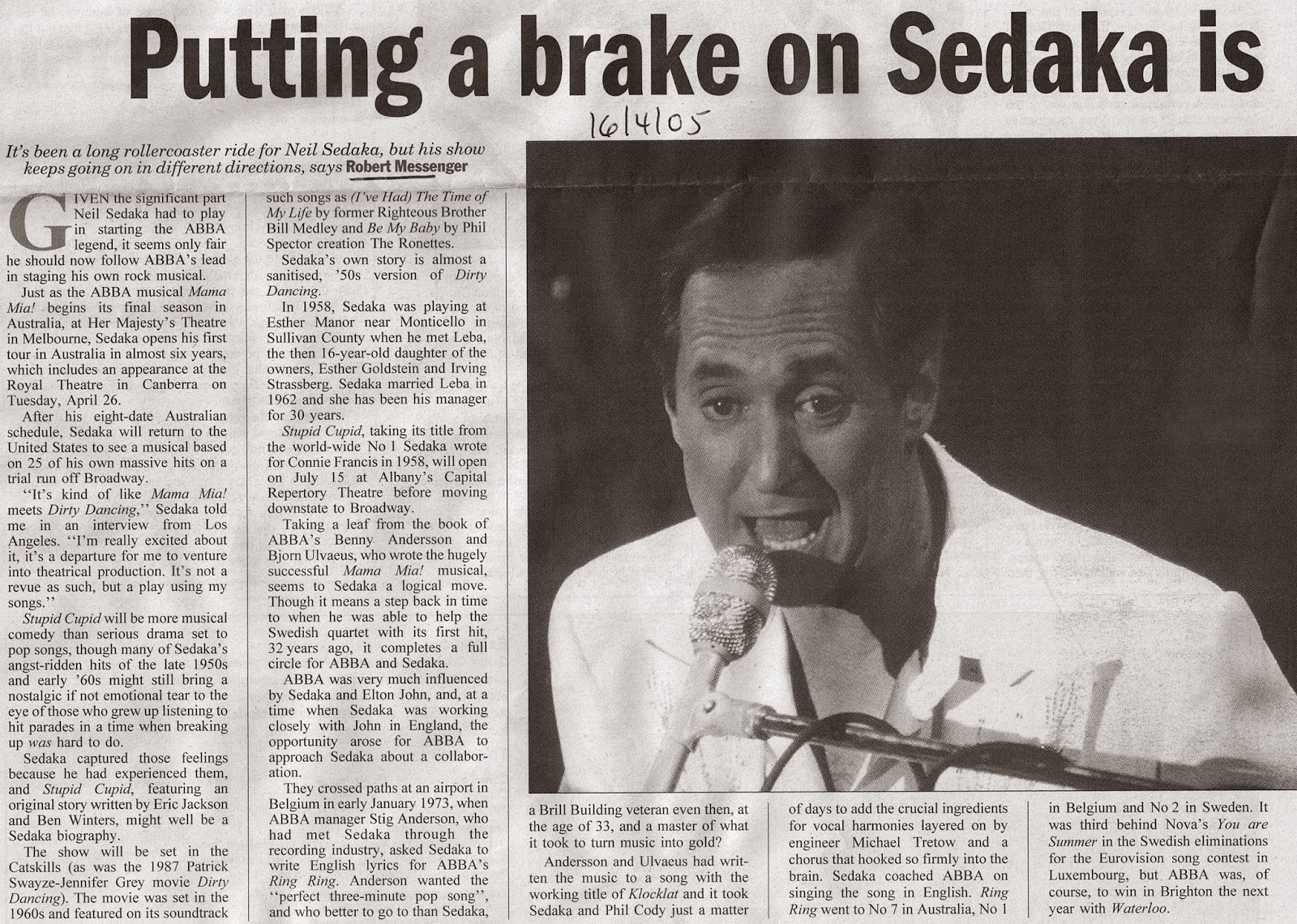 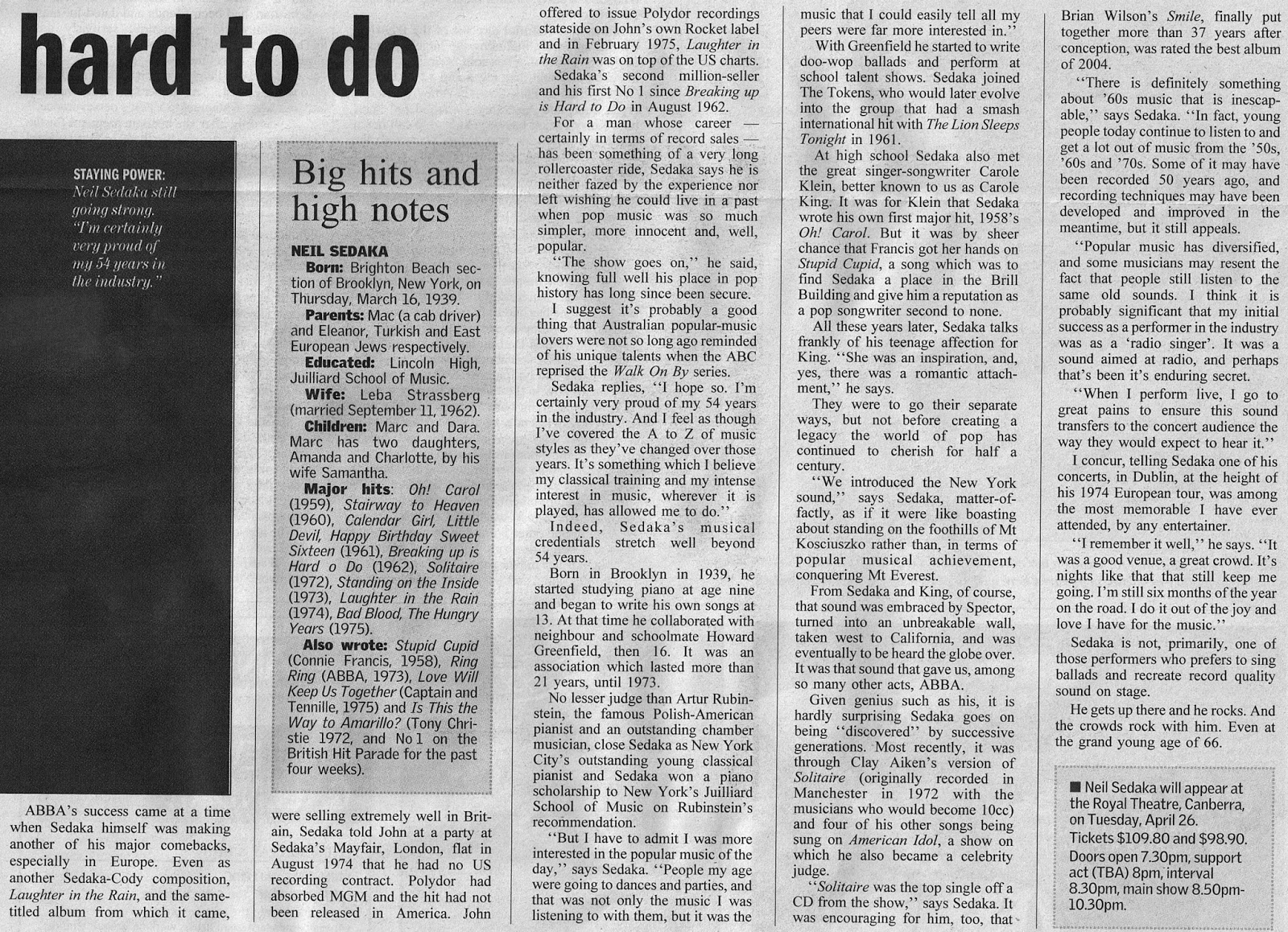 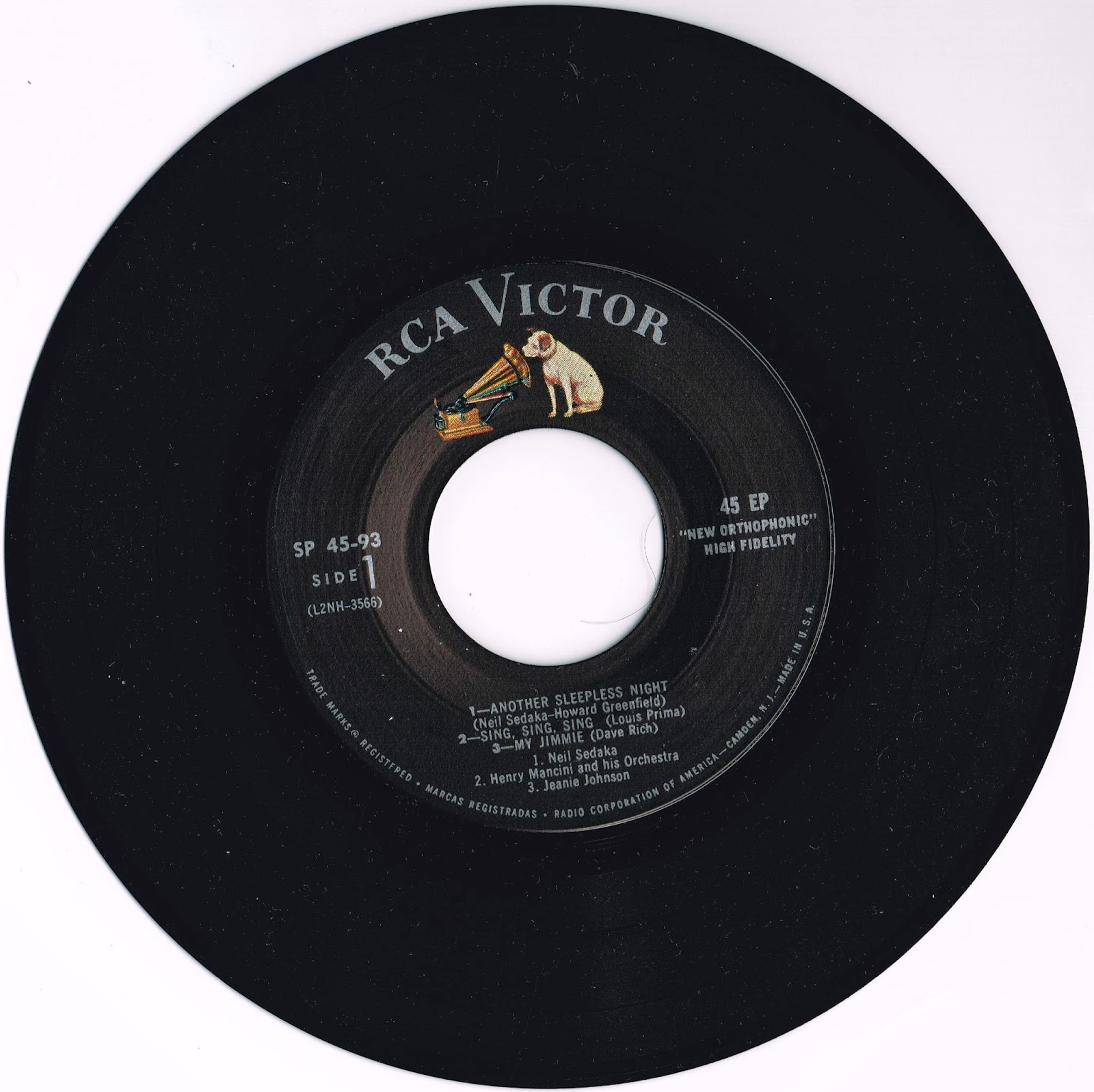 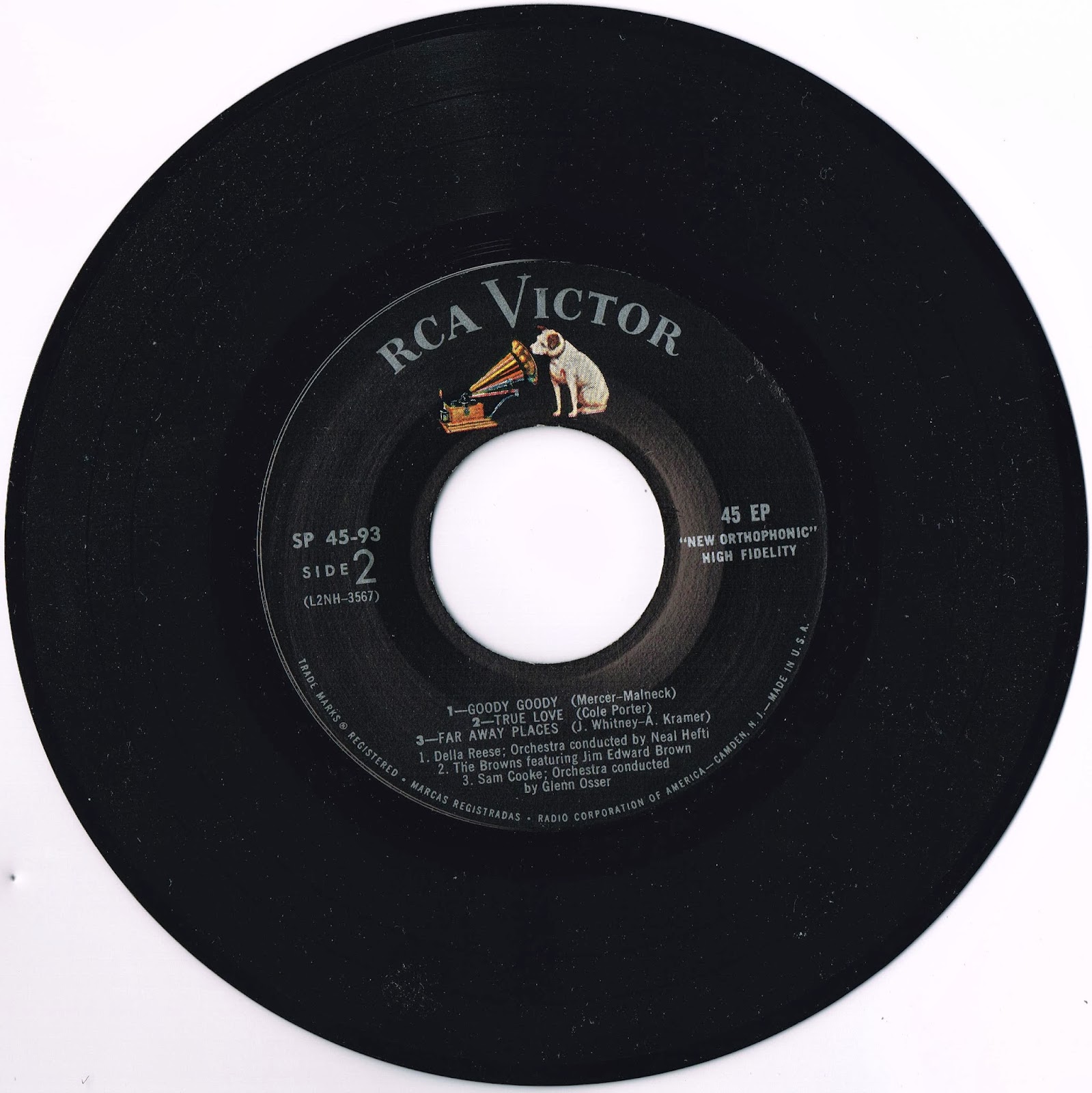 Here are is Sedaka's Another Sleepless Night and Sam Cooke's Far Away Places from this EP:

Posted by Robert Messenger at 15:55

Typewriters and gramophones do and did go together well then :-)
Berliner and his gramophone company (later to become His Master's Voice and EMI) started out as The Gramophone And Typewriter company even...