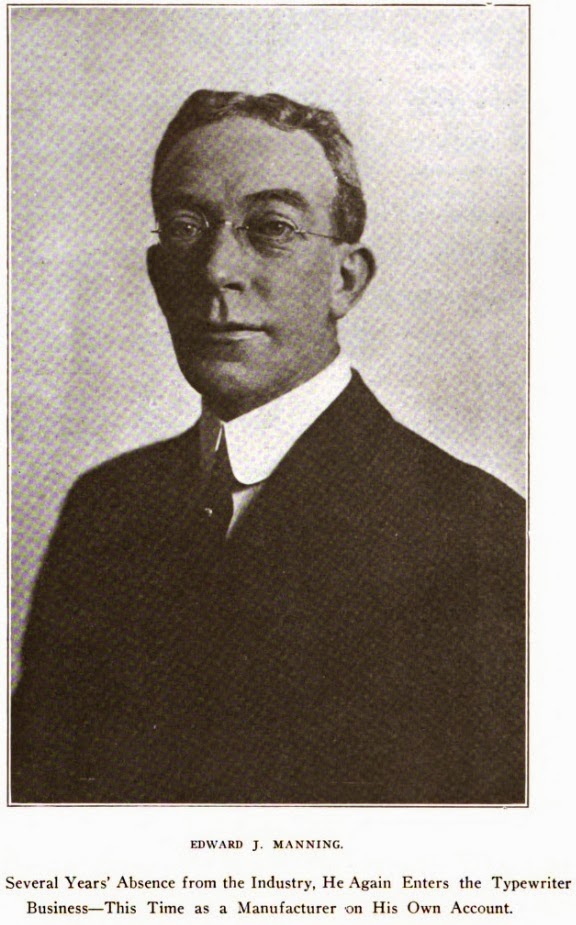 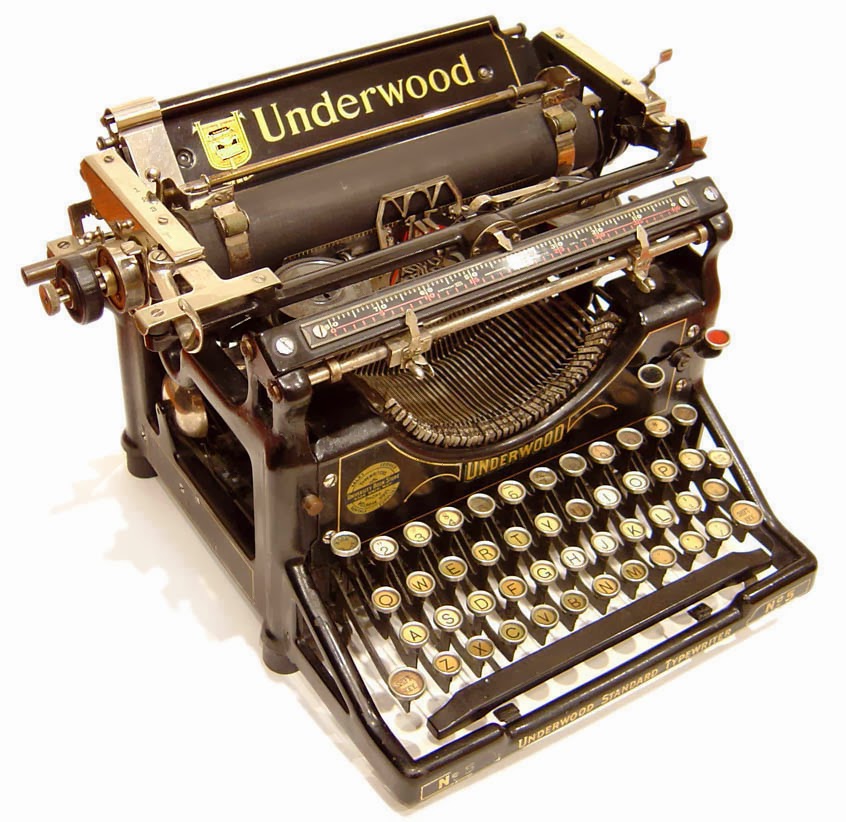 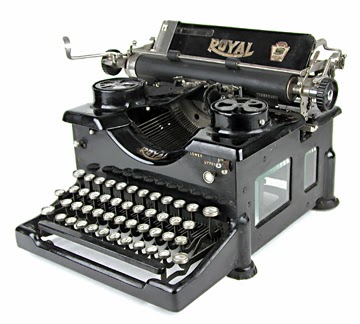 myTypewriter.com
Others will no doubt beg to differ, but in my opinion the Underwood 5 and the Royal 10 represent the all-time benchmarks in standard-size typewriters. For one thing, their commercial success was quite staggering - we are talking of sales in the millions. As Paul Roberts says at the Virtual Typewriter Museum, "The Royal 10 is another giant in the typewriter market. Like the Underwood 5, it is one of the machines that essentially marked the end of the history of typewriter development. Machines like the Royal 10 continued to be built for many decades, with most changes limited to cosmetic alterations."
What isn't a matter of opinion is that Edward James Manning had a hand in the development of both the  Underwood 5 and the Royal 10.
Manning was pretty much the leading typewriter "gun for hire" from the early 1890s until 1916 (when the photo at the top of this post was taken).  Manning had:
1883 - started as a teenage apprentice mechanic.
1884 - Joined Garvin, which was making the Hammond.
1886 - joined Hammond itself.
1895 - worked with Franz Xaver Wagner.
1896 - joined Underwood.
1907 - joined Royal.
There was much rejoicing at Underwood when Manning joined its ranks, having worked on the groundbreaking Wagner frontstrike with the inventor himself. And there was much gnashing of teeth when Manning was lured away from Underwood to join Ed Hess and Lewis Myers at Royal.
When Underwood took over making the Wagner, it effectively ended the 20-year quest for a fully visible typewriter and Underwood soon caught and passed pioneer manufacturer Remington in the marketplace. The 1901 Underwood 5 cemented the company's place at the head of the field and Underwood jealously protected that place.
So when, in 1914, Royal replaced its line of flatbed standard typewriters with the 10, this new "begging dog" machine was much too close for comfort, too close to the bone for Underwood to ignore.
Still smarting over Manning's defection seven years earlier, Underwood suspected Manning had taken with him to Royal the secrets of the Underwood 5's success.
In 1915, Underwood instigated legal action, first against Manning himself, then, having failed in that case, against Royal, each time claiming patent infringement. 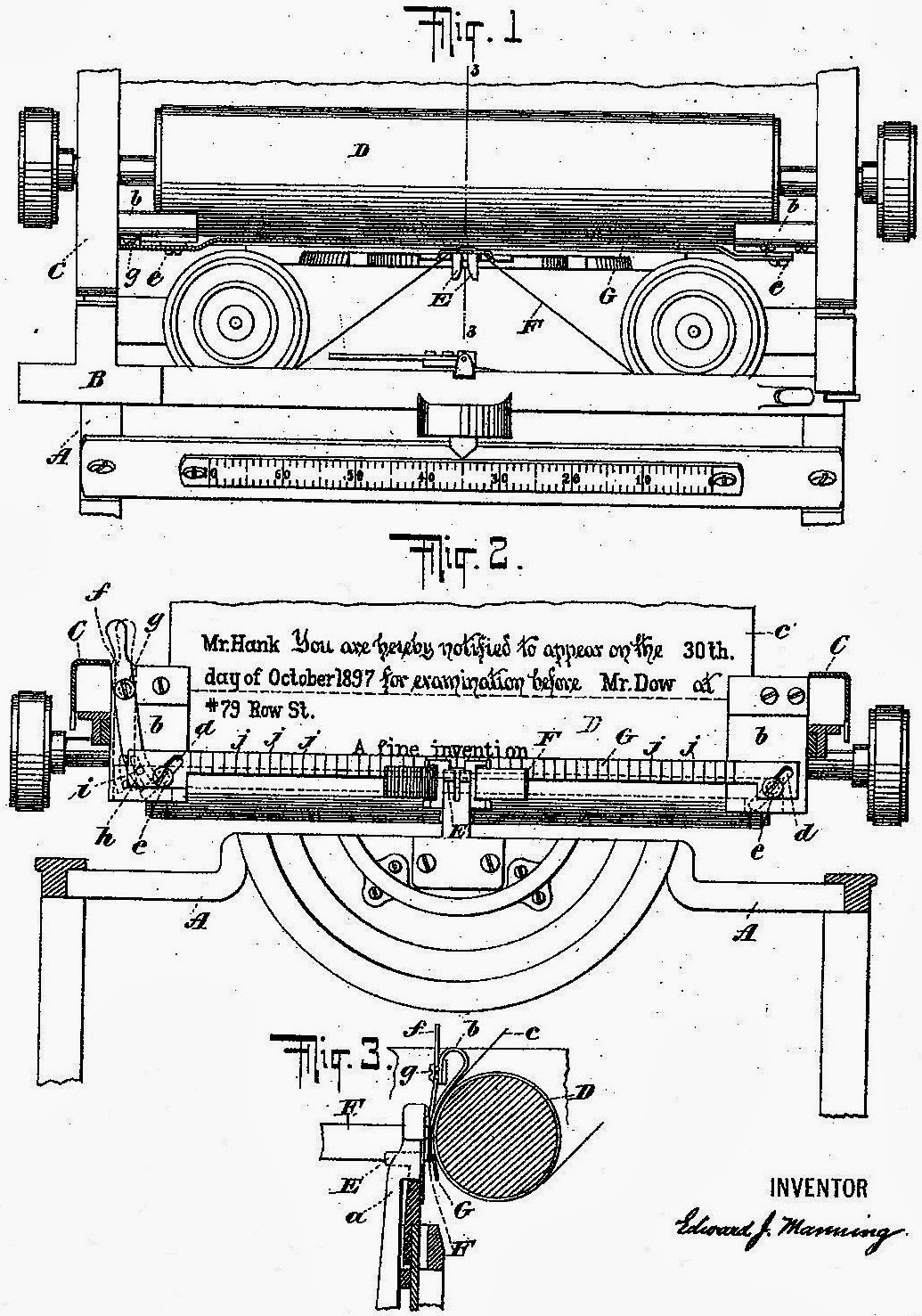 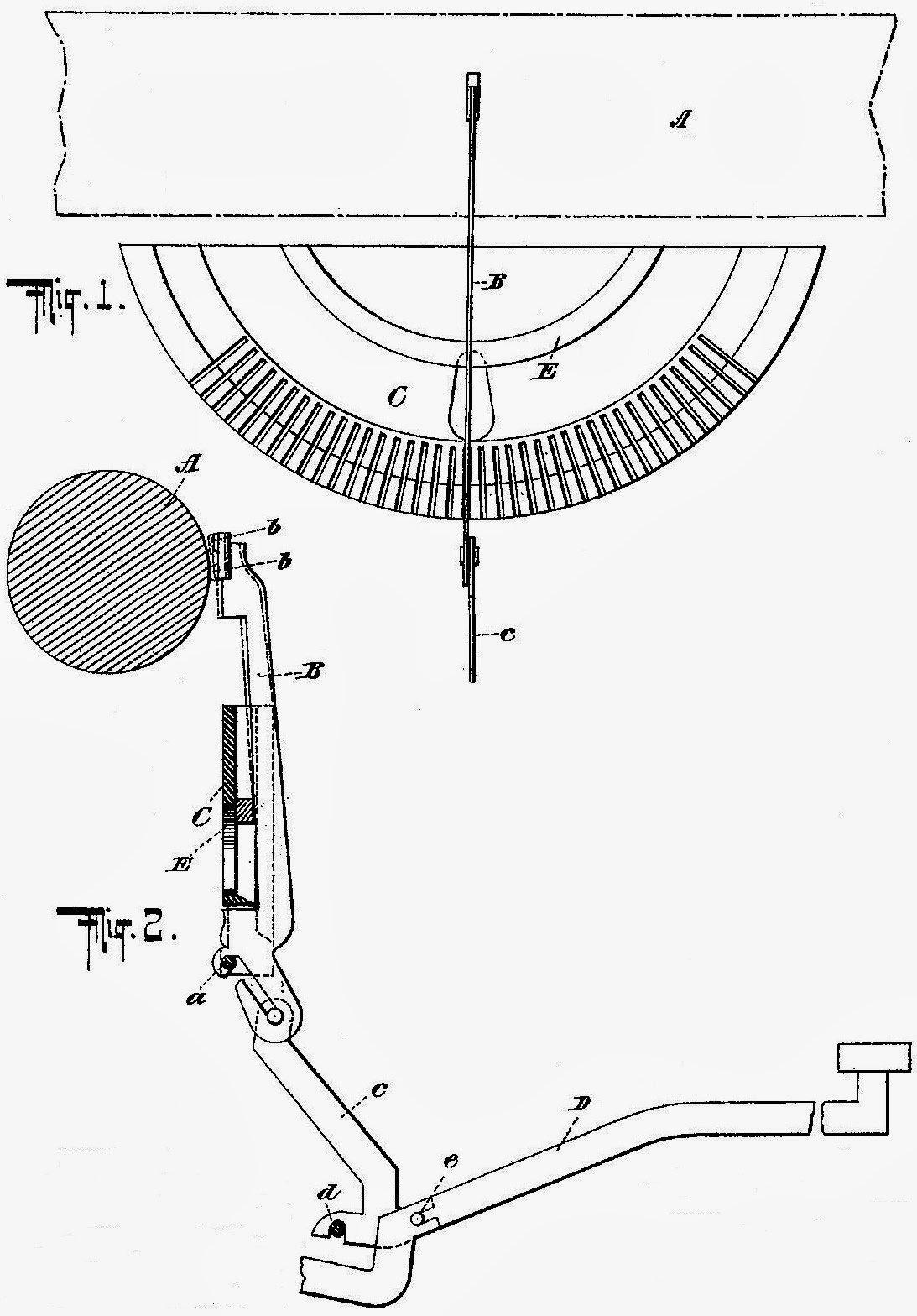 612858, Manning to Wagner, May 1897
Underwood argued that a Manning patent from 1897, assigned by Manning to Wagner, belonged to Underwood, as it had taken over the Wagner company.
In the first instance, Underwood Typewriter Company versus Manning in the New York District Court in March 1915,  it was found that "An individual [Manning] cannot be held liable for infringement of a patent, where the alleged infringing device was made and sold by a corporation of which he was not in control [Royal], and which is not shown to be insolvent, independently of an action against the corporation." Decree was found for the defendant [Manning]. This action concerned letters patent No 612,858, granted on October 25, 1898, to Manning and assigned to the Wagner Typewriter Company, "of which the plaintiff [Underwood] is the successor.
"The circumstances of the entire matter are unusual. Action was brought upon two patents, the one involved in this suit and No 609,036.
"In this suit a motion was made for preliminary injunction, based upon the proposition that the defendant [Manning], as the patentee, could not contest the validity of the patent obtained upon his own application, and basing infringement upon allegations that the defendant [Manning]
had entered into a contract with a rival corporation, which it was charged had used the inventions of the patents taken out by the defendant as manager and superintendent of the Royal Typewriter Company’s factory.
"The application for preliminary injunction was denied ..."
Two months later Underwood then took action in the Circuit Court of Appeals against the Royal Typewriter Company. Again Underwood lost, with costs being awarded to Royal. 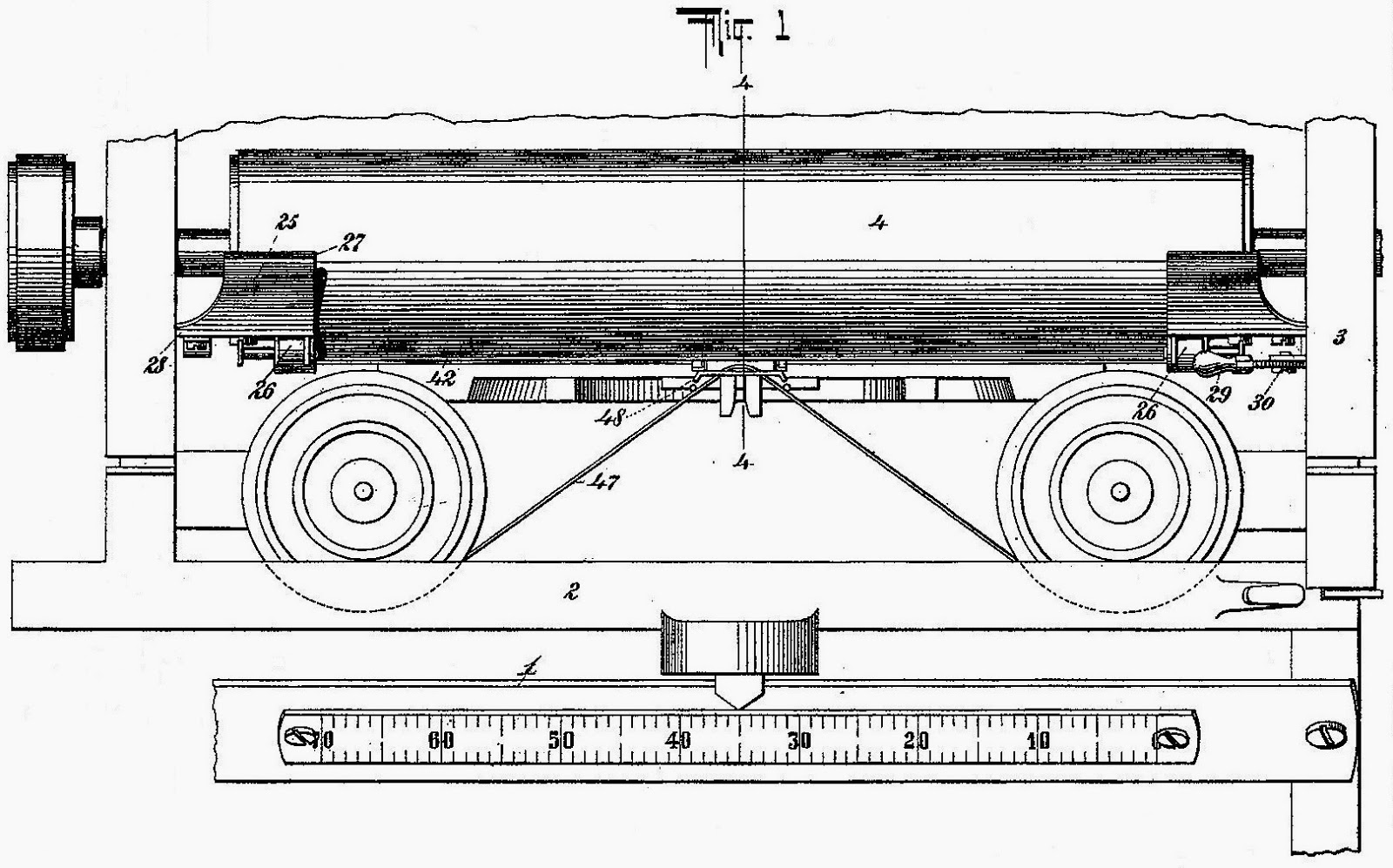 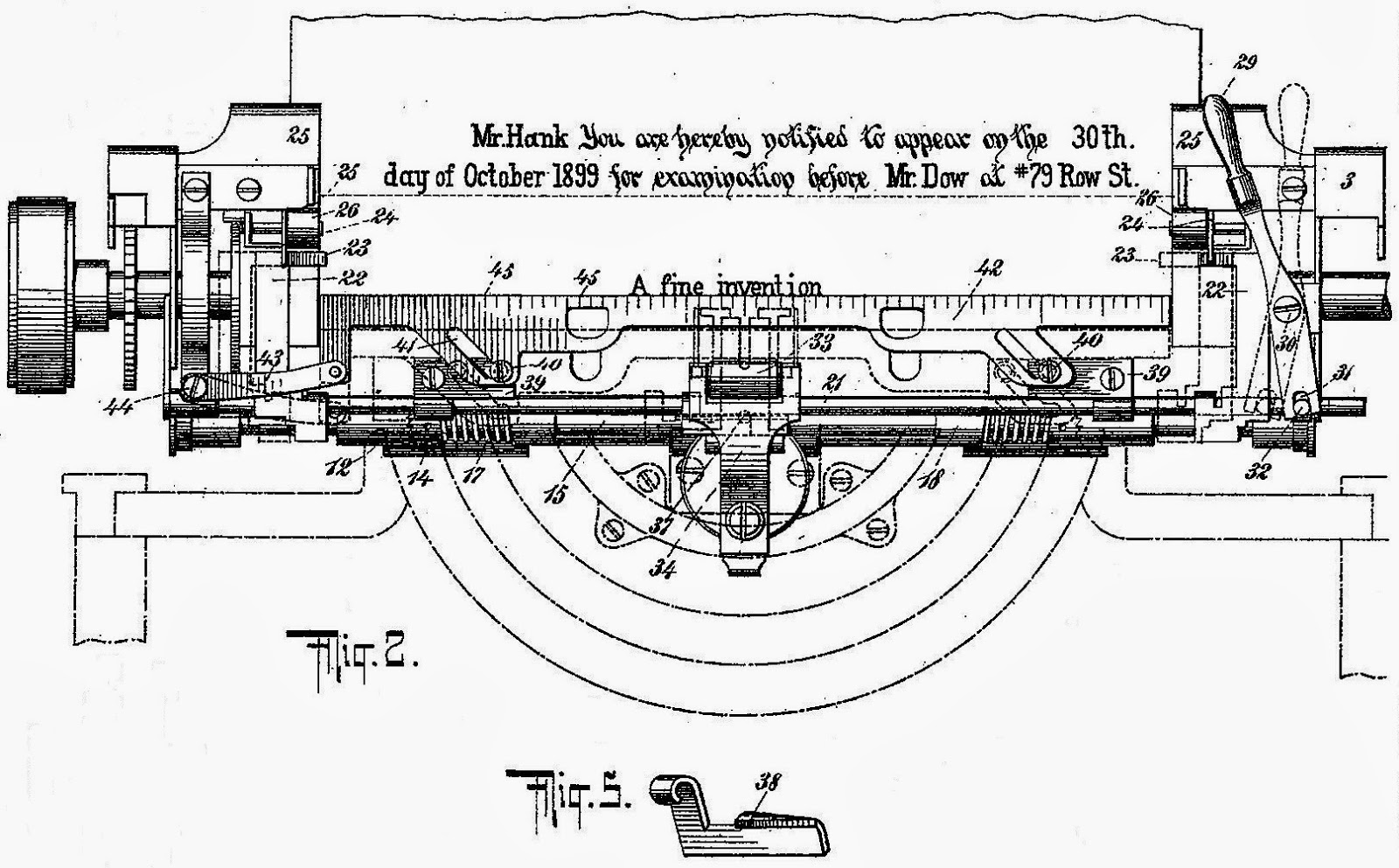 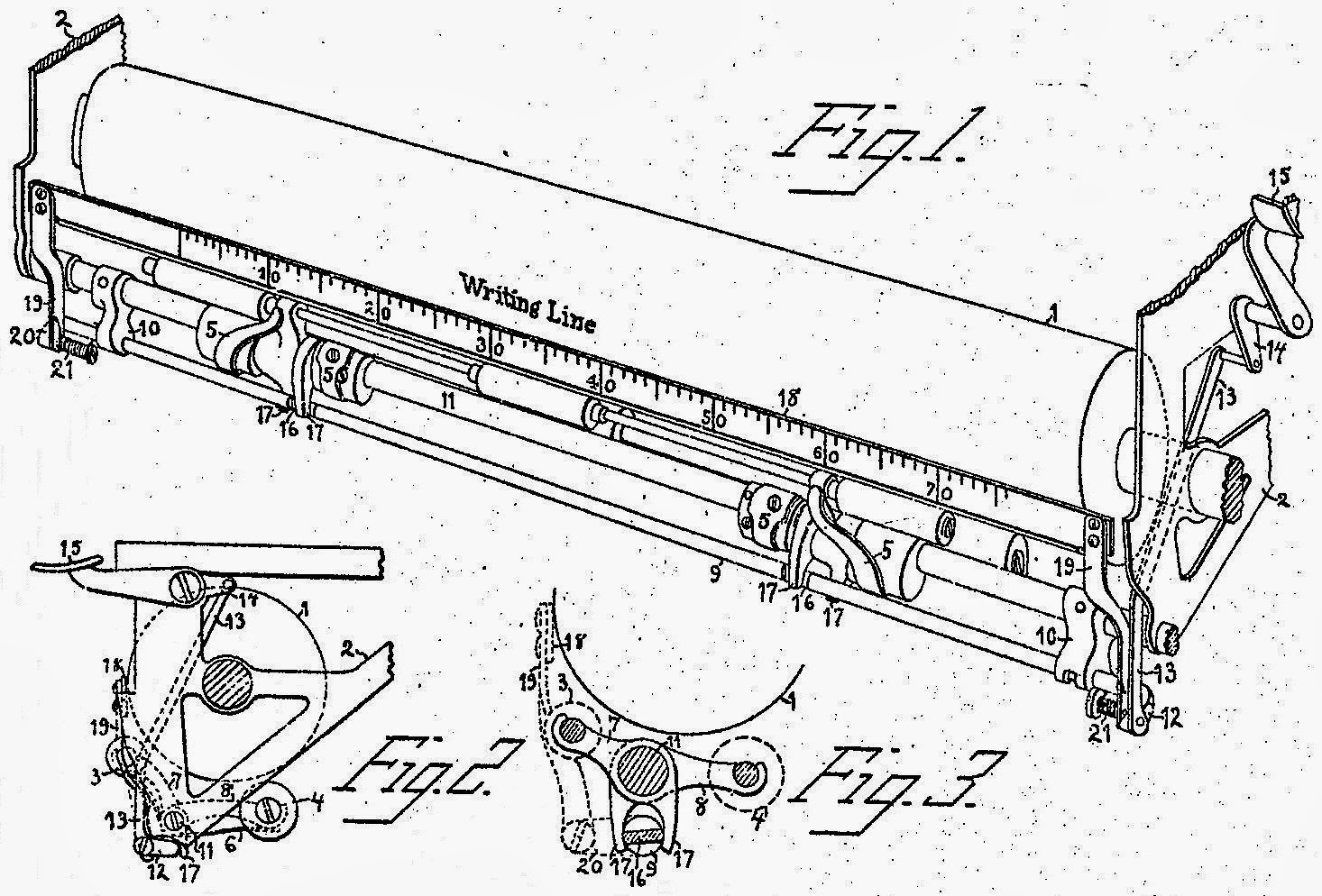 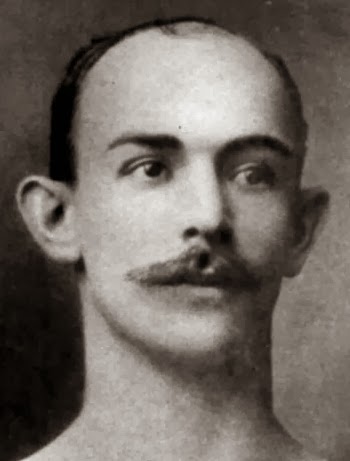 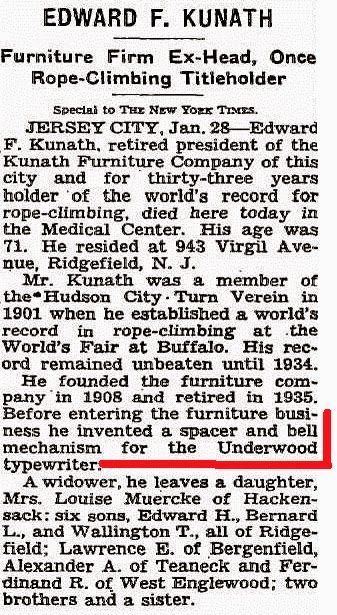 "In an overcrowded art, where a broad generic invention is not possible,  a defendant who omits altogether one element of a patented combination cannot be held an infringer, even though he makes another element do the double work.

"After the hearing, a motion was made by the complainant [Underwood] to add to the record letters patent No 1,100,301 issued to the defendant [Royal] as assignee of [Ed] Hess, June 16, 1914. This motion was granted.
"The record shows that the typewriting art has been developing for at least 40 years, during which period, although the general principle of operation remained unchanged, innumerable changes have been made and minor improvements added. 1100301, Hess to Royal, November 1905
"At the dates of the Manning, Wagner and Kunath patents, there was no opportunity for a broad generic invention in typewriters and it cannot be successfully contended that the claims in issue cover such an invention. They must be strictly construed and limited to the precise improvements claimed. There is no room for the doctrine of equivalents. The main questions involved are whether the claims in suit are valid and if so whether they are infringed."
Here is the Manning story as of 1912: 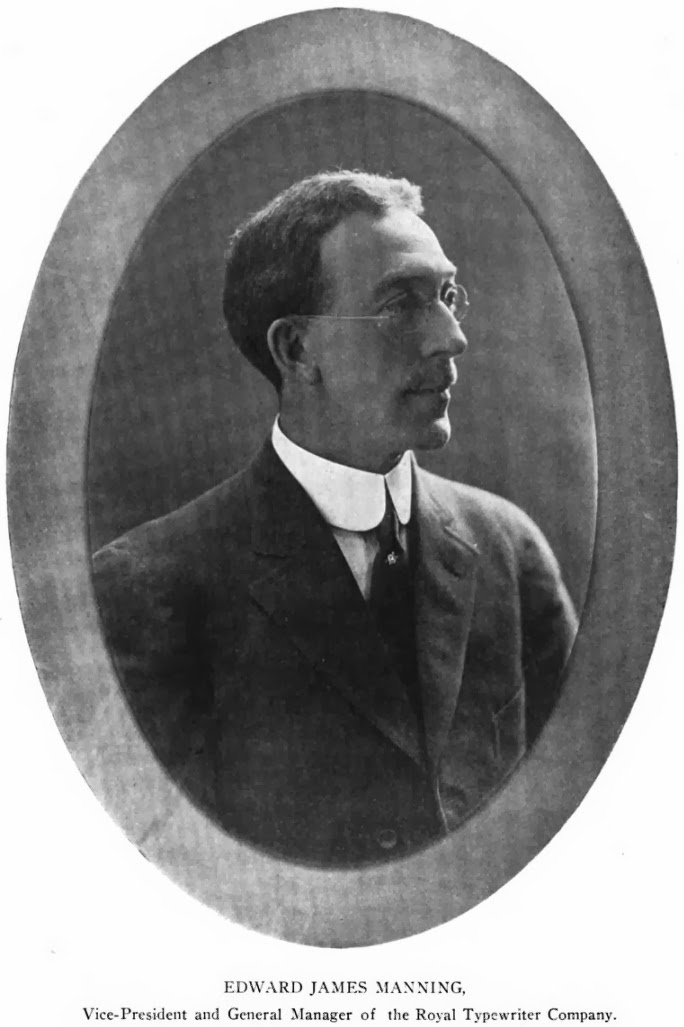 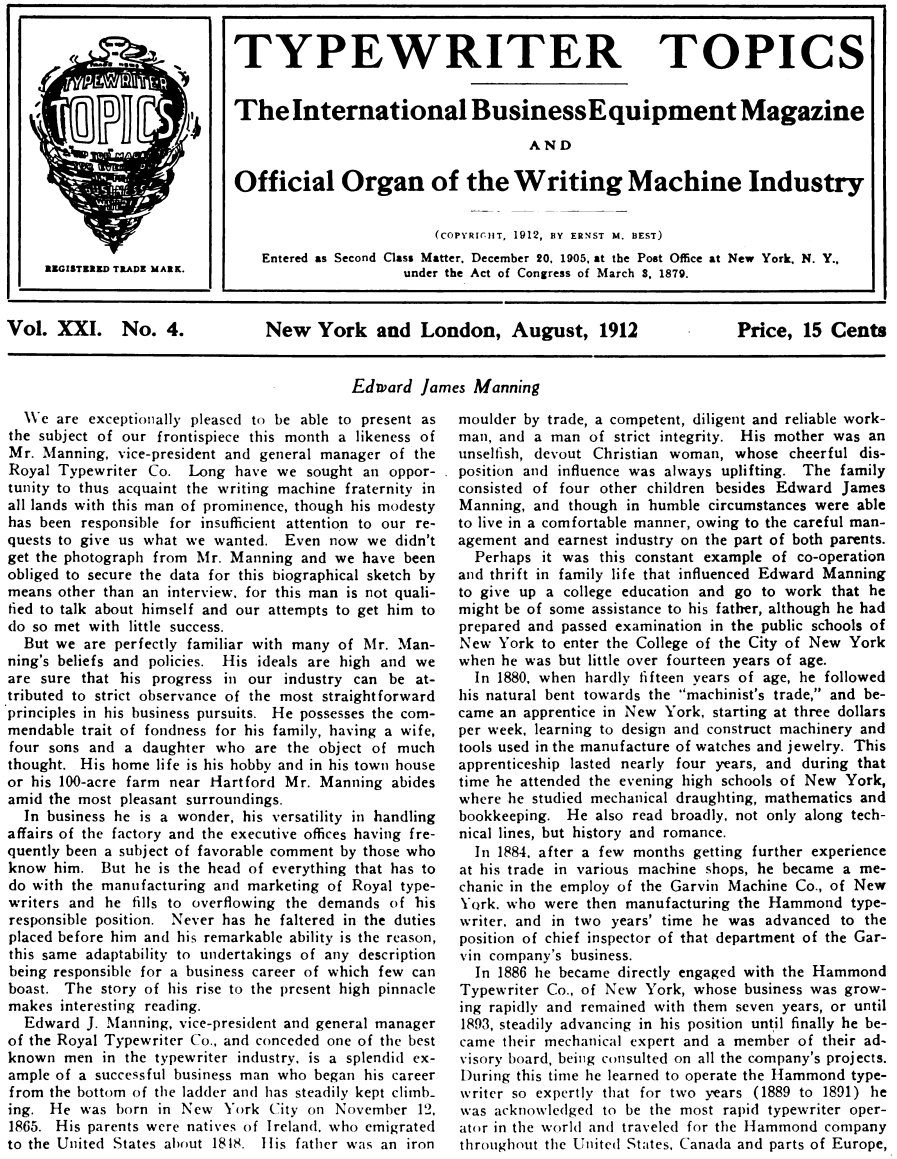 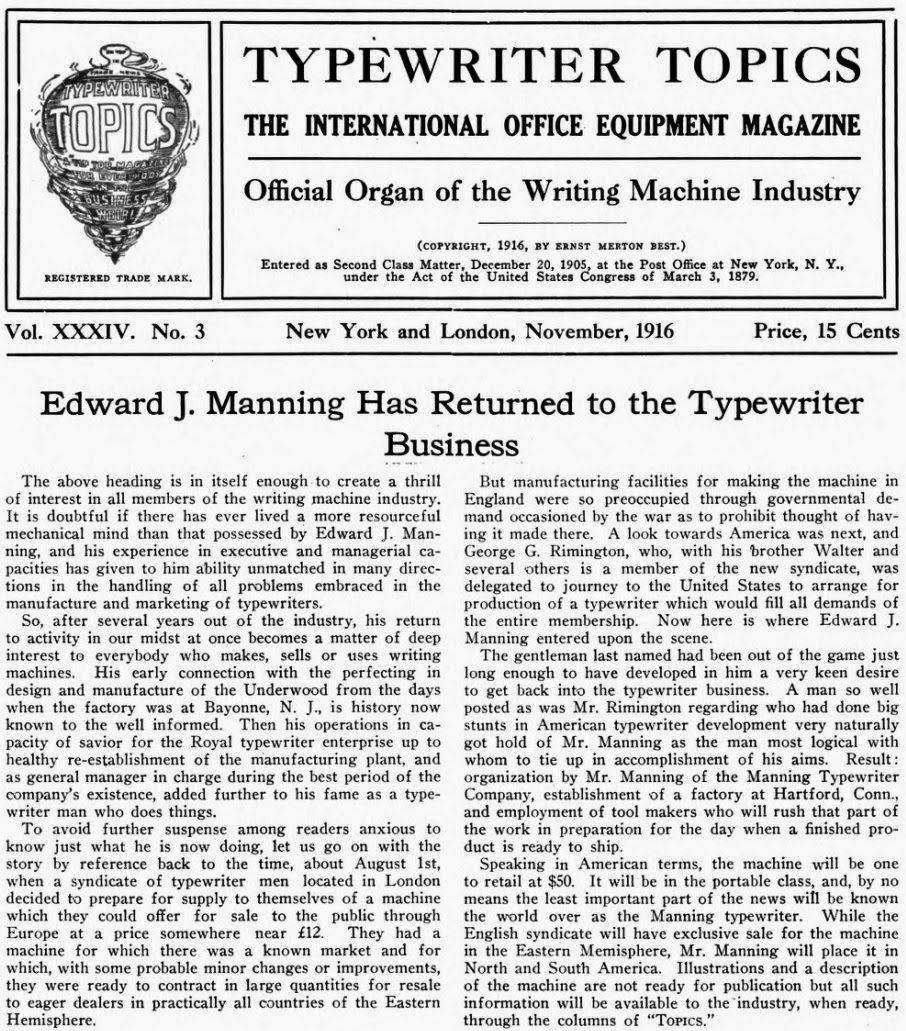 Posted by Robert Messenger at 15:00

Quite interesting. I often wondered why the Underwood 5 looked so much like the Royal 10.