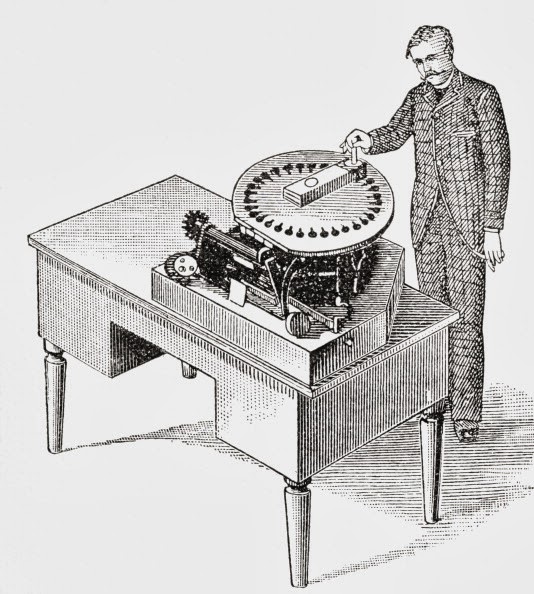 No, not Henry Mill and his "typewriter". This one is from 1836.
300 YEARS SINCE
FIRST 'TYPEWRITER' PATENT
OK, so I'm a few days late with my December Update. My excuse is that I waited until January 7, since today is the 300th anniversary of English engineer Henry Mill's "first typewriter patent".
Mill was on this day in 1714 granted a patent (No 395) by the court of Queen Anne for "an artificial machine or method for the impressing or transcribing of letters, singly or progressively one after the other, as in writing, whereby all writings whatsoever may be engrossed on paper or parchment so neat and exact as not to be distinguished from print ... the impression being deeper and more lasting than any other writing, and not to be erased or counterfeited without manifest discovery."
Apart from these words, nothing exists to suggest Mill (c 1683–1771) actually built such a machine, even as a model. 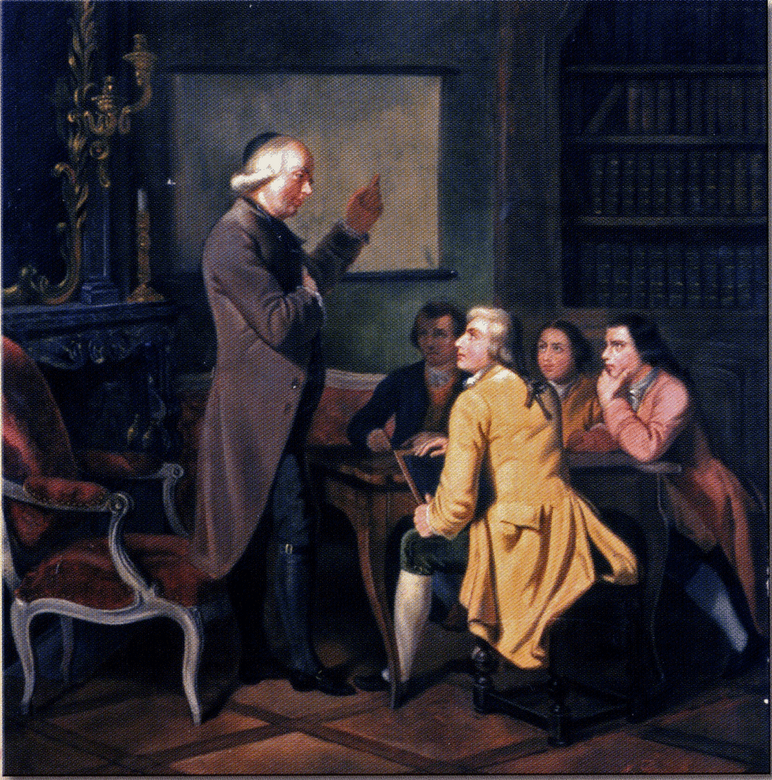 Charles-Michel de l'Épée
Mill's 1714 patent was one of three typewriter-related questions I heard pop up on TV quiz shows last month. I think it was on Stephen Fry's QI.
On the excellent BBC quiz show Eggheads, a challenging team was offered typewriting as one of three possible answers to the question: "What did the Abbé Charles-Michel de l'Épée introduce to his French school in 1760?" [A bit early for typewriters, I must  admit.]. The other options were semaphore and, of course, sign language. De l'Épée's manual alphabet has survived basically unchanged in France and North America until the present time. Laurent Clerc was arguably his most famous graduate. Clerc went to the United States with Thomas Hopkins Gallaudet to found the American School for the Deaf in Hartford, Connecticut, in 1817. Gallaudet's son, Edward Miner Gallaudet founded a school for the deaf in 1857 in Washington DC, which in 1864 became the National Deaf-Mute College. Now called Gallaudet University, it is still the only liberal arts university for deaf people in the world.

Among authors whose names came up on an Eggheads question last week were typewriter users Paul Auster (Olympia SM9) and Michael Frayne (Olivetti Lettera 22).
In Australia, Millionaire Hot Seat host Eddie McGuire asked a well-known Queensland journalist and writer "Which company made the first commercially successful typewriter?" McGuire called it a "Sholes and Gliddeán". Among the four choices was Underwood, which the contestant, surprisingly, said he'd "never heard of". But he won the money (a six-figure sum) with "Remington". IBM was offered as another option. 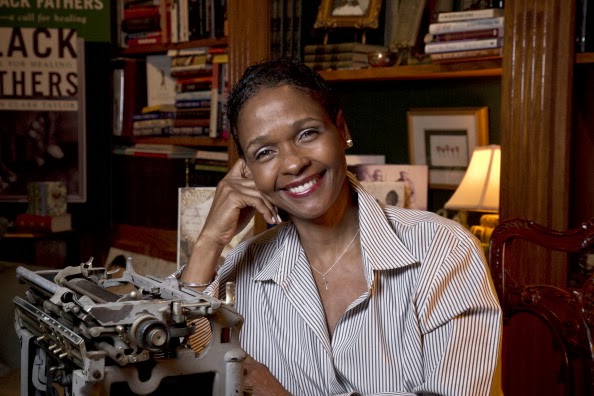 At her home in Great Falls, Virginia, this week, writer Kristin Clark Taylor posed at her desk with her mother's Underwood typewriter. The Washington Post article which features this image is headed "US history saved in Washington’s basements". It says, "Kristin Clark Taylor explores the family memories and historical moments represented in saved trinkets and clumps of dirt found in the basements of many Washingtonians. Kristin Clark Taylor poses the questions: Are the cherished trinkets, heirlooms and baubles of a Washingtonian any more interesting than, say, the baubles of a Bostonian or a Boca Ratonian? Put simply, are our collectibles simply cooler?" Read Kristin's biog here.

TYPEWRITERS IN THE NEWS 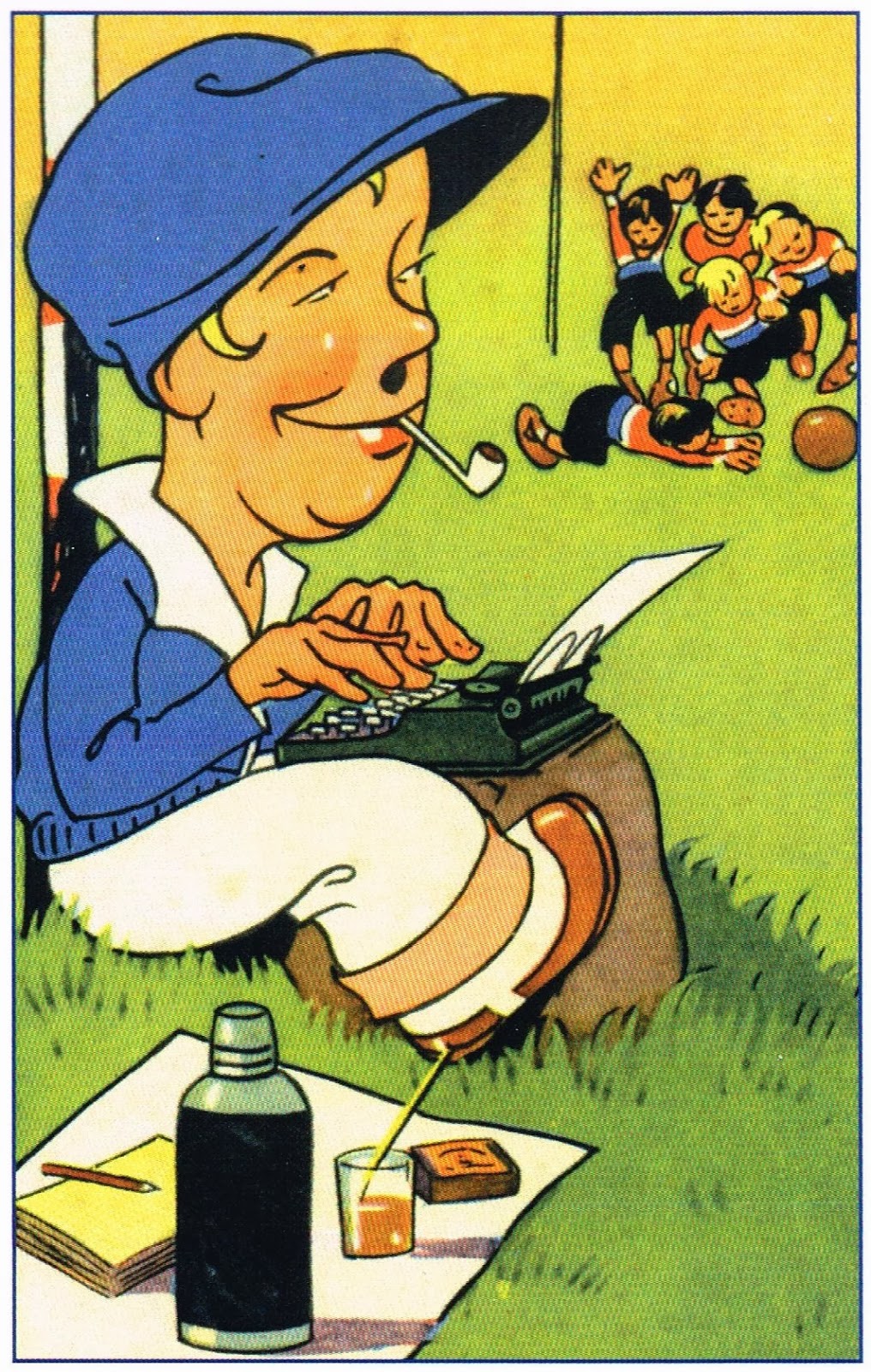 In my days of writing sport and columns, I seldom missed a chance to work a typewriter into the copy. But New Zealand cricket commentator Freddie Wilde drew a very long bow when he managed to link the "1000 monkeys on typewriters" line with a whirlwind world record innings from Corey Anderson, against the West Indies in Queenstown, in his opinion piece, "Monkeys, typewriters and broken records". The connection, apparently, is the idea of a 17-ball century (that is, 17 sixes). Anderson managed it in 36 balls. Below is the picturesque ground he scored it on: 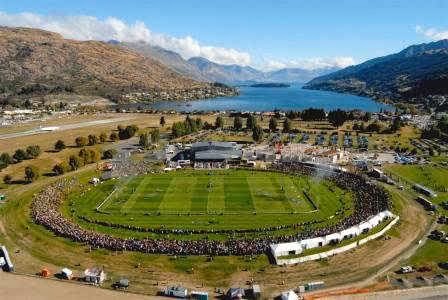 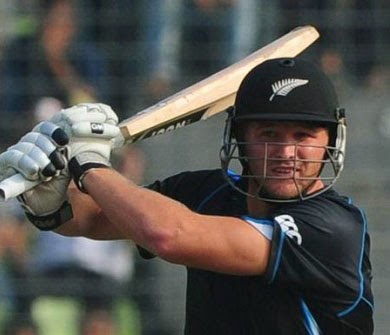 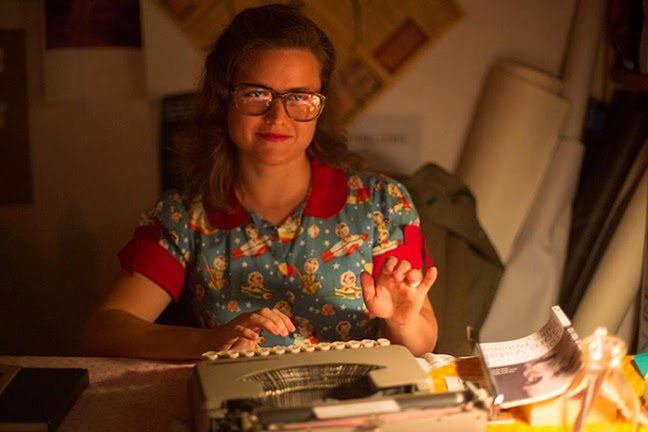 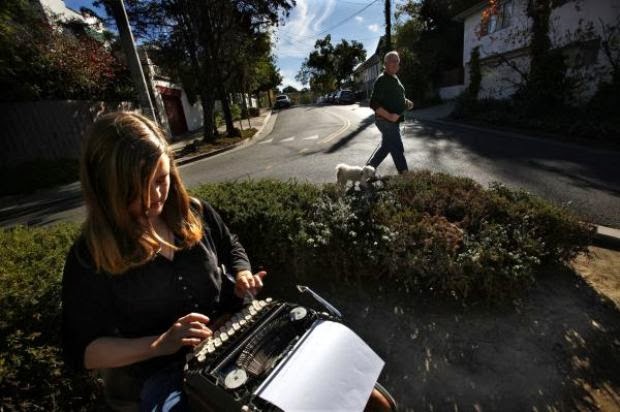 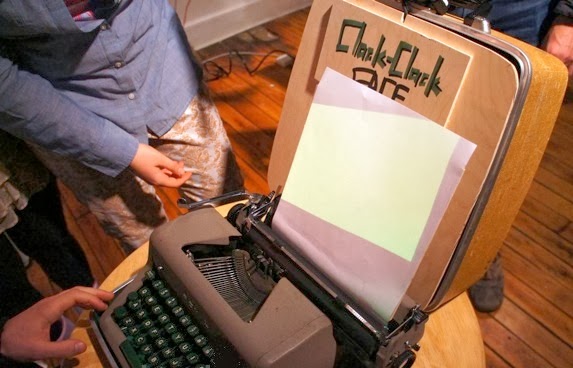 What's a Clack-Clack FACE typewriter?
TYPEWRITERS IN LAOS
Friend and former colleague Aaron Hall flew into Laos at the weekend after spending some time with ace young journalist Michael Ruffles in Bangkok. Aaron was quick to send me these images: 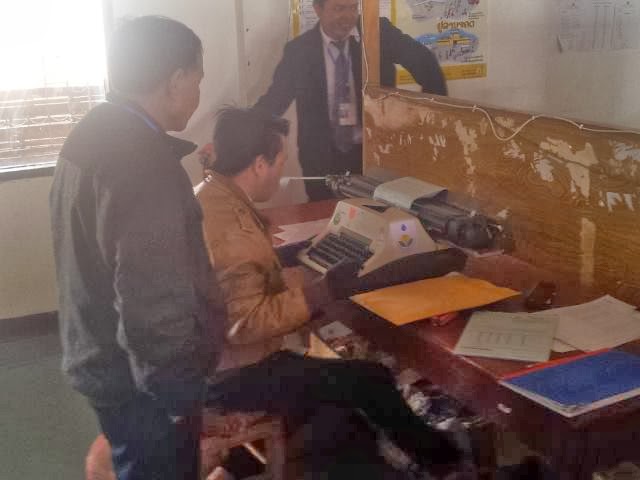 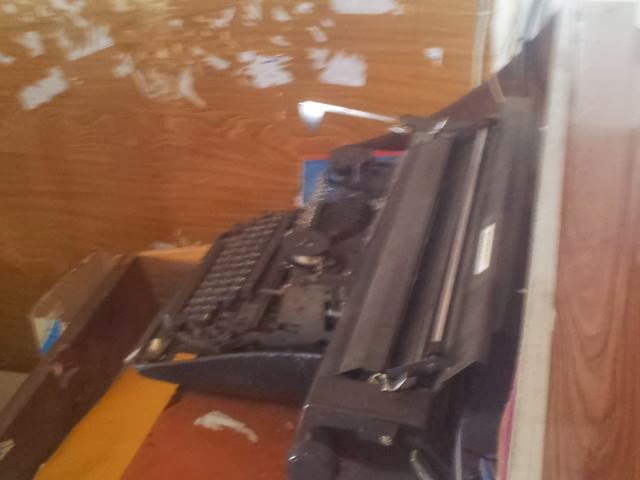 Aaron wrote, "Still in use at a regional Laos airport."
Another travelling friend, Peter Crossing, saw these typewriters last month in a museum at the Sunbury Plantation in Barbados: 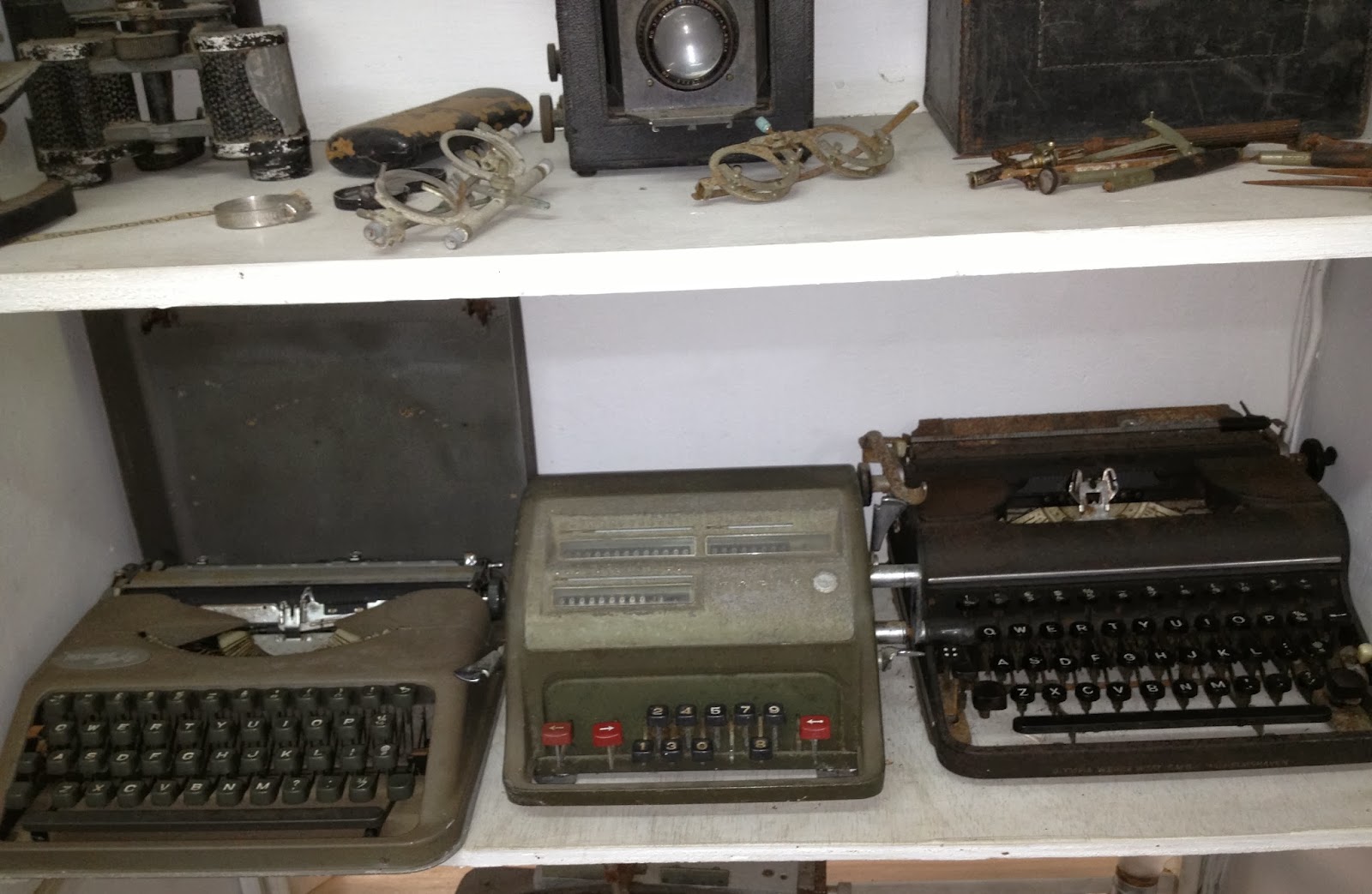 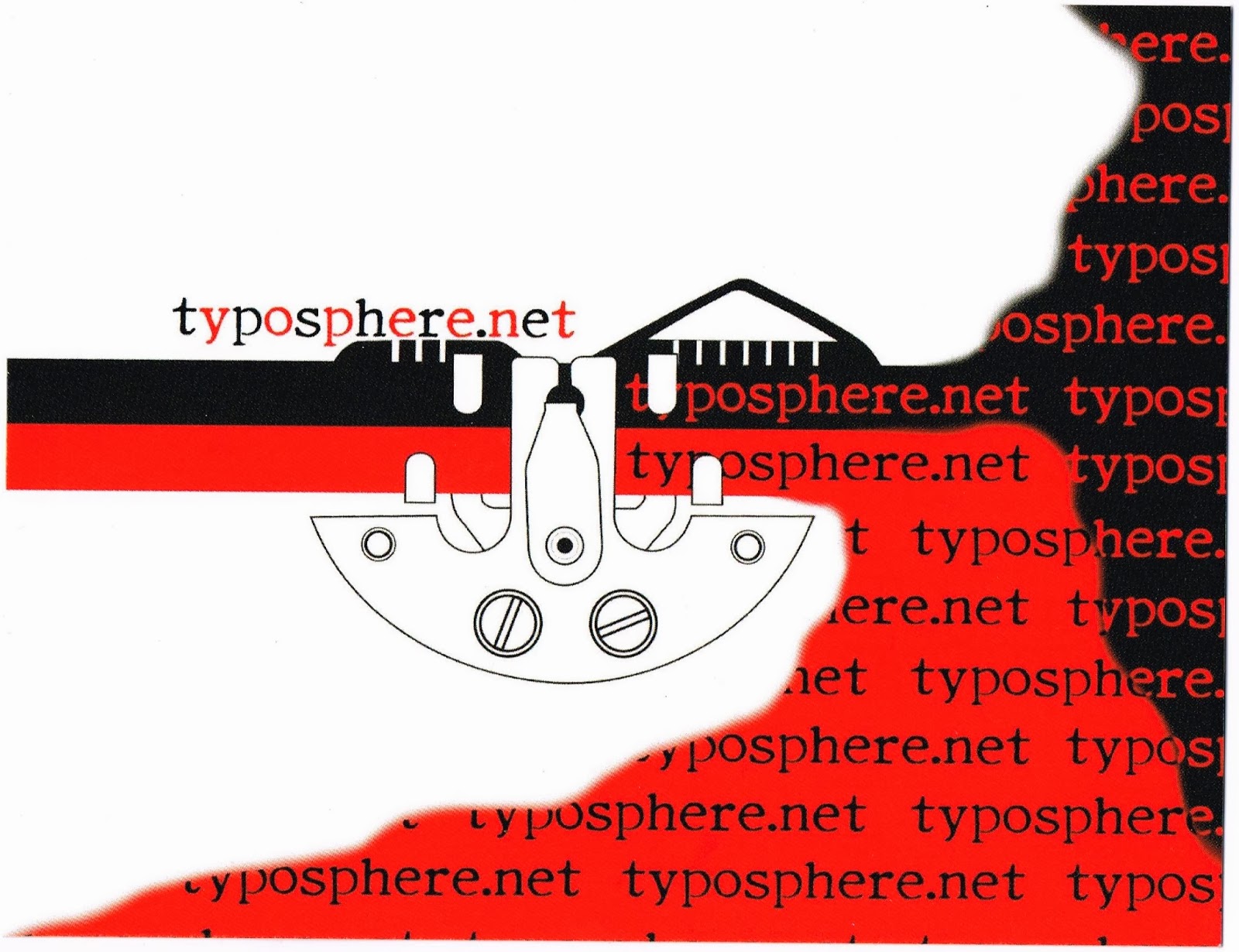 A huge thank-you to Richard Polt in Cincinnati and to Piotr Trumpiel in London for their cards sent over the Christmas period. Piotr kindly sent a set of six very nice typewriter-themed postcards. I promise I shall return the favour ... one day soon!

TYPEWRITER FRIEND OR FOE?
I received a request from Chinese blogger "Shane-Yeh Gerard" ("machopolitan") asking me to help introduce typewriter fans to his blog, "Typecasting in China". Gerard explained that "blogspot.com is totally blocked in China, therefore I'm using a special software called VPN to bypass restrictions. It doesn't always work."
Only nine days earlier, Gerard had called me a "Bad-mouthing, China-smearing son of ... bourgeoisie" over a perfectly innocuous post about Chinese-made typewriters. Umm. Is there is a language problem here?

THE AGE OF CONTEXT 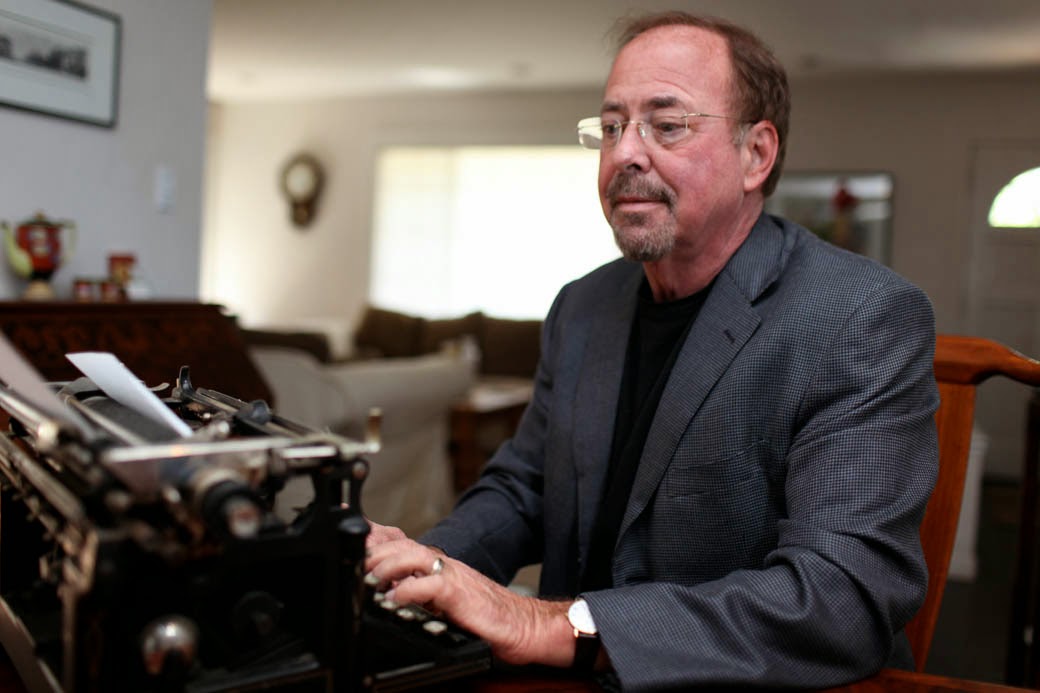 Shel Israel is a writer, consultant and speaker on issues related to social media and business communications. He is CEO of SI Associates and is based in the San Francisco Bay Area. He is best known as a storyteller and writer. He’s author of four books, including Twitterville published in 2009 and Naked Conversations: How Blogs are Changing the Way Businesses Talk with Customers. Written with Robert Scoble, Naked Conversations was listed by Amazon.com as one of the 10 best business books of 2006. Israel and Scoble have collaborated on a new book, The Age of Context: How it Changes your Work and Life. Israel also offers commentary on The Social Beat on Forbes.com and has previously contributed to BusinessWeek, Fast Company, Dow Jones and American Express OPEN Forum.
ENID BLYTON'S TYPEWRITER 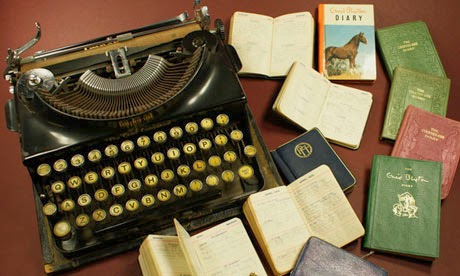 Enid Blyton's Imperial Good Companion portable typewriter and diaries were on display at the Seven Stories centre in Newcastle in England. 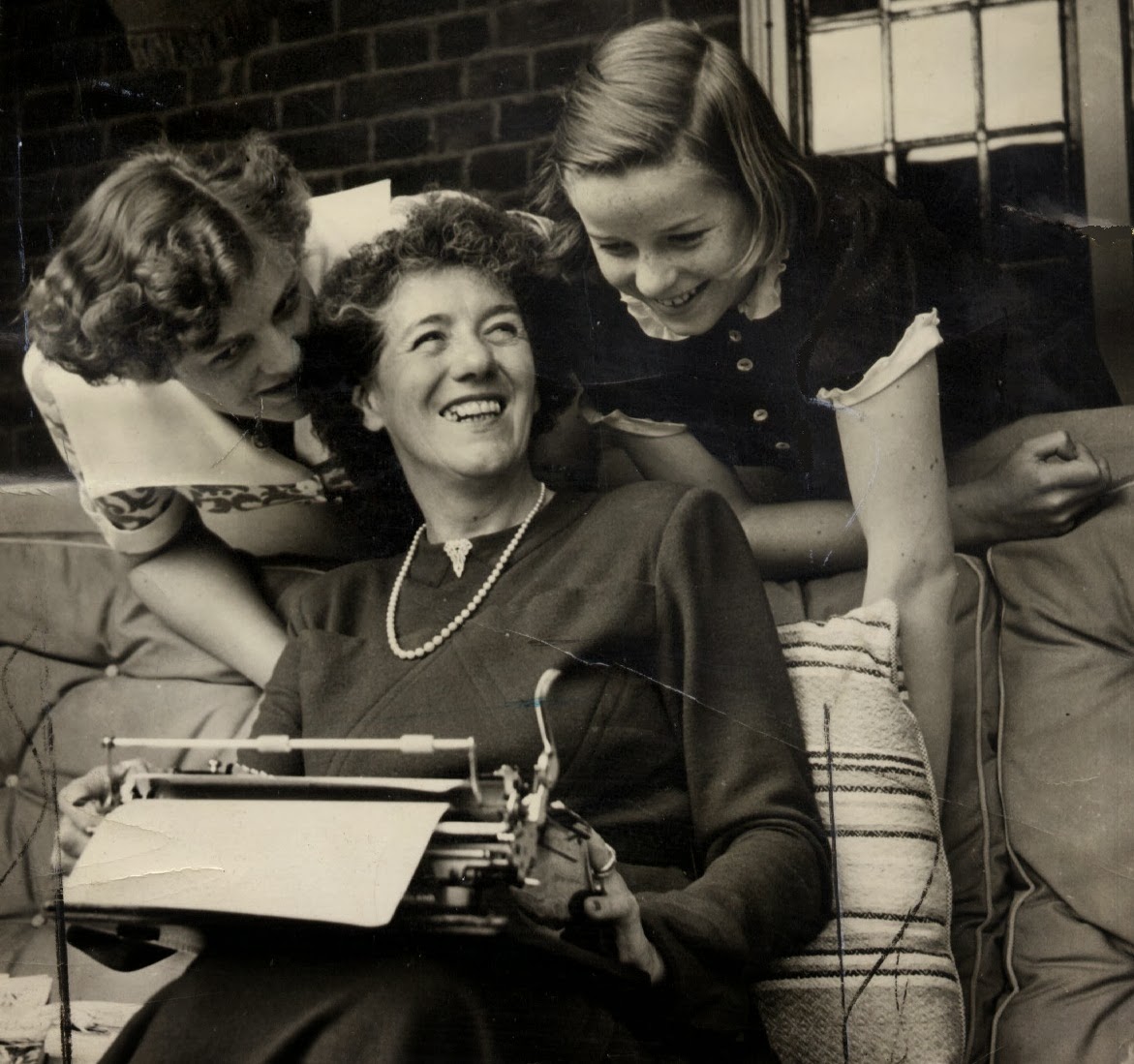 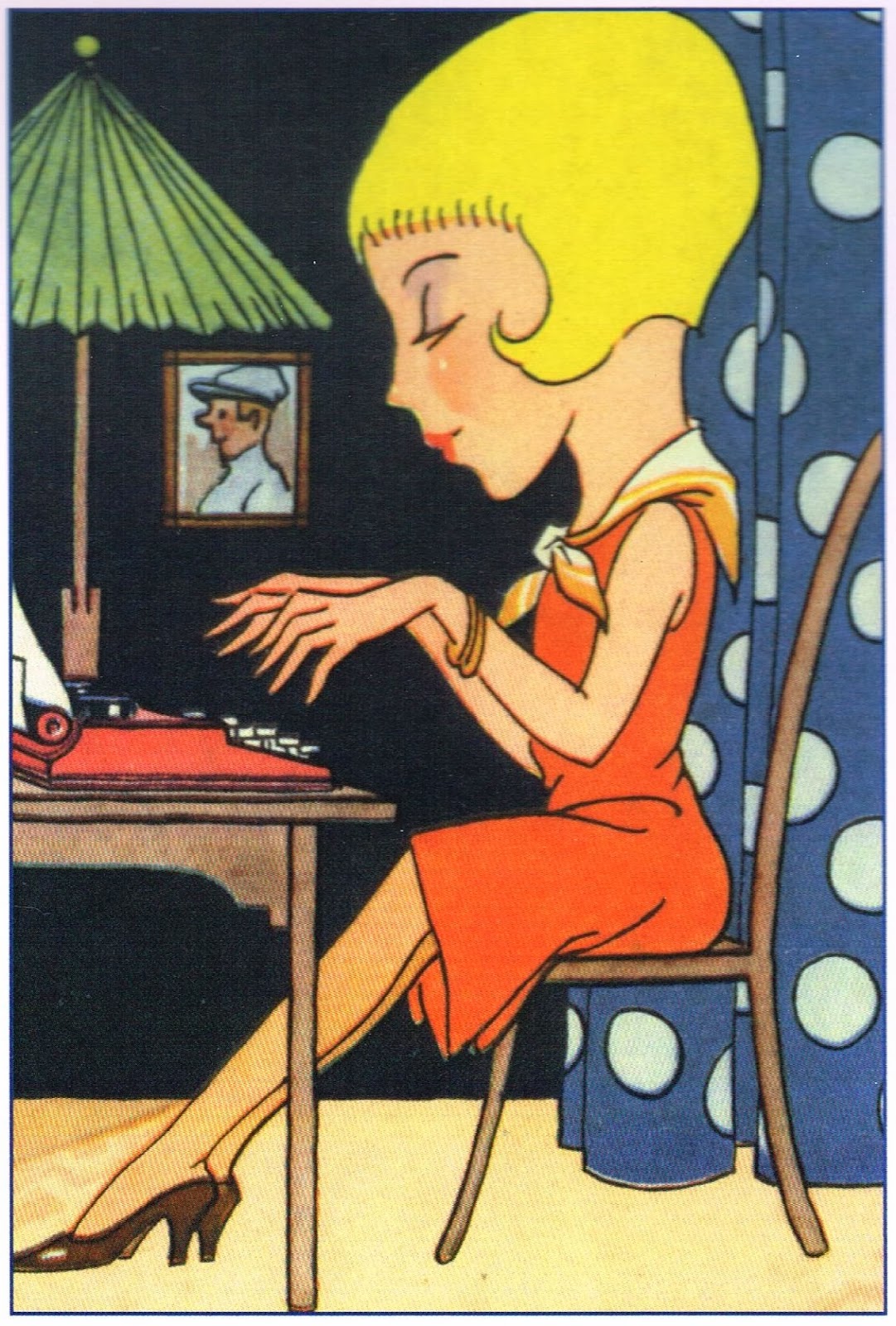 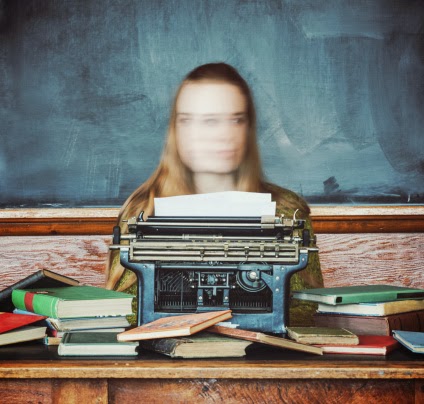 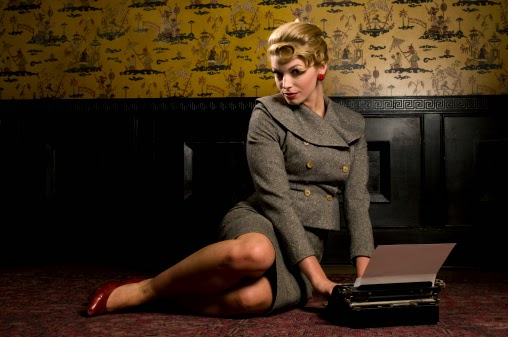 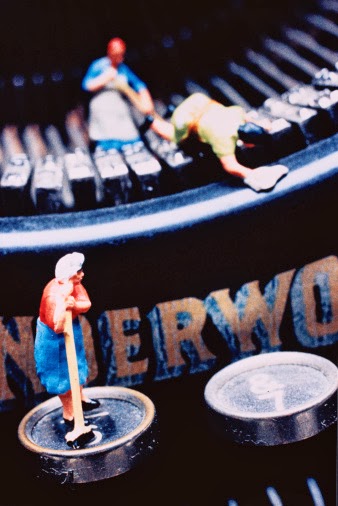 The little ladies who've been doing all the work around here lately.

I bet there are plenty of skeletons in Washington basements.

I've been to Laos and I'm surprised they're so advanced that they're using visible writers.

Varied and interesting post. I wonder if any of the Eggheads own a typewriter. I'd put my money on Chris. :)

A huge sorry from me.

There's some terrible misunderstanding between us. Please hear me explain:

When I said that son of a ...., it was supposed to be a sarcasm, or now I realized, a bad-taste humor.

What I wanted to say is these Chinese typewriters made after 2000 are arguably the worst machines ever built. I've even posted an article about my experience with one of these typewriters.

The following is a link:


However, if you ever said that,--- "the quality of Chinese typewriters are terrible"--- out loud in public in China, then you will encounter public criticism and even insult. You will be labelled as "just another arrogant westerner looking through China through color-lens and not without ulterior motive".

Such an indiscriminate accusation would be jaw-droppingly regarded as patriotism.

A case in point,in 2011 a private business owner from Zhejiang Province, a major manufacturing base in China, was sued in US for IP infringement. The court ordered him to pay a hefty sum of money to the patent holder and forever banned from the US market. Fearing that, in an Internet age, bad news would affect his business in China, the owner held a news conference as soon as he returned to China. However, he blatantly accused US of "wielding the weapon of trade protectionism" and that "US is afraid of a rising China" therefore"down with American imperialism". I, as a registered journalist, was at the press conference. I was aghast that the very next day, several major newspapers carried that story, with a wrong-doer sitting upright in a news photo.

Patriotism in China has been so overstretched to the detriment of sometimes hindering real progress. That's the heinous side of "face value" that we Chinese have long-cherished.

Thanks to growing western influence, a younger generation of Chinese, me included, prefer to call a spade a spade. I used that "son of a...."phrase to satirize the unique brand of Chinese hyprocrisy. Had you read into my original comment, you would find that I also satirized poisonous food and air among many other social ills that China is experiencing.

A lesson is learnt,Mr Robert Messenger, when engaging in cross-cultural communication, I should have realized that my sarcasm could be misunderstand.

Again please accept my heartfelt apology. Your regular feeds of typewriter-related knowledge shoots like a warm breeze (filled with smell of vegemite.) I feel like owe you a big favor for keeping me entertained day after day. There's no reason for me to insult you as such.

Great post Robert. Many things I did not know. I will check the Chinese fellows blog. Typospherians in my book are welcome no matter where they live. Too bad some countries block internet sites.

I just read his comment / reply. Very interesting. Somehow whenever I try to be humorous I end-up with foot-in-mouth so I can fully understand his statements of misunderstanding.