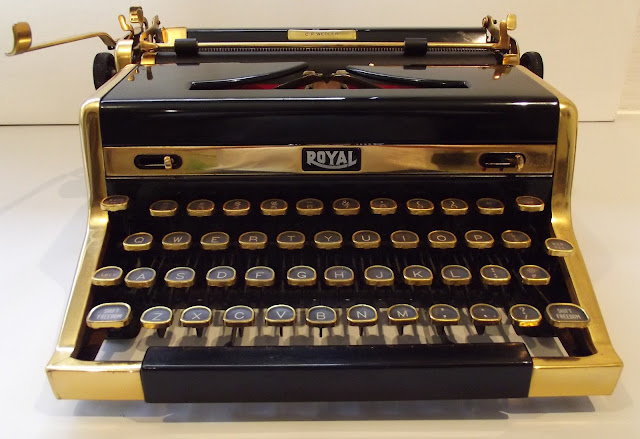 By a spooky but sheer coincidence, this image number is 007. I swear it's true!
How better to mark my 500th post than with my gold-plated Royal Quiet DeLuxe portable typewriter? I call it the “Goldfinger” typewriter. 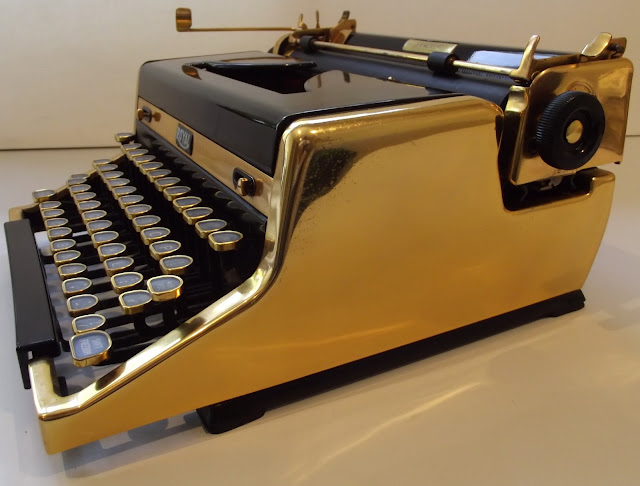 As many will know, just such a gold-plated Royal portable was the typewriter of choice of English author Ian Fleming, who had a fascination with things gold. 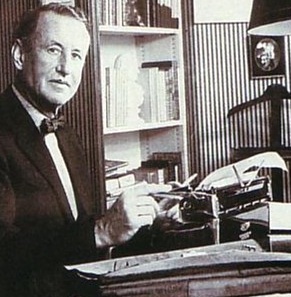 Fleming’s typewriter was used by him at his 14-acre Goldeneye estate at Oracabessa, St Mary, in north Jamaica, to create James Bond, Secret Agent 007, starting with the novel Casino Royale (1953). Fleming wrote Goldfinger on the Royal in 1959, and included a gold typewriter in that book. 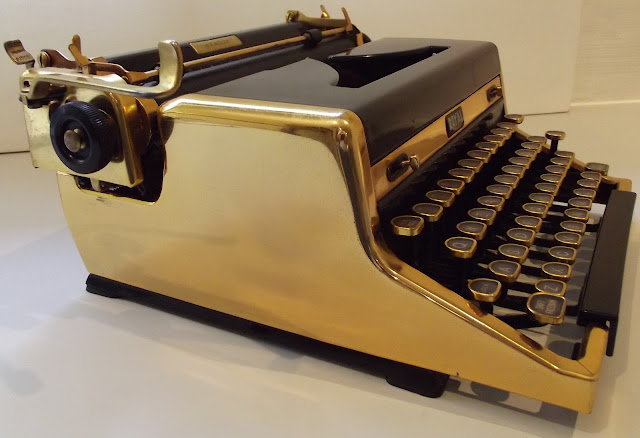 Fleming paid $US174 for his gold-plated Royal, which he received in the West Indies on January 15, 1952. It was a special issue to mark Royal’s 50th anniversary, its Golden Jubilee. It is an adaption of the 1945 re-design by the great Henry Dreyfuss. 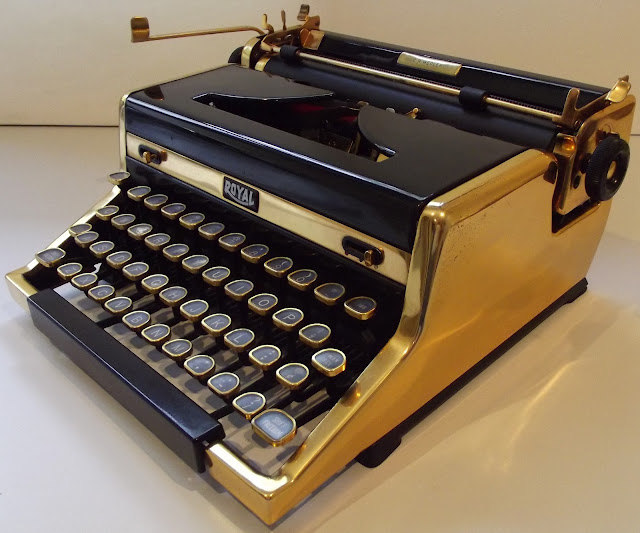 In 1943 Smithers was a British naval attaché in Mexico, tracking German U-Boat movements. He married, after a three-week courtship, Dojean Lane-Sayman, of St Louis, a divorced American heiress of part-Mexican ancestry who owned a gold typewriter. This is the machine which made a cameo appearance in Goldfinger. 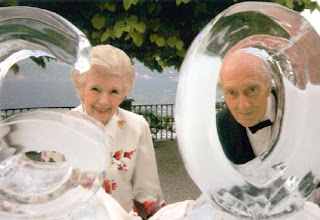 My gold-plated Royal typewriter was originally owned by Dr Carl Richard Wedler, of St Clair Hospital, Cleveland, Ohio, and was kept at his home at 4504 Superior Avenue, East Side Cleveland. 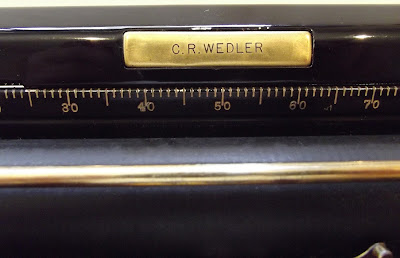 Dr Wedler was a leading member of the Germania Turverein Vorwaerts, a gymnastics movement affiliated to the American Turners, and had a fondness for Antonio Y Cleopatra cigars, made in Cayey, Puerto Rico, of Cuban-seed tobacco. 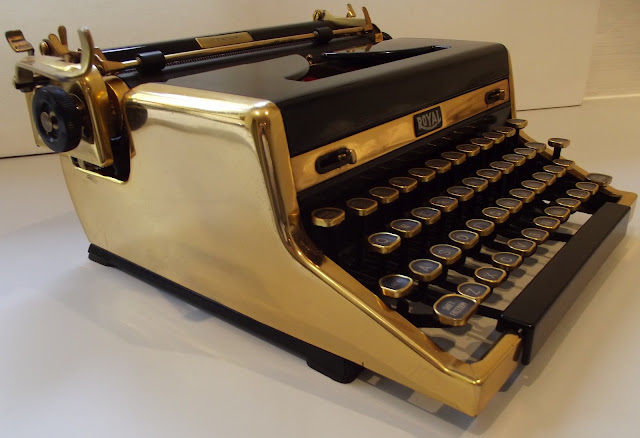 His grandson is Richard Wedler, the noted woodworker (he makes custom cabinets and furniture), inventor (founder of Micro Fence) and musician, who now lives in Southern California.

Before Richard turned to woodworking as a career, he toured the US opening concerts for such well known acts as Judy Collins (Amazing Grace), the legendary Josh White (House of the Rising Sun arranger) and Tom Rush (No Regrets) 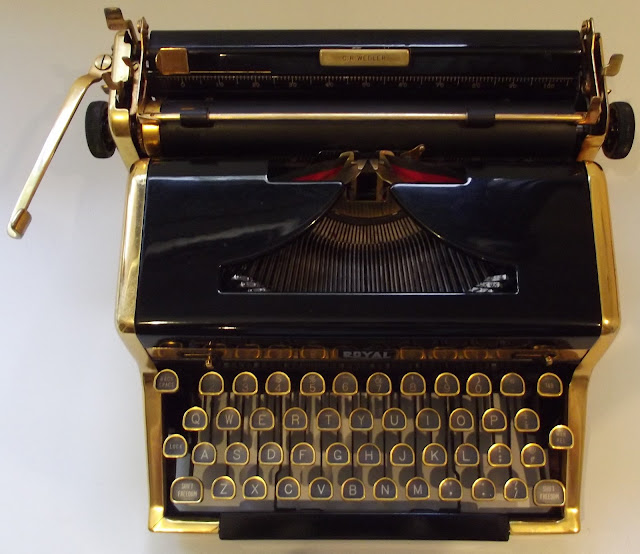 On May 5, 1995, Irish actor Pierce Brosnan, who played Bond, paid £56,250 after fierce bidding at an auction at Christie’s South Kensington rooms in London, for Fleming’s gold—plated Royal. 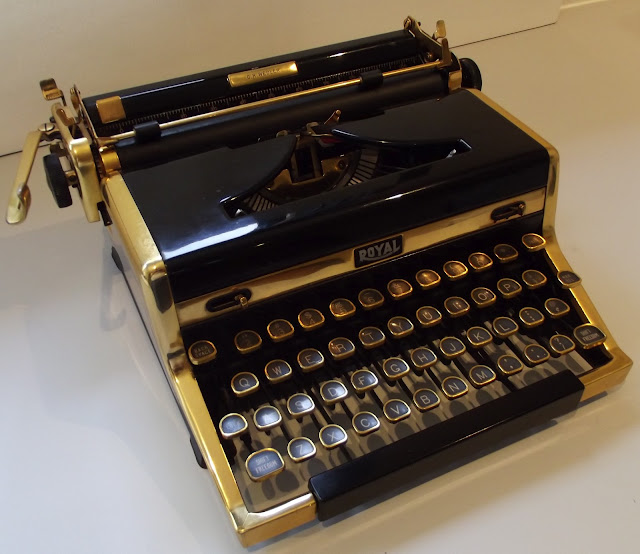 Until Cormac McCarthy’s Olivetti Lettera 32 fetched more than $200,000 in December 2009, Fleming’s Royal was the most expensive typewriter ever sold.
At another action at Christie’s of London, on November 1, 2006, a number of Fleming’s letters were sold, including one to his typist, Margaret Anderson, jokingly describing the gold-plated typewriter as a "beastly machine". 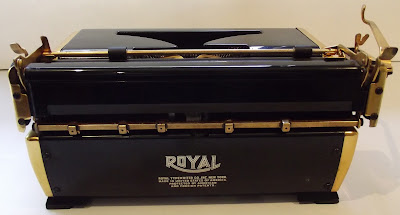 Posted by Robert Messenger at 16:03

Congratulations to your 500!!!! I learned speed-reading in order to keep up with your publishing speed. Ad multos, and all the best!

Very funny, Georg. I wish I could add speed researching to speed typing (and speed reading). As it is I spend a day researching and the only comments relate to whether the guy is dead in the picture! By the way. I like your new head shot, make you look very alive.

And thank you for your congrats.

As a life-long Bond fan, I never get sick of seeing pictures of these gold-plated Royals. Congrats on the big Five-Oh-Oh. Or rather, Double-O-Five. ;-)

I have a friend who lives a bit south of me who would love machine 007, (even though he is not a typosphereian) James Bond. Yes this is a real person who is about 10 years older than me. He is a Laser Engineer. I worked with him since the 1980s and his real name is what I stated he was born before any of the movies were released. When we first met I asked him if he owned the trademark and got royalties.

Congratulations on this 500th installment of your golden words.

Gulp! 500. Mind boggling. Congratulations. You know, with all this silver surfing going on, it is a but a small step to gold plating.

I have one of these Royal Gold Typewriters that was my Dads that is in great condition other than the gold is really worn since my Dad used it a lot. I am not a collector but I have wanted to have the plating redone on it just so I could display it. I have the one that is exactly like the one that Ian Fleming had. Has anyone ever had one replated? Looks like I might be able to remove it all to be replated. By the way, I do have a 1953 letter on Royal Typewriter letterhead that is "typed" answering a question about getting one of these typewriters with a different font. I guess my Dad was able to get it with an Italic font since that is what he has. I may have the only one like that. If anyone is interested in a copy of the letter just ask and I will email you a high resolution file to print. Cary.Mark@me.com.

Hello Robert, I just happen to find this blogpost via Google search. I really do enjoy reading your blog and I was shocked to find out that you were one of the previous owners of the C.R. Wedler Goldfinger typewriter. Currently this typewriter is in Singapore.