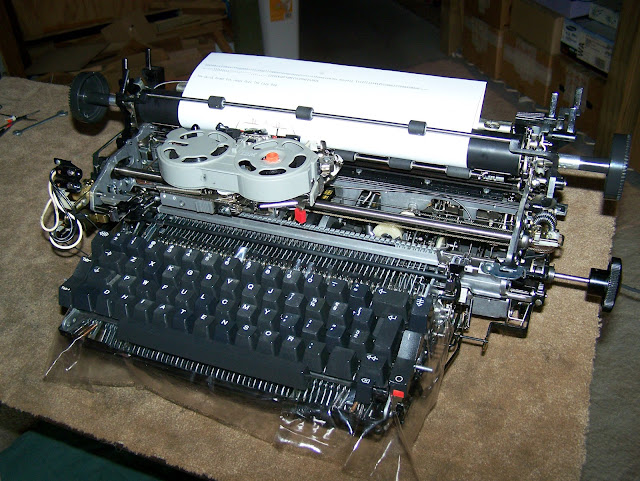 My very clever friend Peter Brill, of Perth, Western Australia, has finally succeeded in converting an IBM Selectric III electric typewriter from a QWERTY to a Blickensderfer DHIATENSOR keyboard.
Peter has been working off-and-on with this project for about 15 months now. 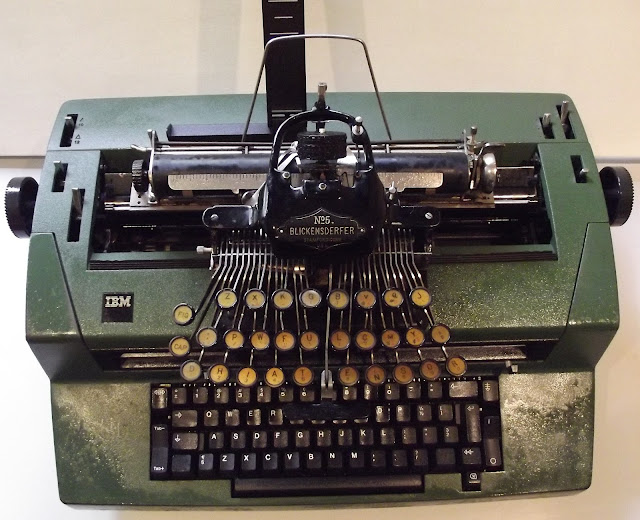 I should explain that the images of the Selectric-DHIATENSOR conversion work in progress were taken by Peter Brill himself, in his own Perth workshop. Those images of the Blick 5 sitting atop the Selectric are taken with machines from among my own collection. It seemed like a good idea at the time.
The Blick keyboard Selectric will, hopefully, be part of my typewriter exhibition at the Canberra Museum and Gallery from July until September, and if we can work it out, it will be available for public "testing". 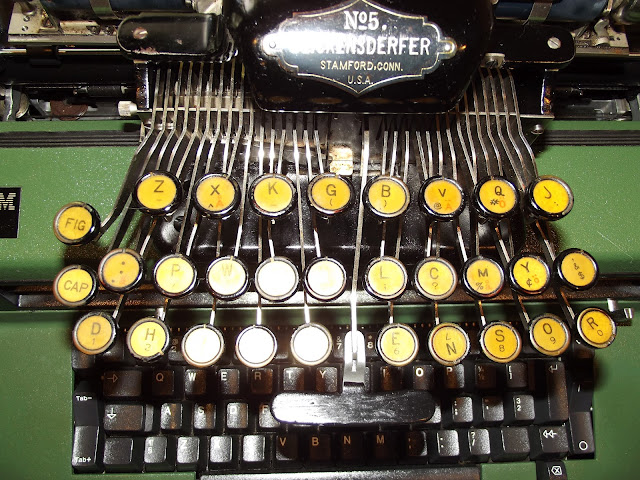 Peter is a trained typewriter technician who worked with IBM toward the end of his typewriter career. In later life, he began collecting old manual portable typewriters and developed a fascination with the Blickensderfer. So much so, he came to wonder whether George Canfield Blickensderfer had been right all along, and that the DHIATENSOR keyboard was, as Blickensderfer had argued back in the late 1880s, a superior configuration to the then "Universal" QWERTY. These pages, explaining the preference for the  DHIATENSOR configuration, are from the Blick handbook: 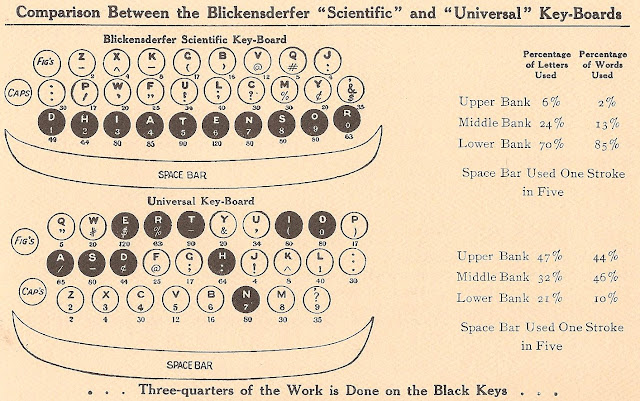 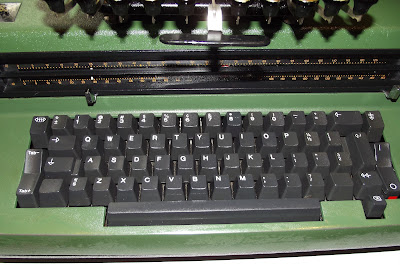 Thus Peter set out with an idea to test this theory through  converting the Selectric to DHIATENSOR. 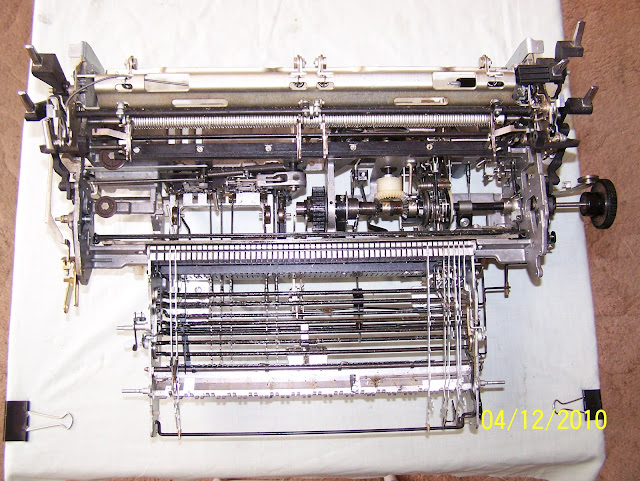 Peter emailed me in early December 2010 saying, "My latest project is to convert an IBM Selectric III to a DHIATENSOR keyboard. As you can see by the pic attached that it is quite a savage modification. I have never stripped a machine down this much all at once and with the intent of getting it going again. The spring bias was broken, which is a common fault with the Selectric III, a cheaper plastic one was used. I have never changed one on the Selectric I and only a few on the Selectric II but hundreds on the III. Therefore the print carrier was removed for ease and also the main cycle clutch was removed whilst it was in this state.
"The state of the machine was near perfect, one of the last models which had the ribbon carriers incorporated as part of the ribbon cartridge. But with most of these machines the oil and grease has turned into glue, completely gumming up the machine, thus a submerged washout is in store for her.

"I think people would like to try to use a DHIATENSOR keyboard but I don't want them hammering away on one of my prize Blickensderfers. Also, the Blicks are different to type on as they are slow and people are mostly used to computer keyboards which are not at all like typing on a real typewriter."
In May last year, Peter let Richard Polt know about the conversion. "I had this great (daft?) idea of converting an IBM Selectric III into a DHIATENSOR machine so people can try out the 'Scientific' keyboard using a machine that they would be familiar with rather that trying a real Blickensderfer."
I think Peter's Selectric-Blick machine will create a lot of fun for people attending my exhibition and being able to further "test" his theory. 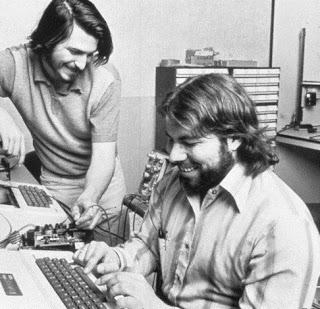 In the meantime, Peter's achievement has made me wonder about the late Steve Jobs and Steve Wozniak when they built the first Apple computers in 1976. 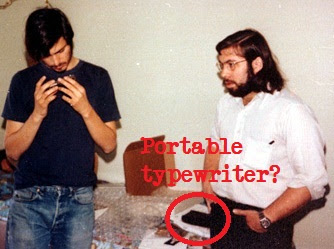 My understanding is that Wozniak, who had the idea of combining a typewriter with a TV set, first used an IBM Selectric keyboard when he began building the prototype of the original Apple. 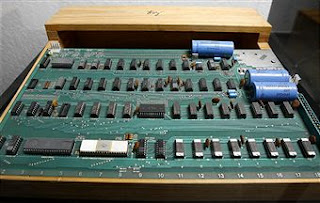 I may be wrong about that, and can find no reference to it.
However, it's an absolutely delicious thought that Wozniak, back then, might have had the same idea as Peter Brill did 34 years later. 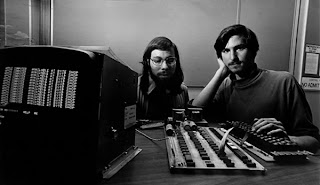 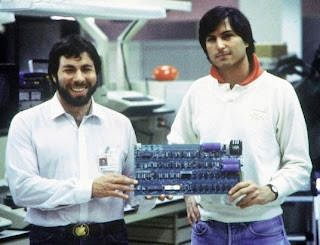 Imagine, we'd all be using DHIATENSOR keyboards on computers today! 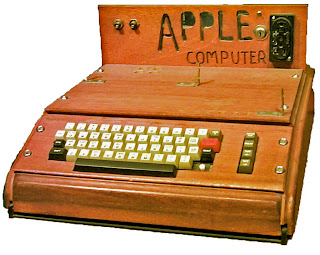 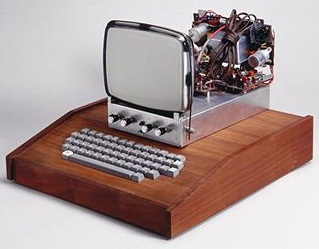 In 1976, Wozniak supplied for sale computer "kits" for $666.66. The buyer received a blank printed circuit board, a kit of parts and 16 pages of instructions. To make a computer, the buyer needed to add a power supply, keyboard and display. 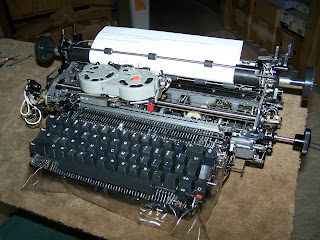 Below, technicians computer test Selectrics as they roll off the IBM assembly line: What an achievement, Peter! George C. Blickensderfer would be proud.

Now to create a fancy name with the combination of IBM Selectric and Blickensderfer. That conversion is quite interesting.

Hello- I am trying to track down an IBM selectric typewriter (or several!)- I thought you would be the best place to start! I am in sydney - but am happy to collect from anywhere reasonably close.. (ie- Canberra is ok!) Could you let me know?

Oh Robert! How do you do it? Just where did you get that amazing photo of the IBM Assembly? I would dearly love to see more and video footage would be better than moon rocks, which I have seen.

Oh Robert! How do you do it? Just where did you get that amazing photo of the IBM Assembly? I would dearly love to see more and video footage would be better than moon rocks, which I have seen.