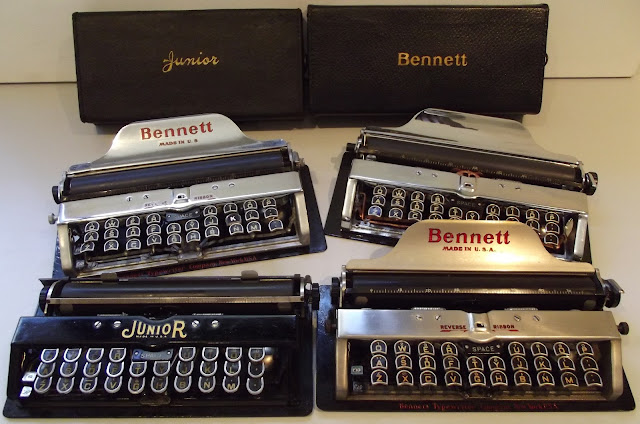 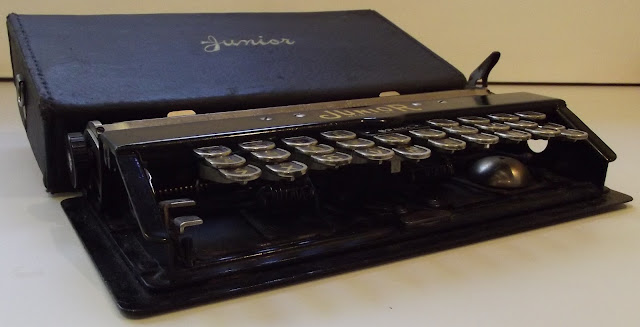 Yesterday Rowan Henderson, the charming curator in charge of my typewriter exhibition at the Canberra Museum and Gallery from July to September, contacted me about an “Eloquent Page” which had appeared on the National Library of Australia’s website.
The article in question was titled “Typing tidbits – big, small and mobile”. It might have been eloquently put together by Julie Whiting, but it wasn’t too eloquent with the facts. 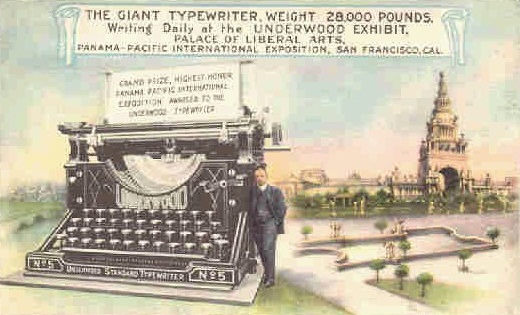 Julie wrote, “Keyboards are so ubiquitous now that we take them for granted and sometimes forget what a newsworthy and amazing device they could be back in the late 18th and early 19th centuries. Can you imagine the astonishment of the crowds at the Panama-Pacific Exhibition in 1915 when confronted by the sight of an Underwood 14-ton typewriter that was 21 feet wide and 15 feet high? 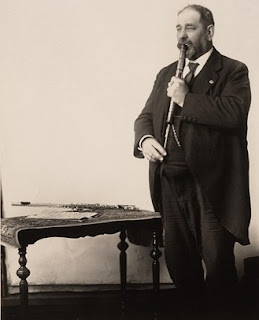 “Then to the other extreme – don’t think that miniature keyboards on your smart phone are a recent invention. As reported on 17 April, 1923, Dr H.E. Wetherill (above) demonstrated his typewriter that weighed just one ounce, fitted neatly into his waistcoat pocket and on which he was able to type 17 words per minute. Not bad!”
“Not bad” indeed. Except it’s not true. First, it didn’t have a miniature keyboard. Second, it wasn’t a typewriter. 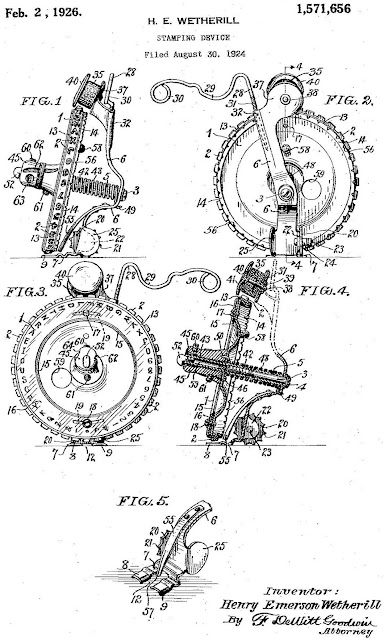 What Henry Emerson Wetherill, of Phoenixville, Pennsylvania, actually patented on February 2, 1926, was a stamping device, not a typewriter. And I doubt if even that was new - hadn't Robert Ingersoll invented something like this (below) about 40 years earlier? 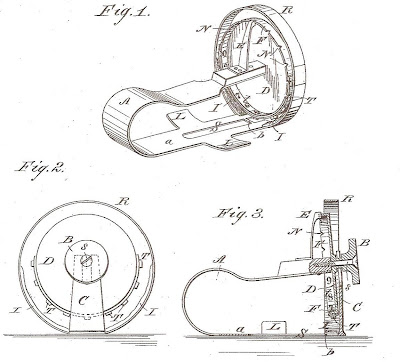 Wetherill had applied for the patent on August 30, 1924, but had obviously been spruiking it long before then, because the article to which Julie referred appeared on the front page of the Northern Standard in Darwin, the Northern Territory, on April 17, 1923. 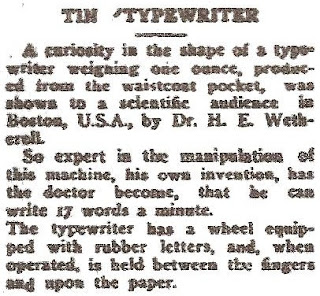 I suspect the headline is supposed to be "Tiny Typewriter", not "Tin Typewriter"
That small news item reads, “A curiosity in the shape of a typewriter weighing one ounce, produced from the waistcoat pocket, was shown to a scientific audience in Boston, USA, by Dr H.E.Wetherell (sic).
“So expert in the manipulation of this machine, his own invention, has the doctor become, that he can write 17 words a minute.
“The typewriter has a wheel equipped with rubber letters, and, when operated, is held-between the fingers and upon the paper.” 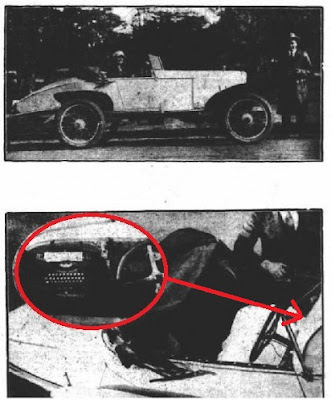 Julie Whiting’s “Eloquent Page” story goes on with a piece about a 1926 Chevrolet with a typewriter desk (above). She wrote:
“Think that glove boxes designed with an iPad in mind, and working while on the move are new ideas? Not at all. Back in 1926, Mr Ivan H. Parker showed off his specially designed new car that boasted everything the businessman on the move might want. It included special arrangements for sleeping accommodation for the driver, plus a removable table fitted to the dashboard that could be used as a typing desk, and small compartments with sliding panels behind the dash to hold any necessary equipment {or] supplies. Utility and appearance combined."
This was probably the way it worked: 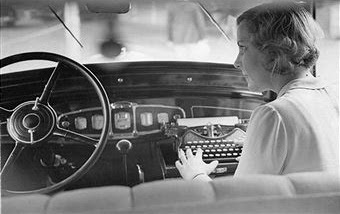 Julie’s page can be seen at http://blogs.nla.gov.au/the-eloquent-page/2012/02/20/typing-tidbits-big-small-and-mobile/ 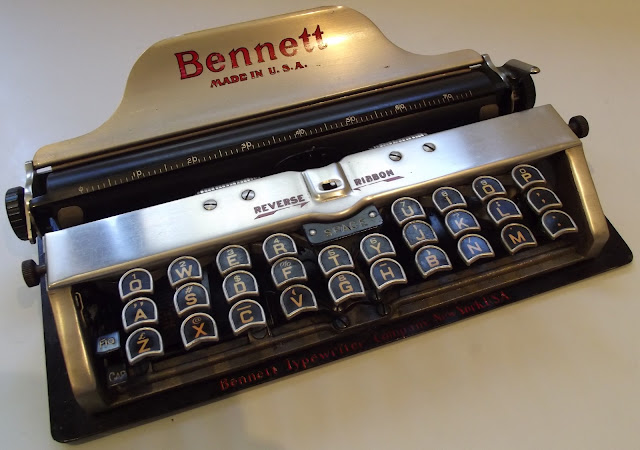 The best contrast I can think to make with the giant 1915 Underwood 5 is a full keyboard typewriter made a few years earlier: the Bennett. This is generally accepted as having the smallest keyboard on any typewriter ever made. 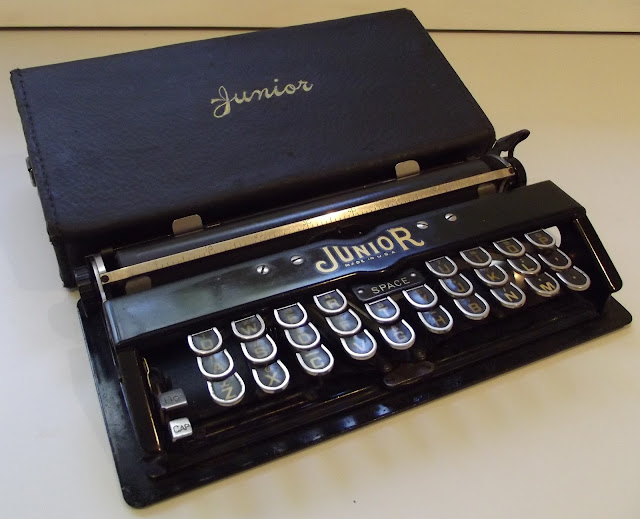 The Bennett started life as the Junior in 1907 and, with the addition of a gleaming paperplate and two ribbon spools, became the Bennett in 1910. The Junior used inking rollers, which can be seen below in front of the typewheel. 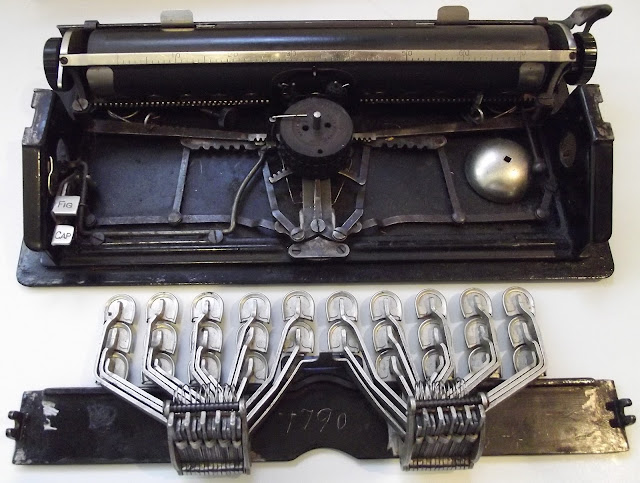 These marvellous typewriters were invented by Charles Almon Bennett, who was born in Bennington, Vermont, in April 1850. The son of a machinist, Bennett worked as a postmaster, a stationery merchant and, late in life, as a storekeeper for the US Army’s Picatinny Arsenal in Morris County, New Jersey. He lived nearby in Dover. 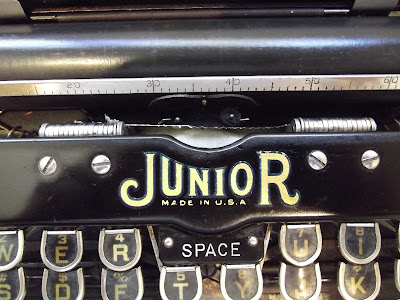 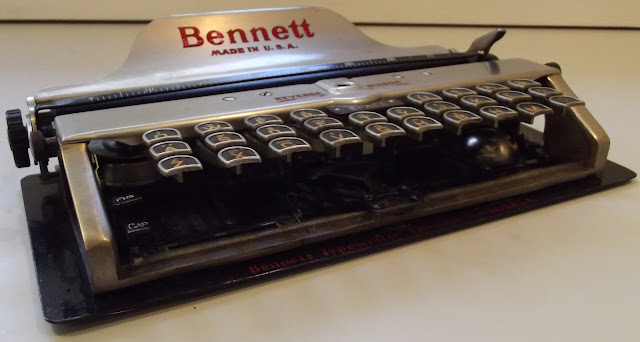 All the while he was a constant inventor, coming up with a vast array of things from spoons to typewriters, desk covers to car awning ventilators and a internal combustion engine. 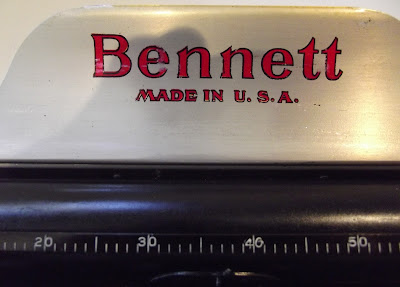 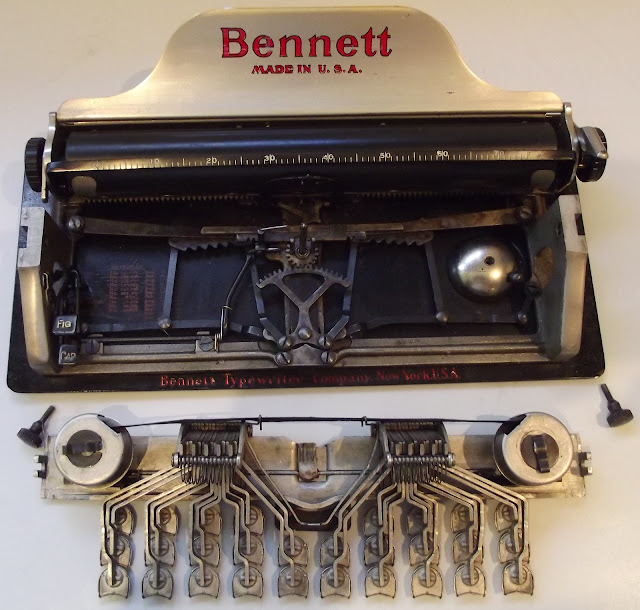 The Bennett typewriter deserved far more success than it enjoyed. My understanding is that the little filaments which lifted the typewheel for capitals and figures let the inventor done. Otherwise, it worked fine:
You can see from his original patent, applied for on October 25, 1899, and granted on March 26, 1901, that Bennett had envisaged his little machine almost exactly the way it was to be produced some six years later. 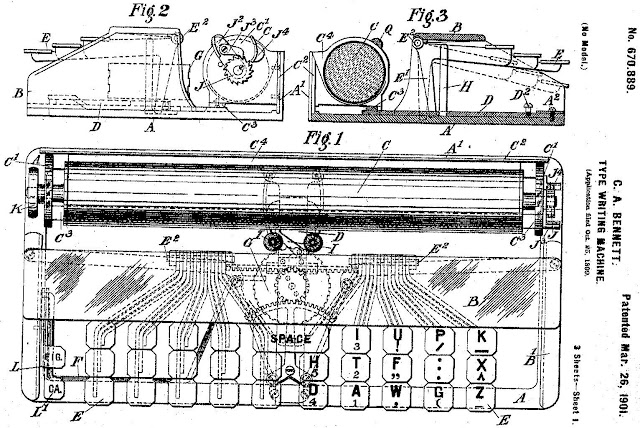 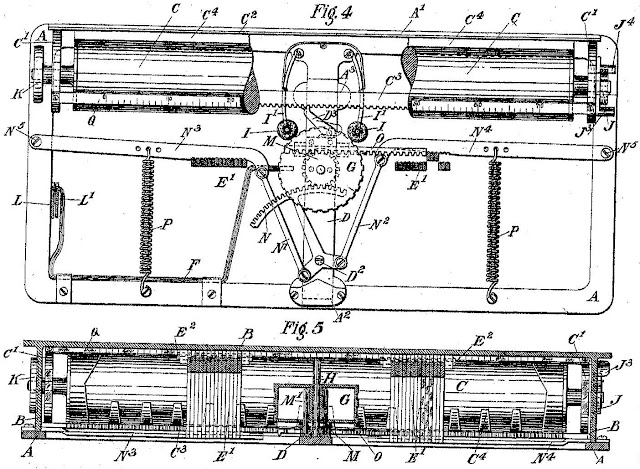 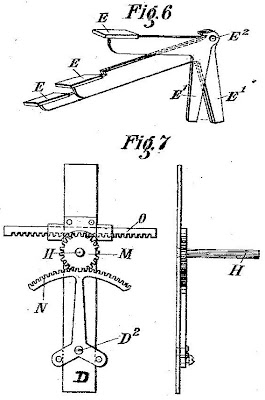 However, in April 1905, conscious of the problem with aligning the lower-case letters, capitals and figures, Bennett patented an improved typewheel alignment. 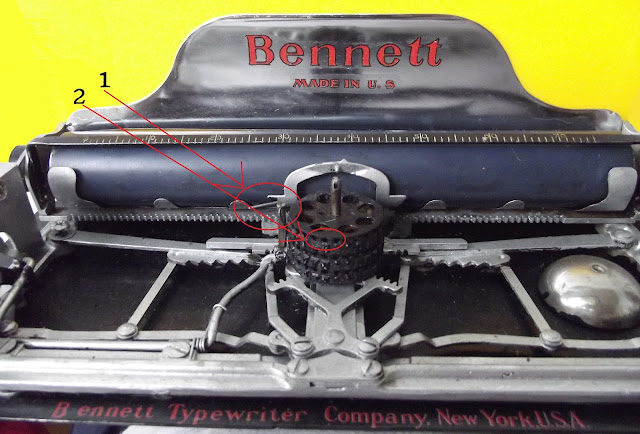 A comparison of typewheels used by, from left, the Bennett, the IBM Selectric (golfball) and the Blickensderfer.
Bennett's improvement seems not to have worked, for the frustrations buyers apparently felt over the alignment problem with the little machines must have put others off investing in them. 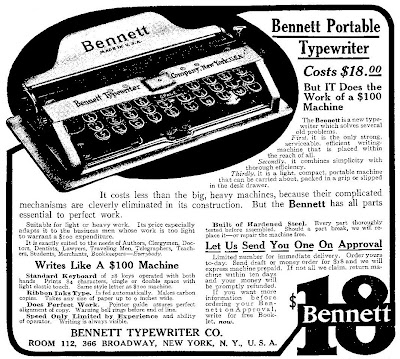 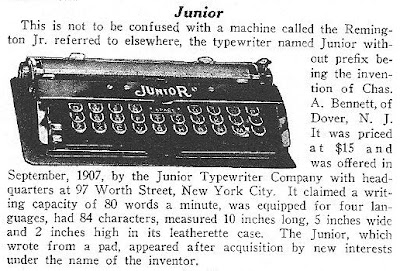 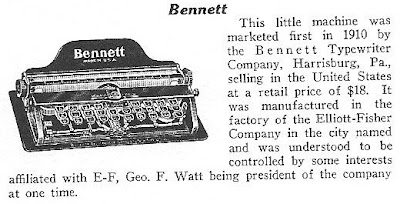 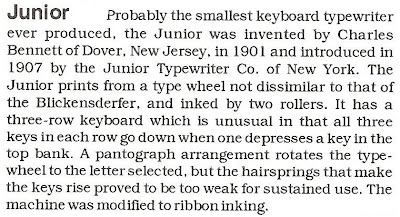 Still, the Junior and the Bennett are remarkable design and engineering achievements, and these little beauties are highly treasured by typewriter collectors around the world. 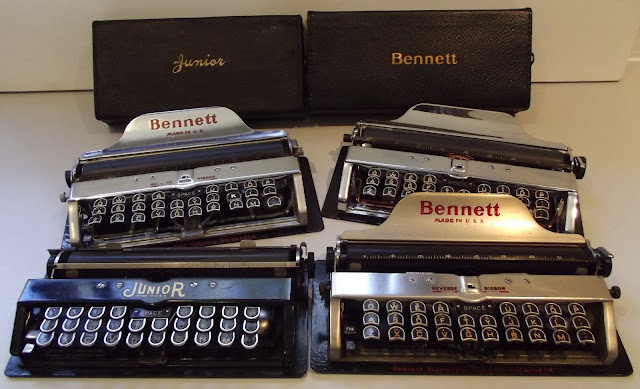 The Junior and the Bennett shown above are my working but display-only models. Below are two more Bennetts, both chromed, which I use for demonstration purposes.  The Bennett is very easy to take completely apart and put back together again, and invariably audiences are hugely impressed by the mechanical design under the top plate, which I have highlighted. The Bennett also came in black, and this model was sold by Scott McNeill of the Vintage Typewriter Shoppe for $395. 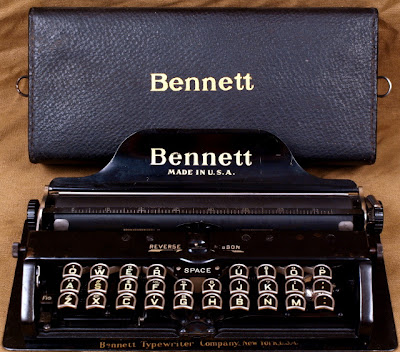 These little typewriters are marvels of miniaturization and a reminder that small keyboards and machines belong to the ingenuity of man, not the age of silicon.

I have finally been figuring out the workings of my Bennett. The diagram you show here is incorrect: the typewheel is lifted by an arm underneath it which is quite strong; the thin wire on top is just to keep the typewheel in place on its shaft. The top row of holes in the typewheel is used for alignment when typing figures. Alignment is quite good as long as the machine is adjusted properly, and I learned from a post on Facebook that there are 2 eccentric adjustments on either side that can ensure that the holes in the typewheel line up with the alignment peg.