Australia's Biggest Typewriter Seller: From Zercho's to Chartres and Stott's 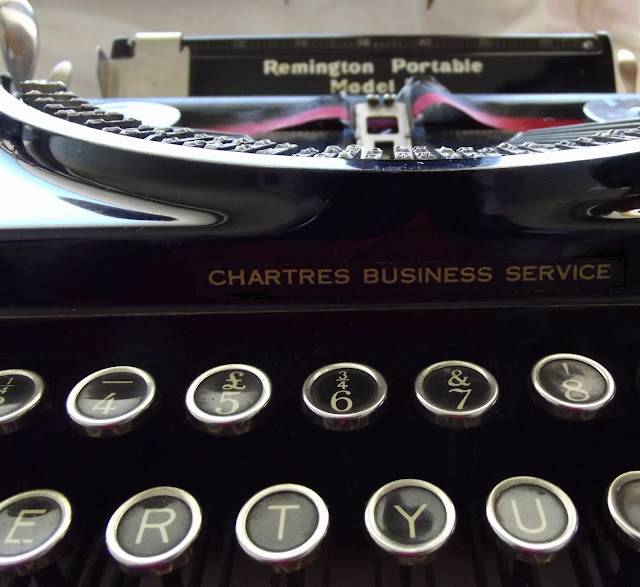 The names Chartres and Remington are so closely associated with typewriters in Australia that people here selling old Remington typewriters often refer to them as Chartres Remingtons.
They are Remingtons, but the Chartres Business Services decal on the front on them (and this includes the Rem-Blick below from the MuseumVictoria collection) might give the impression Chartres had something to do with making them. Chartres merely imported and sold them around the country. 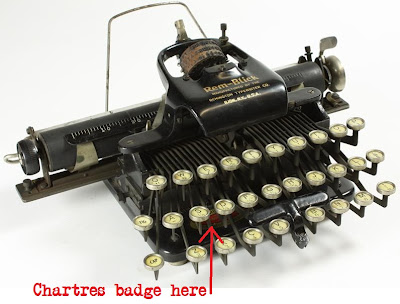 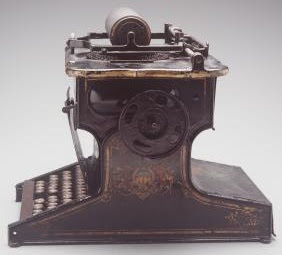 Chartres also sold Remington typewriter ribbons under its own name. 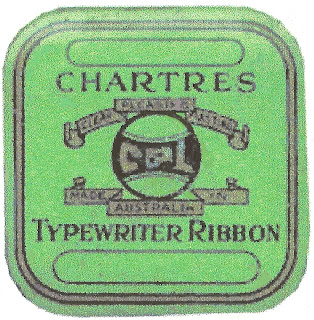 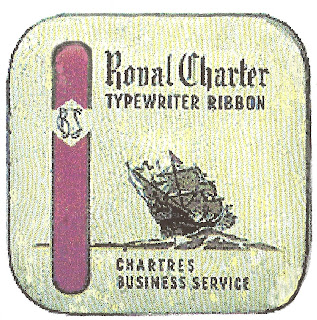 Two examples from ETCetera, No 42, March 1998
Thus the name Chartres still has a presence, at least among Australian typewriter and typewriter ephemera collectors.
But its presence is also still felt in other areas, of which the typewriter collectors may not be aware.

For instance, Chartres continues to operate, in a sense, through the worldwide franking machine company Pitney Bowes.
The Australian subsidiary of Pitney Bowes, with six branches across the country, is proud to state that its history “can be traced to 1891, when Remington typewriters were distributed by our corporate predecessor, Chartres Ltd."
The fact is, Remington and Chartres did not link up until 1909, when Chartres took over Zercho's Business Colleges in Melbourne and other parts of Australia. Before that, Remington's Australian agency was Stott and Hoare. Nonetheless, Pitney Bowes' claim can be said to be true: Stott (which became Stott and Underwood in 1910) did finish up owning Chartres, in 1968. But more of that later.
On its website, Pitney Bowes says, "[Chartres] in turn became Remington Ltd, Remington Pitney Bowes and finally, Pitney Bowes Australia Pty Ltd.
“The first Pitney Bowes meters entered the Australian market in 1930, when the company was represented … by the legendary Remington Company.
“This association lasted for many years before Pitney Bowes established its presence in Australia under its own name in 1987." 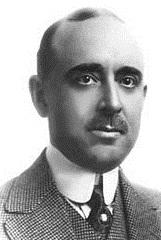 Arthur Pitney (above), of Chicago, formed the Pitney Postal Machine Company in 1902 and in 1920 joined forces with English-born Walter Harold Bowes (below), owner of the Universal Stamping Machine Company, to establish the Pitney Bowes Postage Meter Company. The combined operation allowed the US Government to collect $4.4 million on postage in its first two years. It has since evolved into the global leader in mailing equipment and describes itself as a “leading provider for software, hardware and services that integrate physical and digital communications channels”. Its 2010 revenue was $5.4 billion.

Interestingly, the world headquarters of Pitney Bowes is in Stamford, Connecticut, home of the Blickensderfer typewriter. Bowes moved his operations to Stamford in 1917, the year George Canfield Blickensderfer died and his company began to go into rapid decline.
Until now, very little has been known about the origins of Chartres Business Services. But its sudden emergence in the early part of the 20th century as one of Australia’s leading typewriter suppliers can now be explained. 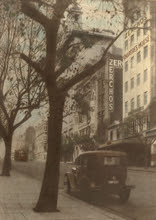 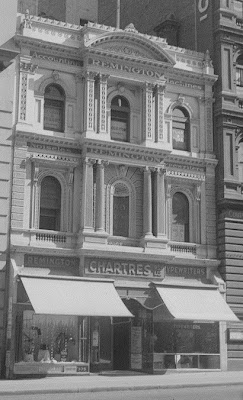 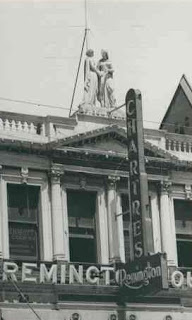 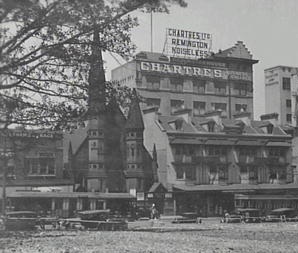 Sydney
We still don’t know anything about members of the Chartres family, but we do know their office equipment supply company started in 1909, when it gained control of the very well-established Zercho's Business Colleges.
Frederick William Zercho was born on August 16, 1867, at Barkers Creek, Victoria, the son of a Saxon migrant, Henry Zercho, a stonemason.
At 14 Frederick began an apprenticeship at Thompson's engineering works, Castlemaine; he later qualified as a licensed shorthand writer, winning distinction at the Melbourne law courts examination. In 1895 he became manager of Stott and Hoare's Business College in Melbourne, where he taught shorthand, typing, book-keeping and English.
Stott and Hoare were in 1910 to meet the challenge of the emergence of Chartres by joining forces with Underwood, becoming Stott and Underwood and the major 20th century competitor with Chartres in the sale of typewriters around Australia. 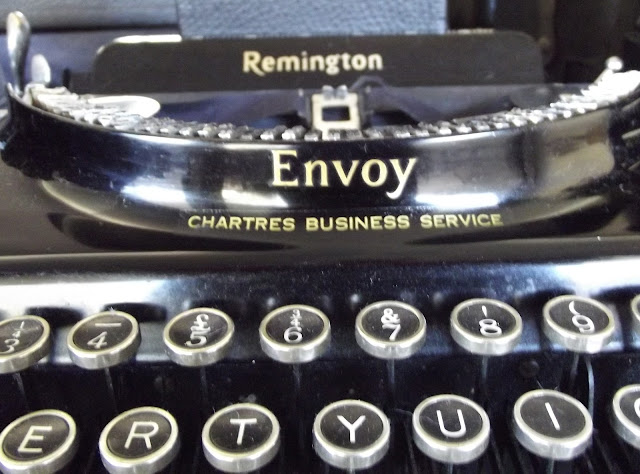 In 1896 Frederick Zercho joined the United Typewriter Company as head teacher at its Central Business College, which topped the Melbourne law courts' shorthand examination in 1896-1902.
In 1906 Zercho resigned from the college and, with his former assistant Andrew MacDougall as co-proprietor, set up Zercho's Business College, first in Flinders Street and from 1911 at 144 Collins Street. It became the largest business college in Australia.
MacDougall sold out in 1909 to the Chartres family, who took up a majority interest in the college. MacDougall went on to establish his own major office supply company (not to be confused with Sands & McDougall, another national office equipment supply company, now part of Corporate Express). Andrew MacDougall's company also sold typewriters and marketed typewriter ribbons.

But it did not prove to be in quite the same league as Chartres or Stott.
After 1909, Zercho retained shares and the position of headmaster, while becoming a director of Chartres Pty Ltd.
With Remington funding behind it, and in fierce competition with Underwood, Chartres grew and expanded rapidly. In order to maintain sales and overcome import duties, Remington established a factory in Sydney in 1930, where typewriters were assembled.
The outbreak of war in 1939 stopped the importation of typewriter parts and new typewriters, and the Chartres typewriter business naturally went downhill.
However, it continued on as an office equipment supplier, with links to Remington as well as other typewriter makers, into the early 1950s. During this period, the emphasis was on refurbishing typewriters, as the resumption of the importation of new typewriters into Australia was slow after the war. The priorities were more essential machinery, and Australians had been warned at the outbreak of war to keep their existing typewriters in good working order, as it would be some years before new ones arrived here. 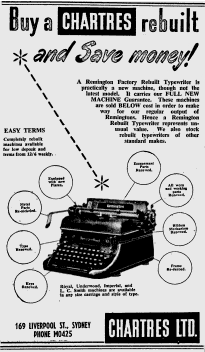 A Chartres Brothers business college, with Zercho as director, lasted longer than the typewriter business, and well after Zercho died at Kew in Melbourne on April 15, 1953. With a touch of supreme irony, the Chartres-Stott battle finally ended in 1968, when Stott took over Chartres.

The Stott college continues to operate to this day, on Elizabeth Street, near the Flinders Street Station in Melbourne. Through it, in a way, both the Chartres and Zercho businesses live on. 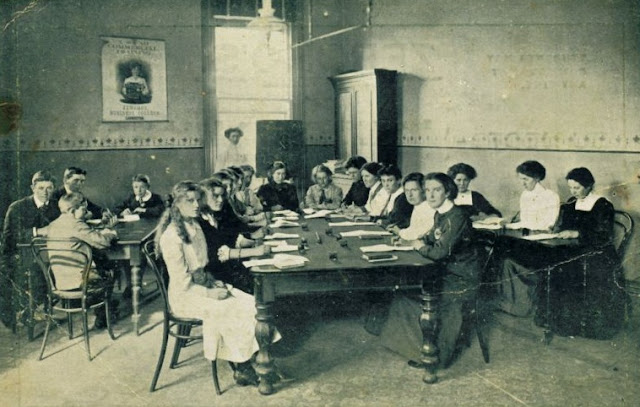 Students at the Zercho's Business College in Launceston, Tasmania. Note the typewriter poster on the back wall. 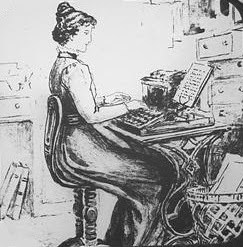 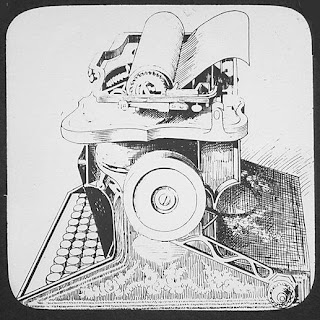 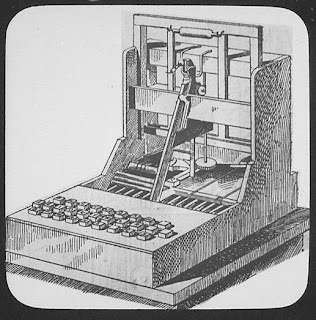 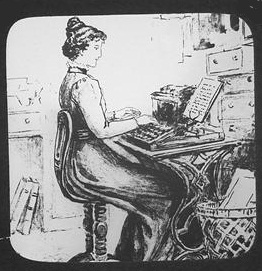 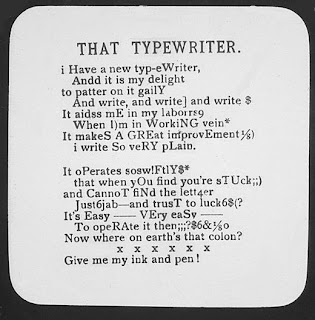 Above is a series of glass slides. There were used to give students a background on the typewriter at Zercho's Business Colleges, Collins Street, Melbourne in about 1906. 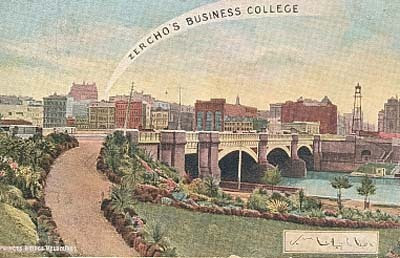 A colourful rendition of Princes Bridge, Melbourne. Rising into the sky is a white streamer inscribed with Zercho's Business College. In keeping with the business theme there is a short inscription in Pitman's shorthand, at the lower right hand of the card, which translates as "Where I am being educated for business".
The reverse describes an invitation as follows: Social Evening at Austral Salon. Students' Presentation to Mr Zercho. First Birthday of ZERCHO'S BUSINESS COLLEGE. 20th August, 1907." 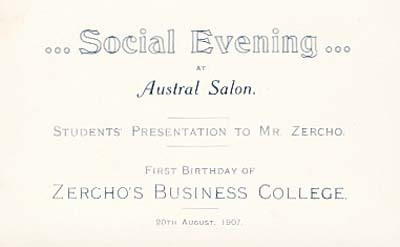 Hello - I have a Remington Rand model 17. I confess it has been badly soiled by rodents while stored in the shed. It has caused some guilt on my part for neglecting it - can you recommend any sites where I may look for another for parts?

Hi.
I'm a fiction writer. I'm doing research on buildings in 1920 Adelaide. I'm wondering if Stotts and Hoare in Galwer Place, Adelaide c. 1920 is related to this Company. It was next to the Register Building.

Stott and Hoare were rivals of Chartres. You'll find the Adelaide office mentioned elsewhere on this blog, keyword Stott.