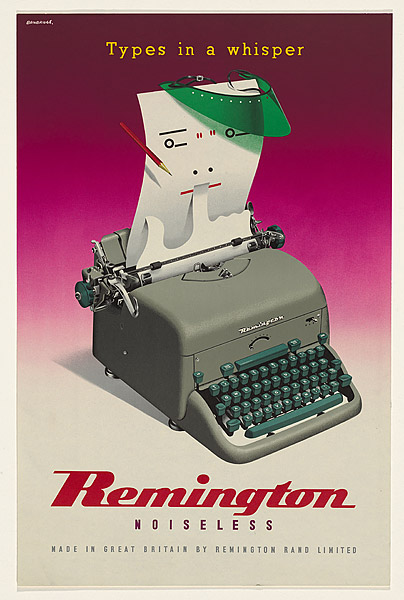 These Remington typewriter posters were drawn by an Australian artist, John Bainbridge (born 1918, Mosman, New South Wales; died London, 1978). Bainbridge was educated at the Swinbourne Art School and the  National Gallery School in Melbourne. He exhibited widely in Australia while working as the art director at the National Theatre in Melbourne. He moved to England in 1945, where he worked as an exhibition, theatre set and costume designer, a poster artist and documentary filmmaker. In 1959 he was elected a Fellow of the Society of Industrial Artists. 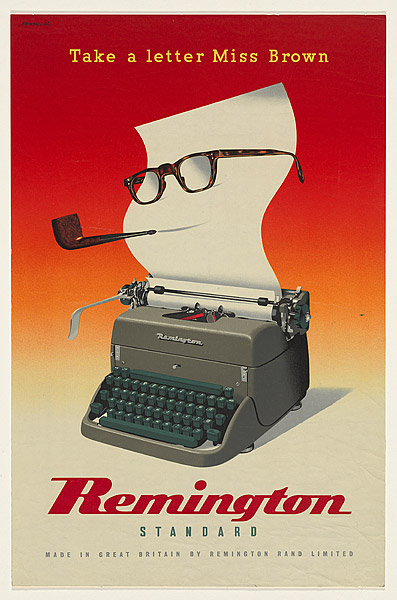 Remington typewriters were first imported by an agency into Australia by Stott and Hoare at the turn of the 20th century. In Sydney, the company was based in Martin Place, and in Melbourne at 428 Collins Street. 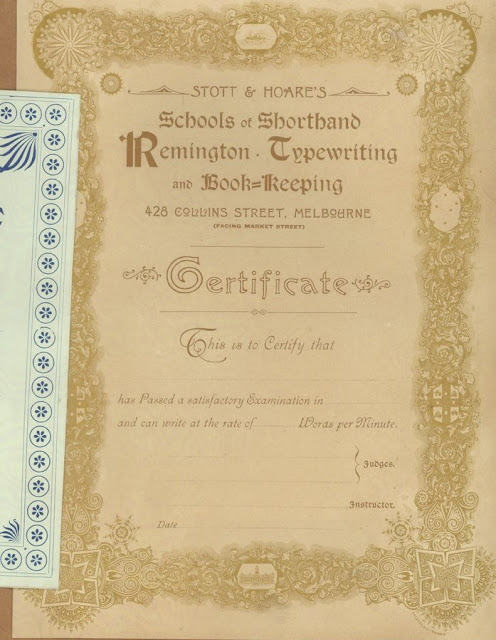 However, Underwood bought into Stott and Hoare, the company became Stott and Underwood, and Remington had to find another agency. Stott and Underwood imported and sold the Corona 3 portable, as well as Smith typewriters, but given Underwood's relationship with Remington was of a different nature, it declined to promote the sales of its great US rival.
From 1910 until 1945, Remington's distributor was Chartres. The dealings between these companies were so cordial that Remington gave Chartres one of its original Sholes & Glidden typewriters, later donated by Chartres to the Powerhouse Museum in Sydney. Chartres profited in many ways, being allowed to add its own name to the Remington label and marketing its own typewriter ribbons. Here is the Chartres-Remington Building at 375 Collins Street, Melbourne. 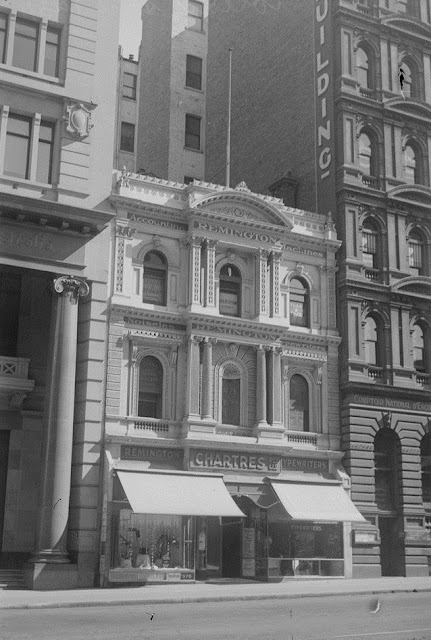 Chartres and Remington also established headquarters in Sydney, Adelaide, Brisbane and Perth to sell typewriters and run business colleges. In most cases, these buildings were known as “Remington House”. 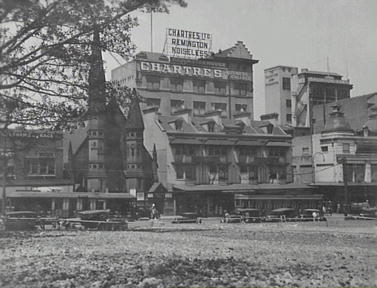 Remington were based on Liverpool Street (above) then later on the corner of Moore and Pitt Streets in Sydney and on Currie Street and later Grenfell Street in Adelaide(below). 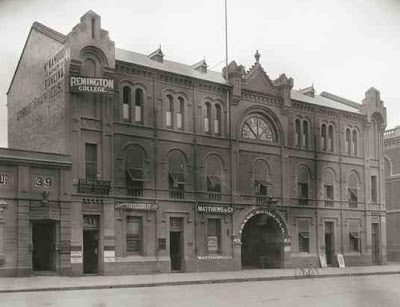 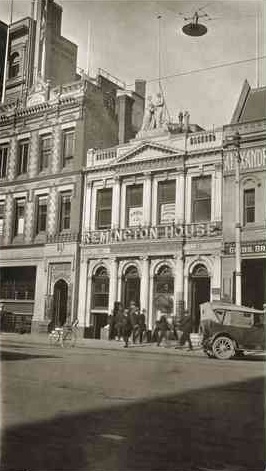 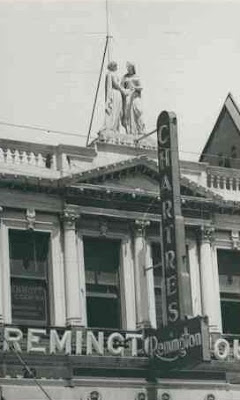 Remington pushed further north in Queensland, as far as Townsville. Here it is in 1913 at Clayton's Apothecaries Hall on Flinders Street, Townsville. 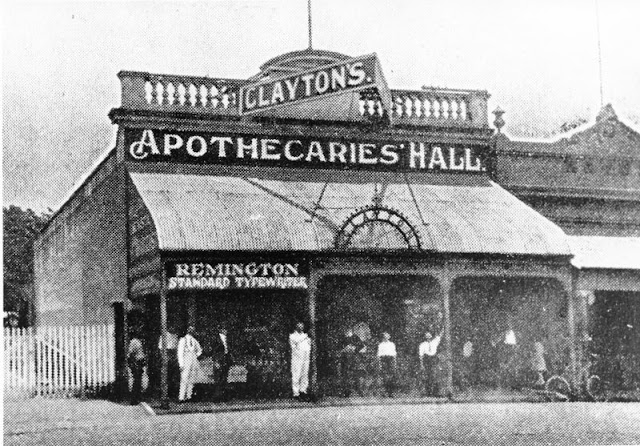 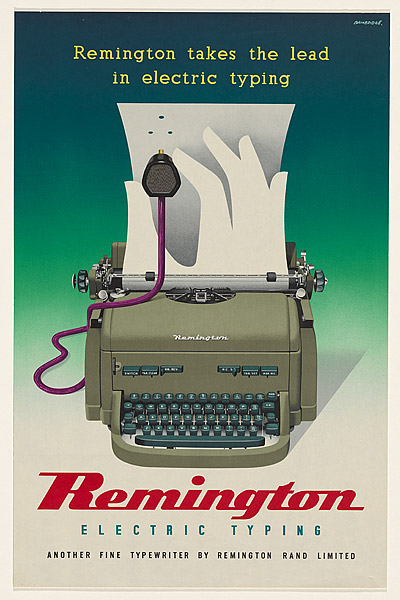 Posted by Robert Messenger at 00:03

Thanks for this. This is brilliant! And such fantastic artwork! I feel I want to rush out and find me a Remington Rand ASAP.

Having said that, I have a Remington 16 sitting right next to me as I type. It's in working order and types beautifully.

When I acquired it, I cleaned about half a century of neglect and gunk off it. It's a bit battered, but that really adds to it's character. But as I was cleaning the paper tray I noticed a smear in black at the top of it.

On closer inspection, it was the smeared gum of a long removed sticker. Possibly decal? I could just.... JUST make out the words 'Australian Built' in it.

Clearly the sticker had been removed, but it didn't seem to make a lot of sense, as it had a rectangular boarder around it, which kind of implied that it was a clear sticker with text. Didn't seem right for the 1936 age of this typewriter.

Anyway, now it appears to be genuine, and I kind of wish the 'sticker' was still there.

Thanks Scott. The "Australian Built" decals were put on Remingtons assembled in Sydney in the 1930s. Remington shipped the parts in and assembled them here to get around import restrictions, taxes and duties. It lasted until typewriters, and their parts, were declared non-essential items and shipments of them stopped with the outbreak of war.

Hi - can anyone help with sourcing ribbons for Remington Personal Riter and has SPerry Rand written on it as well ??? Has been sitting under our house in a cupboard for years and elderly mother-in-law wants to start typing her life story !!It is in immaculate condition.
Cheers
Susanne

Hi Susanne. Typewriter ribbons are still readily available in Australia (I am presuming you are in Australia?). However, it appears the only brand still stocked by office suppliers in this country is Hallmark, which is a black-only ribbon, a Malaysian brand. They come as a "Universal" two-spool (plastic) package for about $9. If the plastic spool does not fit your mother's typewriter (but being a Sperry-Rand, it should do), you will need to rewind the ribbon on to the spools of your mother's machine.

Anna Down Under said...

Hi, I just acquired a Remington Rand that has a faded sticker on front reading Chartres Business Services near as I can make out. Based on the look and features matching an old manual I found online I believe it's a Letter-Riter early 50s model. I cannot find any serial number ... would you know where to look for that? Thanks for this post, I had no idea what Chartres was.

Interesting history that has assisted me with my research and the background information on a Chartres Business Services, in particular the Remington typewriter that I have recently purchased late 2018.

I worked for Remington in the later 60's in their Canberra off as a stores manager. Later trained in Sales and worked direct sales on the western side of the Sydney CBD. Great team to work for, their training set me up for life in business.