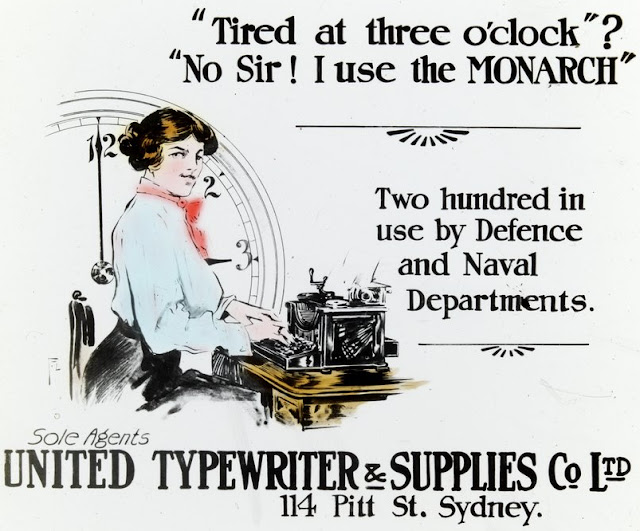 This is almost certainly Australia’s first coloured typewriter advertisement. It was used early in the 20th century, probably between 1910-1914, but possibly even earlier.
It is a transparency for a 8.5cm square glass lantern slide, which was obviously hand-coloured.
It was produced by a Melbourne photographer, Harold Godfrey Myers, apparently for advertising in cinemas.
It is now in the State Library of Victoria. 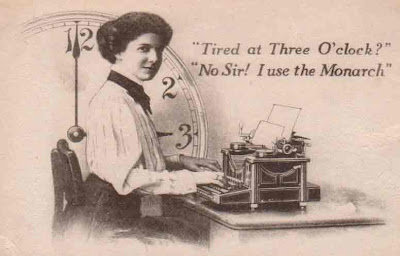 The image was a hand-drawn copy of an existing Monarch advertisement, one of two which featured the same woman. 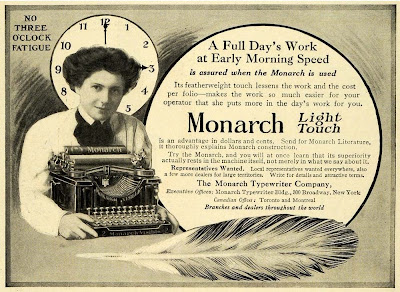 The United Typewriter and Supplies Co Ltd was an Australia-wide company which at the time was the agency in this country for Monarch typewriters. Its branches spread from St George’s Terrace in Perth in the West to Pitt Street in Sydney in the East. 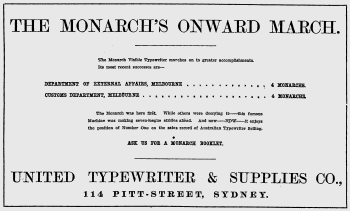 This advertisement appeared in The Sydney Morning Herald in 1908. United Typewriter, which was in competition with Stott and Hoare at the time, also advertised shorthand typing courses for 12 guineas.

Harold Godfrey Myers, of Mizpah, Ferntree Gully, Victoria, was the son of London-born Melbourne stereographic photography pioneer Godfrey Henry Myers (1868-1927).
Interestingly, given the use of the clock in the Monarch ad, Harold Myer's grandfather was a clockmaker who is said to have once worked on Big Ben in London.
Godfrey Myers ventured into commercial photography in 1901, with stereographic photographs capturing Melbourne's public celebrations of Federation and the associated Royal Visit in May. Two years earlier he had produced high quality images of processions of Victorian troops leaving for the Boer War in South Africa.
His sons joined him in his business.

Posted by Robert Messenger at 17:26

Those neat old ads had a very special character missing in modern ones.