Is this the World's Most Picturesque Setting for a Typewriter? 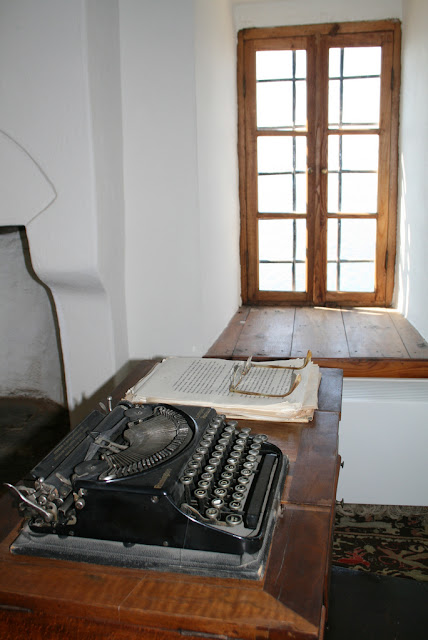 Late last year I posted on the typewriter-toting Australian Arctic explorer Sir Hubert Wilkins. As a result of my outline of the many achievements of this remarkable man, I have been made aware of another wonderful Australian: Joice NanKivell Loch.
A reader pointed out that “Wilkins once shared a sled – literally - with two other unsung Australians of exceptional courage. The intrepid missionaries that Wilkins met on his way to Russia included Sydney and Joice Loch, whose humanitarian work in Europe earned gold medals from other countries and an MBE from Britain.”
Naturally, this inspired me to research the Lochs, and the first thing that popped up was a marvellous image of the Loch’s old Remington portable typewriter, in the most idyllic setting imaginable. 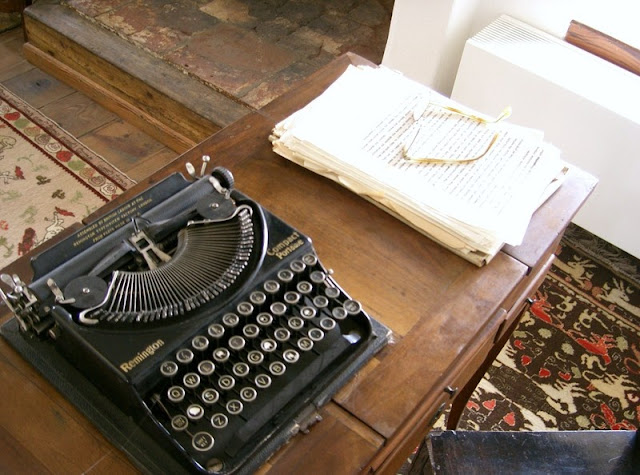 The absolutely gorgeous surrounds are a table in the Lochs' former home in the Byzantine Ouranoupolis Tower, looking at over Siggiticos Bay from the top of the Mount Athos peninsula in Greece. The tower is now a museum dedicated to the Lochs. 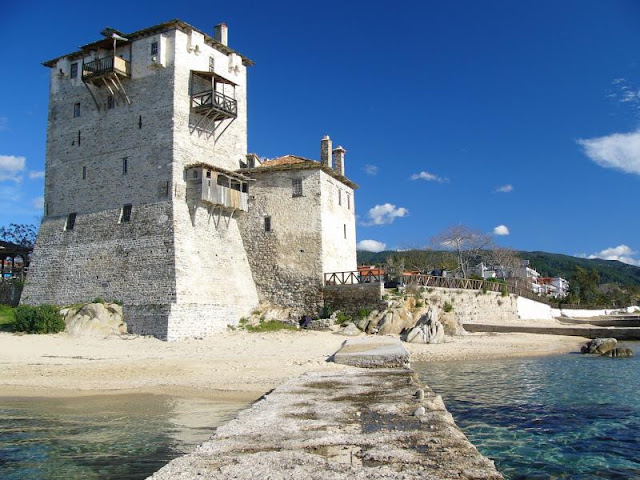 (On the paper plate of the Remington Compact portable typewriter is written that the machine was assembled "by British labour", at a Remington factory in London.)
Joice Loch has been described as “The great heroine Australia forgot … She is Australia's answer to the Scarlet Pimpernel, or Mother Teresa with a dash of Indiana Jones.
“Joice NanKivell Loch is Australia's most decorated woman - pipping war heroine Nancy Wake [the 'White Mouse' of World War II fame] by two medals. Yet the journalist and author turned humanitarian and rug designer remains virtually unknown. At her funeral in Greece in 1982, the Greek Orthodox Bishop of Oxford named her ‘one of the most significant women of the 20th century’.” She was indeed the most decorated woman of any nationality in the 20th century. 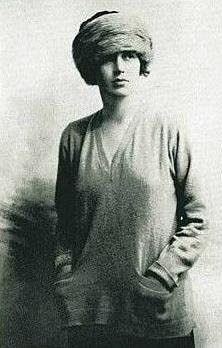 Joice Mary NanKivell was born into considerable wealth at the height of a cyclone, at the family-owned Farnham sugar cane plantation in Ingham in Far North Queensland on January 24, 1887. A monument unveiled on Palm Terrace, Botanic Gardens, in Ingham in late 2002 describes her as a “local heroine” who “devoted her life to humanitarian causes and was decorated by the Governments of Poland, Greece, Serbia, Romania and Great Britain”. 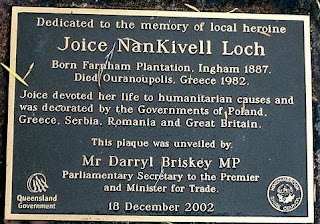 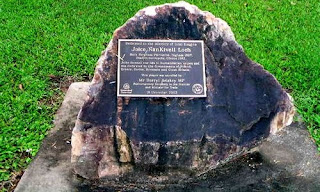 Her heroics and humanitarianism were the legacy of her childhood. The family’s great wealth was accumulated through the sweat of Kanaka (South Sea Island) slave labour. When that was abolished in 1890, the NanKivells fell into penury. They themselves had to experience what it was like to live poor, at Boolara in Gippsland in eastern Victoria.

Growing up on an isolated farm, Joice sent away for a book on touch typing. Once she was satisfied her typing speed was adequate, she successfully applied for an advertised part-time position as secretary to Dr Alexander Leeper, Professor of Classics at Trinity College, Melbourne University. Dr Leeper encouraged Joice's writing. She joined the Melbourne Literary Club. The Melbourne Evening Herald took her first war poem, and she appeared thereafter regularly in a short column, Under the Clock. Then she started book reviewing for the Sun-Herald. 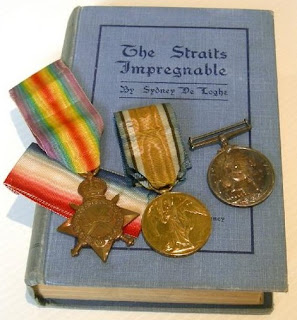 The original book with Loch's World War I medals 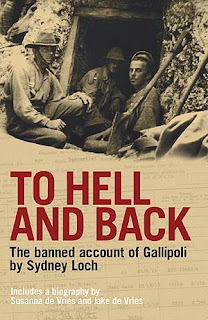 One of the books she reviewed was The Straits Impregnable (later republished as To Hell and Back), an horrific account of the Anzac campaign in Gallipoli in 1915, written under the pseudonym of “Sydney De Loghe”. “De Loighe” was, in fact, Sydney Loch, a London-born, Scottish-raised young man who had emigrated to Australia at 17, in 1905, and worked as a jackaroo. 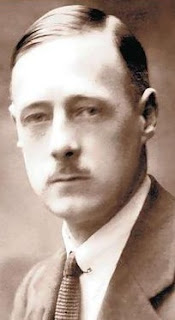 Loch survived Gallipoli but decided the truth of that unnecessary bloodshed – the evil work of Winston Churchill - needed to be exposed. However, the Australian military censor, fearing the realities of Gallipoli would dissuade other young Australian young men from enlisting to lay down their lives on the Western Front, banned the book. 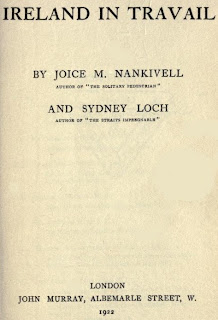 Joice, who had lost a beloved brother Geoff in that “Great War”, meet Sydney after reviewing his book and in 1919 they married. They left soon after for London. In 1921 the Lochs decided to travel to Ireland, at the height of the Troubles (Civil War) there, and to write about what really was happening. As this closing passage from Ireland in Travail would indicate, the Lochs soon fell foul of the Irish Republican Army and with their lives threatened, they had to quickly decamp to the Continent. 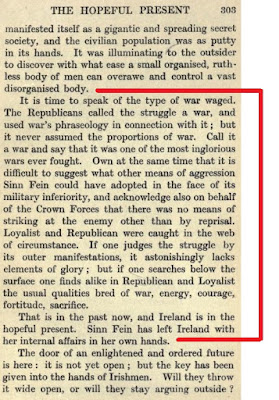 Joice and Sydney went to Poland as aid workers for the Quaker Relief Movement with the aim of writing a book about the damage that Lenin's troops had inflicted on Poland, and were awarded medals by the President of Poland for their humanitarian work. In 1922 they went to Greece as aid workers following the burning of Smyrna. The Lochs worked in a Quaker-run refugee camp on the outskirts of Thessaloniki for two years before being given a peppercorn rent on a Byzantine tower by the sea in the refugee village of Ouranoupolis. 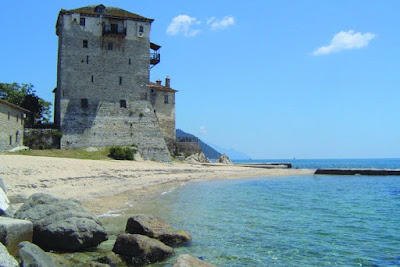 To help the villagers, Joice purchased looms so the women could work as rug weavers; she designed Byzantine rugs, using flowers, leaves and onion skins as dye for the wool. One of the rugs is now on display in the Powerhouse Museum in Sydney. Joice also acted as a medical orderly and held regular clinics for the villagers. For their work in Greece, the couple were awarded medals by the King of the Hellenes. 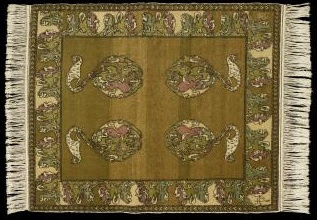 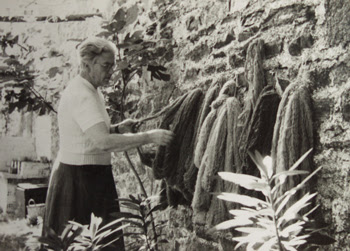 Joice Loch working with the dyed wool.
During World War II, Joice was awarded another two medals by the Governments of Romania and Poland for saving 2000 civilian refugees, mostly women, from Poland and 50 orphaned Jewish children from the Nazis. Joice had led a daring 18-month escape known as Operation Pied Piper from Romania, where she was running a refugee centre for Poles who had escaped from the Nazis and the Russian invasion. To enter British-controlled Palestine and be eligible for food rations, all the refugees had to be registered as soldiers. Hence, the first Polish soldier to land on Palestinian soil was a four-year-old girl! Subsequently Joice and Sydney ran a refugee camp for Poles at Haifa. 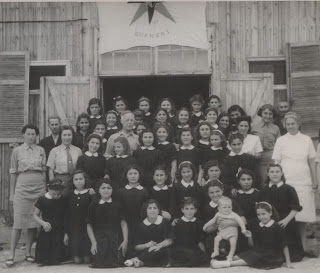 The Lochs with chidren at a Quaker school in Greece 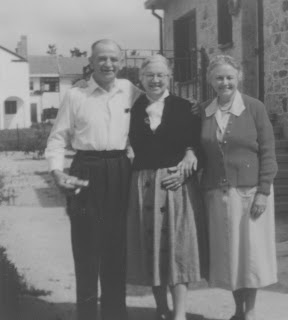 In 1945 they returned to Greece and their tower home and re-established the Pirgos rug industry in Ouranoupolis. 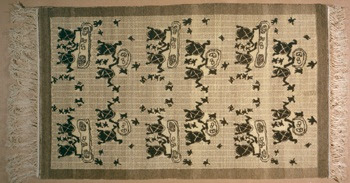 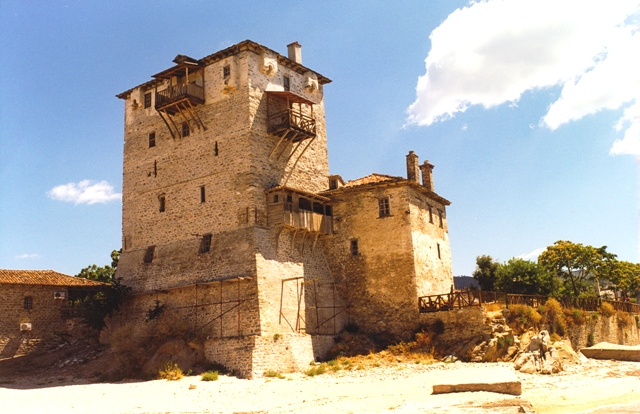 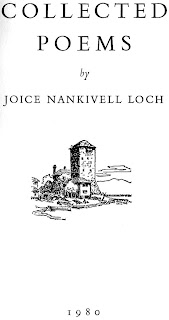 Sydney died on February 6, 1955. Joice outlived him by 27 years, and died at Ouranoupolis on October 8 1982, aged 95. For those Australians who do know about Joice, Ouranoupolis has become a place of pilgrimage, where they lay gum leaves on her grave. 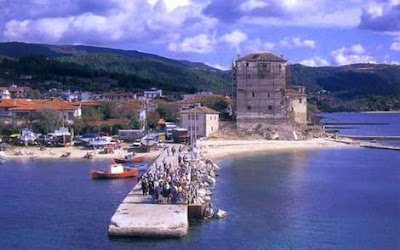 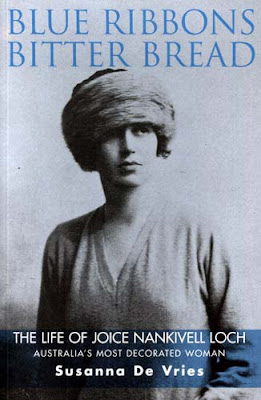 That is so fantastic! Thanks for the post. The tower from inside looks so peaceful and from outside so strong and mighty yet inviting to have someone enjoying its perches.

What an inspiring story and a beautiful tower. I noticed the rugs even before I learned of her role in the rug industry.

I know the Gallipoli story only from the film, but that at least is unforgettably harrowing.

vivek sivastava said...
This comment has been removed by a blog administrator.
25 February 2012 at 00:01

In 2007 we visited the Tower while holidaying in Greece. I am Australian born but my parents are from the generation that lived through the turbulent years of World Wars and Civil War in Greece, and they finally made Australia home in 1950s.
When I was reading Maria Loch's story inside the Tower I was filled with deep emotion. I was so proud of this Australian woman who had offered so much to the women of this small seaside village, situated perhaps in one of the most scenic places in Greece. A local noticed my tears of emotion and we spoke- she said how her mother's generation considered Maria Loch as a saint, as she had given them hope when there was only despair.
My Greek and Australian identities are fused- I cannot separate the one from the other, having been born in rural NSW but also very close to my parent's culture. Maria Loch embodies for me whatever is most noble- she saw the plight of displaced people and was able to contribute so much, with her husband, to bettering lives that would have been so desperate without the creative solution to their source of a livelihood which gave them some autonomy.
Thank you for providing this information.