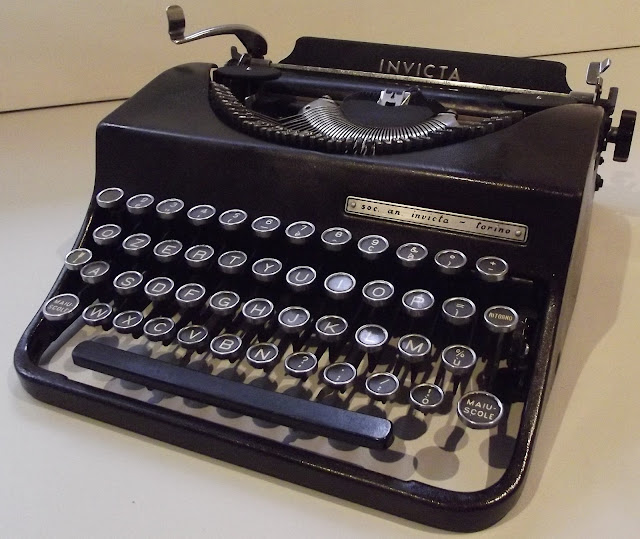 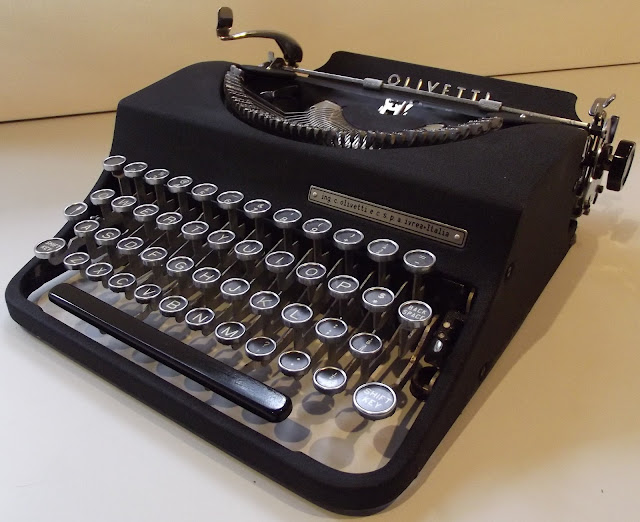 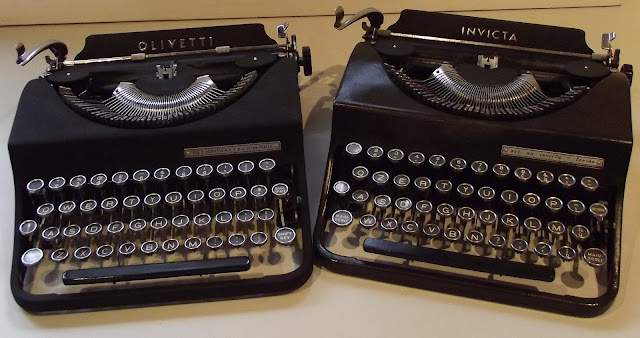 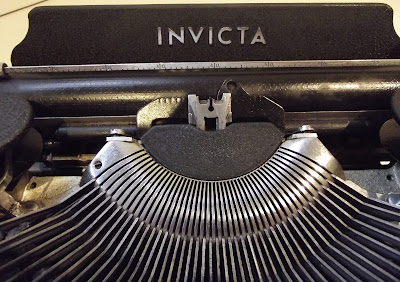 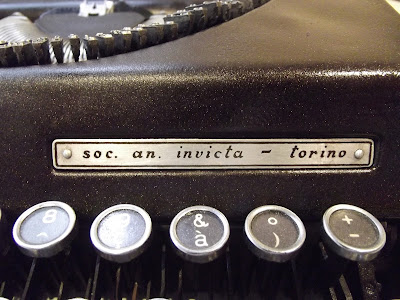 The Invicta typewriter company remains something of a mystery. It has often been assumed that Invicta was taken over by Olivetti in the 1930s, and that an Olivetti portable typewriter was simply relabelled Invicta (as well as being sold as an Olivetti). 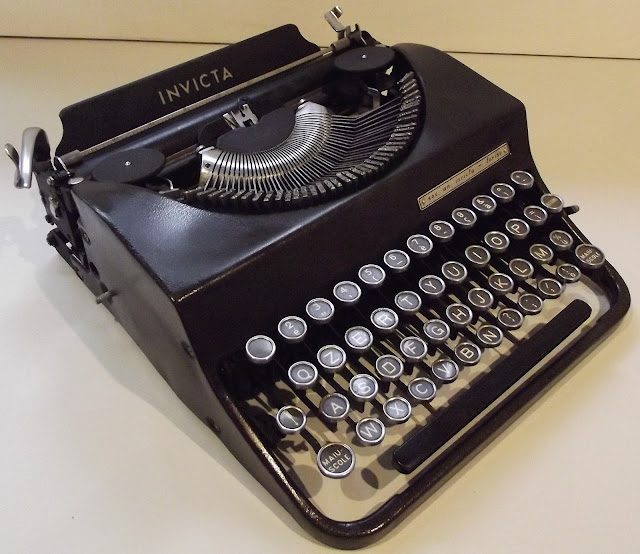 It now appears the case is not as straightforward as all that. Indeed, it seems possible the outer casing for this portable typewriter was actually an Invicta design, and the machine was made by a still existing company using the workings of Olivetti’s first portable, the ICO MP1. 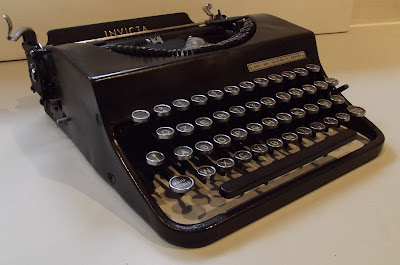 Given the poor quality, thin metal used in the extremely lightweight outer casing, as well as the easily-chipped crinkle paintwork, I'm guessing this is a down-market Olivetti (Invicta) portable, possibly made necessary by immediate pre-War resource and financial restrictions. Overall, the machine is a significant step down from the ICO MP1, cut back in other areas apart from the casing. But it still works beautifully.
Quite how this all sits in the Olivetti and Invicta histories, however, is difficult to satisfactorily unravel. 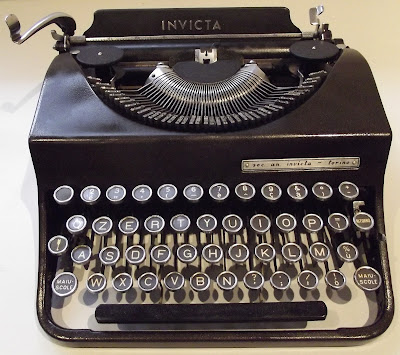 The Società Anonimanello Invicta was established at Via Colli 82 in Turin in 1921 by a typewriter engineer, Giuseppe Giachero. He started making standard size typewriters called Invictas in November that year. These went on the market in 1923, after which Giachero’s company was named Invicta and its headquarters moved to Courgnè Street, Turin. 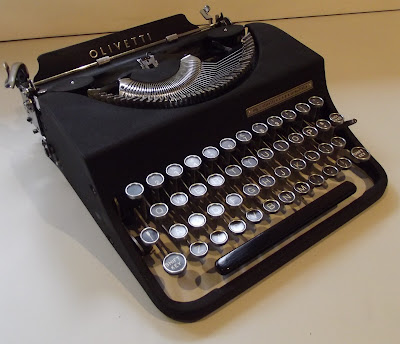 Further models appeared in 1925,1927,1929 and 1936.
Giachero (born 1862?), from Lusernetta, outside Turin, had spent time in the US, arriving in January 1911 and again in 1916. He apparently worked there for one of the major typewriter manufacturers, possibly Underwood (Underwoods heavily influenced his own desktop designs). 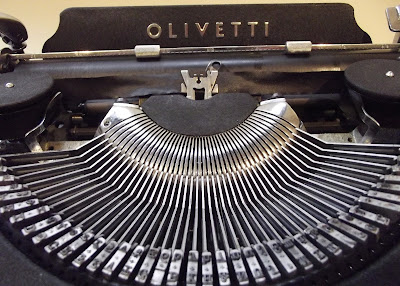 Invicta became a limited public company based in Turin in 1938, at which point Olivetti bought into it, probably heavily. It was the first step in what, post-War, was to become Olivetti's massive worldwide expansion. And it came immediately after Camillo Olivetti stepped down as company president, to be succeeded by son Adriano. 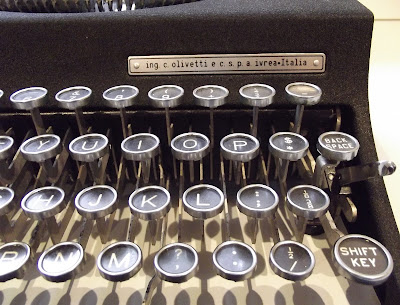 That same year this adaption of the ICO MP1 appeared, both as an Invicta and an Olivetti portable. This joint production was described by Invicta as a “collaboration with Olivetti”. 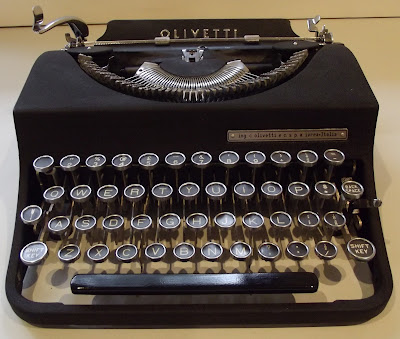 It is where the semi-portable Olivetti Studio 42 was produced from that time onwards. The Studio 44 was also later made here.
The production of Invicta typewriters ended in 1947, but Invicta continued to produce Olivettis under licence. 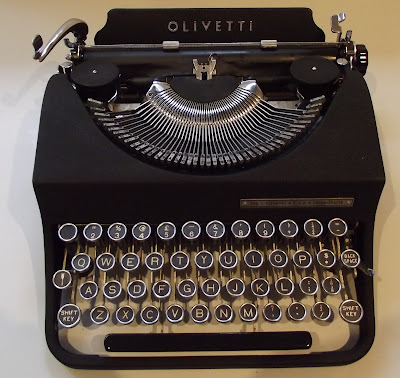 You may note a different badging on the paper plate and also on the front of some of the Olivetti-Invictas. Also, the Olivetti seems a slightly upmarket version of this machine, with extras such as chrome on the knobless left, which the Invicta does not have. 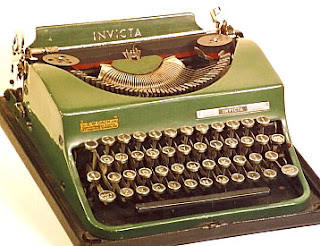 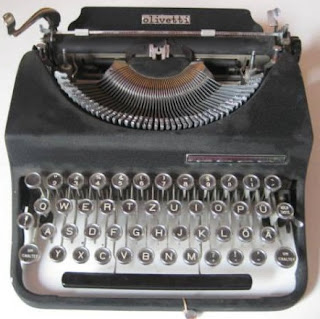 The Invicta-Olivetti MP1 was also marketed as the Harrods by London’s high quality department store. These were made by “Invicta Ltd, Turin”. Earlier, Harrods had sold its own version of the more stylish ICO MP1, with an "H" badge in the centre front where the ICO logo sits on the Olivetti.
The Harrods below is gone, but far from forgotten, from my own collection: 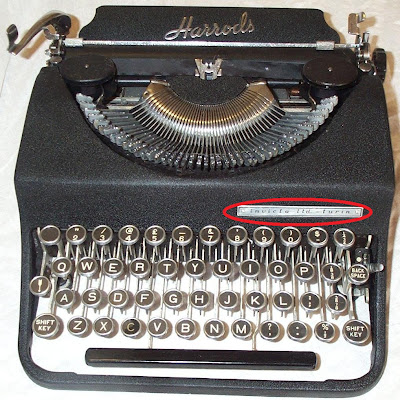 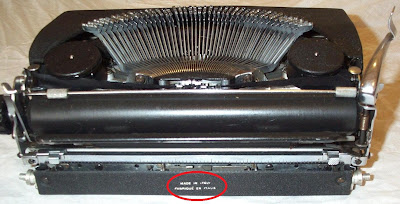 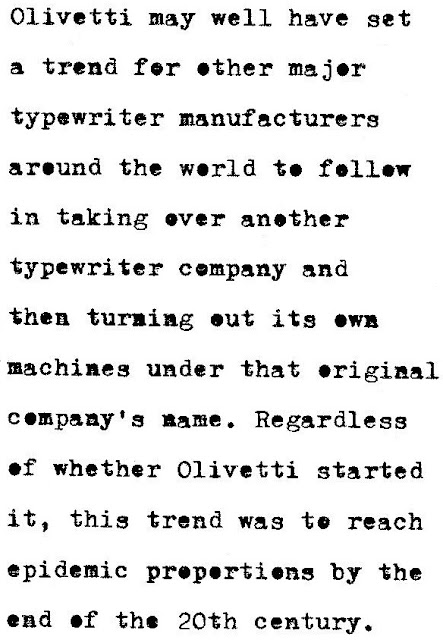 Posted by Robert Messenger at 13:39

Very nice typewriters and interesting post. I find it interesting with many of the machines in the late 1900s having different brand names on the front and Litton on all of them on the back.

Very interesting. How are the machines to type on?

Hello, I bought the same Invicta few days ago.
I'm trying to find out a new ribbon to replace the old one, in ogden to use the typewriter: could you give me some information about that? I can't find anything useful on web.
Thank you very much!

Hi I have an Olivetti which belonged to my father and I am trying to get an idea of how old it is. Can you help?

Hi I have an Olivetti which belonged to my father and I would like to get an idea of how old it is. It looks like the photos you have and I know he had it before I was born 1967. Are you able to help?