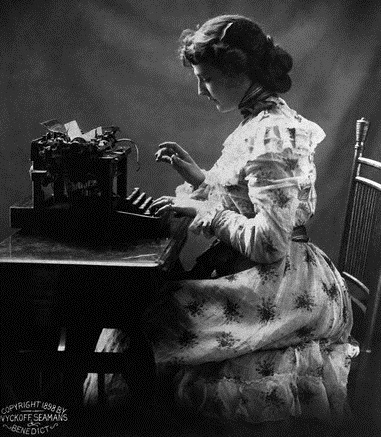 In 1898, this absolutely stunningly beautiful woman posed in a promotional postcard shot for Wyckoff, Seamans and Benedict.
Comments on my post about the Miss International Secretary competition of 1958 showed there is still interest in the work and conditions of typewriting secretaries.
However, it was not just secretaries who relied on typewriters as work tools and on their typing ability for a living. There were, for example, copytakers at newspapers and radio and TV stations, women who typed in census and election details, women who took dictation, and women who transcribed manuscripts into typescripts.
The skill of women typists was vital in many lines of business, including the media, as well as in government.
Fast, efficient, high-quality work cannot be quantified, yet that is what people tried to do with typists in the US in 1947.
“Time and motion” were words that conveyed a notion which sent a chill down the spine of workers back then. “Chief executive officers”, “personnel managers” and “industrial officers” weren’t much known. But “time and motion” experts were the source of much fear and uncertainty. They posed the question: “Is there an answer to the production drive?” 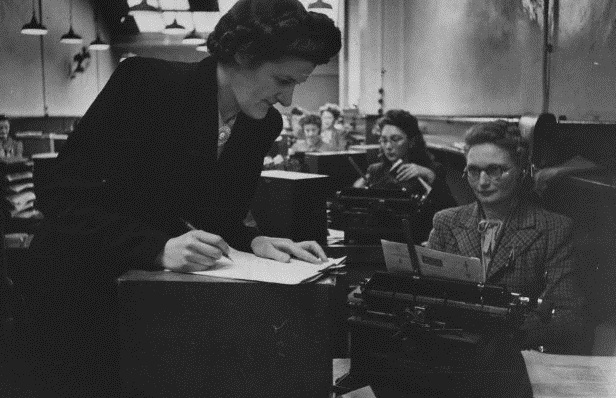 Mrs Stibbets became one such “time and motion” expert. In this US office scene from 65 years ago, Mrs Stibbets, a supervisor of typists, checks a recording apparatus which showed the number of keystrokes each person achieved each day.
The standard number was 45,000 keystrokes, and a bonus was paid for each 1000 keystrokes a day over the standard.
Typists started work at 8.30am and by 12 noon they had to have scored 30,000 keystrokes. Then they took a lunch break and came back in the afternoon to rack up the next 15,000 or so.
Naturally, some typists resented this degree of supervision. There was fear of the loss of a job involved: those who were consistently below standard faced the sack.
Yet typing proficiency bonuses remained in place for at least another 30 years, as shown on my post about the Australian Government enticing young women to come to Canberra to work in the 1970s. 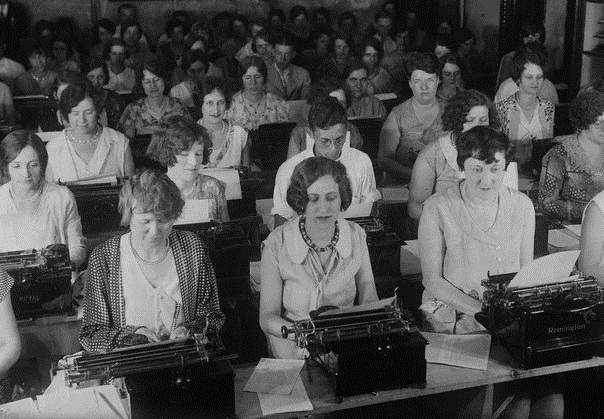 Competition for places in typing pools had traditionally been fierce. One way of scoring a job was to win a typing contest.
Here contestants get ready to start in the 1929 Bundy Typewriter Company’s typing contest in Philadelphia. The winner was the youngest entrant, Catherine E. Moran, 19, of German Town, Pennsylvania. 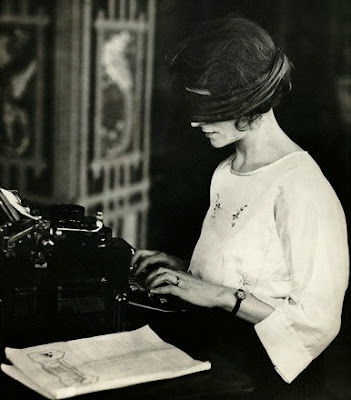 The blindfolded Miss Millicent Woodward (in real life Mrs Barlow) was “said to be Europe's champion typist, with a record of 239 words a minute for memorised sentences and 173 words per minute for straight dictation”.
She travelled to New York to take part in speed typewriting contests. Miss Woodward, the wife of a British army captain, George Barlow, received a letter from Scottish tea magnate Sir Thomas Lipton before her departure, wishing her luck in her attempt to lift the cup – something Sir Thomas never got to do, despite a record five attempts to win the America’s Cup. 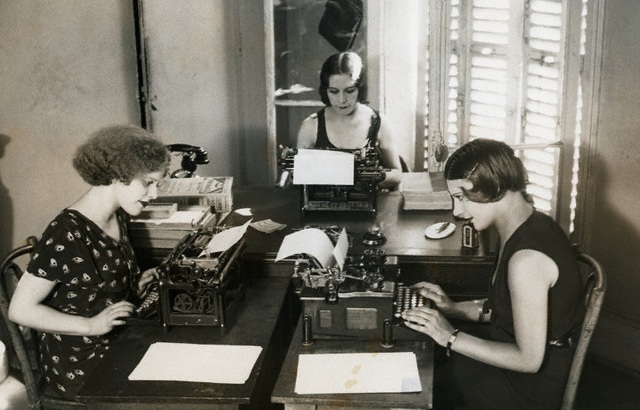 There often wasn’t much room to manoeuvre off Newport, Rhode Island, and some 1920s and 30s typing pools weren’t all that comfortable in terms of working conditions, either. 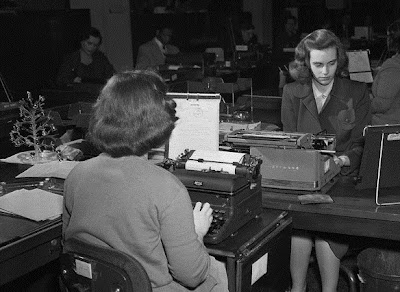 More at ease is this lady typing letters dictated to her on a railway carriage across the Atlantic, in 1934. North Eastern Railways provided a specially designed office on board its express train service between Newcastle-on-Tyne and King’s Cross station in London. The office stayed open from 8.15am to 5.30pm. 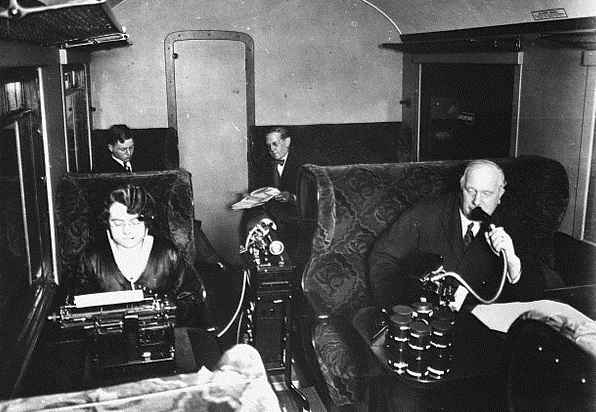 One attempt to achieve greater typing efficiency was made at Boston University in 1930, when experiments were carried out on the impact of typing to music. 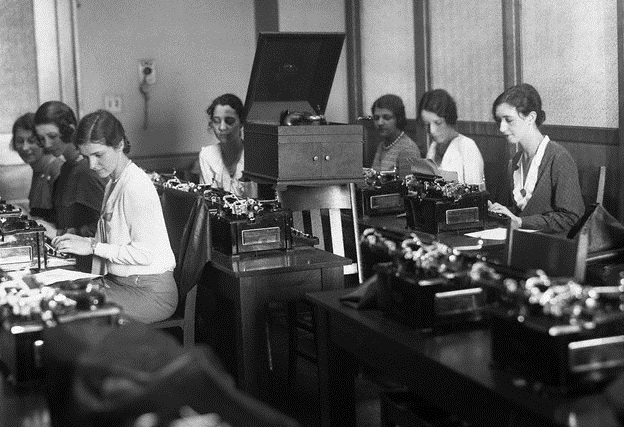 In 1937, a Mrs Hamilton copied the manuscript of Sir Hall Caine's The Life of Christ, which had been sold to an American publisher for a record sum. The writing is so small that Mrs Hamilton had to use a magnifying glass to read it. 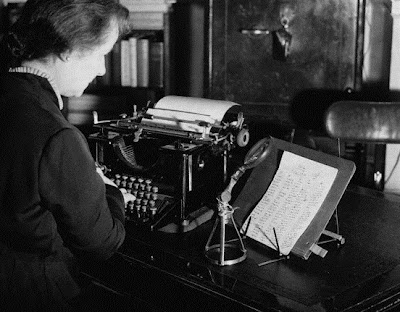 Quite why anyone would need to type an “SOS message” I do not know, but it happened on this big noiseless in 1939. 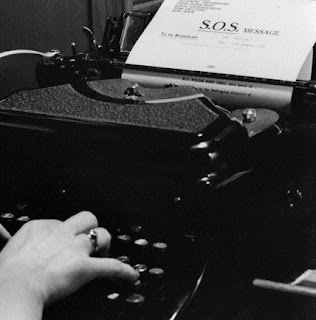 Copytaking was an artform, the more so in the days before headphones incorporated microphones which allowed copytakers to talk and listen while typing a reporter’s copy. Here, also in 1939, a BBC copytaker struggles to take down the news while typing and talking. 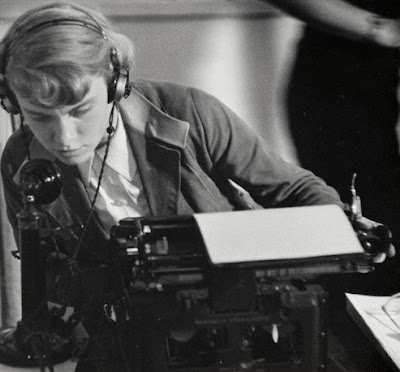 Still at the BBC, in 1959, Miss Christine Collins and Mrs Eraine Vidler process through manual typewriters the results of a British general election. The results were screened as they are received, by feeding the information into a studio's computer at Lime Grove, London. 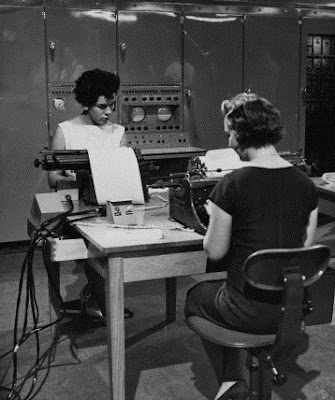 Here are “transcribers” at work in Shell Mex House in London in 1960. Note how the method of recording voice messages for transcription has changed since 1934. 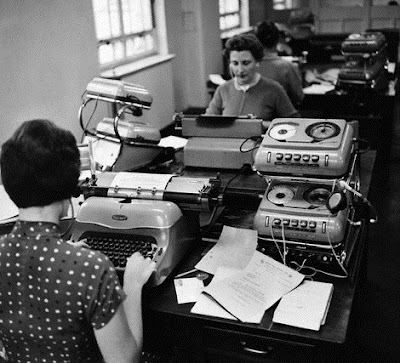 In 1902 had come "The Remington Girl - a typist ready to take dictation.” 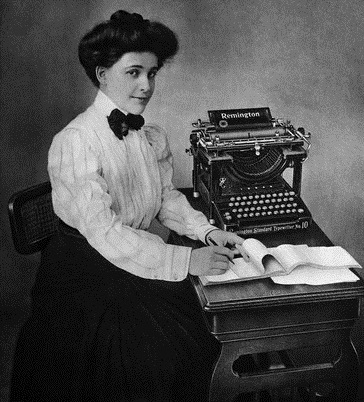 Much later, Underwood and Corona tried to use glamour to sell typewriters, too: 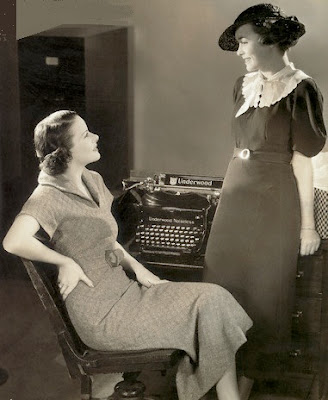 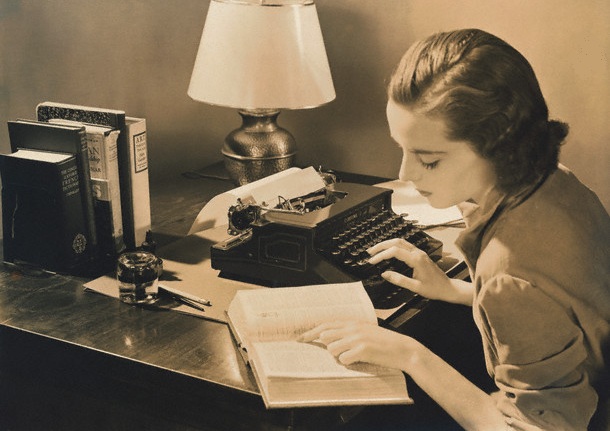 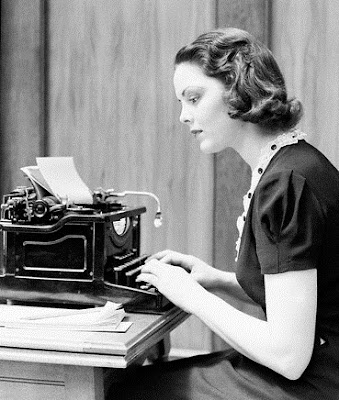 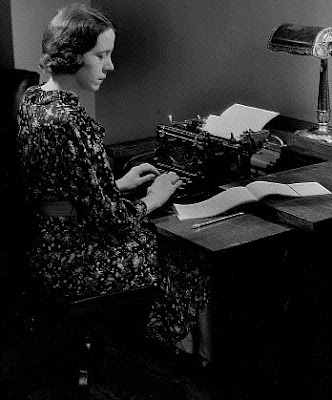 Finally, the woman who started all this, Lillian Sholes, back in the 1870s. 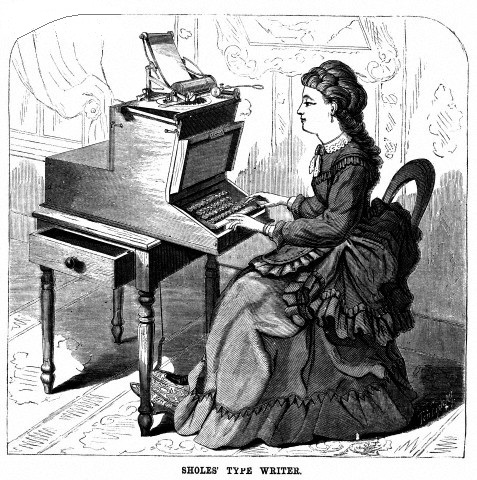 Posted by Robert Messenger at 01:23

A wonderful collection of photos.

The whole dynamic of the speaking male "dictator" and the typing female secretary is quite interesting. Does any office operate like this anymore?

very interesting. My mom was a secretary all her working life. She still doesn't like manual typewriters, by the way. The good secretaries were not only fast and accurate, but could spell, and would routinely edit and correct grammar and usage.

notagain makes a good point. It took a lot of intelligence, and sometimes creativity, to transform an oral communication into a text in Standard Written English.

Very interesting post. The photos are fantastic. It looks like some Webber wire recorders in the one picture. I do not know about today, but our department secretary when I worked for a large multi-national company was extremely accurate and fast typist as well as always correcting us engineers on our spelling and grammar and she would even correct the technical jargon and get it correct!

Thank you for your comments, Richard, notagain and Bill. The points notagain and Bill make about secretaries are very pertinent to copytakers. So many people complain today about the mistakes which appear in newspapers. Copytakers were one of the important tiers which filtered copy; proof readers and compositors were others. These were all removed when new technology was introduced. Yes, computers saved a lot of money in wages, but at what enormous cost to the newspaper industry. Bring back copytakers, I say. Their knowledge of English, grammar and spelling meant they could also edit as they took down copy - I know they did from experience. Copytakers are the missing link in newspaper production, and it shows!

Not only that but they were fantastic people to have around newspaper offices. They brightened up the place with their humour and good nature. I miss them all!

This is a great blog. I’m trying to find out more info about the very first picture you have Posted. I have one that’s very similar but can’t seem to find much info about it. Any help would be greatly appreciated thank you