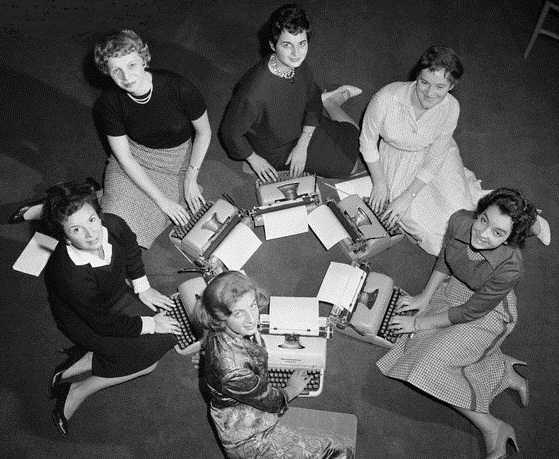 These six young woman won competitions held around the world to select the finalists in the 1958 Miss International Secretary. The final was held in New York in early November 1958.
The six top secretaries are photographed here on October 30 that year at the Remington Rand office in New York, with just one small part of their booty - the gift of a new typewriter each.
The typewriters were presented during an all-expenses-paid week-long trip to New York, during which the finalists were wined and dined royally,  received a wardrobe of clothes each and, in the words of the Brazilian finalist, enough spending money to buy an apartment in Rio. 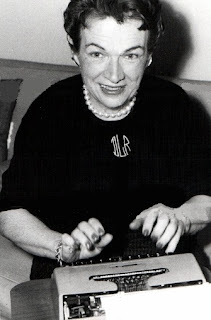 Dorothy Roe uses an Olivetti Lettera 32, not a Remington
The event got plenty of publicity across North America, courtesy of a syndicated article by Associated Press women's editor Dorothy Roe. The story mostly appeared on the women's pages of newspapers.

Ms Roe described the finalists as the pick of the world's "Girl Fridays".

The six finalists were Zulema Sullivan of Argentina, Emilia Branco de Faro of Rio de Janiero, Brazil, Marisa Salerno of Venezuela, Patricia Todd of England, Jacqueline Wolf of France and Liesbeth Haegle of Stuttgart in Germany.
Ms Roe interviewed the Brazilian and German finalists, who told her they earned between $70 and $90 a month, which was an average wage for the work they did.
Ms Haegle, 20,  said she had won the German contest against 8000 other entrants.
Ms de Faro, 22, said she worked from 7am until 4.45pm each day, with half an hour off for lunch and a 15-minute coffee break in the morning. Ms Haegle's hours were a little more humane, with 90 minutes off for lunch.
Both secretaries said bosses needed to be polite and considerate. 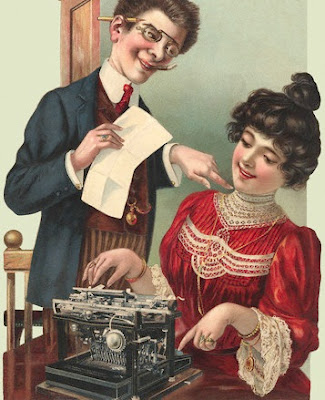 Posted by Robert Messenger at 23:16

Those salaries seem incredibly low, I put them in an inflation calculator and $80 from 1958 is $620 today?

Back then a good secretary was very important. Salary-wise it looks like Austrailia was on par with the USA. A good secretary may have been important, but giving her a good salary was not quite as important. In the 60's I think my mom and other secretaries where she worked earned somewhere around $90 a week.

Hmmm, ... not a single finalist from the U.S.A.!? Were our secretaries that bad?? But, then, Margaret Owen's generation had passed by long before.

For some strange reason I love office work. I recently got an office position and although we have no typewriters and don't write many texts to be printed I still like it.
I'm pretty sure I would love to be a professional hm... what's-the-male-version-of-a-secretary-called.