Cheer Up and Smile: The Drunkard's Friend and the Bijou Portable Typewriter 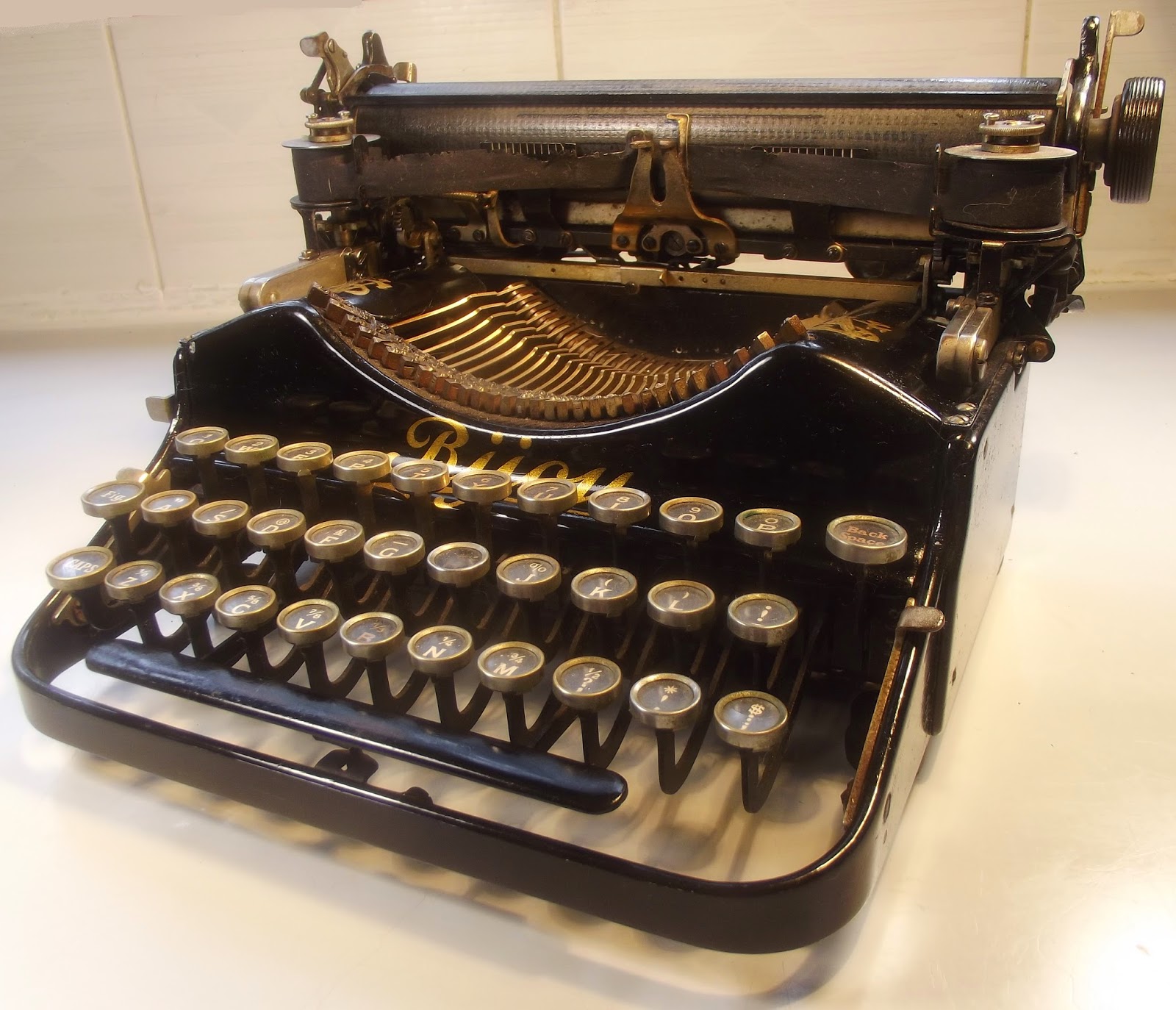 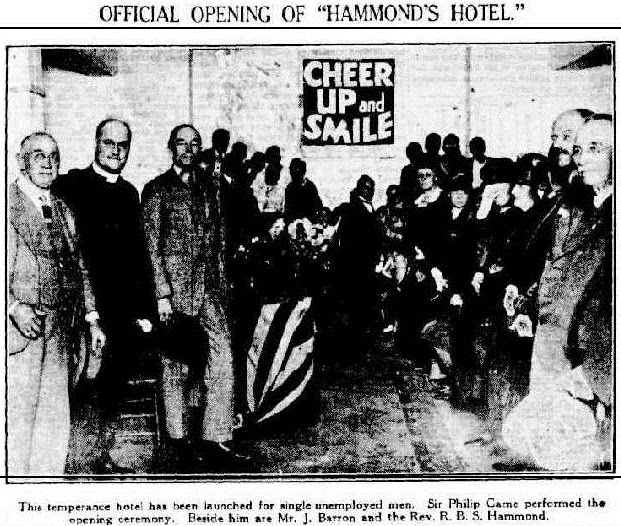 It is always a delight to discover the provenance of a typewriter. That enchantment, it seems, is all the more heightened when the discovery is made by sheer chance, many years after having been given the typewriter. And it's impossible to beat when the "chronology of ownership" is heavily laden with Australian history.
Take the case of my little three-bank folding Bijou. Well, actually, don't take its case - which is a gorgeous, round-topped dark brown leather case, looking a little like what we in Australia might identify as a bowling bag (that is, for lawn bowls).
Two weeks ago, after making some hard decisions about which typewriters I wanted to keep, I was prepared to gift the Bijou to a very dear friend in the US, an extremely generous friend who had expressed an interest in it. However, as he was paying for two other typewriters and high shipping costs, and already had a folding Erika three-bank, he decided not to take up the offer. Any slight disappointment I might have felt was soon dissipated.
One week ago, after being asked by the National Museum of Australia about typewriters used in World War I by our war correspondents, I did a bit more research into the matter and found that Remington was selling Bijous in Australia, in competition with Corona 3s, in 1914.
This came as a bit of a surprise, and led me to revisit my Bijou, viewing it from a slightly changed perspective. As I was aware this Bijou had been owned by an Australian, I guess I should have known better, but it had never occurred to me that a German portable would have been on sale in this country during the war years. I just assumed it had been brought to Australia by its original owner.
Yesterday, as I continued to research typewriters being sold in Australia in 1914, I came across a rather startling little item from the Sydney Sunday Times of March 12, 1914, while trawling through the National Library of Australia's Trove digital archives. Here it is: 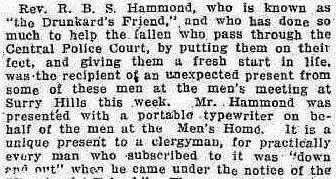 I readily confess I'd not previously heard of the Reverend Robert Brodribb Stewart Hammond, and that ignorance represents what had been a significant gap in my knowledge of Australian history. The Reverend Hammond, I soon found, deserves to be regarded as an Australian saint - and I'm sure that if his calling had been as a Roman Catholic, he'd already be high on the list of candidates to be canonised. It wasn't difficult to find out about him. There is a long entry on the Reverend Hammond in the Australian Dictionary of Biography. 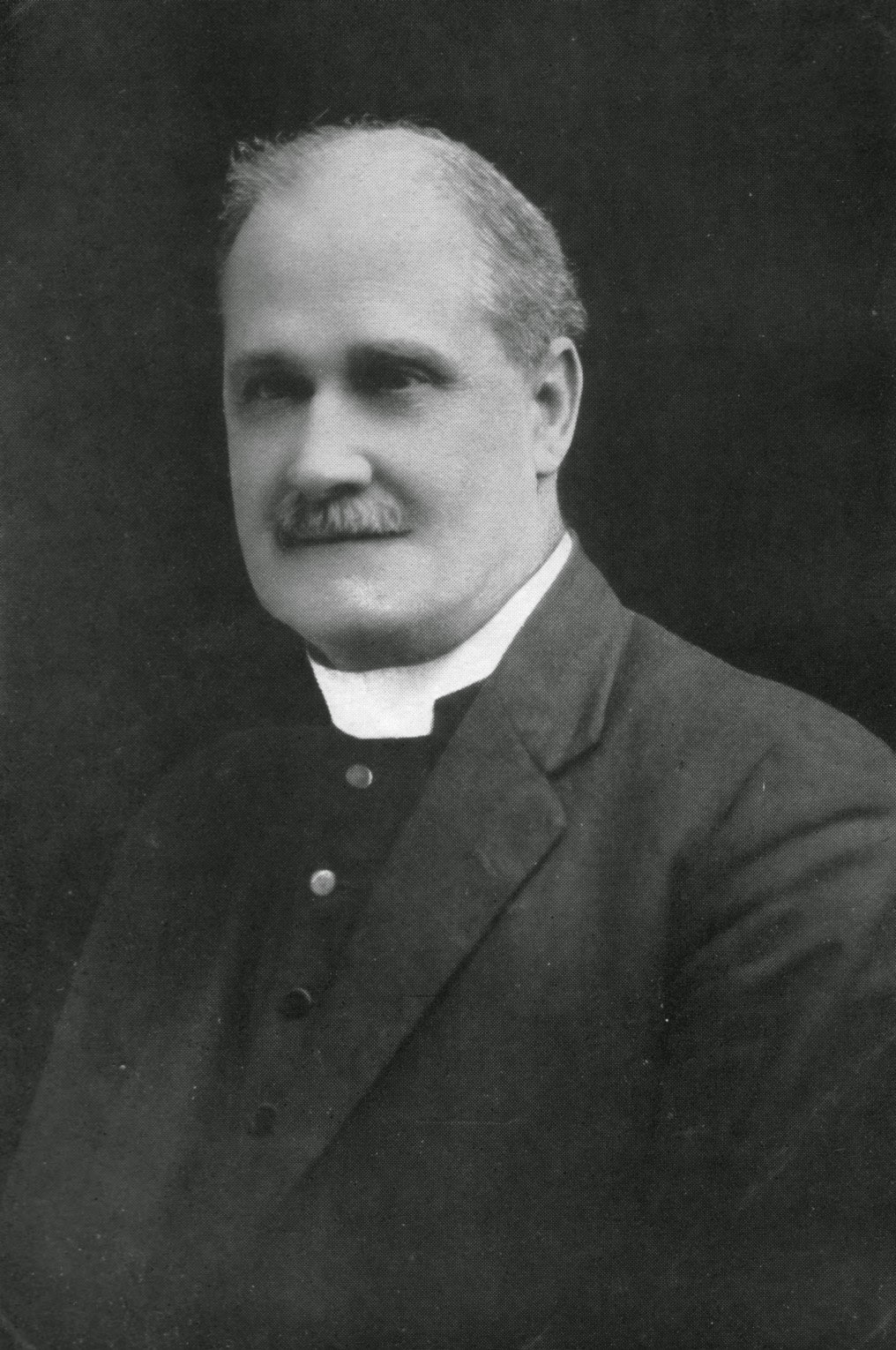 The Reverend Robert Hammond
I'll come back to that. My first reaction on reading the newspaper item was to wonder whether the portable typewriter given to Hammond by the reformed drunkards in 1914 was a Bijou. Well, it had to be either a Bijou or a Corona 3, as strictly speaking no other true portable typewriters were available for sale in this country at that time. A Bijou cost £15, which presumably was within the collective reach of the former "down and outs".
Behind my first thought was a recollection that, when I was told by its donor that he was giving me his grandfather's Bijou, back in 2009, Rob Glasson mentioned the original owner had been a man of the cloth. But the details were sketchy. The donation itself came in unusual circumstances. I was in a hotel room in Oriental Bay in Wellington, New Zealand, when I was awoken by a cell phone call from Rob at 4.30 one morning. To cut a long story short, I arranged with Rob for him to deliver the Bijou to my work place in Canberra after I'd returned to Australia.
To say I was thrilled when I eventually received it is an understatement. Yet little did I know then - or until yesterday - what a story it could tell.
Rob's name was on my list of donors, and I had a vague memory he lived somewhere around Kiama in New South Wales. The only Rob Glasson I could find in the White Pages was a retired pilot, now a budding author, who lives in Coonamble, a long way from the coast. This Rob Glasson, however, was very helpful when I explained my quest. He put me in touch with distant relatives in Kiama, and through them I was able to contact the Rob Glasson I was after.
Rob told me what he knew of the Bijou's provenance, and armed with that information I was able to establish that it was indeed the portable typewriter gifted to the Reverend Hammond in Sydney in 1914. Rob's maternal grandfather was the Reverend Samuel Raymond Robbins, a Methodist minister who was born in Thirroul, New South Wales, north of Kiama, in 1890. He died at Parramatta in August 1953. (Thirroul is where D.H.Lawrence wrote Kangaroo in 1922.) The Reverend Robbins was an avid collector of antiques and he and the Reverend Hammond were good friends who lived close to one another during their various postings, first in the Sydney area in the 1930s and later in Northern New South Wales in the early 1940s. On at least one occasion in the mid-1930s they even preached together, though Hammond was an Anglican and Robbins a Methodist.
In March 1935, the Reverend Hammond's Bijou was stolen. Upon its return to him, perhaps feeling it was either past its "use by" date, or was "soiled goods", he decided to give it to the Reverend Robbins, knowing of Robbins' interest in collectibles and presumably thinking the Bijou already was one. After all, as a three-bank folding typewriter, it was well and truly outmoded technology at that point. 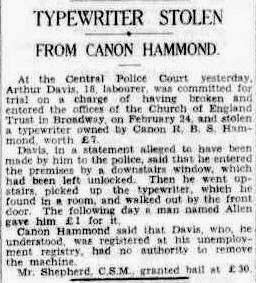 So there it is, an amazingly colourful if chequered chronological history of my Bijou! So pleased was I to uncover these details, I immediately sat down and typed on the Bijou. Given all it has been through these past 100 years, it typed remarkably well: 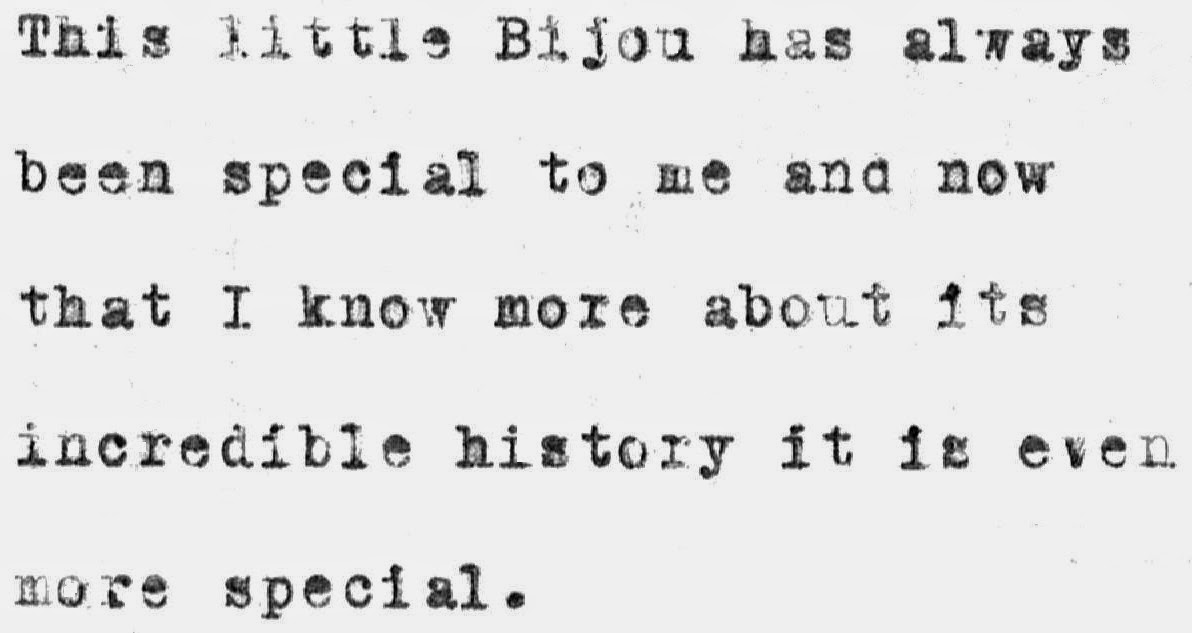 Now, for the story of the Reverend Hammond:

Robert Brodribb Stewart Hammond, Anglican clergyman, evangelist and social reformer, was born on June 12, 1870, at Brighton, Melbourne. He was educated at Melbourne Church of England Grammar School, where he was school captain in 1888, and exhibited the sporting prowess which later took him into the Essendon Australian football team that won the Victorian Football League premiership in 1897. 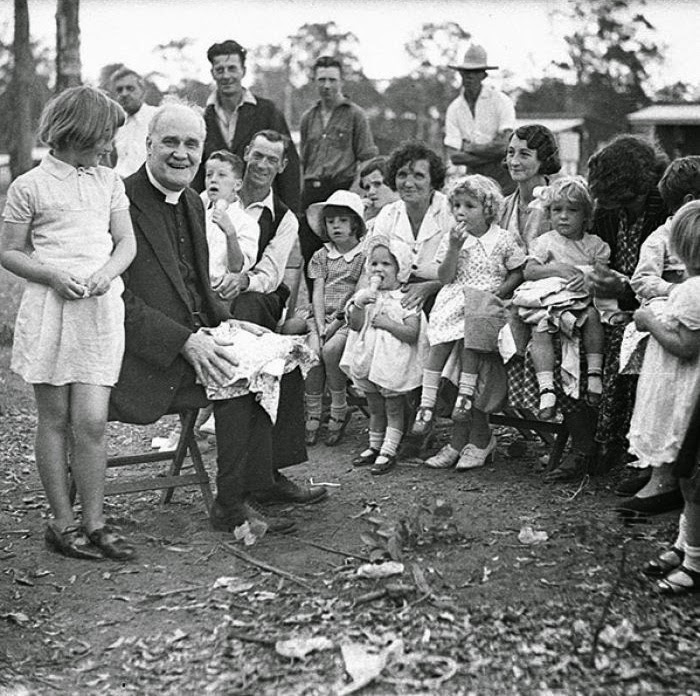 Hammond was made a deacon by the bishop of Melbourne on May 20, 1894, and ordained priest in 1896. He moved to Sydney in 1899 and was organising missioner for the Mission Zone Fund of the Church Society in 1904-11, working within the congested areas of Waterloo, Woolloomooloo, Surry Hills, Redfern and Darlington. His vigorous programme of pastoral care and evangelism made him familiar with the social problems of Sydney's slums. In 1918 he became the rector of St Barnabas, Broadway, where he remained until 1943. Hammond restored St Barnabas from decline to vigorous life. The Wednesday night men's meetings proved popular, while the noticeboard fronting Broadway became famous for the weekly 'sermon-in-a-sentence': 'Drink promises you heaven, but gives you hell!'
One of the best-known Australian churchmen of his day, Hammond regarded himself primarily as an evangelist, and his zeal, commanding presence, compelling oratory and gift of repartee led many to Christian commitment. His concern for the 'whole man' and his knowledge of life in the slums convinced him that spiritual welfare was intimately related to general well-being. Appalled by problems associated with alcohol, he became an advocate of total prohibition and a leader of the temperance movement, revelling in the nickname of 'the Wowser'. 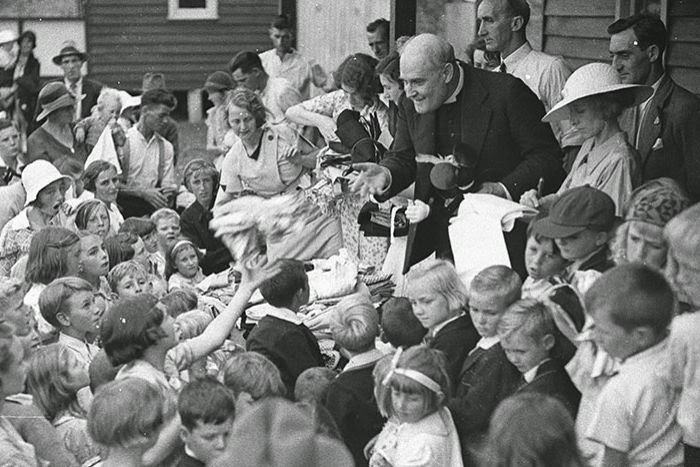 Another striking personal initiative took Hammond daily for years to the 'drunks' yard' at Central Police Court, where, from 1912, he was permitted to talk to those awaiting appearance in court. Before handing over to a special missioner he had personally interviewed over 100,000 people, of whom 20,000 had signed the pledge. As a temperance leader, Hammond was well known beyond Australia and attended international conferences on alcoholism in North America. His experiences led to the publication of With One Voice: A Study in Prohibition in the USA. 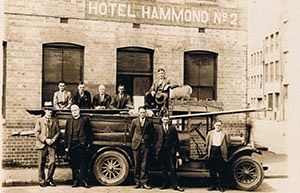 Also known as 'Mender of Broken Men', Hammond in 1908 established, in an old warehouse at Newtown, his first Hammond Hotel to rehabilitate some of Sydney's destitute. By 1933 there were eight (and a family 'hotel' at Glebe). Deploring cold charity, he aimed at restoring hope and self-esteem to his 'guests' as well as providing temporary assistance. The diverse forms of relief organised at St Barnabas in the Depression were placed under its registered charity, Hammond's Social Services, which by the time of his retirement administered relief, Police Court work, and a Children's Court and Family Welfare Bureau. 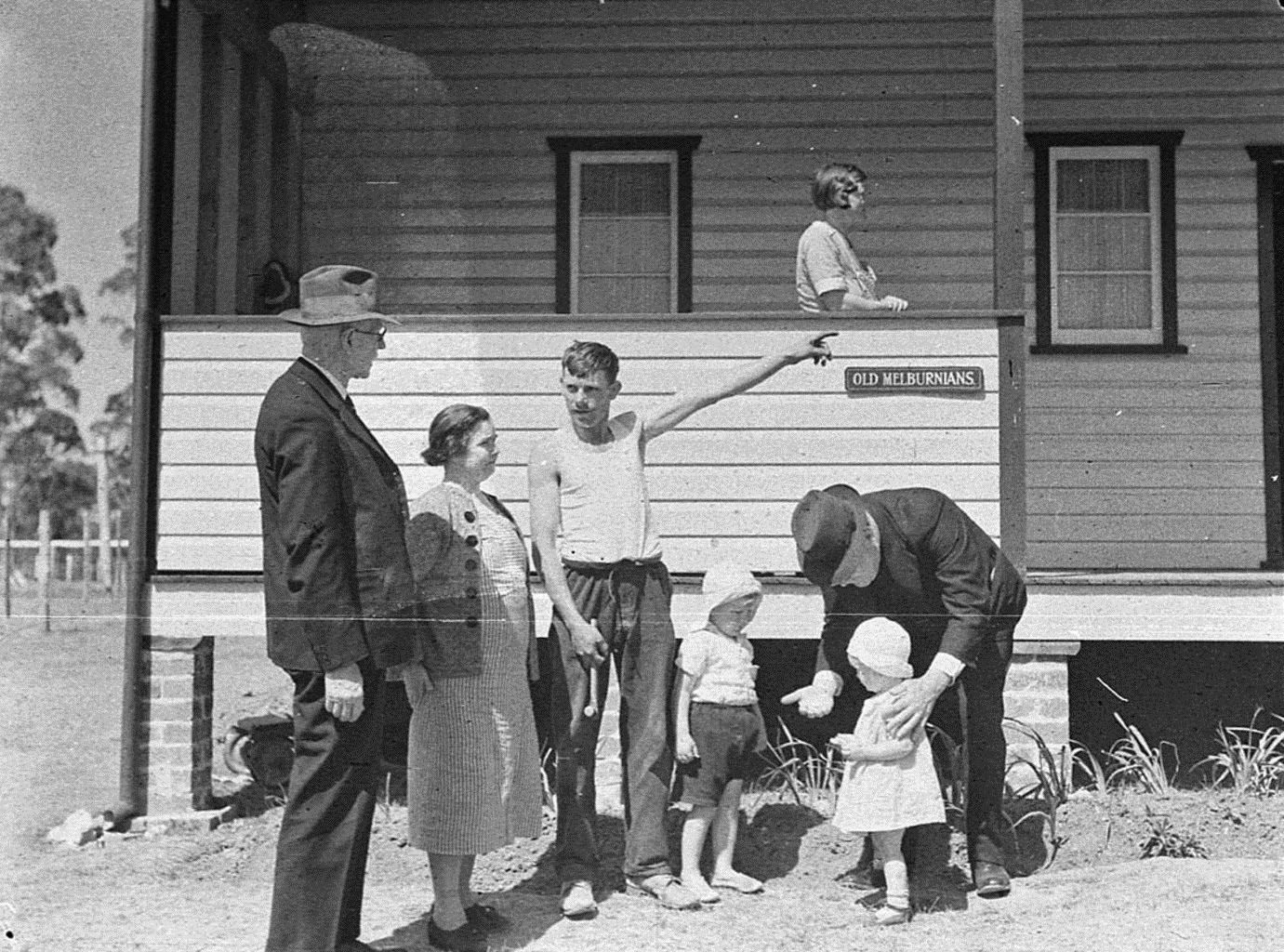 His greatest single achievement in social reform was Hammondville. Suspicious of radical ideology, Hammond saw in the 'back to the land' movement a partial solution to the steep rise in homelessness, a means of encouraging independence and self-esteem through home ownership, and a bulwark against communism. In 1933 a company, Hammond's Pioneer Homes Ltd, was set up and by 1937, on land purchased near Liverpool, 100 homes had been built to house families with at least three children and a father unemployed at time of settlement. Settlers were helped to find employment, could buy their homes by easy instalments, and supplement wages by home-grown food. Hammondville won recognition as an important model for small-scale land settlement. 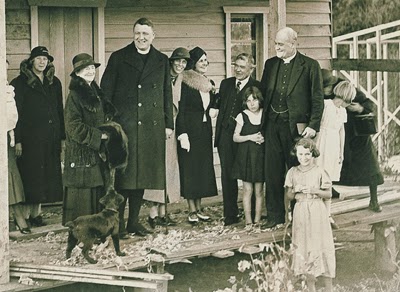 Hammond died of cardiac failure on May 12, 1946, aged 75.
He was tolerant of other persuasions and was a man of enormous energy, intensity and complexity of character. Deeply compassionate and capable of great patience, he could also erupt in bursts of anger, but he had pre-eminently the gift of appealing to a diversity of people, from the destitute and struggling to civic and business leaders who supported his projects with money and expertise.
Posted by Robert Messenger at 09:29

Amazing! How great that you were able to discover this story behind your machine -- and I'm glad it's still in your hands. :)

It cheered me up, great story!

You've got great researching skills! This is one of my favorites, by far. Folding typewriters are just so dang cool.