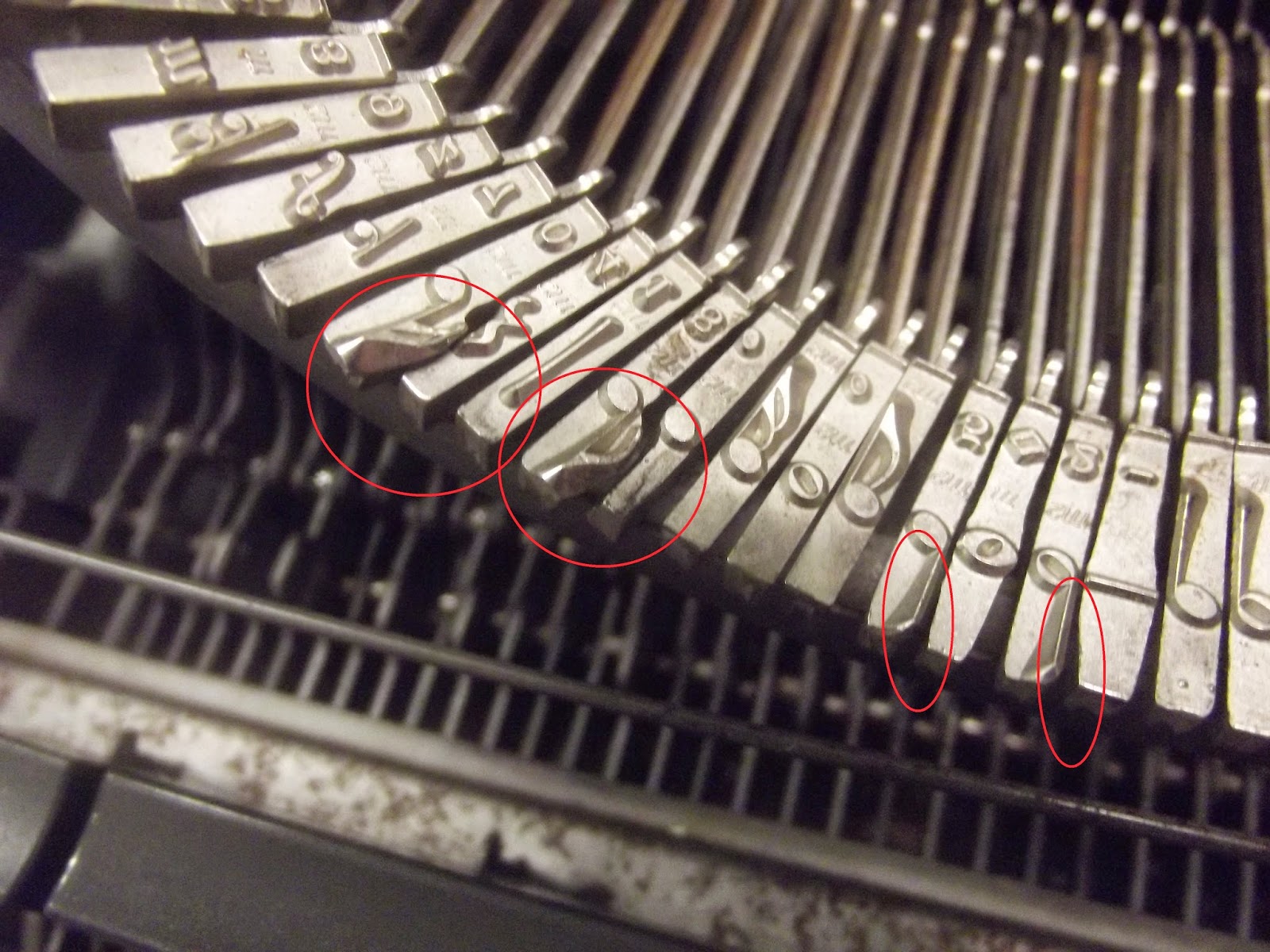 Note how the typeslugs have been cut in such a way so the larger notes can fit snugly together in the typebasket. 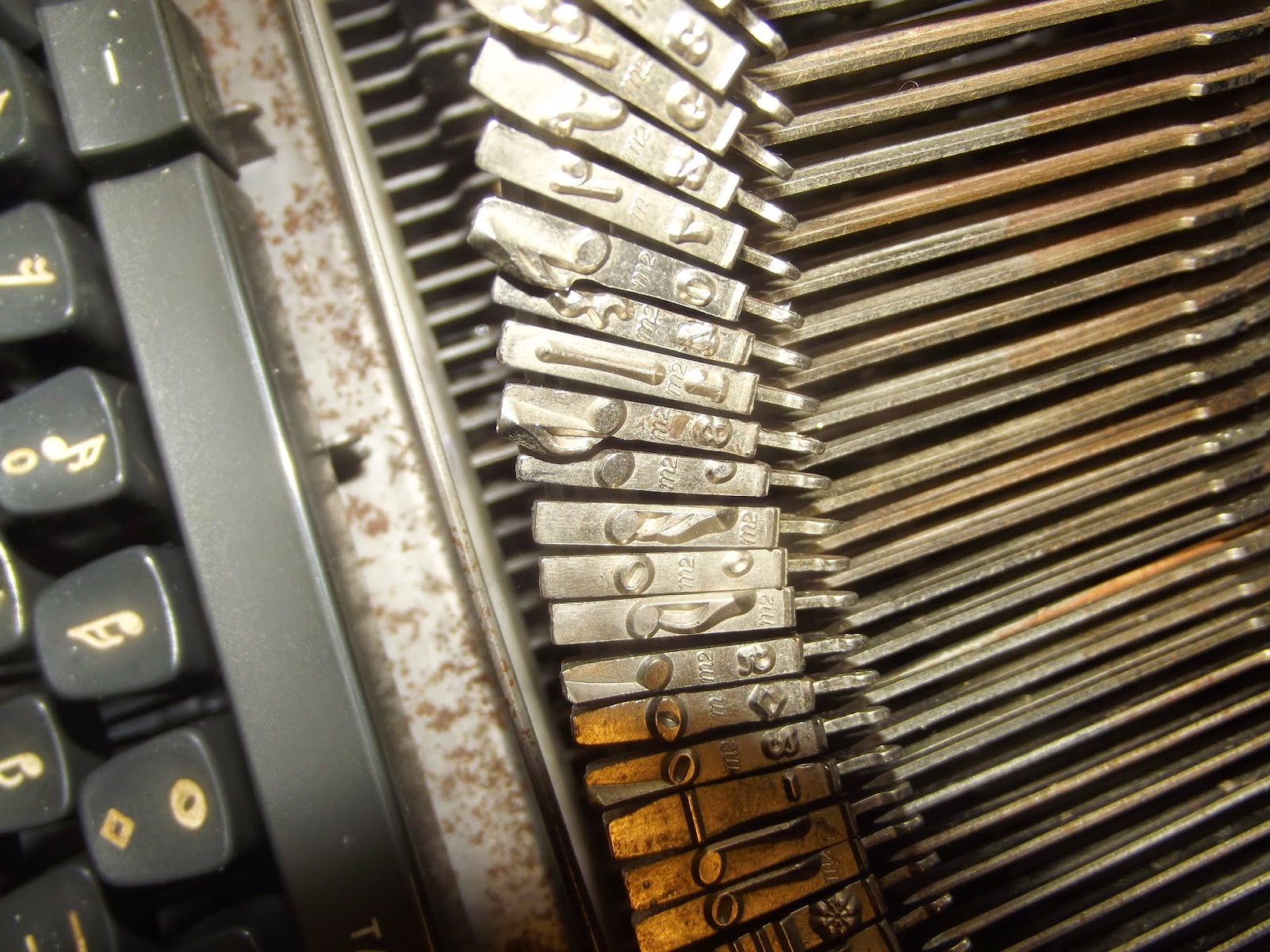 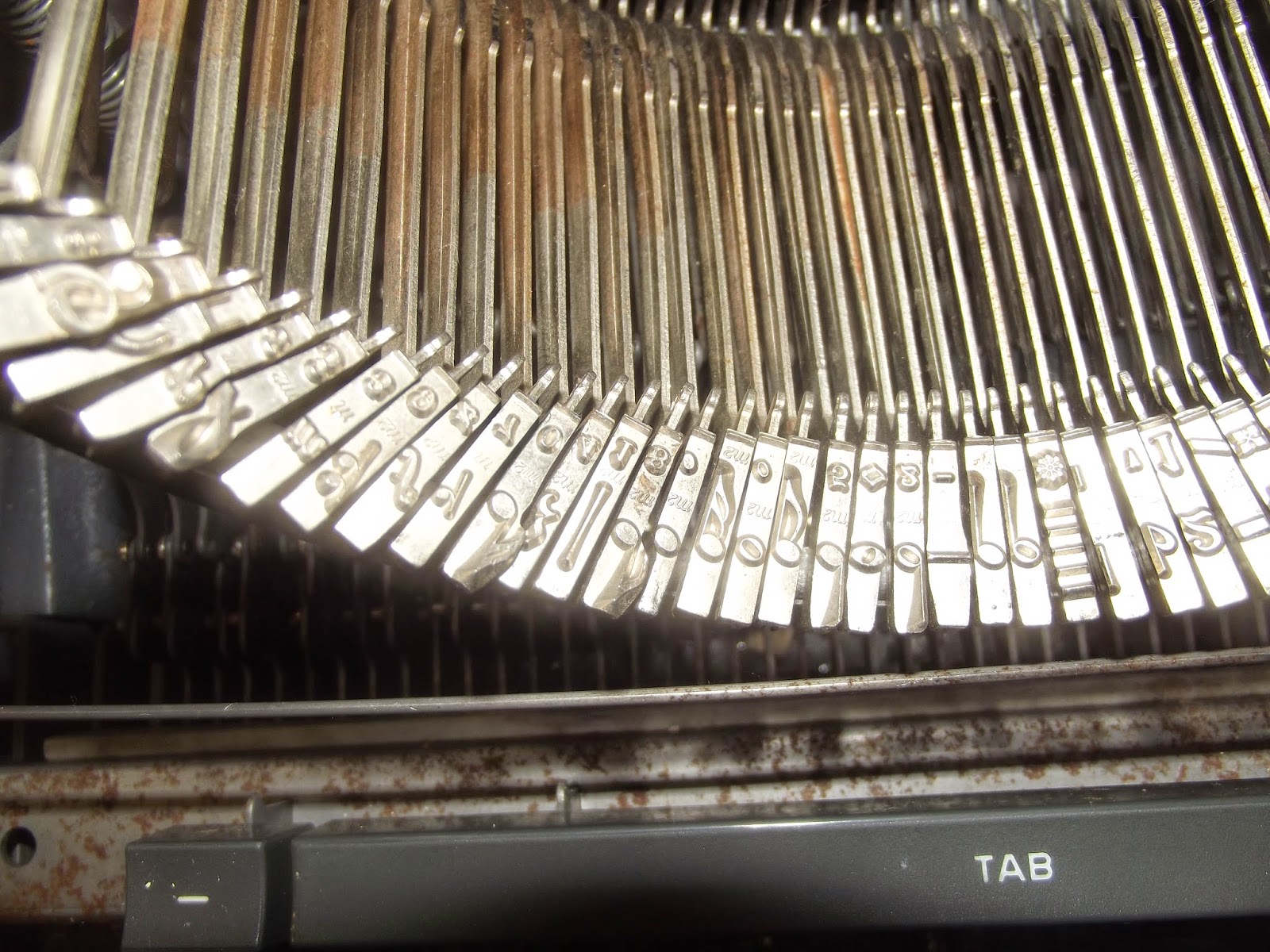 On the evening of my typewriter Pecha Kucha presentation during the Zine Festival back in March, I got chatting to two ladies representing the National Library of Australia at the event. They seemed genuinely interested in typewriters, so I told them about the Olympia Musicwriter the library held. I knew it was there, because I had been offered a brief glimpse of it on a visit to the library in 2006. 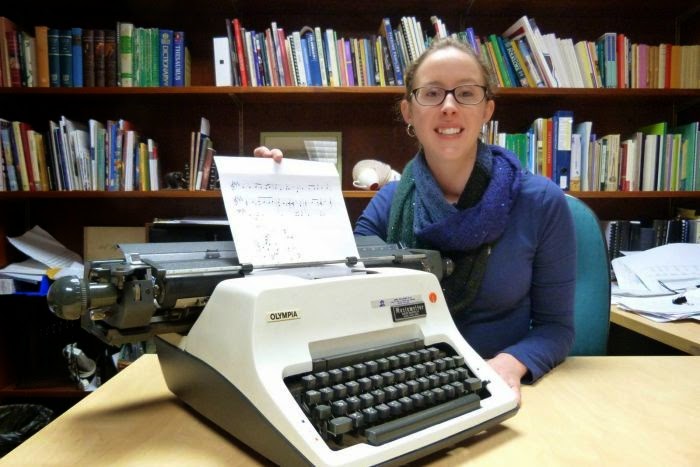 The younger lady, Kristen Gidney, from the library legal deposit and acquisitions department in the Australian contemporary publications section, took a particular interest in this and decided to take it upon herself to lure the machine out from the bowels of the library. 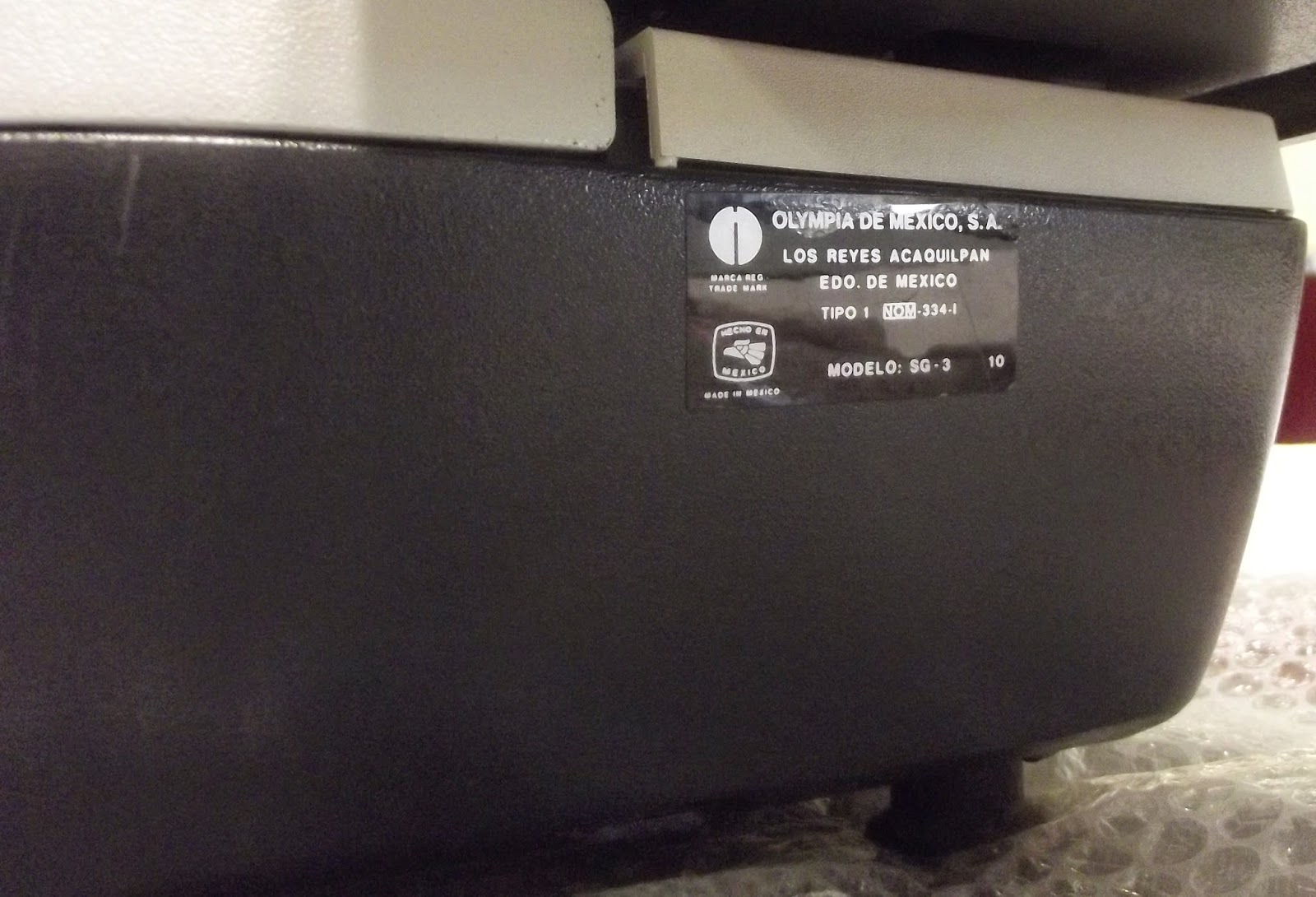 At about the same time that I viewed the Musicwriter in the National Library, in early June, I found online that the same model had been passed in on US eBay for under $35 (bear in mind these things weight more than 20kg, or 44lbs). But the one for sale in the US was made in the US. So was the one that the Powerhouse Museum in Sydney has (which the Powerhouse dates to 1980). Until I saw this Musicwriter, I was unaware Olympia had had a plant in Mexico.
The wheels of bureaucracy apparently turn quite slowly at the library and it took Kristen fully two months to track down the Musicwriter in the manuscripts and pictures section, and to get permission for her and I to have a close look at it. That viewing took another week to organise. 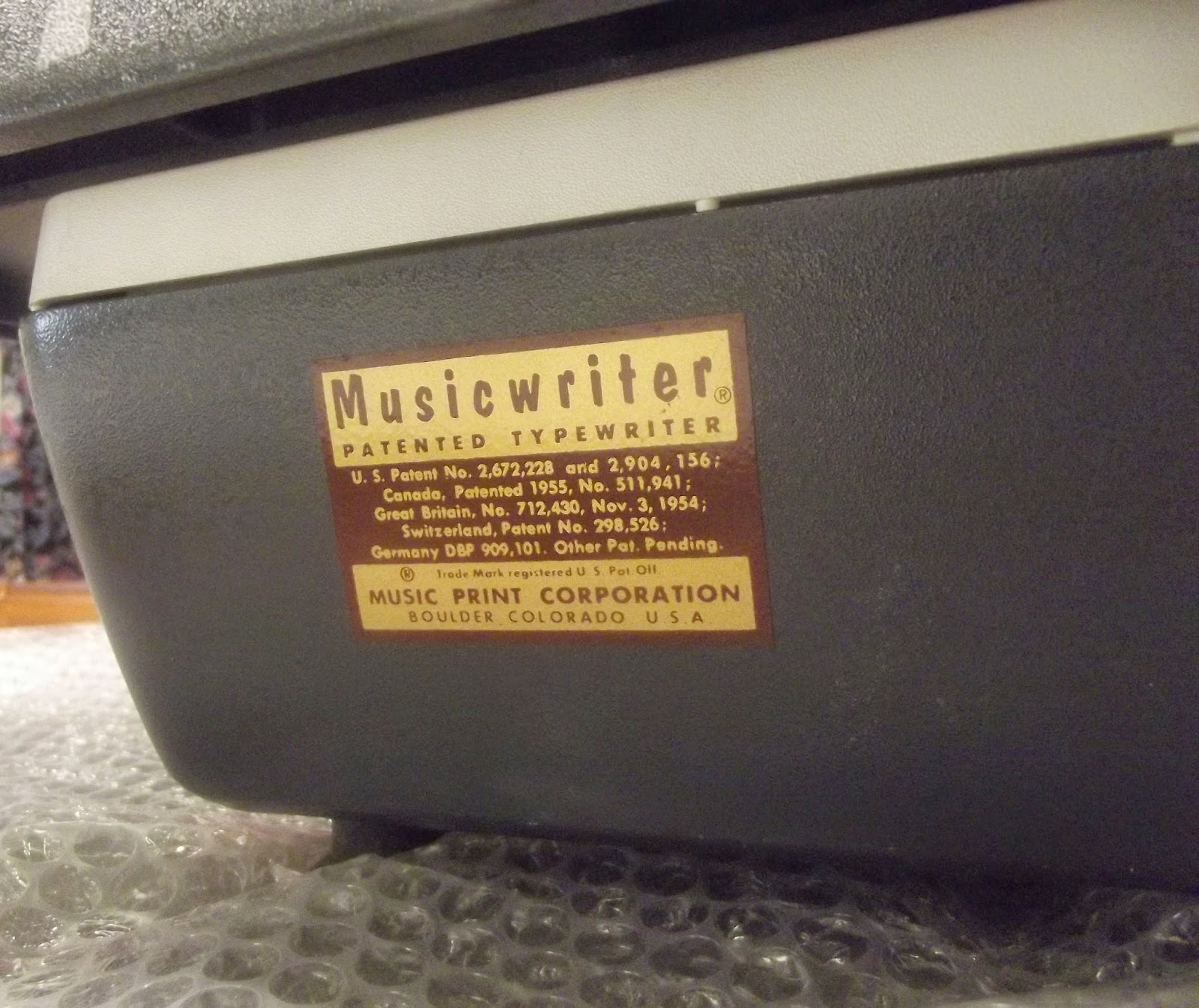 I get the impression these machines were made individually, on a one-off basis, on order to Cecil Effinger's Music Print Corporation in Boulder, Colorado. Seemingly, once ordered, the Musicwriter was then made on commission for Effinger. Effinger died in Boulder on December 22, 1990, so he was still around when these were made. Note, below, that the Musicwriter is "custom modified" by Effinger's Music Print Corporation. Does this mean it was modified in Boulder, Colorado? Seems possible. This model was sold by Admiral Office Machines of Frenchs Forest, Sydney. 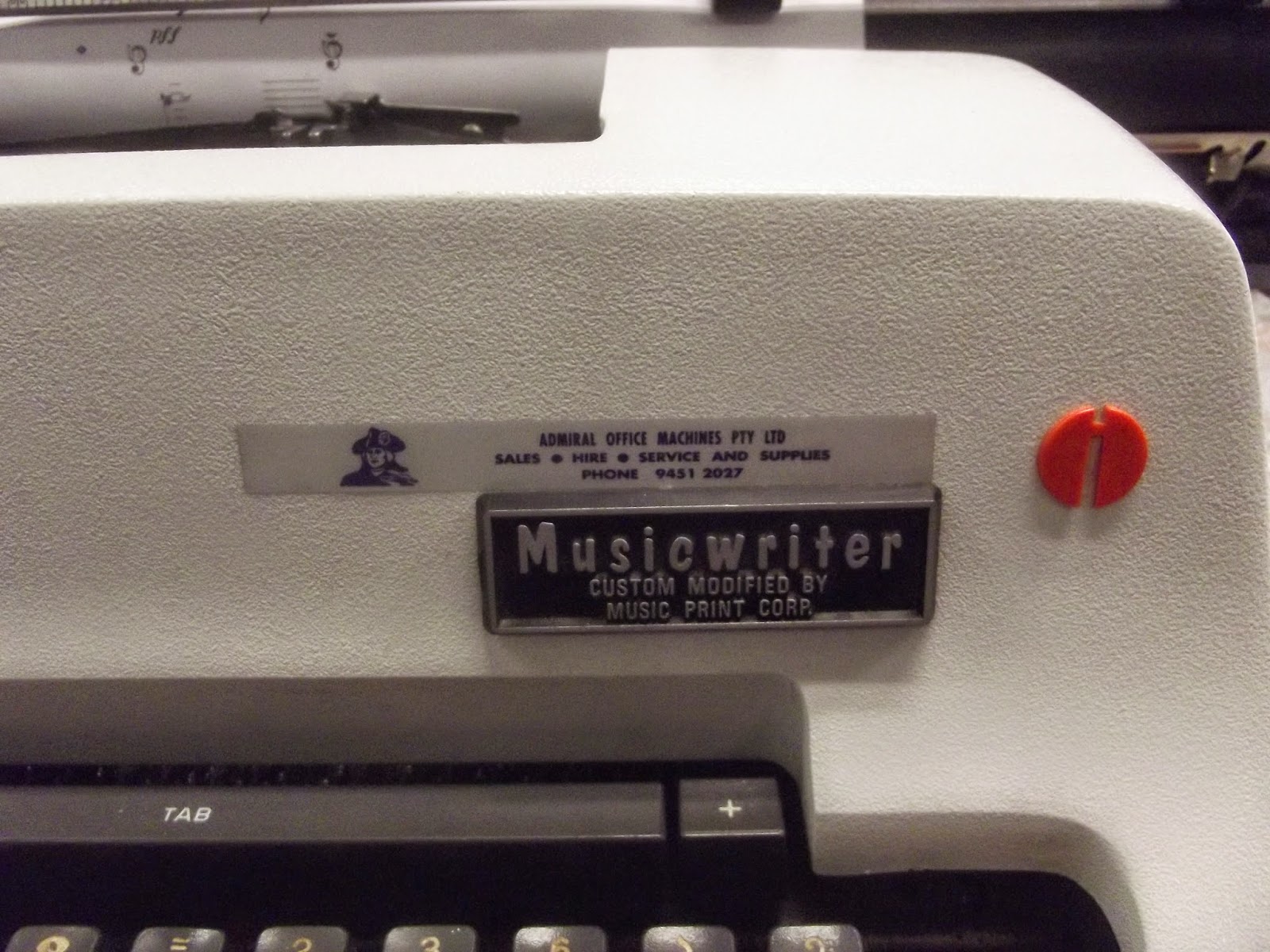 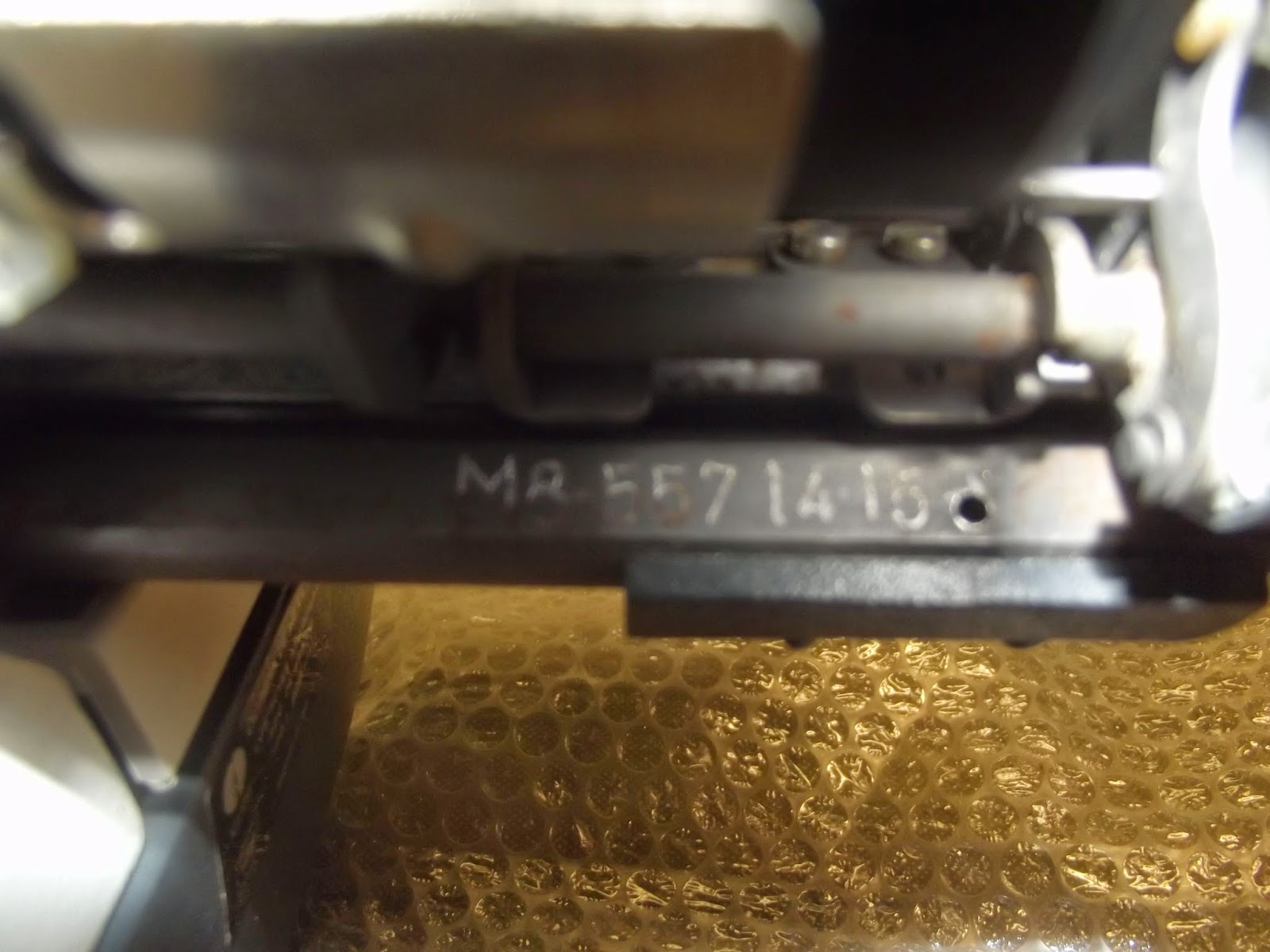 The serial number didn't offer me any clues as to its year of manufacture - M8-5571415. It's a wide carriage SG-3, and presumably "M" stands for Musicwriter. On the Typewriter Database, Javier Vazquez del Olmo's SG-3 has the serial number 7-2600617, so perhaps '8' signifies a later version? 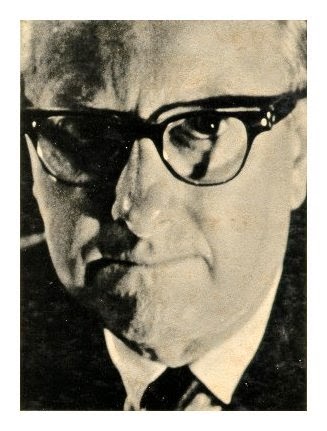 Cecil Stanley Effinger (1914-1990).
See my post on music-writing typewriters here.
In the meantime, Kristen had mentioned that the Musicwriter was being dragged out for inspection in some sort of internal communiqué. I must say it was such a pleasant surprise to turn up on the day and find so much interest in a typewriter. There must have been more than 20 staff members in the room, most of them in the 20s-30s range, all craning their necks, eager to take a good look at this example of obsolete technology. Kristen compared the scene with a "pack of puppies at feeding time". To be able to get up close to something so completely different in typewriters even tickled my own jaded appetite. I found the various modifications, and their purpose, quite fascinating. 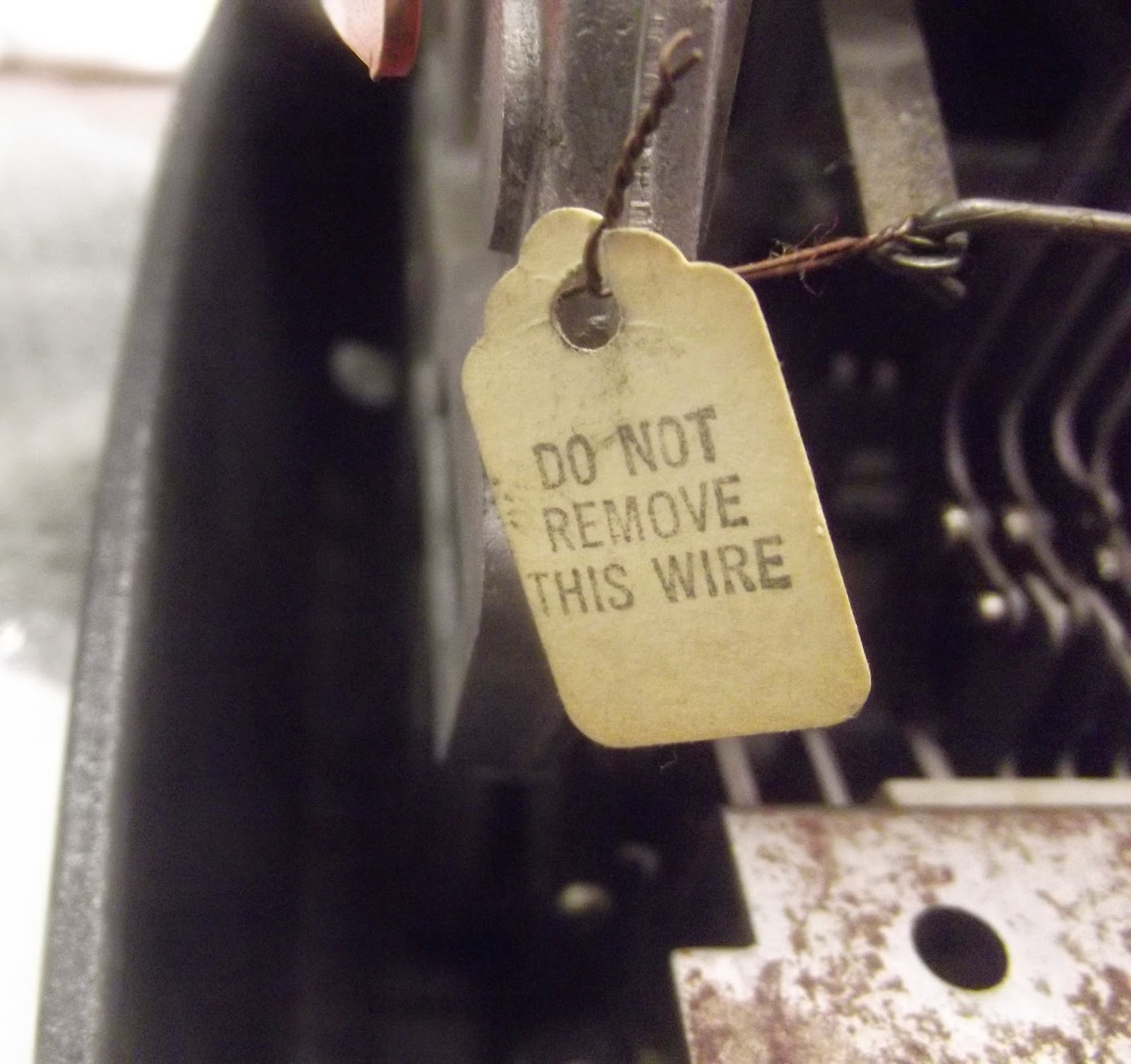 Unlike the earlier R.C.Allen version of this machine, the Olympia Musicwriter is set up to only use carbon ribbon. The carbon ribbon, of course, can only be used once, therefore this piece of wire ensures the direction of the ribbon movement is not reversed. 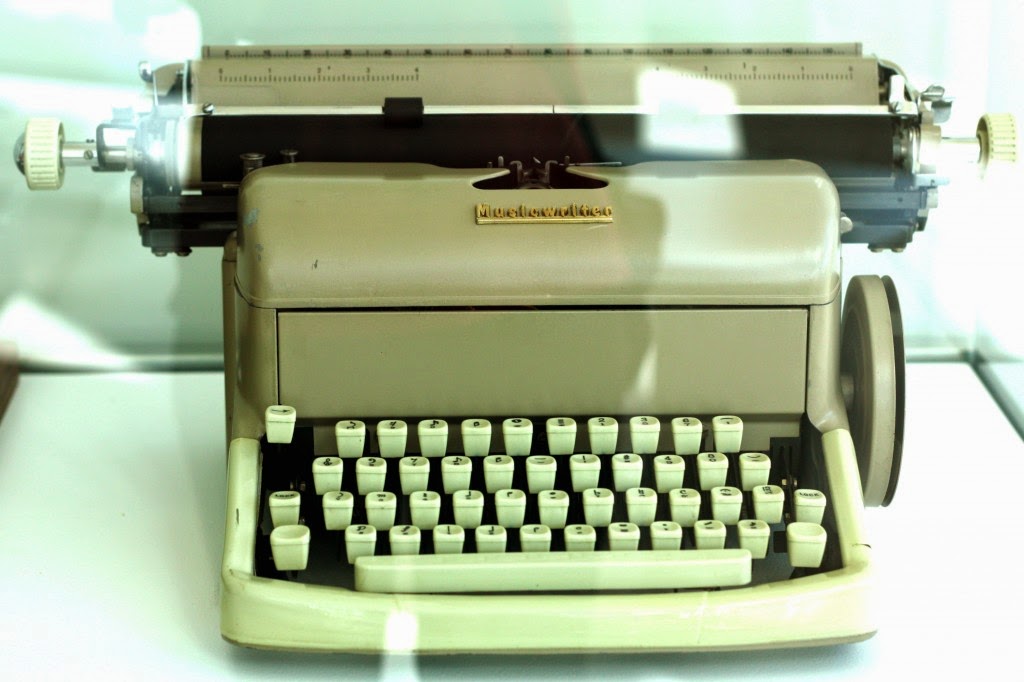 The R.C.Allen version was set up to use carbon and conventional ribbon 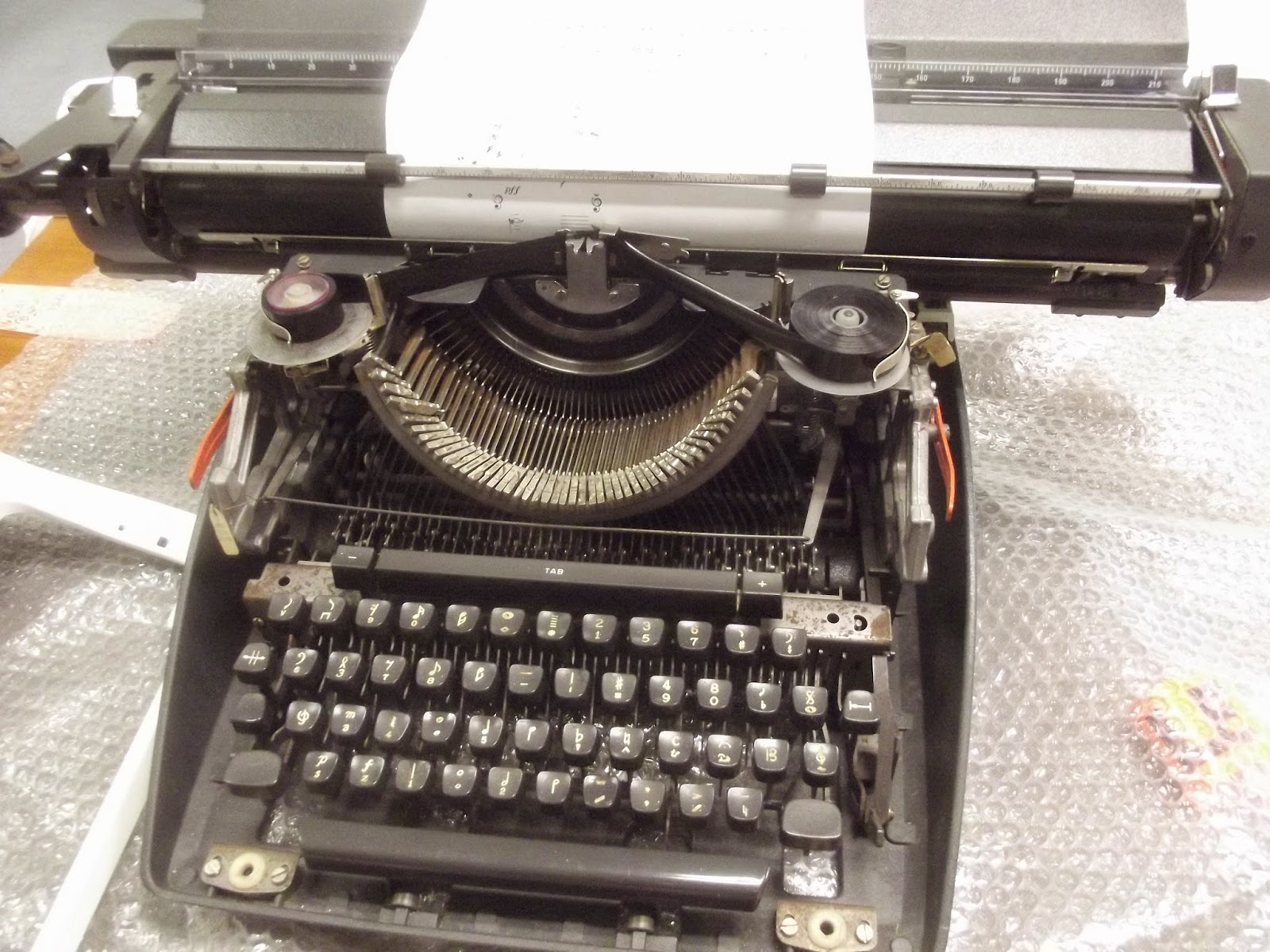 When I used this typewriter in June, the imprint was remarkably clear and crisp - I can well understand why donor Michael Wade would describe it as "engraving". To the naked eye, it was if the sheet music had been printed on a press. 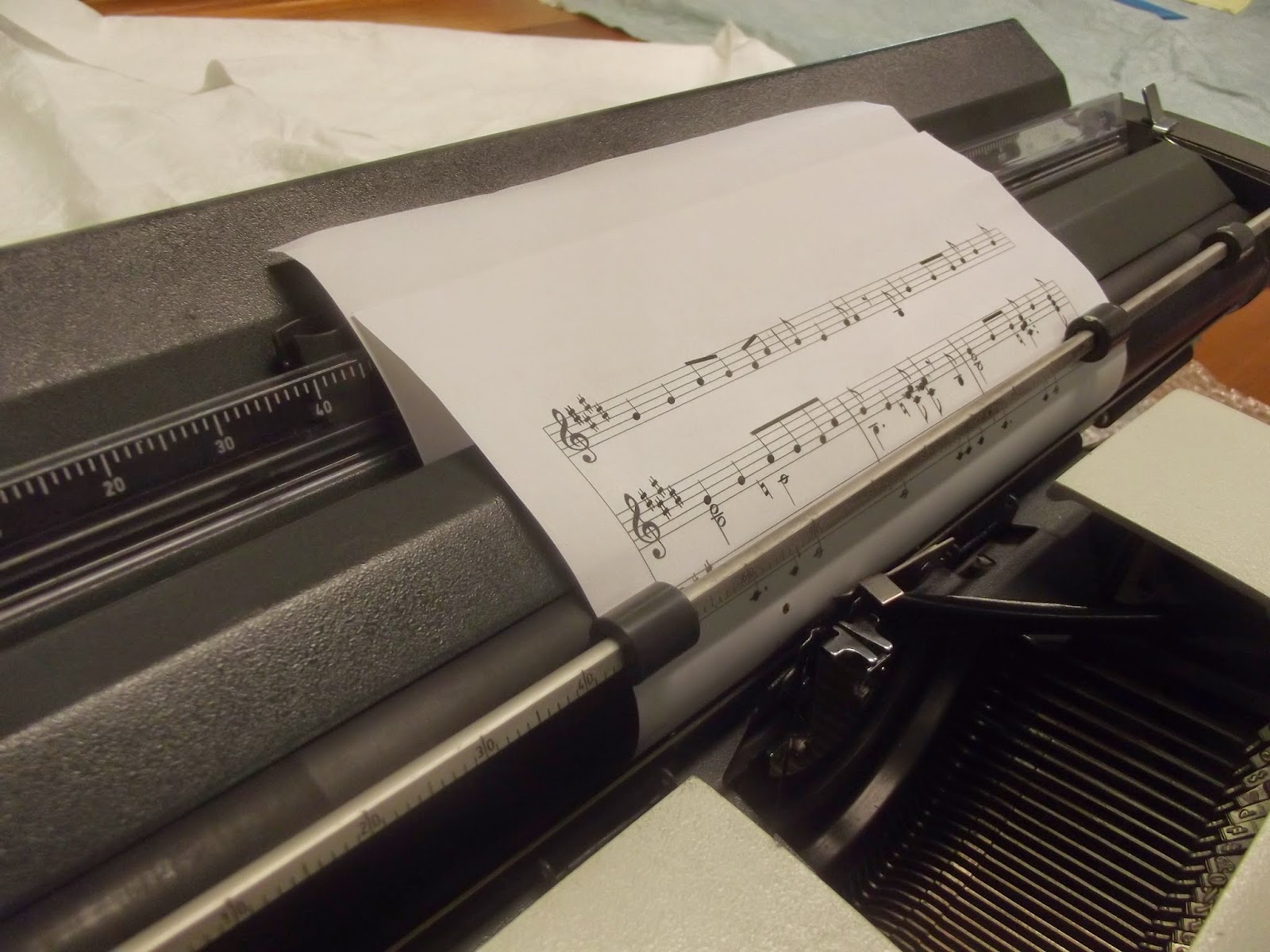 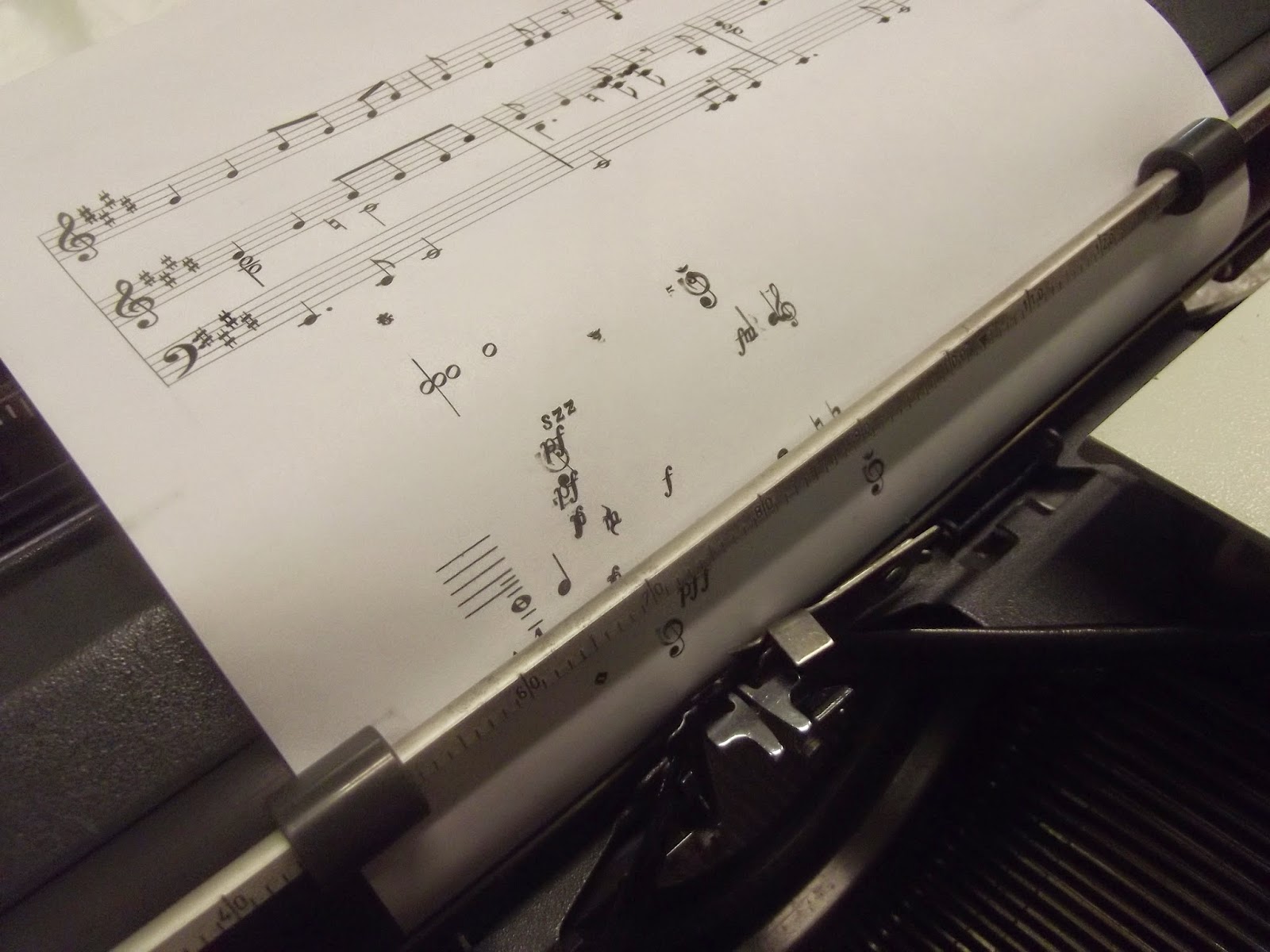 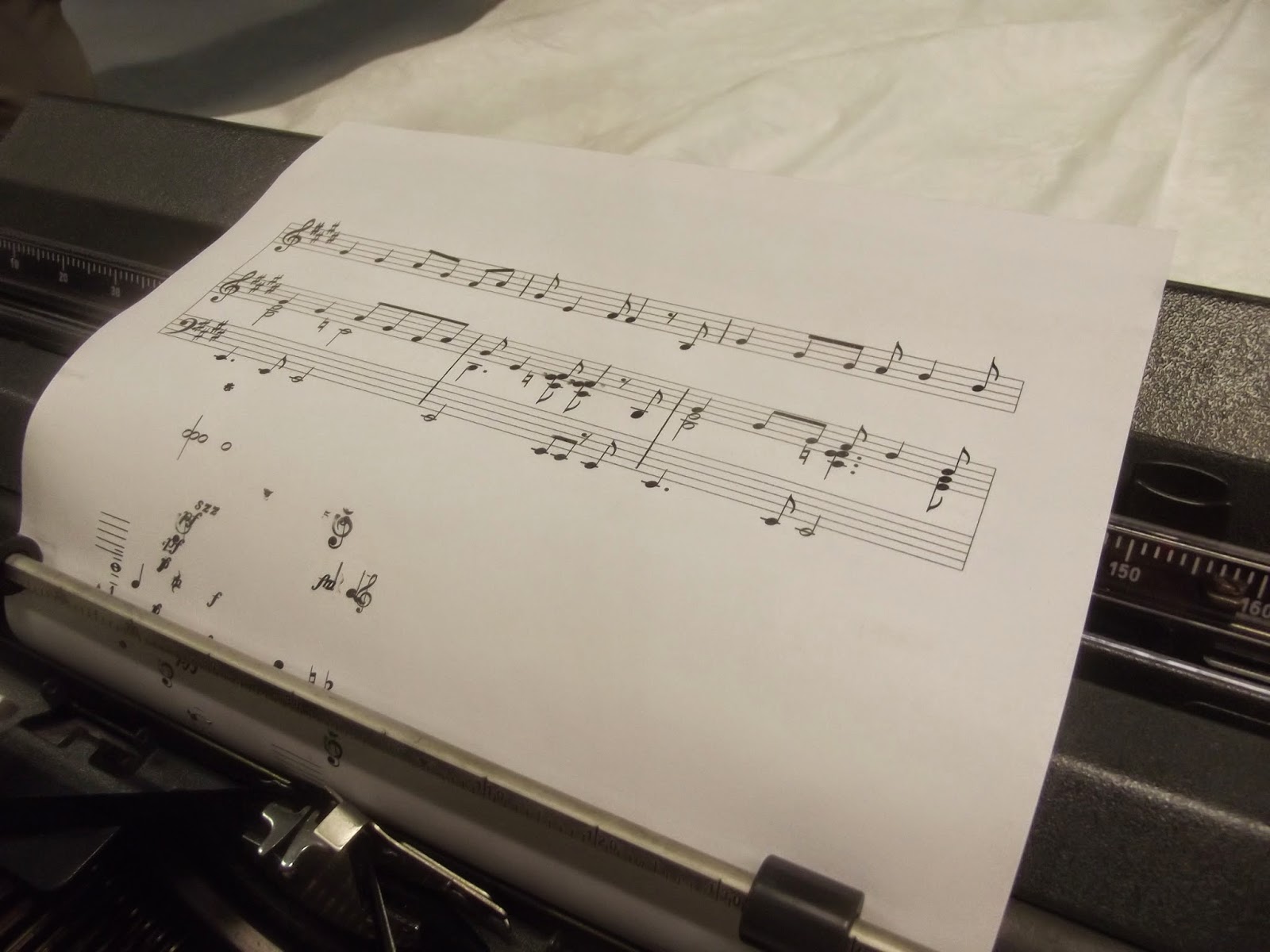 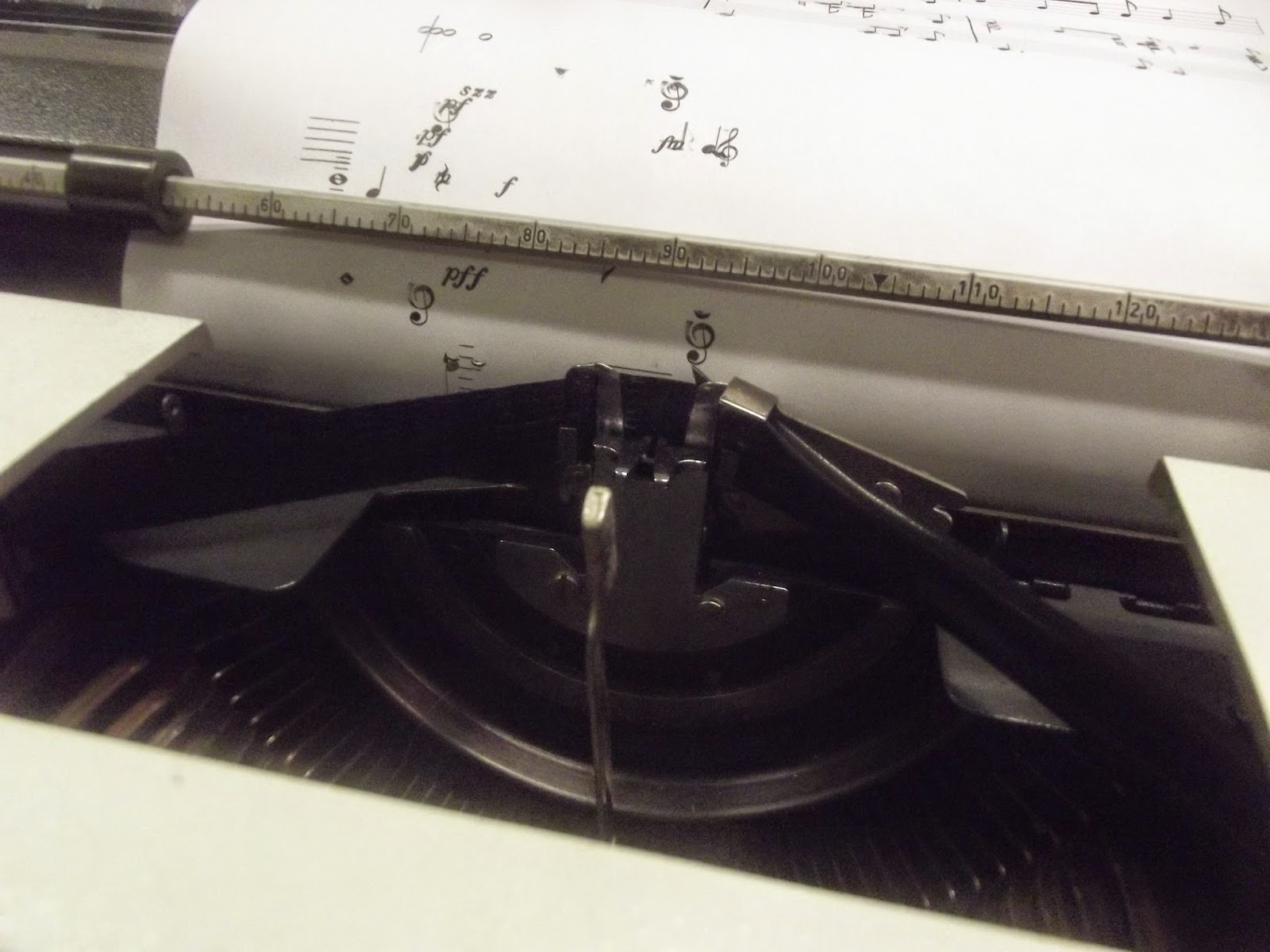 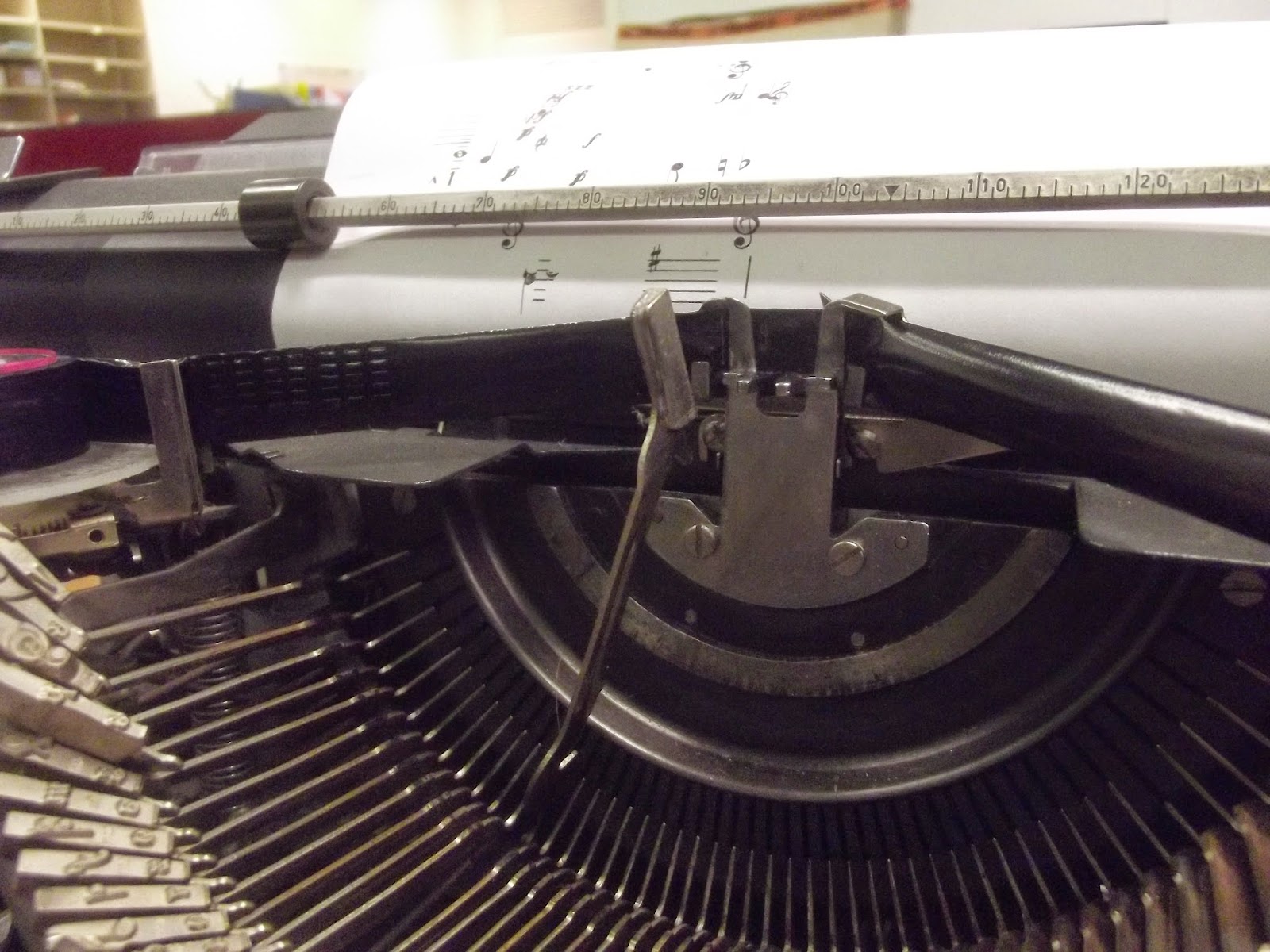 Even after the viewing, however, I still had to get permission to publish online photos I had taken of the Musicwriter. Such a rigmarole! Anyway, Kristen herself posted on the machine, on the library's "Behind the Scenes" blog. Her story can be seen here. Yesterday she was also interviewed on ABC radio about it. See here to read about this and listen to the interview. 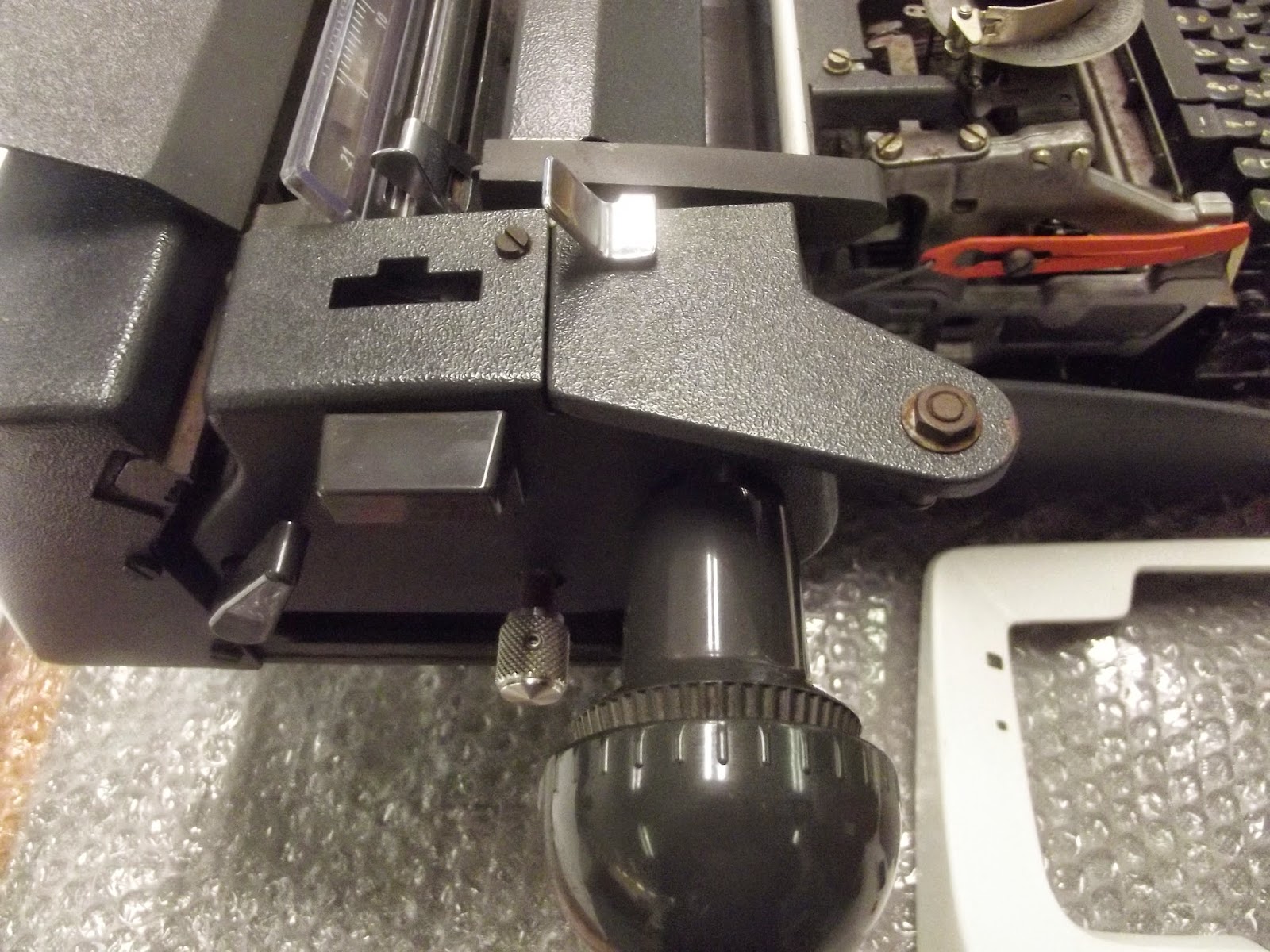 The line spacing mechanism has been disabled and the carriage lever removed. These embossed lines on the platen knob appear to give the user the only indication of the required spacing when writing sheet music. The platen must be very carefully turned to maintain correct alignment. Creating the horizontal and vertical lines must have been extremely time consuming and required considerable skill, let alone the positioning of the notes. Effinger updated his patents for "free platen typewriters" in 1968 (R.C.Allen) and 1976 (IBM). Was an IBM Musicwriter ever made? In 1968, Effinger also adapted his musicwriter patent for a "diagram typewriter". 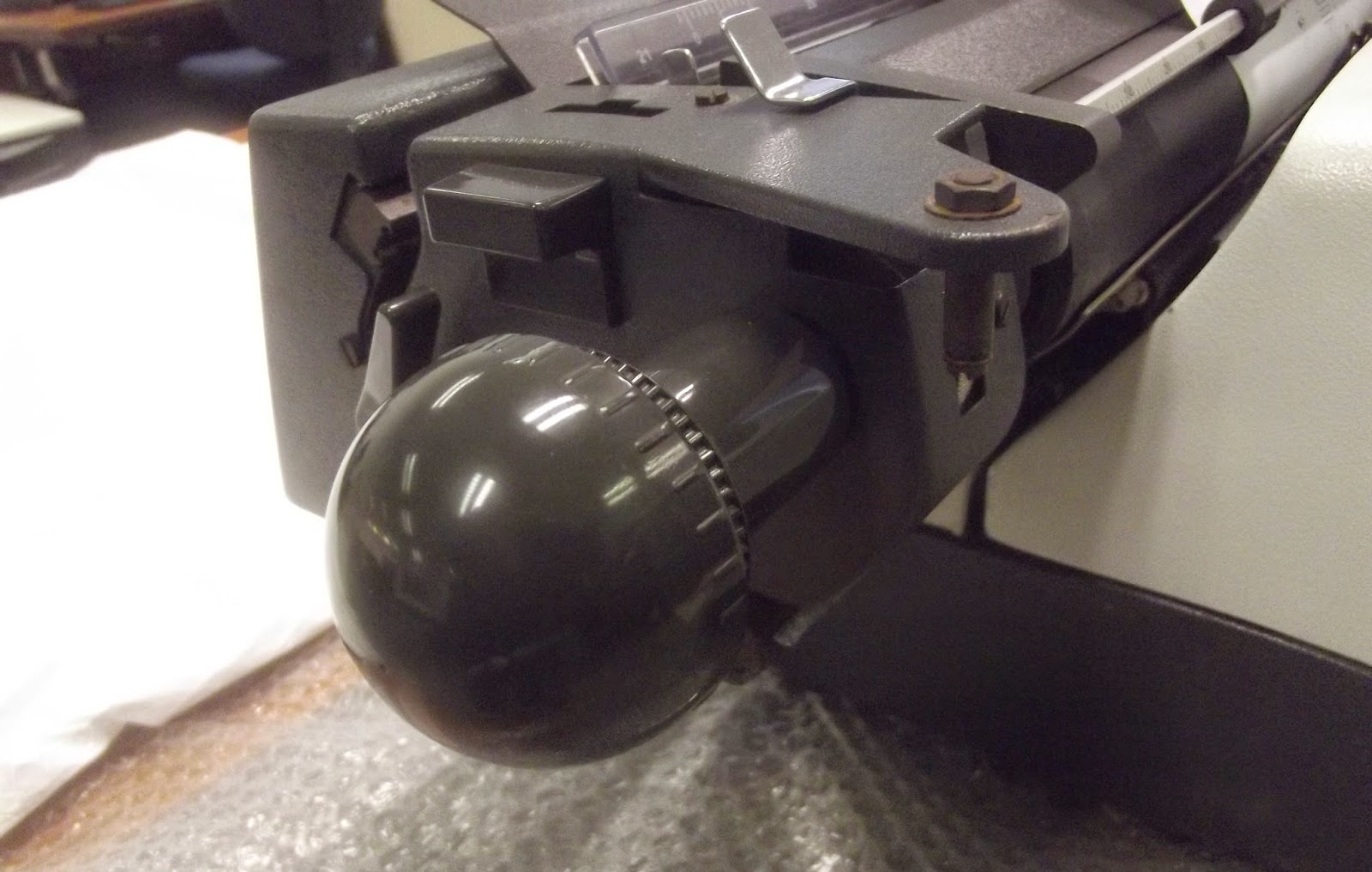 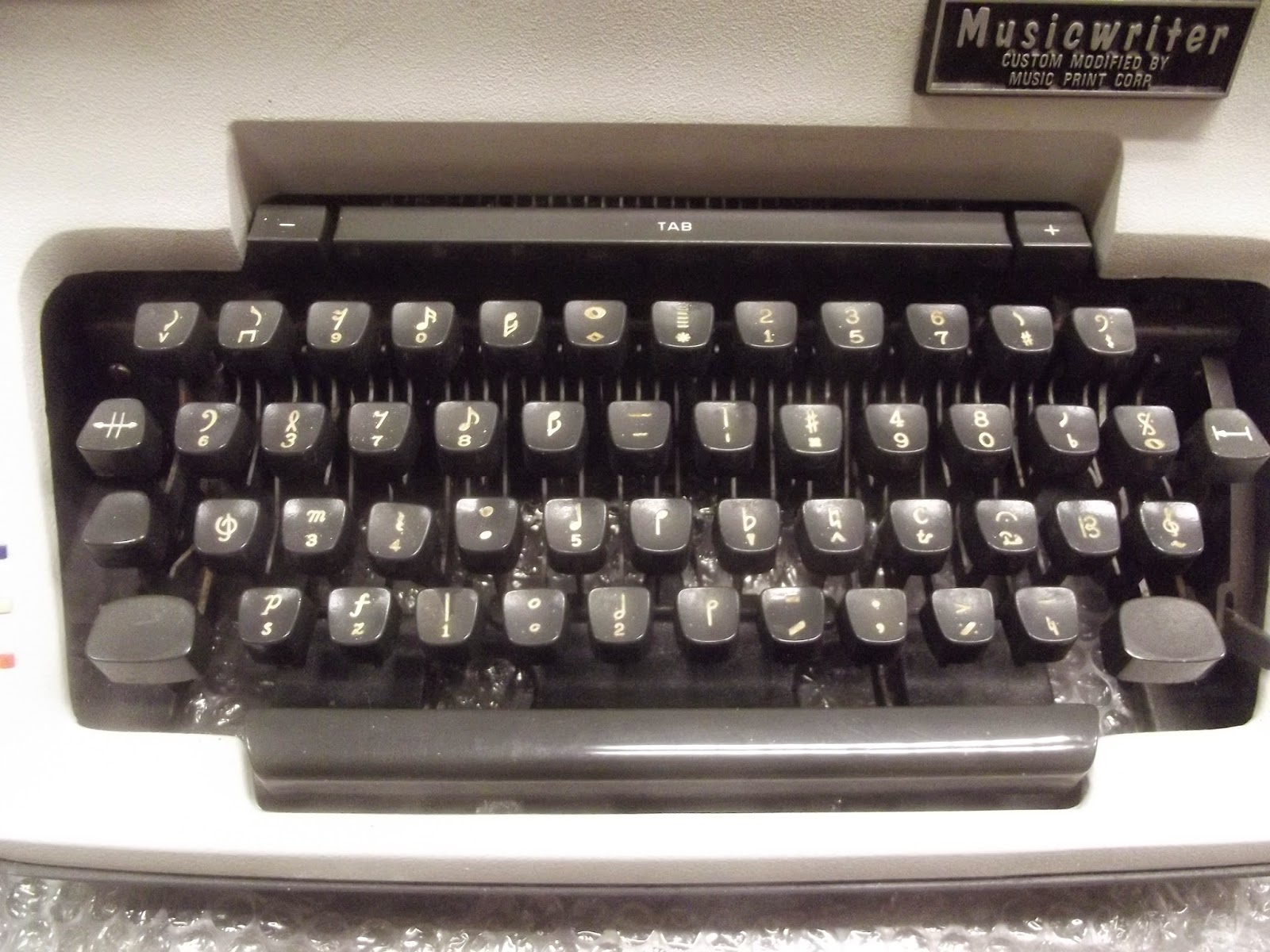 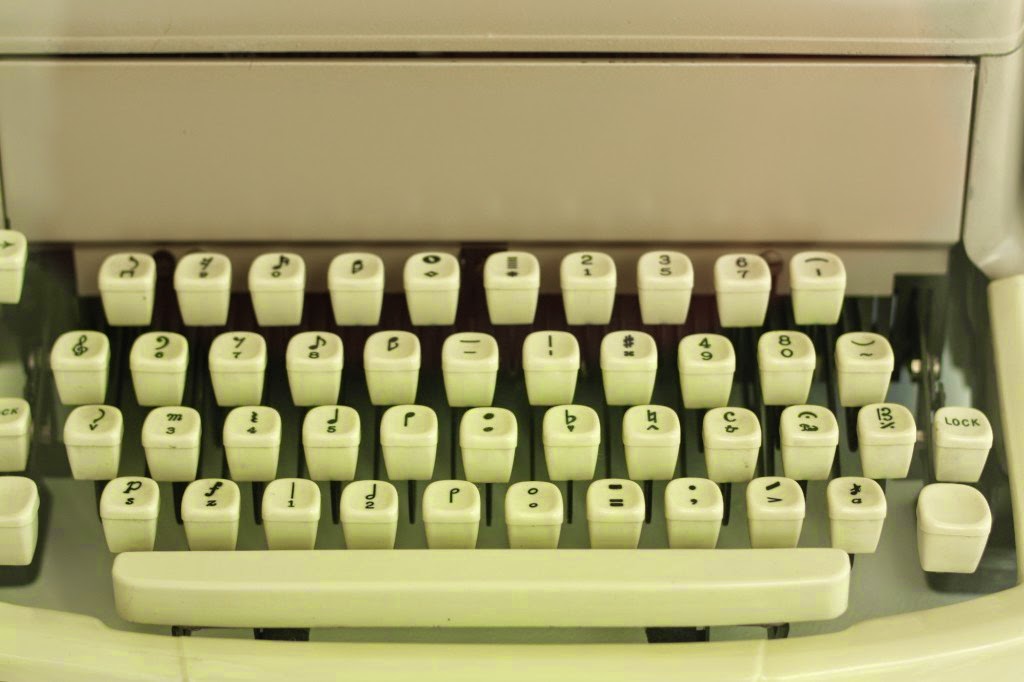 While all this has been going on, I have been trying in vain to track down and talk to the donor, Australian musician and composer Michael Wade, who gave the machine to the library in 2003. This is as much as I can tell you:

Wade was born in Sydney on April 17, 1947. In 1960 he co-founded the pop band The Ramblers, starting a career as a professional musician that spanned almost 40 years. In 1963, the Ramblers became The Midnighters and signed their first recording contract. RCA released the band's first single, surfie song Goofy Foot, written by Wade, that year. Between 1965-68, the band's basic line-up performed as Climax. Wade performed for the US Army in Vietnam in 1968-69. In 1972, Wade's exceptional technical abilities as a guitarist resulted in his appointment to the Australian production of Jesus Christ Superstar. 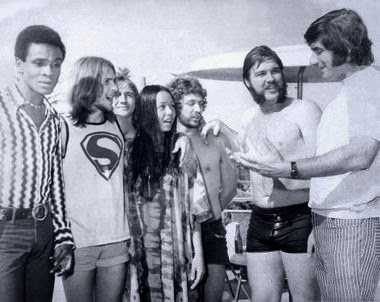 Michael Wade, third from left, with some of the the cast of Jesus Christ Superstar in Holyoake, Massachusetts, in 1971. Wade, who played Peter in this production, is behind singer Yvonne Elliman.
In 1974, the rhythm section of the band Wade led for JCS formed itself into the band Baxter Funt, which regularly backed Marcia Hines at the start of her career and provided musical backing for Reg Livermore's stage shows, such as Betty Blockbuster Follies. Wade was also musical director, arranger and conductor for the stage show Hair in 1977-78. During the 1980s he operated his own studio in Bondi and worked as a sheet music arranger-engraver. His use of computer music in the rock opera Rasputin made him an Australian pioneer in the field. In the 1990s, he worked as arranger, composer and musical director for various corporate events and in 2001 began writing semi-autobiographical fiction. 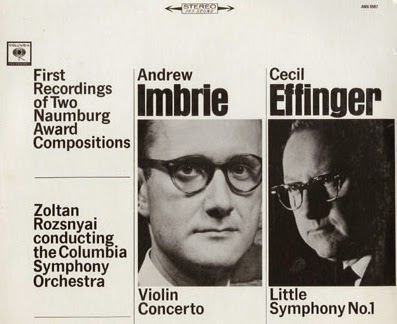 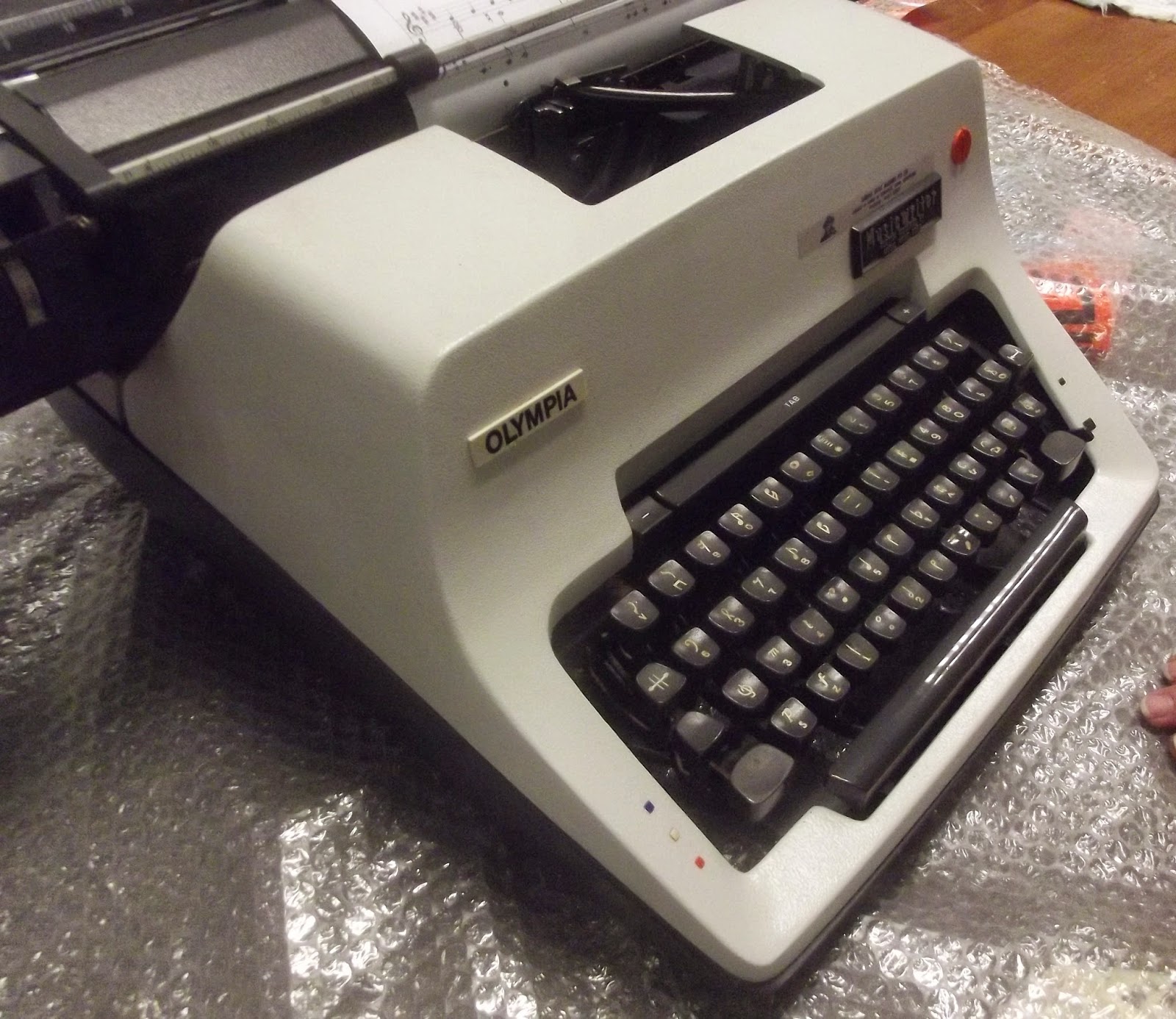 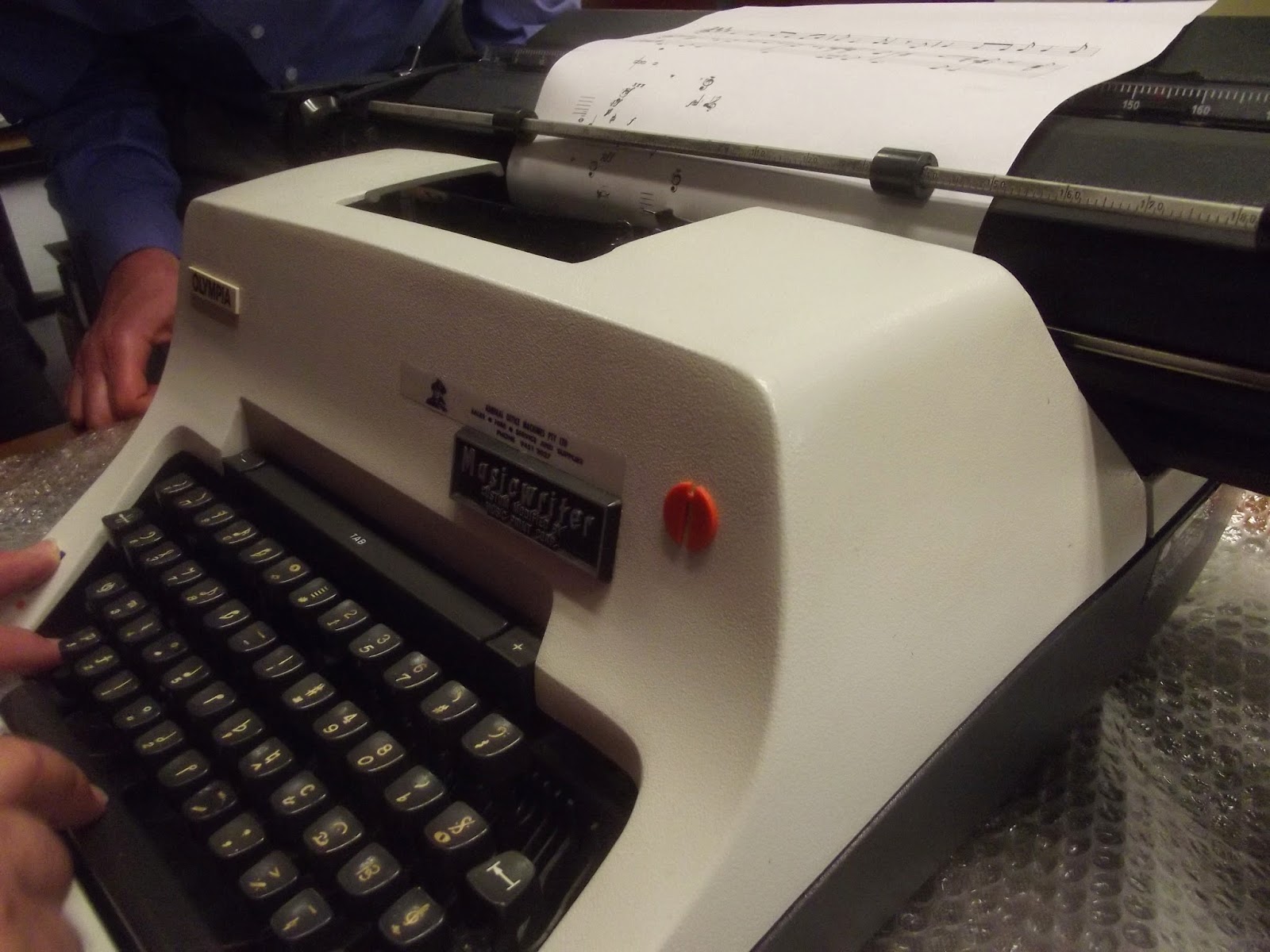 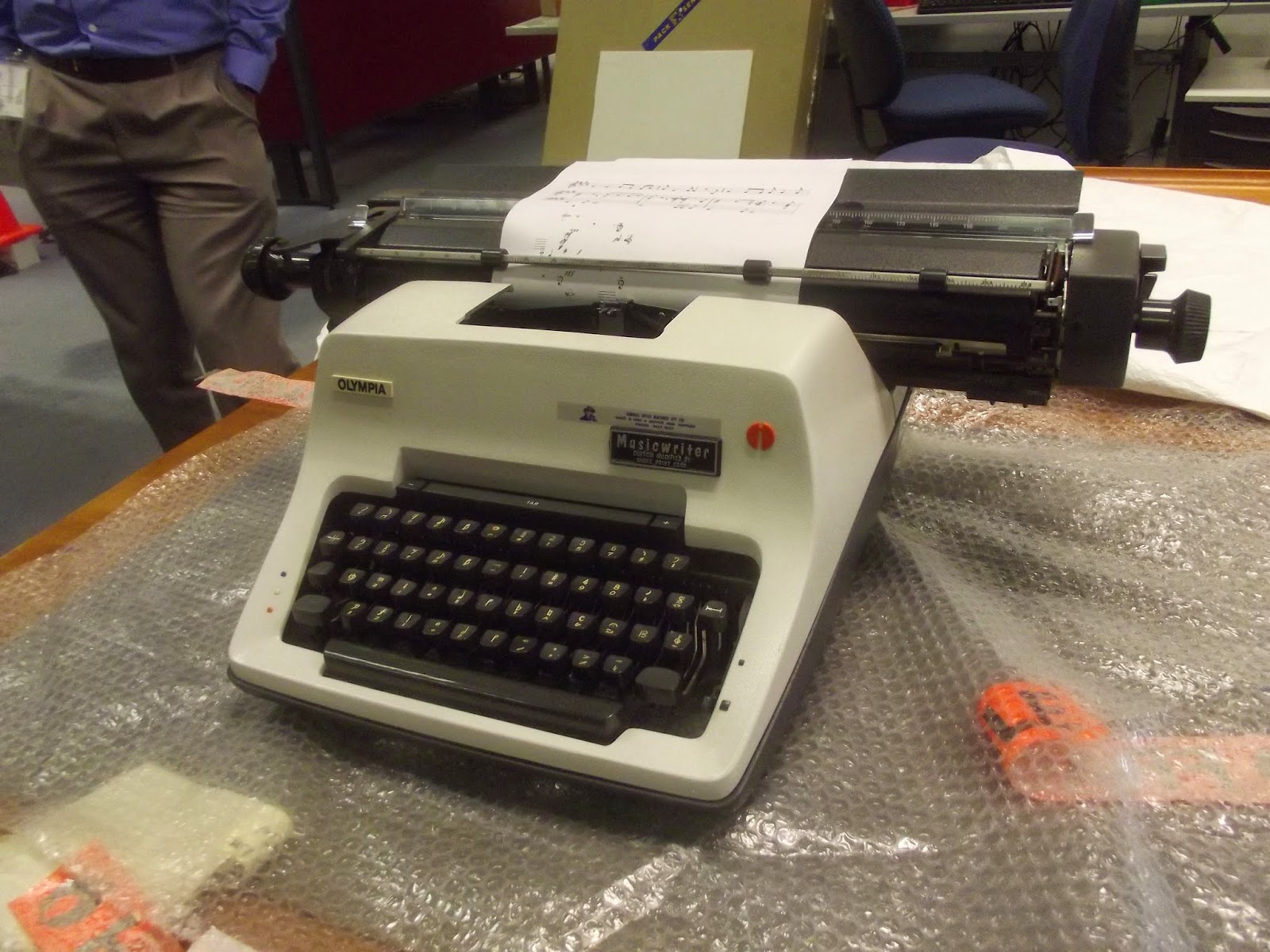 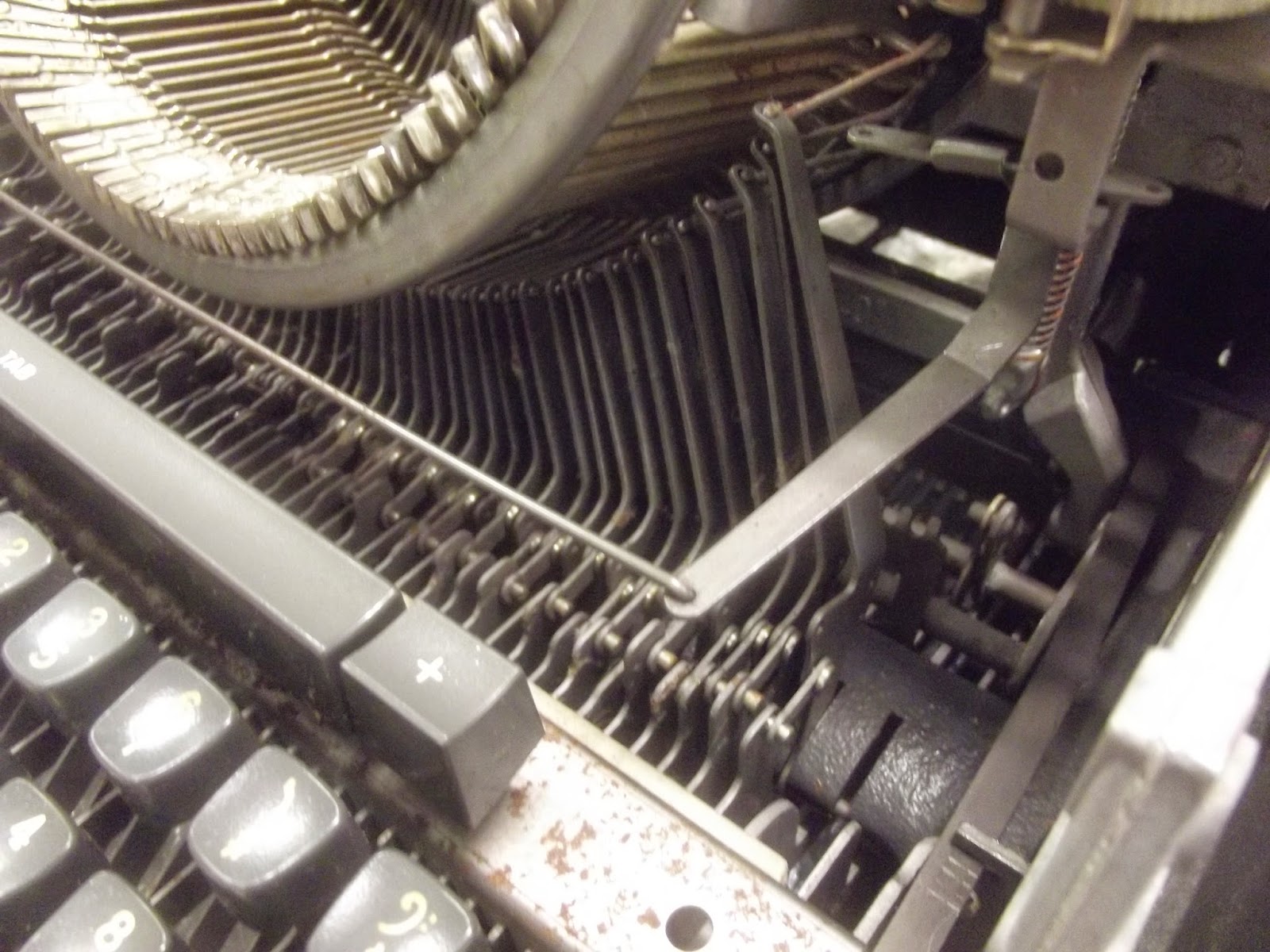 My take on these Musicwriters is that they were specifically made to individual orders. Someone who wanted one approached Cecil Effinger's company, which would then commission one to be made. There wouldn't have been too many customers – given the design and the Effinger modifications, these typewriters had but one function and one function only, to write sheet music. That being the case, to want one, and to get Effinger to commission one to be built, meant the cost would have been quite considerable. And who is going to buy one now? Quite apart from the very limited use one could put such a machine to (and the skill required to operate it efficiently), the considerable weight means shipping them around the world would be massive on its own.
Posted by Robert Messenger at 10:34

VEry interesting type----musicwriter. I've seen a photo of a real old one. This is the first I've ever seen a newer one or one being used. Very intersting machine. Thank you for the post.

The Olympia SG-3 was a very popular machine in Mexico. It was made here from the early 1970s until the mid- or late-nineties; I have one with 21" wide carriage that was still disassembled in its original cartons when I bought it. Very nice machine to work with.

The Olympia factory was located in Los Reyes La Paz, near Mexico City. This factory produced SG-3 models to be used mainly in all levels of government: from post offices to hospitals and state agencies and everywhere in between. The earlier models, made in the mid-70s, included a plate riveted to the base that read, "homologated for use in the Public Sector".

Even today you can see Mexican SG-3 typewriters in many offices. My local post office still has one, and not long ago I saw a batch of these big old reliable machines working hard keeping patients records in a hospital. It's nice to see that this model was adapted to such a specialized use, and nicer still to see that Made in Mexico label on it.

BTW, judging by the Olympia logo on the front cover (a plastic piece riveted to the metal case, instead of a painted stencil as in my machine) I can tell that the Musicwriter was made in the mid-1980s or so.

I bought a Music Writer on eBay just a few weeks back. It came from Toronto. I have only just begun to explore its use, and bought a case of the carbon ribbons shown at typosphere.blogspot.com from Michael Holt.

It's a machine that excites even people who don't know typewriters or music. But I have to say, as a composer, this is going to take a long time to master. It is very much like music engraving, in terms of plotting the spacing of staves, notes, and every other element. My years on Finale spoiled me!

More information, including some of the original manual, are available here (http://www.musicprintinghistory.org/music-typewriters/39-musicwriter.html). Thank goodness I found that site, or I would have wondered if my Music Writer was broken!

Hi, I'm the Michael Wade in your Musicwriter article (but not the one in the photo with Yvonne Elliman). If you'd like to ask me anything about it, you can email me from my website national obsession.com.au.

HI there we own one of these! Really curious as to the history and if there is anyone out there who would care to purchase it from us!