Was a national day of mourning declared in Mexico on Thursday, December 11, 1958, the day its former "king", William Archer Parker, died in Waco, Texas, at the ripe old age of 88?
Well no, actually. When one goes looking for Mexican royalty, there isn't a lot to be found. Just a couple of 19th century emperors, and that's about it. Oh, and I rate Miguel Ángel Chávez Silva pretty highly, too. A while back Mr Bojangles did ask about Mexican royalty and "high" society on Yahoo!, and got the answer, "Cheech and Chong".
So what about Smokin' Bill Parker?
It turns out the "long, lank Kentucky youth" was no mere figment of the fertile imagination of the advertising department of the Oliver Typewriter Company in Chicago, Illinois. He really did exist. And to prove it, here's his passport photograph from 1919, with his wife Bertie Ellen Blanchard Parker: 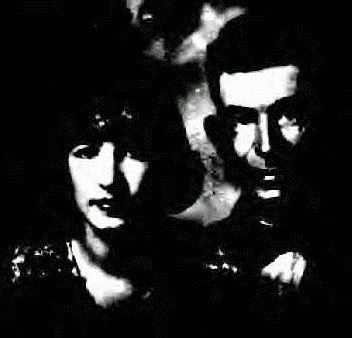 In 1911, Oliver's ad men would have had us believe that Bill Parker became a king in Mexico. Well, a Typewriter King, anyway. Same thing, no? 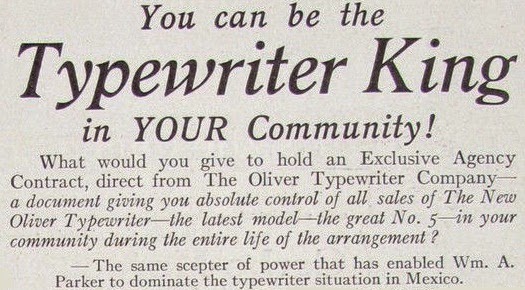 "You, too, can be a king ... just promote Oliver typewriters" - which surely must make Marty Rice the King of Jonnstown, Pennsylvania. 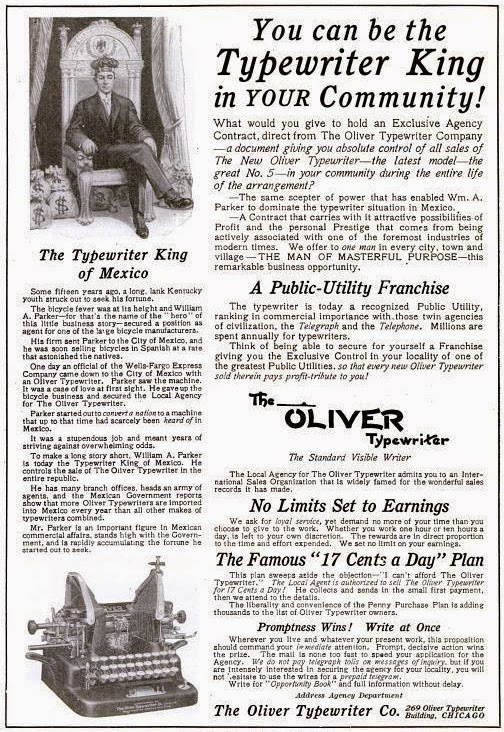 William Archer Parker was born on October 25, 1870, in Parkersville, Kentucky, and grew up on a farm at Bishops Mill.  For a monarch, he came from fairly humble stock - his father, Joe, was a commoner who worked the land.
He may not have exactly become a real king in Mexico, but Bill did well enough there. In 1926, the United States Government took its Mexican counterpart to the General Claims Commission chasing $39,000 and five cents it reckoned Bill's company, Compaňia Parker SA, was owed. See here for details:

Bill took up residence in Mexico City in 1897 - he was hardly a "youth" at age 27. After taking on the Oliver typewriter agency, he formed his own office supplies company on December 8, 1911, and returned to Waco three years later. 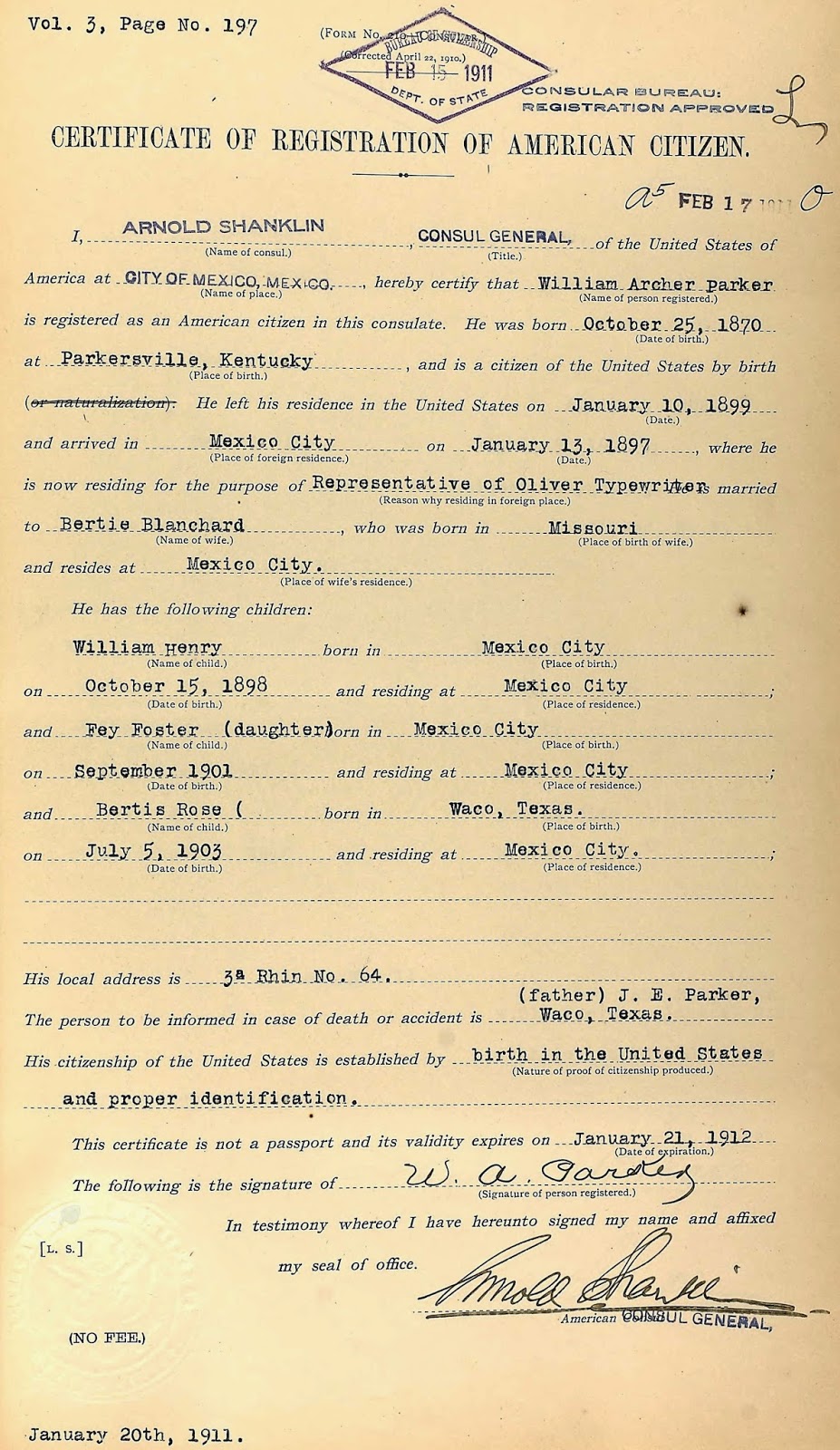 Thereafter he ran the Mexican concern from Texas: 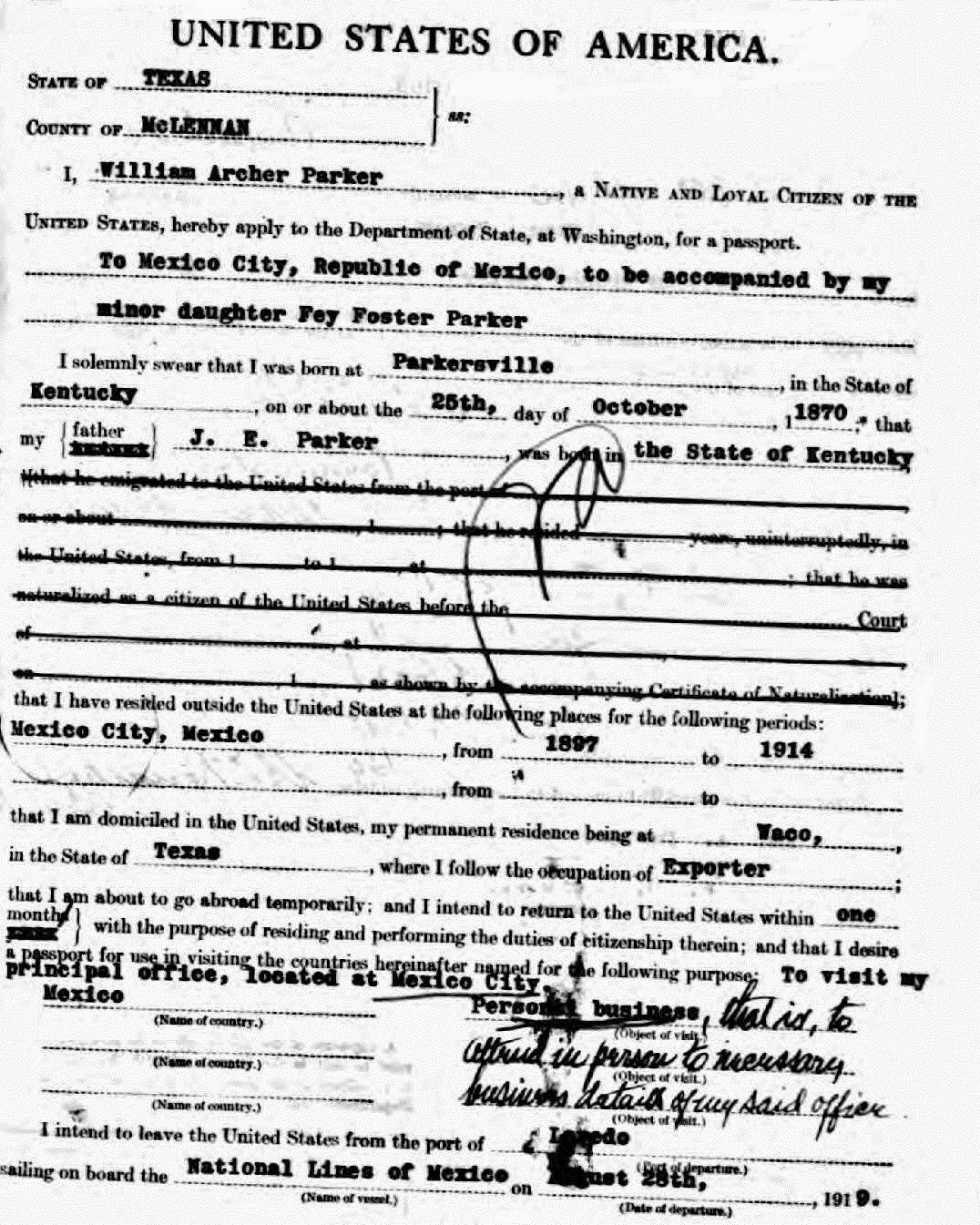 It was still trading under its original name in 1922. But in 1919 Bill had set up another Oliver distribution company, in San Antonio: 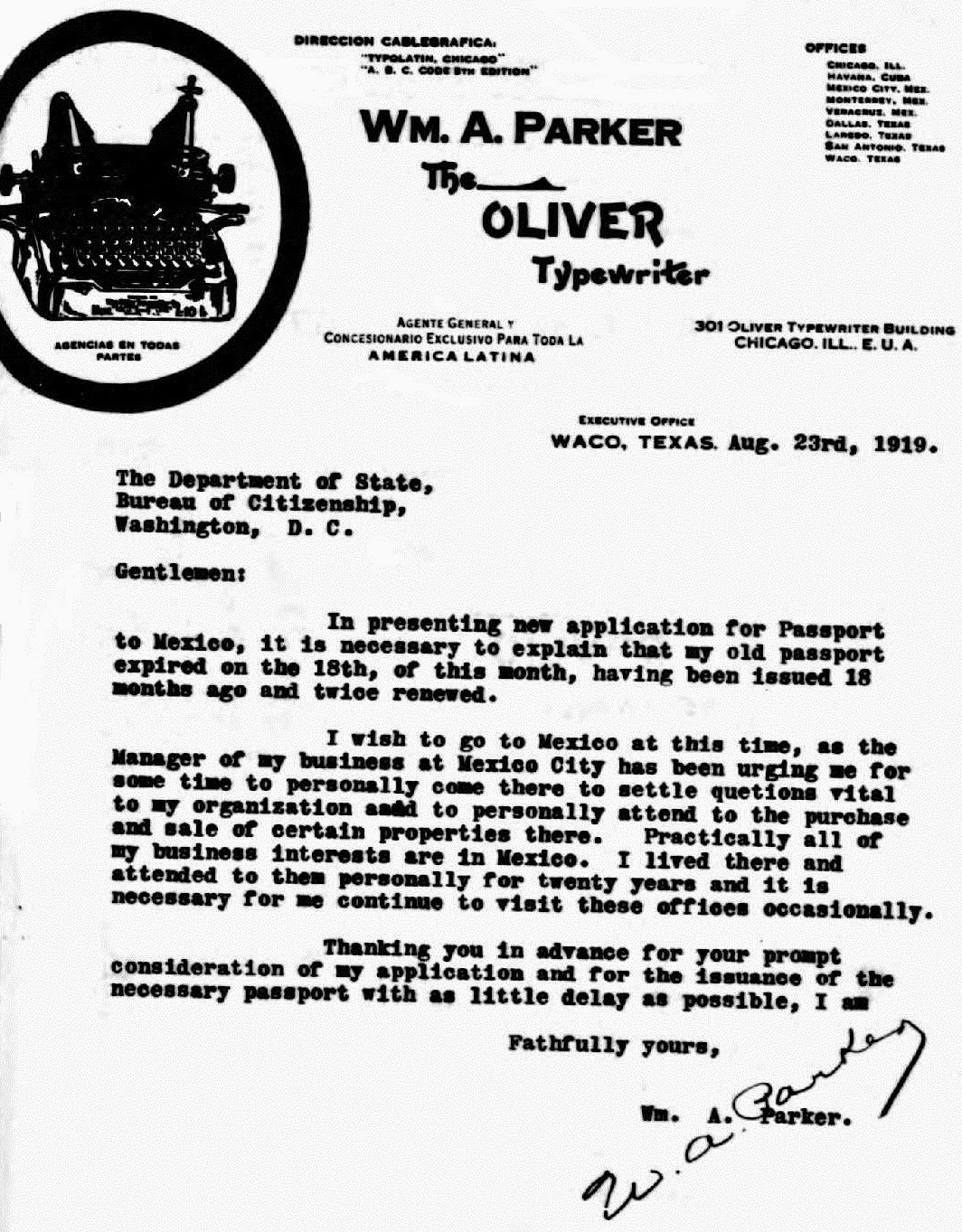 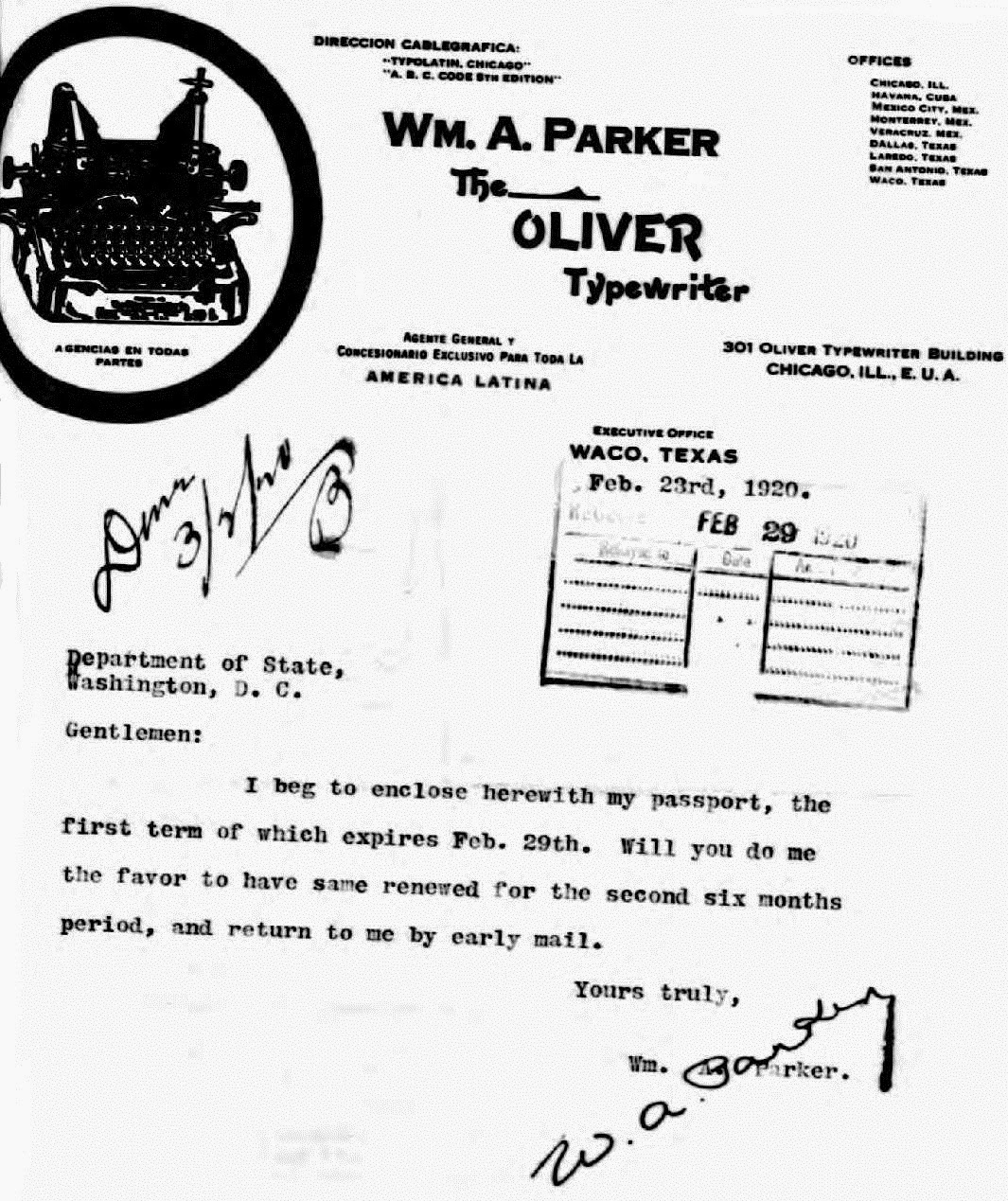 One of the Olivers which presumably was sold in Mexico by Bill Parker is this truly magnificent 1912 beast in Richard Polt's collection: 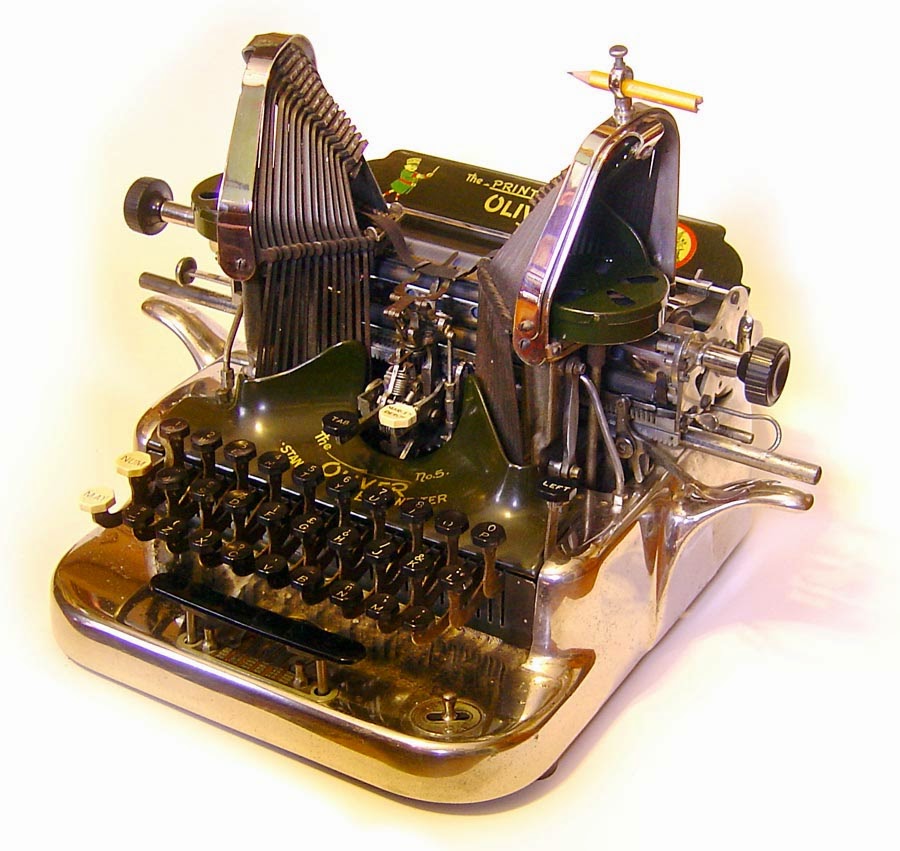 Richard also has one of the Mexican L-12s from 1923. The name William A.Parker can be seen on the front plate: 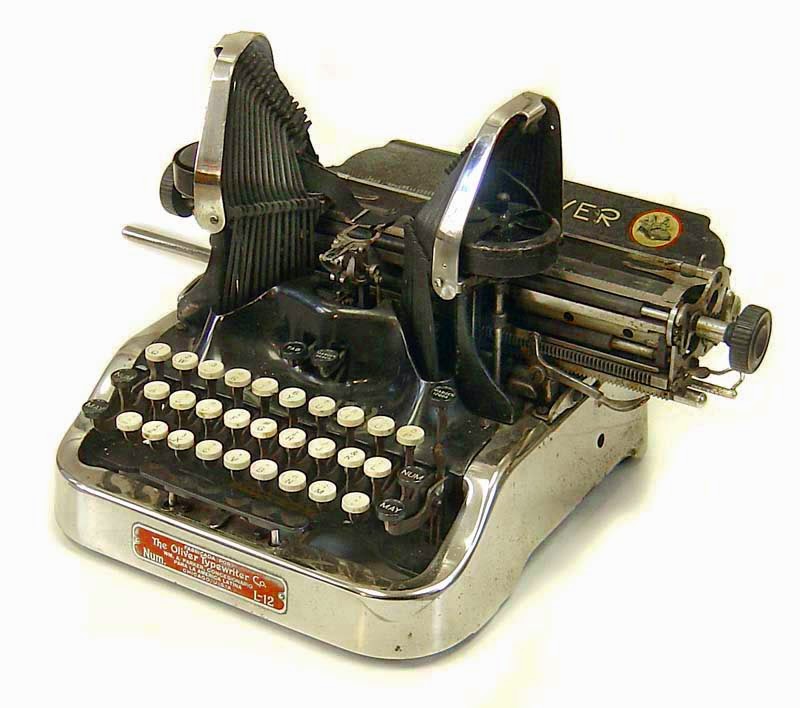 Thanks! It's good to have more information about the King!

Thanks, Robert! Yeah, we tend to get rid of our emperors rather quickly.

- He arrived in Mexico during the later years of the Porfiriate, the period spanning 30 years when president Porfirio Diaz, a former general of the army, ruled the country with an iron fist clad in a velvet gauntlet. This period was of marked and long stability, but also of marked social injustice and inequality. During the Porfiriate, many foreign companies were invited to invest in Mexico: railroads, electricity, and apparently typewriters, too.

- Parker formed his office supplies company when the Mexican civil war was starting to gain force. Diaz had been ousted from power in late 1910, and a new president, Francisco I. Madero, was struggling to create a new government. It was no easy task, after literally setting the country in fire against Diaz and being a direct or indirect cause for the rise of many rebel and revolutionary armies all over the country. During the years 1911 - 1915 or so, things became really dangerous in Mexico, with one revolutionary faction going after another in a constant struggle for power. No wonder Parker returned to the States in 1914, deciding to run his company from Texas; things must have been very dangerous for a "gringo rico" in a country consumed by civil unrest.

The claim filed by the American government against Mexico indicates me that at some point, Parker's company must have sold typewriters and services to (one of) the (many) Mexican government(s). But being, as this was, a period of constant upheaval in the Mexican political scenario, it's no wonder that many service providers were left unpaid. As a matter of fact, it would take years to fix all the old claims against the government. I can almost swear that this was the case with Parker, and as we see it took him several years to get paid (the Mexican revolution officially ended in 1921, but it was only the armed stage of the conflict; we would continue having a semi-military government, run by ex-revolutionary generals until the late 1940s).

Something interesting I've found regarding the Mexican Oliver typewriters: apparently they were NOT sold here in the original olive green paint, but they had the base nickel-plated. And they had a very ingenious mechanism for the special Spanish characters: in the L-12, the key used to print the accent is a "dead" key when used with the FIG shift (for the accent), but the same key is "live" (it causes the carriage to advance) when used with the CAPS or without any shifting.