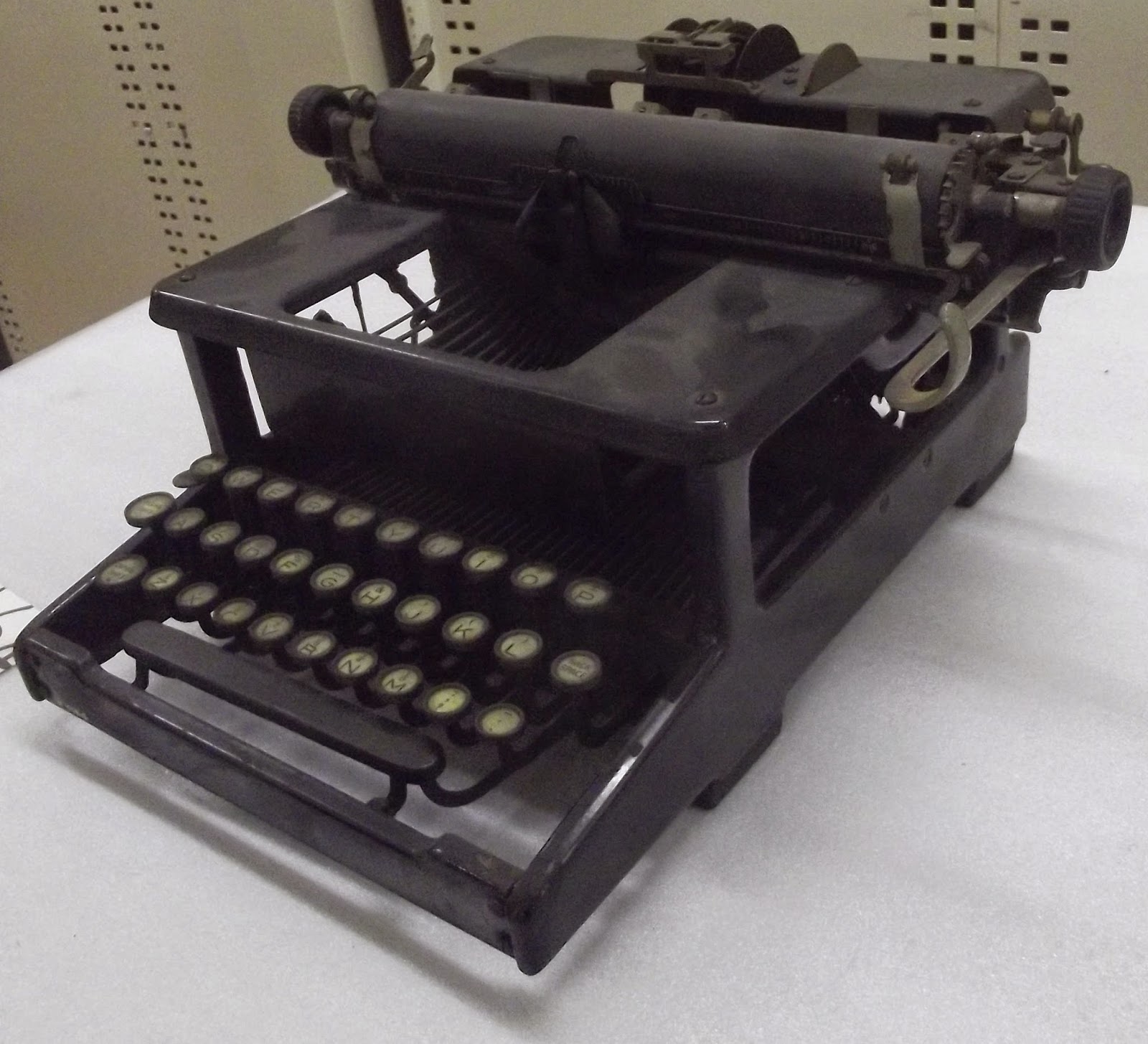 This later model Remington Junior, serial number JP60237 (made January 1916)  was donated to the Powerhouse Museum in Sydney by Chartres in 1939.
It's a long story. A Remington Junior typewriter, sold under somewhat mysterious circumstances in Adelaide, South Australia, in late November 1914, found its way to Moúdros on the Greek island of Lemnos in the north Aegean in early 1915. Moúdros was used as an Allied base in World War I and in October 1918 was the site of the signing of the Armistice of Mudros, which ended hostilities between the Ottoman Empire and the Allies.
In November 1915 the Remington Junior was returned from Moúdros to Australia by the Melbourne doctor who had taken it there - Lieutenant-Colonel William Henry Bryant of Collingwood (whose father, publican James Mark Bryant, had helped establish the Australian football code in 1858-59). 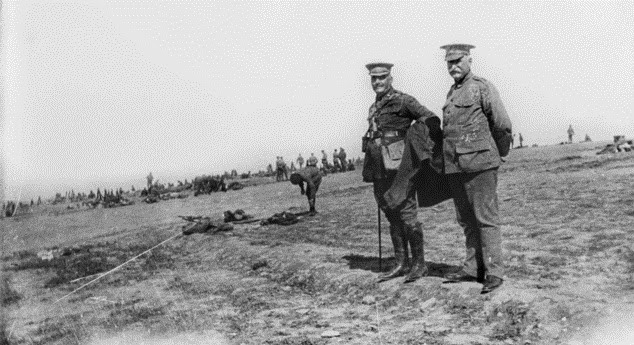 Lieutenant-Colonel Bryant, right, at a camp on the Aegean island of Lemnos in April 1915.
While war correspondents clearly favoured a true portable, the Corona 3, at Gallipoli, the Remington Junior had been donated by South Australian businessman Charles Francis Muller (1871-1954) to the 1st Australian Stationary Hospital, Australian Army Medical Corps, Australian Imperial Force, for use at Maadi in Egypt and on both Lemnos and Moúdros in the Aegean.
Dr Bryant was commander of the 1st Australian Stationary Hospital and the typewriter was sent from Adelaide to Melbourne to be in his care. His unit left Melbourne on the Kyarra on December 5, 1914.
Twice Mentioned in Despatches for his work at Moúdros, the extremely trying conditions there destroyed the 54-year-old Bryant's health, forcing his return to Melbourne. He never regained full health, was sent to Caulfield Military Hospital and later to the Anzac Hostel in Brighton, where he died on May 6, 1920, aged 60. 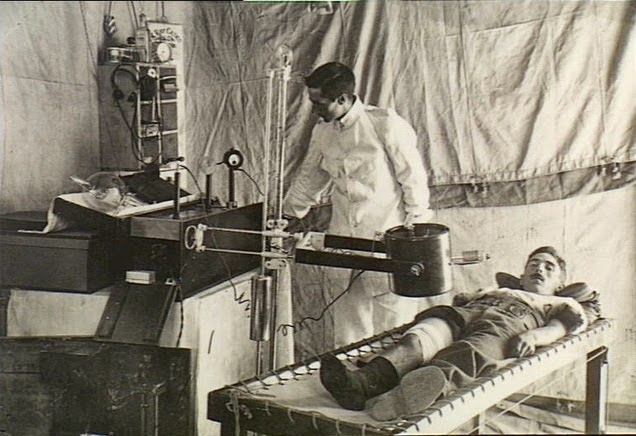 Staff Sergeant G. Leo A. Coates, an electrical engineer in civilian life, performing an X-ray on a soldier in the 1st Australian Stationary Hospital at Moúdros. The X-ray was to determine the position of a bullet in the patient's one remaining leg.
Meanwhile, the Remington Junior had been donated to the Citizens' War Chest and loaned to the Australian Red Cross Society in New South Wales in April 1919. The loan stipulated the Red Cross give it to the Soldiers' Club when it disbanded, which it never did (disband, that is). The Soldiers' Club is better known as the Returned and Services League of Australia, which Dr Bryant had helped establish in 1916. 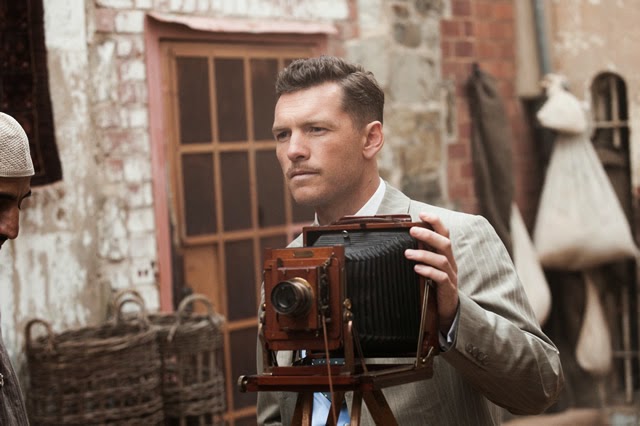 Sam Worthington as Philip Schuler in Deadline Gallipoli.
The incredible story of this Remington Junior began to unravel in late May, when I was asked by the producers of the four-hour mini-series Deadline Gallipoli (due for release next Anzac Day, April 25, 2015) about the chances of them acquiring an Empire Lightweight typewriter and another three-bank, the Remington Junior, to use in filming. I told them the only Empire Lightweight I knew to be in captivity was in the Powerhouse Museum in Sydney, where there is also a Remington Junior. But I added that I thought a Remington Junior, an even heavier semi-portable than the Empire Lightweight, was very unlikely to have been used by war correspondents at Gallipoli.
The screening of Deadline Gallipoli is scheduled to mark the centenary of the disastrous, ill-conceived ANZAC landings in the Dardanelles, Turkey, during which the lives of 8709 young Australians and 2721 New Zealanders were lost. Total Allied casualties were a monstrous 187,959, of which 56,707 were killed - for no military gains whatsoever. Winston Churchill had a lot to answer for. 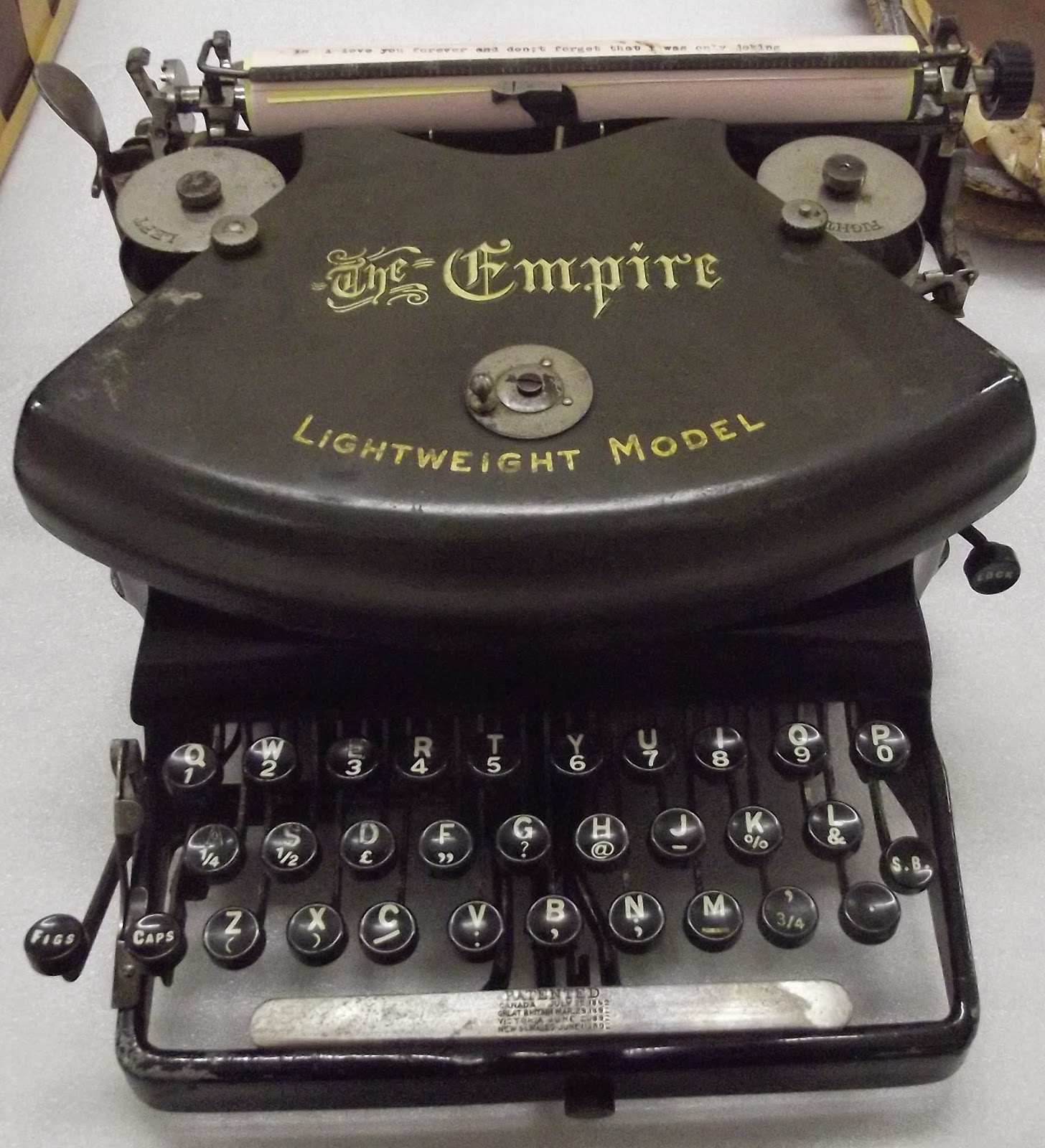 The Powerhouse's Empire Lightweight
The Deadline Gallipoli producers obviously didn't like my honest, straightforward answers about these typewriters, and didn't bother to reply. I've since heard nothing more about this production, so cannot say what typewriters have been used in the filming. Shooting started in Adelaide in mid-June and was expected to last nine weeks, which means it will have been wrapped up around about now. 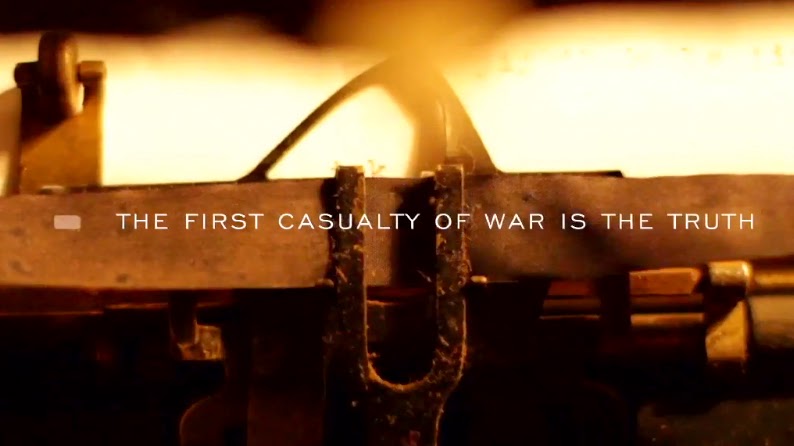 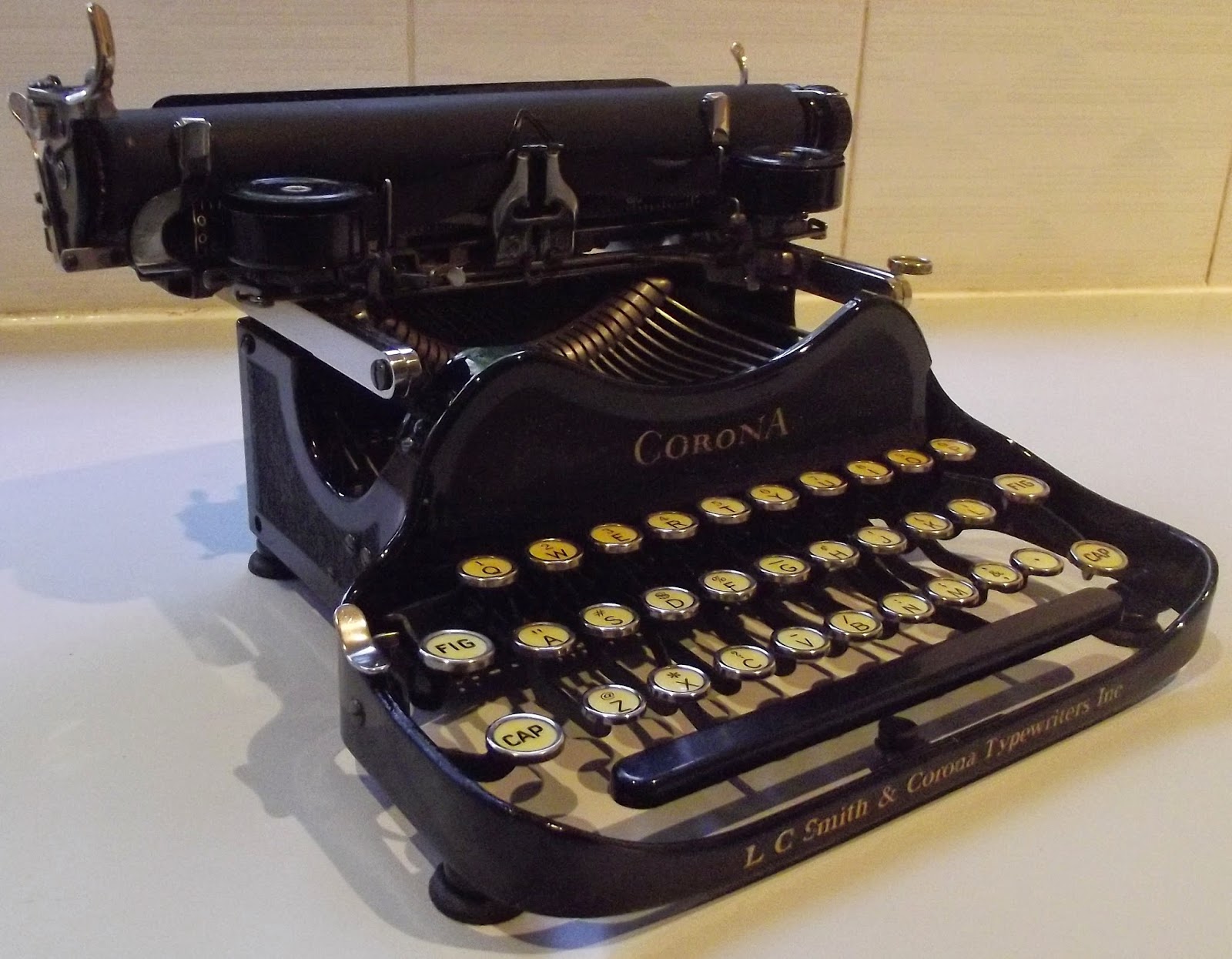 As I told the producers, the Corona 3 was overwhelmingly the typewriter of choice for Australian war correspondents at Gallipoli. Quite apart from it being by far the best typewriter for the task at hand, the journalists didn't have a lot of choice in 1914-18. It was the portable typewriter most readily available in Australia (through Stott & Underwood) at that time.
Ashmead Bartlett is known to have used an Empire Lightweight (bought in England) at some point during the campaign. But Bean and Murdoch definitely used Corona 3s. It is not yet known what Schuler used, but it is most likely to have been a Corona 3 as well. 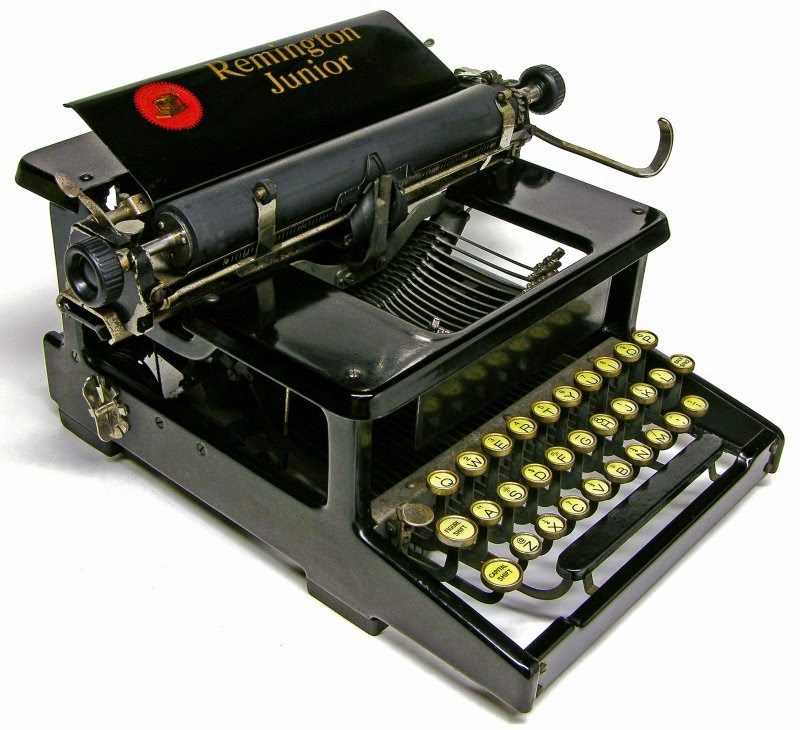 This Remington Junior is in Alan Seaver's Collection
It may have been a reference to Dr Bryant's Remington Junior in the Australian National Library's Trove digital collections to that led the South Australian makers of Deadline Gallipoli to believe such a machine might have been used by a war correspondent at Gallipoli. Any journalist would have struggled to even get it ashore, let alone use it there. 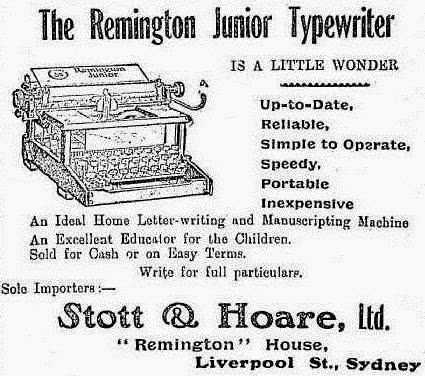 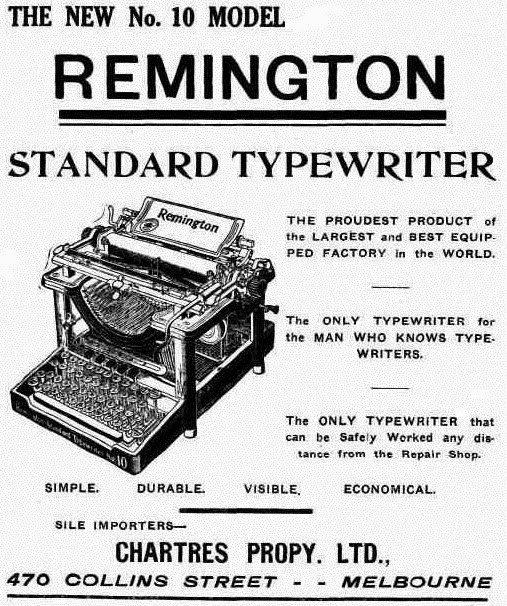 Late 1910
The only logical explanation for this is convoluted. When Chartres took over the Remington agency, it retained the Stott & Hoare business school at Remington House in Sydney, and using Stott's long-established goodwill, operated it under its original name. It did not, however, take control of Stott colleges elsewhere in Australia. Stott continued its typewriter business in all other parts of the country, notably selling the Corona 3. Stott & Hoare's New South Wales advertising during the war years concentrated on the Remington Junior, while Chartres did not advertise under its own name in that state until 1920. And the only machine approximating to a portable which was available to Chartres to sell during World War I was the Remington Junior. 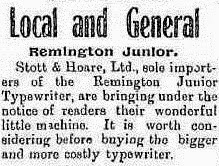 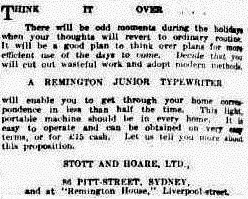 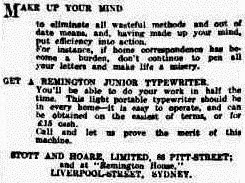 And "Be good to yourself during 1917 ..."
But was the Remington Junior a true blue Remington? As Alan Seaver says on his Machines of Loving Grace website, "The Junior stands out among Remingtons for how truly unusual it is compared with other Remingtons ... In fact, the Junior shares many traits with the full-keyboard Smith-Premier No 10, and especially the Smith Premier Simplex, a stripped-down No 10 that also debuted in 1914. Most notable of these is the placement of the ribbon spools behind the carriage in a vertical side-by-side configuration. The spring drum is also oddly positioned, sitting perpendicular to the carriage with the cable passing down from the carriage along a pulley. The piece that looks like a winding key on a daisy is the spring-tensioner. Note the extremely basic keyboard. A single set of shift keys, a rudimentary shift lock tab, and back space are the only keyboard controls. The margin release is a lever up on the carriage. A line-spacing toggle behind the return lever is just about the only other amenity to be found." 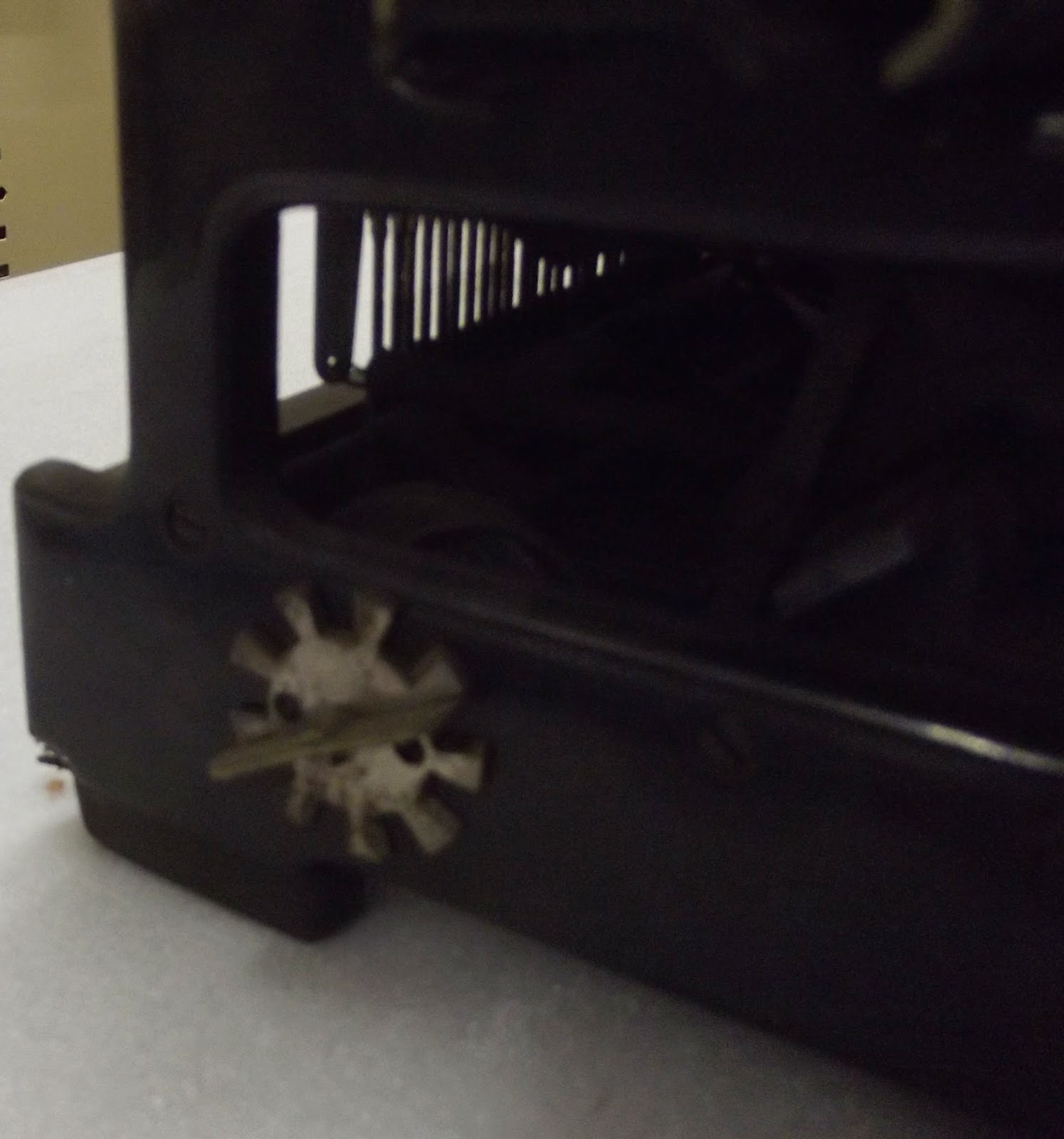 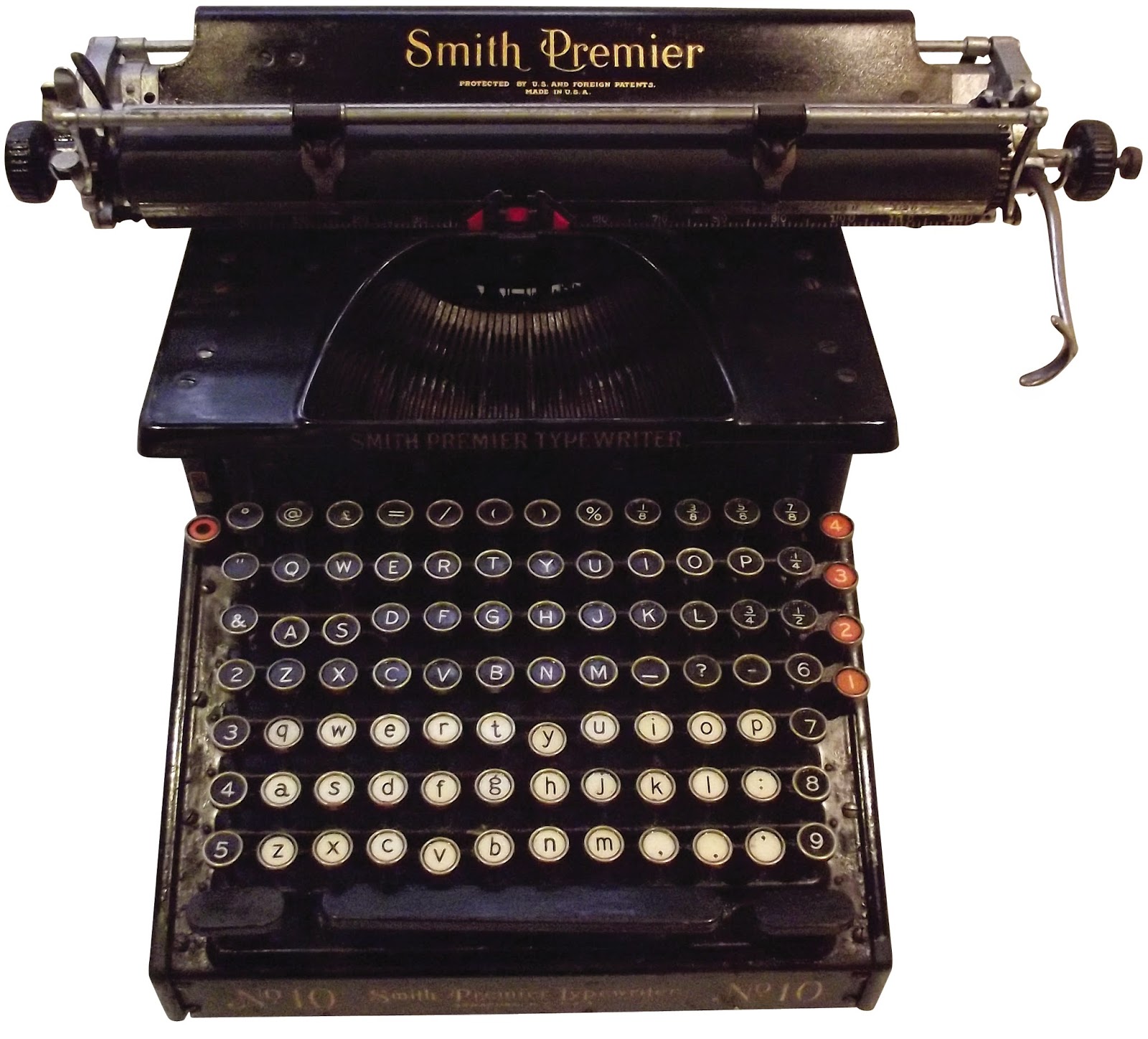 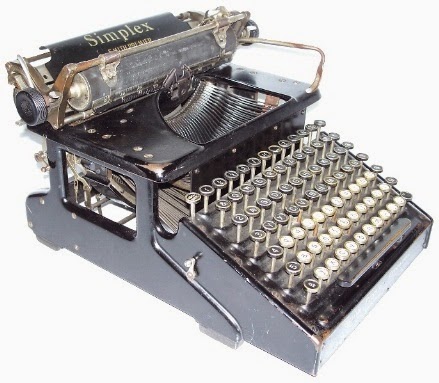 Arnold Betzwieser's Smith Premier Simplex
Alan added, "You may be surprised to find that this is a segment-shifted machine. Though segment-shift had been around for some time (since the L.C. Smith No 2), this is the first application of the technology in a double-shifted keyboard that I am aware of. The type basket shifts down for capitals, and up for figures."
Richard Polt, on his Remington portables page at The Classic Typewriter Page, points out the Remington Junior is "Not a true portable but a 'luggable' typewriter ... 'It is smaller, it is lighter, it is designed for the simpler uses' says a 1915 ad. It is similar to the Century 10 typewriter, marketed around 1919-1921 by the American Writing Machine Company, which was controlled by Remington." 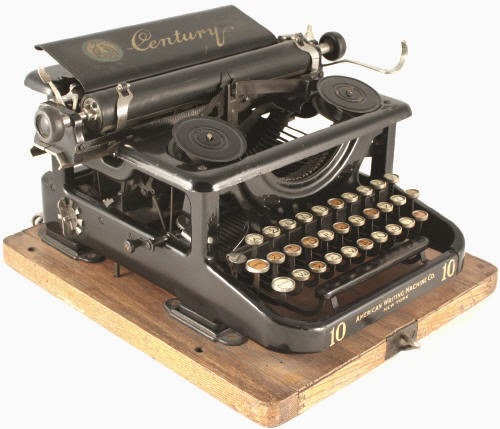 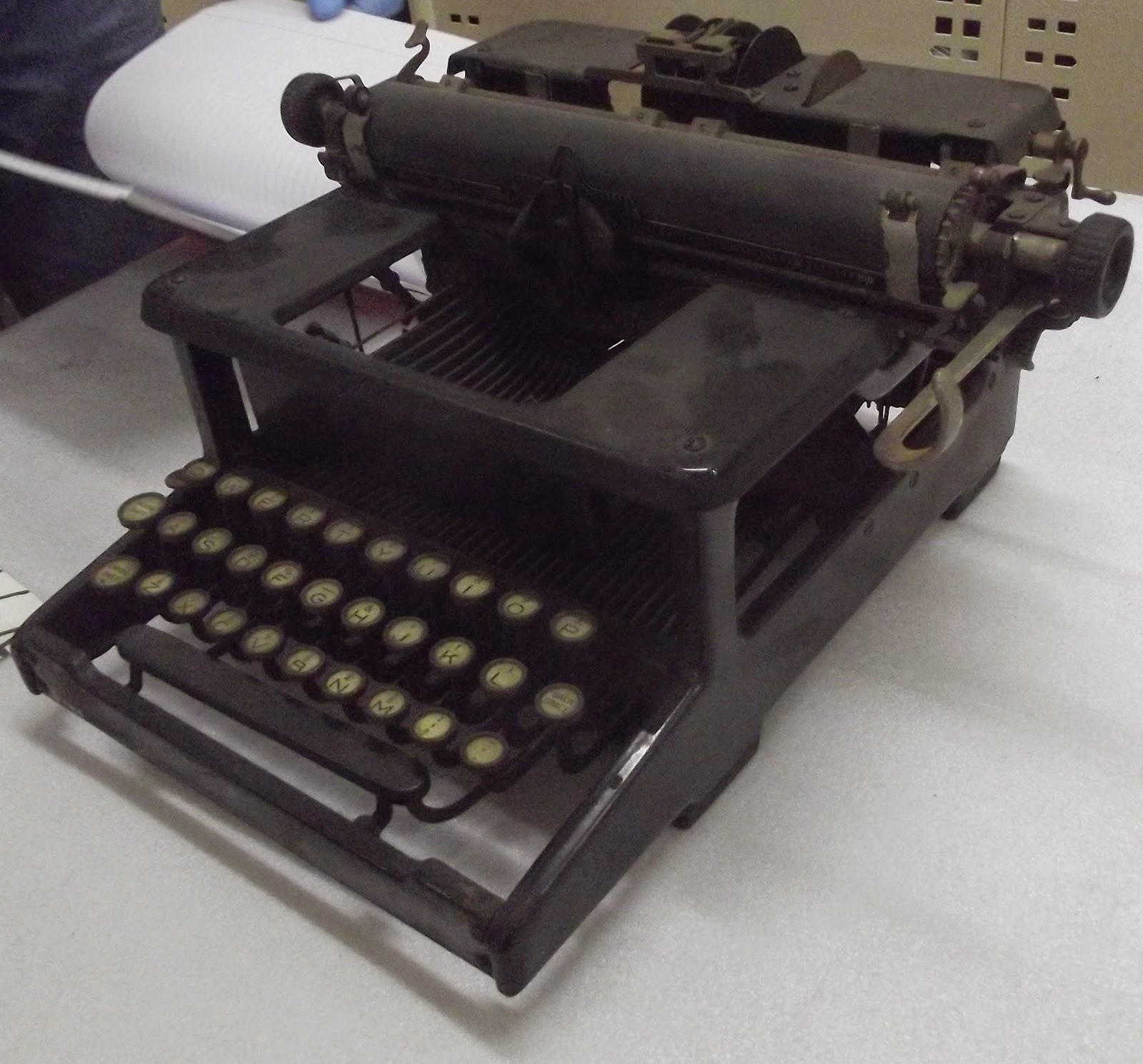 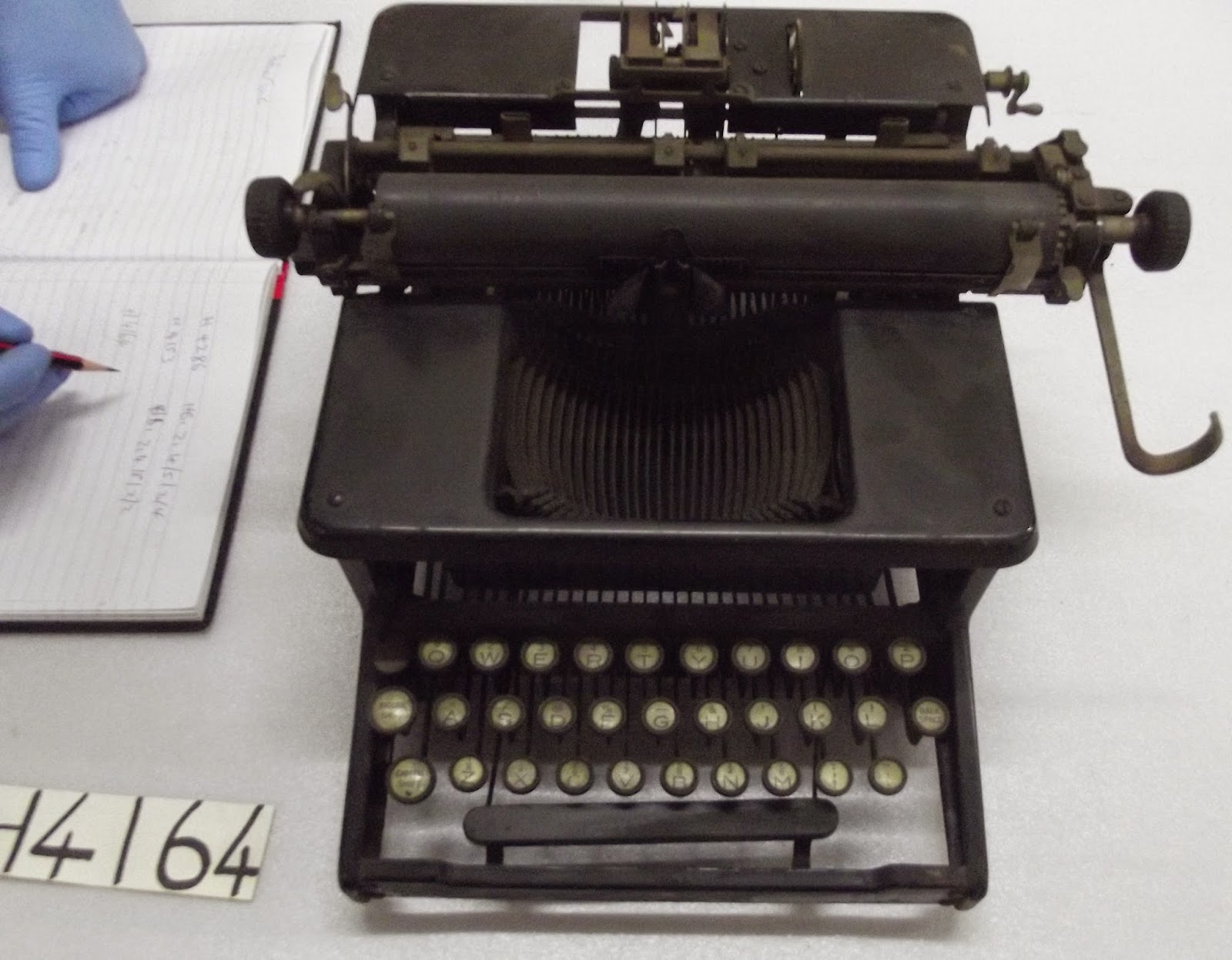 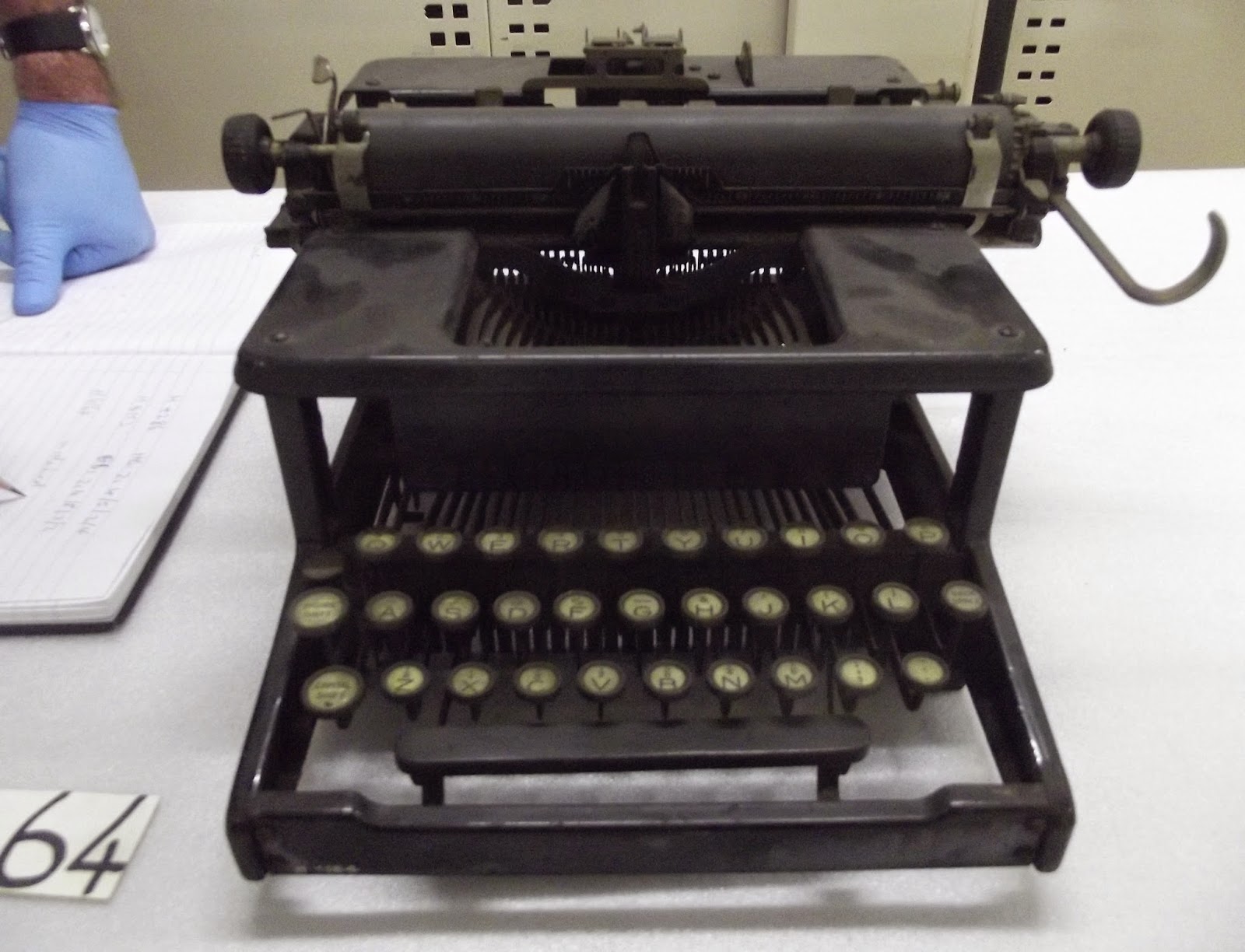 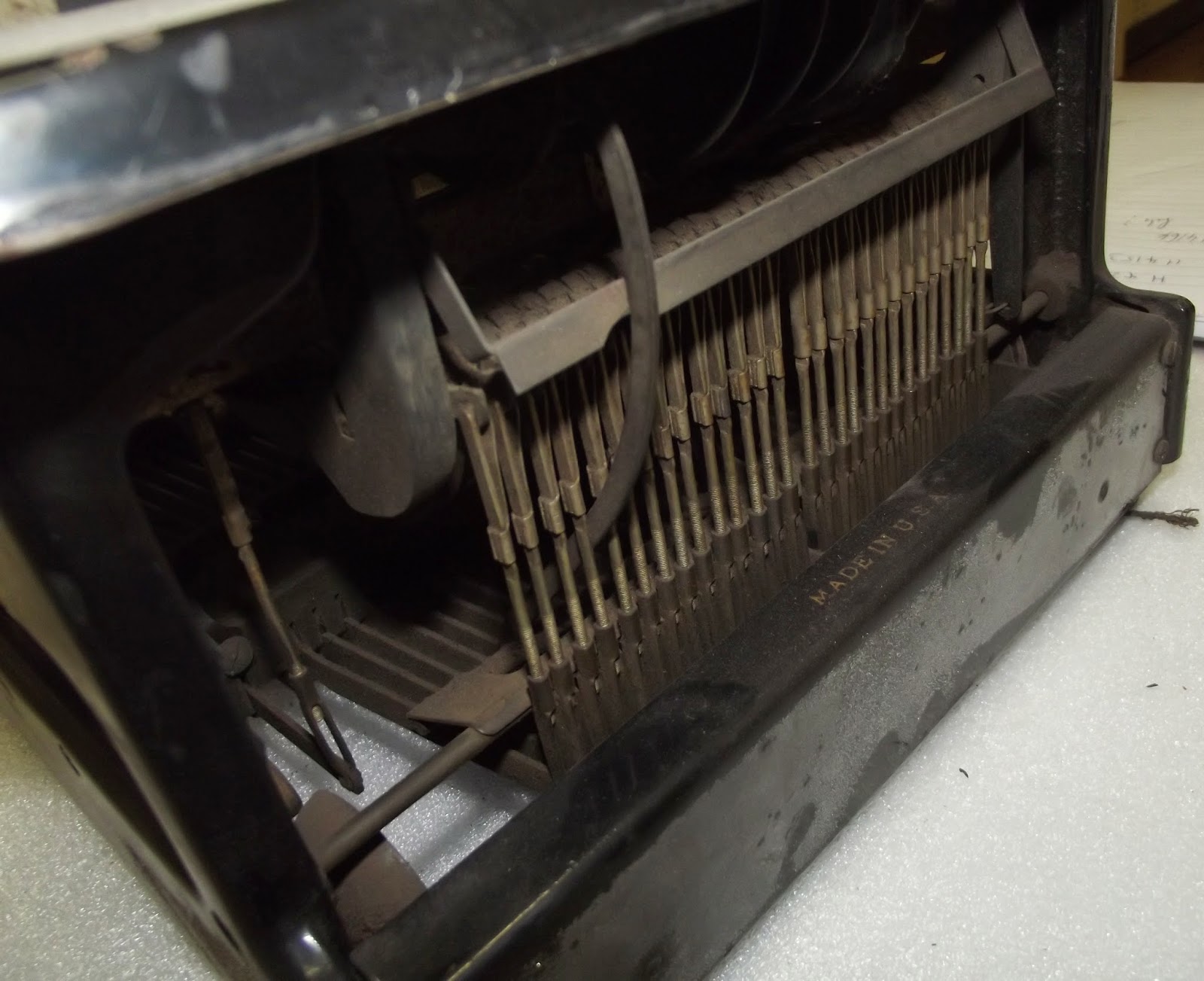 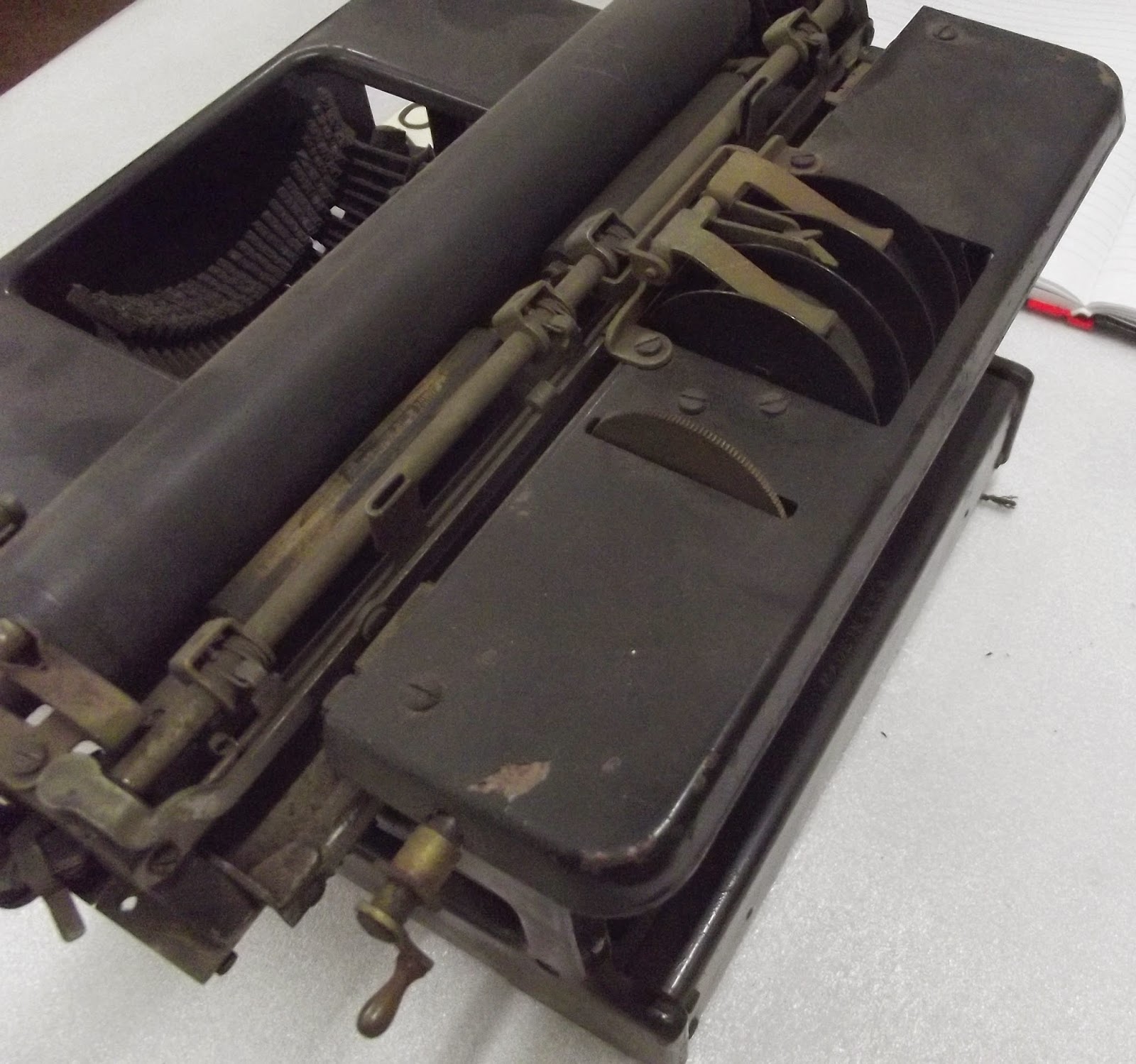 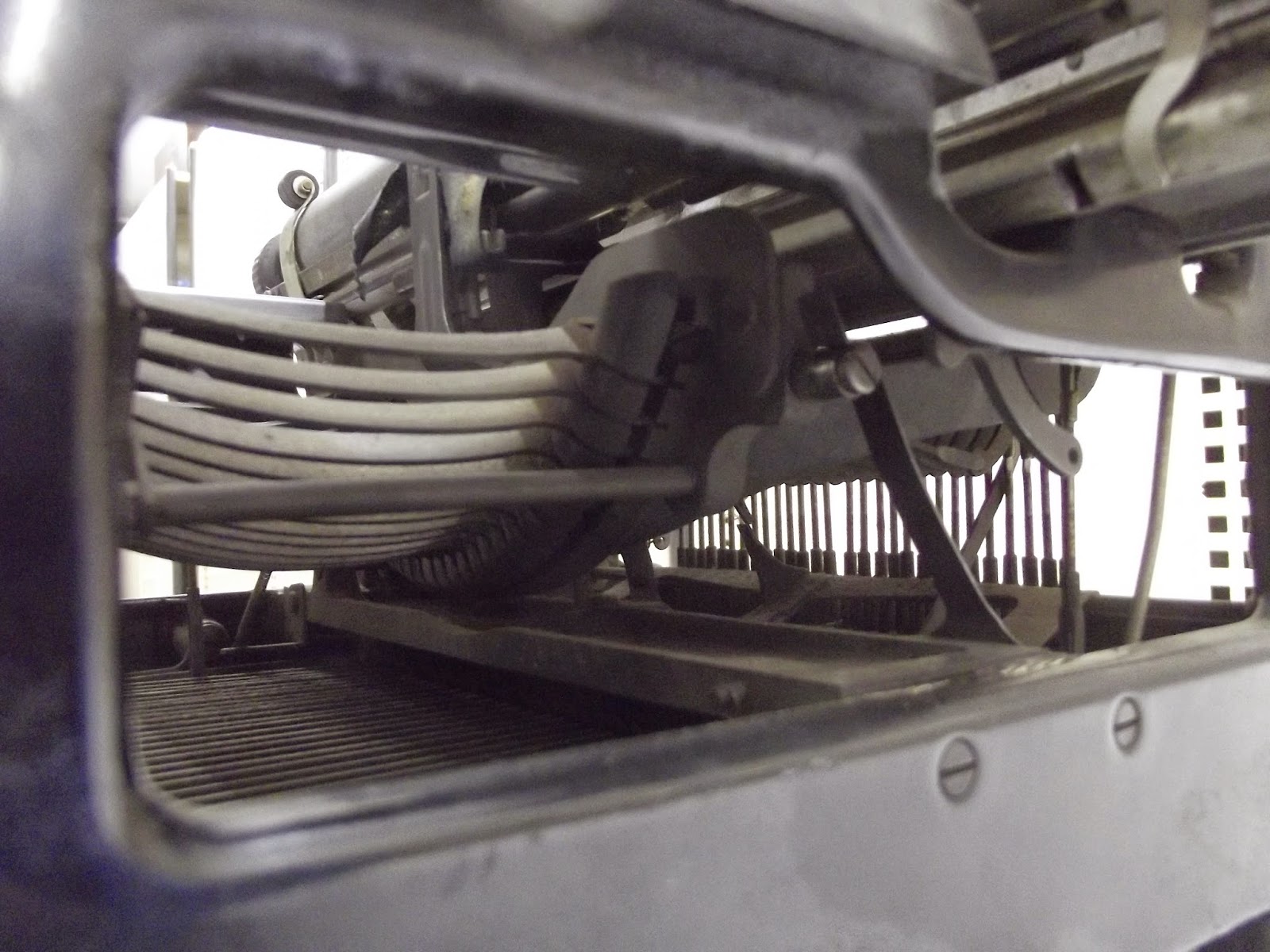 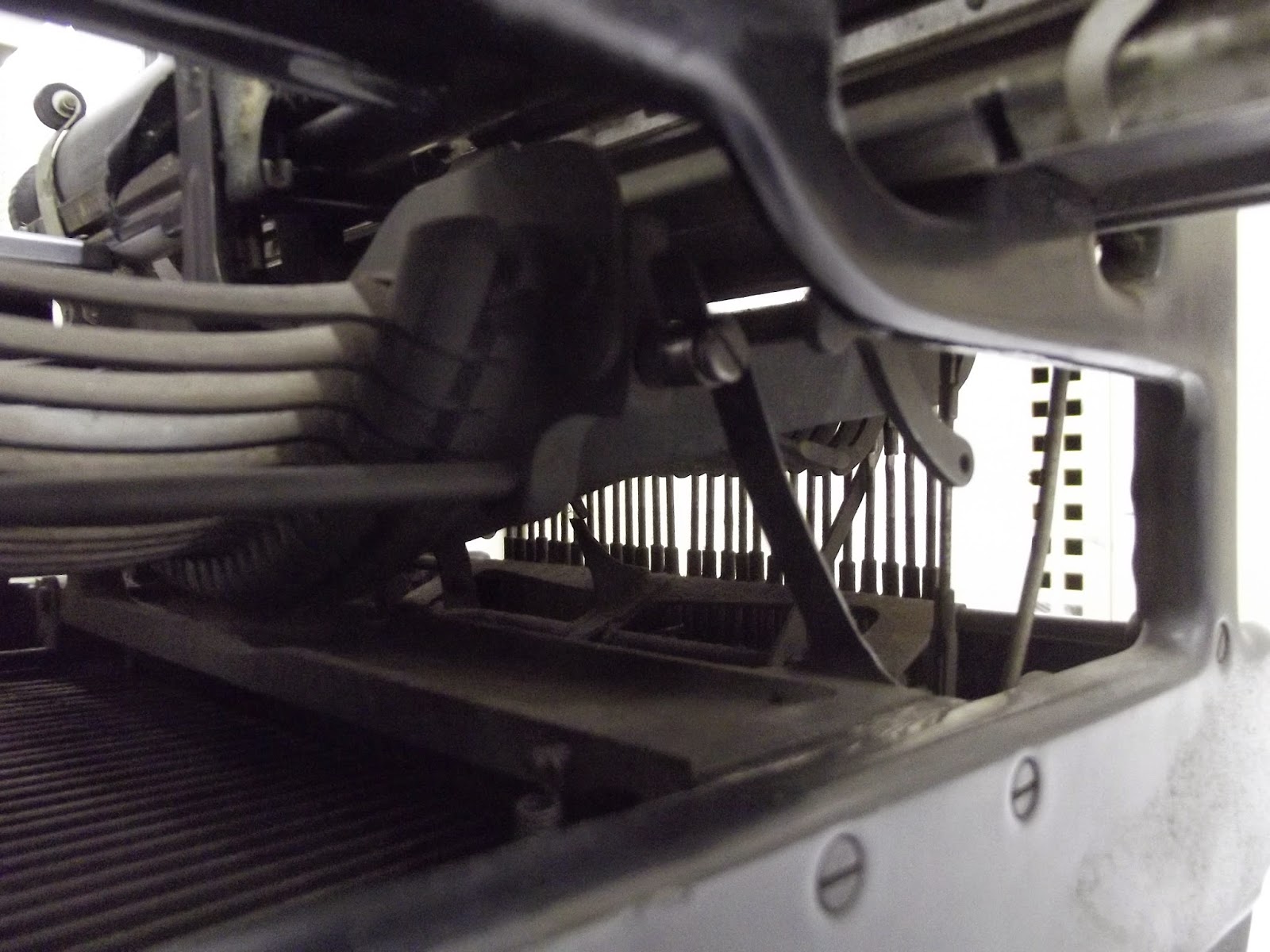 Posted by Robert Messenger at 20:54