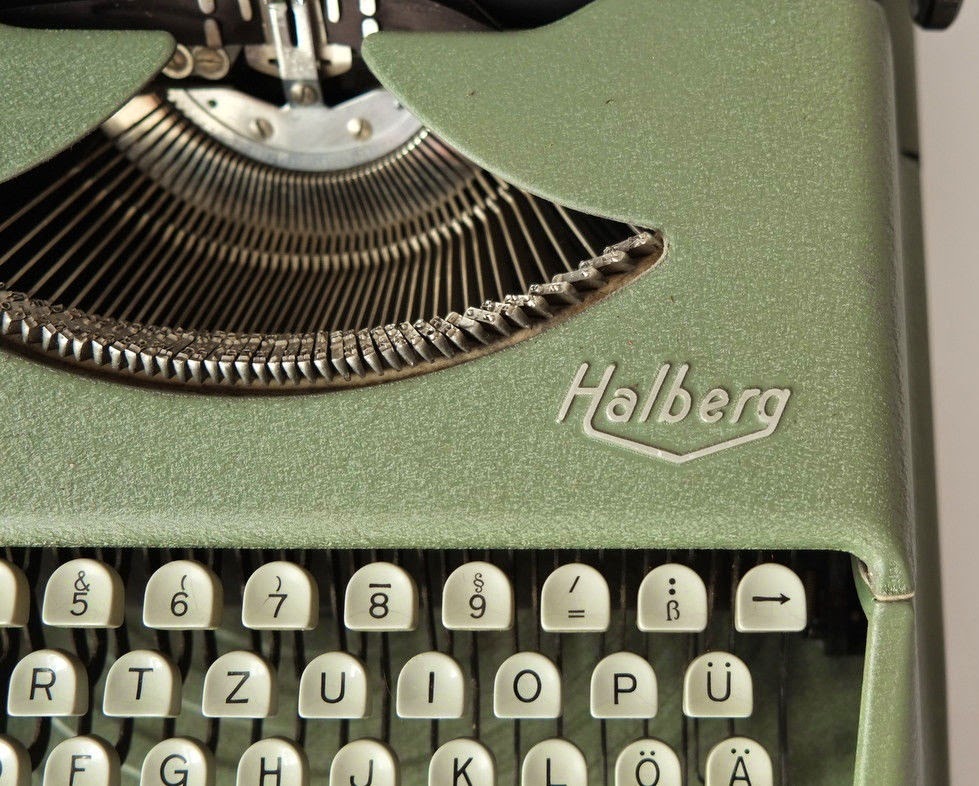 David Lawrence, the only typewriter repairman in Auckland, New Zealand (he's at Environ Printers on Mount Eden, if you ever happen to visit God's Own Country), this morning alerted me to this Halberg portable typewriter (serial number 1705X) for sale on eBay in Germany ("buy it now" $US399; #311036541350).
This Halberg looks to be the same model as the Halberg Junior that Spider Webz blogged on at the end of last December. See her post here. Spider gave us a peep under the ribbon spools cover and also included this ad, which she linked to Georg Sommeregger's typewriters.ch site: 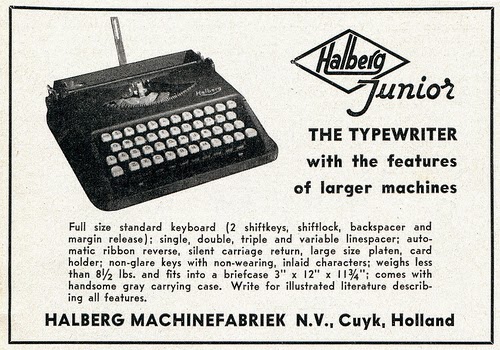 A month ago David had a very pleasant experience on acquiring an Antares Parva, and made some interesting remarks about it. "It has the most amazing action, shorter keystrokes than the Hermes Baby, fine, crisp and snappy printing, and a cadence that just rings my bell. It has never been touched by a screwdriver, and yet every single key works perfectly, the ribbon control is perfect, the alignment is perfect, the bell rings and all I had to do was fit a new ribbon and roll in paper. It has shot to the top of my go-to, grab-and-use machines. There were no bids on this, until mine, and I got it for a song, but would [now] be happy paying more for such a brilliant typer. Olivetti Lettera 22-32 machines garner lots of interest and often high bidding, but I just cannot get comfortable with the action, it's just too soft and genteel and delicate and the keys are too crowded with the 32. But this machine ... I just want to type and type and type."
I mention this because, photographed from above, the Halberg immediately reminds one of the Antares Parva. For one thing, the keytops and top plate are almost identical. 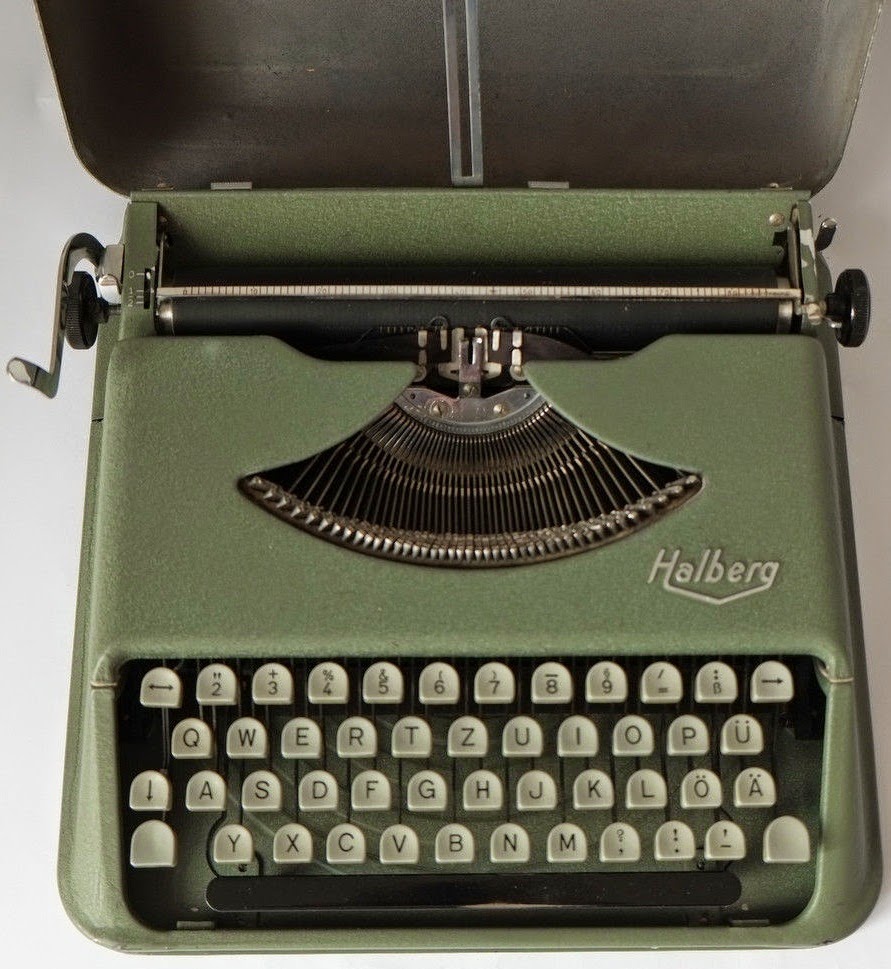 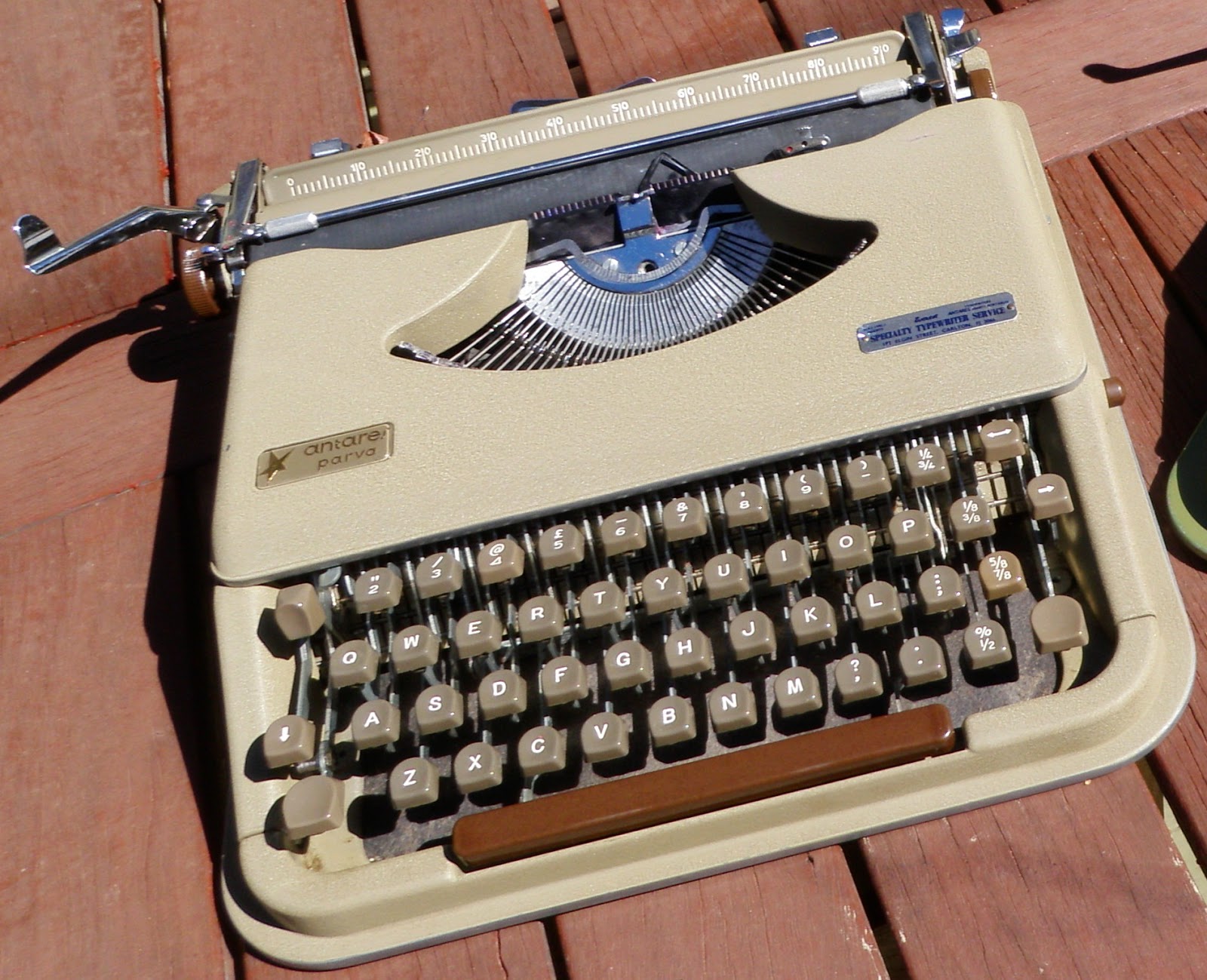 If I could still afford to buy typewriters, I might have been interested in the Halberg, even at this elevated price (Spider, seemingly, got hers for a lot less). I've always been fascinated by how closely related the Halberg is to the Royalite and the later Nippo portable typewriters (at least mechanically, if not so much outwardly). The case for the Halberg looks like it belongs to a Corona Zephyr or Skyriter, but from the side the Halberg does resemble the size and basic shape of a Royalite. There are obvious comparisons, too, to the Hermes Baby/Rocket. At a quick glance, the Halberg looks like a hotch-potch of them all, although the Parva obviously came later. 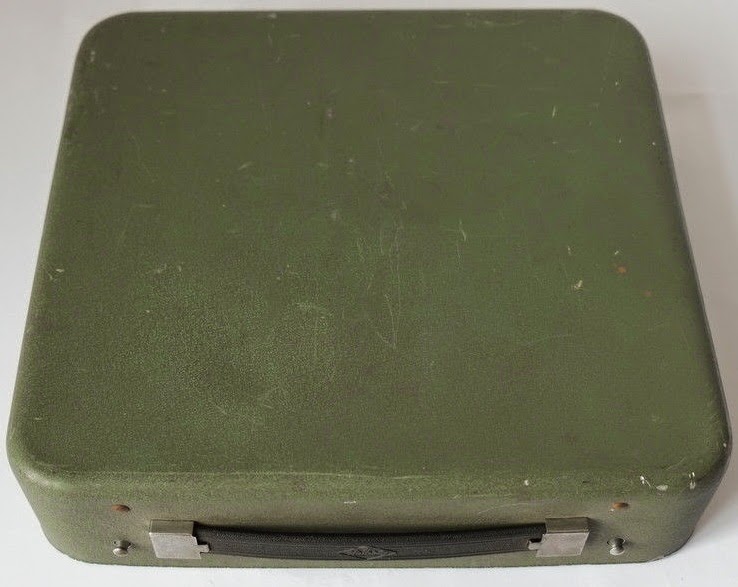 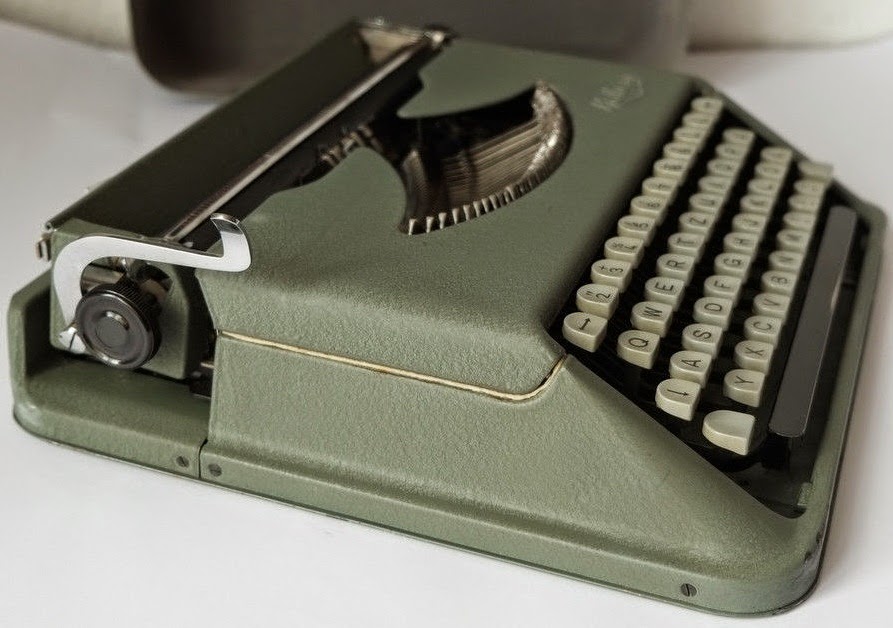 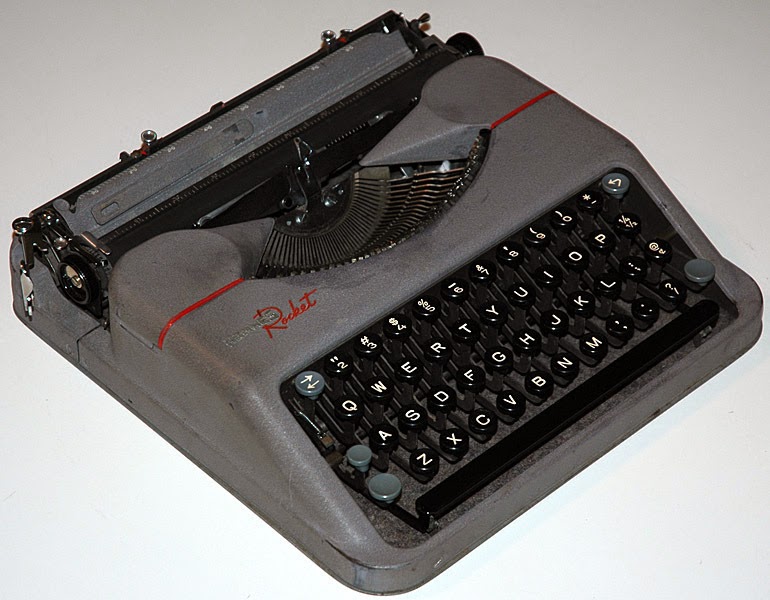 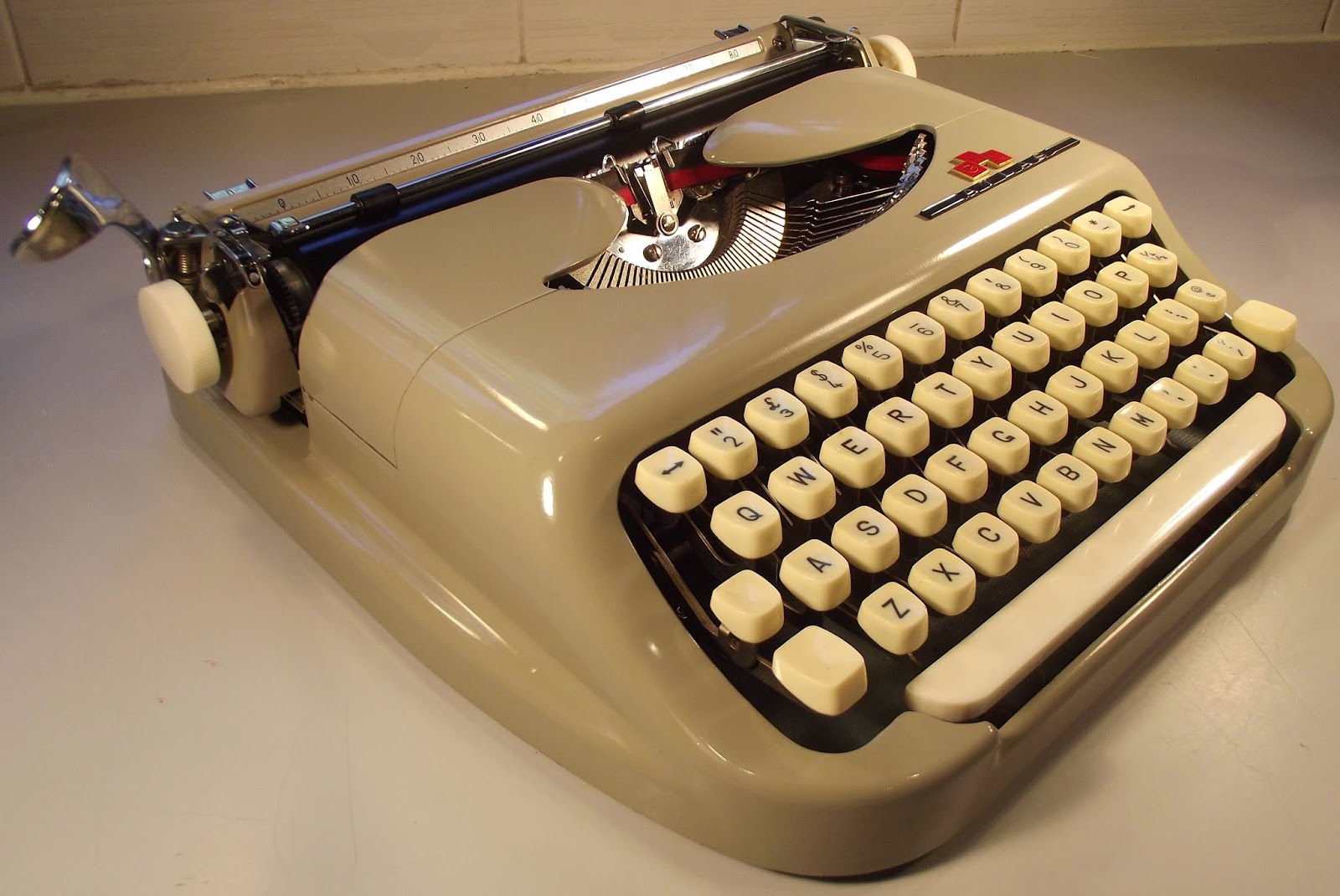 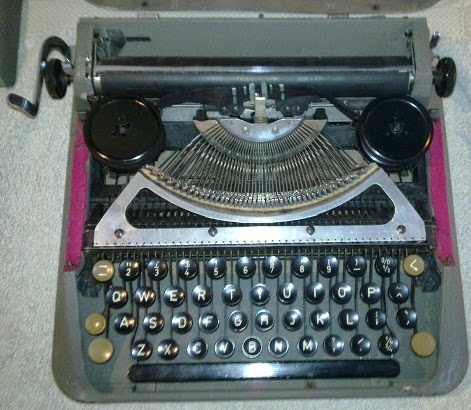 Under the cover of Spider's Halberg Junior 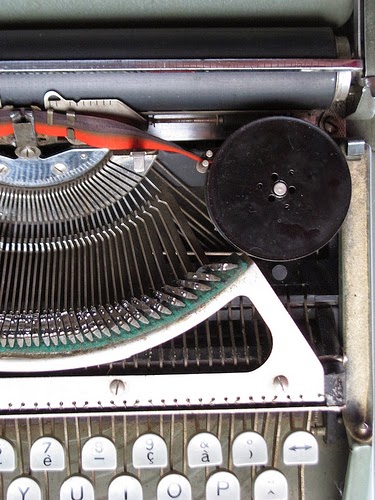 Under the cover of Georg's Halberg 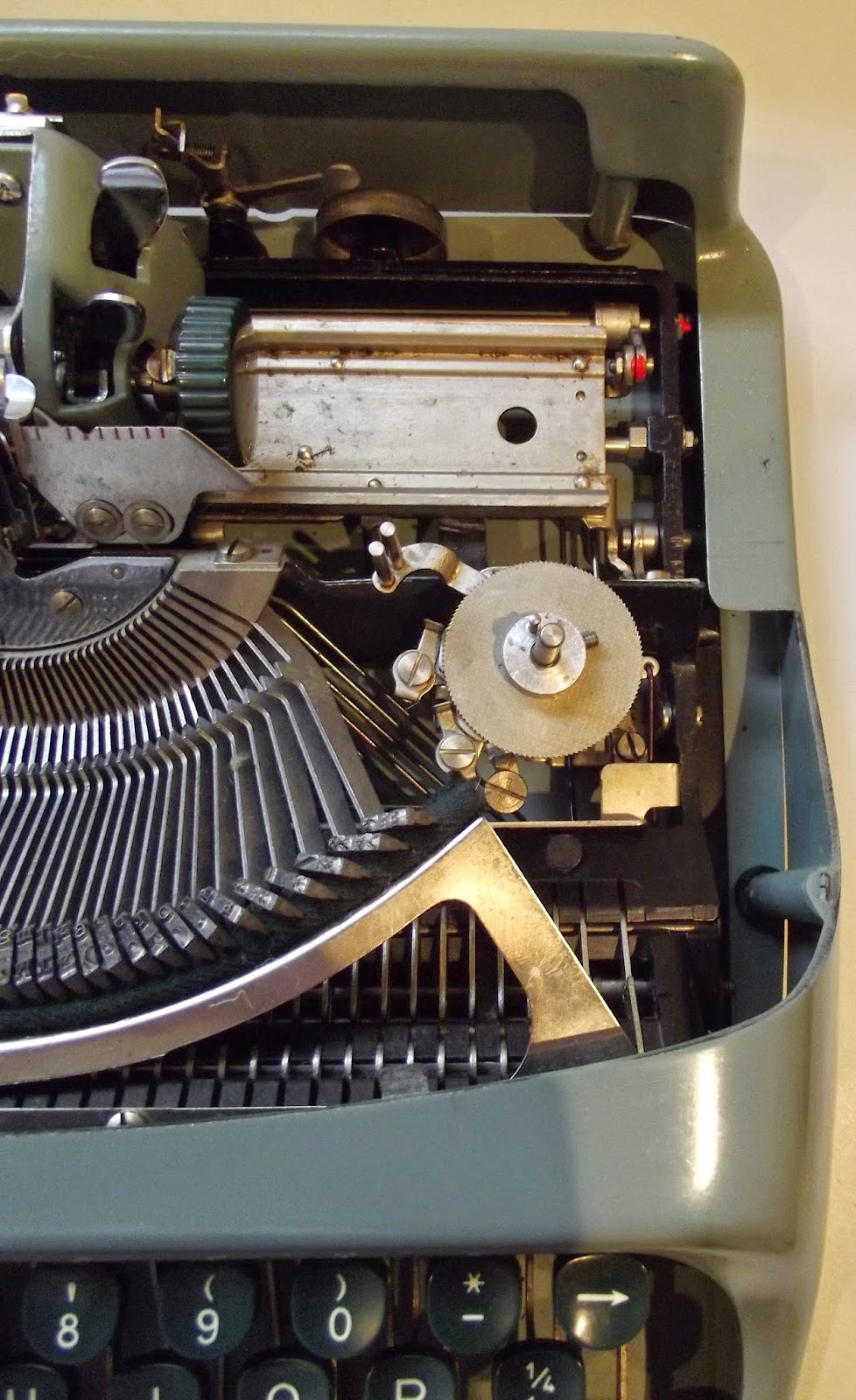 Under the cover of a Royalite 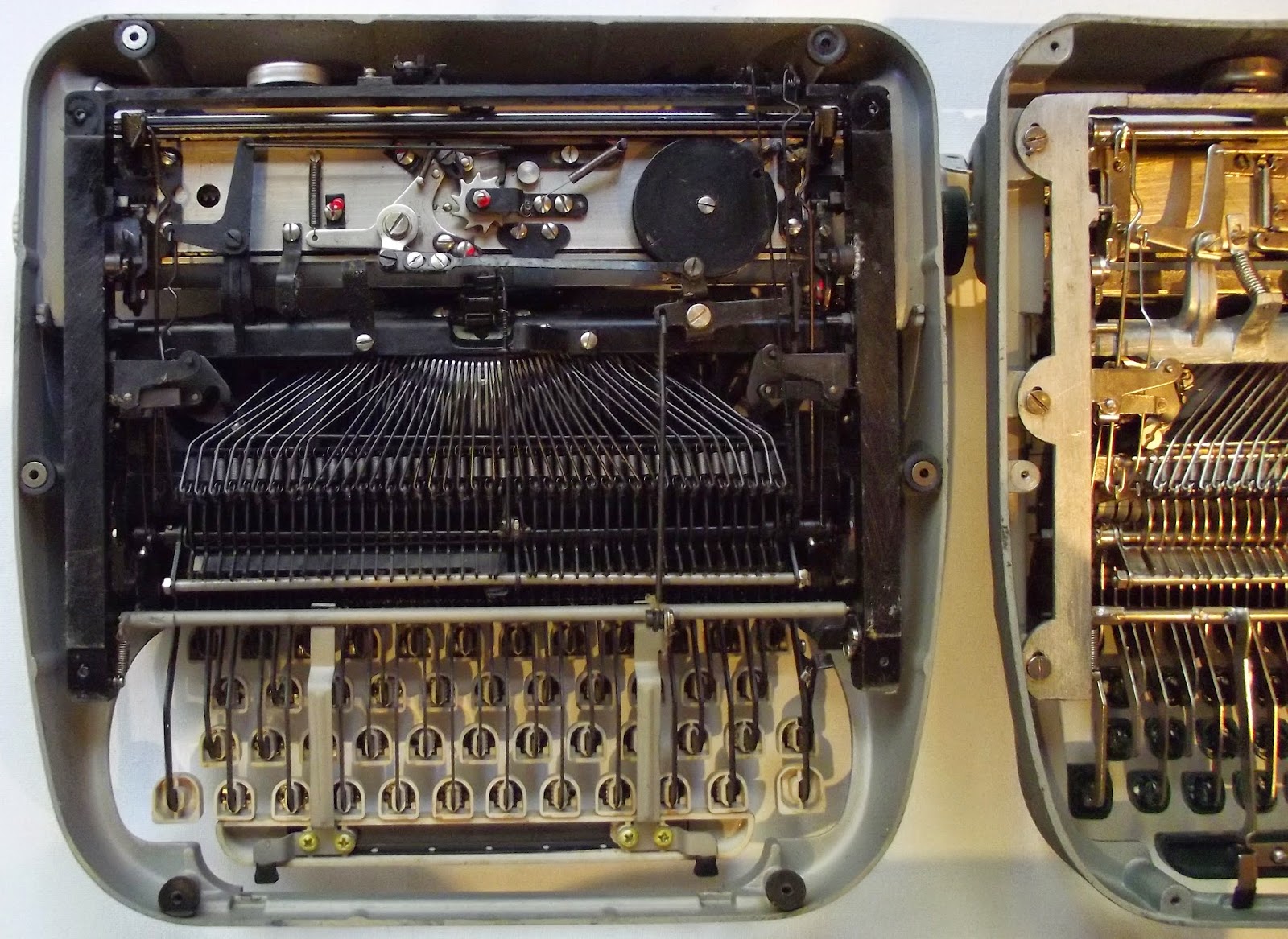 Underneath the Nippo Atlas, left, and a Royalite 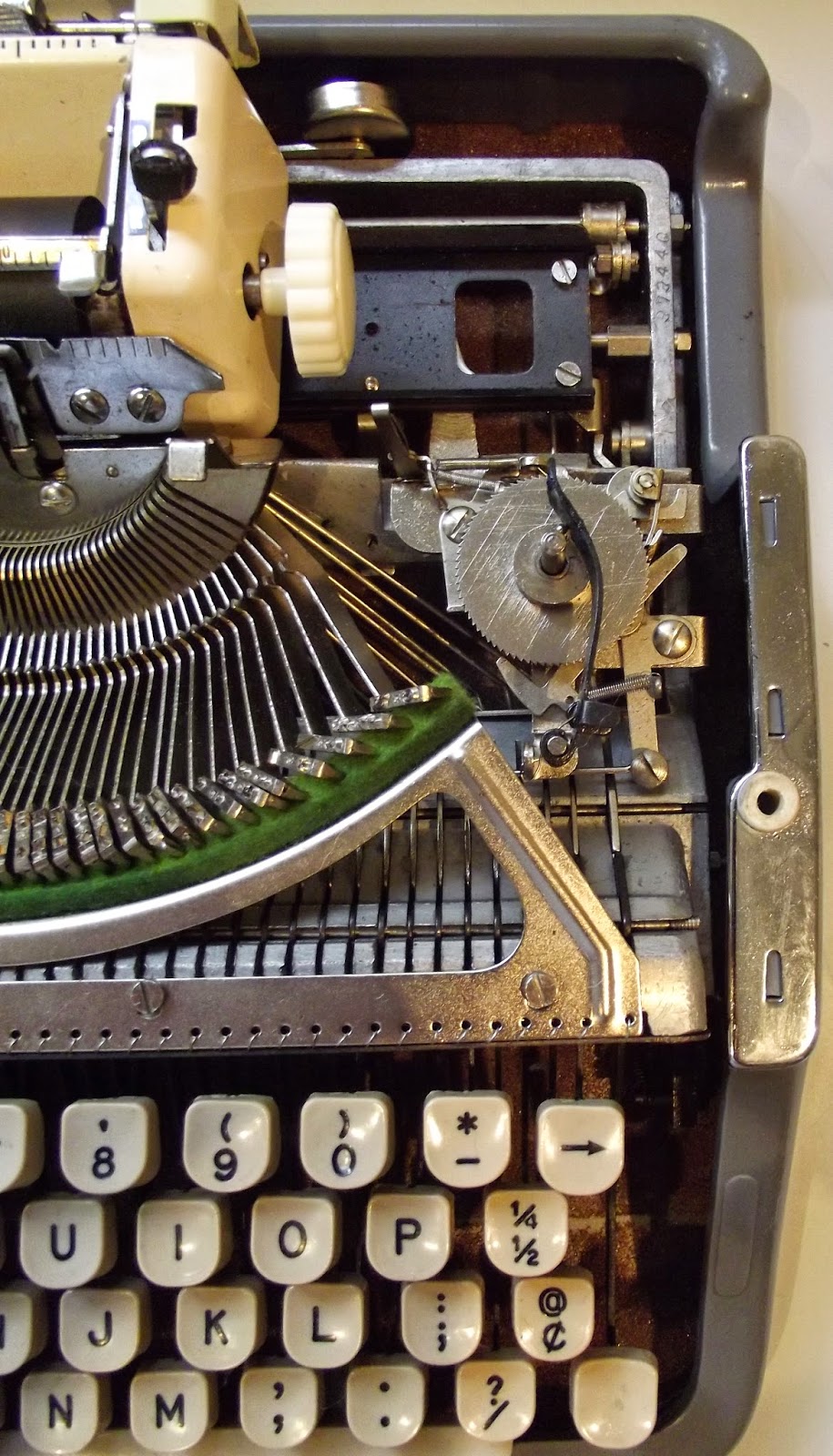 Under the cover of a Nippo 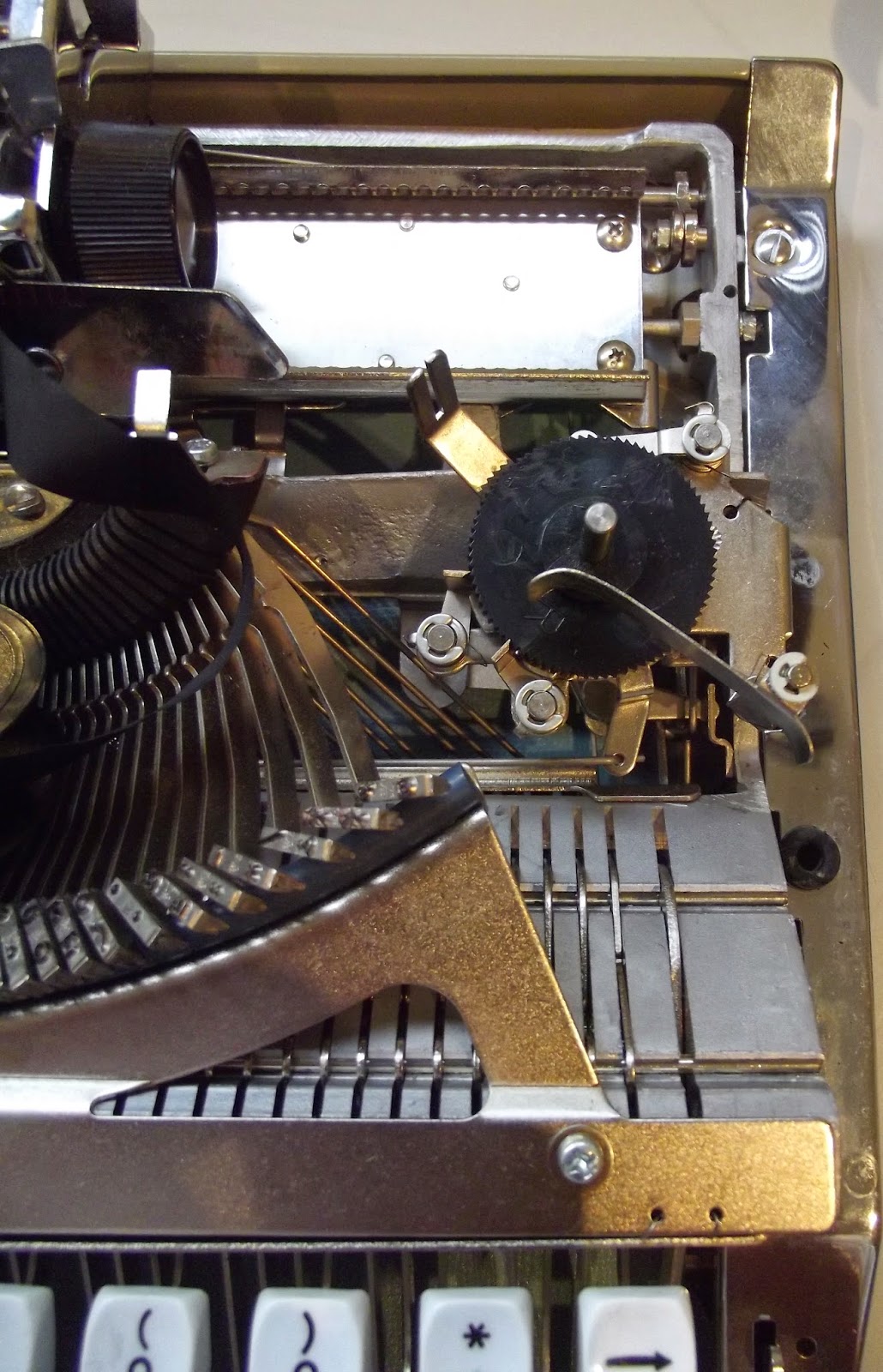 Under the cover of a Nippo P-200
The Halberg was made by Halberg Machinefabriek NV, Cuyk, Holland. Founded in Limburg in 1941, the company started making typewriters in 1952, but the factory was taken over by Royal in November, 1954. 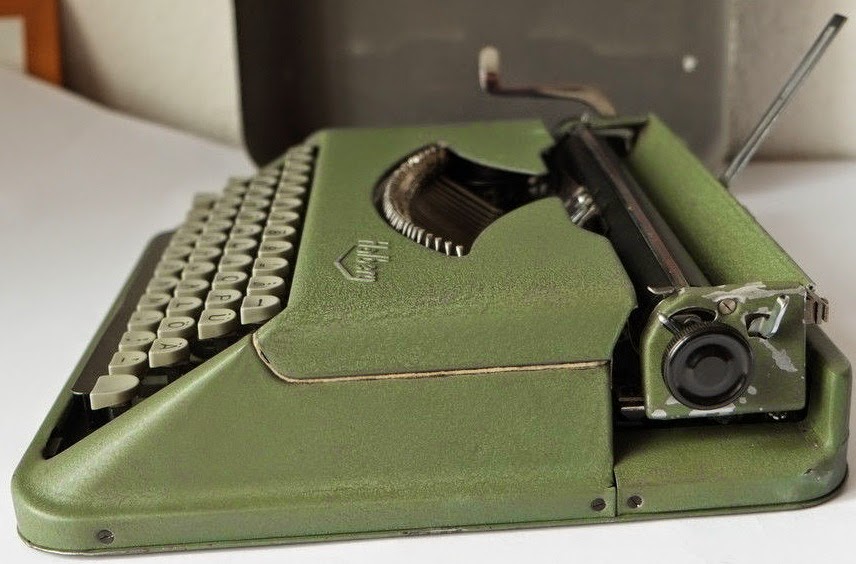 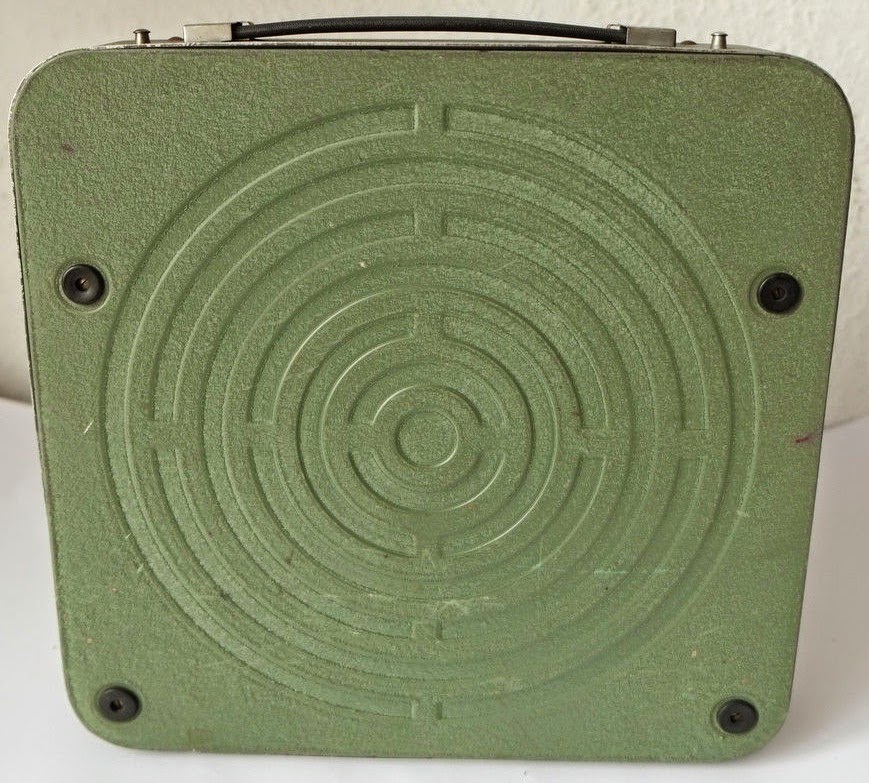 Posted by Robert Messenger at 10:03

The bottom of the typewriter is really funny! Why??

@Richard: i think it makes for more stability. I vote it my favourite "typewriter bottom".

Funny, I need to comment on the neat bottom first. Reminds me of a maze or even the heating element on older electric stoves. I think the embossing would serve to add strength or rigidity as Shordzi stated. Very artistic and functional.

I do need to get a few different ultra portables. I recently returned from a trip with a Skyriter.

Hm, I never noticed that bottom before. Seems mine is "just flat". Still hope to get the platen working properly, need to spend more time on that.

As I understood, Halberg was bought by Royal and they kept producing the same model under a new name which later indeed also included Nippon machines. But I don't have any details on that. Could ask though, if interested?

Just thought you might like to know that this sold for $75.00 on ebay today. I checked the history and it was relisted three times before it was offered at no reserve 0.99 cents. GEE

Hello, I bought mine just a few days ago in France, with a French AZERTY layout. Think that I was lucky.. 2 dollar and in excellent condition. Sr nr is 0.3266, one of the first produced in 1952.