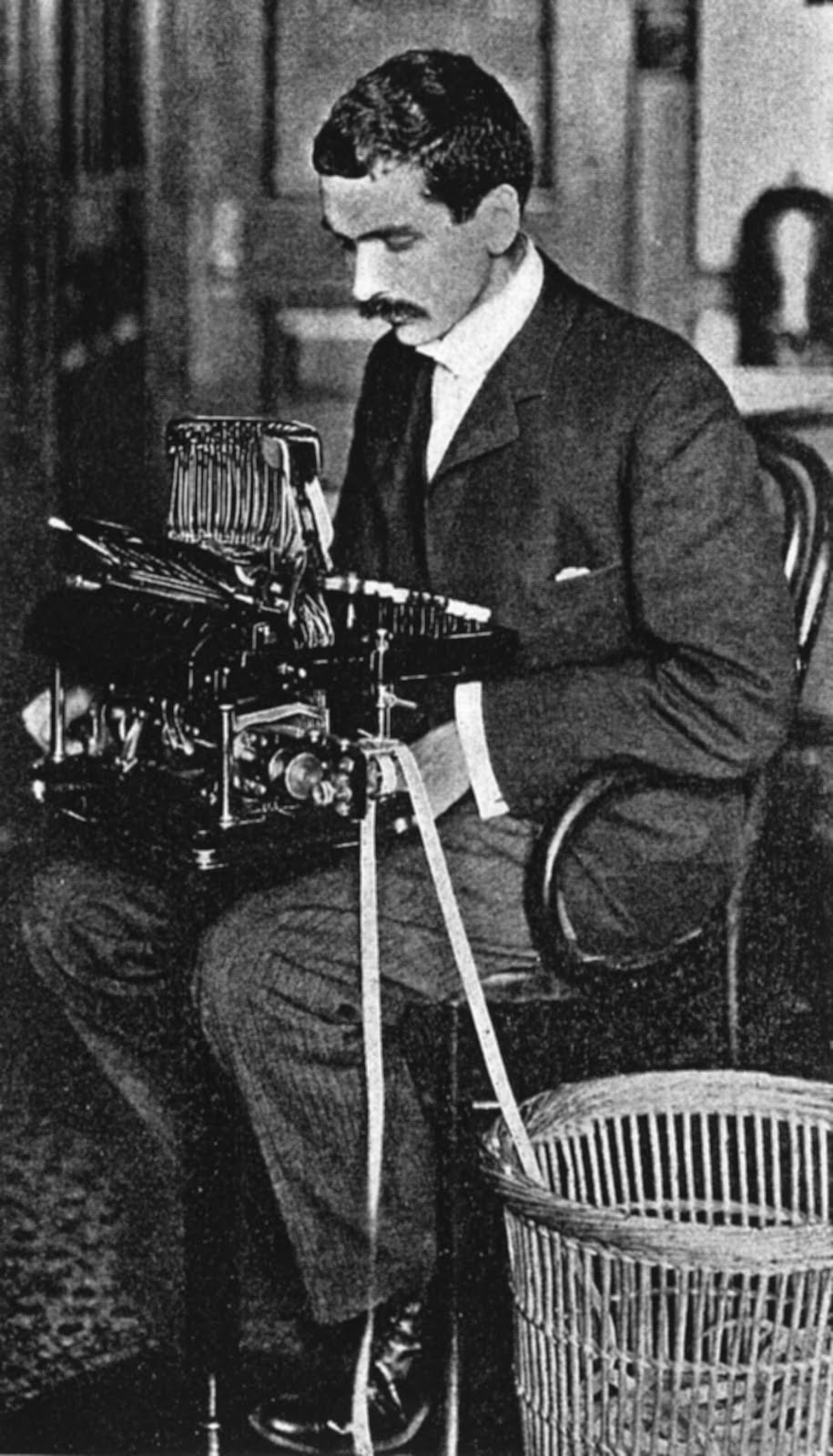 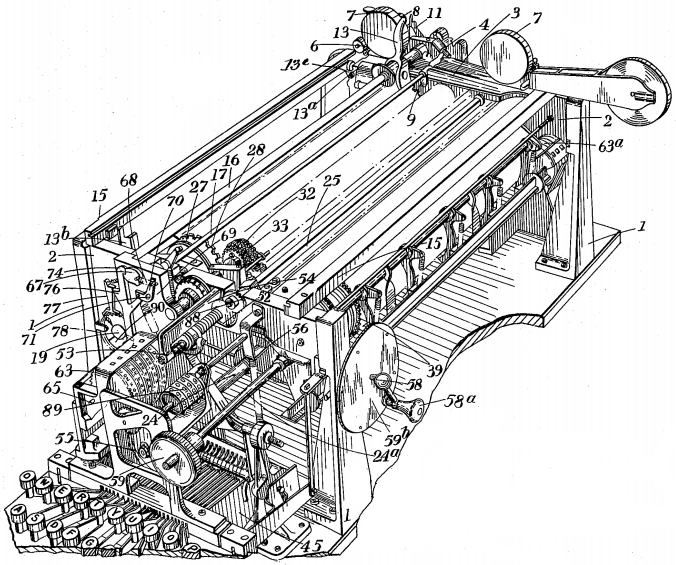 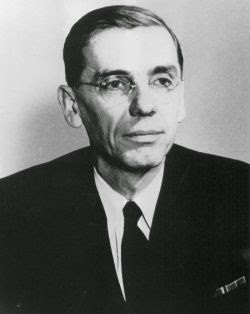 Slanderer: Wenger
*Patterson, Louisana-born Rear Admiral Joseph Numa Wenger (1901-1970), who seems to have had such a low opinion of New Zealanders and Irishmen,  played a leading role in the development of both the US Naval Security Group Command and the US National Security Agency. He was one of the seminal figures in American cryptologic history and, more than anyone else, was responsible for establishing a cryptologic organisation Navy-wide.
Tony Olmo, of Bronx Typewriters, got me started on all this when he pointed me in the direction of a video about an L.C. Smith 8-10 typewriter in a collection at Macoy Publishing in Richmond, Virginia. This typewriter types in lower case Roman characters and, in what appears to be easily decipherable "cypher" text, in upper case "Coptic English" (that is, according to the narrator Martin Faulks. I could find no other reference to "Coptic English" as a "cypher" font.). 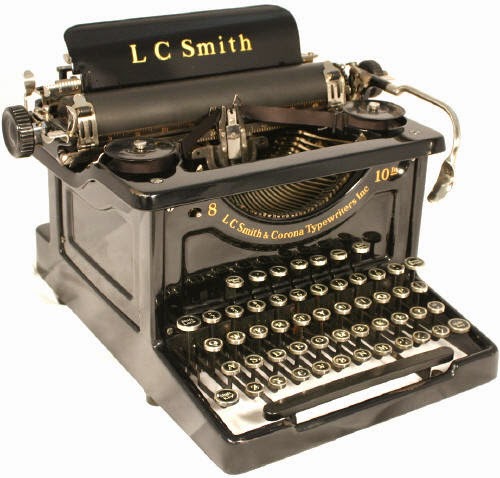 Wim Van Rompuy Collection
The Macoy Publishing & Masonic Supply Company was established by Robert Macoy (1815-1895), born in Armagh, Ulster, Northern Ireland, a prominent freemason. He is described by Faulks as an "avid code breaker", but of course Macoy was long dead before this particular model of the L.C. Smith was made. Faulks, an Englishman, is known as "the Norwich Ninja", an author, martial artist and "esotericist", whose interests include freemasonry. His video concerns a 2007 book called Committed to the Flames: The History and Rituals of a Secret Masonic Rite, by Arturo de Hoyos and S. Brent Morris.
Anyway, getting on to more serious (typewriter) matters, Tony's email led me to a search of cypher typewriters (not sure that I would call the videoed L.C. Smith one, as it strikes me as a bit too simplistic to be called a cypher machine).
Before embarking on this hunt, I had been giving a lot of thought to Donald Murray, the former Auckland and Sydney newspaper journalist who invented a telegraphic typewriter. 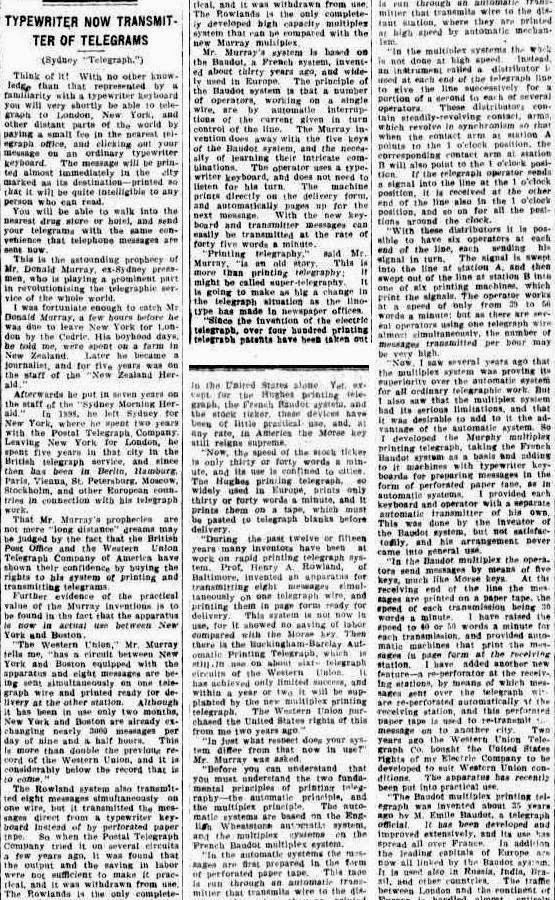 The Northern Miner (Charters Towers), May 21, 1914
The reason for my renewed interest in Murray is that is a 100 years this year since Murray's far-sighted invention was launched in the United States and Britain. 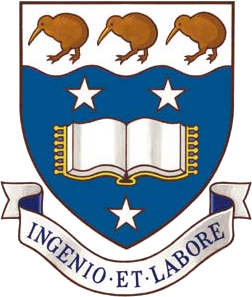 And on Friday, smack bang in the middle of my cypher typewriter quest and thoughts of Murray, a researcher from Auckland University rang to say his university was planning an exhibition to celebrate the fact Murray had attended that seat of learning. Not sure how the university had stumbled across Murray - maybe my thoughts had been transmitted across the Tasman, through some sort of magical Murray process. The researcher was unaware this was a Murray "centenary year", but was nonetheless already well versed on Murray's life and times. One thing he is keen to know is whether any of Murray's machines have survived - in Switzerland, perhaps? Murray, battling a brain tumour, had moved to Switzerland in the early 1940s and he died, aged 79, at Territet, a suburb of the town of Montreux, on July 14, 1945. His childless widow Patricia remained in nearby Veytaux. 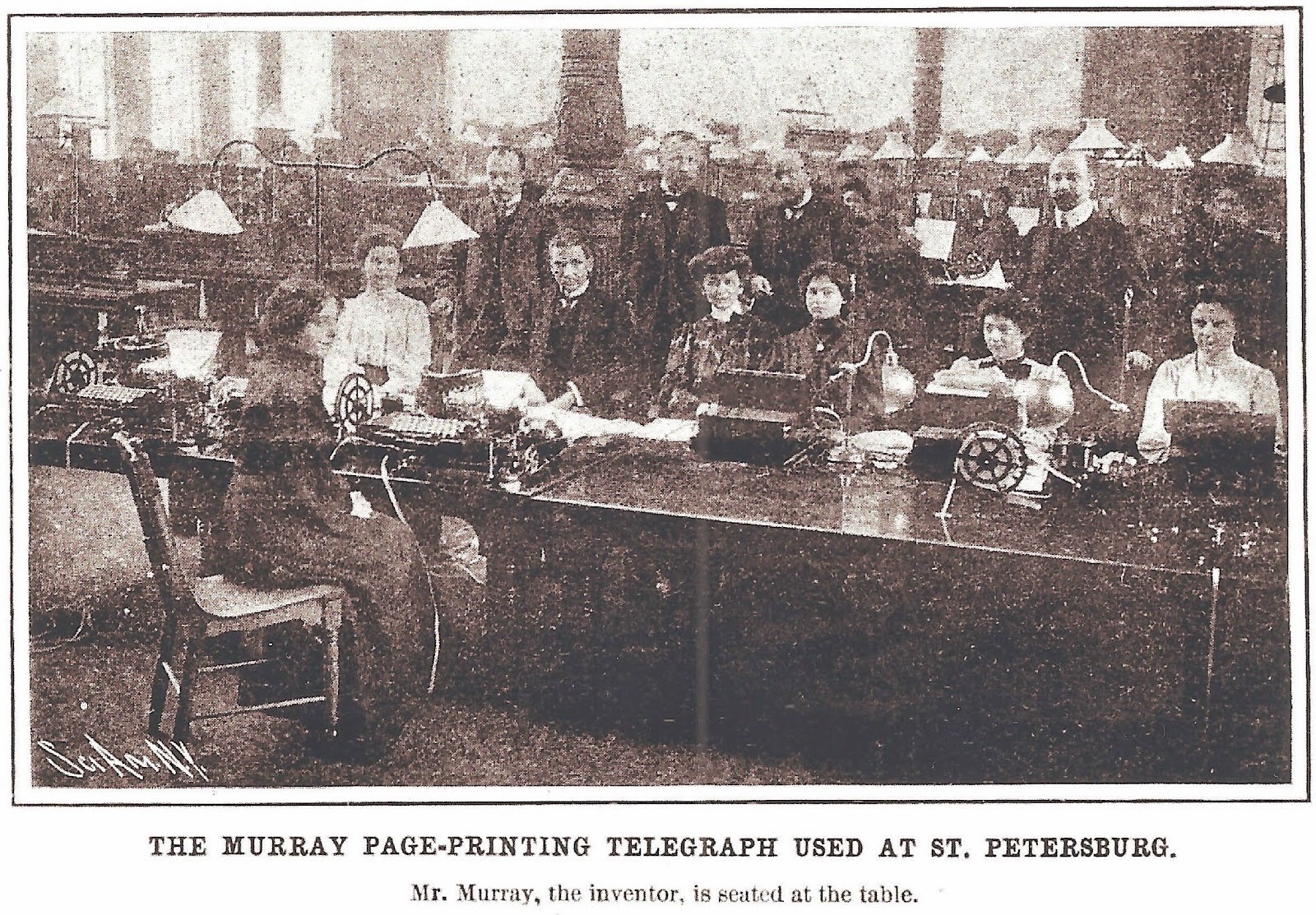 My chance discovery of Murray came about rather fortuitously, in March 2012, when I found and translated a Japanese entry from Koichi Yasuoka. I was stunned to realise Murray and his inventions were so little known. In the English language, at least, Murray had been completely forgotten about to that time. There was a lot of interest in my Murray blog post, and subsequently he found his way on to Wikipedia (I didn't write that sketchy entry, I hasten to add). However, Murray has yet to be recognised by either the Australian or New Zealand dictionaries of biography.

The New Zealand Herald (Auckland), January 13, 1930
Tony Olmo's email last week and my search for cypher typewriters immediately put me on to yet another completely forgotten yet ingenious New Zealand inventor, Morgan Cyprian McMahon O'Brien. Like Murray, O'Brien has no entry in Te Ara's New Zealand Dictionary of Biography, and there is incredibly little known about him. There are some scan references to him online, mostly just to his patents. 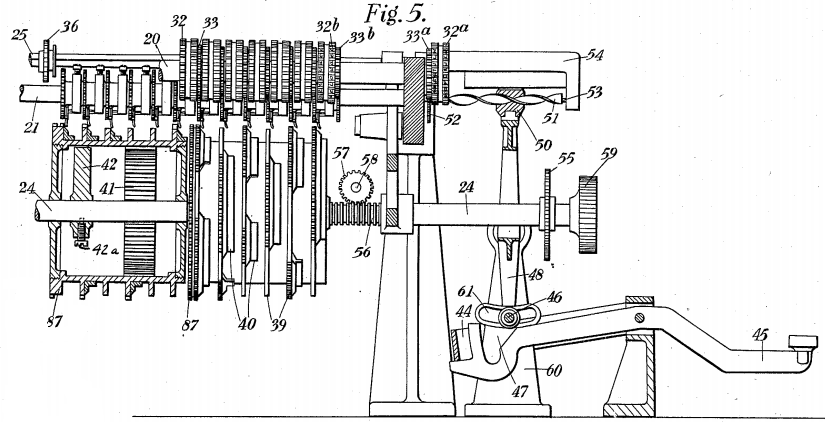 O'Brien was born in Auckland on September 25, 1886. His father, Charles, came from Youghal in the south of Ireland, once the home of Sir Walter Raleigh. Although O'Brien finished high in the New Zealand civil service examinations in 1904, when was 17, by 1911 he had became a miner. And not just in any mine, but at the infamous Waihi mine in the Hauraki district. Indeed, he was working there during the tragic miners' strike of 1912.  O'Brien continued to work in gold mines in the Thames Valley district until 1914, when he enlisted as a field artillery gunner in the main body of the New Zealand Expeditionary Force headed for Egypt and Gallipoli. He survived the war, returned to New Zealand, then left for Sydney in the early 1920s, travelling on to Vancouver and through Montreal for London, apparently with a wife and father-in-law. 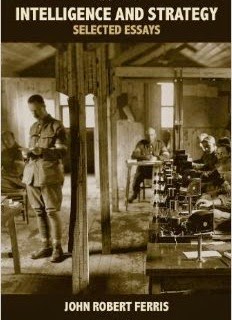 What happened to him beyond that time I cannot say, but these extracts from a chapter called 'Britain's "Enigma"' in the 2005 book Intelligence and Strategy: Selected Essays , by John Robert Ferris, tell something of O'Brien's later career: 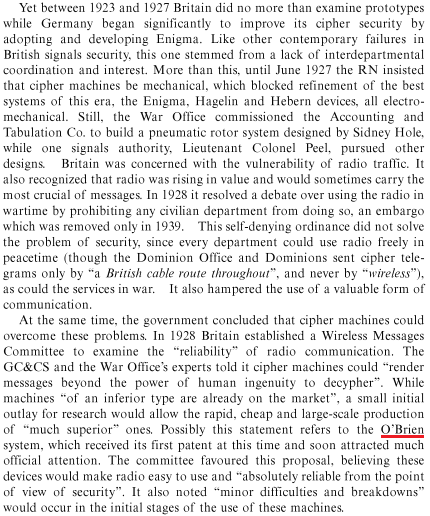 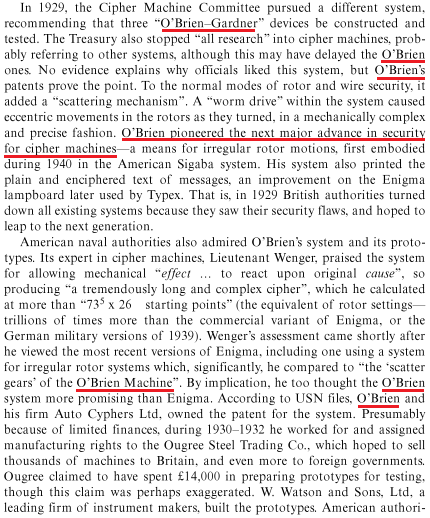 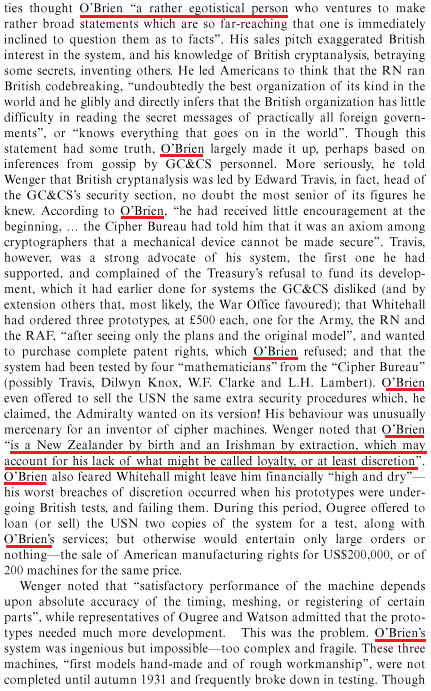 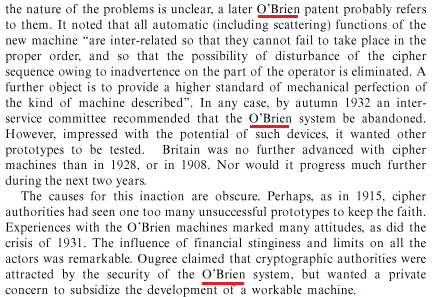 I wonder whether Auckland U. will highlight Murray's late "philosophy" praising Hitler and casually endorsing genocide. Methinks not!

I doubt AU will, but I did raise it in Friday's conversation, and was told he wasn't a fascist but merely into eugenics. To which I quickly replied, "So was George Bernard Shaw".

Yes, there were eugenicists all over the world, I suppose. Still, I can't get one line out of my head from Murray's "The Philosophy of Power." If I remember it correctly, it goes: "There are entire races of men which I would not mind seeing wiped off the face of the earth."

I did say they were both "odd fish".