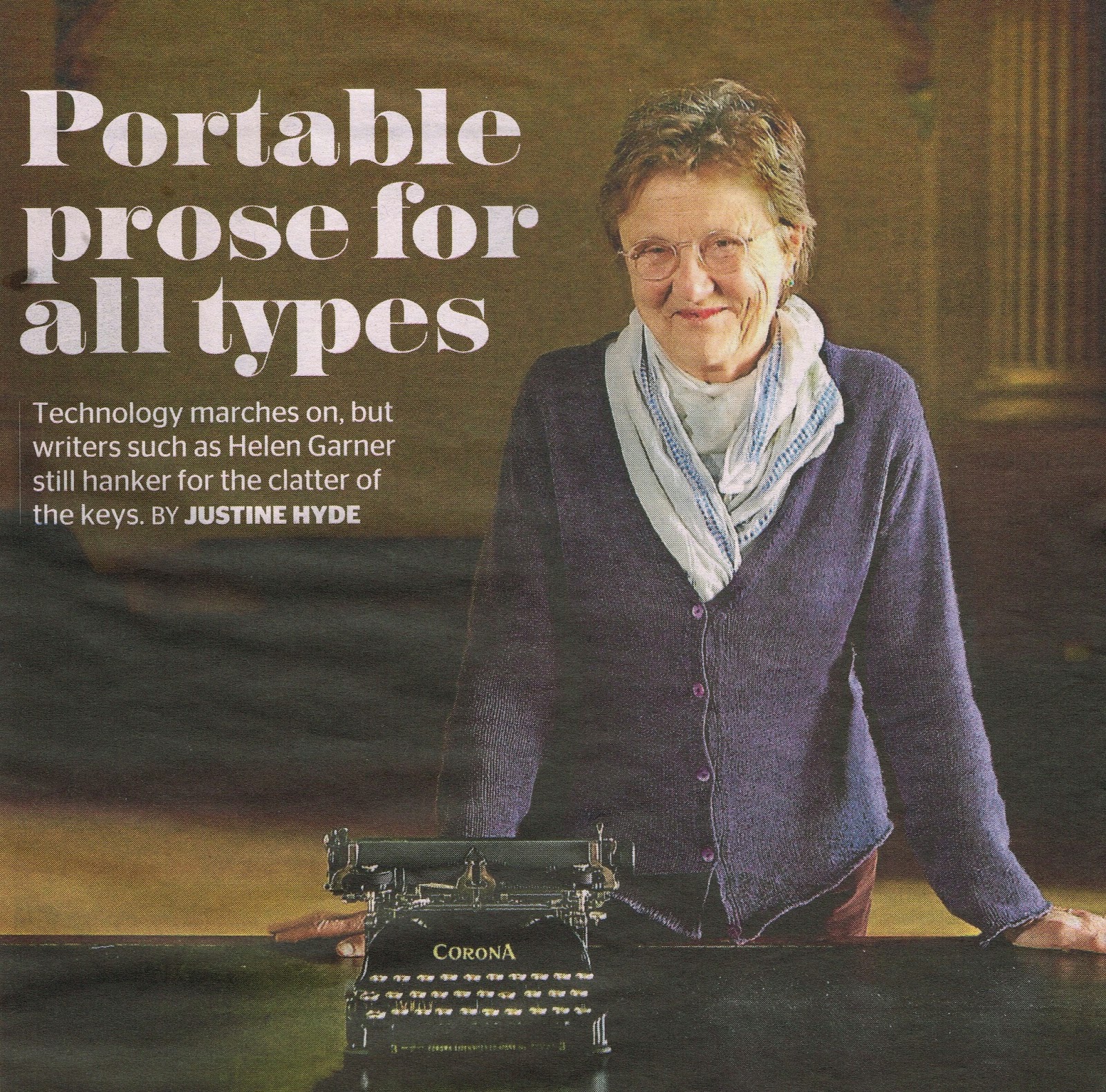 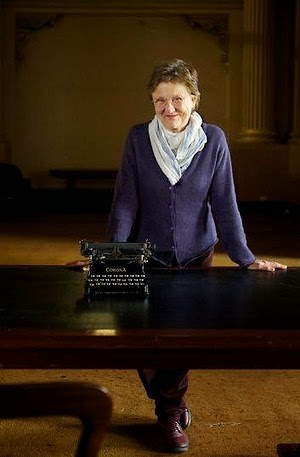 Helen Garner with her beloved Corona. 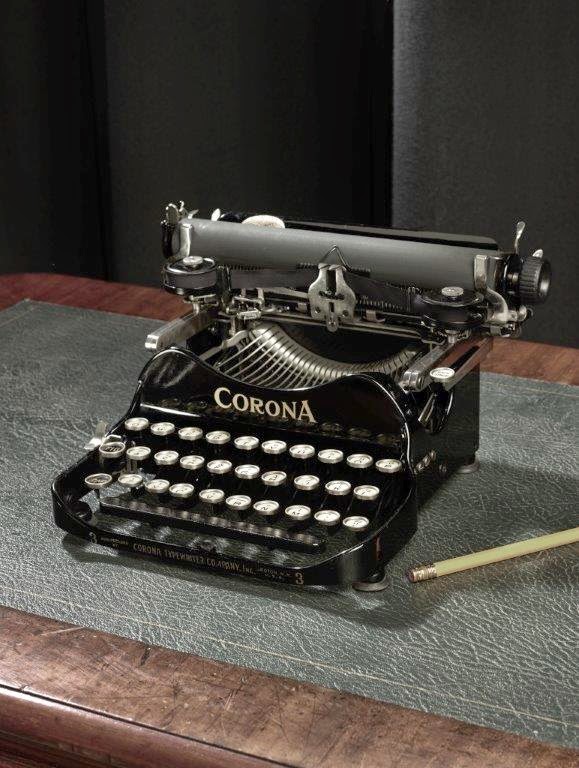 This article appeared in the Melbourne Age Spectrum liftout this morning:

Clack of typewriters captivates authors
"When we were young the keys struck the paper with such authority and power that on the other side of the sheet you could feel the indentations with your fingertips," Helen Garner says. "Now that was writing."
By Justine Hyde*
For most of us, the mechanical staccato of the typewriter has faded into memory. The push of the heavy carriage, the slap of the keys striking paper, the fingers ink-stained from replacing ribbons – all sweet nostalgia for an obsolete technology. The digital world marches on.
Not so for a dedicated band of typewriter enthusiasts, collectors and artists who are leading a revival driven by their deep affection for these machines. In fact, some writers never stopped using them. Today, you are more likely to find a vintage typewriter restored for sale in a high-end vintage shop, rather than out on the nature strip for the hard rubbish collection.
Underwood. Hermes. Remington. Olivetti. Brother. Ask any typewriter devotee to name their favourite machine and they will reel off a list of beloved brands. 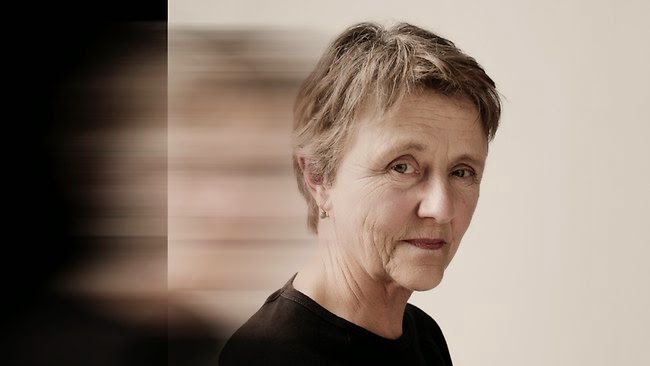 It was a sleek 1915 black Corona portable that first seduced author Helen Garner. "I was crazy about its romantic brand name," she says. "The smell of oil when I opened the lid of its box made me feel like fainting with happiness." Ernest Hemingway was similarly intoxicated, dedicating a poem to his Corona and stating that it was the only psychiatrist to which he had ever submitted.
Garner's handsome folding typewriter belonged to her grandmother, Alfreda Gadsden, who she describes as "a chic and perfumed person, generous but rather tough". Garner can't remember how old she was  when she took possession of the Corona from her grandmother, or whether it was a birthday or Christmas gift. "It just manifested in my life. I mooned around her for a long time, dropping hints about the typewriter. She must have cracked eventually and handed it over," she says.
Garner's fondness for typewriters grew from there. While she flirted with other makes and models, she never parted with her Corona. "I kept it in a cupboard for years, lugging it from house to house whenever I moved, which was often." To add to its charm, Garner discovered that Danish writer Isak Dinesen had owned the same model. "Suddenly my heavy old machine, already hopelessly superseded, seemed even more of a treasure," she says. 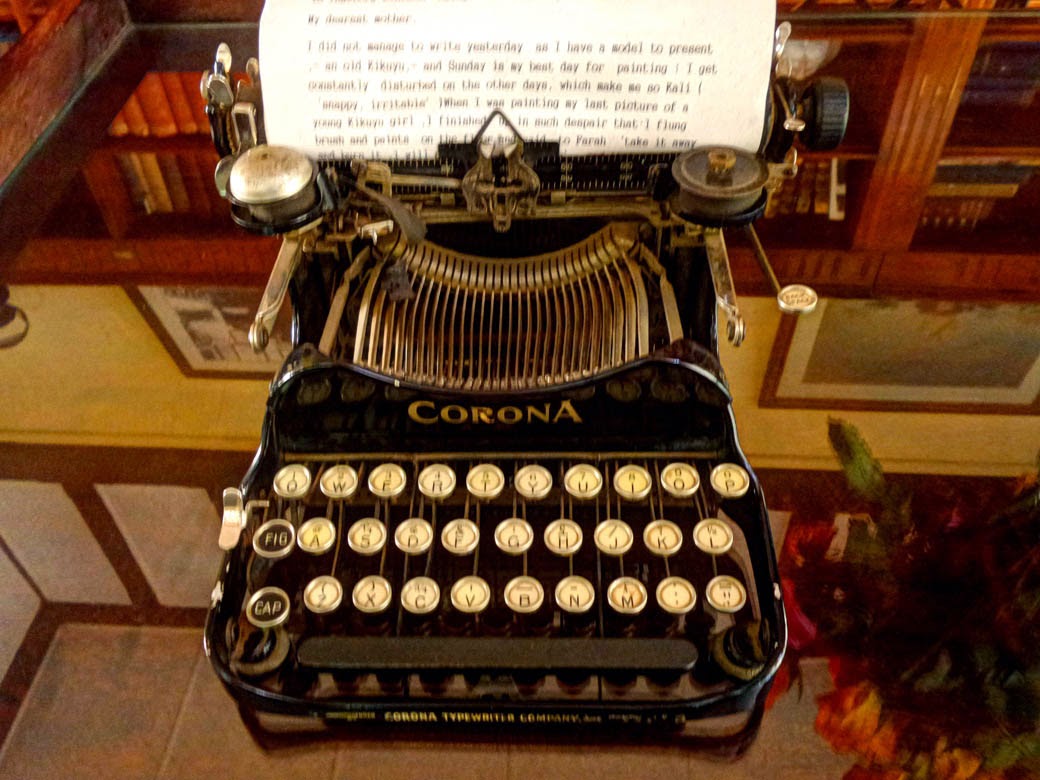 Karen Blixen's Corona 3
Garner's devotion is shared by Robert Messenger, owner of the Australian Typewriter Museum in Canberra. Messenger, who revels in the "sheer beauty of the machine with so many variations", says his passion for typewriters was ignited during his days as a print journalist. In the early 1960s,  journalists could choose a typewriter and then have their pay docked a few shillings each week to pay for it.  "I had eyed a typewriter in the store for months, and when I had the chance, knocked over several little old ladies to get to it," he recalls.
Messenger started seriously collecting when he spotted a shiny black Imperial portable typewriter in a shop on the New South Wales south coast. The real turning point was discovering eBay. At the peak of his collecting, Messenger amassed 903 typewriters. He has since pared this back to  390, displaying 250 of these in his museum. Visitors can try out an impressive array of vintages, from an 1878 Remington through to a 2013 Royal, which is still manufactured in China and sold through Amazon.
The collection springs from Messenger's "great fascination in typewriters as an outmoded technology". For him, their true wonder is the fact that he can take his 1893 Blickensderfer typewriter anywhere, "to the desert, a mountain top, Antarctica – and I can write. I just need paper. The ink is still working after 120 years." No electricity or batteries required.
The functional simplicity and singular purpose of typewriters explains why some writers still prefer to bang out sentences on their keys, shunning computers and their myriad distractions of email and social media. "Once you get onto a typewriter you can forge on with your creative urge," Messenger says. 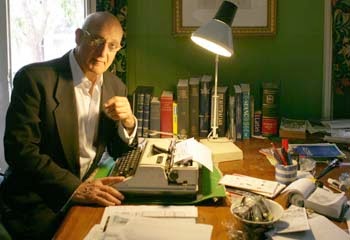 David Malouf, author of Typewriter Music
Paul Auster, Don DeLillo and Cormac McCarthy are among the literary heavyweights who favour the cranking carriage and inky ribbon. Closer to home, David Malouf and Les Murray write their poems on typewriters. Messenger reasons that this is because typewriters do not dictate your writing style, for example, by capitalising the beginning of lines of poetry, like Word does.
Throwing off the shackles of digital technology also appeals to Luke Sinclair, a zine-maker and coordinator of Melbourne zine store Sticky Institute. Sinclair uses only typewriters and photocopiers to make his zines.  "I don't use computers at all," Sinclair says. "One of the integral parts about a zine is their honesty. With a typewriter you can't get rid of mistakes. Mistakes become an integral part of the finished artwork. I think that's beautiful." 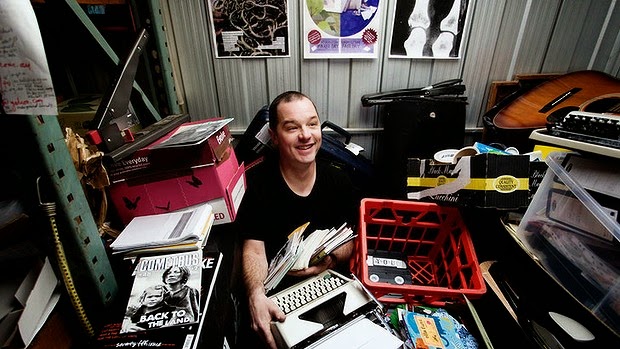 Luke Sinclair
Collectively, typewriter fans form the "typosphere", a community of devotees, collectors, artists and makers. Their analog fetish is on show in blogs, and they gather at "type-ins", events held in bars, bookshops and even on New York City trains and Melbourne trams.
The typewriter revival does not end there. In September, actor Tom Hanks released Hanx Writer, an iPad app that recreates the sound and pace of a manual typewriter.
In 2009, Pulitzer Prize-winning author Cormac McCarthy's beaten-up Lettera 32 Olivetti was auctioned for more than $US250,000. McCarthy bought the machine in 1963 for $50 and wrote all of his novels over 50 years on the Olivetti. Explaining why a typewriter would fetch such a price, Des Cowley, of the State Library of Victoria, says: "All the value is laden on by the spirit, ambience and the mystique of the object ... not by any integral value". Cowley says visitors to the State Library are fascinated to see the tools that helped authors create their favourite books. 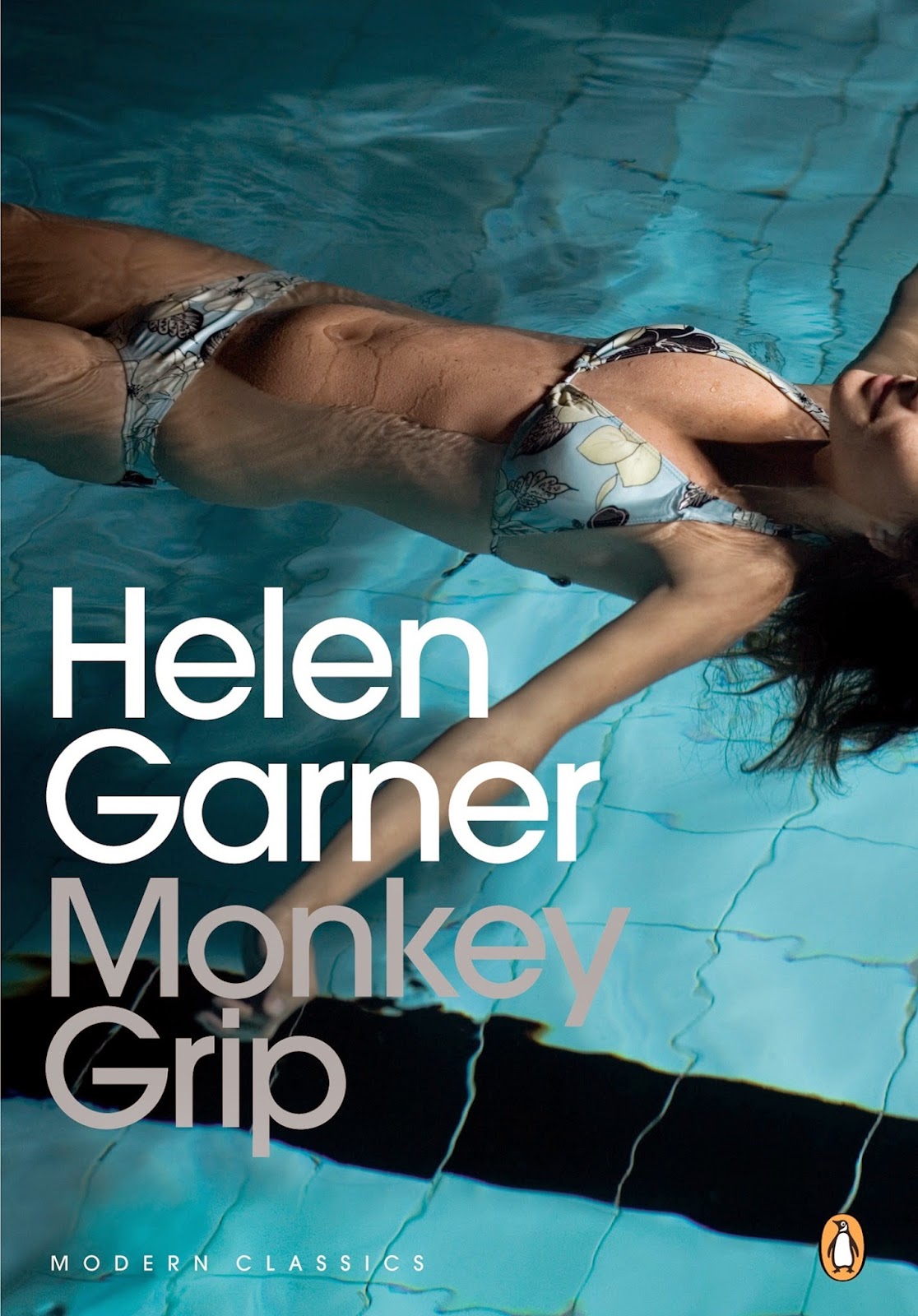 To this end, Helen Garner has loaned her cherished Corona to the library, to be exhibited alongside her manuscript for Monkey Grip. "It's a wonderful narrative and story for people," Cowley says. "It will give a sense of a writer at work."
When Garner agreed to lend her typewriter to the library, the carriage was jammed. Cowley searched the internet and found "Tom the typewriter guy" in Carlton. 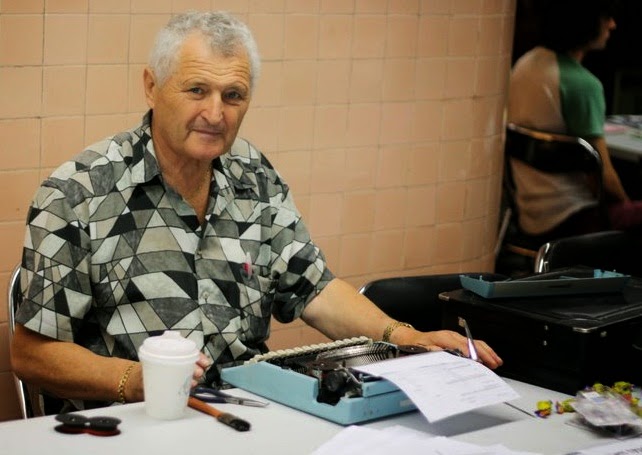 Tom Koska
Tom Koska has been fixing and selling typewriters since the 1960s in his Elgin Street store. "He's one of the few ... left in Melbourne who can go under the bonnet of a typewriter and fix it," Cowley says.   "I went to visit him and he remembered Helen [Garner] coming in, in the 1970s. She bought some of her early typewriters from him. He was really chuffed to be working on her typewriter again."
It was the curious hands of Garner's granddaughter that temporarily disabled her Corona. "It's the first typewriter my grandchildren have ever seen close up, or touched," she says. "They stand around it in awe. All that oil and steel and moving parts ... and the tremendous clatter it makes – how primitive it must seem to them." Garner remembers buying quarto paper in reams when "the shop assistant counted out the sheets with a special flick of the wrist and wrapped them in paper with string".
"When we were young the keys struck the paper with such authority and power that on the other side of the sheet you could feel the indentations with your fingertips," Garner says. "Now that was writing." 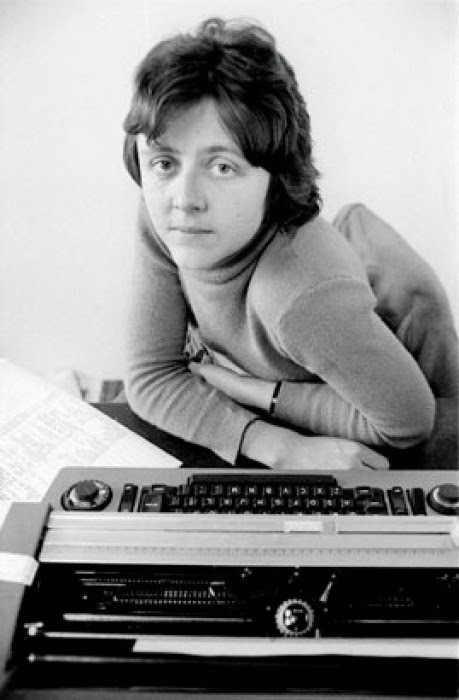 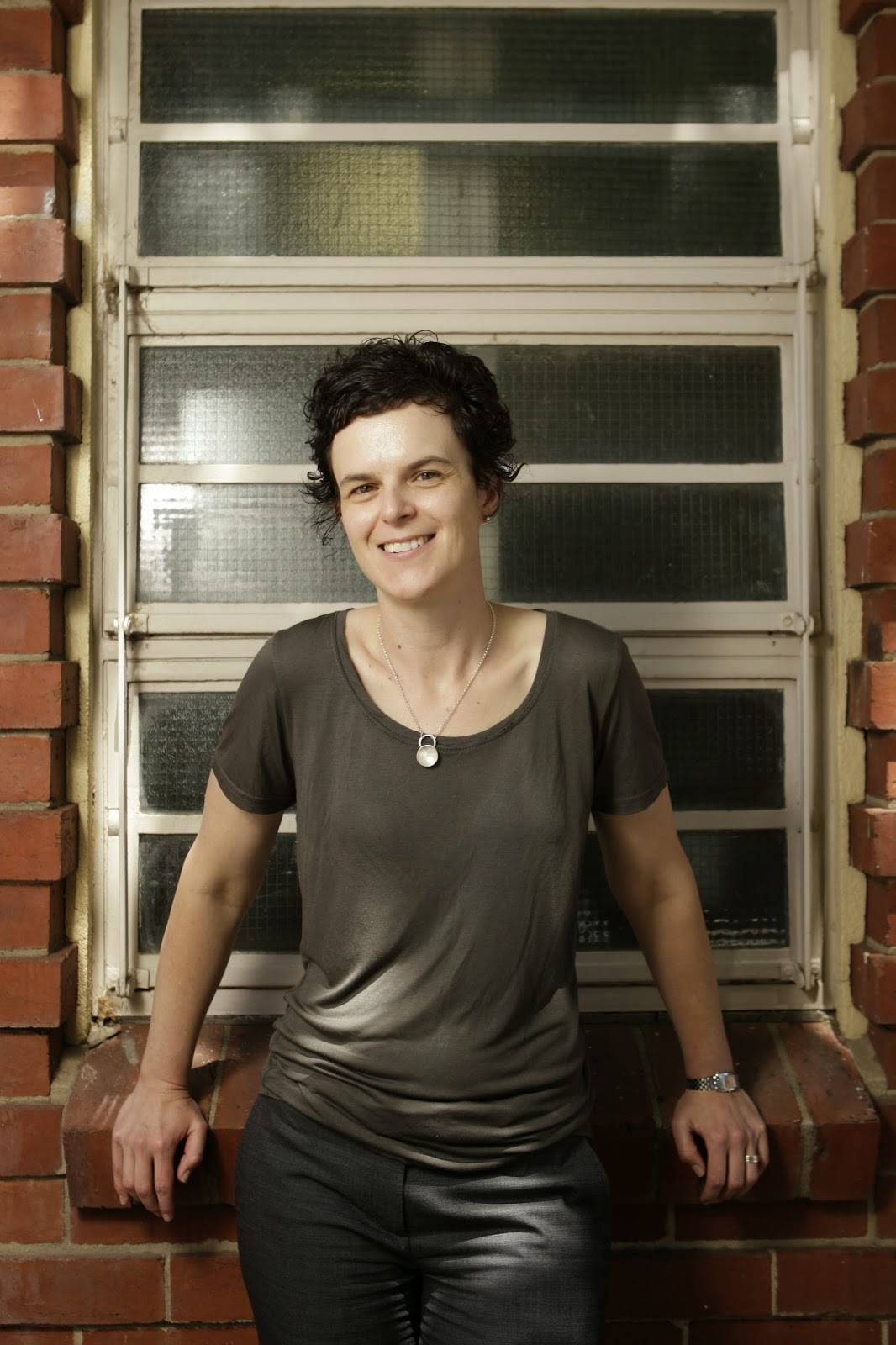 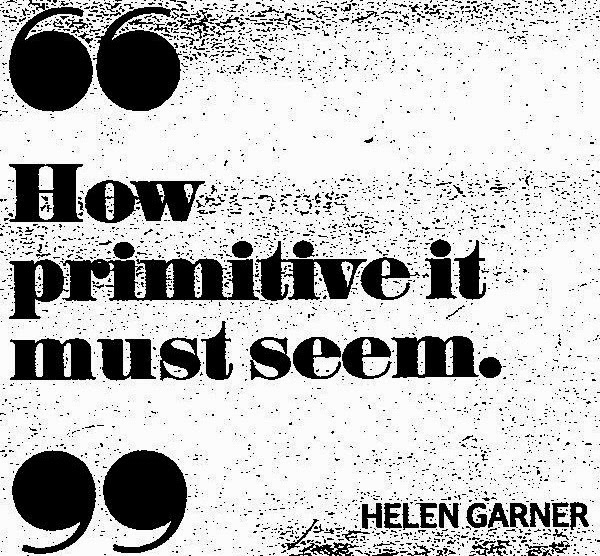 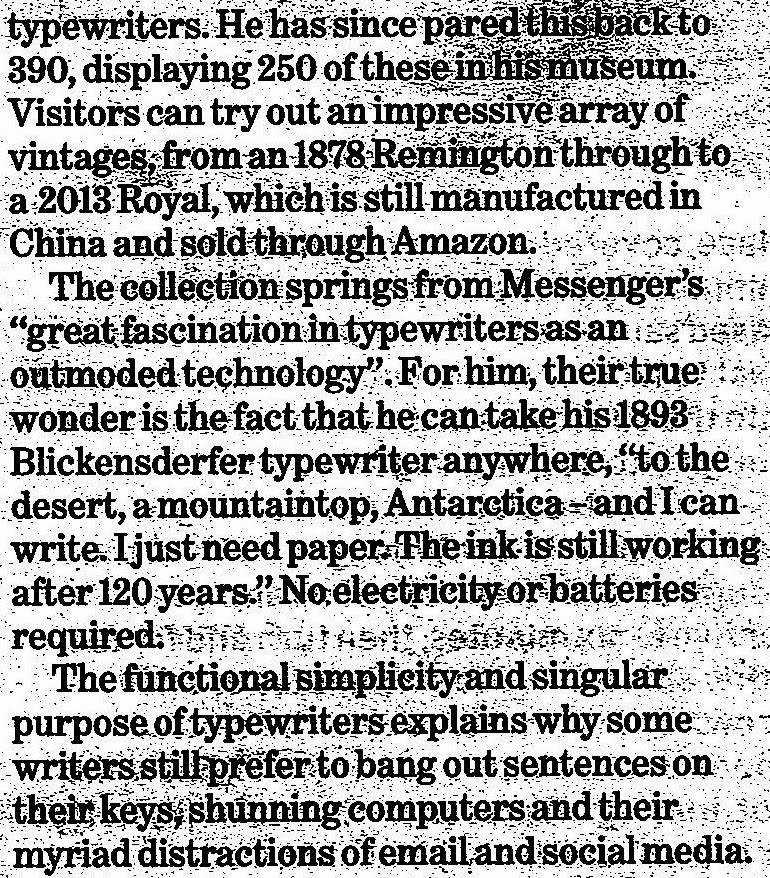 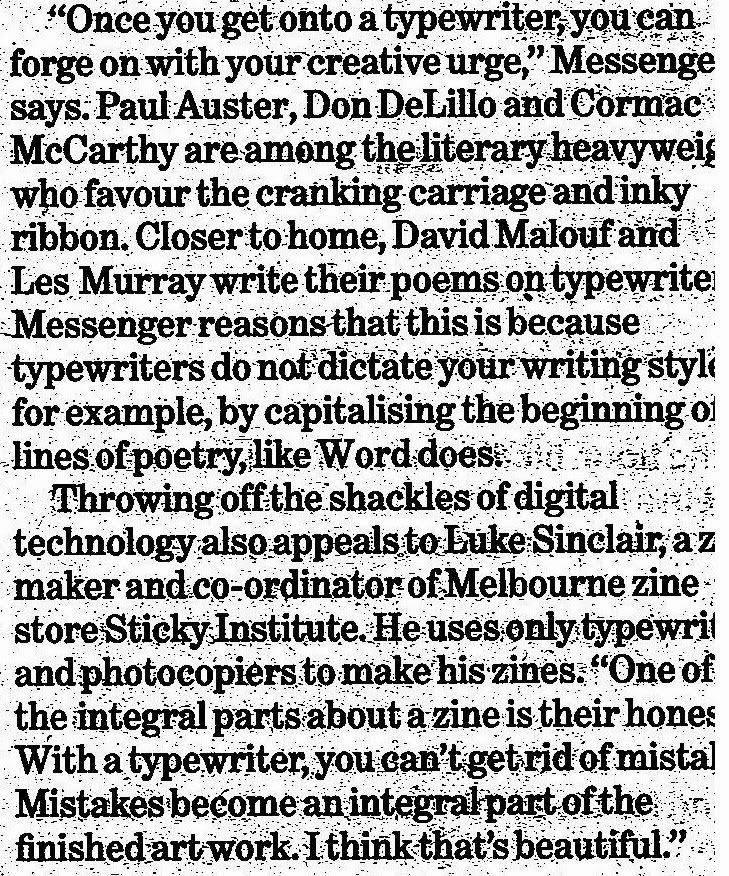 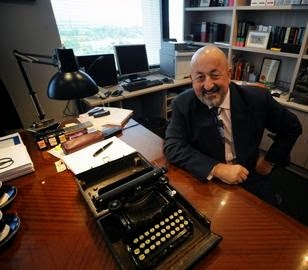 Canberra barrister Jack Pappas and typewriter collector Jack Pappas was made famous in Helen Garner's book Joe Cinque's Consolation, after he defended student Anu Singh on a charge of killing her boyfriend in 1997 by lacing his coffee with Rohypnol then injecting him with heroin.
Posted by Robert Messenger at 07:40

Always nice to hear of an author who love typewriters. Her Corona 3 looks factory fresh.

Very nice story! And I didn't spot any errors -- I suspect you must have been a research helper as well as an interviewee.