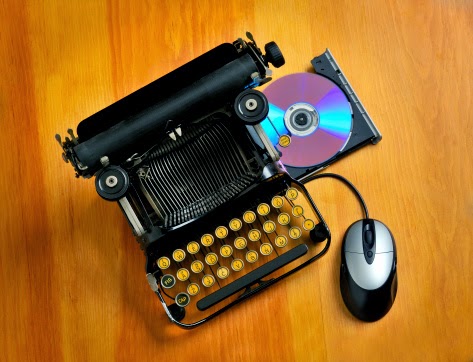 I'd only just mentioned Harrisburg, Pennsylvania, in a blog post last week - in relation to golf champion and course designer Max Howell Behr overseeing the manufacture of the Bennett typewriter by Elliott-Fisher there in 1910 - when to my utter astonishment I found a letter postmarked Harrisburg in my mail box. The return address was typewritten and the envelope sealed with lipstick red wax. How intriguing!
Inside was a charming typewritten letter from Harrisburg author and journalist Monica Schroeder, thanking me for a blog post in May about fixing the ribbon vibrator on a Facit T2 standard. Little did I think at the time of posting that I would be solving a problem for someone in Pennsylvania.
I did say that I was no saint, but that my cries to heaven upon getting my T2 working could be heard in far-off Cincinnati. Richard Polt commented, "I thought I heard some joyful shouting from the Antipodes!" Well, now we know it reached Pennsylvania, too. Monica's letter opened:

Monica's T2, Brigeet, has joined her growing collection, which includes an LC Smith 3 (she could do with some help on getting the carriage to advance), a 1938 Underwood Universal called Lucille, a Smith-Corona Coronet, a Remington 1 portable, a Sears Celebrity with script font, and an Olivetti Studio 44, all within a few months. When Monica wrote she was waiting the arrival of a Corona 3, a Royalite, a Skyriter and a Robotron. I'd say she's well and truly hooked.
Thanks you, Monica, for the lovely letter. 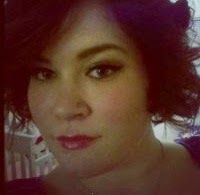 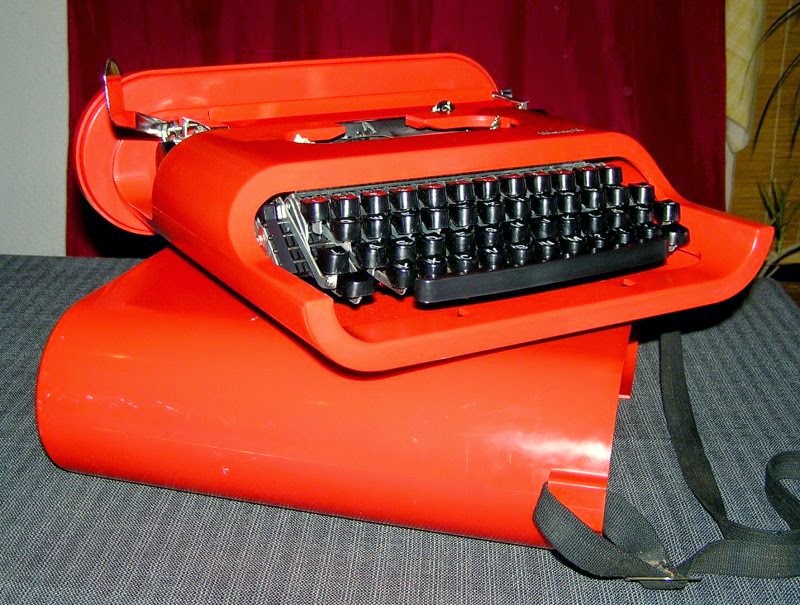 I guess it had to happen, but it looks like the Monpti is becoming the new Valentine. David Lawrence in Auckland, New Zealand, alerted me last night to this listing on eBay (#321535204924) - 'buy it now' price $US489. The seller, with whom I had have pleasant dealings in the past (I bought an African mahogany Rheinmetall from him), includes a two-minute video with his listing to prove this Monpti does work. Which means it's not just a rarity, but a rarity among rarities! Neither of my two Monptis performed anything like this.
David also drew my attention to a beautiful Postal for sale at $1795.95. I see there are also two Odells, at $299.99 and $685, a Varityper for $99.99 and this Geniatus at $62, after 10 bids: 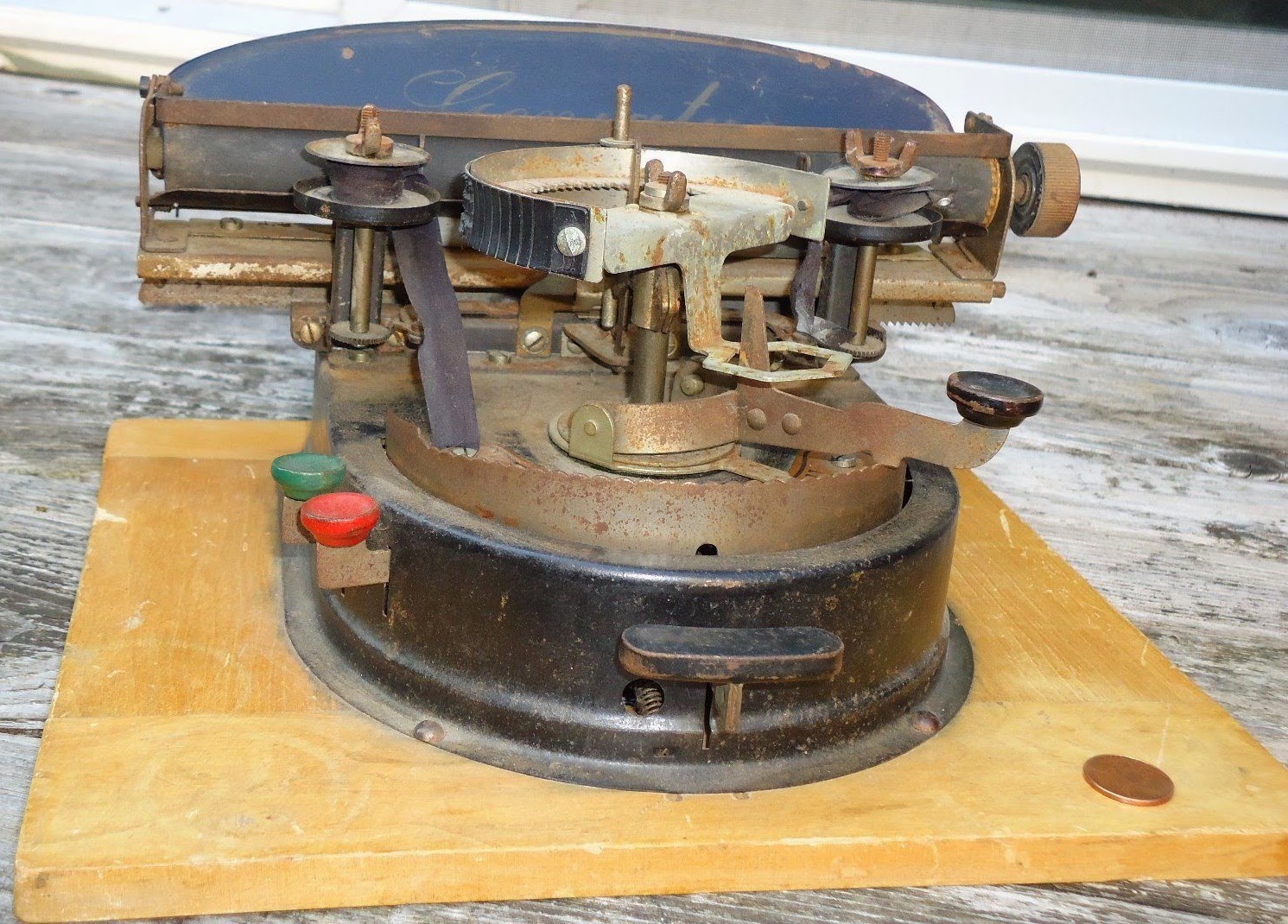 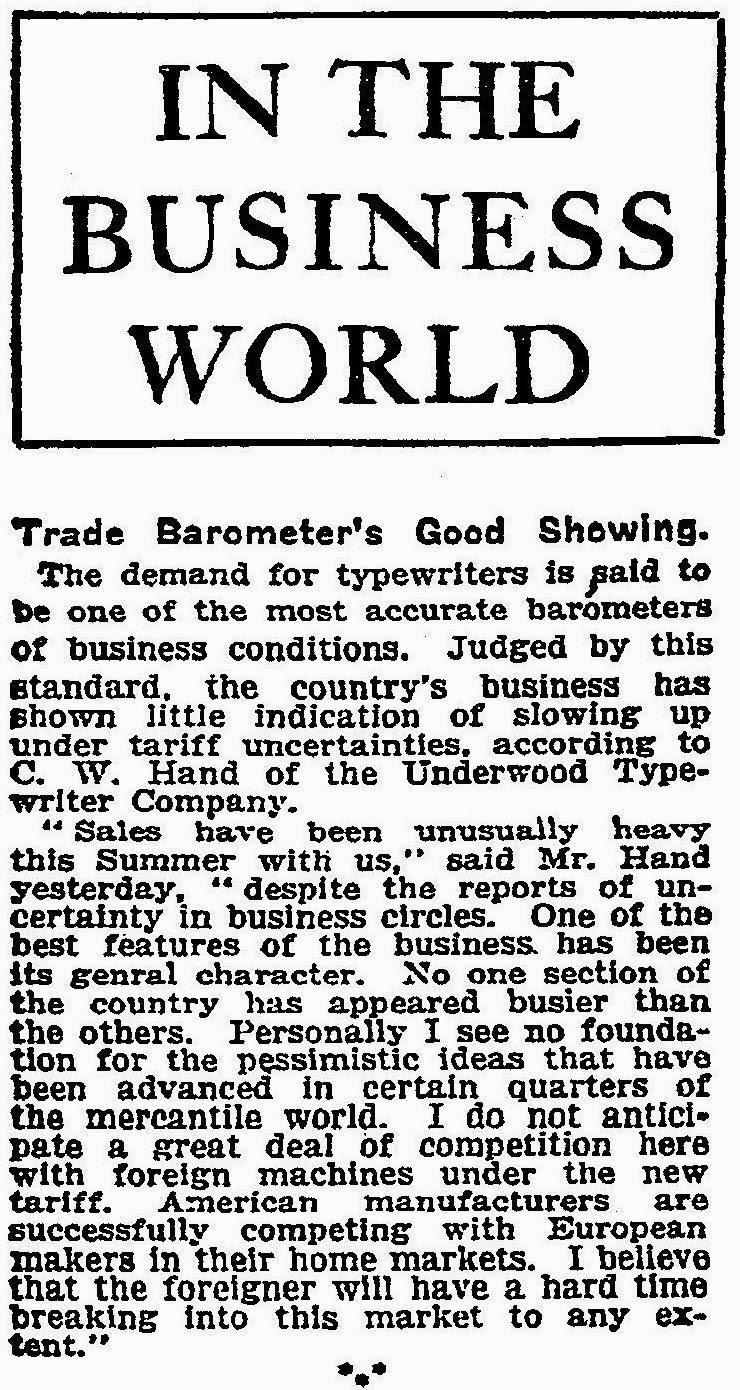 From The New York Times on August 12, 1913. One hundred and one years further on, the demand for typewriters is a barometer of these rather different conditions:
1. Mental and physical well-being.
2. A high level of common sense.
3. Greater appreciation of the higher things in life.
4. Happiness, contentment and creative achievement.
5. Absence of RSI.
6. Reduction of bad language (called Twainism).
Please fell free to add to this list.
*** 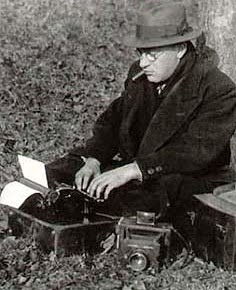 Egon Erwin Kisch as a reporter
While last week researching the story of Katharine Susannah Prichard, whose Remington 1 portable I am temporarily caring for, I came across reference to her helping the cause of Egon Erwin Kisch. This was timely, as just two weeks ago the Australian Government announced plans to relax “unnecessarily restrictive” elements of the skilled foreign worker visa scheme, including rigid English language proficiency rules. 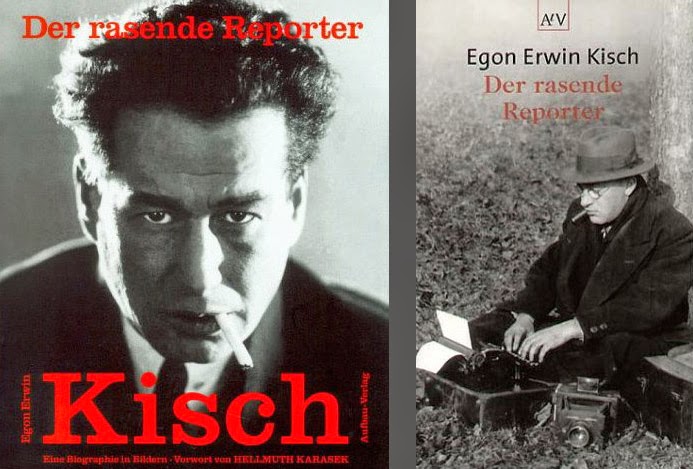 Kisch (1885-1948) was a Czechoslovak writer and journalist, who wrote in German. Nicknamed the "Raging Reporter from Prague", Kisch was noted for his development of literary reportage and his opposition to Adolf Hitler's Nazi regime. In World War I, Kisch was a corporal in the Austrian army and fought on the front line in Serbia and the Carpathians. He deserted in October 1918 and played a leading role in the abortive left-wing revolution in Vienna in November that year. In 1919 Kisch became a member of the Austrian Communist Party and remained a Communist for the rest of his life. 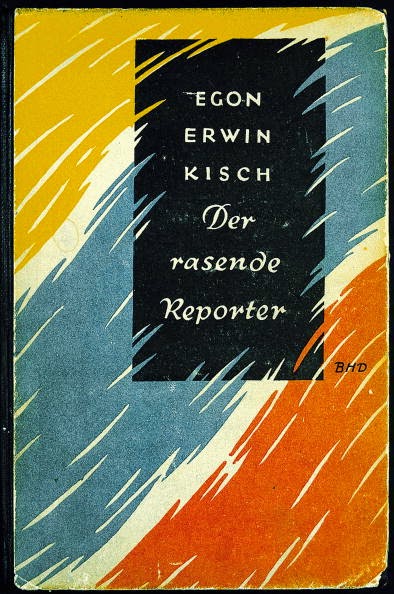 On February 28, 1933, the day after the Reichstag Fire, Kisch was one of many prominent opponents of Nazism to be arrested. He was briefly imprisoned in Spandau, but as a Czechoslovak citizen was expelled from Germany. 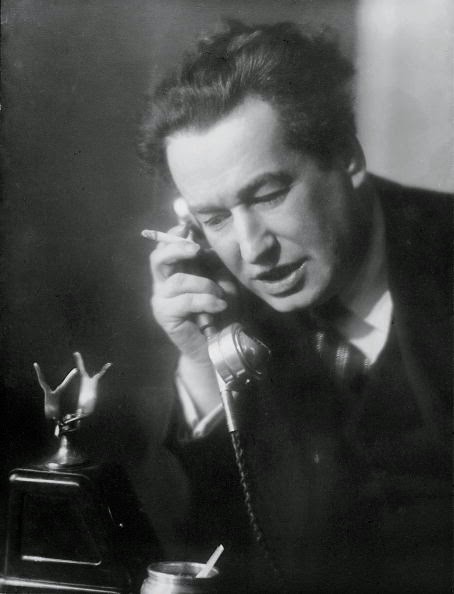 In late 1934 Kisch came to Australia, initially planning to be a delegate to an anti-fascist conference. The Australian Government refused him entry from the ship Strathaird at Fremantle (where Prichard was in the welcoming committee) and Melbourne. Kisch then took matters into his own hands. He jumped 16 and a half feet from the deck of his ship on to the quayside at Melbourne, breaking his leg in the process. He was bundled back on board but this dramatic action mobilised the Australian left in support of Kisch, including Prichard. When the Strathaird docked in Sydney, proceedings were taken against the captain on the grounds that he was illegally detaining Kisch. Justice Bert Evatt (later Leader of the Australian Opposition and a key figure in establishing the UN) ordered that Kisch be released. Under the Immigration Restriction Act 1901, visitors could be refused entry if they failed a dictation test in any European language. This law was used to enforce the White Australia Policy by ensuring that potential Asian immigrants were given an impossibly hard test. 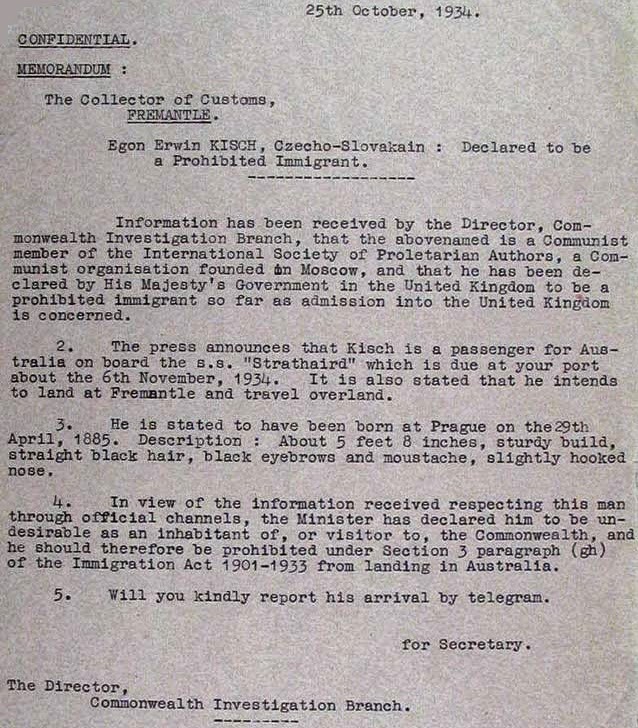 As soon as Kisch was released, he was re-arrested and was one of the very few Europeans to be given the test; he passed the test in various languages but finally failed when he was tested in Scottish Gaelic. The officer who tested him had grown up in northern Scotland, and did not have a particularly good grasp of Scottish Gaelic himself. The High Court found that Scottish Gaelic was not within the fair meaning of the Act, and overturned Kisch's convictions for being an illegal immigrant. In February 1935, Kisch addressed a crowd in the Sydney Domain warning of the dangers of Hitler's Nazi regime, of another war and of
concentration camps. 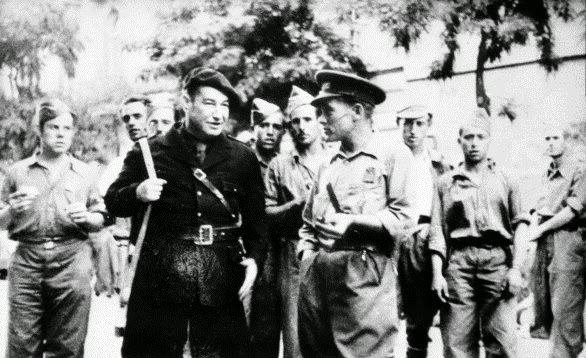 Kisch in Spain
In 1937 and 1938, Kisch was in Spain, where left-wingers from across the world had been drawn by the Spanish Civil War. He travelled across the country, speaking in the Republican cause, and his reports from the front line were widely published.
In late 1939, Kisch and his wife Gisela sailed for New York where, once again, he was initially denied entry. He eventually landed at Ellis Island on December 28, but as he only had a transit visa moved on to Mexico in October 1940. He remained in Mexico for the next five years, one of a circle of European communist refugees. Kisch died two years after his return to Prague, shortly after the Communist party seized complete power. 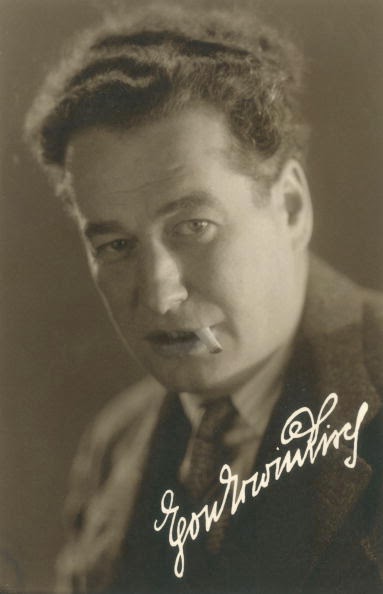 Kisch's work as a writer and communist journalist inspired Australian left wing intellectuals and writers such as Prichard. This group formed the nucleus of what later became the Writers League,  drawing on the example of Kisch’s own journalistic dedication to reportage.
*** 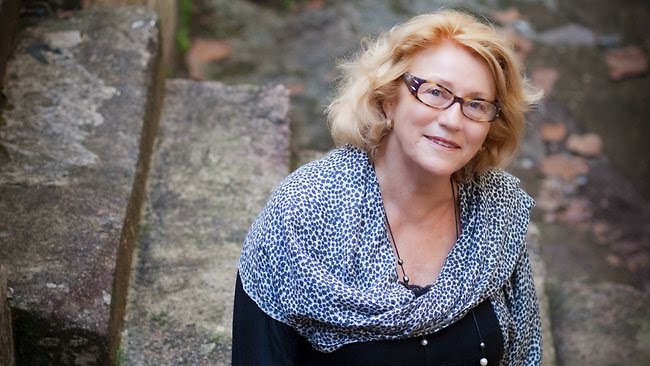 Janet Holmes à Court
There was another odd twist with the Prichard typewriter. Back in May I heard a revealing ABC radio interview in which Janet Holmes à Court, widow of Australia's first billion dollar businessman, Robert Holmes à Court, told Richard Fidler she had been raised by closet Communist parents. When visitors arrived, her family had had to hide Communist literature in the house.
Mrs Holmes à Court then went on to describe the influence Katharine Susannah Prichard had had on her. "She [Prichard] left me two precious things," said Mrs Holmes à Court. I held my breath as Fidler probed, hoping she was going to say one of them was a typewriter. She didn't.
But a few days later I got a call from the Fellowship of Writers Western Australia to tell me it was sending me Prichard's Remington. In the circumstances, I could hardly believe my ears.
***
Anyone ever heard of an Avanti electric typewriter? I wonder what its bloodlines are. It looks like it could be another Nakajima product. This ad is from November 1985: 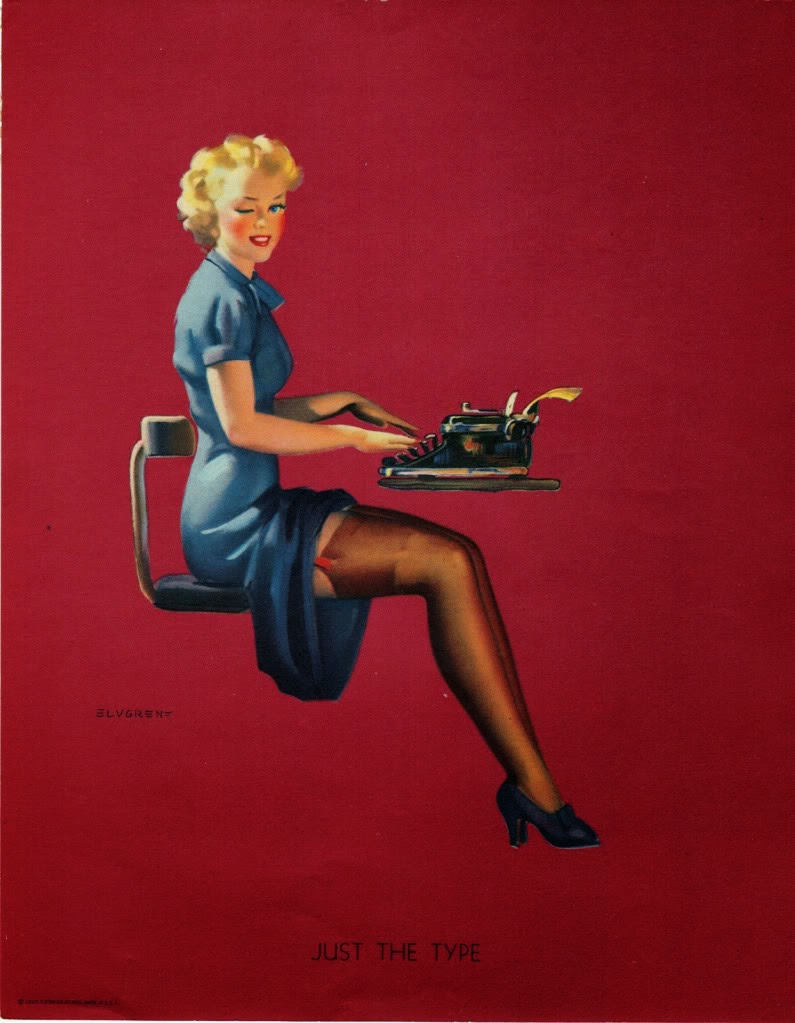 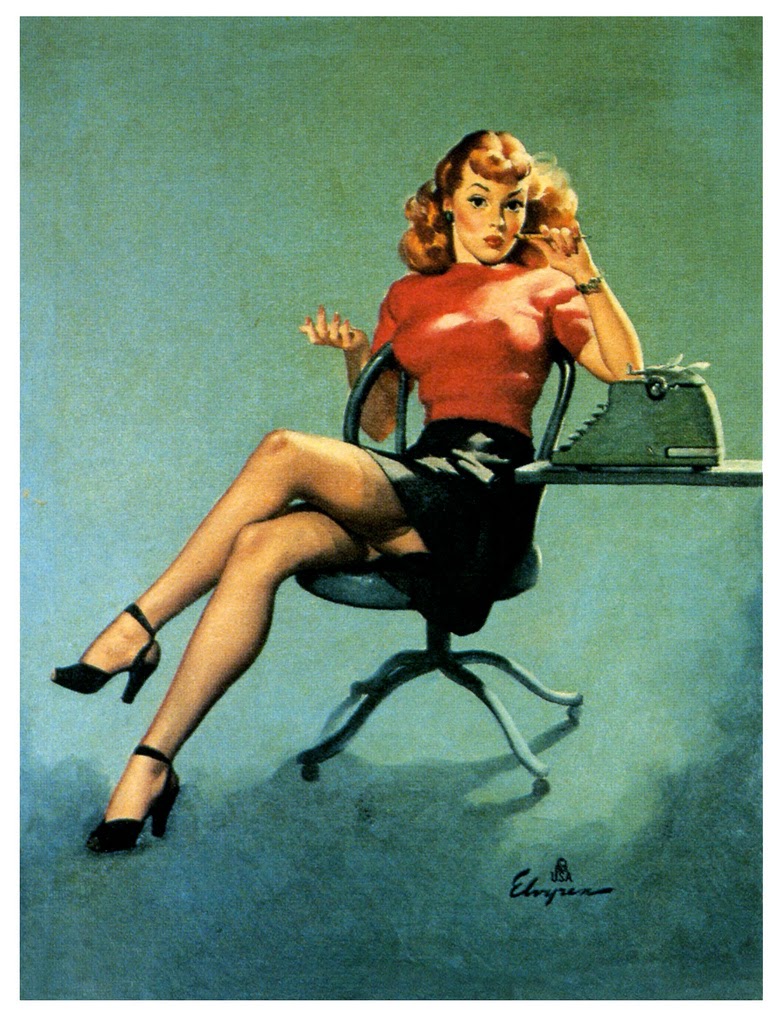 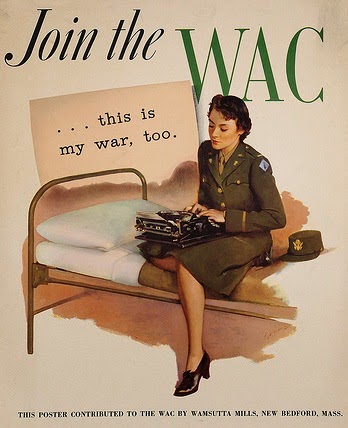 Posted by Robert Messenger at 22:35

I'm so glad you got my letter!! Thanks for the kind words and THANK YOU again for the tutorial.

Here's how twisted I am: I'm less interested in the redhead pinup than in that funny little (invented?) typewriter by her side.

Attractive chassis on both. sort of Underwood-ish? :D

Great to know there is another Typospherian in Harrisburg. I'll need to look her up on my next trip.

It's great to know you are a big help to others. I know between you and Richard P. I've learned a lot about typewirters.

I love the list. Same can't be said about the digital realm.