Why Form Must Follow Emotion: The Beauty of Typewriter Design 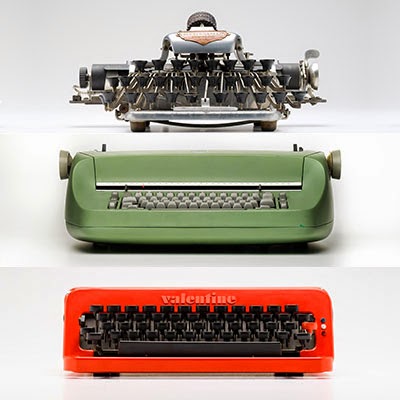 The Powerhouse Museum - Sydney's Museum of Applied Arts and Sciences - has yet again taken out of storage and dusted off its gleaming Blickensderfer 6 typewriter. The museum is showcasing its design and technology collection through a new exhibition called Interface: People, Machines, Design. The exhibition continues until October next year. See the web pages here. 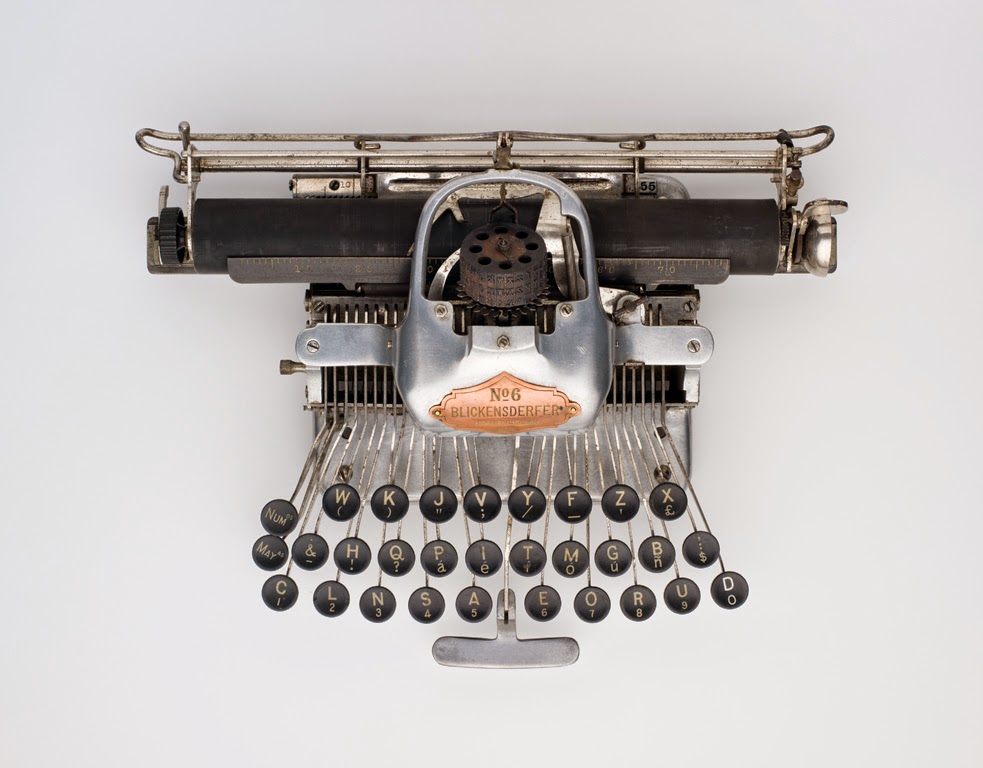 Interface: People, Machines, Design "features iconic products from the world’s most famous brands, including Olivetti, Braun and Apple [and] explores how a handful of companies, designers and industrial visionaries transformed clunky machines of a century ago and created the must-have items that we can’t live without today".
New South Wales Minister for the Arts Troy Grant said, “Each of us has memories of the technologies that have changed our lives. The mobile phone highlights the way technology and design has rapidly evolved, from the heavy object of a few decades ago to the sleek multifunctional device of today. This exhibition is a fine example of the way the museum’s collection can communicate the history of technological innovation." 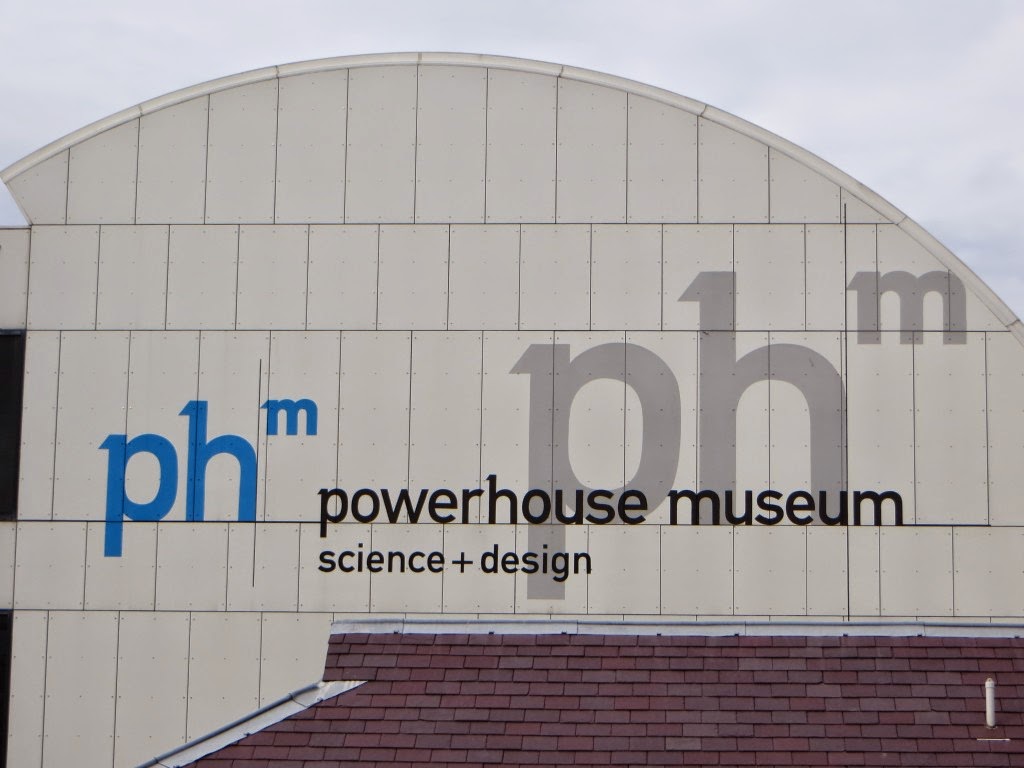 The Powerhouse says Interface: People, Machines, Design "plays homage to designers past and present and explores their philosophies and inspirations. The exhibition also reveals the design methods from 50 years ago that have stood the test of time and remain influential today. Design visionaries whose work is explored in the exhibition include: Dieter Rams, the German industrial designer who was Braun’s design visionary; Steve Jobs and Steve Wozniak, co-founders of Apple; Doug Engelbart, an influential figure of computer interface design; Olivetti designers Marcello Nizzoli, Ettore Sottsass and Mario Bellini; and Hartmut Esslinger, whose early Apple designs helped shape Apple’s transformation into a global brand; and current designer Sir Jonathan Ive. 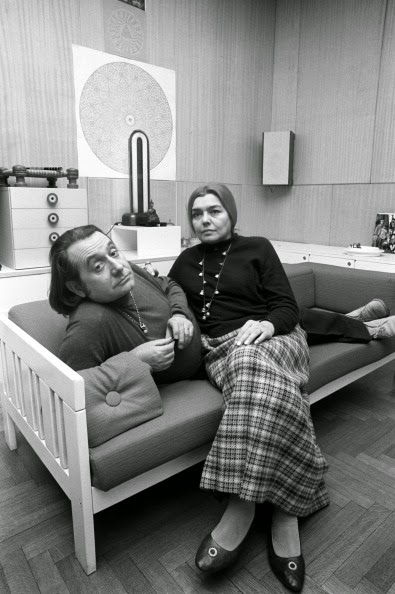 Ettore Sottsass at his home in Milan in March 1969, a month after the Olivetti Valentine was launched in Barcelona. He is with his wife, the Italian writer and translator Fernanda Pivano.
Esslinger was interviewed for a feature article by Stephen Brook in The Australian newspaper's Weekend A Plus supplement: 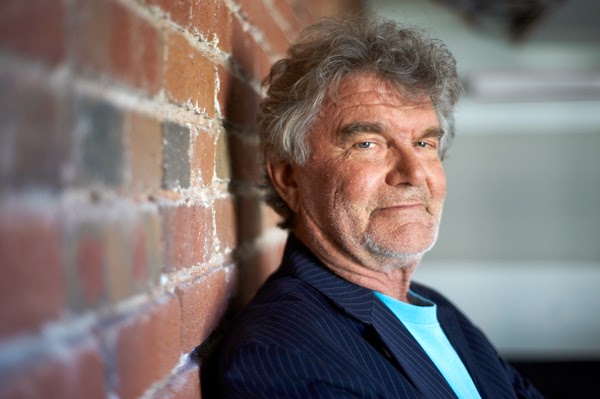 FORM follows function, the design mantra goes, but not in Hartmut Esslinger’s design world. For him, form follows emotion. “In modern products, there’s a lack of emotion and emotional appeal is really missing right now,” says the German-born designer, who divides his time between his homeland and the US.
And don’t get him started on the design mantra of functional simplicity. “That’s not beautiful. That’s boring. At one point in Germany, design sank into this mania of simplicity and I said, ‘Nobody feels anything about this stuff any more, you need more emotion.’ It was considered emotion wouldn’t work in Germany but I said ‘it sells better’.” Before Jonathan Ive there was Esslinger. His Frog design group was called in by Steve Jobs in the 1980s to help shape Apple’s transformation. That started with the Apple IIc, which was launched in 1984, the same year as the Macintosh, but the simpler home computer outsold its more sophisticated stablemate for years. In 1983 Esslinger pitched up at Apple as a design consultant, urging Jobs to revamp processes that placed designers at the mercy of engineers. Esslinger wanted one design leader at Apple, involved years ahead of any actual product development. He got it. Thus, the Apple IIc, the first to encapsulate Esslinger’s “Snow White” design scheme for Apple: horizontal and vertical stripes to give the illusion of a reduction in the machine’s volume, a three-dimensional Apple logo inlaid on the product case and an off-white colour scheme. More than 400,000 units sold that first year. Esslinger says now of the Apple IIc: “That was a little bit like a little friend; computers had been hostile before.” It was designed to impart a particular message to consumers: “I am an intelligent being, I am not a stupid radio just playing music.” 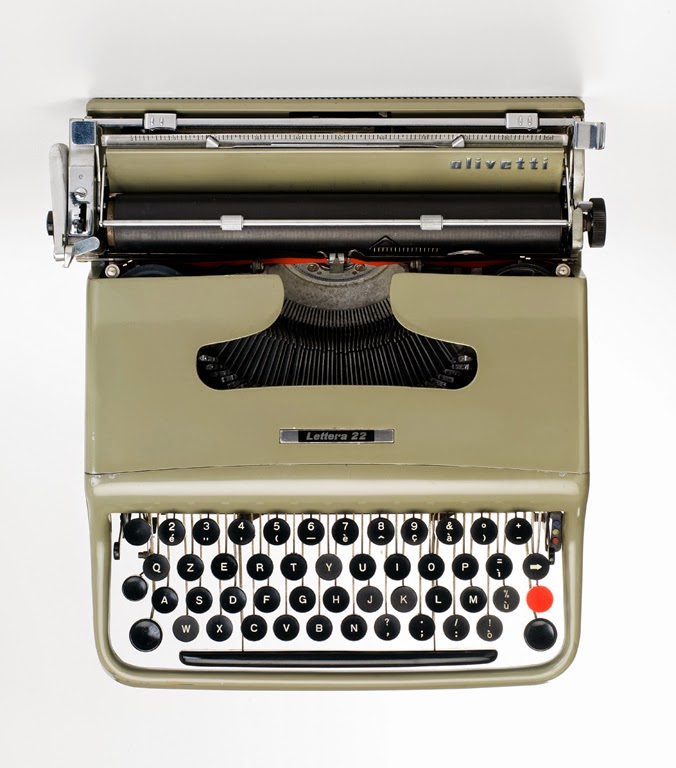 Esslinger is on the phone from Germany’s Black Forest, a passionate and exuberant advocate expounding his unique worldview. While many of his famous designs are now museum pieces, he looks resolutely to the future. Esslinger is talking in anticipation of the exhibition Interface: People, Machines, Design at Sydney’s Powerhouse Museum. It is a world of iconic products, of Olivetti electric typewriters, Braun radios and Apple computers, telling the story of how a handful of industrial visionaries transformed clunky machines, elevating the industry in the process. Other designers featured include Dieter Rams, the German industrial designer for Braun who was such a strong advocate for functional simplicity; Jobs and Steve Wozniak, co-founders of Apple; Doug Engelbart, a seminal figure in computer interface design; and Olivetti designers Marcello Nizzoli, Ettore Sottsass and Mario Bellini. 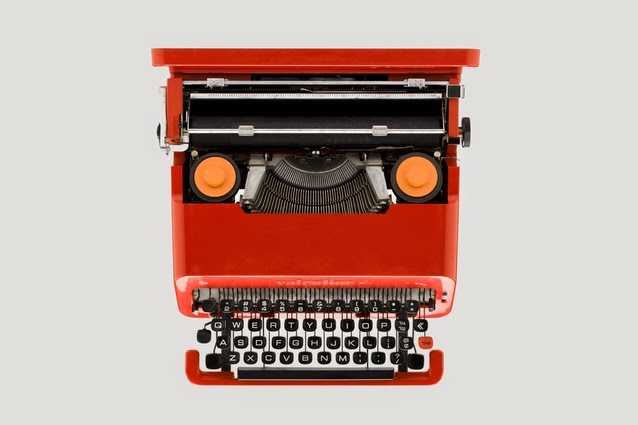 “There’s crazy stuff in there that I forgot existed — the old typewriters I like,” Esslinger says. 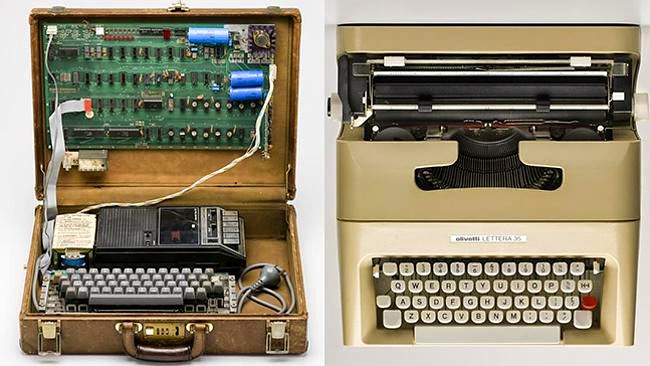 The exhibition contains a rare Apple I computer and the Xerox Alto computer that transformed Jobs’s vision of personal computing. When Jobs was shown the Xerox Alto, he immediately realised it was the future, even if Xerox didn’t. “It was the combustion engine of the information age, it accelerated it,” says Esslinger of the device. “How blind executives were not to recognise what they had in their hand.”
“The Mac, it was stolen from Xerox but we converted it into an experience that was not about the office — it was about writing poetry or whatever.” Indeed, an early Apple II advertisement featured the computer on a kitchen table, and Jobs was inspired to model the Apple II case on a Cuisinart electric mixer he saw while wandering through the kitchen appliance section of Macy’s department store. “It’s important to understand as a designer you have to create a platform and invite people into it and they discover stuff they never thought of before. That is the emotional stuff that design has to do,” Esslinger says. “Each innovation must have the magical gap that people can invent something for themselves. “Companies try and control more and more,” he says, “Apple tries to control.” The exhibition looks at the interface between people and technology, but also the relationship between art and design: Italian futurists, geometric abstraction and later pop art at Olivetti, functionalism and modernism at Braun, and the non-threatening kitchen appliance aesthetic that influenced the early Apple computers. 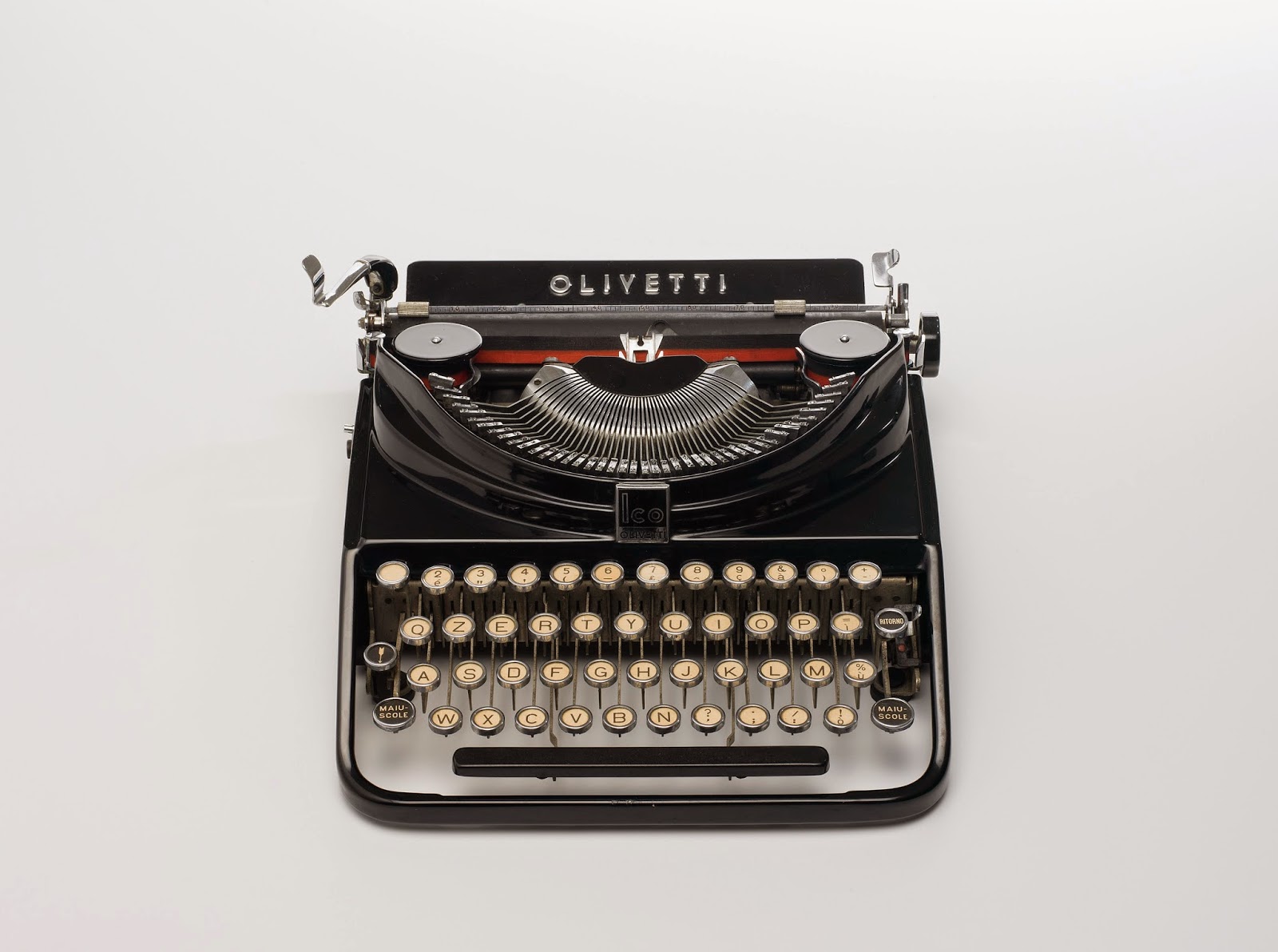 These men were the “masterminds”, according to the director of the Museum of Applied Arts and Sciences, Rose Hiscock. “We are delighted to explore the ideals behind these design masterminds of our generation, whose influence continues to be felt in everyday objects we all use intuitively today.”
The acceleration is such that a variant of the Macintosh I [the author] can remember tapping out school assignments on is now a museum exhibit. A first-generation Apple 2G iPhone from 2007 looks as out of date as an Apple II. 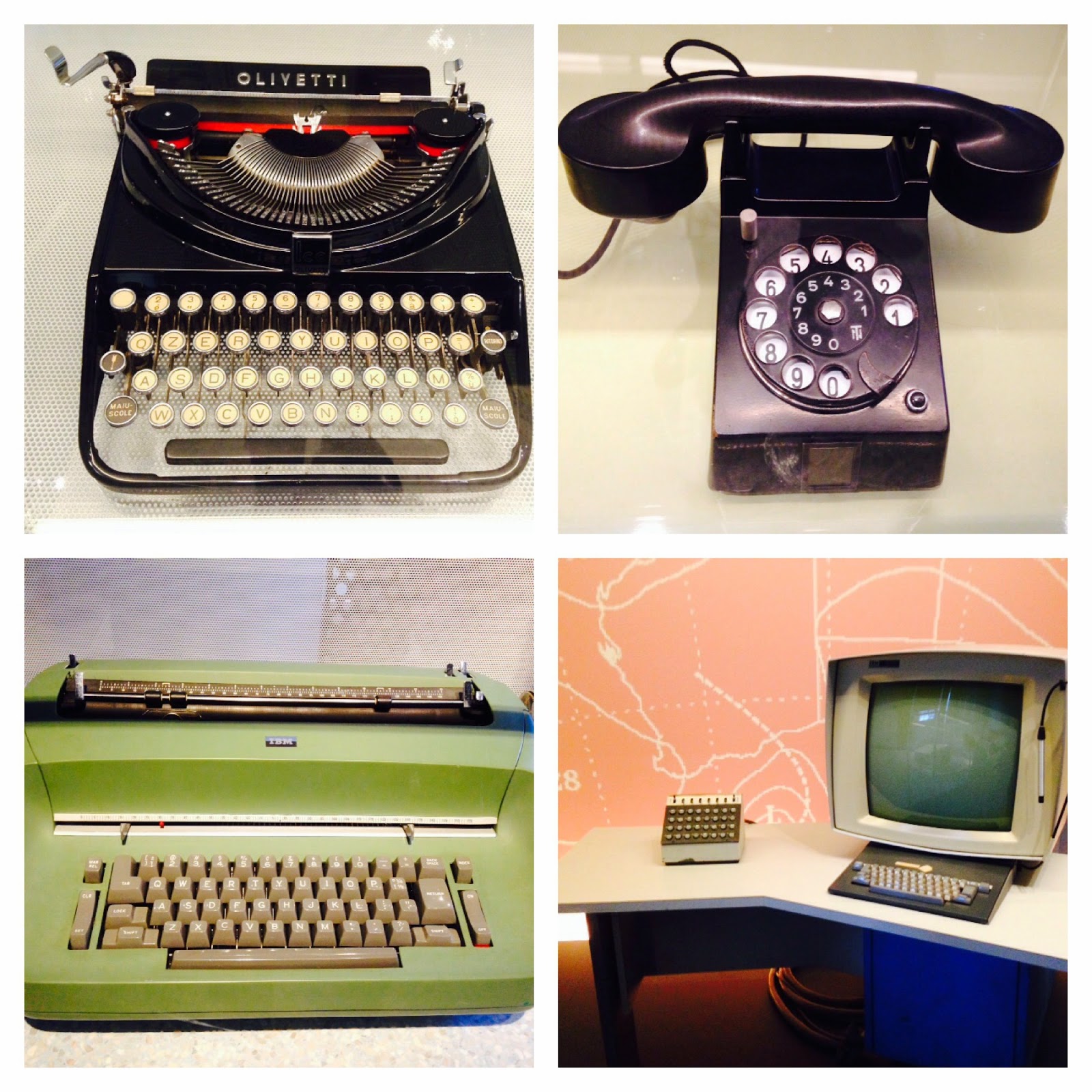 Kids attending this exhibition may need a briefing from their parents on what was the point of a typewriter.
Esslinger sees a slow disconnect between consumers and machines. Something is missing. “Products are a bit too generic — they can get copied and copied and copied. Like a pebble in the river, but you have to find a nice ­pebble. They become less transparent. You don’t know what’s in an iPhone but you know exactly what it does. This is what we are missing today, what it is exactly doing. Walking in the city, you see windows and doors and buildings and you know where you are. With so many apps today, you don’t know where you are, there’s a lack of identification and a lack of belonging. We are really in a transition phase to find ways to connect people with products.” 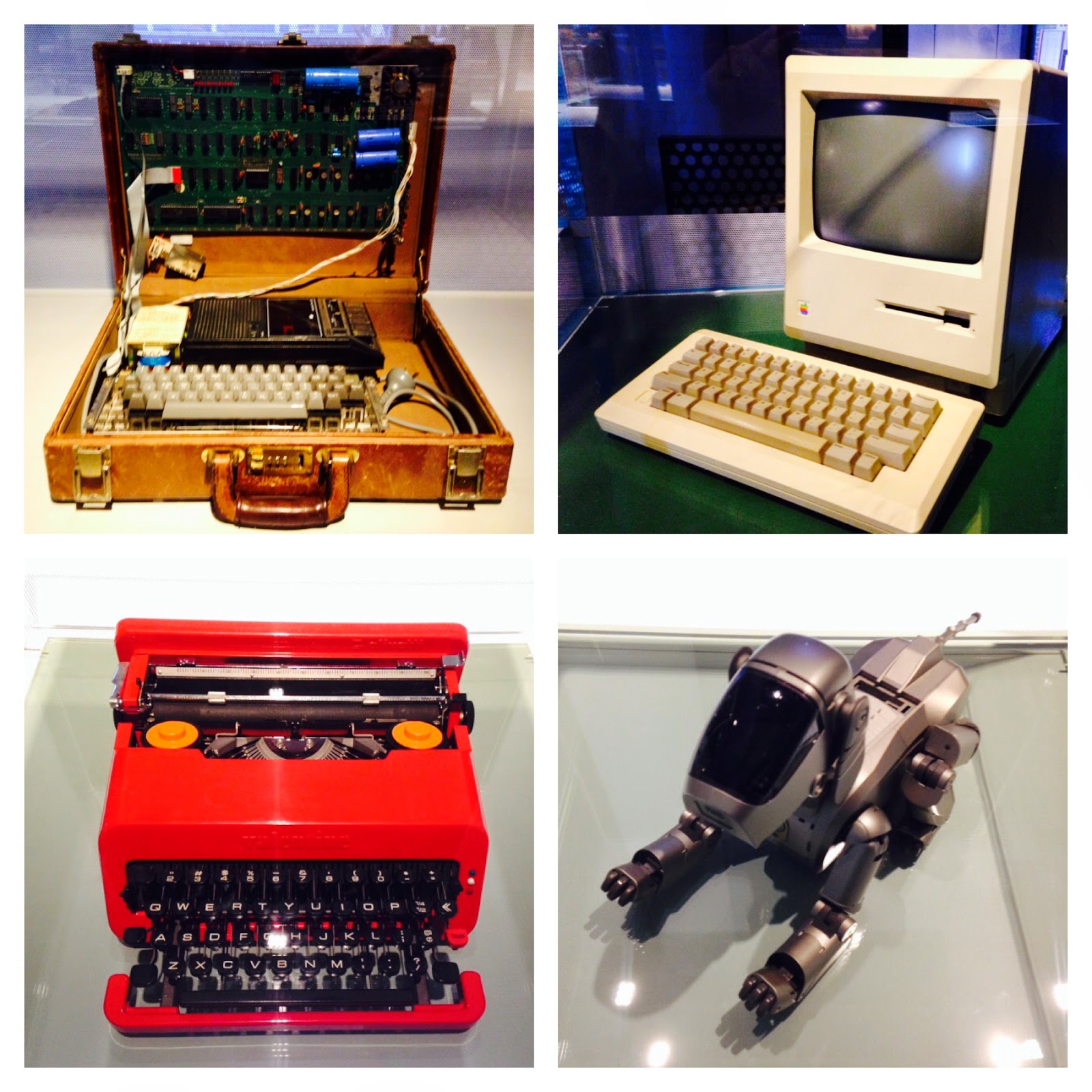 So when purchasing he encourages consumers to “think twice”. “Follow your feelings when you buy a product, let it talk to you. This connection must be thought about.” As to the future, he is firm. It will be about robotics. “With robots you can do so much more than just electronic devices. That’s why Google invests so much in that area.” He leaves us with a final plea. “One thing I am really adamant about: encourage young people to use their talent and live a creative life and don’t turn into a conservative coward. “There are so many creative people in the world but most of them don’t make it. Encourage people and also be yourself.”

Posted by Robert Messenger at 08:42

True beauty. I especially like the first picture with the three machines juxta- respectively superposed. Wish I could see the show, but it already gives me good Inspiration for some photos of my own sleeping beauties.

He's spot on. Have you seen that cheesy Ford ad? We keep churning out stuff that has no real innovation, just more cheap thrills and gadgets. That's especially true of smart phones. We don't push the envelope anymore.

That black Olivetti looks like a 1920s design. Had no idea they were making them back then!