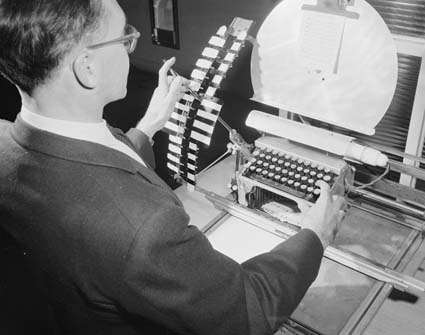 Perhaps there was another Australian typewriter inventor, after all – John Murray Parker, of Glen Huntly, Melbourne.
At least as late as 1960, Murray Parker, a producer with the Australian Broadcasting Commission, was still working on his “music printing or typewriting machine”. 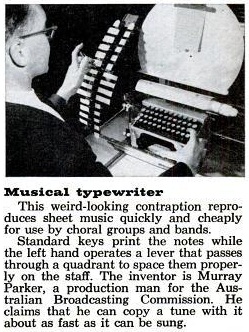 It got some publicity (along with in-flight movies and jet boats [developed in New Zealand] in Popular Science in its issue of April 1961. 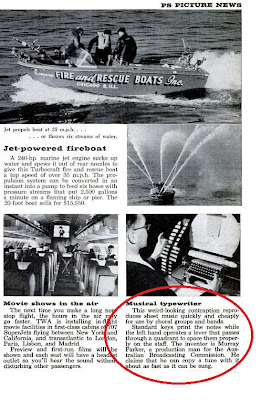 Parker had first applied for a patent for it in the US in 1946, after having had it patented in Australia the previous year. 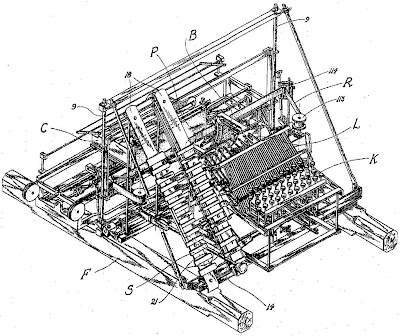 Parker patented improvements to his machine in Australia in 1948 and applied for a patent for these in the US in 1949. The patents were issued in 1950 and 1952. 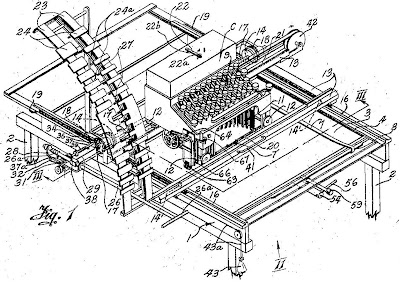 Eight years on, Parker was able to demonstrate his “music copying machine” which he and a partner, Graeme Bentley, had further developed into a working prototype. 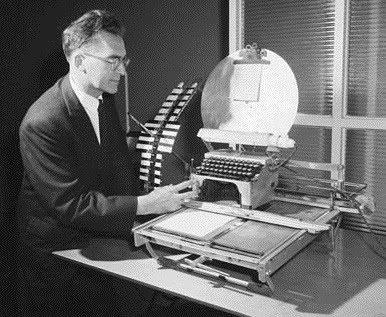 They claimed that in one operation, their machine could reprint the words of a song with any arrangement of music, and even produce a four stave choral work.
It could also type stencils and make carbon copies and wrong notes could be erased as with an ordinary typewriter. 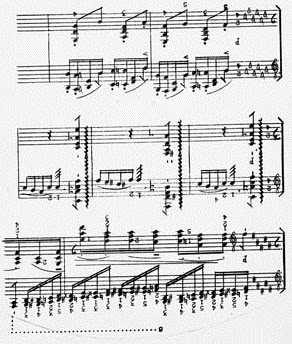 The typewriter had a flat platen in a sloping horizontal position, on which paper or stencil was held while the keys moved over the platen.
In his specifications, Parker said music could “be printed or typewritten in a most accurate and legible manner and with the utmost speed and convenience.
“Hitherto, where a relatively small number of copies is required, music script has generally been copied by hand or, perhaps, reproduced by photographic process. In any event, the production of copies in such manner is relatively lengthy, tedious and costly while the copies often suffer partial illegibility.
“In cases where a relatively large number of copies is required, a master or original is frequently prepared by hand, whereupon a photolithographic plate is produced from the original, although in some cases the master or original script is initially engraved upon a copper or pewter plate by hand. In other cases, a special ‘music type’ is set up and utilised for printing the copies. All of these methods and procedures have been found to be unsatisfactory for one reason or another. Generally speaking, they are difficult, tedious and expensive to follow and the reproduced copies are often found to be faulty and lacking in clarity.
“I am aware that various attempts have hitherto been made to devise a music printing or typewriting machine, but to the best of my knowledge none of such prior proposals have been found to be practicable or capable of yielding satisfactory results due to their being too slow in operation, excessively difficult, or inconvenient to manipulate and imposing considerable strain upon the vision of the operator.
“The present invention, which is the result of years of study, research and experiments, provides a machine which I believe to be satisfactory from every point of view and from which I have obtained surprisingly good results in experiments.”

Very interesting. I see the invention uses an Elliott-Fisher bookwriting typewriter, which seems like a good idea (the Keaton music typewriter also types down onto a flat surface). But were Elliott-Fishers still even being made this late?

The upcoming March ETCetera will feature another remarkable music typewriter.

Hi Richard. Thanks for pointing that out. On a further look at the second patent, it does say, "The carriage, keyboard and linkage mechanism may be of any well known commercial typewriter construction; the carriage illustrated being an Elliott Fisher apparatus."

I note you linked to a Wanderer from my post on the Corona music writer. Is that the one featuring in ETCetera by any chance?

I can't believe this invention would work with anything except an Elliott Fisher!

Yes, I tend to agree about the Elliott-Fisher. Parker would appear to have been using the same machine 1946-1960, perhaps just the one model that he had acquired.

By the way, not for a moment do I believe that he could "copy a tune with it about as fast as it could be sung."