I am grateful to Typospherians Richard Polt and Rino Breebaart for alerting me to this interesting video about Australian writer Gerald Murnane, part of "The Writer's Room" series made in 2010 for ABC TV's First Tuesday Book Club.
I was delighted to see Murnane has an even more peculiar two-fingered typing style that I do. Well, he calls it "one-or-two-fingered", but I'd say it's more "one-fingered". Also, I have no idea how he could manage to write three novels with his typewriter balanced on an ironing board.
Sadly, I cannot claim to be anywhere near as well organised or as practical as Murnane is. But I was strangely uplifted by the sight of Murnane using what looks to me like a Nakajima ALL portable typewriter. His "regular" typewriter of choice is a mid-60s Remington Monarch. He also has an Adler standard. 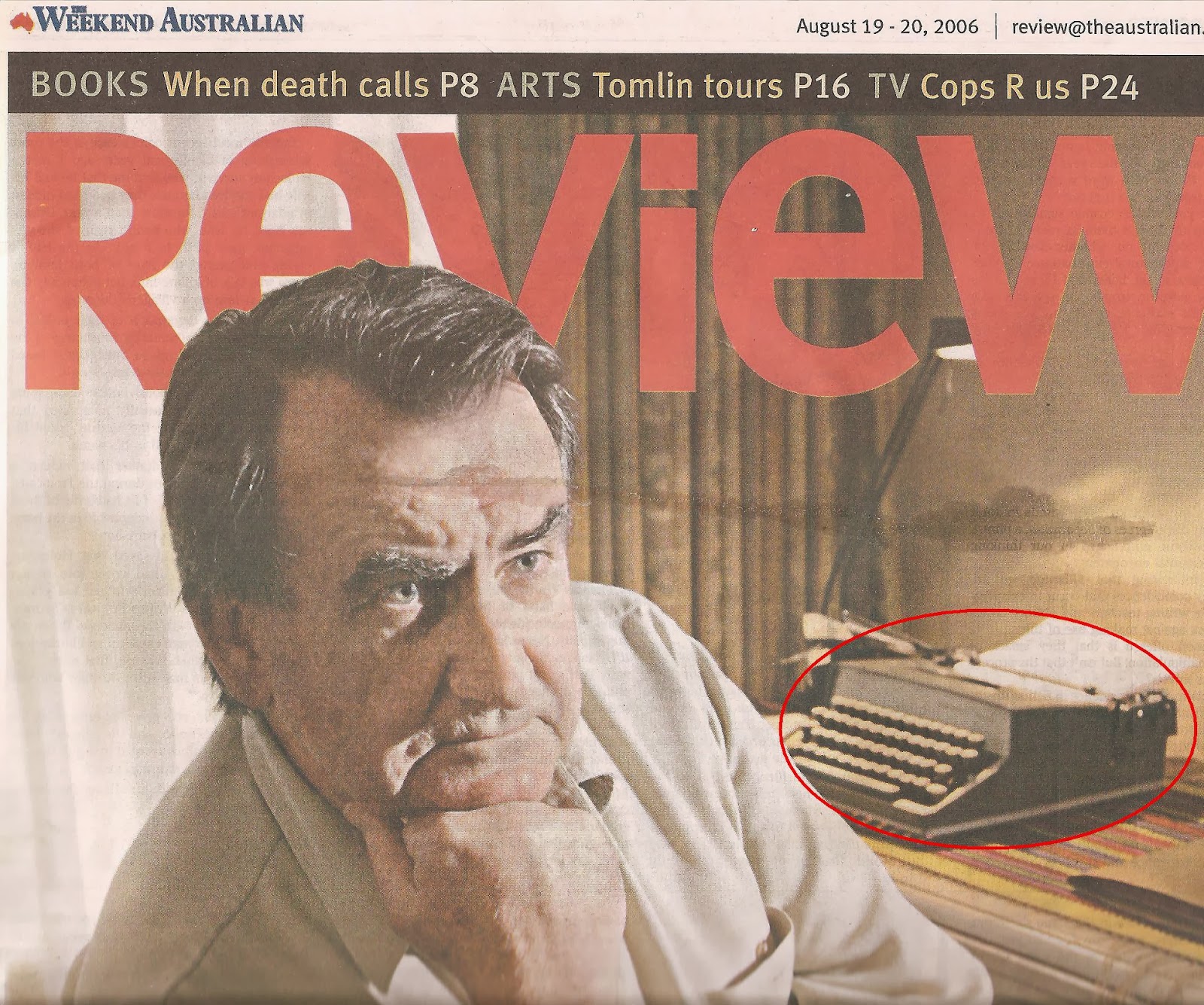 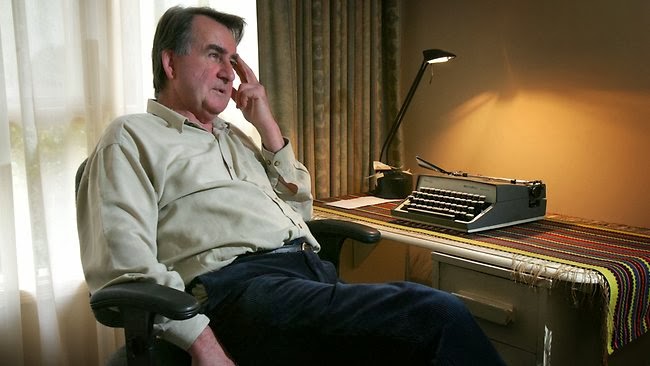 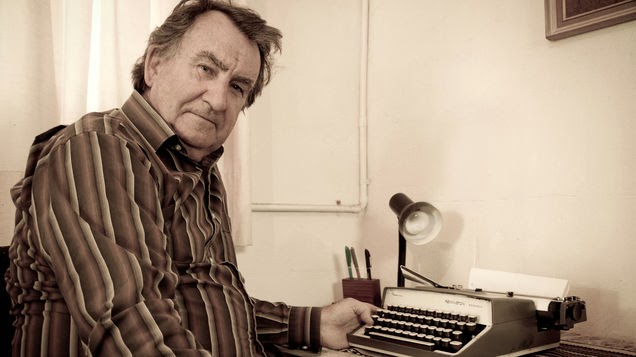 Gerald Murnane turns 75 next week. He was born on February 25, 1939, in Coburg, Melbourne. Murnane's first two books, Tamarisk Row (1974) and A Lifetime on Clouds (1976) were semi-autobiographical accounts of his childhood and adolescence. Both are composed largely of very long but grammatical sentences. In 1982, he attained his mature style with The Plains, a short novel about a young filmmaker. The novel was followed by Landscape With Landscape (1985), Inland (1988), Velvet Waters (1990) and Emerald Blue (1995). A book of essays, Invisible Yet Enduring Lilacs, appeared in 2005, and a new work of fiction, Barley Patch, was released in 2009. He won the Patrick White Award in 1999.
Australian writers Les Murray, David Malouf (Robotron Erika) and Morris Lurie (Hermes) also all still use manual portable typewriters. 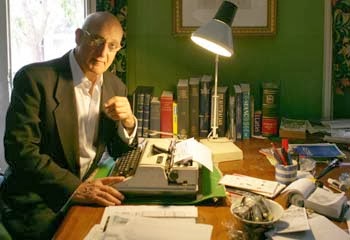 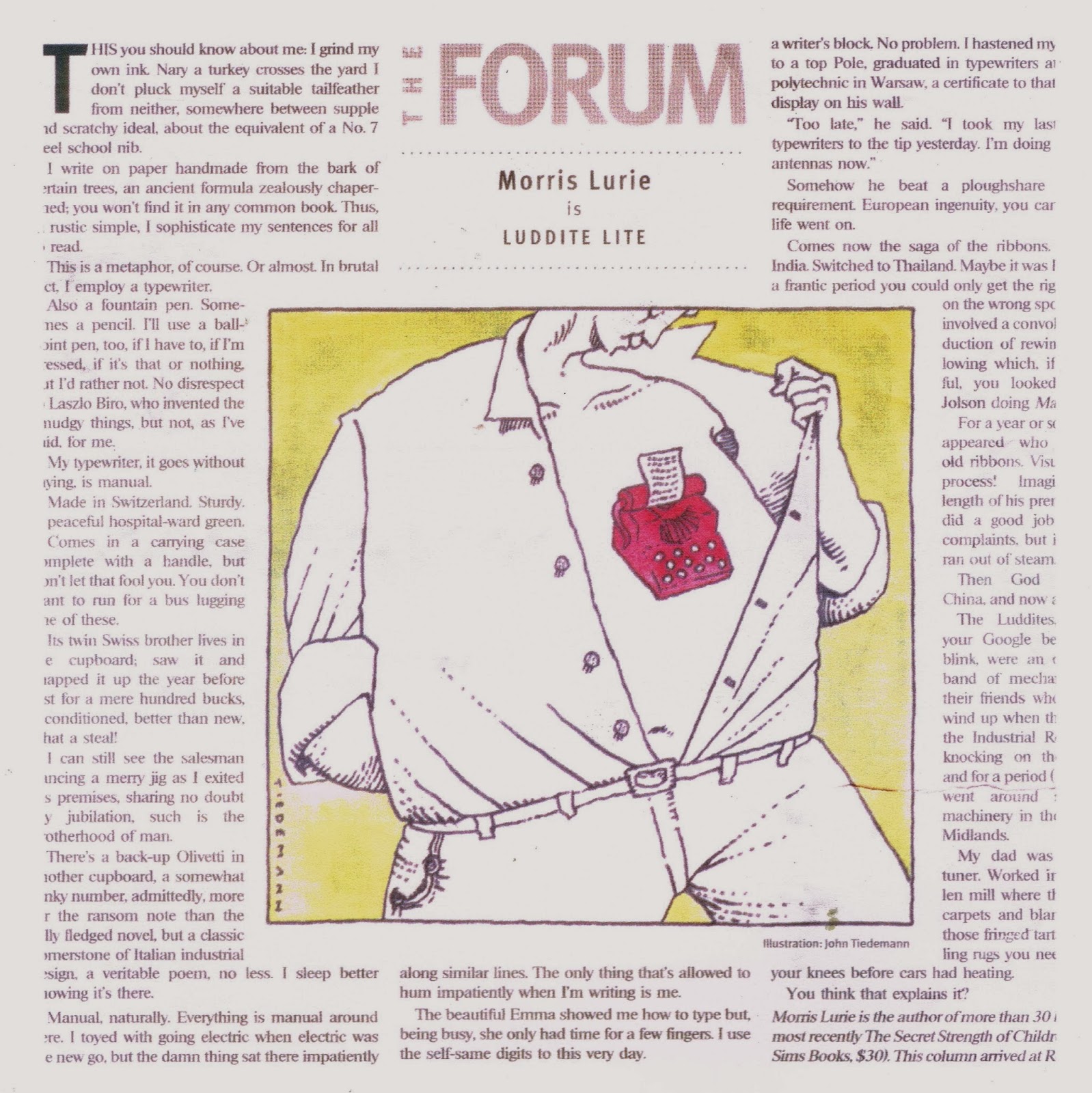 Posted by Robert Messenger at 18:05

If only I could be as organized as he.

Gerald Murnane is one fascinating bloke, and like Bill M I envy his organisation.

I wrote an essay on The Plains a while ago, which can be read here: http://jasperlindell.blogspot.de/2013/04/gerald-murnane-plains-and-australian.html

There's a lot of interest in Murnane recently. Check out this, the contents of those filing cabinets in the video: