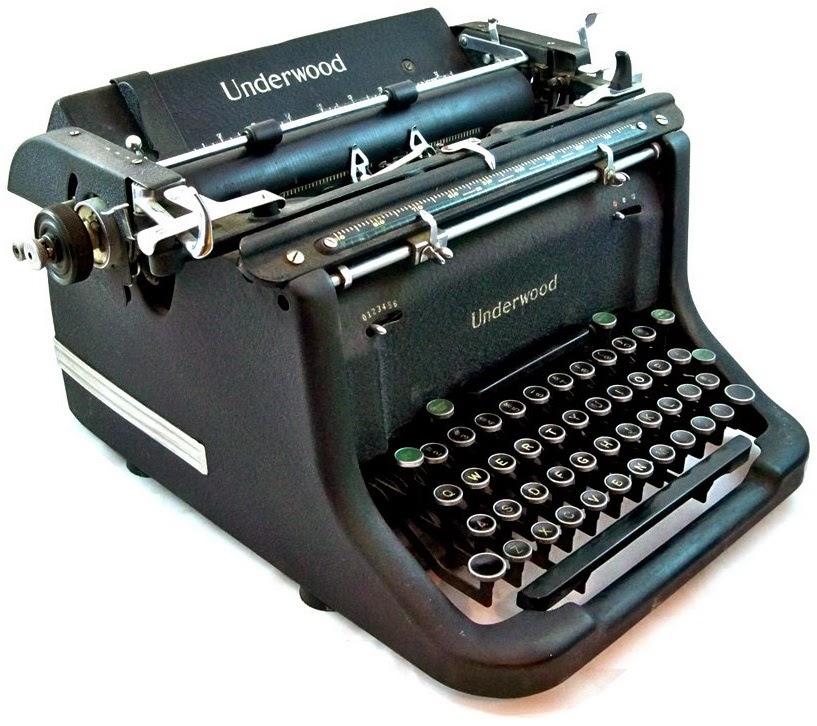 Image from Leaping Lemming of Coeur d'Alene, Idaho
In a comment on my post about the Underwood Master Model, Donald Lampert asked if I knew who designed it. At the time I didn't and, with apologies to Donald, I should have checked that out before posting. But I would have guessed Willie Dobson, and as it turns out I would have guessed right. 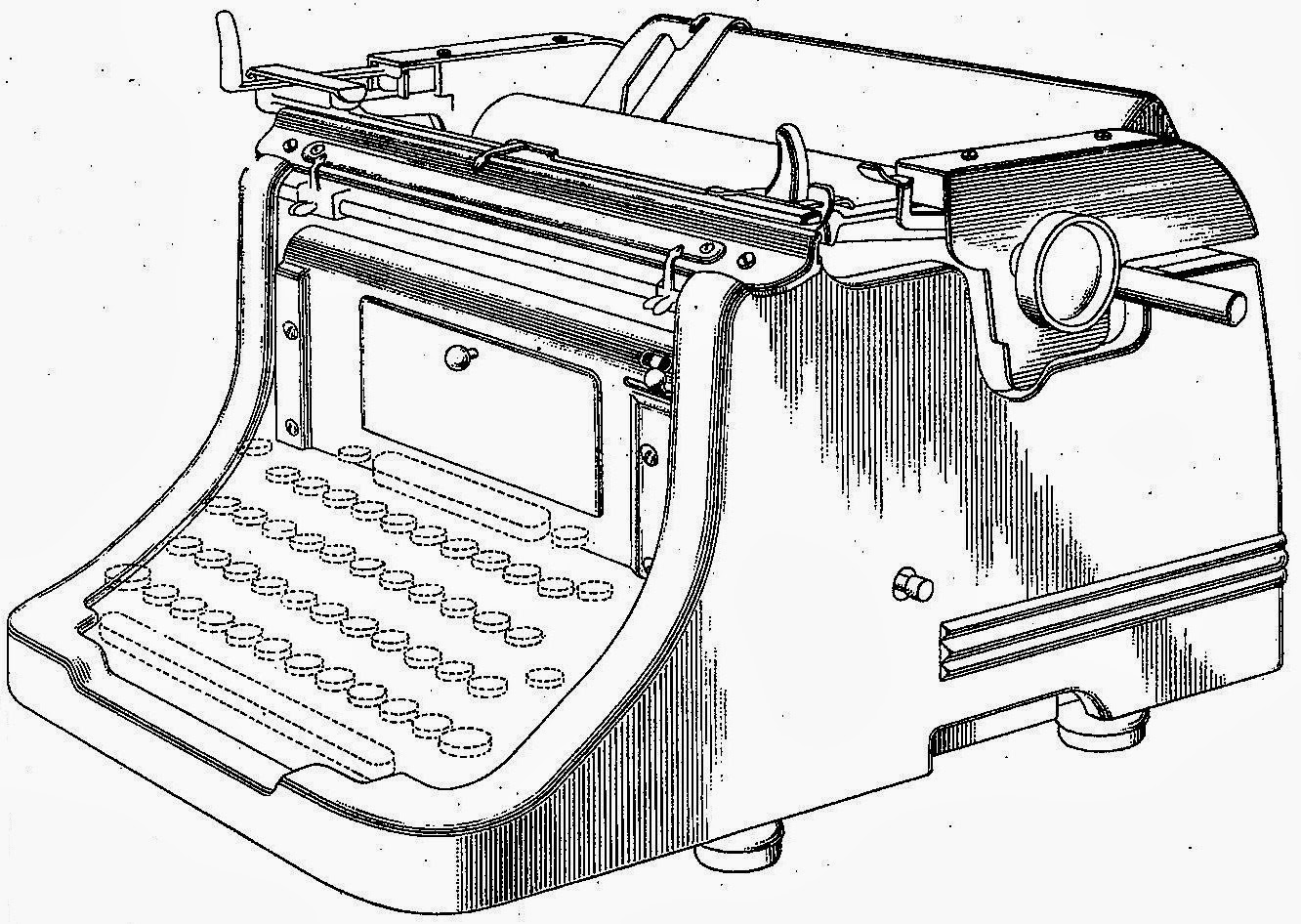 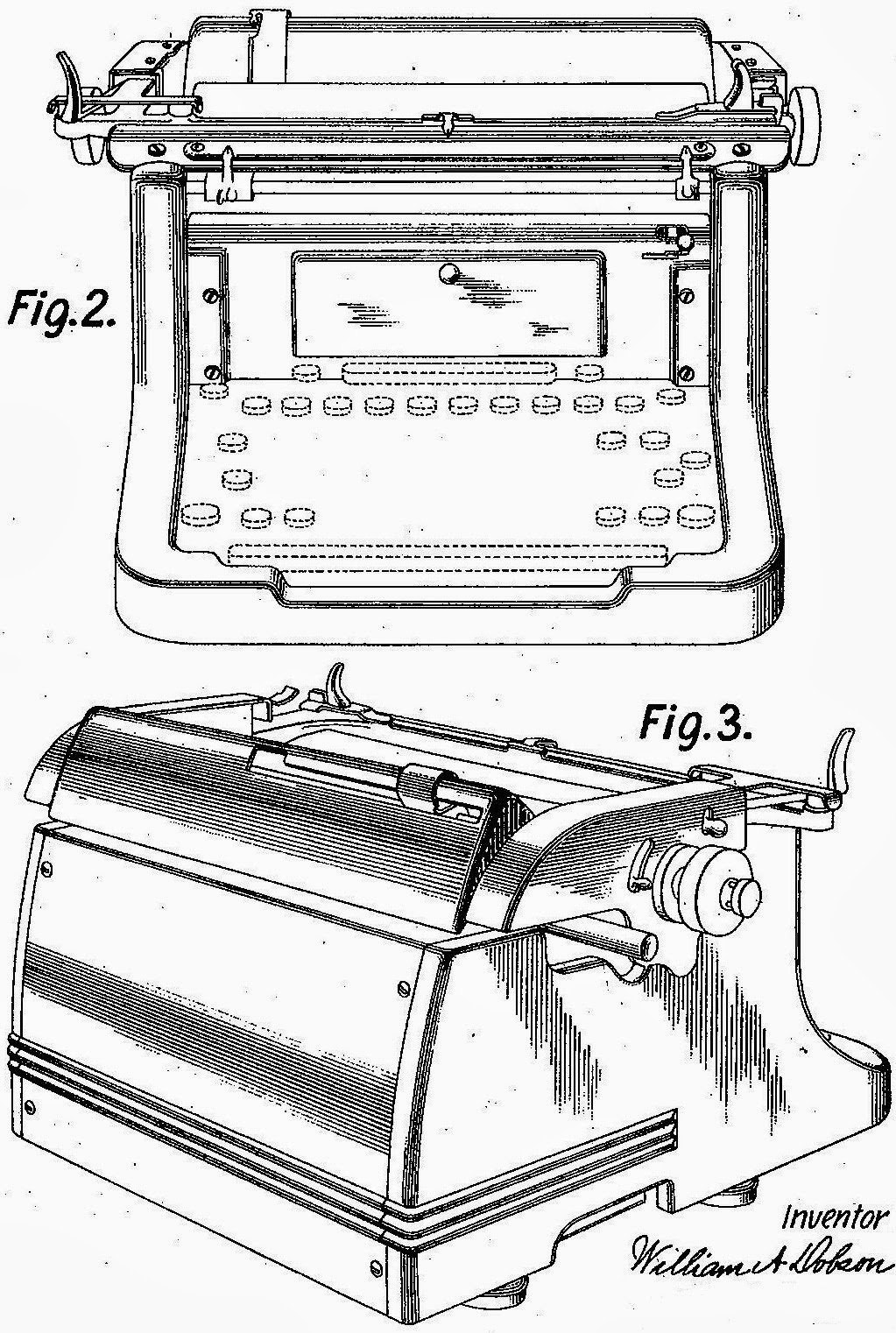 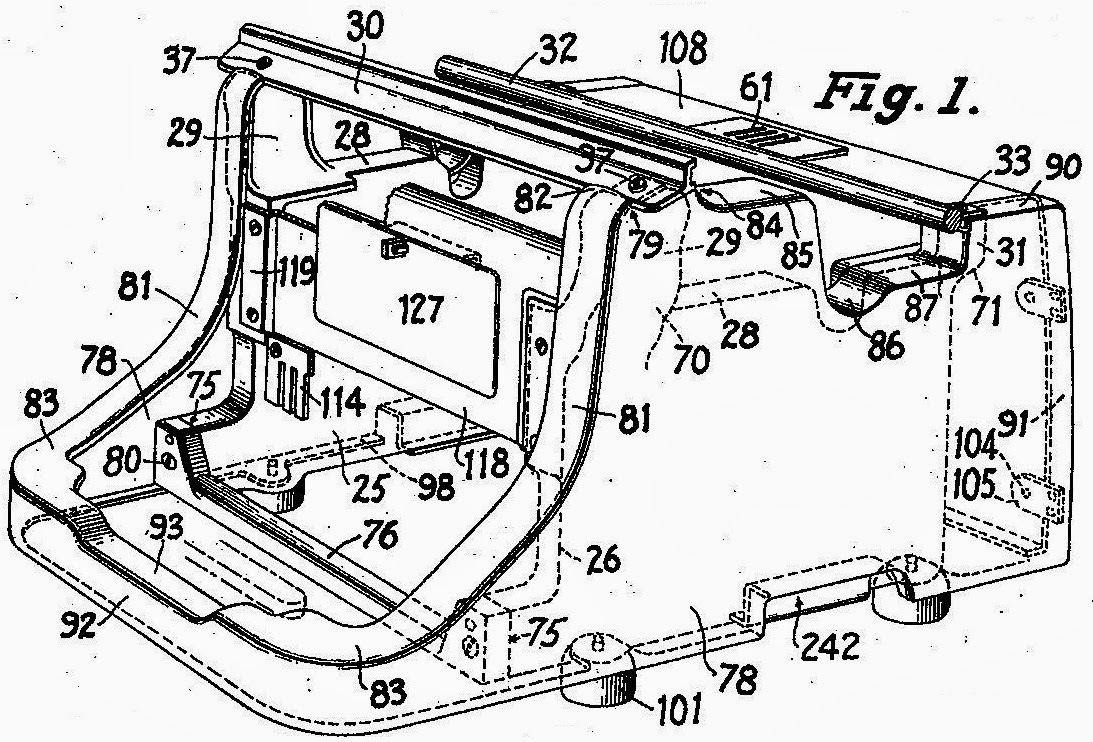 Dobson continued to work on the Master in January 1938 (above and below). 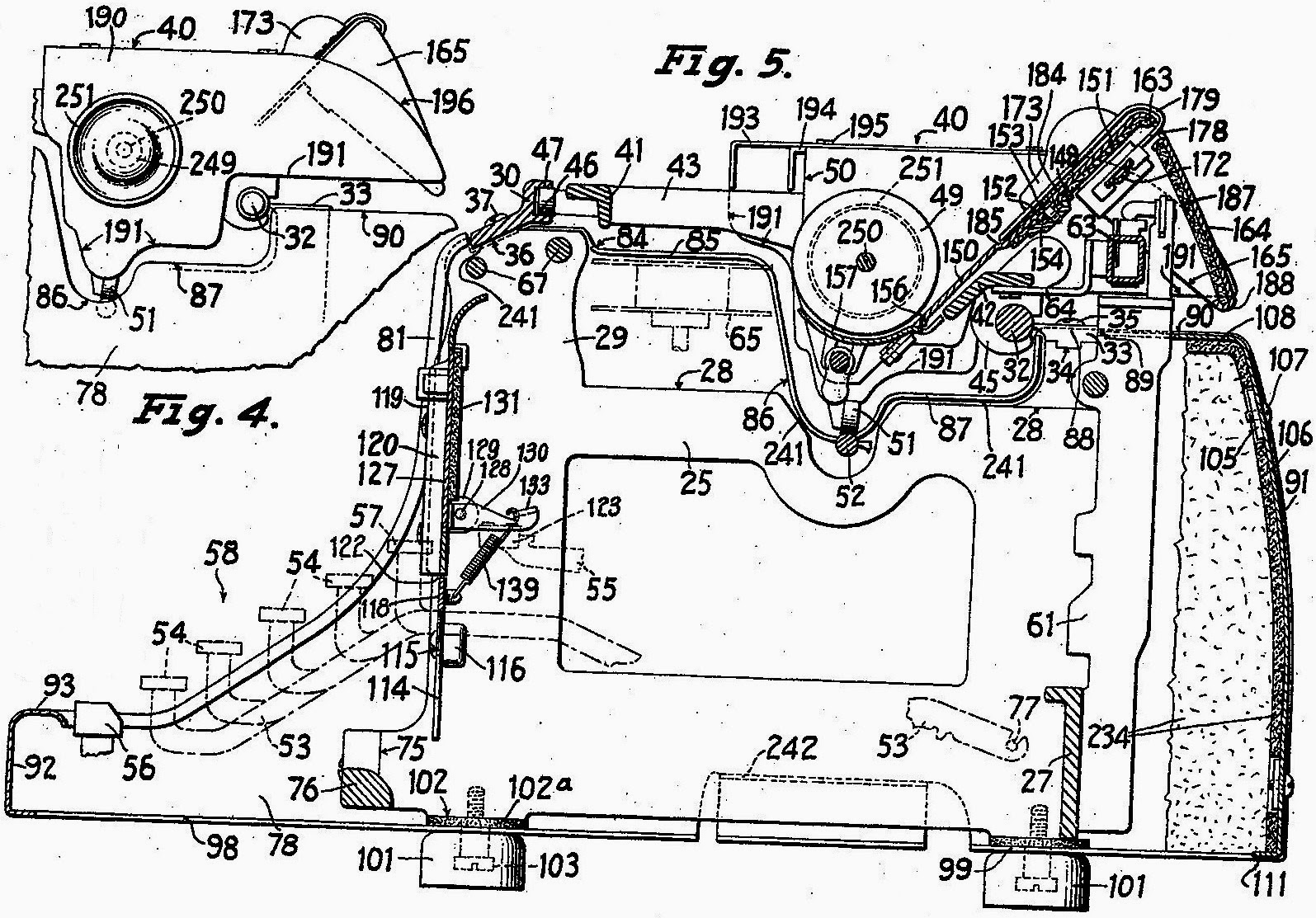 But the basic inner frame for the Underwood standard, used on the Master, was designed in March 1919 by another great Underwood design engineer, Prussian-born William Ferdinand Helmond (August 1871-). 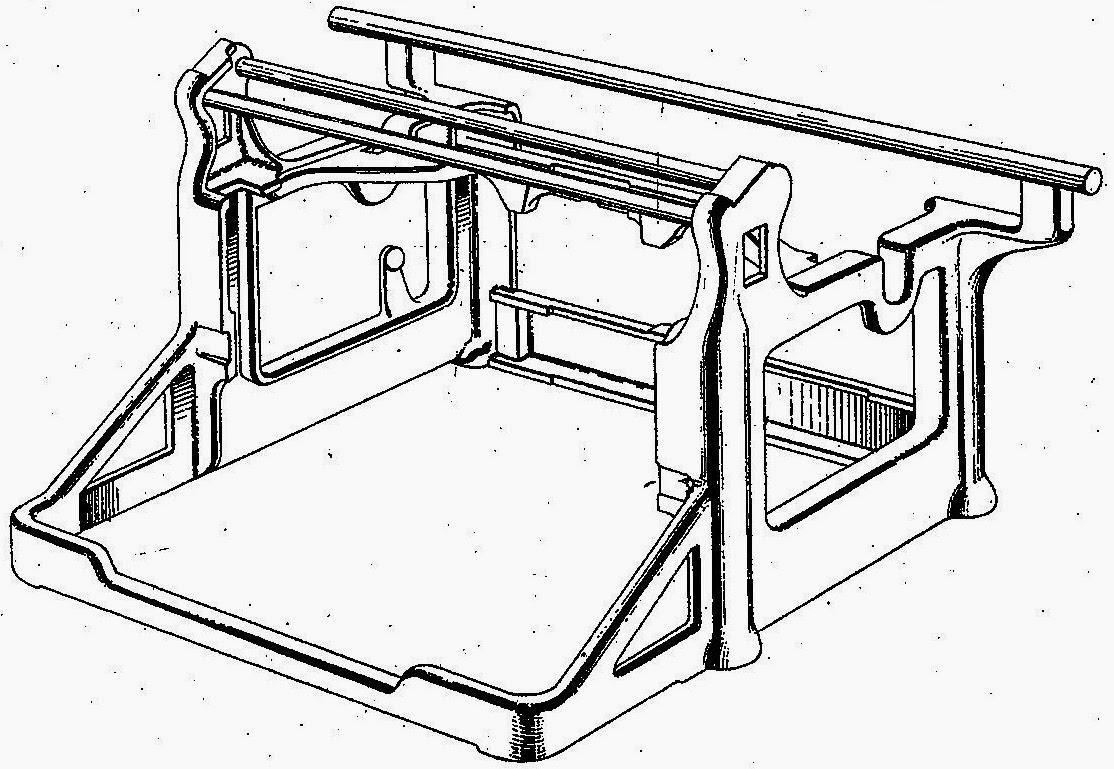 From November 1929 to the end of 1934, Underwood Noiseless standards were made by Remington, but in May 1933 Helmond began to design Underwood's own Noiseless model, which was made until 1946 (the Noiseless portable came from George Gould Going at Remington). 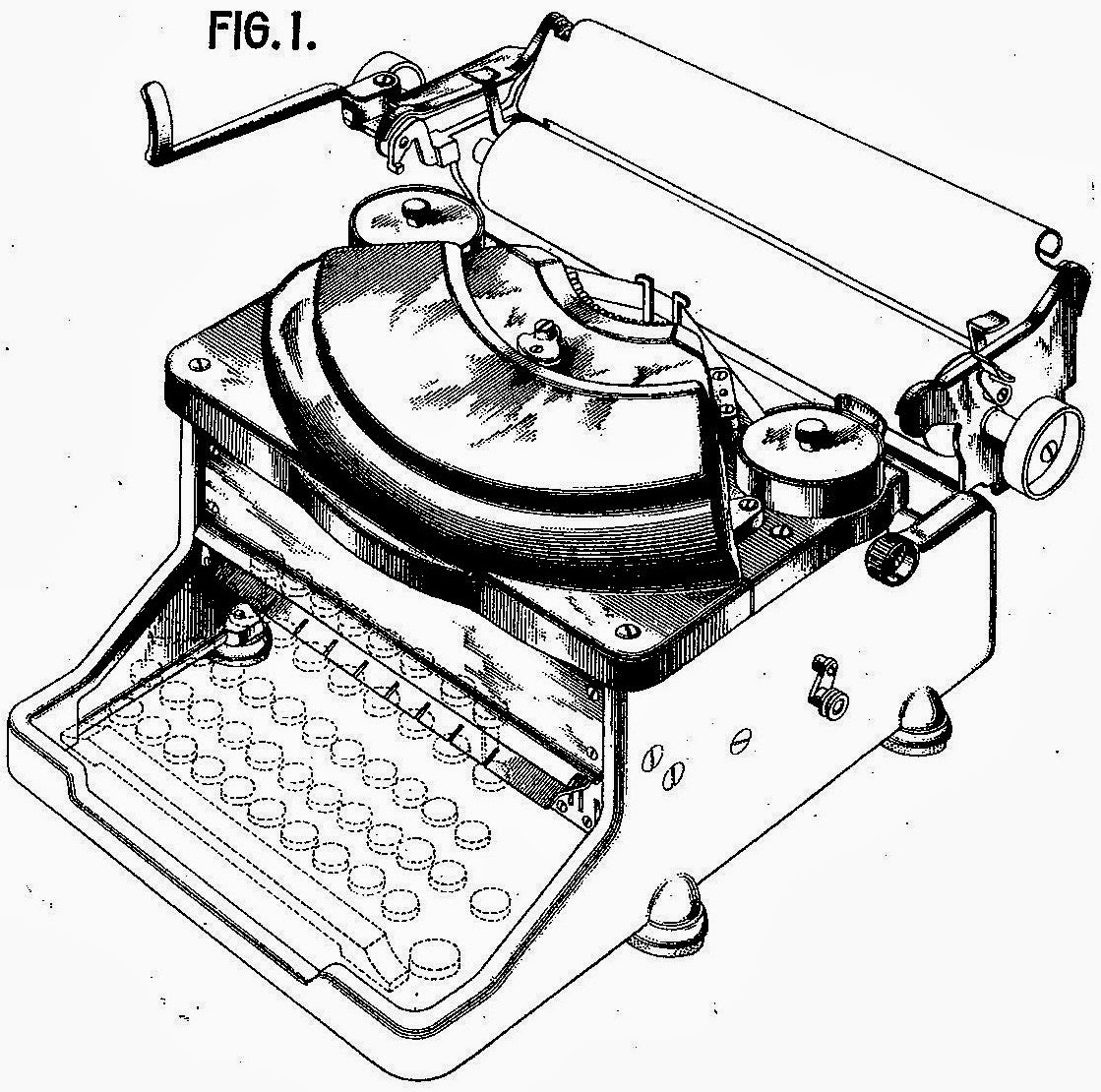 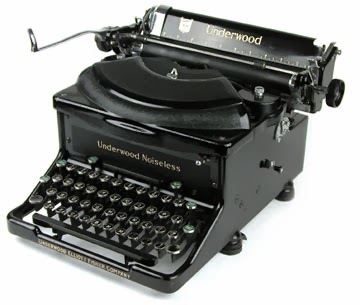 A Remington-made Underwood Noiseless: Image from myTypewriter.com
The mechanics of the Underwood-made Noiseless were designed by Dobson in December 1934, just before production at Hartford, Connecticut, began: 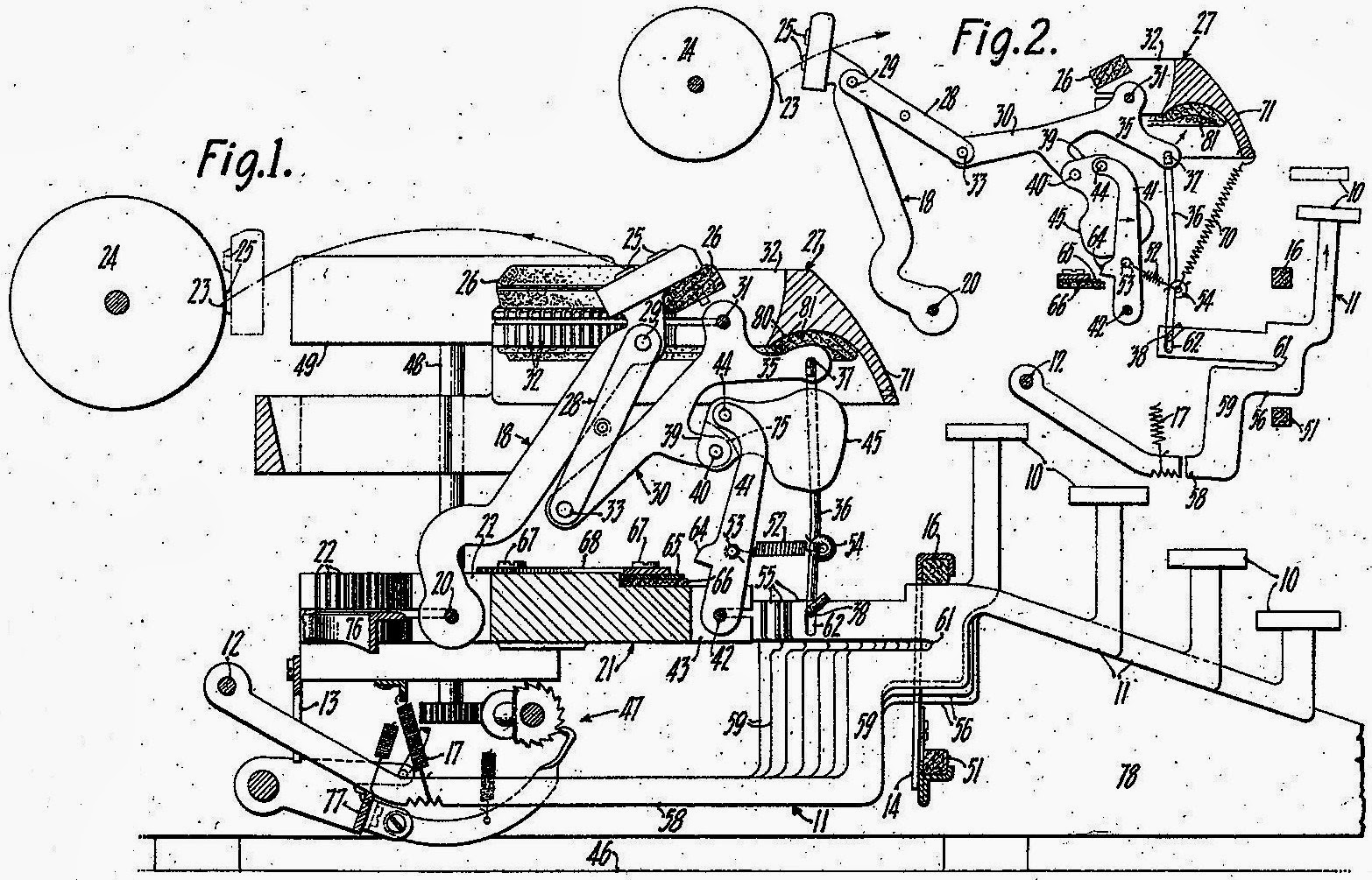 Dobson is possibly best known (at least by me) as the designer of the Underwood Universal-Champion portable, starting in March 1936, but this model was just one of many typewriters he designed for Underwood. Others include the gorgeous version of the earlier four-bank portable, with the indented front sections (March 1931). Bear in mind that Dobson did not just design masks for Underwood, but all the mechanics as well 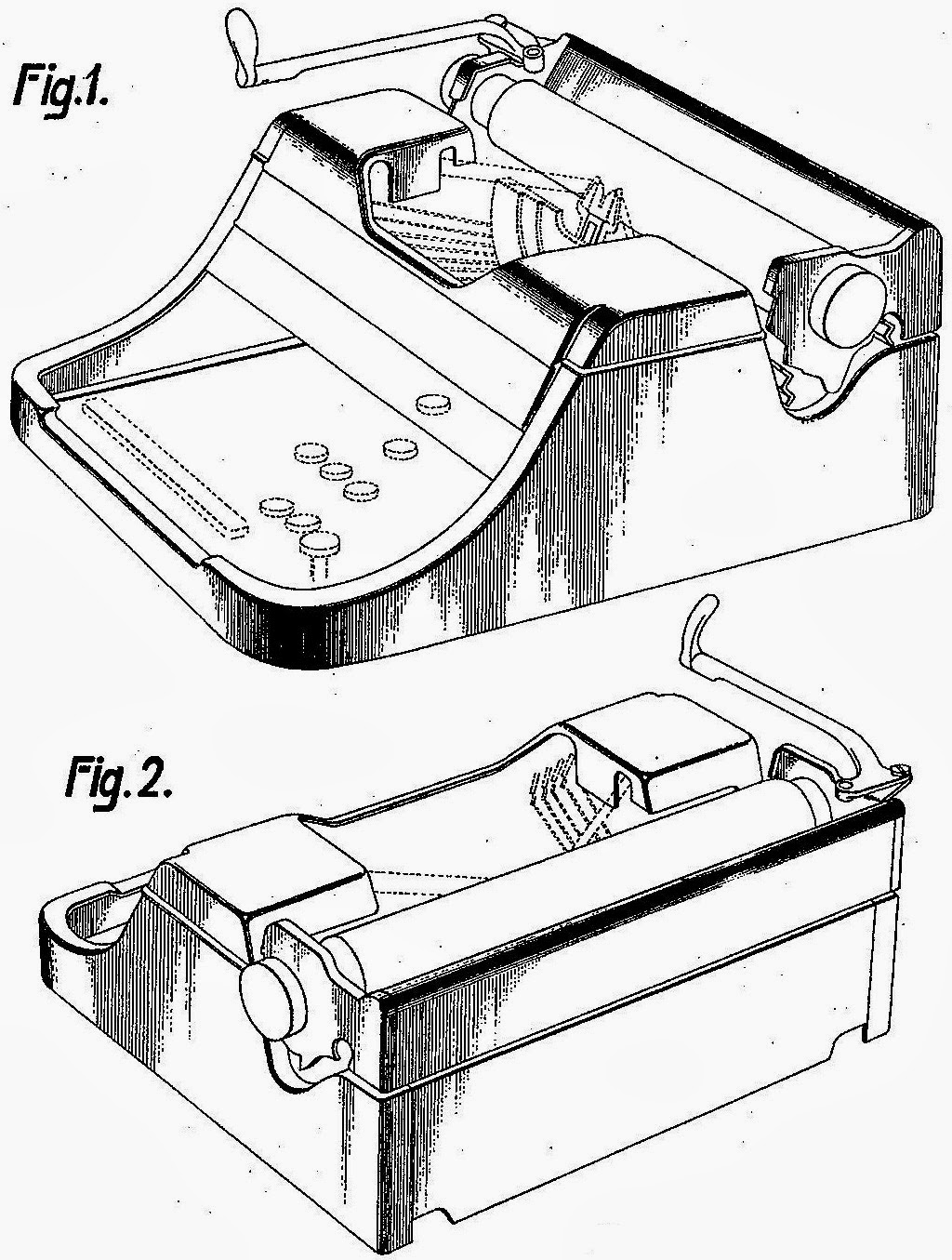 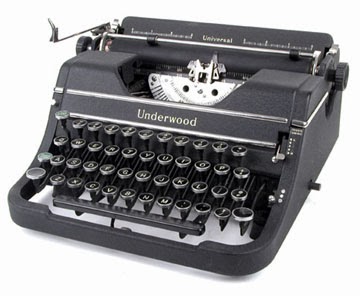 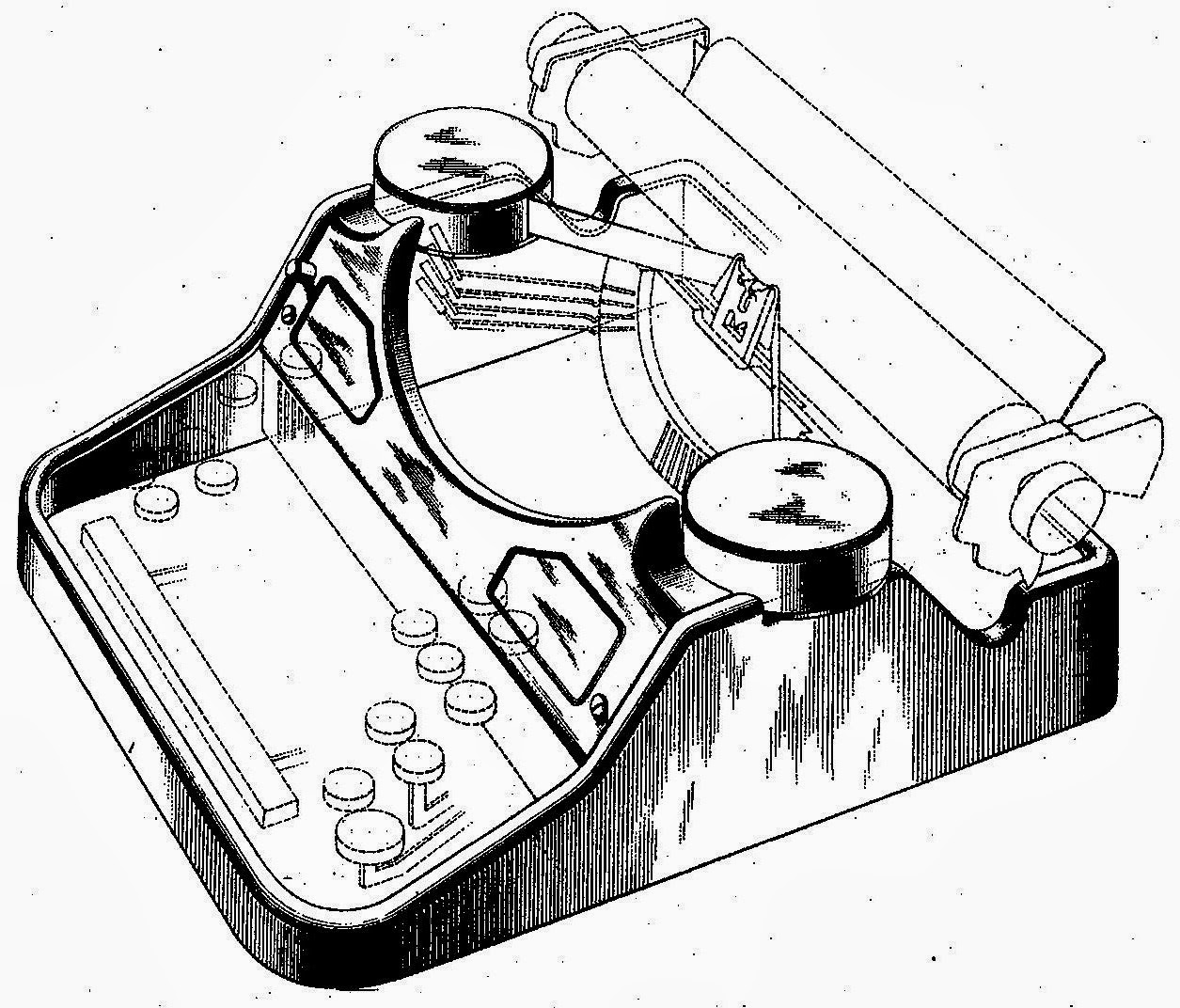 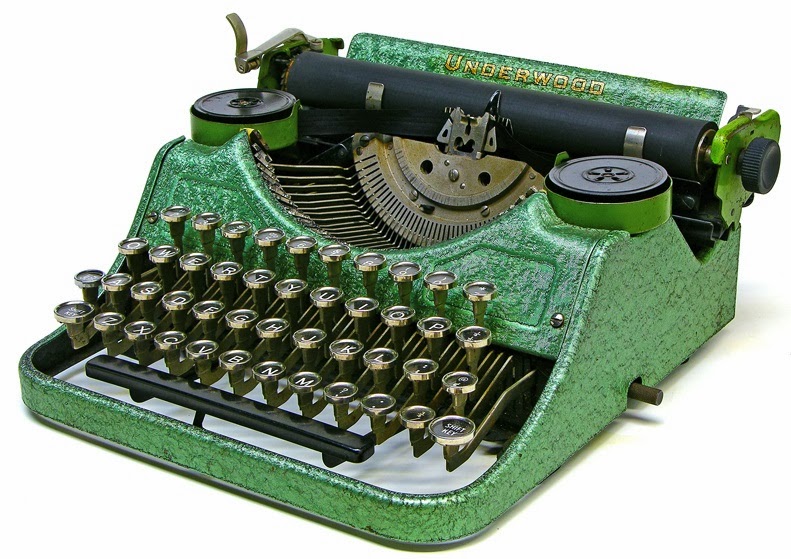 Alan Seaver Collection
William Albert Dobson was born in Tolland, Connecticut, in November 1870. He started working in Hartford as a toolmaker, then as an automobile engineer. Dobson went to work for Underwood as a toolmaker after World War I and rose through the ranks to become Underwood's factory superintendent in the late 1920s. In his later days he remained with the company as a typewriter engineer. He died in 1958 and is buried at the Walnut Grove Cemetery Meriden, New Haven, Connecticut. 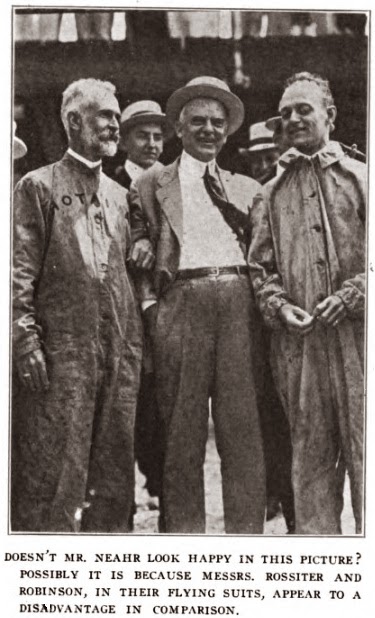 "Jake" Neahr (centre)
Getting off the subject of typewriters themselves, I just love this stand designed in 1921 by Jacob Eugene Neahr (1862-1935), Underwood's long-serving general sales manager, for the Underwood 3 portable. Has anyone ever seen one?

How do you do it, Robert? Your research and sources are second to none. Thanks, and best wishes from a silent reader.

Never seen or heard of one! (the portable stand) I wonder if it was actually produced? I'll check my old magazines from the 20's to see if it's in an ad!?
Thanks for the info on Dobson, and the Master.
I live in the house of a Dobson family, - they owned and ran the blacksmith shop in the day that evolved into the Kaiser/Fraser/Jeep dealer in the 40's - 60's era, in my town.

Eye opening ... so the later Underwood Noiseless are mechanically different from the Remington Noiseless! Who knew? You, apparently.

Thank you Travelling Type, Donald and Richard for your kind remarks.
Richard, the Underwood designs for the Noiseless would also appear to suggest a slightly different front section, with a rounded lip, but I can find no evidence of this in images. So I am wondering whether, perhaps for reasons such as added production costs, these changes were ever made. The full extent of the arrangement between Remington and Underwood would be fascinating to find. I always believed James Rand wanted to offset Remington's own production costs by sharing the original designs, as it is quite apparent his heart was never fully in the Noiseless project. When Rand took over, he was critical of the length of the development period and mounting costs, and then patented a means of turning it back into a "noisy" typewriter, claiming to be responding to public demand. I'd love to know the full story in all this.

I always thought Remington made all the Underwood Noiseless typewriters. I'd like to get an Underwood made one to see the differences. You are the only person I know who could find that information. Good work!

I am always amazed at the similar appearance of different models of Underwood. I wonder did they only change the name in hopes of boosting sales?

I wish I could post a pic of the Underwood my daughter and I picked up off a curb left for garbage pick. I found your blog trying to figure out how old our newly found one is. It looks exactly like the one in the very top picture. I haven’t scoped it out thoroughly to look for numbers or manufacturing information yet. I gave it to my 20 year old son who has an appreciation for these old antiques. He loves it and wants to try and get it typing againwe already know it needs a new ribbon. Some major cleaning and TLC.