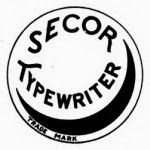 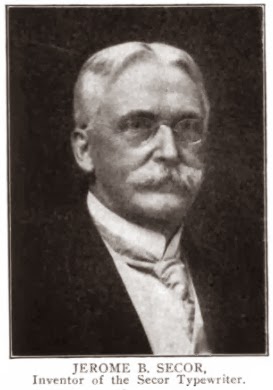 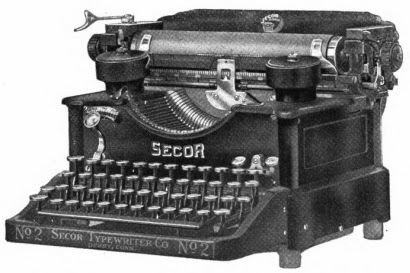 The second model Secor of 1911 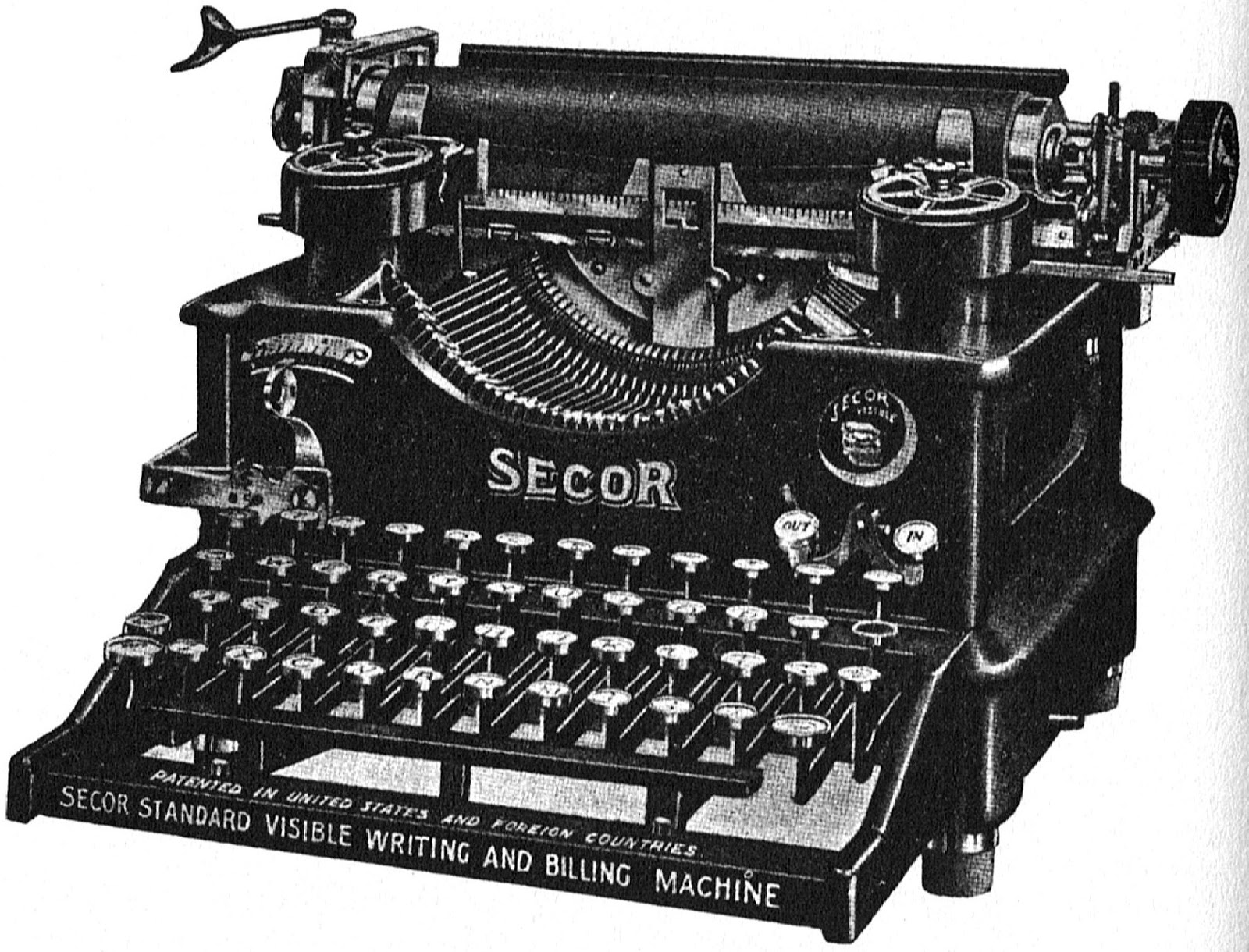 The first model of 1906: an unmitigated disaster
When Jerome Burgess Secor (1839-1923) set out to revive the fortunes of his typewriter in Derby, Connecticut, in 1910, he had to overturn a four-year history of what he all too readily conceded was:
. A bad typewriter
. Very poor marketing
. Reactionary ownership and management
. Tardy industrial relations, the legacy of a toolmakers' strike in October 1907 over Secor's arbitrary return to a 10-hour day from a nine-hour summer agreement.
It is highly indicative of the low esteem in which Secor was held in the typewriter business in 1910 that Typewriter Topics felt obliged to run this adjoiner sentence to an item about a Yost factory foreman leaving his job to join Secor:

It was certainly some challenge ... but Secor was known to be one of America's ablest engineers. Once he had turned that engineering expertise to vastly improving his typewriter, he then had to develop more assertive business acumen. And he was to prove more than willing to lop heads to get what he wanted. One of them belonged to his original choice as general sales manager, Lee Kingsley. Secor further showed how ruthless for success he had become by headhunting J.Herbert Newport, a former Smith Premier and later L.C.Smith manager in Chicago, to take the sales reins from Kingsley.
Confidence in the new Secor began to rise, and with it the capital stock, from an initial $30,000 to more than half a million. The major backers of the revitalised typewriter enterprise were the Ousatonic Water Power Company (not Housatonic, as stated by Typewriter Topics), represented by dam engineer Daniel Seymour Brinsmade (1845-1912) and his son Daniel Edwards Brinsmade (1874-1956), and Albert Emore Richardson (1844-1919) of Burlington, Vermont, a principal of drug company Wells Richardson, one of the largest drug companies in New England, with offices in Montreal, London and Sydney. Richardson put his son Frederick Albert Richardson (1873-1943) in charge of the totally revamped typewriter organisation. The vice-president was Charles Nelson Downs (1859-1924).

With the groundwork done to ensure Secor could turn around his previous misfortunes, the new Secor typewriter was launched in April 1911: 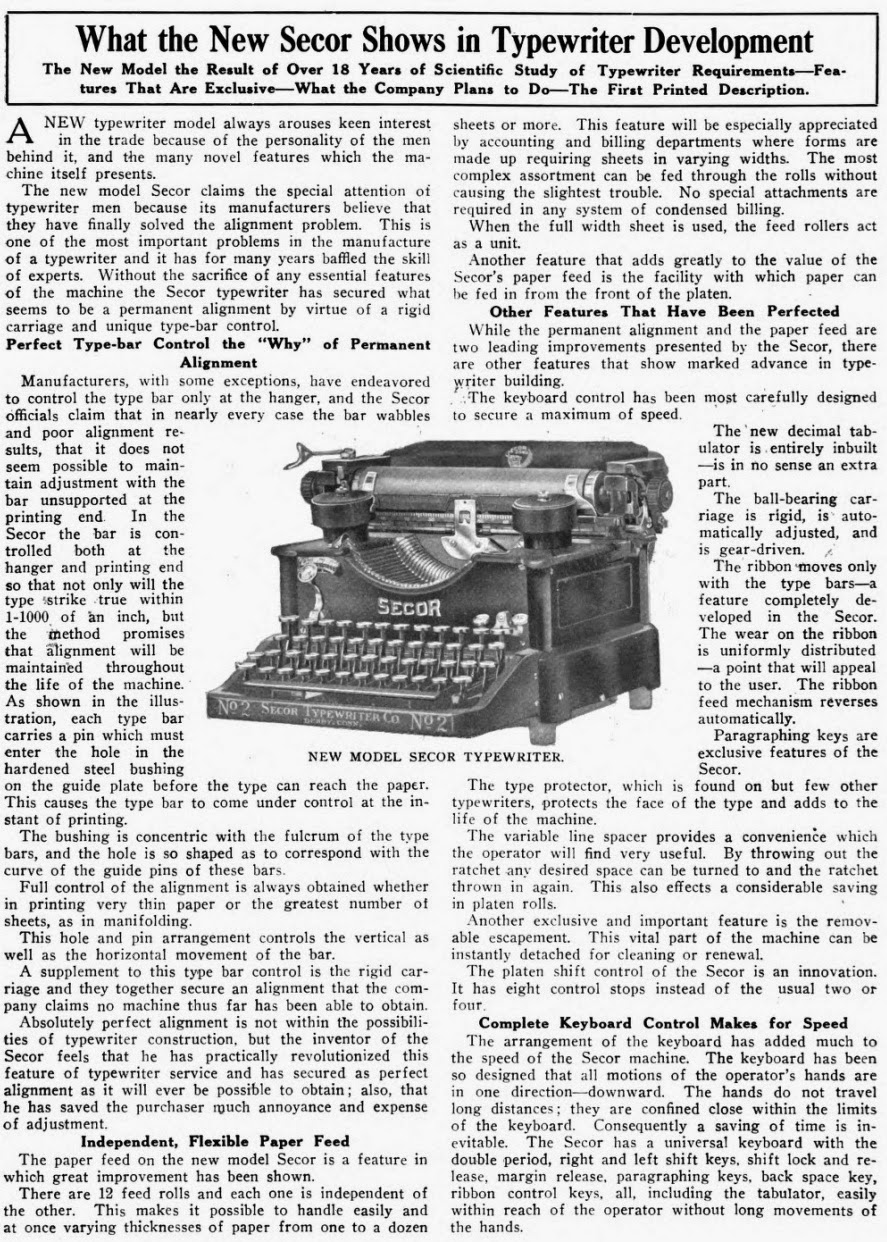 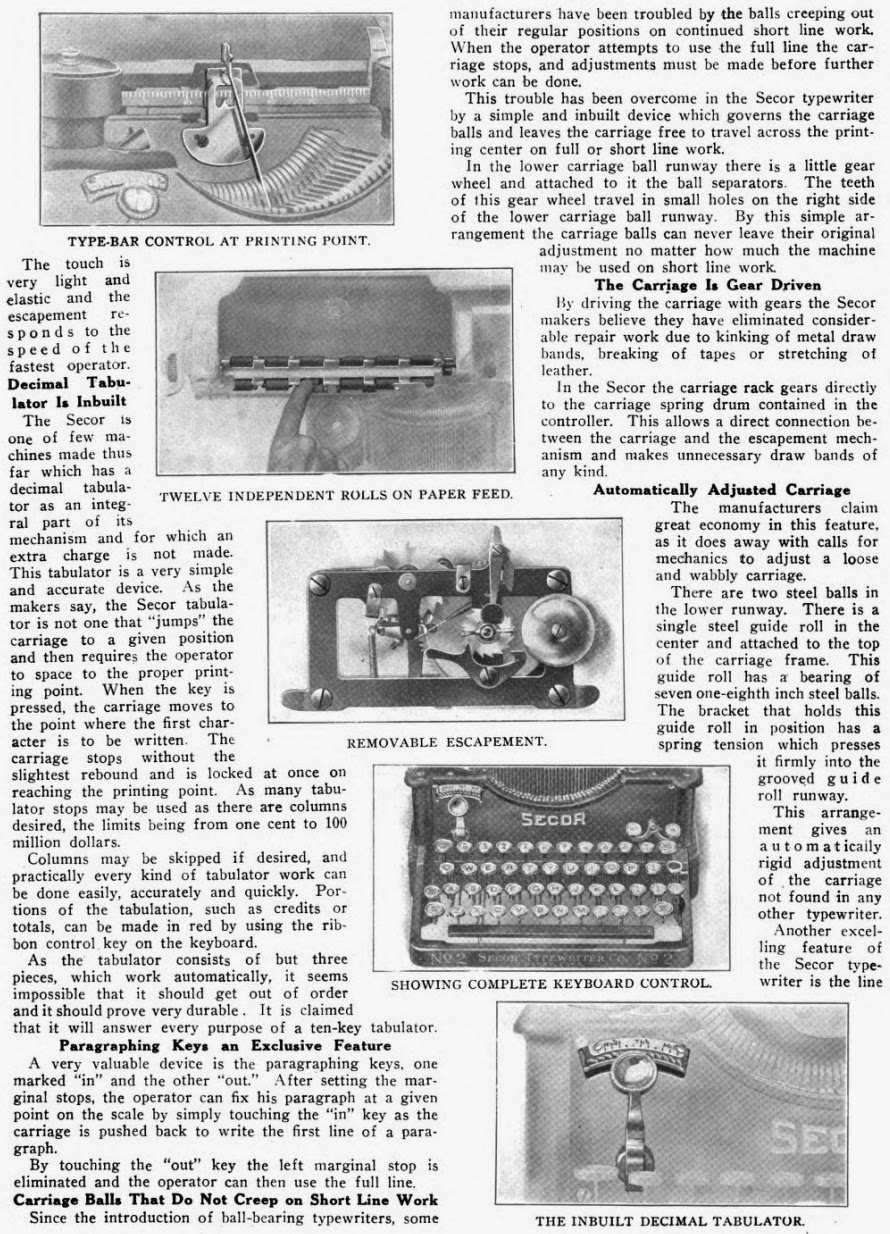 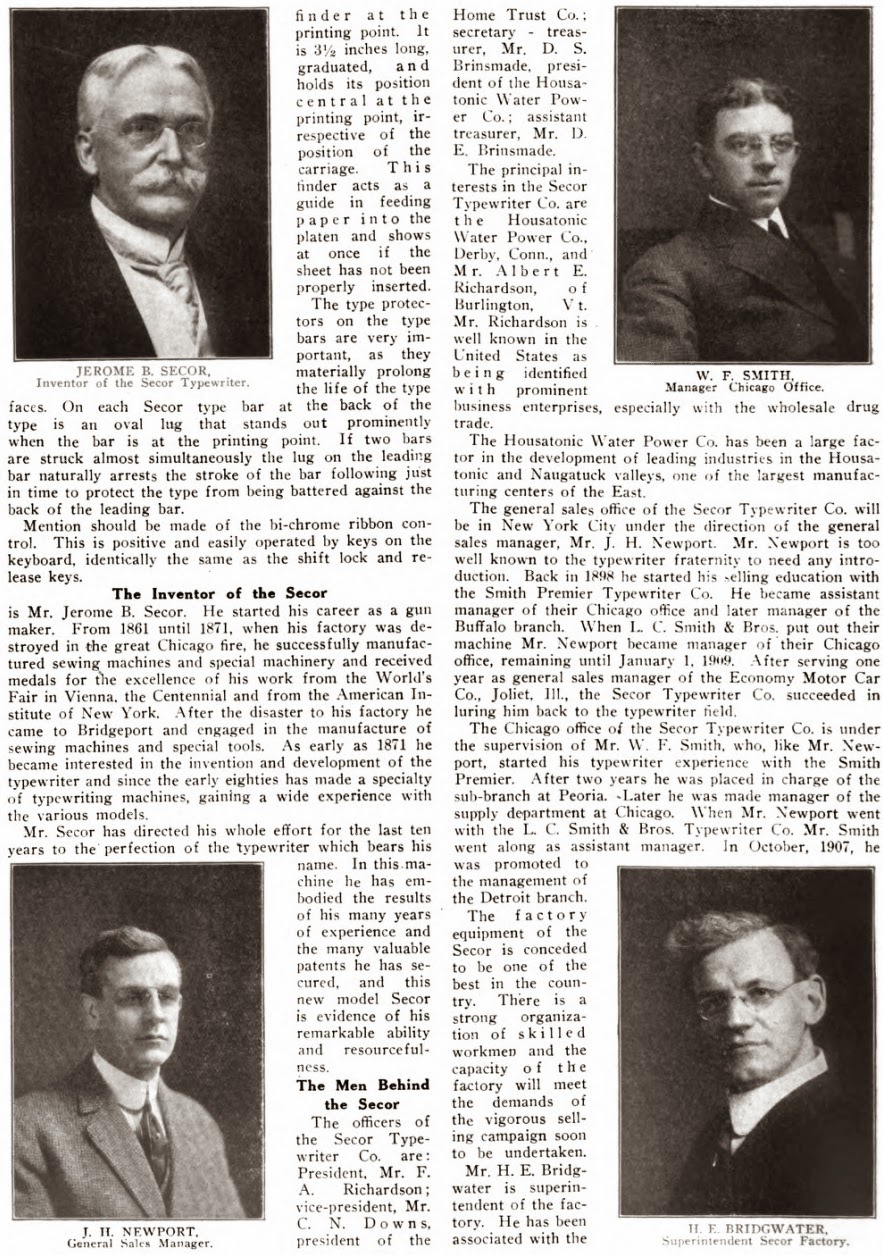 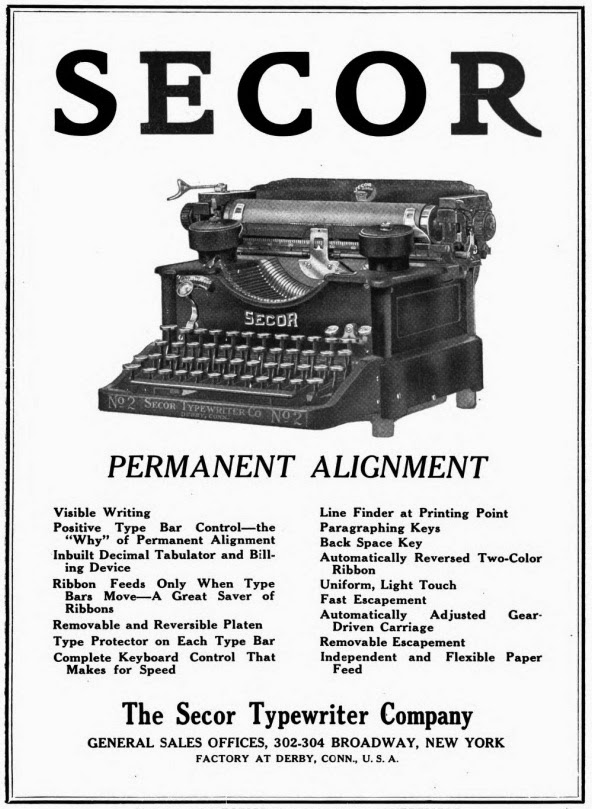 At first it was thought Secor had recruited Newport to work under Kingsley. But just before the launch of the new model, the typewriter industry was stunned to learn Kingsley's contract had been terminated: 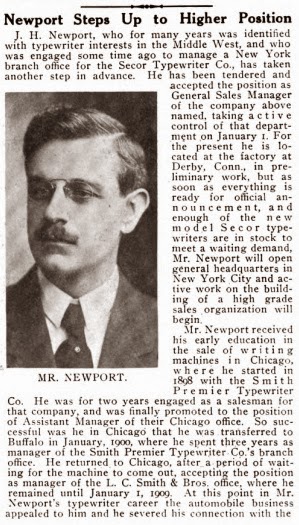 At the end of the first year of the relaunch, the company reported: 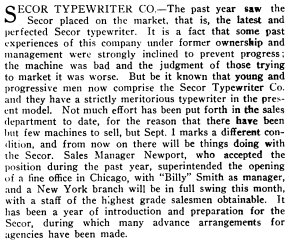 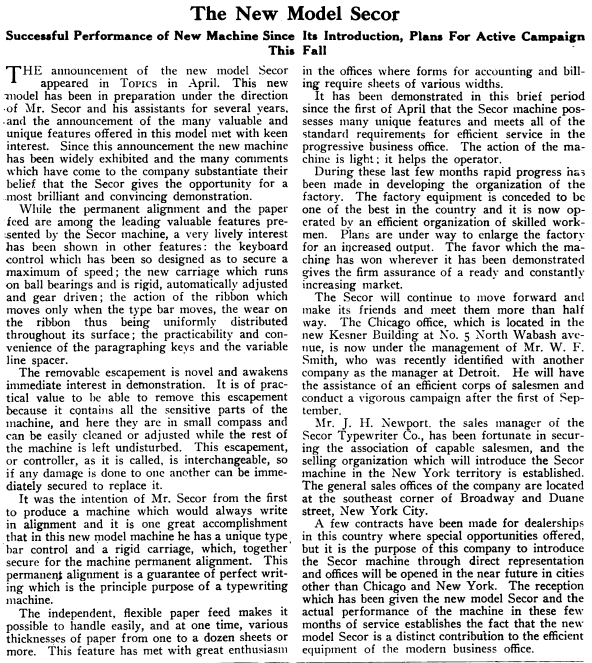 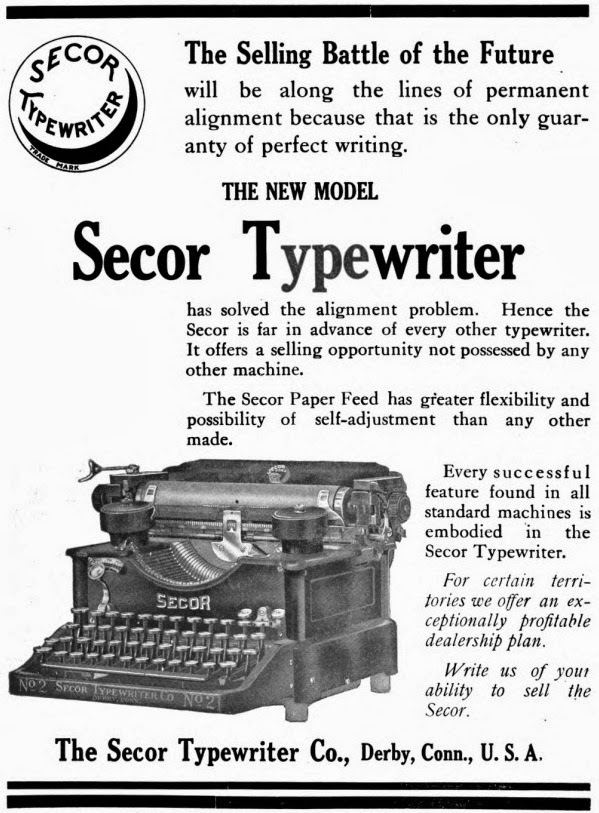 Unfortunately, the selling battle of the future was all too soon lost. The Secor plant, also once the home of the Williams, was sold in December 1915 to Hudson Maxim's Maxim Munitions.

It is perhaps, then, hardly surprising that Jerome Burgess Secor is far better remembered today as a brilliant toy designer than as an ultimate failure as a typewriter inventor.
Secor was to be described as an "American mechanician extraordinary". But this was mainly because of his "extremely fascinating, extremely ingenious mechanical toys". "Unquestionably, this is largely due to the fame of one of his products, the only mechanical bank which he ever manufactured, the Freedman’s Bank." 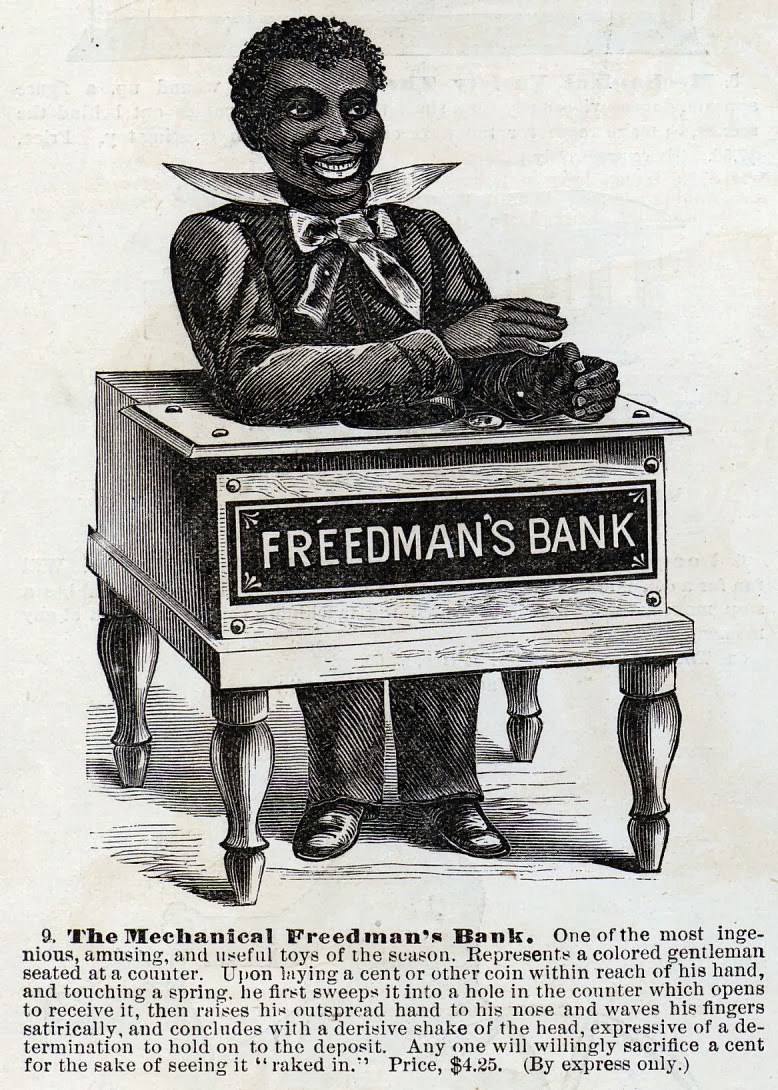 Secor was certainly a pioneer of the American toy industry, manufacturing a series of intriguing mechanical toys from 1878 to 1882, "the finest toys of their kind which have ever been manufactured in the United States".
Secor was born at Liberty Village, New York, on October 8, 1839. The family was of French Huguenot extraction. His father, Oliver, was a gun maker, and maintained a gun shop on Avenue A in New York. The family moved to Honesdale, Pennsylvania, where Secor attended Honesdale Academy, then to St Louis and Weston, Missouri, and finally to Peoria, Illinois. Among Oliver Secor's customers, according to family tradition, were Kit Carson and Jefferson Davis.
In Peoria, Jerome Secor built and sold toy locomotives and boats. At 20 he took a job in the model room of a sewing machine factory in Chicago. There he perfected a device to “take up” the tension in the machine, which he sold to the company for $1000. With this he opened his own small factory, but it was destroyed in the great Chicago fire of October 8, 1871 - Secor's 32nd birthday. He moved to Bridgeport, Connecticut, and started the Secor Sewing Machine Company in East Bridgeport. Secor bought half of a double house on West Avenue in Bridgeport and found by chance that the owner and occupant of the other half was Edward Ives, well on his way to becoming America’s foremost toy maker. As a sideline to his sewing machine business, Secor started to manufacture mechanical singing birds in cages. A music box in the base, for which Secor not only made the designs and tools, but also composed the tune, furnished the song. The birds were covered with real feathers and wired to perform lifelike movements in conjunction with the tune. 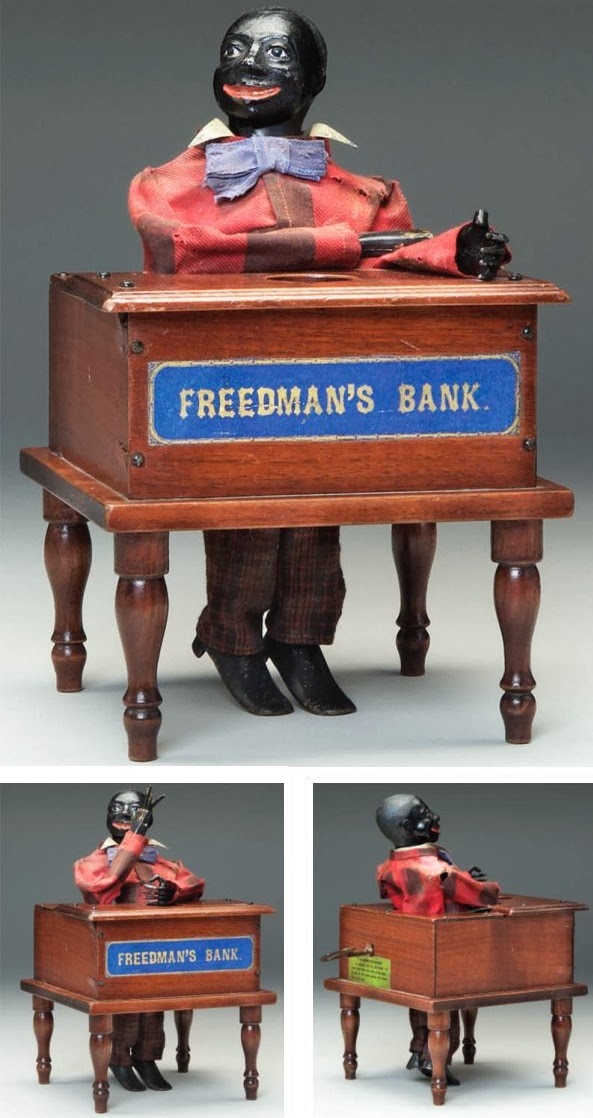 After financial setbacks in the Panic of 1876, Secor closed his sewing machine plant and turned to toy manufacturing full-time. The Freedman’s Bank at one time sold for $66 a dozen wholesale and about $7.50 retail. Secor also patented a cast iron clockwork locomotive and a small singing bird, or “mechanical warbler”.
Secor went on to work for the Bullard Machine Tool Company and later resumed the manufacture of sewing machines. In 1899, he left Bridgeport for Derby to take charge of the Williams Typewriter Company. He had made the tools for this machine, and also for the American Typewriter Company. Secor took over the Williams company and the last-model 1904 Williams No 6 was made by the Secor Typewriter Company. The last Williams was produced in 1909. Secor created an entirely new machine, his Model 1, launched in 1906.
After the failure of his Model 2, Secor started making small tools and special machinery once more. During the First World War, he made tools for rifle production by Maxim and experimented with a rapid fire gun. He also took up the manufacture of small toys again. He retired in 1919 but still designed new machinery for the manufacture of rubber tires from a small shop in the attic of his house in Derby.
He died on September 18, 1923, aged 84.

Posted by Robert Messenger at 23:33

Very valuable information! I've saved this in my "Secor" folder and will eventually compare all the technical points to my own Secor no. 2.

The "Freedman's Bank" is a curious creation. It seems racist yet also, perhaps in a perverse way, celebrates the ex-slave's newfound ability to accumulate a little money.

Jerome B Secor was my 3rd great grandfather. I remember visiting my great grandmother's house as a child and playing with her mechanical toys and banks.