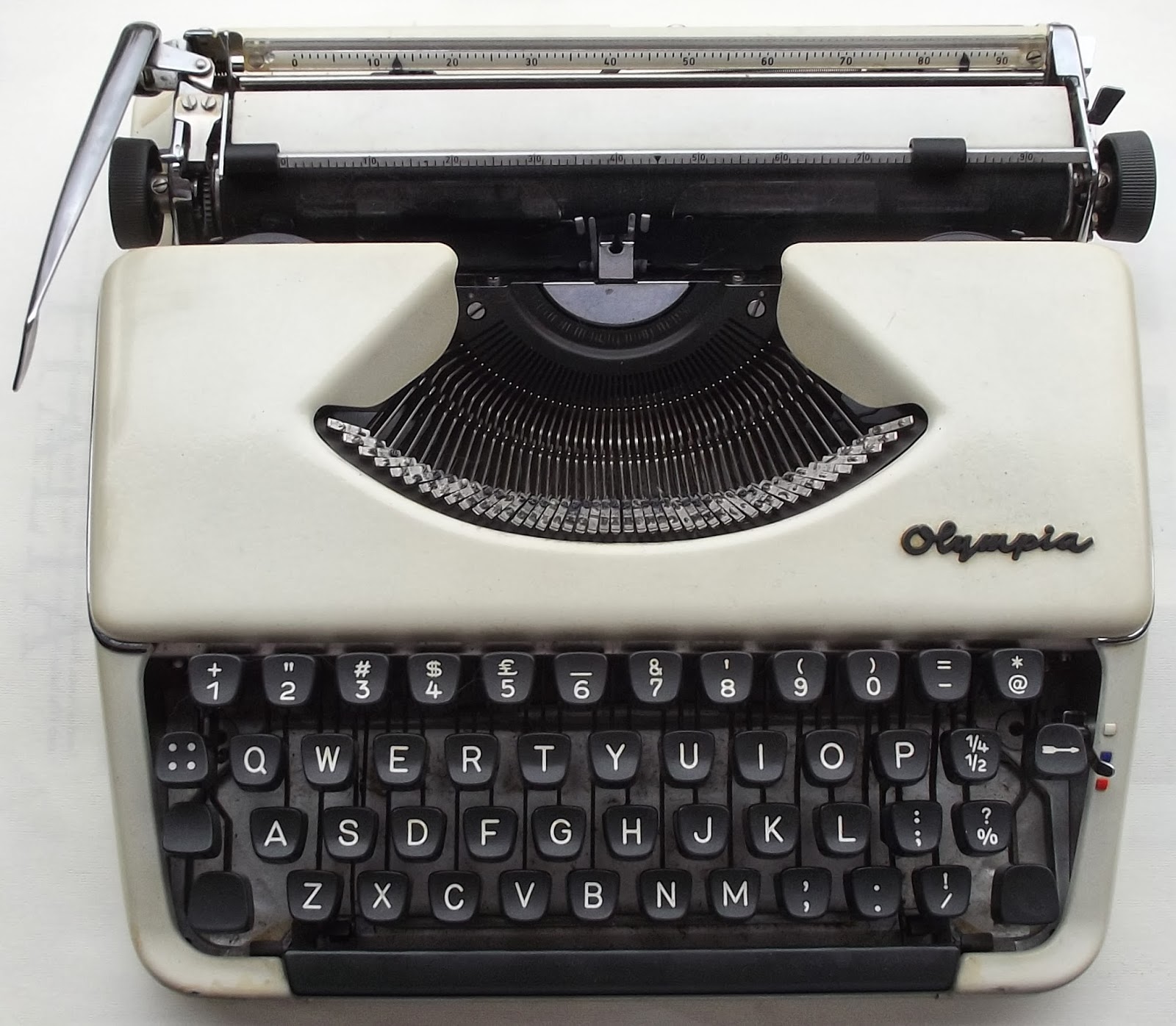 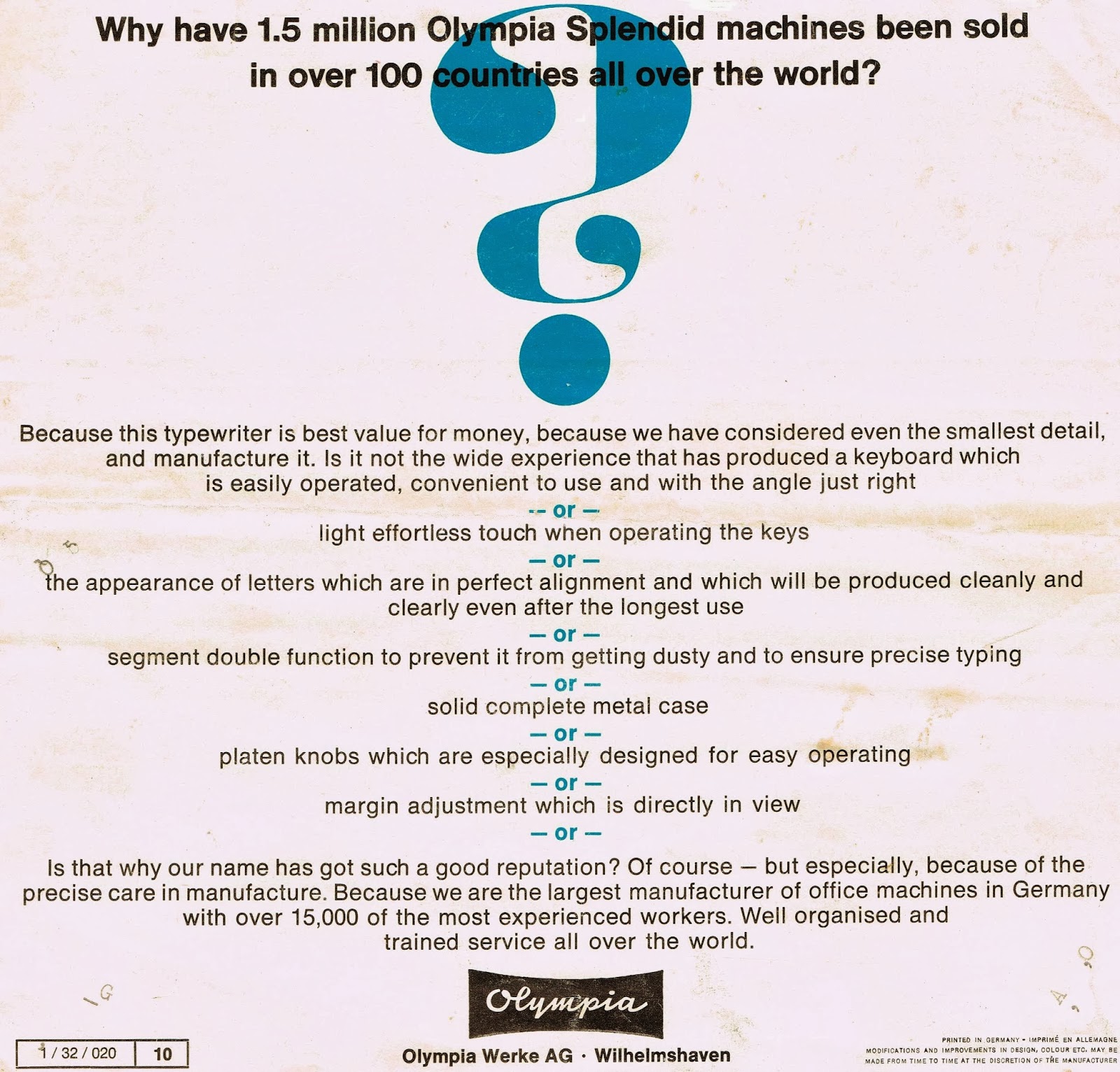 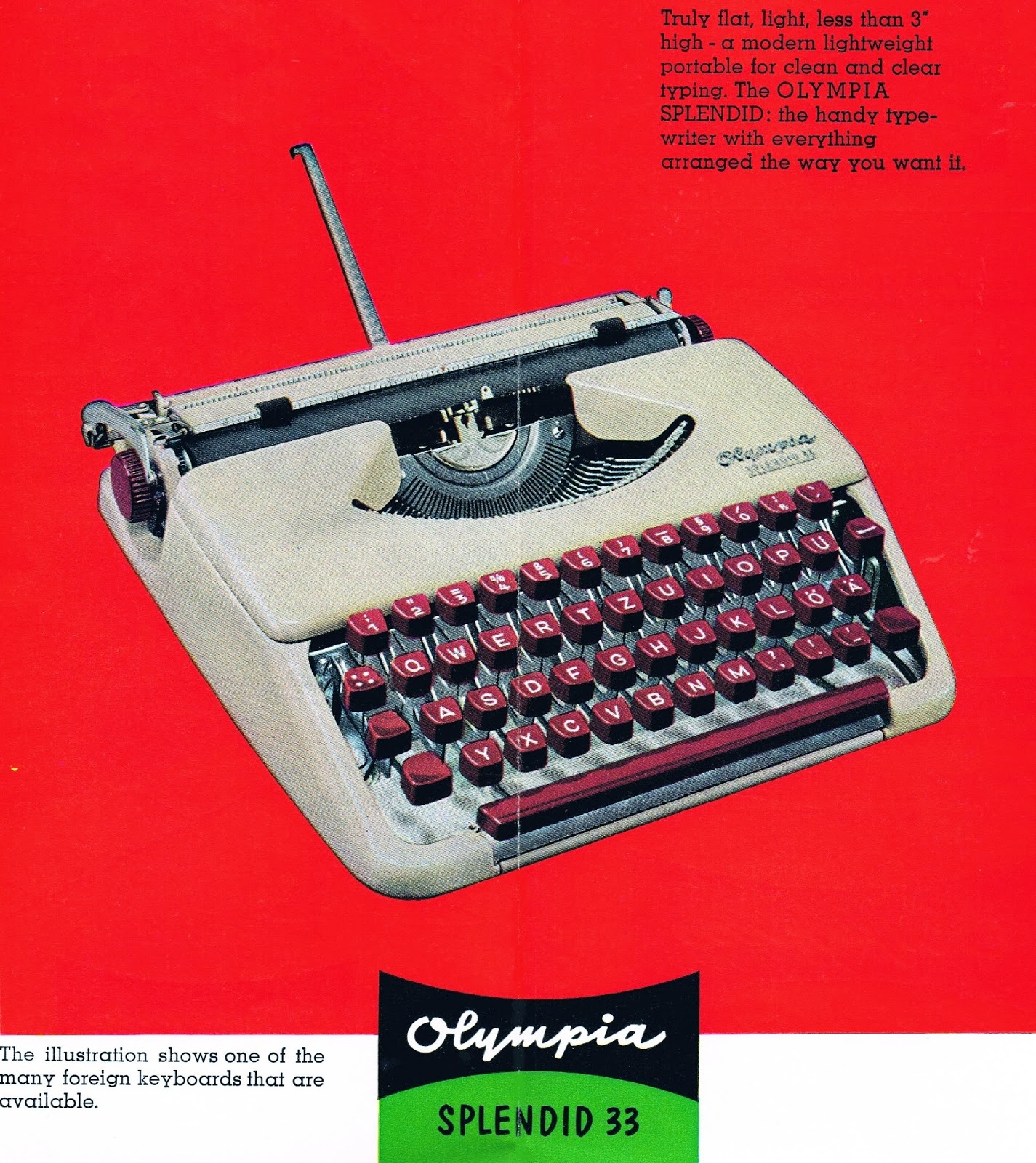 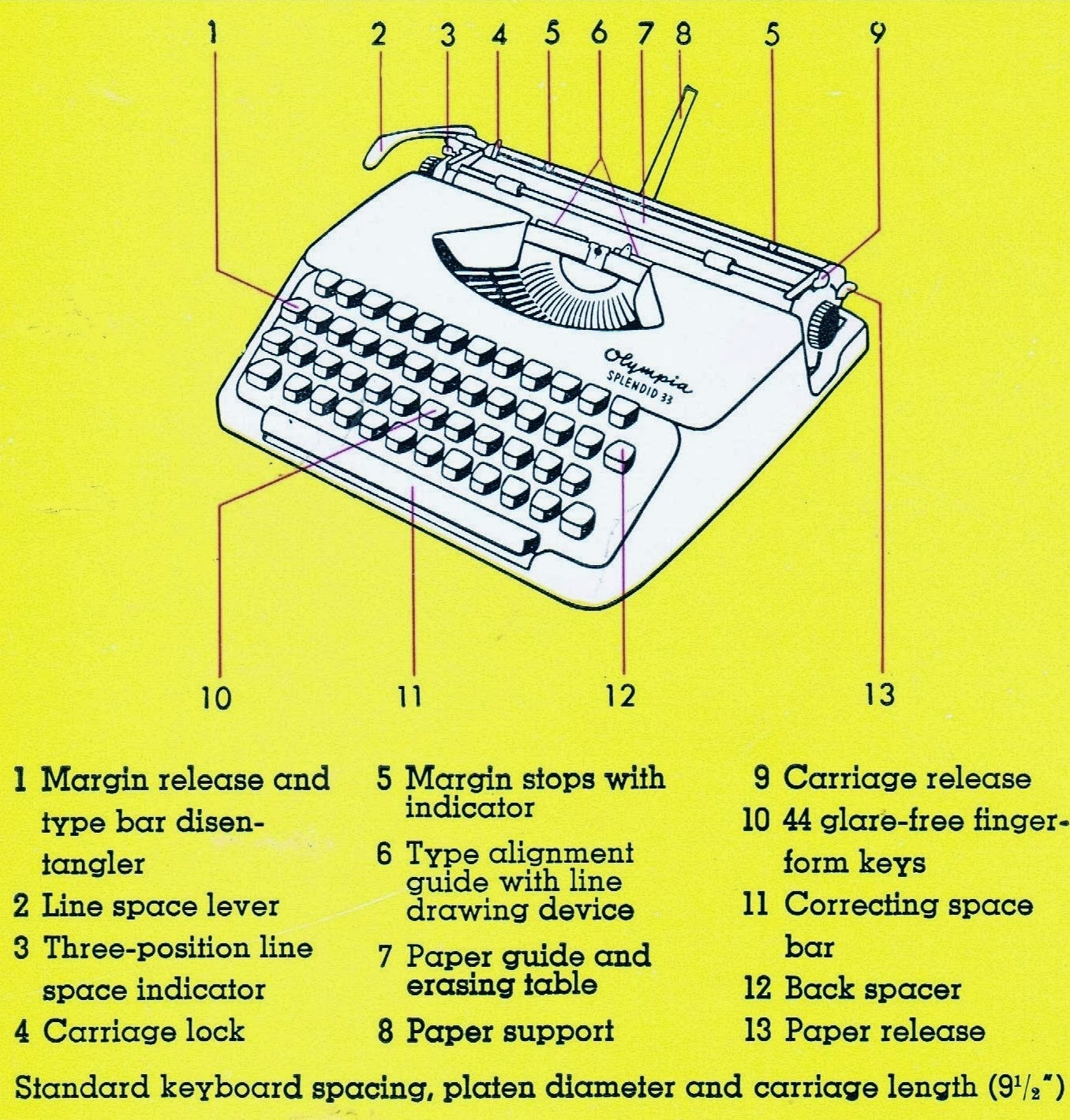 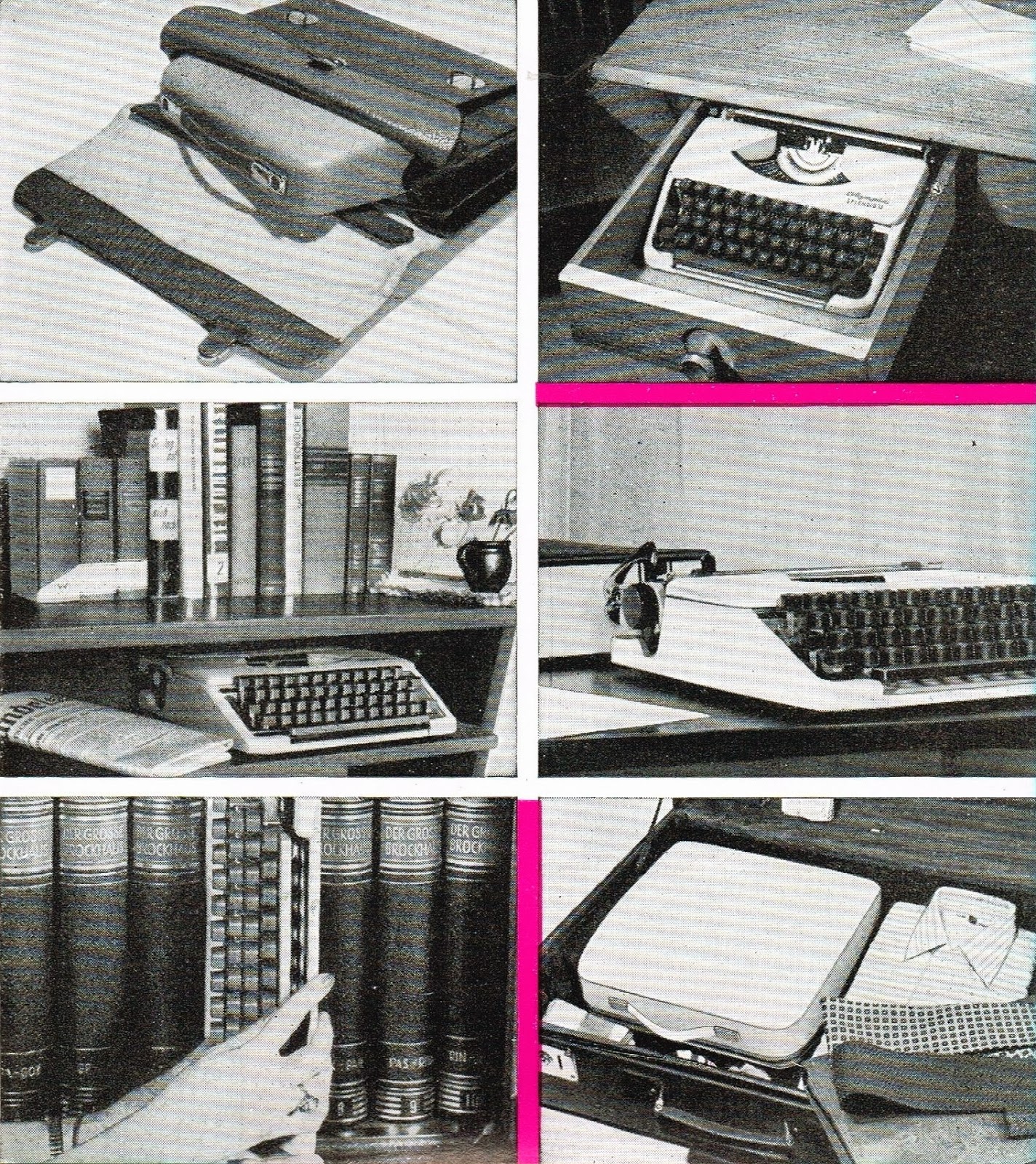 1963 Splendid brochure
On this day in 1955, Olympia's lead typewriter design engineer Anton Demmel patented in Germany his revolutionary "typebar actuating mechanism" for his ultraslim 7.5cm (2.95 inch) high Olympia SF (sehr flach = very flat; not schreibmaschine flach, as commonly held) portable. The invention was patented in the US in October 1958.
Demmel claimed that previous efforts in changing the transmission ratio of the lever systems of ultraslim portables had not obtained "the optimum striking velocity". So he came up with a different way of doing it (described in detail below).
The SF portable (seen above) was launched in 1956 and two years later became the Splendid series (33, 66, 99). The mask for the Olympia SF De Luxe portable which is nowadays most commonly referred as the SF, with the same typing action but a sloping ribbon spools cover (below), was designed by Demmel in 1959 to be part of the new line of Olympia typewriter designs which included the SM7 and SM8 (and later the SM9). 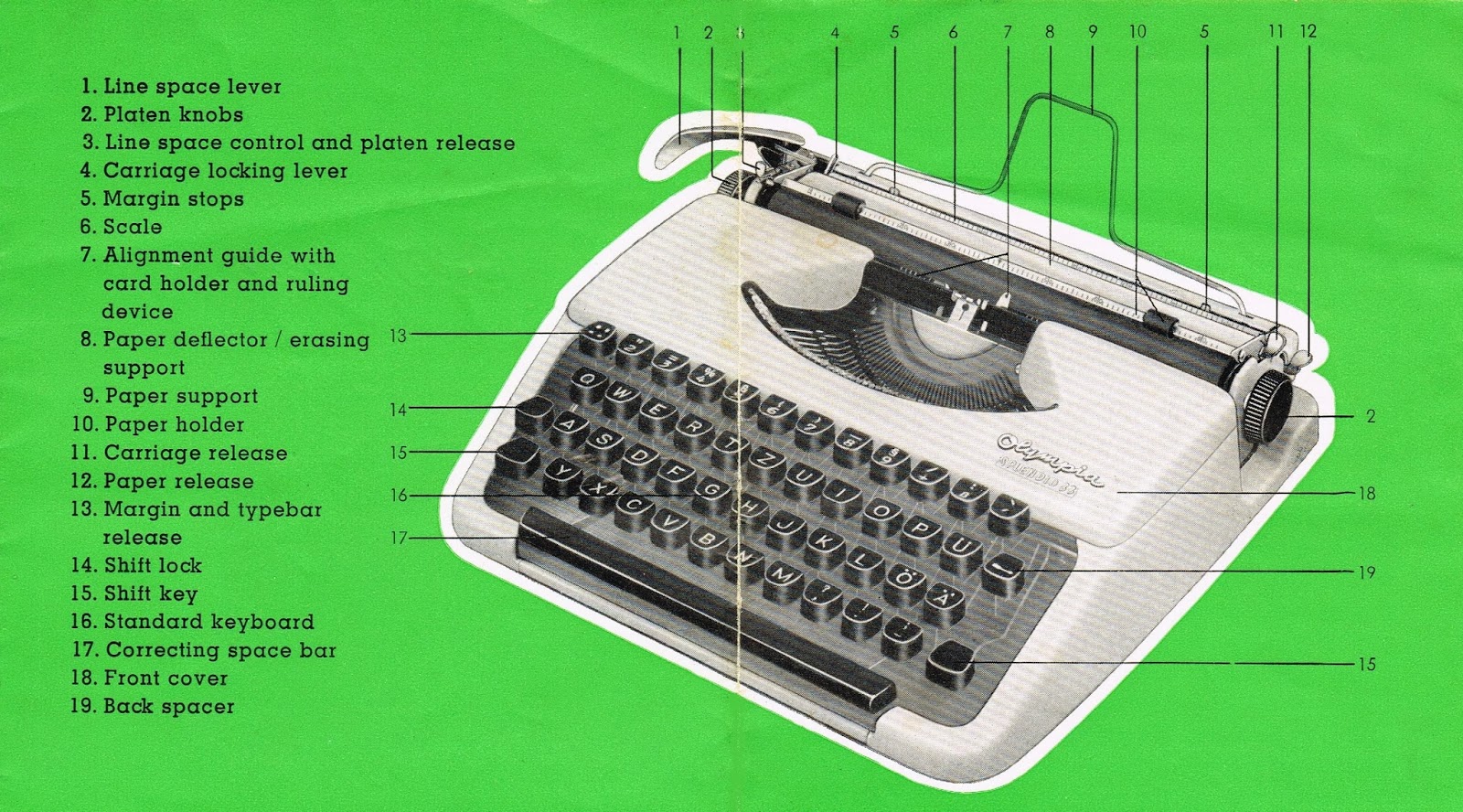 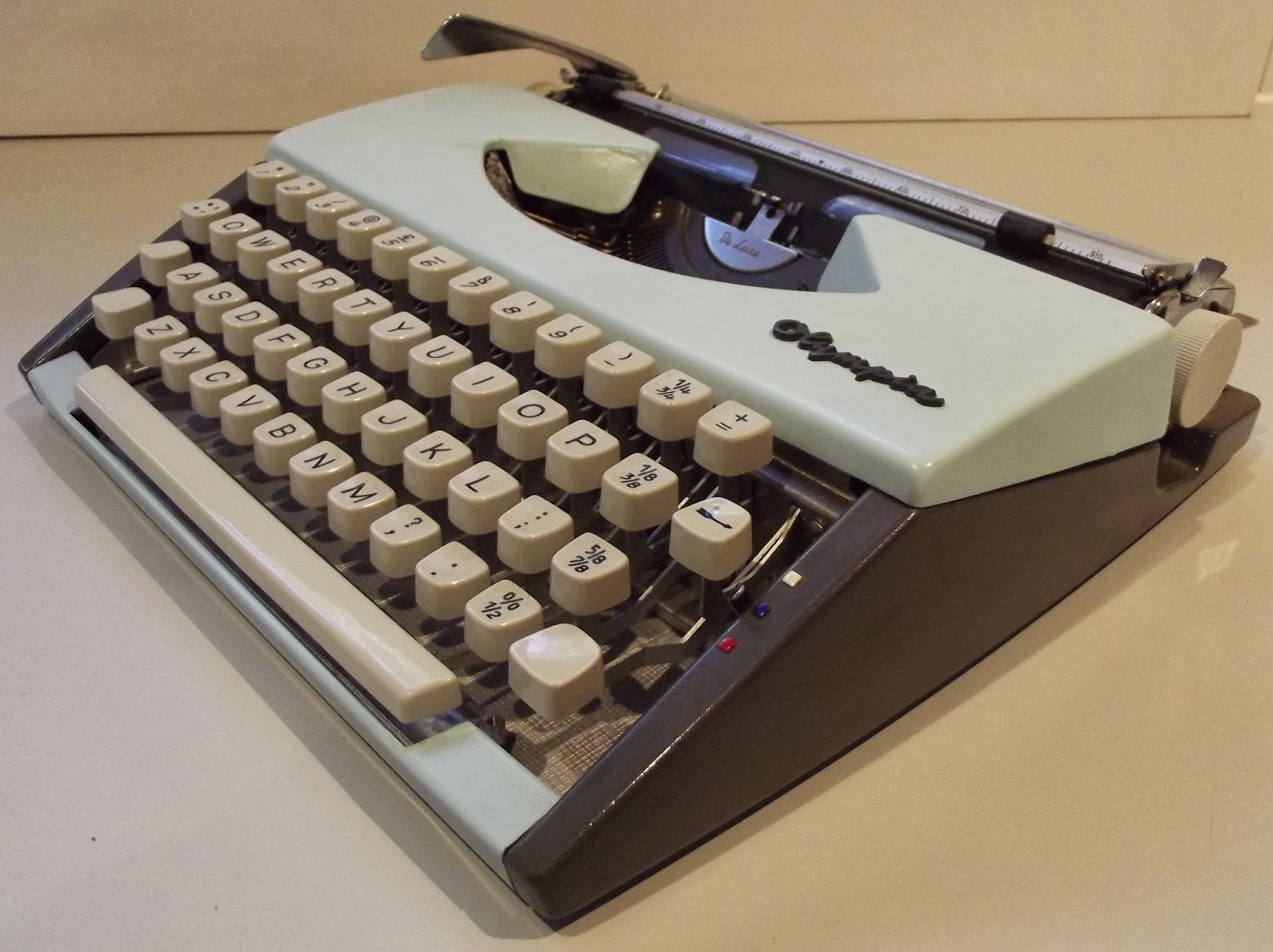 The later SF. What we call now the Splendid was the original SF. 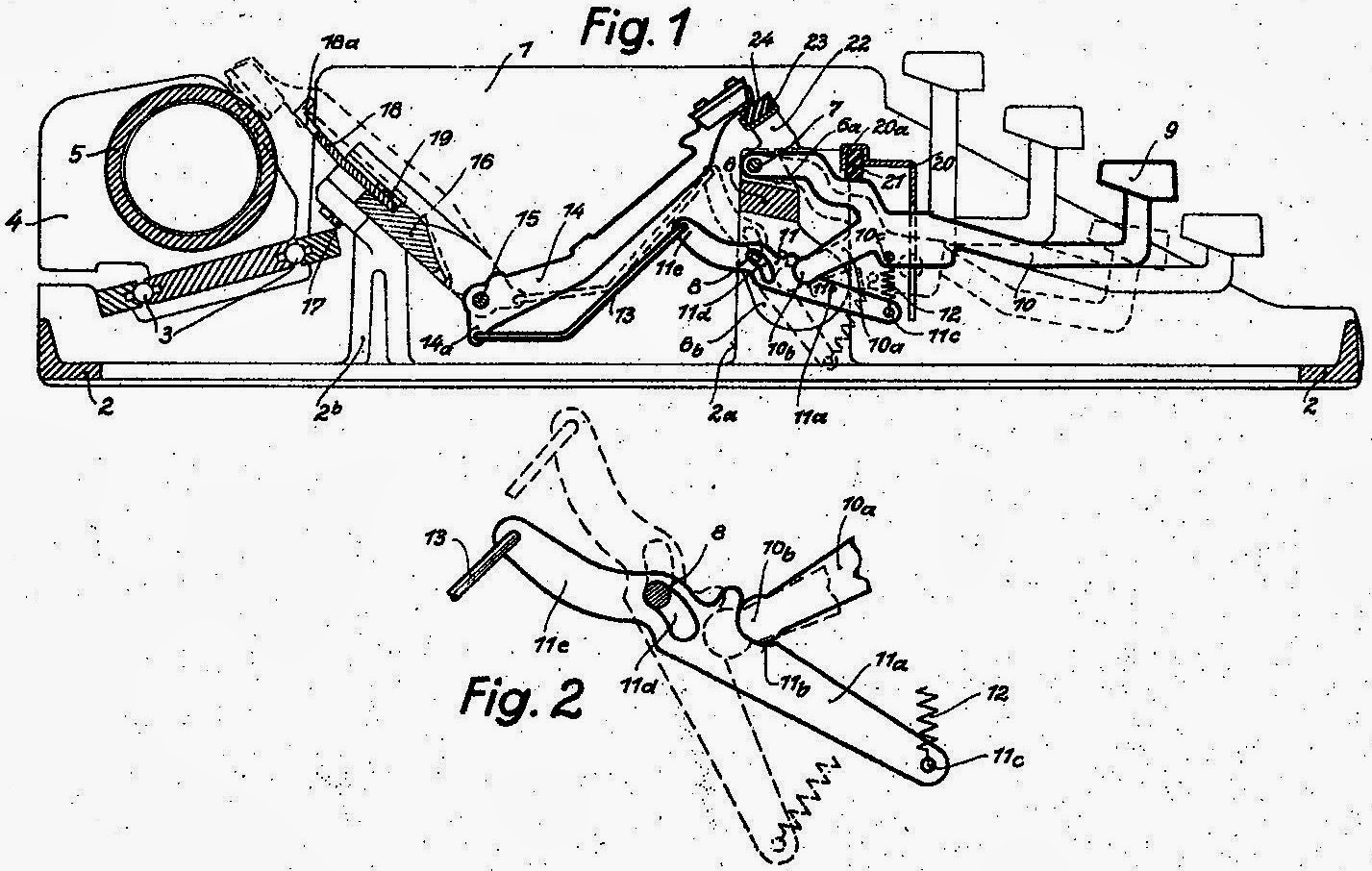 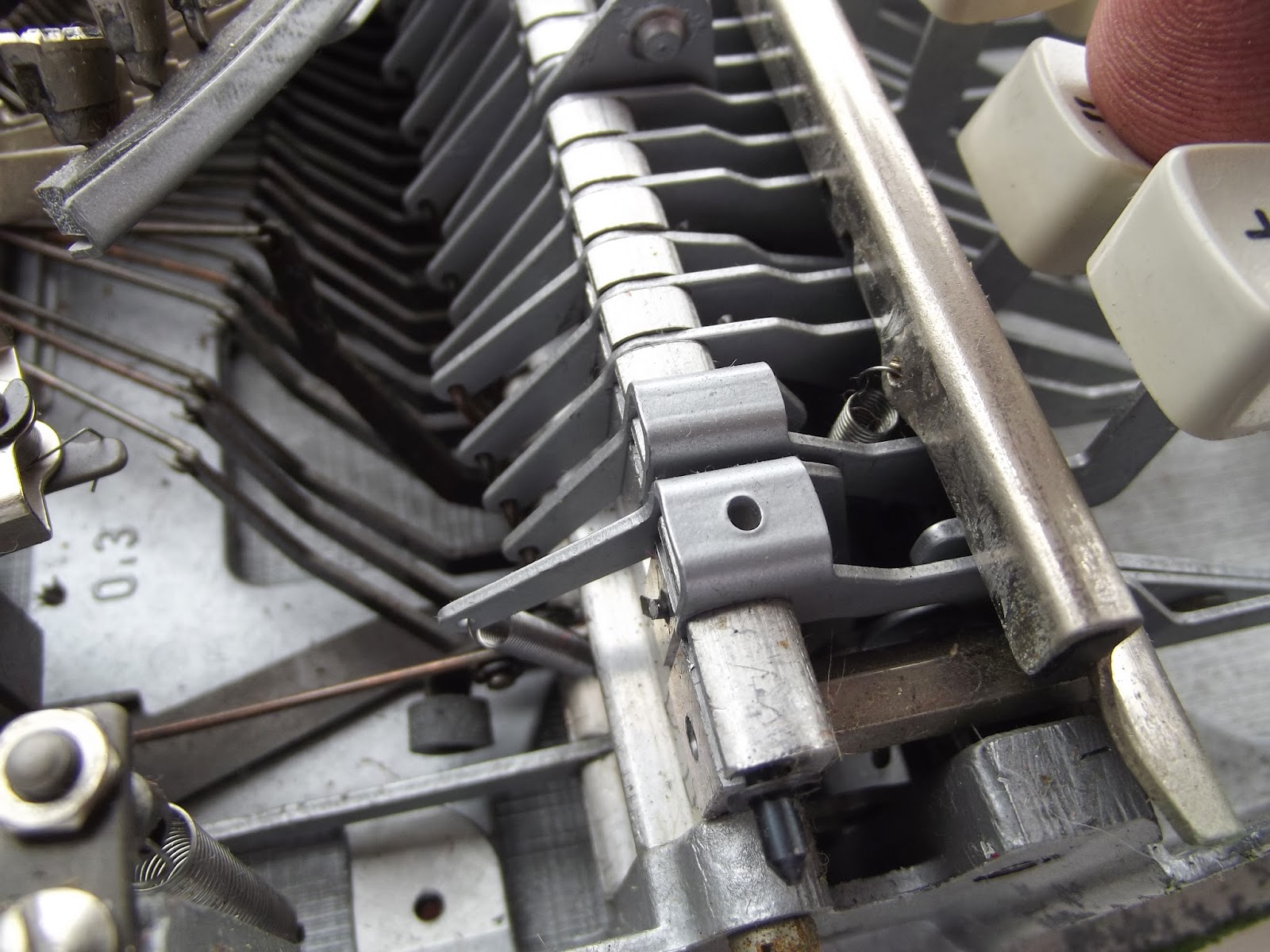 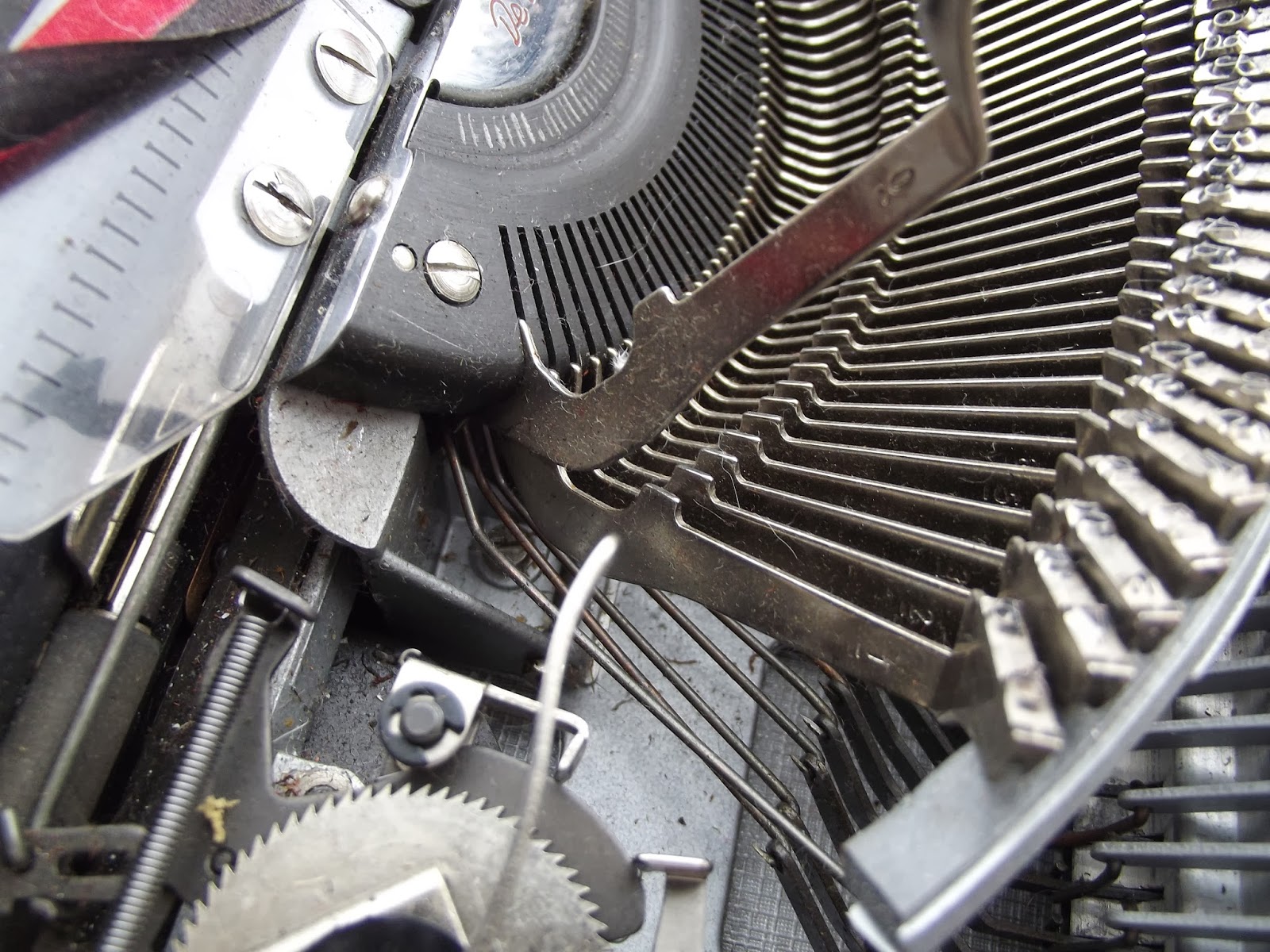 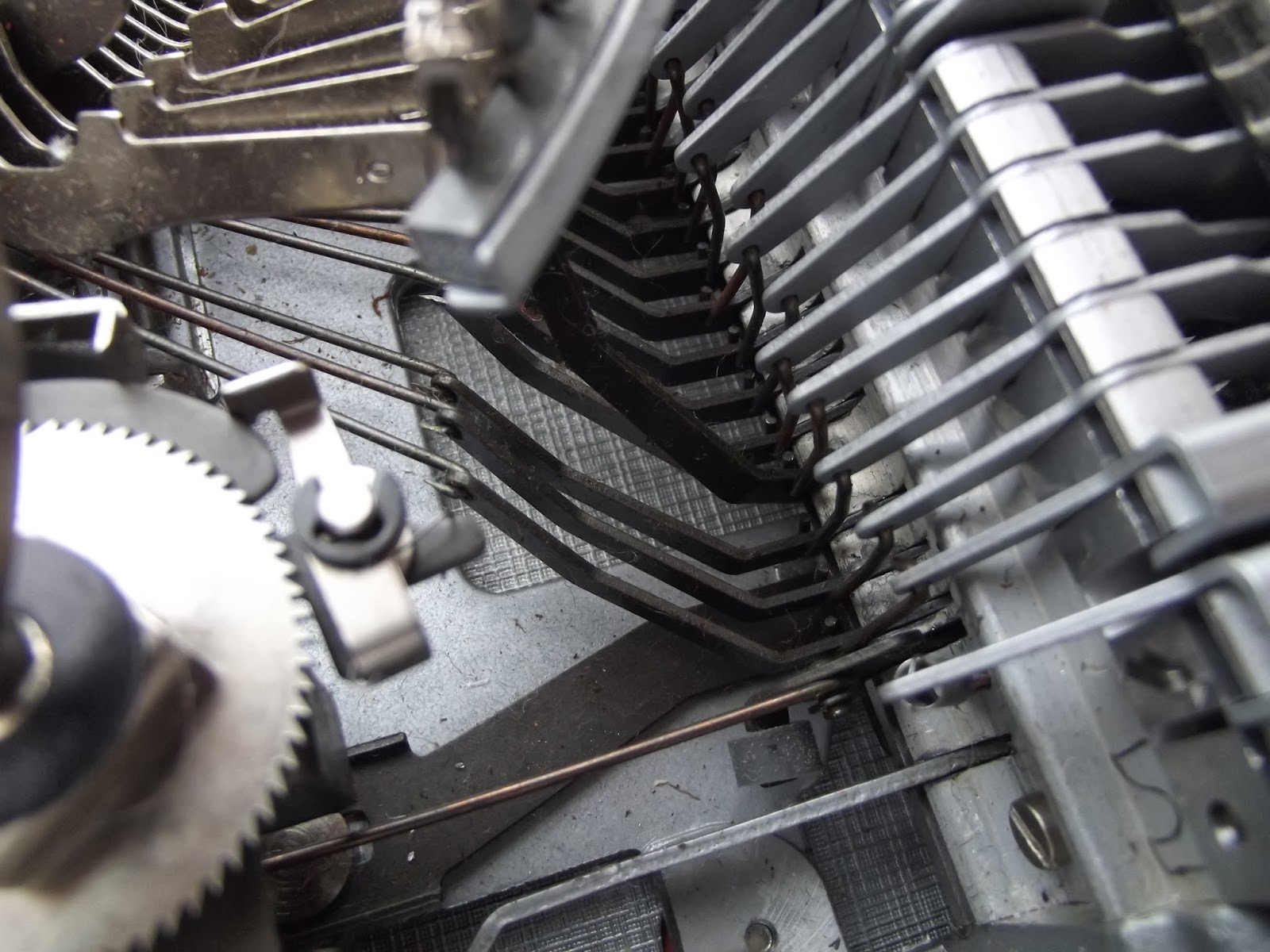 Demmel described the typing action thus:
"The invention is particularly designed for use with typewriters having a very low construction - that is, those known as portables wherein the key levers are coupled to their respective typebars by means of connecting levers and drawbars. In general, the connecting levers are each mounted for pivotal motion on an axis intermediate the ends of the lever, thereby establishing two lever arms, one such arm being coupled to the associated key lever, and the other arm being pivotally connected at its outer end to one end of the drawbar, the other end of the latter in turn being pivotally connected to one arm of the pivotally mounted typebar, the other arm of the typebar carrying at its outer end the type (slug).
"With typebar actuating assemblies of the kind above referred to, efforts have been made to impart to the typebar, during the last portion of its operating or striking stroke, the greatest possible acceleration in order that the type shall strike the paper with the highest possible velocity and momentum, thereby assuring sharp and dark carbon copies even when several sheets of paper, or thick paper, is used. A secondary advantage inherent in high speed typebar actuation is that it enables a corresponding increase in typing speed.
"In order to obtain a high striking velocity for the typebar it has been suggested in the past that means be provided for changing the transmission ratio of the connecting lever as a function of the change in lift imparted to the lever by depression of the key lever. However, so far as is known, the previous constructions have been limited to arrangements wherein it has been possible only to progressively shorten the effective length of that arm of the connecting lever at the side of the pivot axis connected to the key lever.
"The effective length of the other arm of the connecting lever at the opposite side of the pivot axis and which is connected to the drawbar remained constant. Due to the relatively slight maximum amplitude of key lever motion permissible in typewriters of the so-called low construction or portable kind, to bring the typebar from its rest position into the striking position, the prior suggested arrangements for changing the transmission ratio of the lever system do not obtain the optimum striking velocity for the typebar to be accelerated.
"The principal object of the present invention is to provide an improved arrangement for increasing the velocity of the typebars with increasing displacement of the respectively associated key levers, and is characterized by the fact that the connecting levers between the key levers and typebars are mounted for rotation on an axis the position of which changes progressively in such manner that the distance between the instantaneous pivot axis of the lever and the point of connection to the key lever is progressively shortened, while the distance between the instantaneous pivot axis of the connecting lever and the point of connection to the drawbar is simultaneously progressively lengthened. "The net effect is a compound or two-fold increase in the velocity of the typebar during its stroke. One such increase is due to the progressive increase in angular velocity of the connecting lever about its pivot axis and the other increase arises from the progressively increased rate of displacement at that outer end of the lever arm which is coupled to the drawbar, for a given change in angular displacement of the lever about its axis.
"A more specific object of the invention is to provide for a progressive shift in the axis of rotation of the connecting levers according to the arrangement described in the preceding paragraph wherein each connecting lever is provided with a closed arcuate slot intermediate its ends through which a shaft extends and which establishes a pivot axis for the connecting levers, the longitudinal axis of the slot being disposed generally parallel with the longitudinal axis of the relatively straight connecting lever, and the lever being shifted, during its pivotal movement, generally longitudinally of itself on the shaft from one end of the slot to the other, thereby effecting a progressive decrease in the effective length of the input lever arm to which the key lever is connected and a simultaneous progressive increase in the effective length of the output lever arm to which the drawbar is connected.
"Thus the advantage of the particular novel connecting lever arrangement permits acceleration of the typebar to the greatest possible velocity which heretofore has been impossible to achieve with prior known constructions under comparative kinematic conditions and equal lift of key. Moreover, application of a typebar actuating mechanism in accordance with the present invention makes it now possible to achieve likewise advantageous striking and acceleration effects even for a typewriter of the so-called low construction with its inherently restricted number of working parts, although such effects were hitherto obtainable only in larger office machines with their essentially more ample operating mechanisms."
Demmel referenced two previous US patents, from De Witt Clinton Harris for a "typewriter action" in 1922 and Hugo Benzing for a "typebar actuating means" for Seidel & Naumann in 1932. 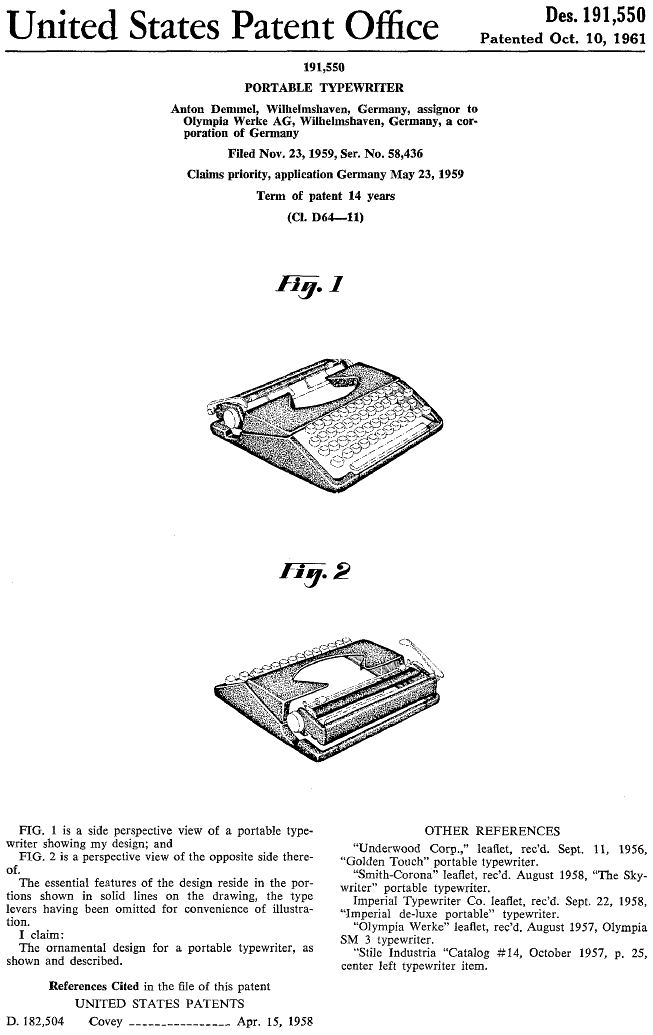 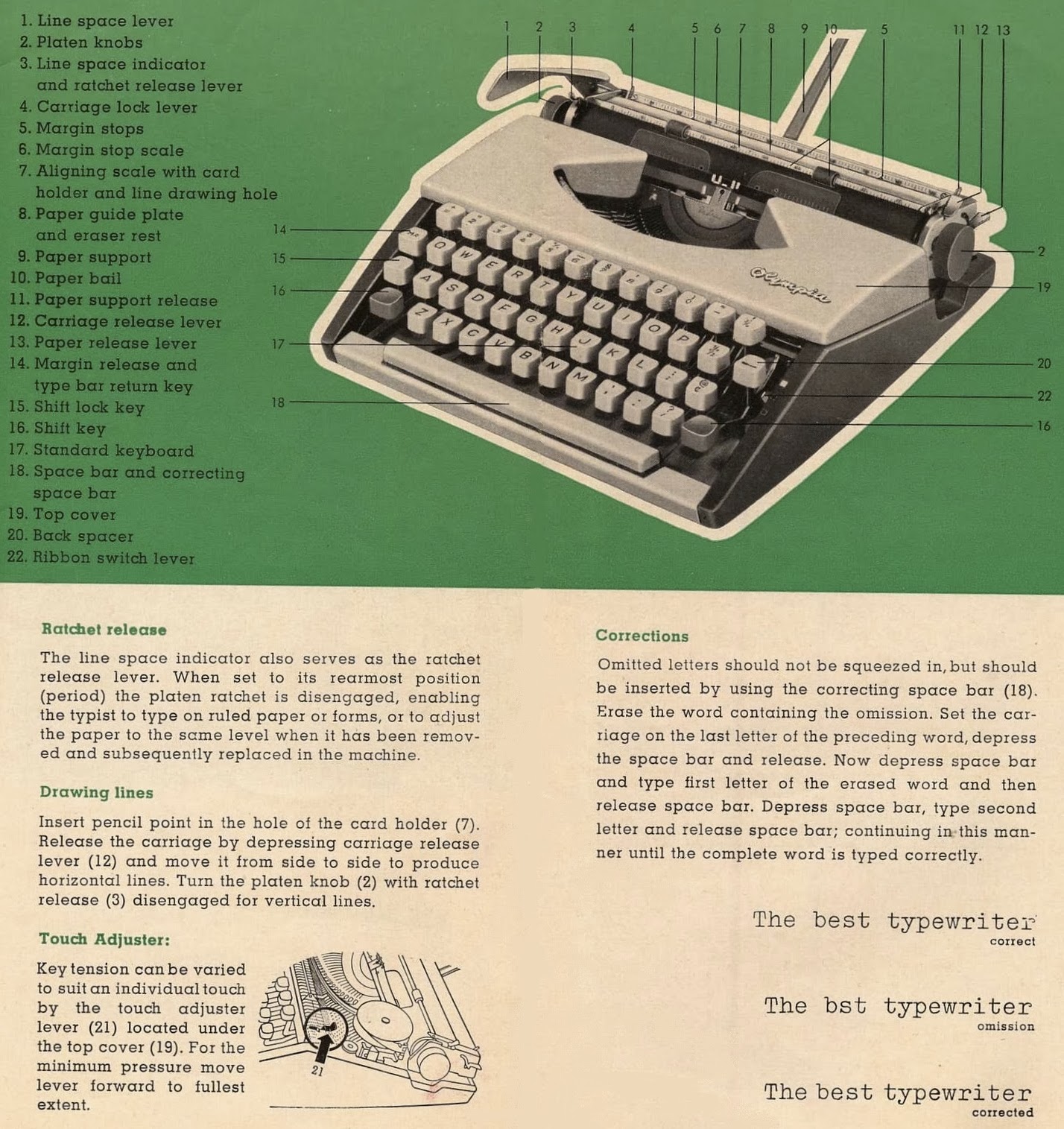 Also on this day, in 1935, Berthold Baumann applied for a US patent, assigned to Triumph, for a silent carriage return device which "diminished" the "disadvantage of an irregular [left-hand] margin, which occurs with the known devices". In various [existing] constructional forms, Baumann claimed, "spring-loaded pawls are used, which engage in ratchet wheels and are brought into and out of operation by friction members or similar arrangements. In these there is always the disadvantage that the left-hand margin becomes irregular, because the detents [a device used to mechanically resist or arrest the rotation of a wheel, axle, or spindle] or the loose pawl frequently do not engage with certainty at the right moment, so that the first letter of the line is typed in the second or third place. This invention adopts an entirely new way, making use of the known free-wheel arrangement in which small rollers balls make or break the connection between the ratchet escapement wheel and the toothed wheel of the carriage. This makes the device independent of springs, which become fatigued in the course of time, and of friction." 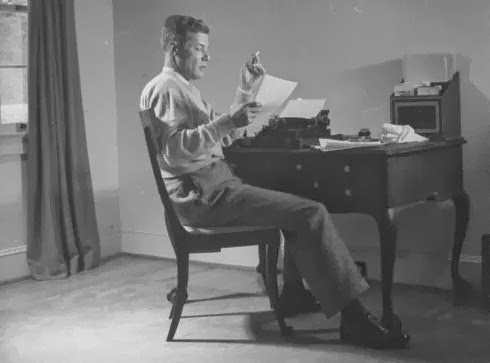 It is interesting that my last post in this series, a year ago, was about typewriters used by English writer Somerset Maugham. Just yesterday, by chance, I came across this image of American writer Glenway Wescott (1901-1987) using a typewriter in Maugham's house in 1942.
Posted by Robert Messenger at 14:47

Thanks for the detailed post on the SF. I recently bought a Splendid (Same machine - different name in the States). I did not know much about it other than it is a very good typewriter. The closest to the fine action of the Smith-Corona Skyriter that I have. Now I need to compare the Skyriter, SF, Baby (Rocket) and Montana all side by side. I'm sure the Montana will still come in last. I do wonder though if I will prefer the SF over the Skyriter.

I do know I can type faster on the SF and my SM4 than I can on any other Olympia even though they all are excellently engineered and built.