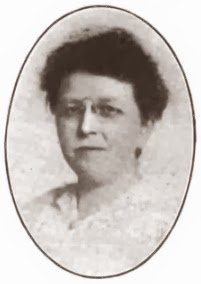 Was Nellie Myra Thatcher the world's first female typewriter repairwoman?
In 1919, the Elmira Arms Company, New York, believed so.
By that time, Nellie had been repairing typewriters of all makes for eight years. The company was the Elmira agent for L.C.Smith.
Typewriter Topics announced in 1916 that Nellie had been appointed manager of the company's typewriter department. 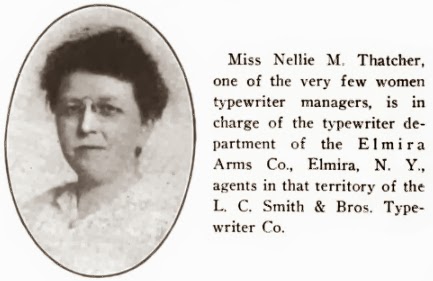 Nellie Thatcher was born in Elmira, Chemung, New York, in July 1872, the daughter of newspaper compositor Charles Cady Thatcher (1847-1931) and his wife Almira Caroline Thatcher (1850-1904). After living in Elmira for many years, Nellie moved to Petersburgh, Rensselaer, New York, to be near her older sister, Caroline Thatcher Hubbard (1870-1960), and Caroline's family. She was particularly close to her niece, Myra Hubbard Church. Nellie became a bookkeeper at an orphanage in Troy.
Nellie died, unmarried, at Cambridge, near Troy, on January 24, 1958, aged 85, leaving the bulk of her estate to Myra.

Posted by Robert Messenger at 15:11