This blog turned three-years-old today. This is its 1477th post. In about three weeks' time it will reach one million page views, and then the brakes will go on rather abruptly. This is the last monthly Typewriter Update. 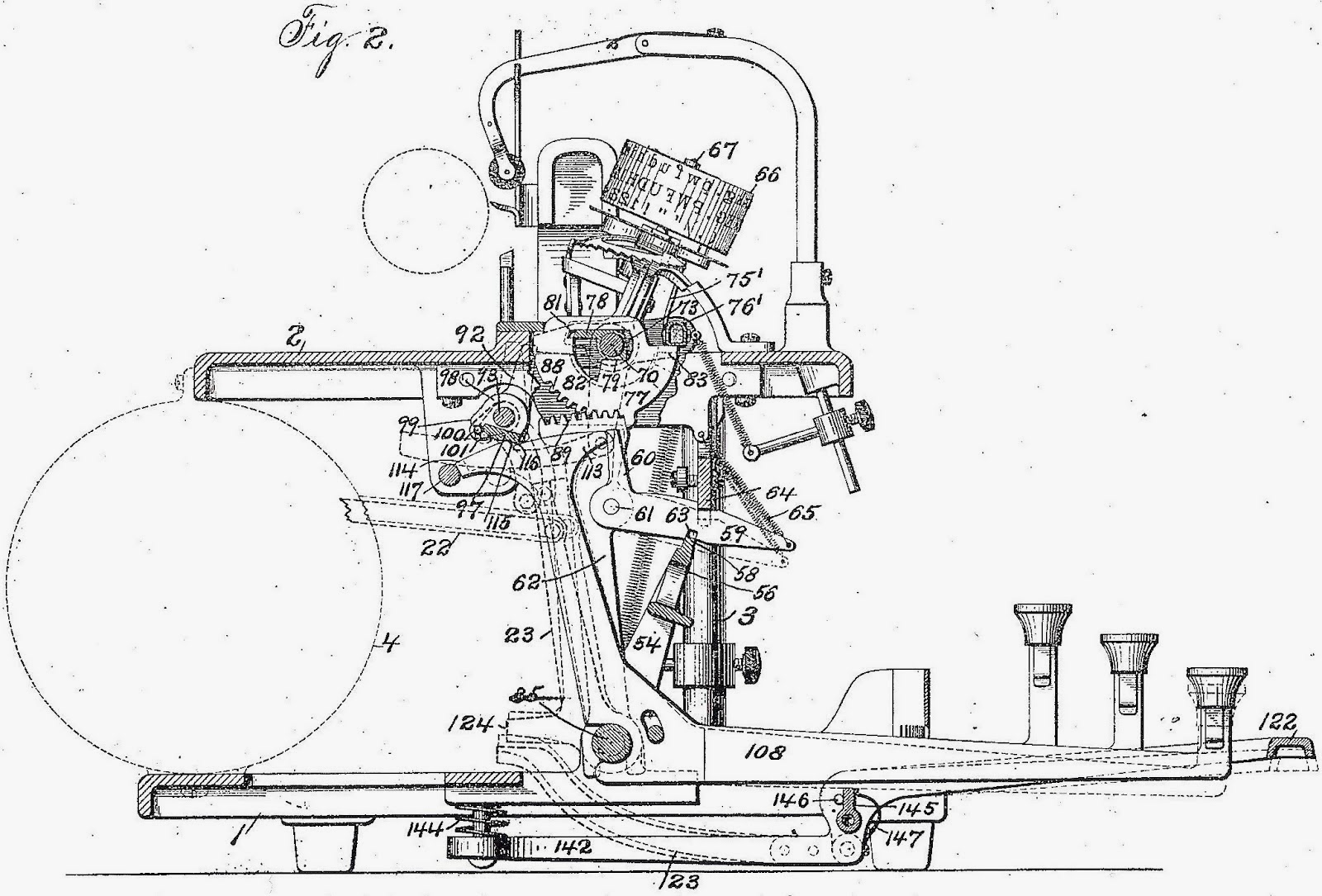 This electric Blickensderfer patent schematic will be used by theatre students at Duke University, Durham, North Carolina, to publicise April's staging of Machinal, by Sophie Treadwell. The play was inspired by the real life case of murderer Ruth Snyder, a secretary whose life was dictated by others. She murdered her oppressive boss-husband in the 1920s and was ultimately executed in the electric chair. The students say the "typewriter is a symbol of her lot in life".
CORONA ON BROADWAY, 1922 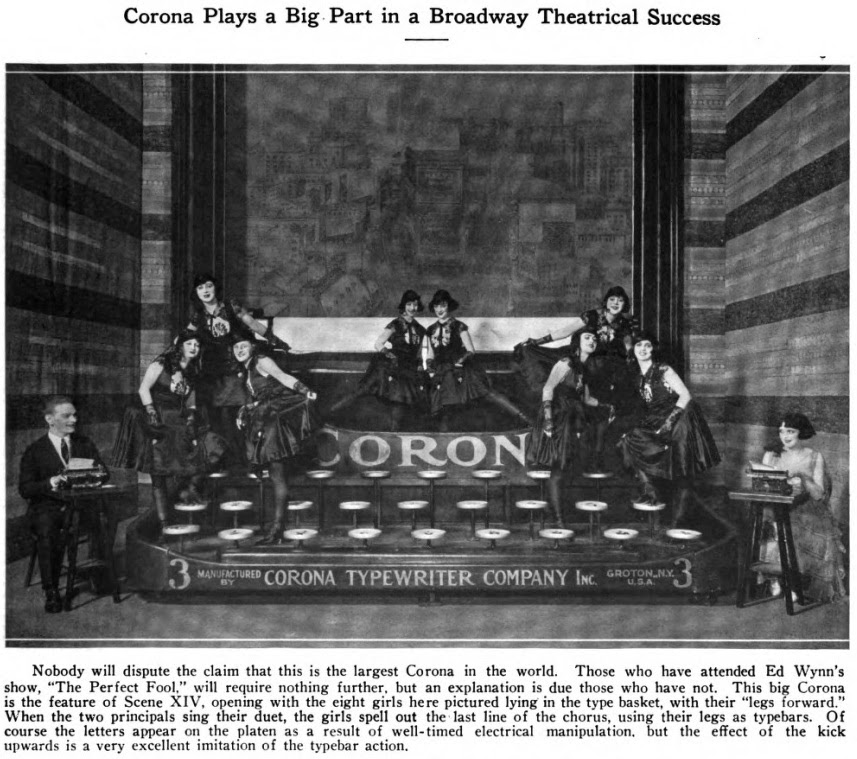 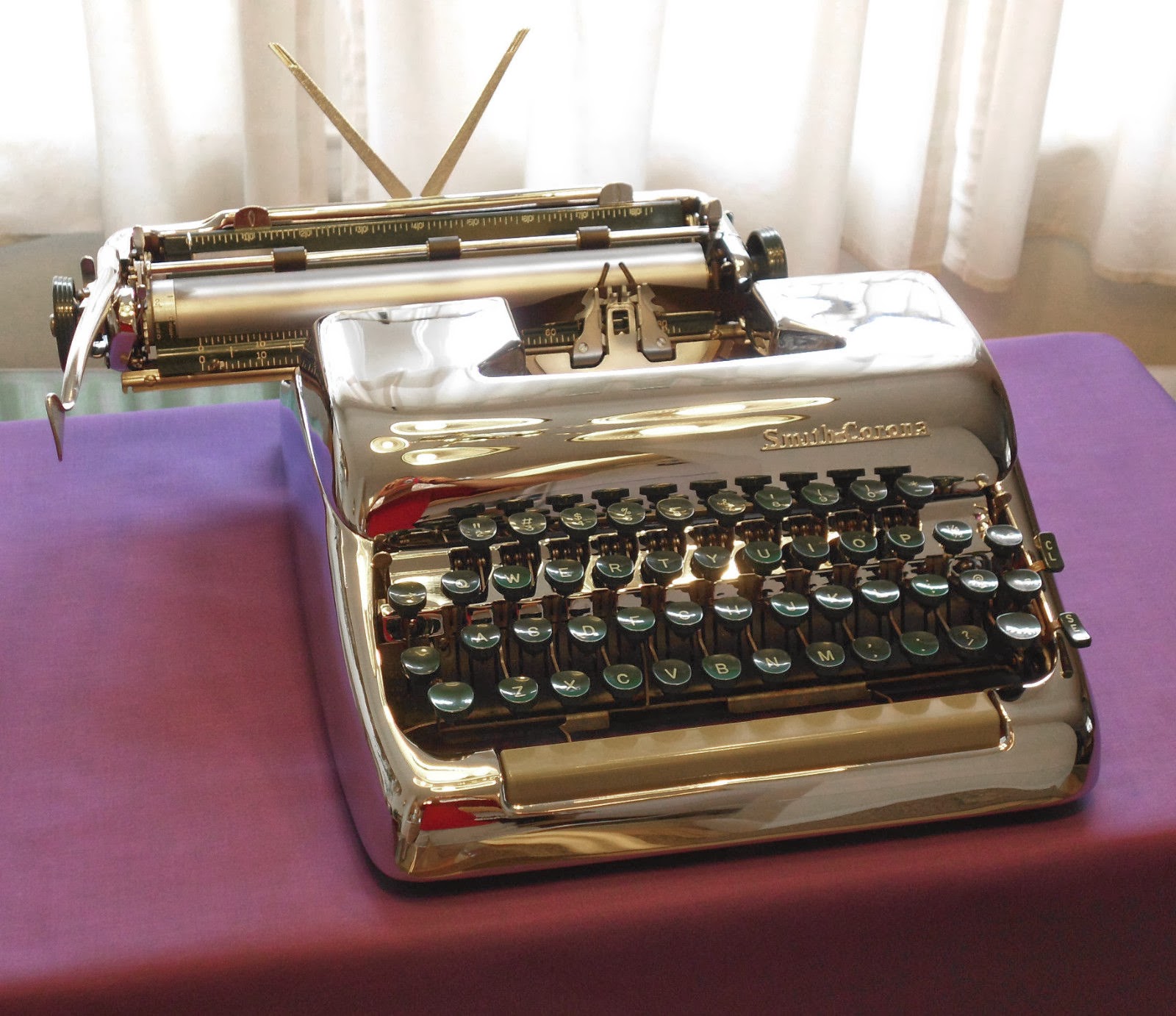 Dean Jones waxed eloquent but put a starting price of one cent on this chromed Corona. It still fetched $651 on US eBay, after 80 bids. Dean wrote at least a couple of thousand words in his listing description, but what I'd like to know is this: Is it the same chromed Corona we used to type in at Herman Price's Typewriter Collectors' Gathering at the Chestnut Ridge Typewriter Museum in Fairmont, West Virginia, last October? 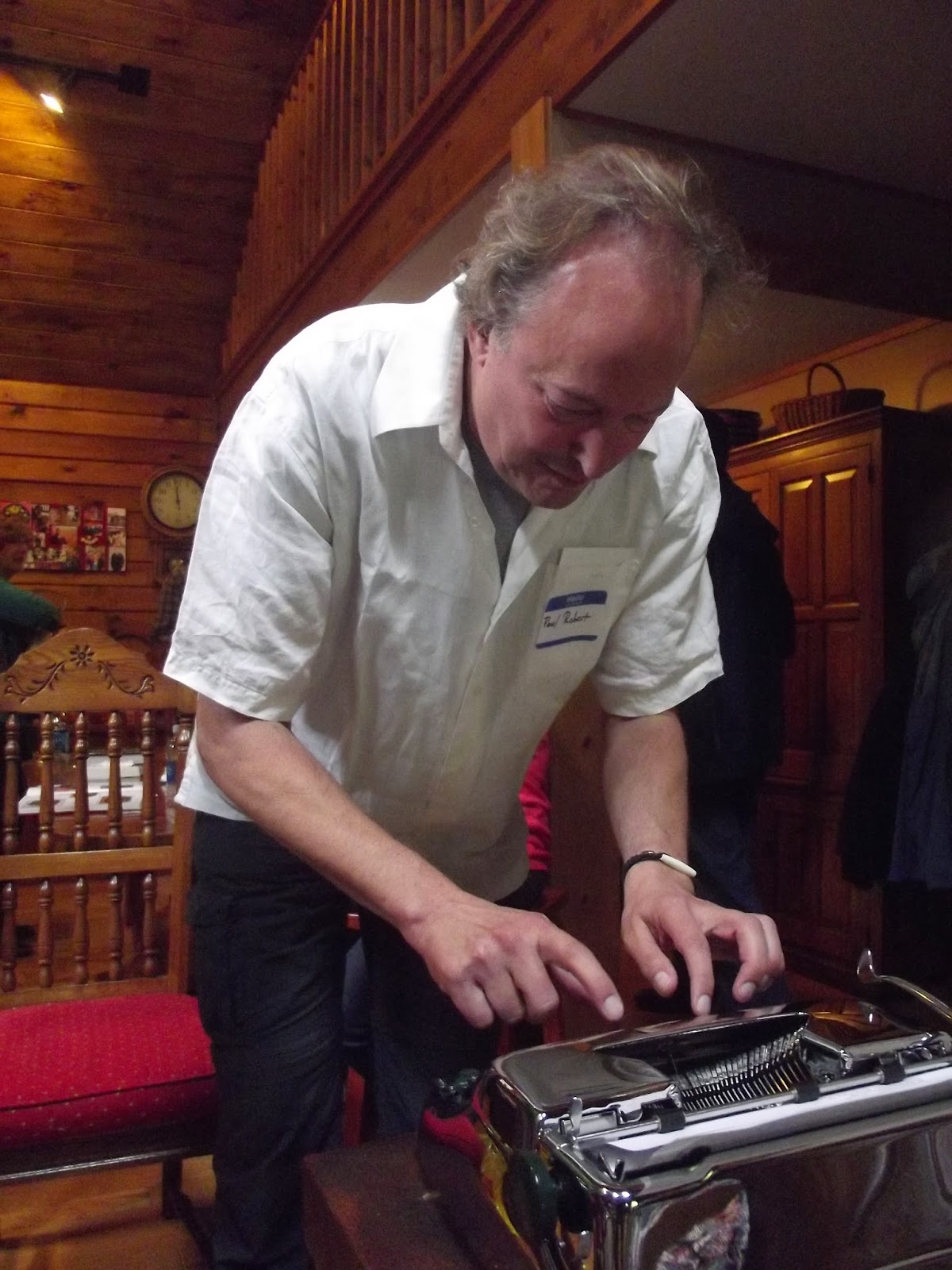 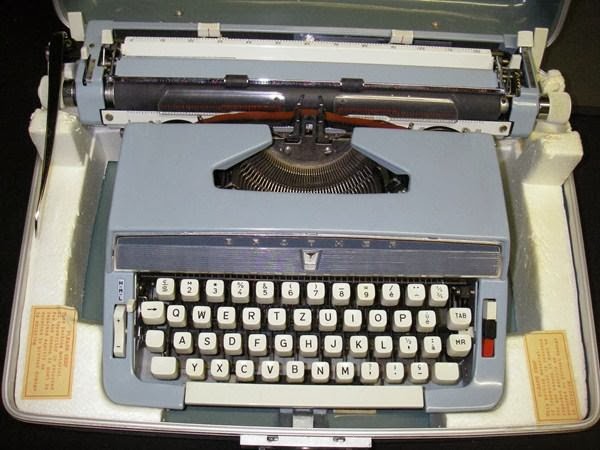 A correspondent asked me if this Brother had a model name. I only know it as a Montgomery Ward Signature (variously the 088, 510D and 513, which the Japanese label the Model S-513). 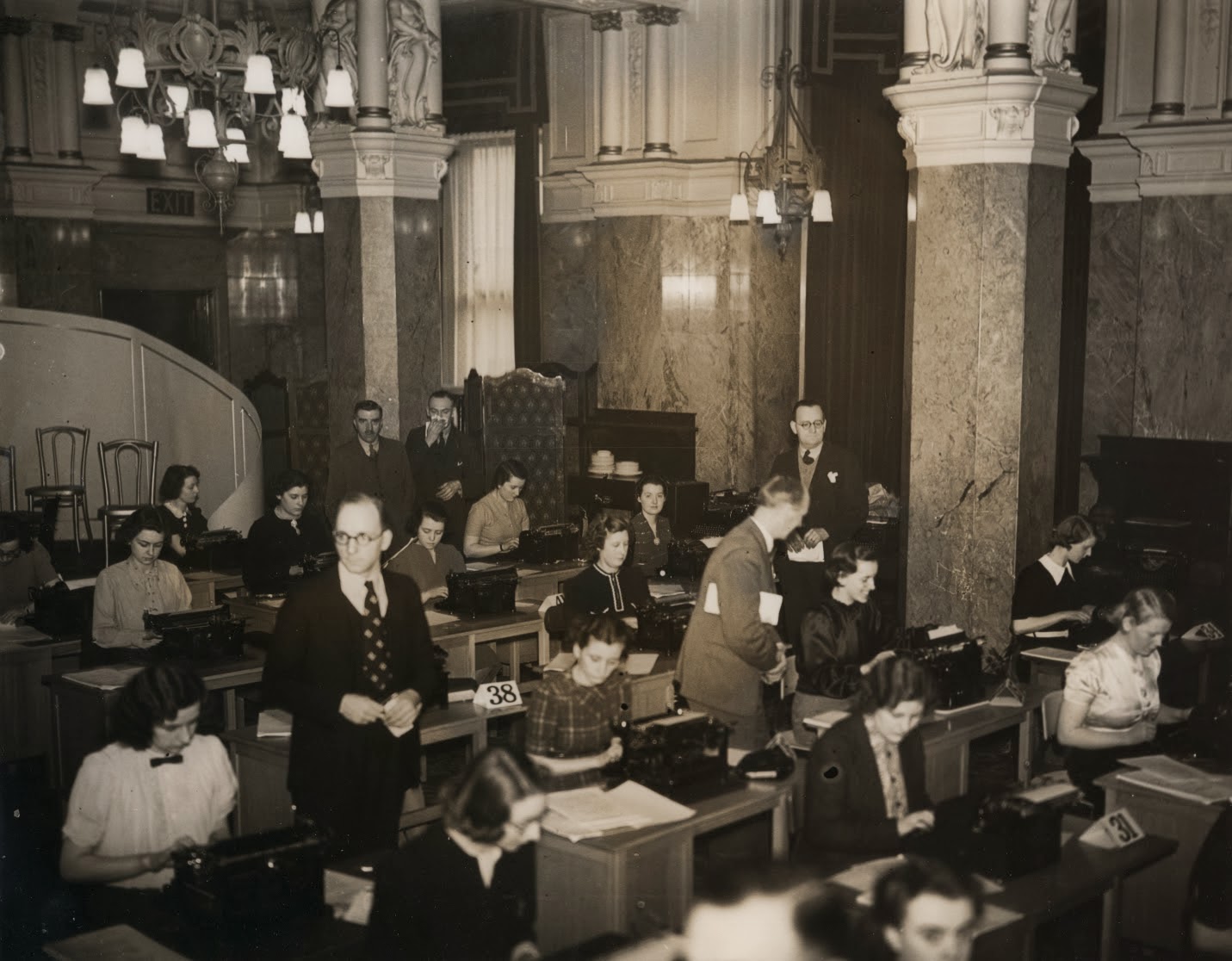 Another correspondent very kindly sent me this photo of her aunt in a typing contest in London in the early 1930s.
MISS REMINGTON IN RIO, 1911 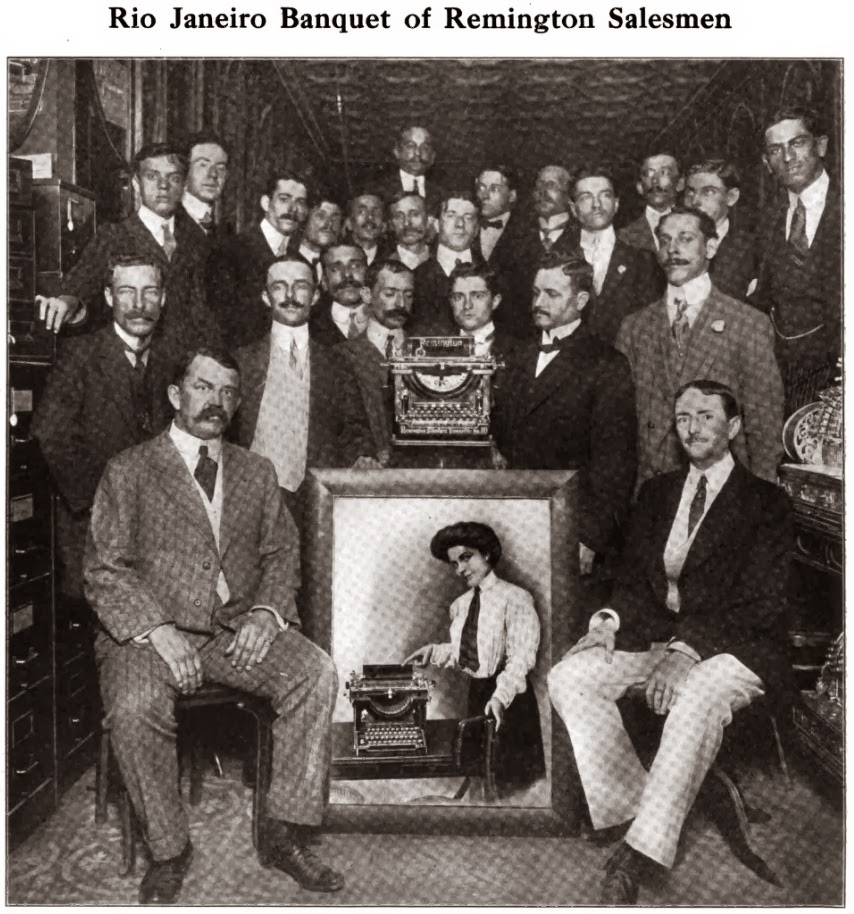 Yes, it is definitely she 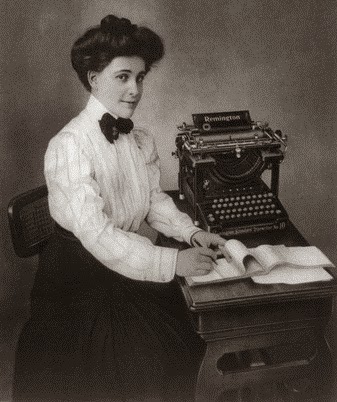 Copied by Underwood? No, this is the All-Time Miss Typewriter! 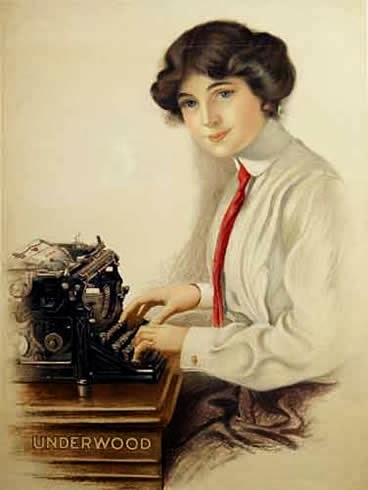 HANDS UP
Hands up the Typospherian who posed for this Underwood ad. Just curious ... 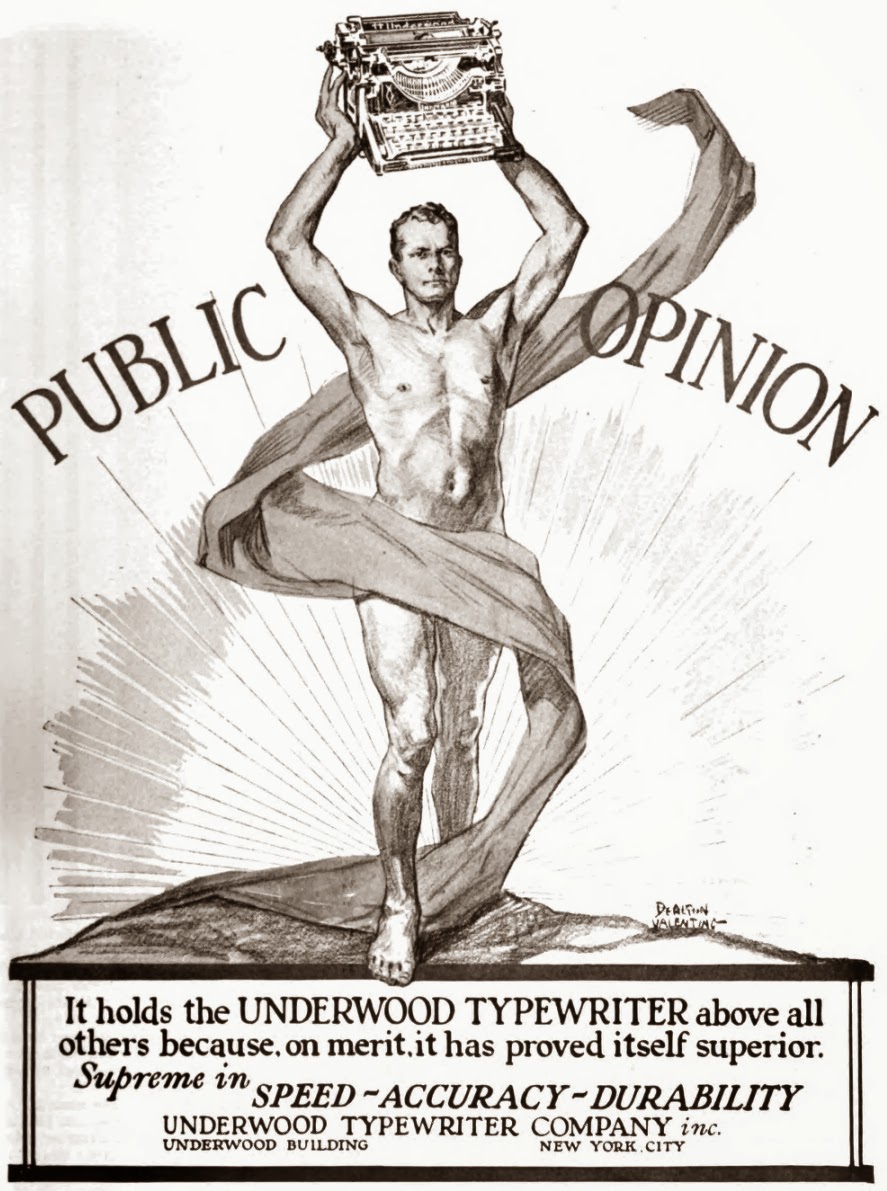 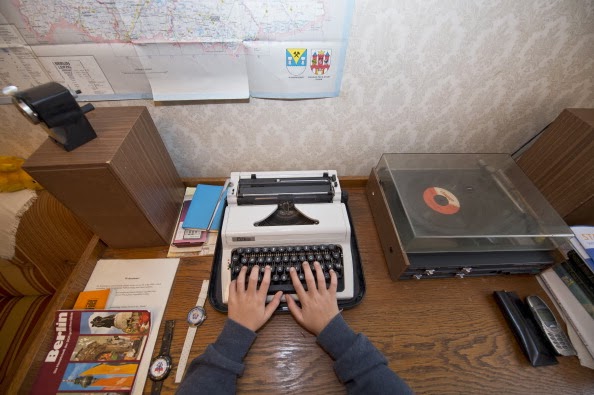 International Typewriter Appreciation Month got a mention in the Style Blog ("I Still Miss My Typewriter") of The Washington Post last week. The item began, "There’s something a little plaintive about this obscure annual observance [ITAM]. It’s a reminder of the charm (and - be honest - the frustration) we gave up to enter the computer age." The photo with the blog was taken in December 2012 of a visitor to the WBS70 Apartment Museum in Berlin's Hellersdorf district. WBS70 refers to the 70th series of concrete slab construction first used in East Germany in 1973. The apartment museum is furnished entirely with original East German fittings, including the Robotron (Erika) typewriter being used here. The museum opened in 2004 when massive renovation schemes were about to be implemented in the area. It stands as a living memorial to everyday life and design in the former East Germany. 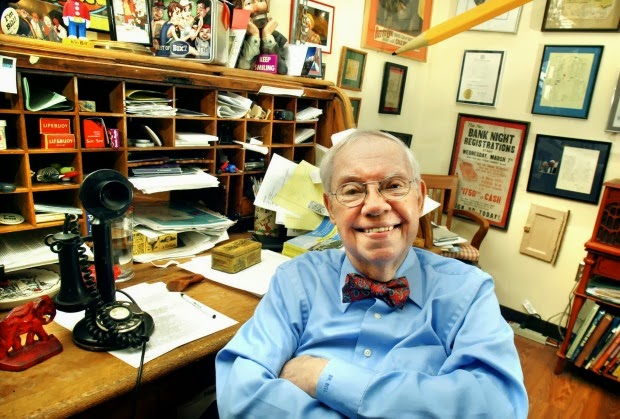 Wot? No typewriter, Bill?
Bill Wundram (above) filed a column from Engelwood, Florida, for the Quad-City Times, headed "Tales from a Battered Typewriter". "My wife was clearing the shelf of our guest room closet here in Florida. It was stuffed with blankets and faded beach towels. She called out, 'What is this?'  Hidden in a dusty corner was a flat, gray object. It was my tattered old Smith-Corona portable typewriter. It was an ecstatic moment for me. It was the one I had used, many years ago, when I was traveling almost around the world on those 'I'm With Bill' cruises that this noospaper used to sponsor. This was before email, so nightly I typed my columns in our stateroom. Helen lost sleep because the dinging bell at the end of each line kept her awake. I would take my typed copy to the radio shack on the cruise ship, where the radio operator would send it to the Quad-City Times. What tales that typewriter could tell ...". The rest of the column is here. 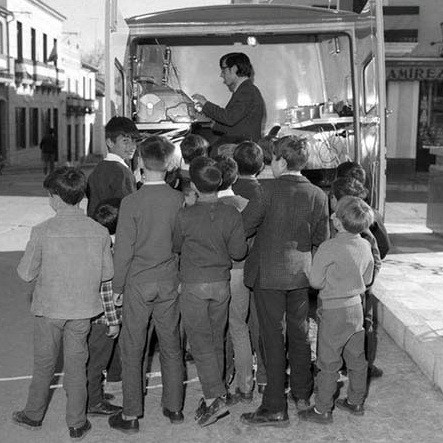 Magda Abu-Fadil, director of Media Unlimited in Lebanon, posted an interesting blog story titled "Of Telexes, Typewriters and Old-Fashioned Journalism" on the Huffington Post website. "What is it about telexes and typewriters that makes so many of us wax nostalgic?" she asked. "There's been a spate of articles lately extolling the virtues of those magnificent machines one usually sees in museums, and occasionally in people's homes or offices. I was amused when Pascal Taillandier, the editorial production manager at Agence France-Presse (AFP), posted a picture on LinkedIn of a man punching a telex tape in the back of a van as curious children looked on through the open doors. The 1969 black and white photo in the Spanish town of La Carolina was part of a series marking the 75th anniversary of Spain's EFE news agency. It took me back many years [to] when I filed stories from various capitals via telex for UPI and AFP and reminded me of the infernal noise it made." 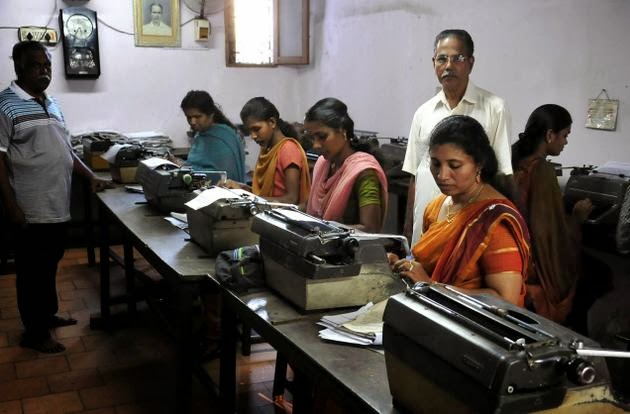 Also see "Silence of the Typewriters" at The Hindu.
'UNBROKEN' and the BROKEN TYPEWRITER 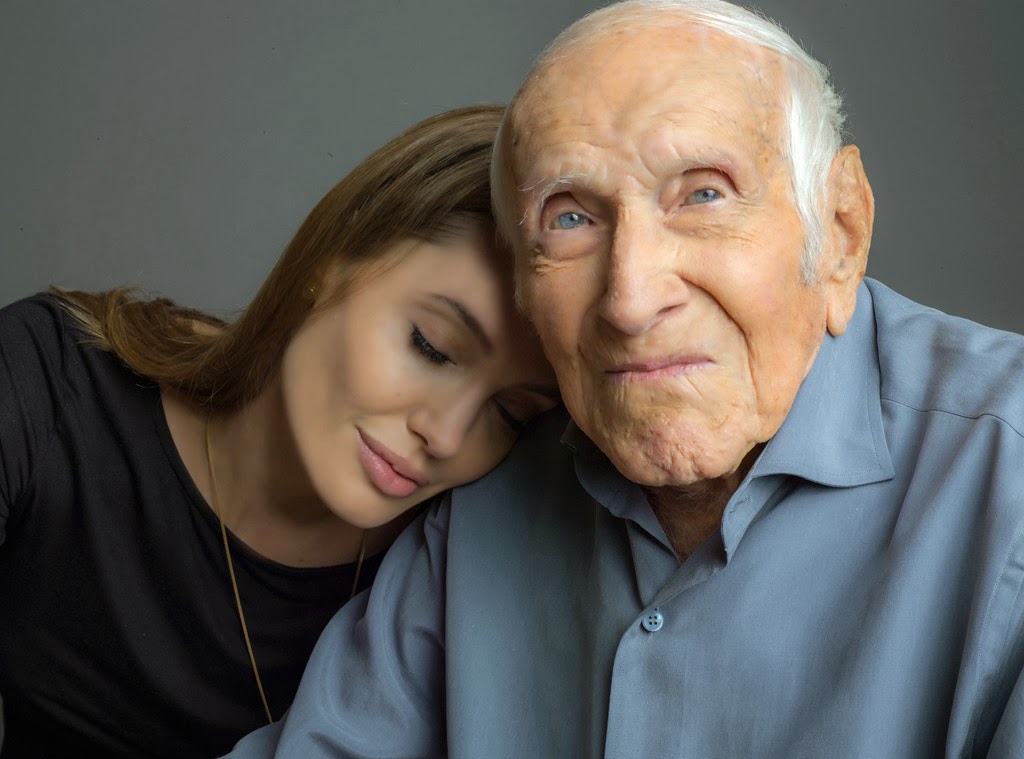 Angelina Jolie and Louis Zamperini
Angelina Jolie is wrapping up the filming in Australia of the movie Unbroken, a war drama scripted by Joel and Ethan Coen and based on the New York Times No 1 bestseller by Laura Hillenbrand (author of Seabiscuit). The movie is about Louis Zamperini, who ran for the US in the 5000 metres at the 1936 Berlin Olympic Games (he came eighth) and later became a Japanese prisoner of war. Zamperini, who turned 97 a month ago and is a near neighbour of Jolie in the Hollywood district of Los Angeles, is being played by Jack O'Connell. 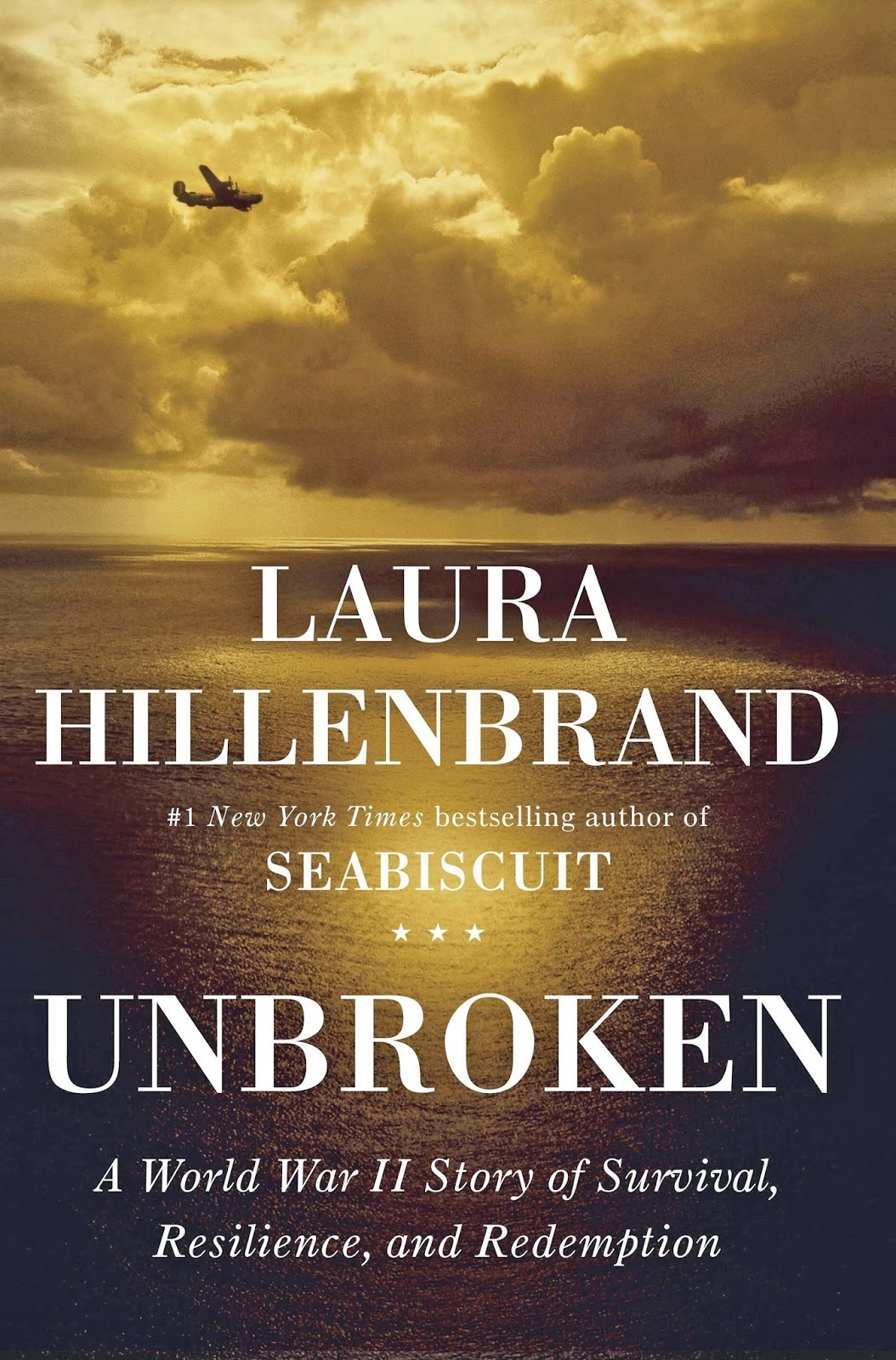 In Hillenbrand's 2010 book Unbroken: A World War II Story of Survival, Resilience, and Redemption, the author describes the scene after the Japanese bombing of a tiny Pacific island. 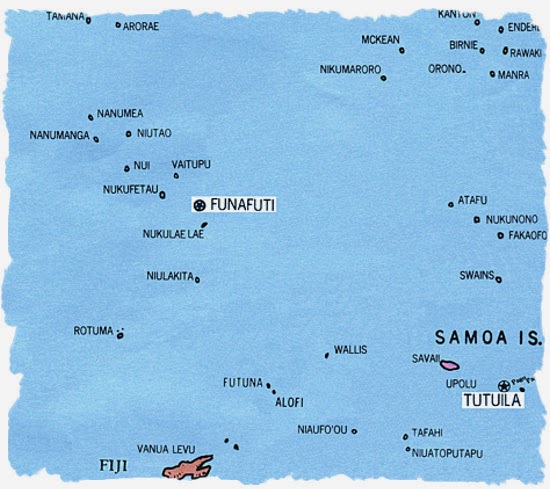 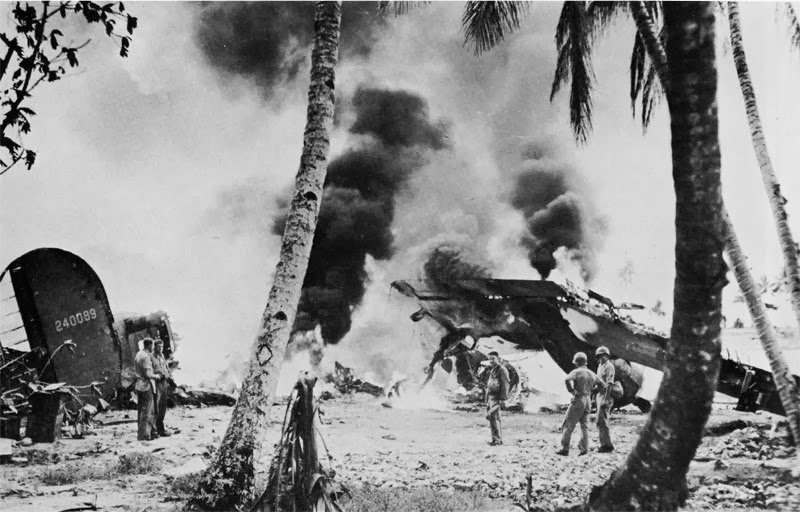 "Funafuti [where Zamperini was a bombardier on a B-24 Liberator bomber] was wrecked. A bomb had struck the church roof,s ending the building down onto itself, but thanks to Corporal Ladd, there had been no one inside. There was a crater where Louie and Phil’s tent had been. Another tent lay collapsed, a bomb standing on its nose in the middle of it. Someone tied the bomb to a truck, dragged it to the beach, and turned sharply, sending the bomb skidding into the ocean. Rosynek walked up the runway and found six Japanese bombs lying in a neat row. The bombs were armed by spinning as they fell, but whoever had dropped them had come in too low, not leaving the bombs enough drop space to arm themselves. The men dragged them into the ocean too. Where the struck B-24s had been, there were deep holes ringed by decapitated coconut trees. One crater, Louie [Zamperini] noted in his diary, was 35-feet deep and 60 feet across. Bits of bomber were sprinkled everywhere. Landing gear and seats that had seen the sunset from one side of Funafuti greeted the sunrise from the other. All that was left of one bomber was a tail, two wingtips, and two propellers,connected by a black smudge. There was a 1200-horsepower Pratt and Whitney engine sitting by itself on the runway; the plane that it belonged to was nowhere to be found.
"Louie came upon a reporter staring into a crater, in tears. Louie walked to him, bracing to see a dead body. Instead, he saw a typewriter, flattened." 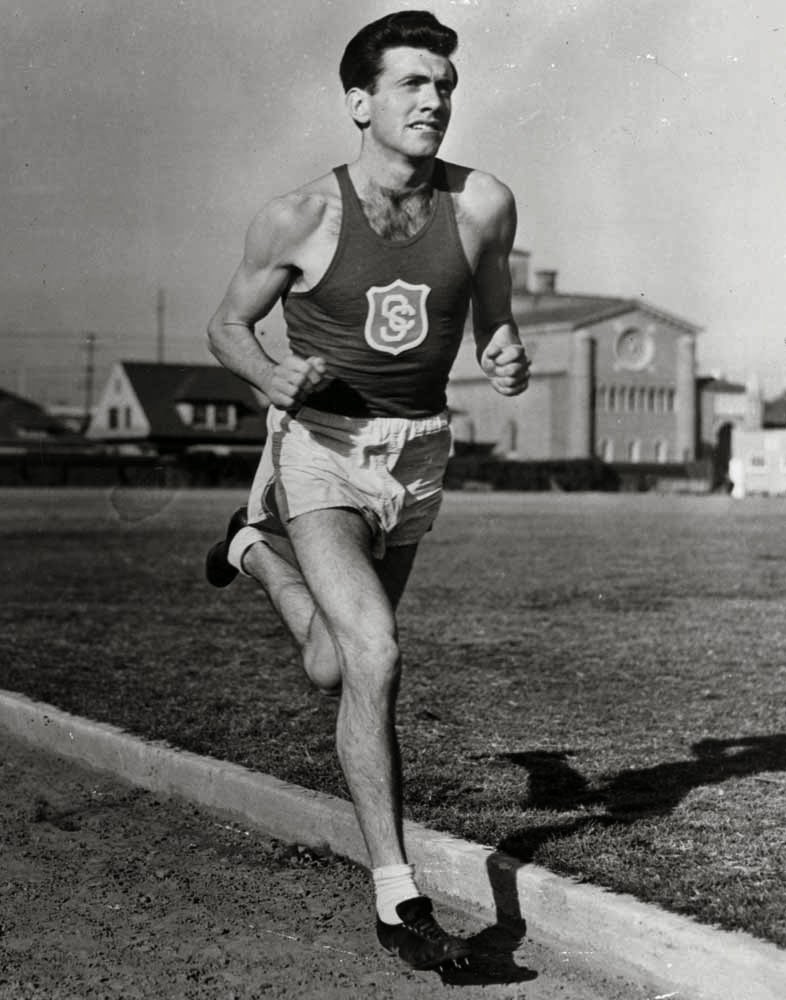 Zamperini survived a plane crash in the Pacific Ocean 850 miles west of Oahu, spent 47 days drifting on a raft, reached the Marshall Islands and was immediately captured by the Japanese Navy. He was then held for more than 2 1/2 years in several brutal Japanese internment camps.
BRISBANE TYPE-IN 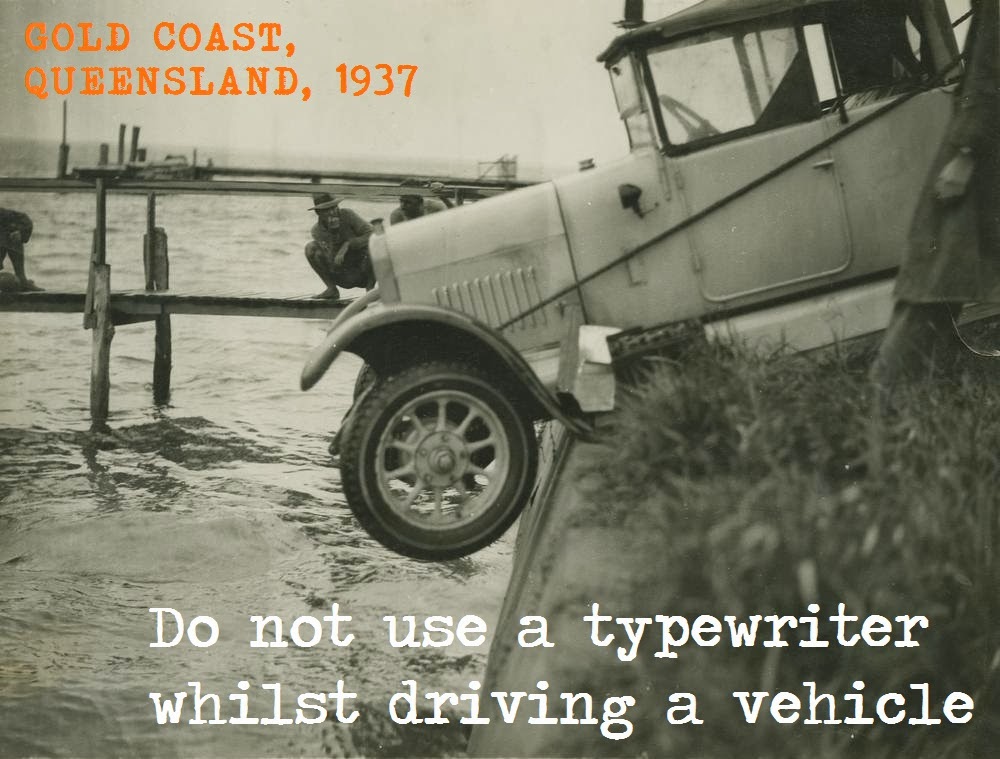 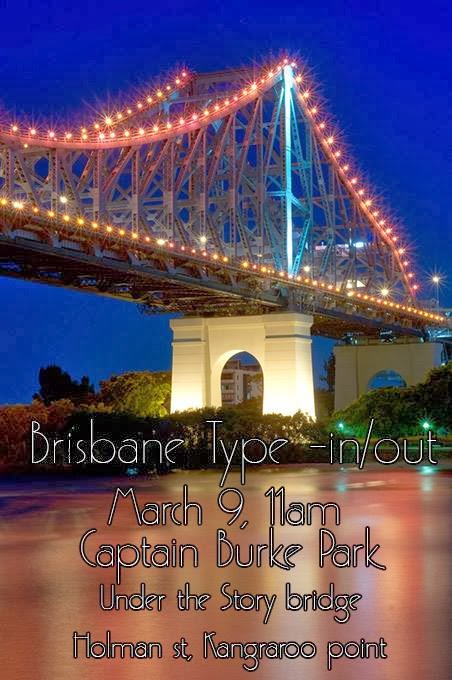 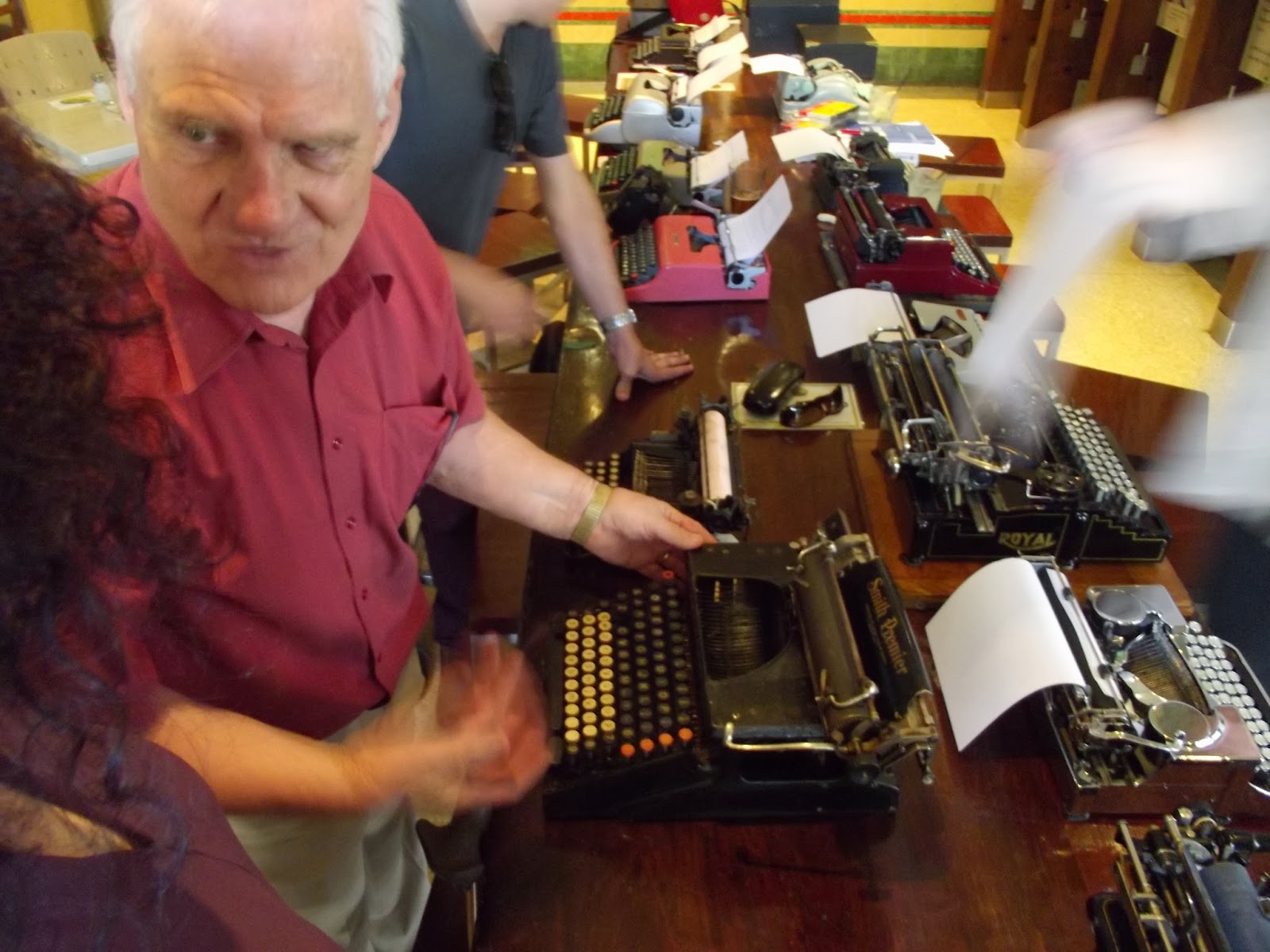 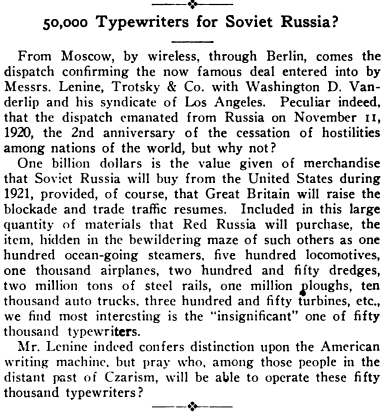 FROM RUSSIA WITH LOVE
I think it was my first comment in Russian. In case anyone was wondering about it, it came from Irina Semiletova and was about a post some weeks ago on two Americans caught spying in England for Russia. Irina said, "No country is without spies ... Another thing - to recognise the truth or ignore it. Thanks for the story! All this is sad: born in US, to live a double life in the United Kingdom, and instead of their own island, like Somerset Maugham, not to end up in the most comfortable country."

GRANDFATHERHOOD
I became a grandfather for the first time this week when Isaac was born in Bristol, England, to my son Simon and his partner Nicola. 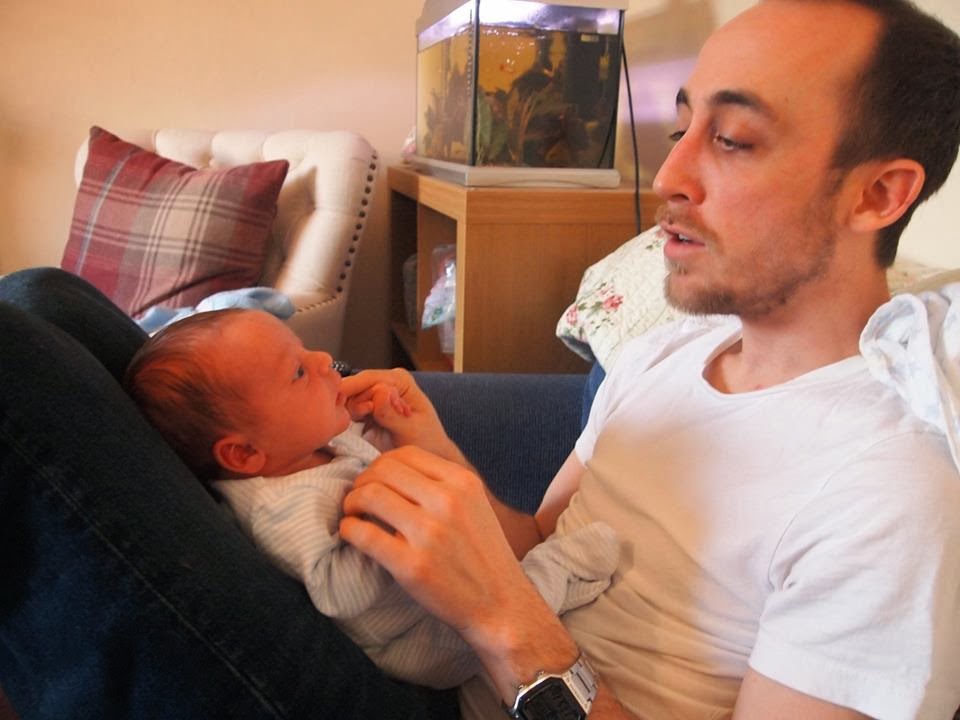 Posted by Robert Messenger at 23:42

It is possible, though unlikely, that the chrome typewriter which you mention here is the exact same one you had previously seen and used at the convention. Dean rebuilds and sells them fairly often on eBay. I've seen several he's had available over the last few months, including an interesting gold-plated one. Very nice! I keep hoping one day I'll catch one I can actually afford!

Love that giant 1922 Corona! I'd never seen it before. Of course the idea was used more elaborately in the musical "Ready, Willing, and Able."

I will miss these monthly roundups.

Hey! Congratulations Robert to you and your family. Great to hear.

Grandfatherhood is a good thing - congratulations.

I, too, will miss the Monthly Roundup. As always, this one opened up gates for new exploration for me, introduced me to interesting people, and tempted me with two books to add to my Kindle.

Happy birthday, and happy grandfatherhood! Why stop? Your fan & friend from Switzerland

Why is this your last monthly update? Are you ending your blog?

Congratulations Grandpa!! As much as some of us consider our typewriters as our children, the real thing is so much more important!
Even if you cut back, we hope you'll check in once in a while!
We love you !!

Congratulations on your blog and your family! Great mileposts. I'm sure Grandfathering will replace quite a bit of blogging. Much better rewards too.