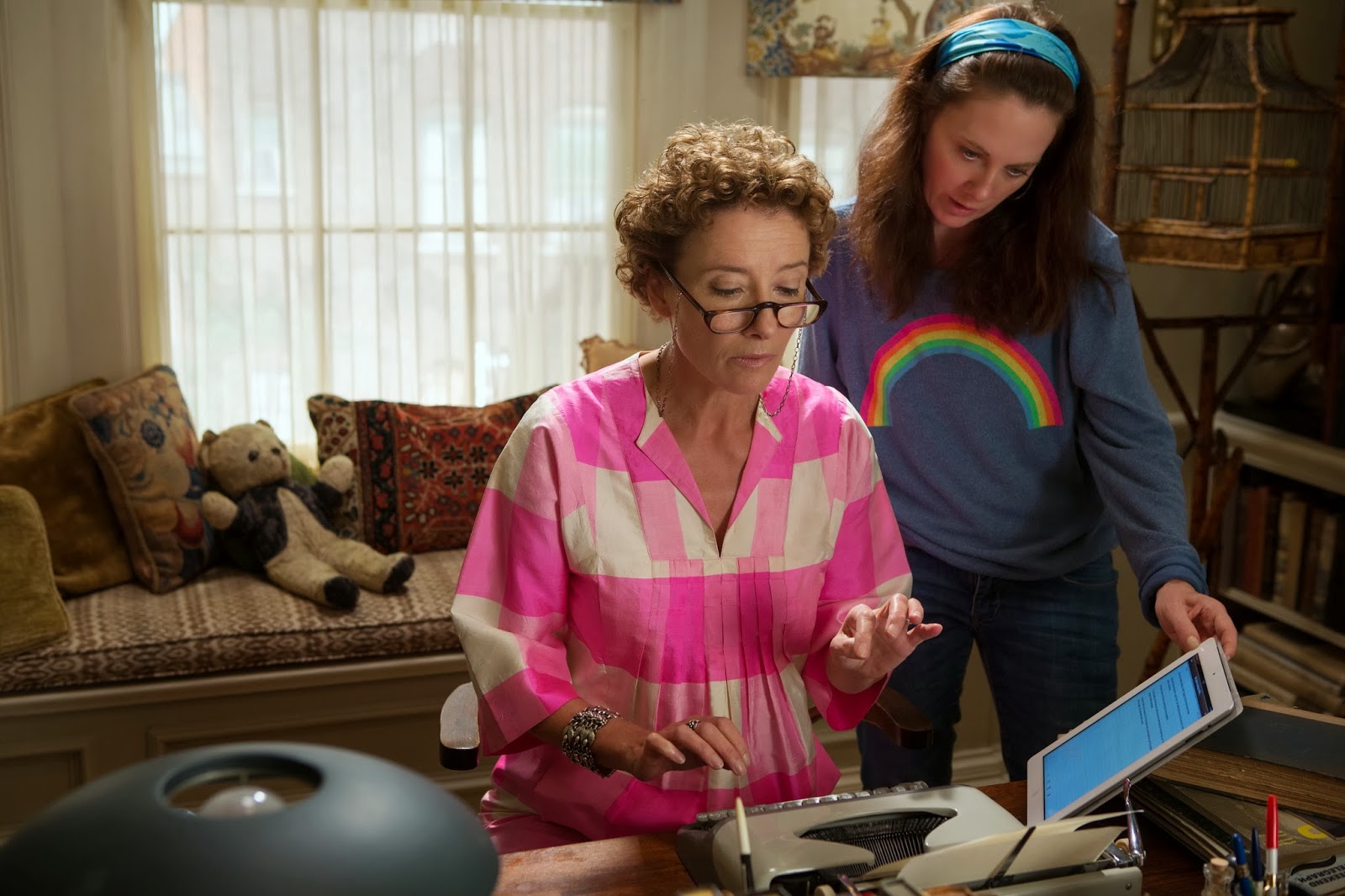 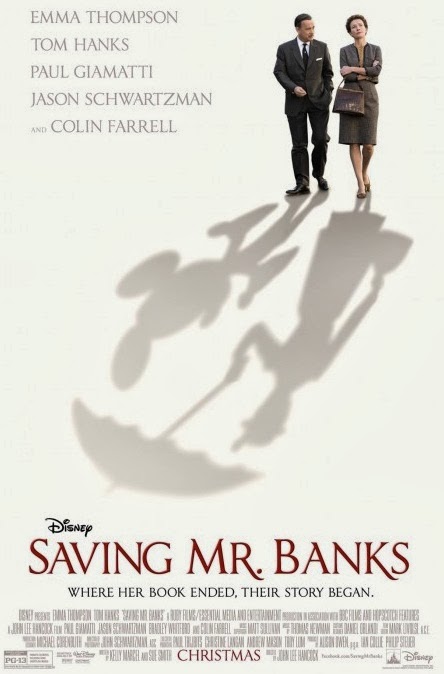 Some loyal followers of this blog may (vaguely) recall that on my Queensland odyssey (almost a year ago now) I went to Maryborough, where Helen Lyndon Goff, better known as Mary Poppins creator P.L. (Pamela Lyndon) Travers, was born in 1899. While there, I photographed the little statute dedicated to Lyndon Goff and Mary Poppins on a side street of the old town. 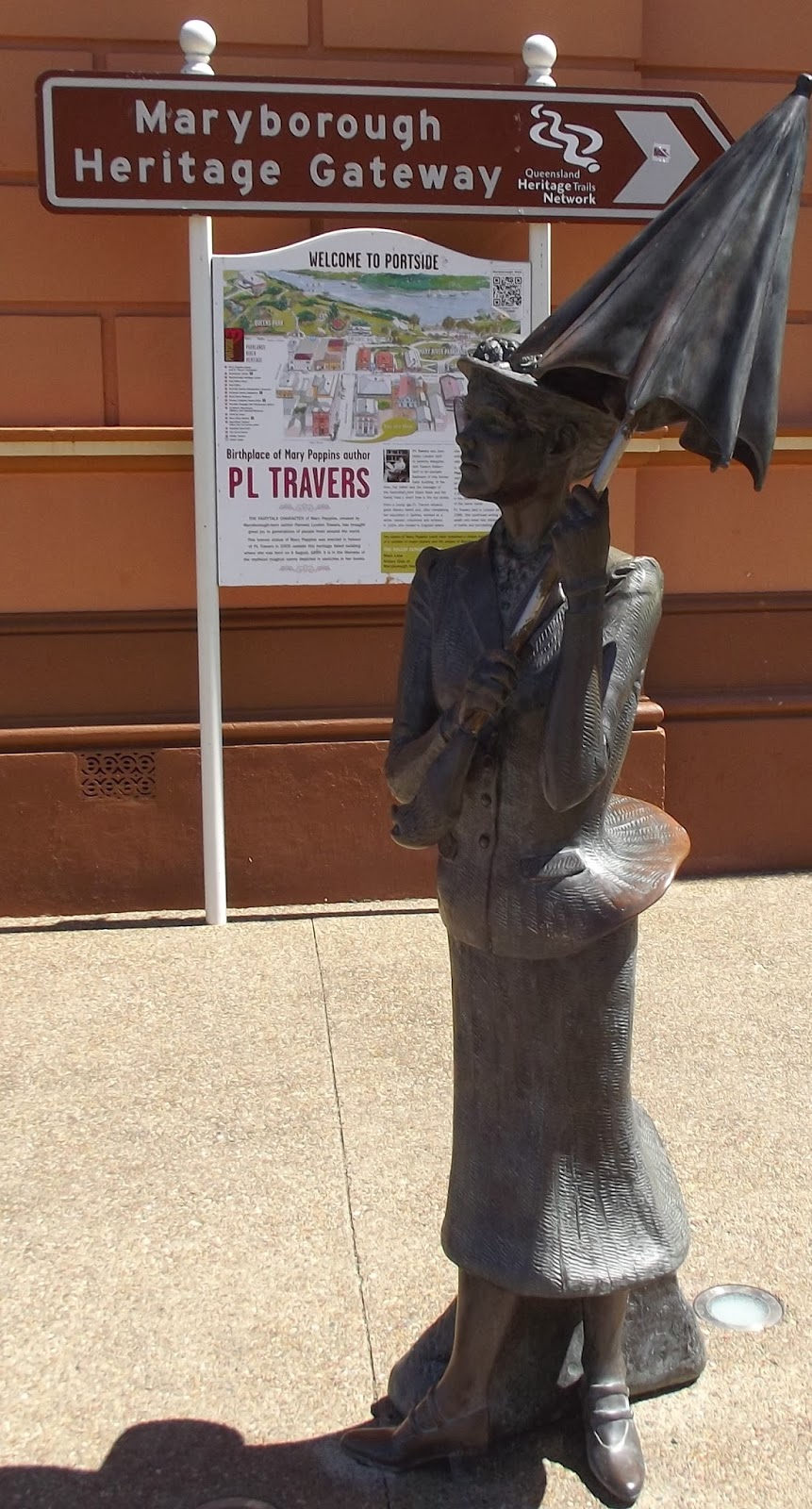 At the time of that typecast (on a maroon Princess portable) and post, many commented that they had been unaware the Mary Poppins creator was Australian. They shouldn't have felt any sense of guilt about that: Lyndon Goff herself had kept her Australian origins very much a secret for many a good year.
Lyndon Goff's writing career actually started in New Zealand, when she was there with the Alan Wilkie Shakespearean Touring Company in the early 1920s. She fell passionately in love with a journalist and began writing poetry. Her lover's intervention led to a column called "Pamela Passes" in the Christchurch Sun which persisted even after her return to Sydney, where she also wrote freelance pieces, including poetry, for The Bulletin. 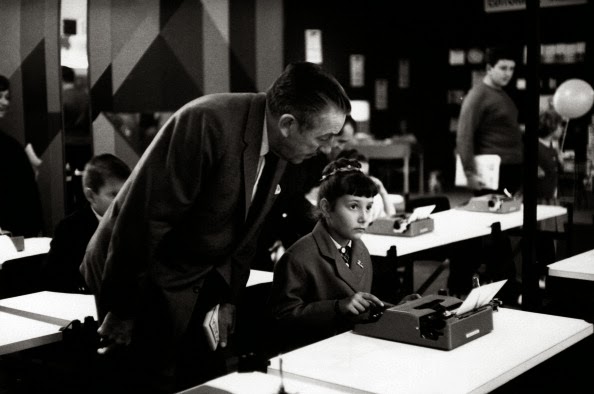 In September 1965, 13 months after the release of the Mary Poppins movie, Walt Disney visited a "Children's Fair" in Milan and watched this rather startled young Italian schoolgirl typing on an Olivetti Lettera 32 portable typewriter.
Toward the end of the excellent film Saving Mr Banks, there is a rather hurting line, in which Lyndon Goff's true identity is finally revealed to Mary Poppins movie maker Walt Disney (played by typewriter lover Tom Hanks). I can't recall it word for word, but it's basically that "She's not a toffee-nosed Englishwoman, after all, she's just a plain old Aussie!"
It's highly unlikely a secretary working at the Disney studios would have used the word "Aussie" in 1961 and it's even more unlikely that Lyndon Goff (or Pamela Travers) would have used a Czechoslovakian-made Consul 232 portable typewriter in London that same year. 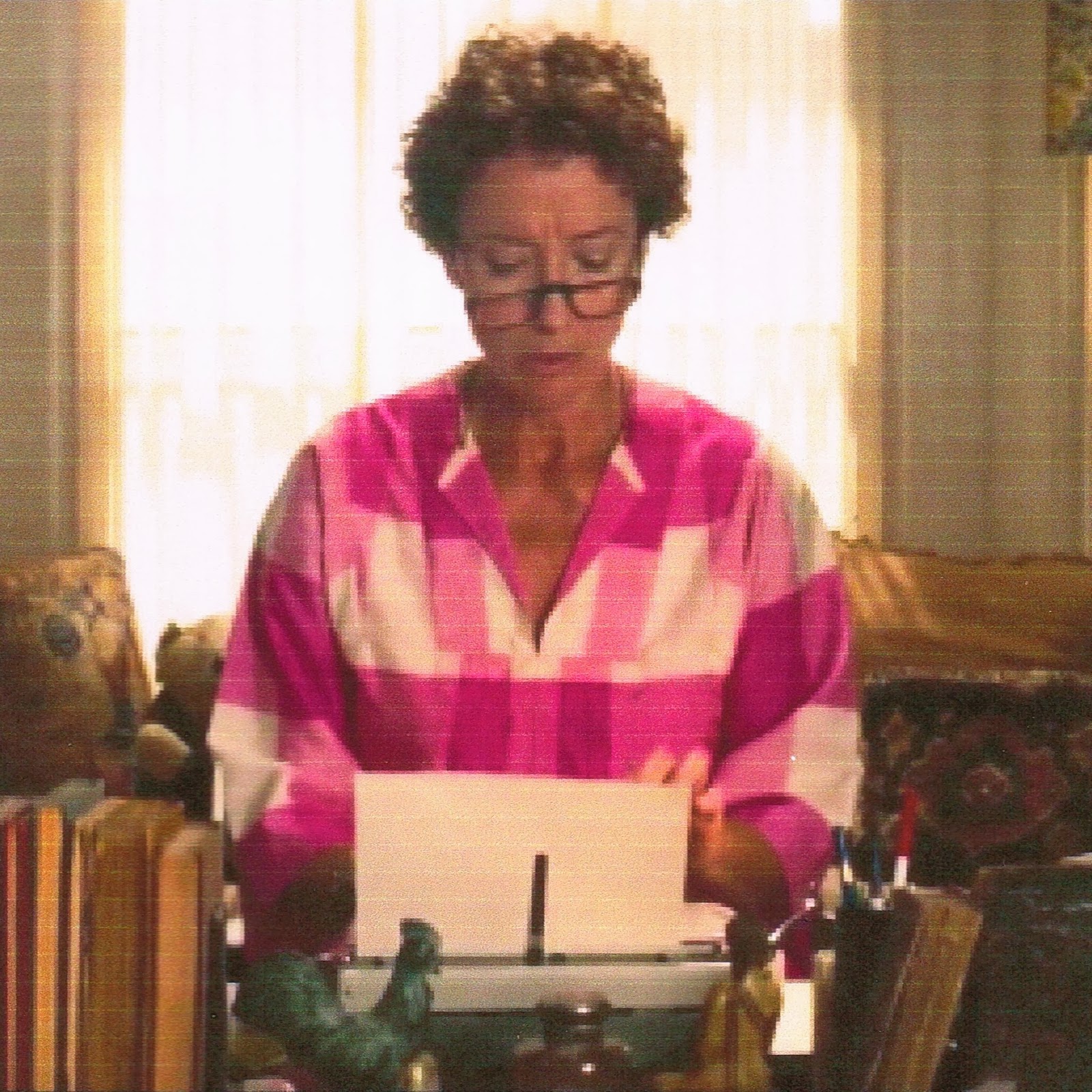 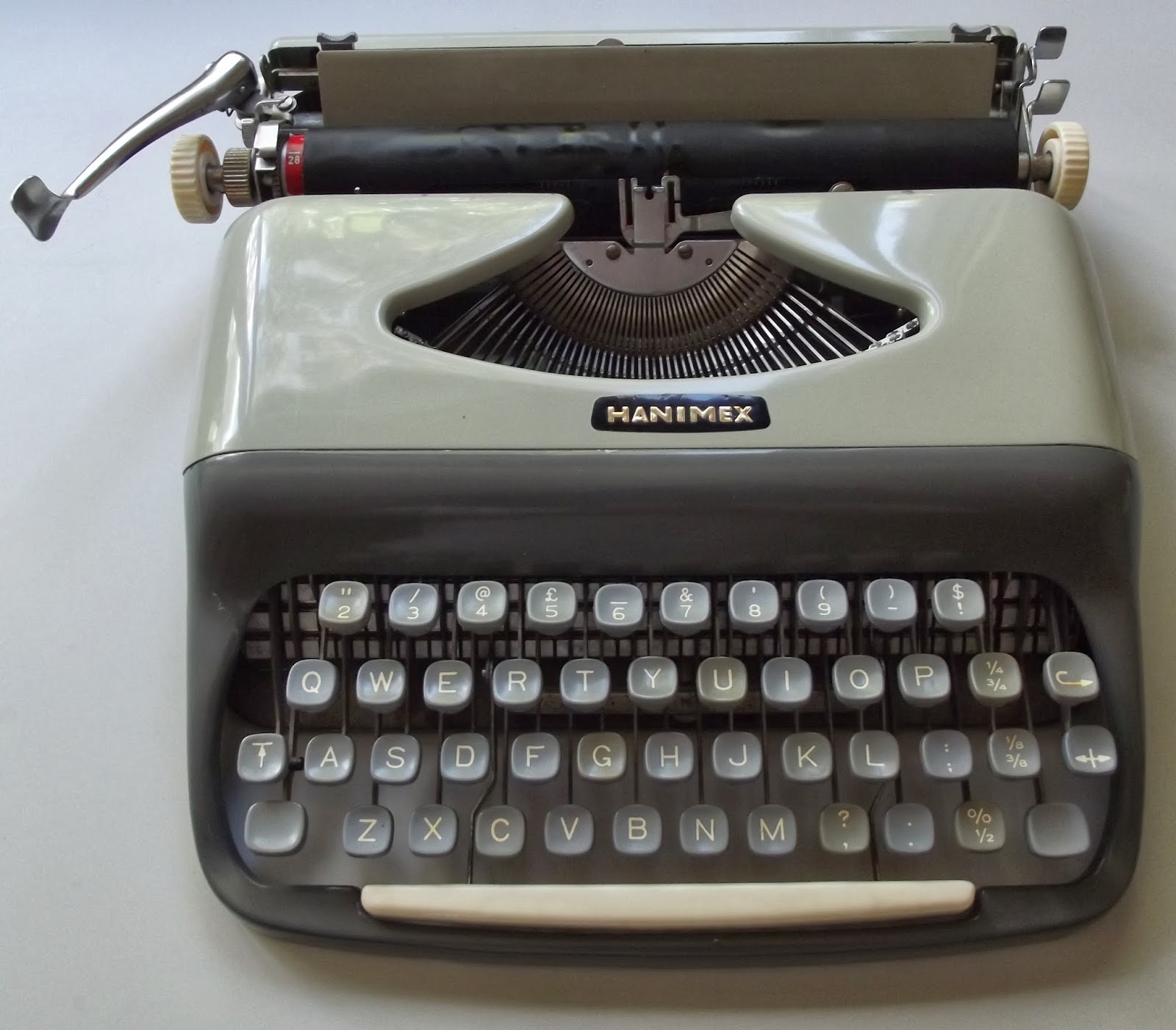 The same model as English actress Emma Thompson uses in her role as P.L.Travers in Saving Mr Banks, the Consul 232, is most commonly known in Australia as the Hanimex (it was also sold as the Highness). Below is the same model as a Consul.
One famous Australian writer who did use a Consul (although it was labelled an Optima) was Nobel Prize winner Patrick White (Voss). 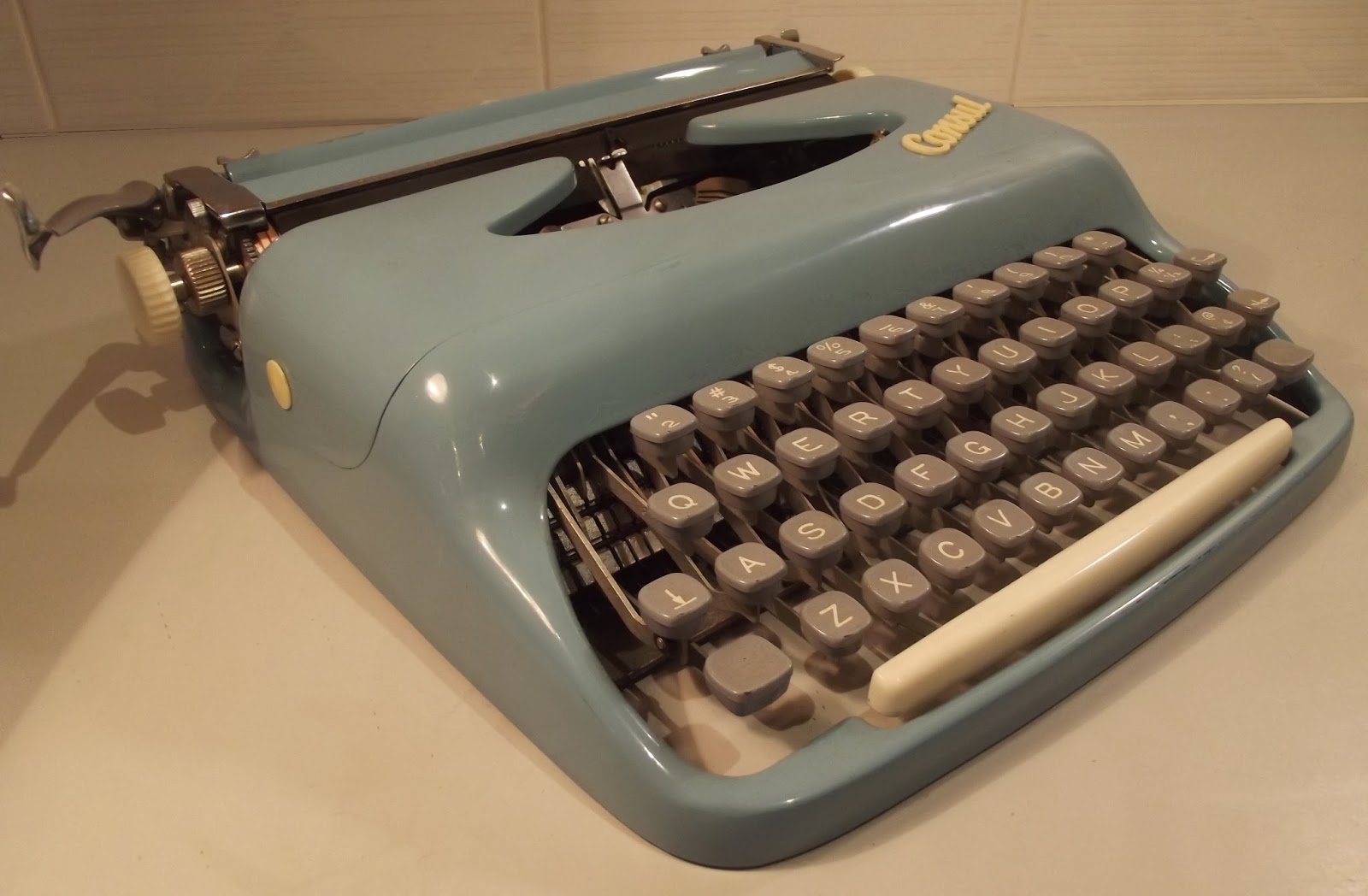 Nonetheless, I am quite happy to forgive Disney this small oversight in the making of Saving Mr Banks, because in browsing through a Consul 232 manual, I came across the image below. It is very clear from it that the Czech manufacturers, Zbrojovka Brno, believed that, one day, a Mary Poppins film character would be seen using a Consul 232: 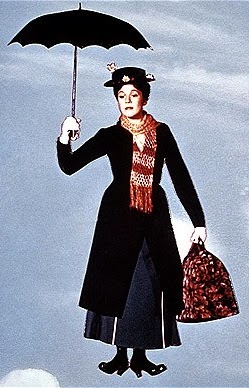 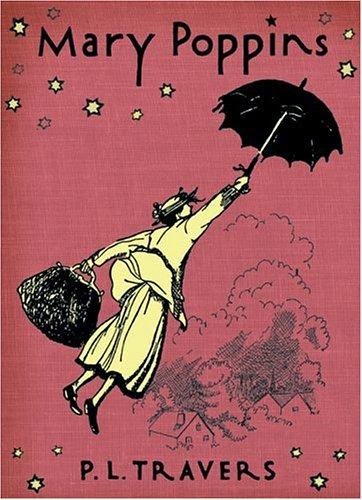 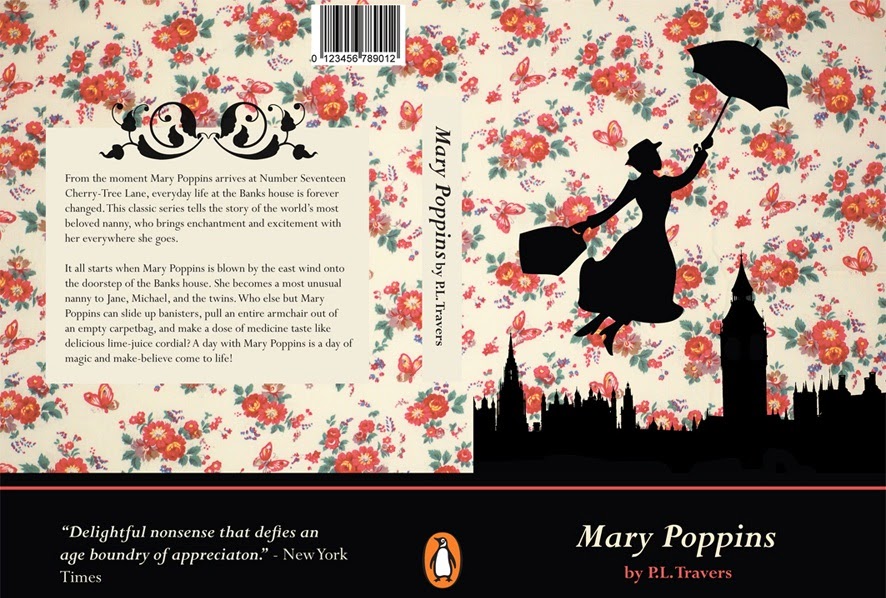 If that Consul image wasn't inspired by Mary Poppins, I'll go jump in the Vltava River. The woman in the Consul photo even looks like Lyndon Goff!: 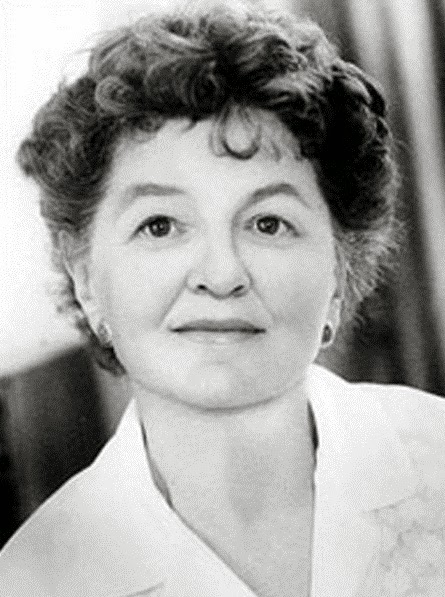 What I can't forgive Disney, or any movie studio, is the often ludicrous claim that a film is "based on an untold true story". Saving Mr Banks is not accurate, and the true story about all this has often been told. Still, having seen the movie last night, I would thoroughly recommend it, for the performances of Thompson and Hanks alone. My favourite part of the movie, however, is the startling appearance of that utterly sublime Australian actress Rachel Griffiths, who plays the young Lyndon Goff's great aunt, Ellie Morehead, the real inspiration for Mary Poppins. 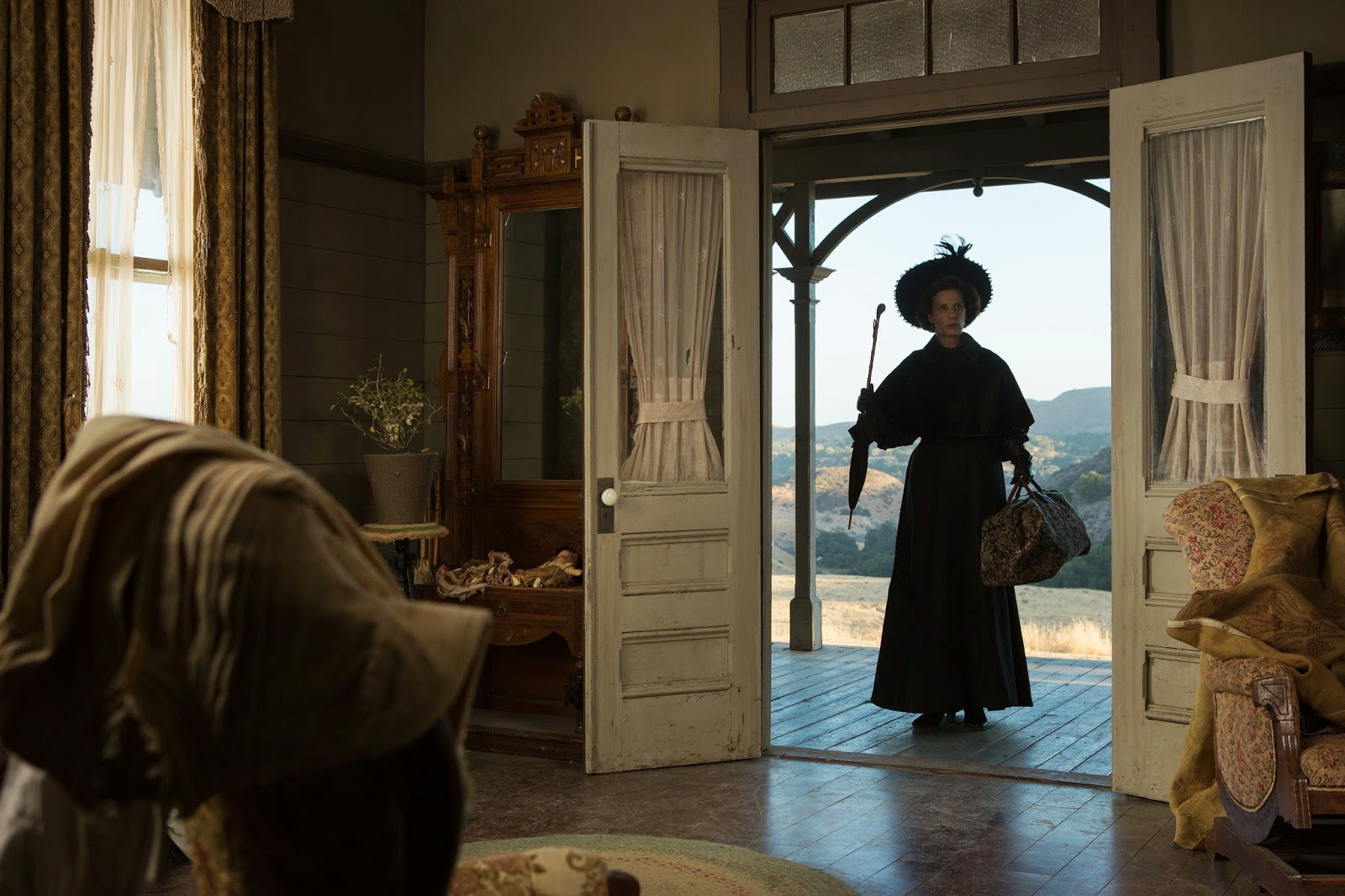 Griffiths, a natural scene stealer, suddenly arrives as a foreboding, umbrella-wielding figure on the doorstep of the Goff family homestead in rural Queensland to "save Mr Banks" (that is, Lyndon Goff's dying father, English-born Travers Robert Goff). I'd cross burning coals to watch Griffiths act.
Now ... for a really true, previously untold story:
There is a connection, albeit tenuous, between Mary Poppins creator Lyndon Goff (Pamela Travers) and the great English writer, D.H.Lawrence. In 1922 Lawrence lived in the New South Wales South Coast town of Thirroul, where his Australian experiences led to him writing a novel called Kangaroo.
This book, much closer to the truth than most Australians cared to believe, was largely about the Fascist movement in this country, the New Guard. 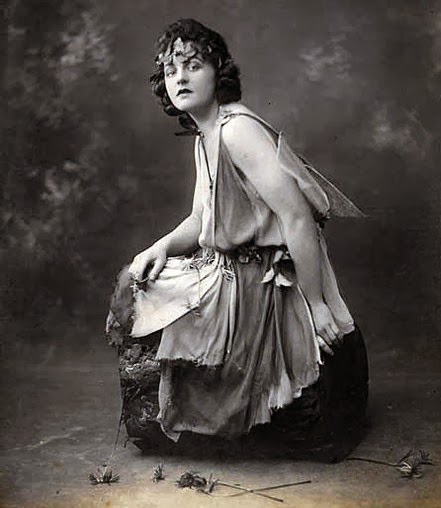 At that time, Lawrence was living not all that far from where Lyndon Goff (Pamela Travers) had grown up, in Bowral, where Lyndon and her mother and sisters had moved after her father died (in 1907). Lyndon remained in Bowral until 1917. After touring Australia and New Zealand with the Wilkie Shakespearean company (see photo above), she left for England in 1924, and subsequently had very little to do with her two sisters, Biddy and Cicely Margaret (Moya), back in Australia. 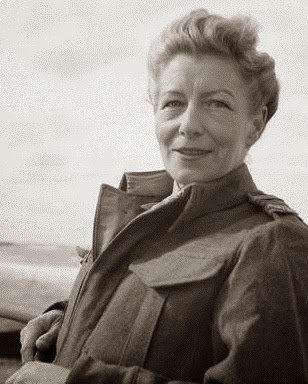 One of those sisters was Barbara Ierne (Biddy) Moriarty, above, played in Saving Mr Banks by Lily Bigham.  On Boxing Day 1927, Biddy married Orpen Boyd Moriarty, a Fascist and a member of Eric Campbell's paramilitary New Guard.
Six degrees of separation, you say. What I find amazing is that Biddy has an entry in the Dictionary of Australian Biography, but staggeringly this does not even mention her sister was Lyndon Goff (who, just as amazingly, does not have an entry). Nor does Biddy's entry mention that Boyd Moriarty was a member of the New Guard!
Since 1925 Campbell had been active in paramilitary activity with Major William John Rendell Scott, who in 1922 had met Lawrence and became the main character, Jack Callcott, in Kangaroo.
Mary Poppins and the Fascists ... now there's a story! 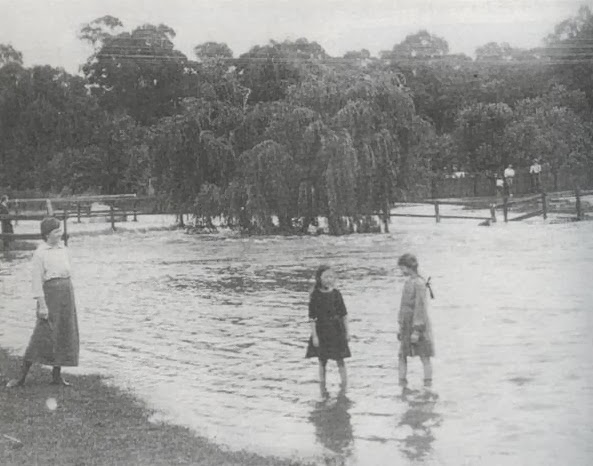 The three Goff sisters – Lyndon, Moya and Biddy – in 1915 beside the flooding creek near their Holly Street home in Bowral.

Posted by Robert Messenger at 15:32

Very entertaining post, Rob. So the Consul manual predates the 1964 Mary Poppins movie? It is uncanny!

Entertaining to say the least. Fine post on a movie I was not going to watch. Now I need to find the DVD as the local movie house has a crappy sound system that is only good for testing hearing protection with projection that is fine for those who can see through out of focus images.

I wonder if the typewriter choice was by the prop master or Tom Hanks as he may know of the same Consul ad.