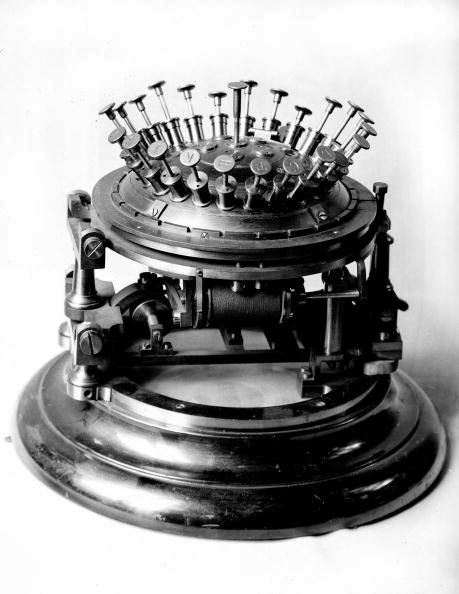 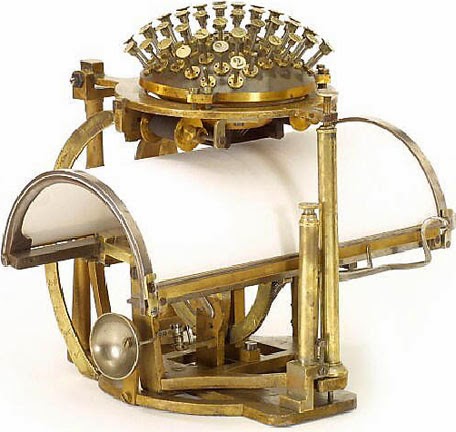 It took me a while to confirm this, but eventually I came across a most informative page on the Malling-Hansen Society's website, written by Niels O.Faurholt, who has a special interest in old cryptological systems and instruments. 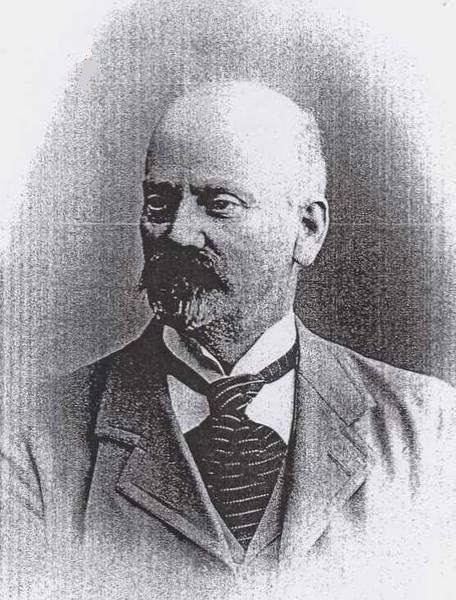 Alexis Køhl (1846-1920)
What remained a mystery is that the photograph above, taken at the Paris Conservatoire National des Arts et Métiers, and described as being of an "Automatic cryptographer (system Alexis Køhl)",  is dated from 1923, but I also found two references, including Archivportal Thüringen, to the "Alexis Køhl Système cryptographique" from 1876.

1882  article
But one website does say a Køhl system "hand cryptotrahic" machine was manufactured by Det Store Nordiske Telegrafselskab in Copenhagen and was "used in the Foreign Ministry during the 1920s ... Invented in Stockholm by the civil engineer Alexis Køhl for secret writing."

Det Store Nordiske Telegrafselskab is today GN Store Nord A/S, a Danish manufacturer of headset and hearing instruments and audiological diagnostics equipment. It was founded as the Great Northern Telegraph Company (Det Store Nordiske Telegrafselskab A/S) in Denmark in June 1869. It was set up as a merger of three telegraph companies, initiated by Carl Frederik Tietgen. The aim of the firm was to create a worldwide telegraph company. 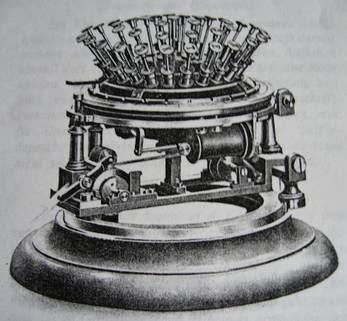 From the Malling-Hansen Society website
Niels Faurholt also describes a Køhl “non-writing” cryptograph, designed for use as a pocket model.  "We know of one  'non-writing' cryptograph, whereas the writing ball version itself probably does not exist.  However, we have Køhl’s original instructions for use of it." 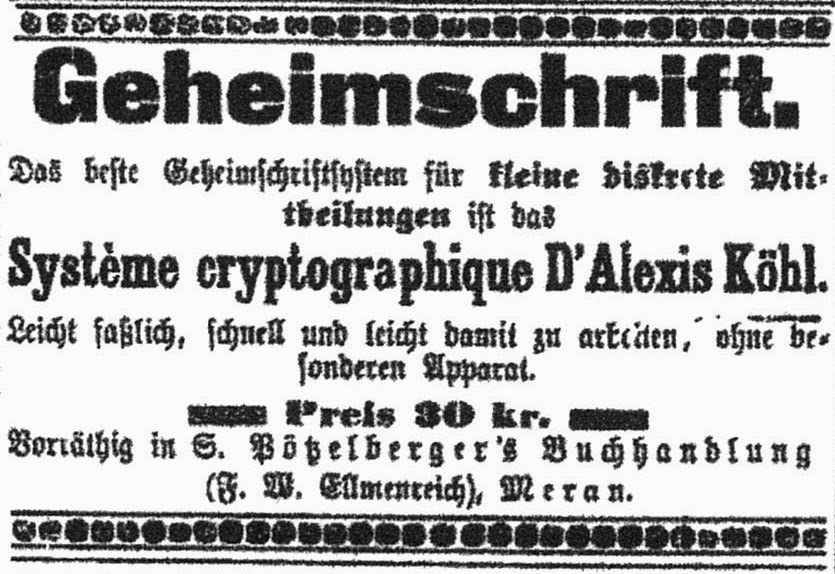 1899 'Secret writing' advert
Niels Faurholt says "Alexis Køhl’s first automatic cryptograph was presented in 1883 ... The cryptograph was constructed on the basis of Danish inventor Rasmus Malling-Hansen’s writing ball and largely inspired by Malling-Hansen’s patent  application from July 1870.
"Here the visionary Malling-Hansen had listed a number of potential uses for the writing ball ...  Among these ... was the sketch of a cryptographic model, where the ball itself with the letter keys could turn in relation to the print rods,  so that each plain text letter could be replaced  by eight different cryptosigns. We do not know whether any cryptograph was actually constructed based on this principle, but further work would have been necessary if it should be used operationally.
"Køhl took over the  principle of the revolving ball and developed an operationally usable cryptograph. We must assume that Køhl was authorised to use Malling-Hansen's principle, but we have no firm evidence of that."

Posted by Robert Messenger at 00:36

Sounds like it would be a pretty easy code to crack at least by today's standards.